With no run-off areas and steep cliffs lining the course, the Spectre 341 Challenge hillclimb race demands respect, not just a fast car. This year's winner, Lou Gigliotti, brought both.

One weekend each year, Nevada State 341, a 5.2-mile stretch of winding road that climbs from Silver City to Virginia City, is closed to traffic for the Spectre 341 Challenge. Driving modified street cars equipped with DOT-approved tires, racers attempt to cover the distance between the two cities as quickly as possible. This year, the fastest entrant was Lou Gigliotti in a ZR1—his daily driver.

Best known as the owner of Corvette tuning shop LG Motorsports, Gigliotti is a veteran professional road racer. Behind the wheel of his flame-festooned yellow and black Corvettes, he’s won multiple World Challenge championships and, up until recently, was competing in the American Le Mans Series. When it comes to hillclimb racing, however, Gigliotti is a rank novice.

His first-ever event of this type was the 2010 running of the Spectre 341 Challenge. The thought of entering such an event had never crossed Gigliotti’s mind. He just happened to read a posting regarding the race 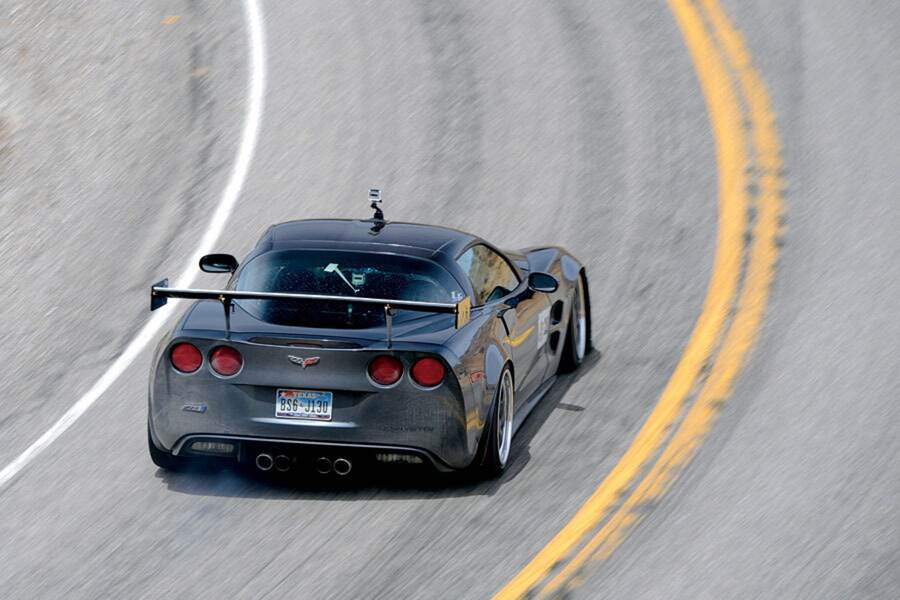 on an online Corvette forum. Spectre Performance, the aftermarket outfit that sponsors the race, had placed an open invitation for a Corvette entry in the 2010 event. Gigliotti took up the challenge; he figured his modified ’10 ZR1 would be the right tool for the job, and that his decades of road racing would stand him in good stead. The Texan was in for a surprise.

“A minor mistake on a road course does not kill you, but here it does,” says Gigliotti. “You gotta respect the mountain; it’s a dangerous place.” Though drivers are able to use both side of the road, there are no run-off areas like on a racetrack, and much of the course is cliff-lined and bereft of guardrails. Getting a corner wrong doesn’t mean a trip through the gravel trap; instead, it could mean the end of your life. That’s the fate that befell Alexander Djordjevic in the 2010 event, when the 37-year-old entrepreneur lost control of his 2001 Porsche 911 Turbo and plunged off the side of the side of mountain.

“I don’t have a death wish,” says Gigliotti, which is why he took a very conservative approach to learning the course. He did seven or eight runs up the hill just to figure it out, and got a ride in a competitor’s car, a Griggs Racing Mustang, to better acquaint himself with the course. By the end of the race weekend, he had gone up the mountain a total of 13 times, but still didn’t feel like he had the course wired. “There are just too many blind corners,” says Gigliotti. He learned from more experienced hillclimbers to take risks only on left-hand bends, where there is usually a rock wall to run into, and to play it safe on the right-handers, where there is nothing to arrest a slide off the cliff. Comfortable or not, Gigliotti set the fastest time—3:21.7. 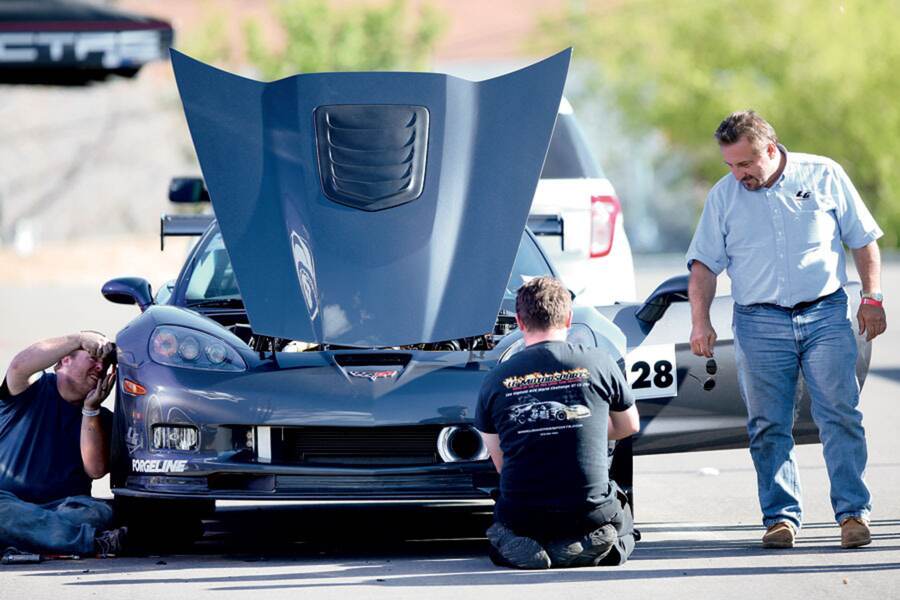 In 2010, Gigliotti’s ZR1 was surprisingly stock. It had been lowered about an inch using his company’s drop spindles. He left the standard Magnetic Ride Control shocks in place, finding no need to replace them. As for rolling stock, Gigliotti went with Hoosier autocross tires. This DOT-approved rubber was so wide that it required Forgeline wheels with custom offsets in order to fit under the stock fenders.

With the LS9 already developing 638 horsepower, Gigliotti didn’t feel the need increase the engine’s output dramatically, so he was content only to add a set of his company’s Super Pro Longtube Headers. The stock mufflers were left in place since they are bypassed at high rpm, anyways. To allow the engine to rev more freely, a custom lightweight flywheel was bolted on. More weight was shed through the installation of an ultra-light Tilton three-disc carbon clutch; it weighs a mere 65 pounds. Gigliotti admits this grabbier unit demands the driver “pay attention.”

Something that will definitely grab the attention of those outside the cockpit is the car’s huge rear wing. It is essentially the same device that Gigliotti used on his ALMS race car. Up front, he bolted on a longer-than-stock splitter in the hopes of balancing downforce front to rear. Despite these aero appendages, the Corvette was still very much a road car, not a race car. Accordingly, it wasn’t fitted with a roll cage, a fuel cell or a plumbed fire extinguisher. 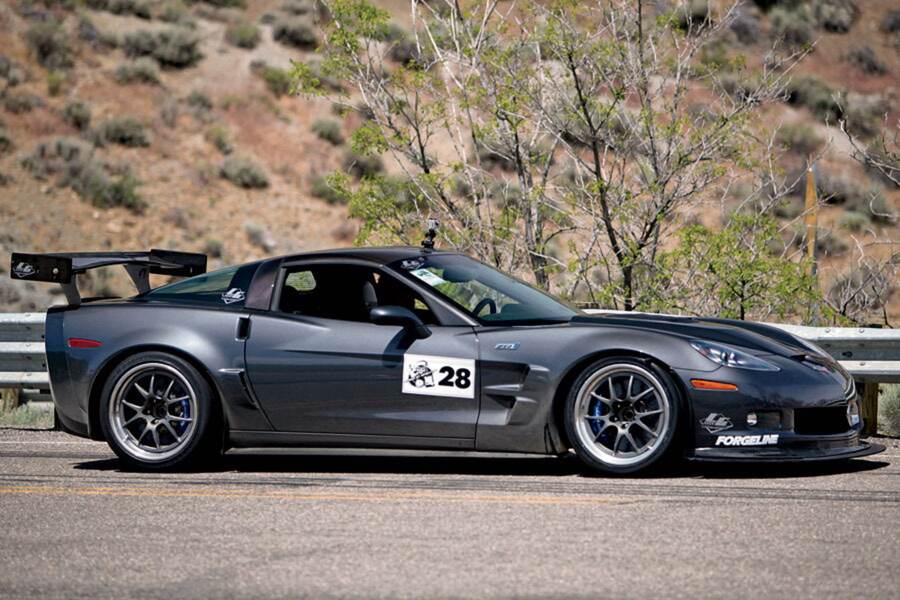 For the 2011 race, Gigliotti returned with a further modified car. He was able to extract another 100 horsepower from the engine by installing a hotter cam, porting the heads and installing a different supercharger pulley to raise the boost pressure. He claims the LS9 now pumps out 760 bhp at the rear wheels.

On the chassis front, Gigliotti swapped out the suspension’s standard sway bars for a pair of stiffer ones that feature adjustable end links. Though he again chose to retain the ZR1’s stock springs and shocks, he did replace the suspension’s rubber bushings with harder, polyurethane ones. At the time, these parts were in development—the ZR1 serves as an LG Motorsports test mule—but now they are offered for sale to the public. The wheel and tire package remained the same, but Gigliotti optimized their effectiveness in 2011 by using tire warmers to bring them up to optimum temperature before each run.

Gigliotti also worked to better balance the car’s aerodynamic downforce. In 2010, the ZR1 had too much front-end stick and not enough in the rear. Using a local racetrack for testing, Gigliotti adjusted the rear wing until he got the downforce he was looking for. This shifted the car’s handling balance toward mild understeer. “This is not what I would want at a racetrack,” says Gigliotti. “It’s not the fastest setup, but that’s the point: Hillclimb racing is different.” 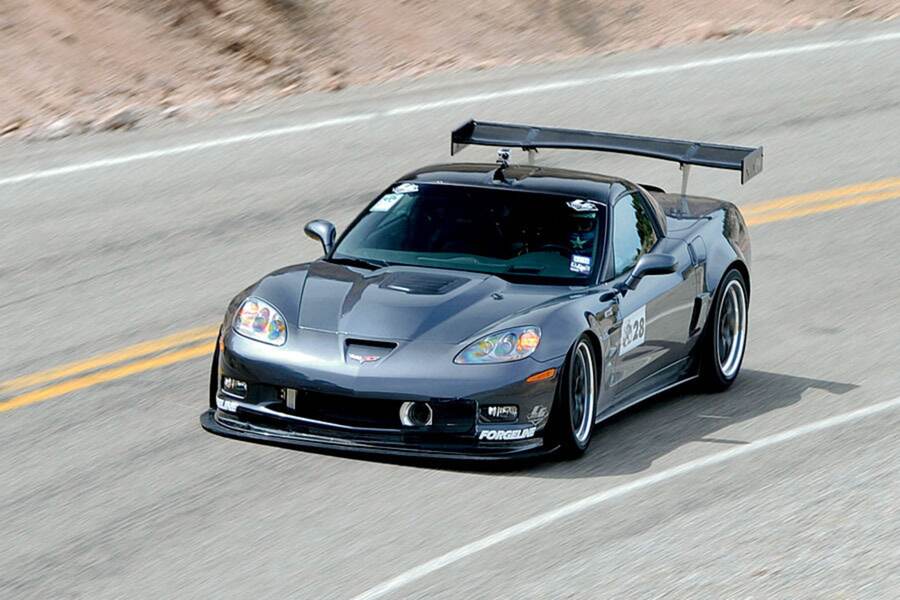 Though Gigliotti took a cautious and incremental approach to preparing for this year’s hillclimb, he wasted very little time coming up to speed. In just his third run up the mountain, he set a time of 3:14.4—7.3 seconds faster than his winning run in 2010. This was on the morning of the first day, and with air temperatures rising rapidly, Gigliotti elected to wait until the second morning to improve upon his time. He knew he could go faster, especially through some of the sweepers at the end of the long straights where he was hitting upwards of 150 mph. The problem was knowing which ones, as the sameness of the terrain made it difficult to distinguish individual corners. (Watch the YouTube clip of the run, and you’ll know exactly what he’s talking about.) In other words, Gigliotti still didn’t feel like he had the course memorized, nor had he grown any more comfortable with the steep drop-offs and lack of guardrails.

Despite these hurdles, Gigliotti found extra speed the next morning. On his best run he was on track to set a 3:12—that is, until a Camaro driven by Aaron Pfadt crashed into a cliff wall. (Fortunately, he overcooked a left-hand corner, not a right-hand one.) When Gigliotti’s ZR1 came on the scene it was travelling at 120 mph. “I slowed down, but did not have time to stop,” says Gigliotti. “I passed him with an inch on both sides.” His fast run was ruined.

Not surprisingly, Gigliotti parked his Corvette after that. However, he was able to rest on his laurels: His time from the previous day proved to be the fastest of the weekend, making him and his Corvette the winners of the Spectre 341 Challenge for the second year in a row.

Gigliotti plans to come back again in 2012. He’d like to take 100 pounds out of the car, further tweak the aero setup and perhaps install closer-ratio gearing combined with an EMCO sequential shifter. That said, he has no intentions of relieving his ZR1 from its daily driving duties. Though Gigliotti is considering entering other hillclimb events, this racer still prefers his courses closed, with large run-off areas and fewer corners. 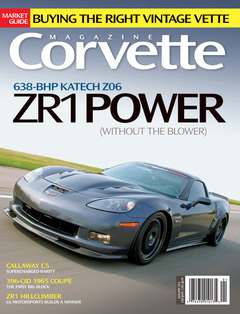