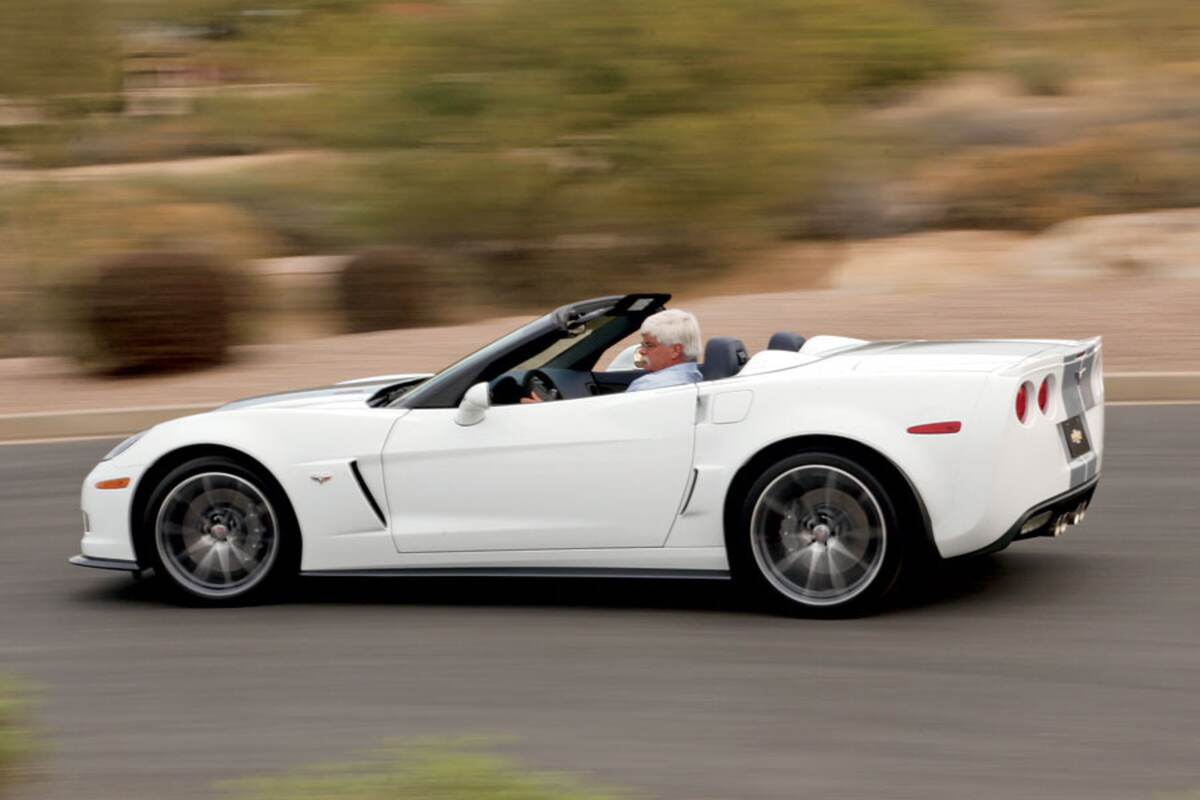 CHEVROLET IS CELEBRATING THE SIXTH-GENERATION CORVETTE’S final year in production by offering a unique model: the 2013 Corvette 427 Convertible Collector Edition. “We wanted to do something really special, something we had never done before,” says Corvette Product Market Manager Harlan Charles of Chevrolet’s decision to build the 505-horsepower car, the most powerful convertible the carmaker has ever offered. The 2013 model year also marks the Corvette’s 60th anniversary, and Chevy is marking the occasion by offering an optional 60th Anniversary Package. Combine these two celebrations, and you get the car on these pages.

It’s been a long time since Chevrolet offered a Corvette convertible with a high-output engine. In 1996, convertibles could be had with a 330-horsepower LT4 V8, and in 1974 it was possible to combine a canvas roof with an optional 454-cubic-inch big-block V8 putting out 270 horsepower. But the engines in these convertibles offered only modest power gains over the standard V8s. The last truly high-output Corvette convertibles were the 427-engined examples offered between 1966 and 1969—over 40 years ago (see sidebar). These are some of the most desirable Corvettes ever made—they perennially bring six-figure prices at auction—which is why, says Charles, Chevy wanted to offer a 427 convertible today.

Corvette enthusiasts have been clamoring for a high-output convertible for as long as it has been absent from the lineup. There were calls for softtop versions of the fourth-generation ZR-1 and fifth-gen Z06, and the cries have been even louder for a convertible version of the sixth-gen Z06, especially since it is powered by a 427-cubic-inch V8. Charles acknowledges that the ’13 427 Convertible can be seen as an appeasement of such long-standing demands. However, he is quick to point out the new model is also a way for Chevy to expand into the high-output convertible market and compete with such cars as the Porsche 911 Turbo S Cabriolet, Audi R8 5.2 Spyder and Ferrari California. 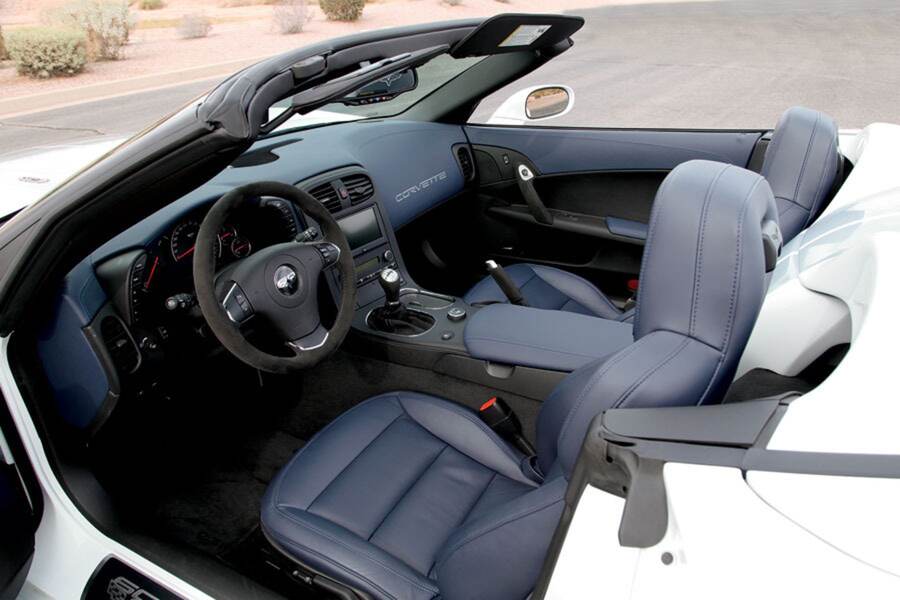 Under the 427 Convertible’s hood lies exactly the same 7.0-liter LS7 V8 used in the Z06 coupe. Indeed, the new model’s Magnetic Ride Control shock absorbers, brakes and six-speed manual gearbox are all Z06 items. However, the 427 Convertible does not use the Z06’s aluminum frame; it utilizes the steel one shared by the base and Grand Sport convertibles. In other words, the new model is not a droptop Z06, which may prove disappointing to some enthusiasts.

The decision to go with the steel frame basically boiled down to money. Though technically feasible, re-engineering the Z06’s aluminum chassis for a convertible application would have been cost-prohibitive, especially considering the expenses could only be amortized over a single model year. It just didn’t make sense to go this route. The Grand Sport convertible chassis was ready to go, and as anyone who’s driven one knows, it can handle a lot more power—certainly an additional 75 ponies.

But the 427 Convertible is not merely a Grand Sport Convertible with an LS7 powerplant, as Chevy went to great lengths to reduce mass in an effort so offset the weight of the steel chassis, as well as the new model’s long list of standard features. In addition to fitting Z06-style carbon-fiber front fenders, the new model comes standard with an ultra-lightweight carbon-fiber hood—the same one that is optionally available on the Z06. To further shed pounds, carbon-fiber floor panels from the Z06 and ZR1 are used. As a result of all these lightweight parts, the 427 Convertible tips the scales at a reasonably svelte 3,355 pounds—about 44 pounds more than a Grand Sport convertible. While 156 pounds heavier than a Z06, the new model is just 22 pounds heavier than a ZR1. One of the reasons Chevy chose not to go with the 638-horsepower supercharged LS9 engine in creating a high-output convertible was weight; the car would simply have been too heavy—in addition to being far too expensive. As it is, the car won’t be cheap: Charles says he’s hoping the 427 Convertible’s MSRP will come in under $100K, but he could make no promises. 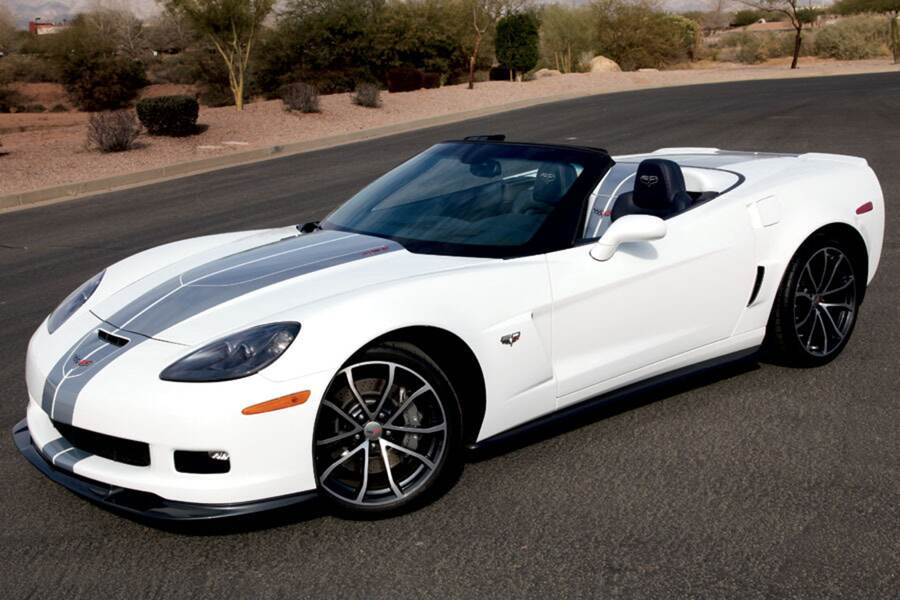 As one would expect, lots of power and low weight translates into high performance. Chevy estimates the 427 Convertible will accelerate from zero to 60 mph in 3.8 seconds, charge through the quarter mile in 11.8 seconds and hit a top speed of over 190 mph. These figures are nearly identical to what the Z06 generates; it posts a 0-60-mph time of 3.7 seconds, runs through the quarter in 11.7 seconds and reaches a terminal velocity of 198 mph.

Because of its superior power-to-weight ratio, the 427 Convertible should outperform its aforementioned competitors. Each of its 505 horses is tasked with propelling only 6.64 pounds of vehicle mass, and while the Porsche 911 Turbo S Cabriolet’s 6.90 power-to-weight ratio comes close, the Audi R8 5.2 Spyder’s ratio is well off the mark at 7.58 and the portly Ferrari California’s figure is worse yet at 8.31.

But low mass doesn’t only translate into high performance, it also helps reduce fuel consumption. Chevy estimates that the 427 Convertible will receive a 15/24 mpg (city/hwy) rating from the EPA—exactly the same numbers the Z06 achieves. This means no gas-guzzler tax will be levied, something buyers of the European sports cars are going to have to cough up. 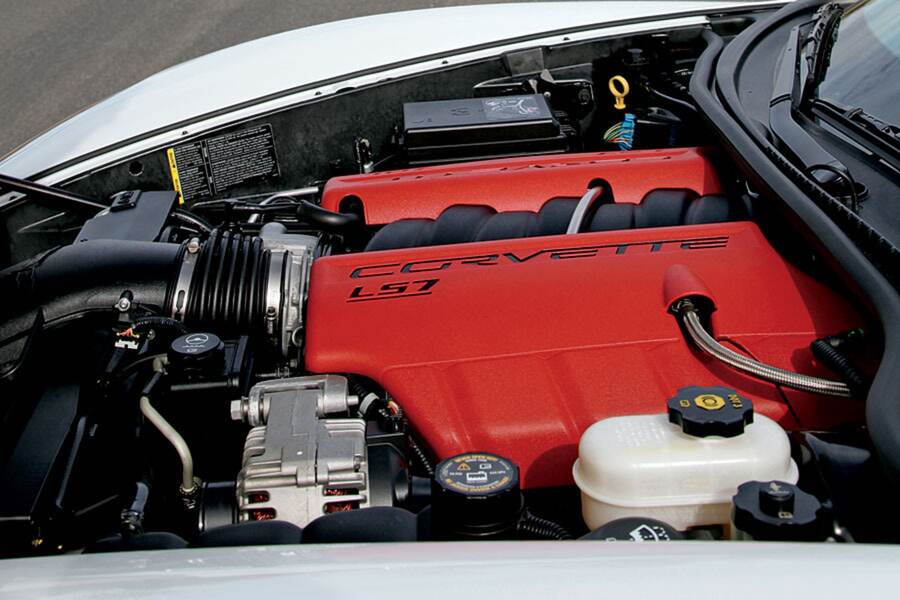 When it came to selecting the 427 Convertible’s running gear, Chevy cherry-picked some of the best items in the Corvette parts bin. Its 19- and 20-inch wheels, for example, are the special lightweight alloys found on the Z07-equipped Z06 and the ZR1 with the PDE performance package. However, the 427 Convertible wheels receive machine facing, giving them a unique luster. (These wheels can also be ordered with an all-black finish; polished ZR1-style wheels are available, as well.) Instead of the Z06’s standard Goodyear Eagle F1 Supercar G:2 tires, the 427 Convertible is fitted with Michelin PS2 tires—standard-equipment rubber on the ZR1.

In terms of suspension tuning, the 427 Convertible is not as stiff at the Z06. Its spring rates, shock valving and anti-roll bar diameters are closer to those found on the Grand Sport convertible. “We wanted it to be more of a road car than a track car,” explains Charles. That said, the model’s roadholding capabilities are still extremely high. It generates 1.04 g of lateral acceleration, a figure that places the 427 Convertible among the world’s highest-performing supercars.

There’s no doubt about it, the Corvette has come a long way since its debut, making the car’s 60th birthday a milestone worth celebrating. According to Charles, the 60th Anniversary Package’s Arctic White exterior color was chosen not only because the original ’53 show car was white, but because it is a traditional color that has been offered every model year. However, instead of pairing a white exterior with a red interior—as was used on the Motorama show car—Chevy decided to do something a little different. The option group’s interior has Blue Diamond leather upholstery, and convertible models feature a matching blue top. 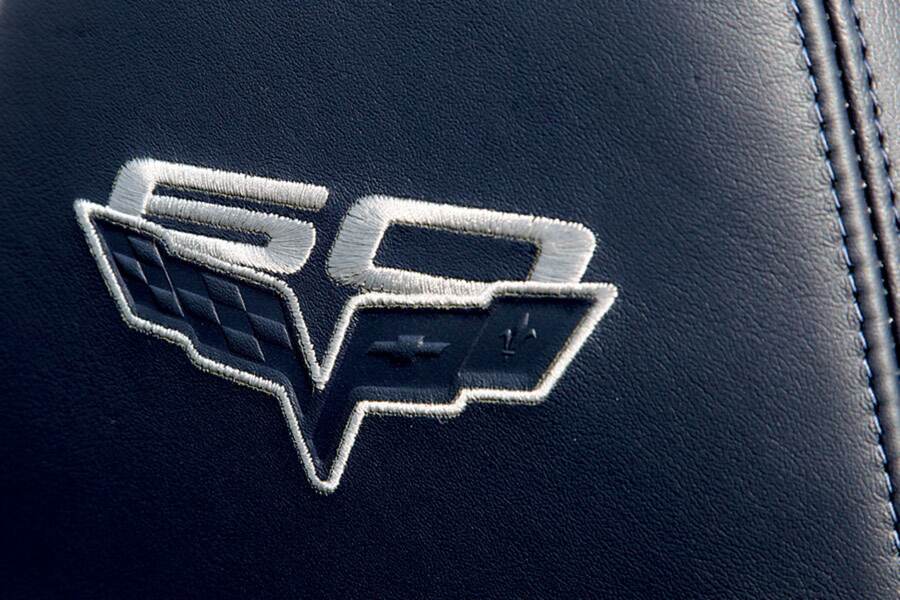 The pre-production vehicle you see here does not have the correct roof. We wish it did because we could then show you what Chevy is calling a “tonal stripe,” a dark strip of fabric stitched into the top that lines up with the optional Pearl Silver Blue racing stripes. Up until now, Corvette convertible tops have interrupted such stripes because they were constructed of a single-color fabric—think ’96 Grand Sport Convertible.

Other 60th Anniversary Package features include suede upholstery on the steering wheel and shift lever, an embossed logo on the headrest and various special badges, as well as a full-width, body-color rear spoiler and gray-painted brake calipers. The 427 Convertible gets a few 60th Anniversary items all its own: a carbon-fiber front splitter and carbon-fiber rocker panels, both borrowed from the Z06’s CFZ option package.

It looks as though the 2013 model year will be the end of the road for the large-displacement Corvette V8. In the near future, stricter Corporate Average Fuel Economy regulations will make it very difficult to bring such a big engine to market. Cutting-edge technologies such as direct fuel injection will make the next-generation of Corvette engines more efficient while preserving, or perhaps even improving upon output, but they can’t save the 7.0-liter displacement. “This might be the last chance to buy a 427 V8,” says Charles. 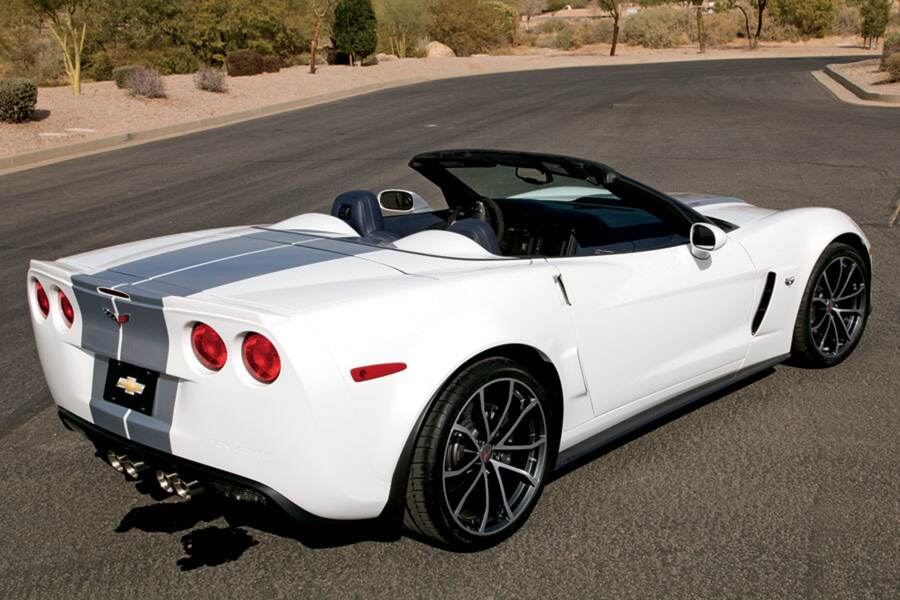 While the 427 Convertible is not officially a limited-edition model, and Chevy has no specific number of cars that it intends to build, there are nevertheless enough production constraints, such as the LS7 engine being hand-built, that demand will likely outstrip supply when production begins this summer. No matter how many 427 Convertibles are assembled, it’s destined to become a classic. 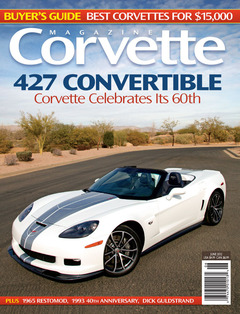