With an 800-horsepower engine, race-ready suspension and lots of lightweight carbon fiber, this C6 Z06 has all the bases covered. 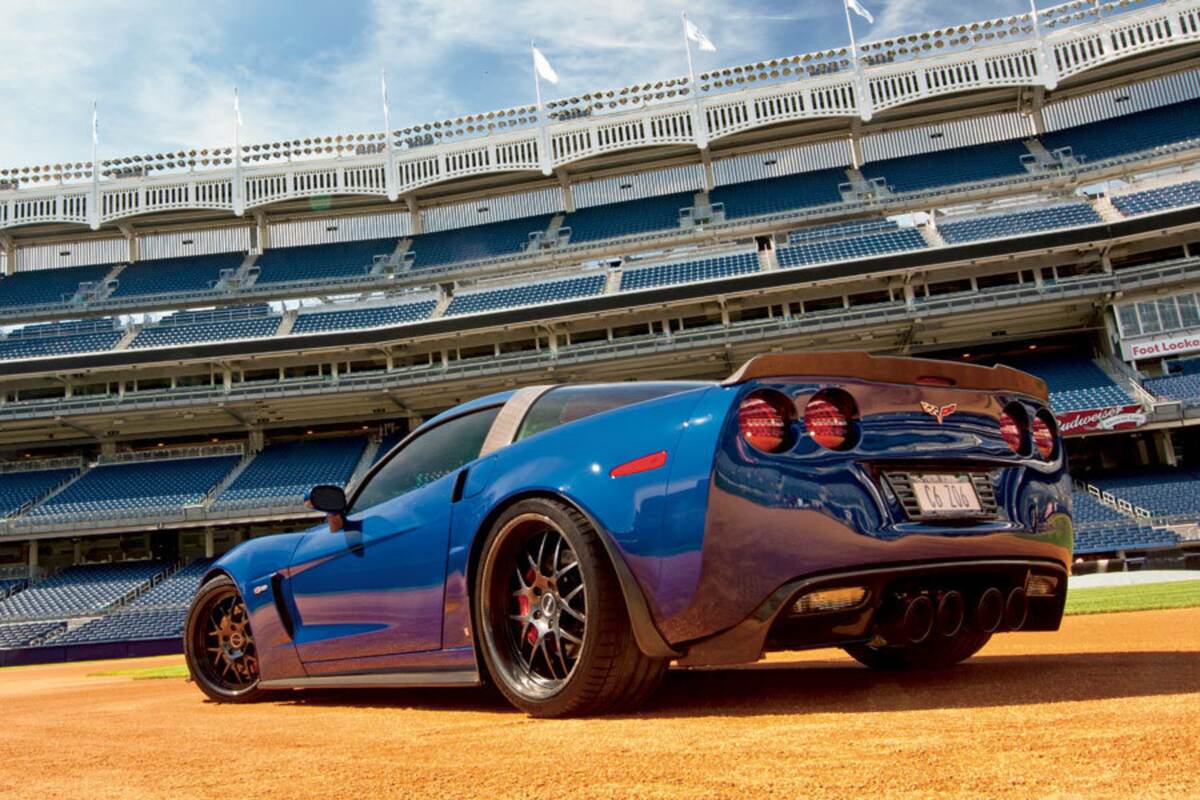 When the Corvette bug bites, it usually leaves a lasting impression. Just ask Sonny Hight, owner of the 2006 C6 Z06 on these pages. Why this heavily modified machine is parked on the infield of Yankee Stadium will soon become clear.

Hight joined the New York City Police Department in 1969. Over the years he steadily rose in rank, eventually becoming First Grade Detective in the Intelligence Division, where he gathered information on organized crime outfits. He was involved in numerous operations that were often very risky. In the early ’80s, he landed a part-time job dealing with a different group of volatile characters—baseball fans.

He was hired by the New York Yankees on a seasonal basis as part of their game-day security squad. This is where he met Eddie Fastook, a die-hard Corvette owner who inflicted Hight with the Corvette bug. “We became good friends, and Eddie would always talk to me about his collection of Corvettes,” Hight recalls, “which included a number of official Pace Cars. Once I observed his collection, I was hooked.” 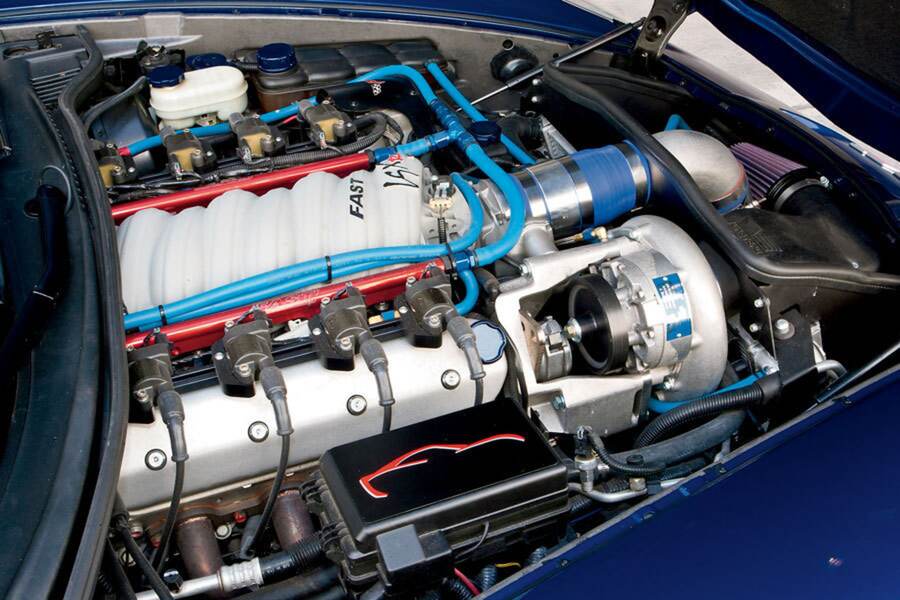 This budding interest with Corvettes led him to buy an ’87, which he regularly drove to work. This car gave way to another C4, a ’92, which he kept until 1996. At that point, he ended up doing what many have been forced to do, which was to trade his Corvette in for a family-oriented vehicle. Professionally, his career also took a different path. His tenure with the NYPD came to an end when he retired in 1992. However, the Yankees gig was still going strong, and in 1995, it evolved into a full-time position when he was promoted to Director of Stadium Operations.

Ten years later, Hight was promoted to Senior Vice President of Operations, which gave him the task of overseeing all security issues for the stadium and the players. It also gave him the authority to drive his Corvette onto the diamond for a photo shoot. The job has its perks.

In 2006, with the Corvette bug still biting away, Hight ordered a brand-new C6 Z06. He was lured to that model because of its performance, and wasn’t disappointed once he took delivery. He was so content with the overall package that modifying it wasn’t even on the radar—at least in the beginning. 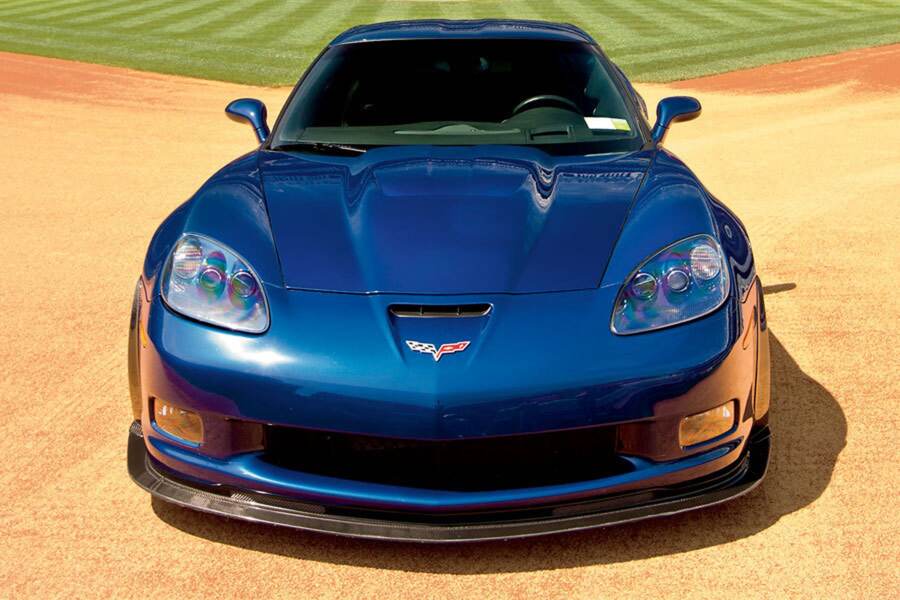 That all changed when Hight met Chuck Mosello, the owner of Corvettes of Westchester. He had been looking for a shop that could handle the maintenance requirements on his car; Mosello’s came highly recommended. Once Hight started bringing the Z06 in for service, he quickly became intrigued by the performance enhancements being done on some of the other Corvettes at the shop. Mosello explained to him exactly what the modifications did, how they were installed and what the expected gains should be. Impressed as Hight was with the 7.0-liter LS7 V8 in its stock configuration, the tantalizing prospect of bumping it up beyond 505 horsepower put a smile on his face. He was also motivated to add some exterior upgrades. That led him to George Gjokaj, the owner of Proformance Industries in New Rochelle, New York.

Consulting with Mosello and Gjokaj, while contemplating the addition of new bits and pieces, became a regular ritual for Hight. It’s worth noting that the transformation on his car didn’t happen overnight. He didn’t cut a check for a pile of parts to be installed in one shot. He took the advice given by both shops and moved very slowly and cautiously with each modification. The transformation process lasted four years.

For the exterior, Hight was particularly fond of the raw carbon-fiber look. As a result, Gjokaj suggested a variety of parts that would complement the C6’s already aggressive looks. The bolt-on pieces ended up being sourced from a variety of different suppliers. The front splitter and rear diffuser were purchased from Advanced Composite Products, while the rear spoiler came from Katech. The side skirts came from APR Performance. The roof’s halo panel, along with the carbon-fiber wheels, was fabricated in-house by Proformance. 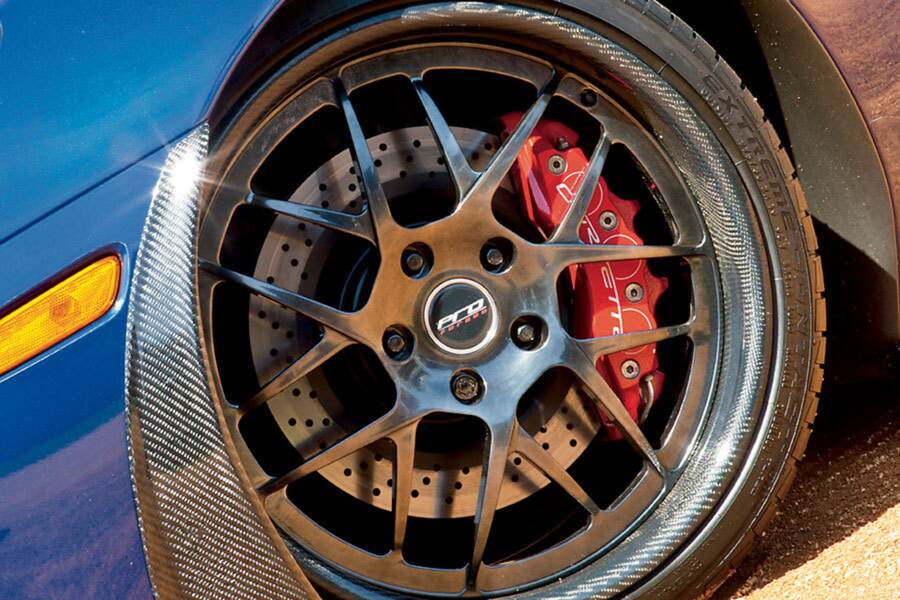 Hight liked the C6RS that Pratt & Miller built for Jay Leno, particularly the wheels. He wanted a set, but decided the design’s center-lock lug would be too impractical for regular street use, as it requires a special tool. Gjokaj is a master at creating custom wheels for his customers, so he ended up designing a set that looked nearly identical to the ones used on Leno’s C6RS, but with a traditional five-lug pattern.

The design process for these wheels, which feature an alloy core and a carbon-fiber rim, began on the computer, then moved to a milling machine for the creation of a prototype. Gjokaj subjected the prototype to a rigorous stress analysis test; over two tons of lateral and radial pressure was applied to verify its structural integrity. Once tests was complete, a full set of finished wheels was created. 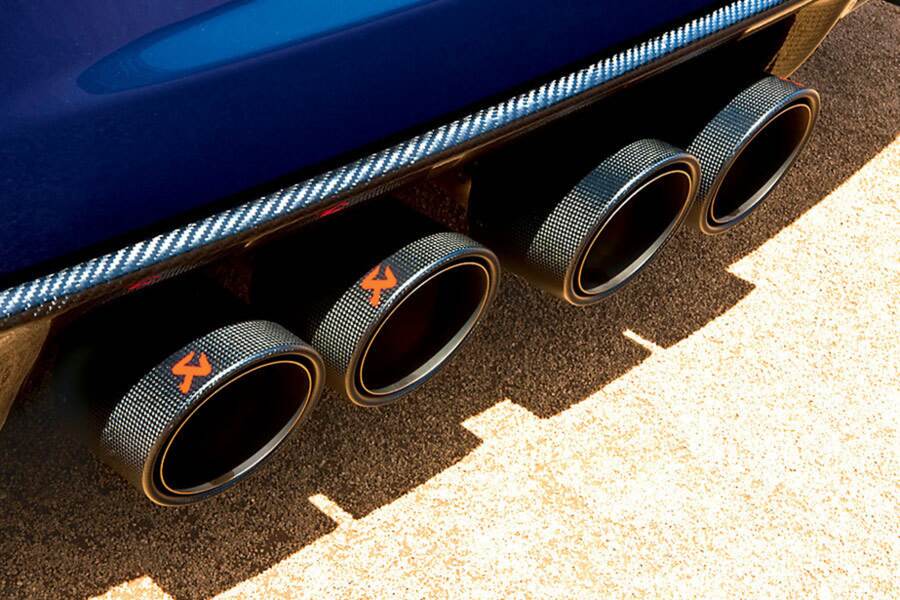 On the mechanical side, Hight was especially cautious with each upgrade decision. He wanted an engine that produced more power without sacrificing real-world drivability. Mosello suggested that the first step should be to improve the Z06’s ability to inhale and exhale.

To reduce back pressure, the stock exhaust was replaced with a Borla Stinger setup. That was followed with the addition of a Vararam Snake Charmer cold-air intake, which was actually not available for the Z06 at the time; Mosello had to fabricate an adapter. “I developed the ‘MAF Bridge,’ which allowed Vararam to use their intakes on the new C6 Z06,” says Mosello. “At the time, no manufacturer offered any cold-air intakes for the Z06, as the vehicle was still very new and production numbers were limited. On Hight’s car, I installed one of the first three prototypes. I hand-made each piece and, after testing a few of them, the prototype eventually evolved into the ‘MAF Adapter’ that Vararam currently uses, and so many other vendors have copied.” Also added were a set of LG Motorsports Pro Long Tube Headers. After all these bits were installed, Mosello performed a dyno tune. The result was just under 550 horsepower at the rear wheels.

At some point, Hight decided the standard 3.42 gears were too tall; he wanted something more aggressive. After some consultation with Mosello, he went with a 4.10:1 final-drive ratio. As with the intake, this was not an off-the-shelf part. “To make this work,” explains Mosello, “we had to completely replace the Z06 diff with a new housing and special side covers and have the 4.10 ring-and-pinion gears specially re-splined and modified to work with the Z06’s larger output shaft.” While they were at it, the shop installed beefier 300-mm billet axles. 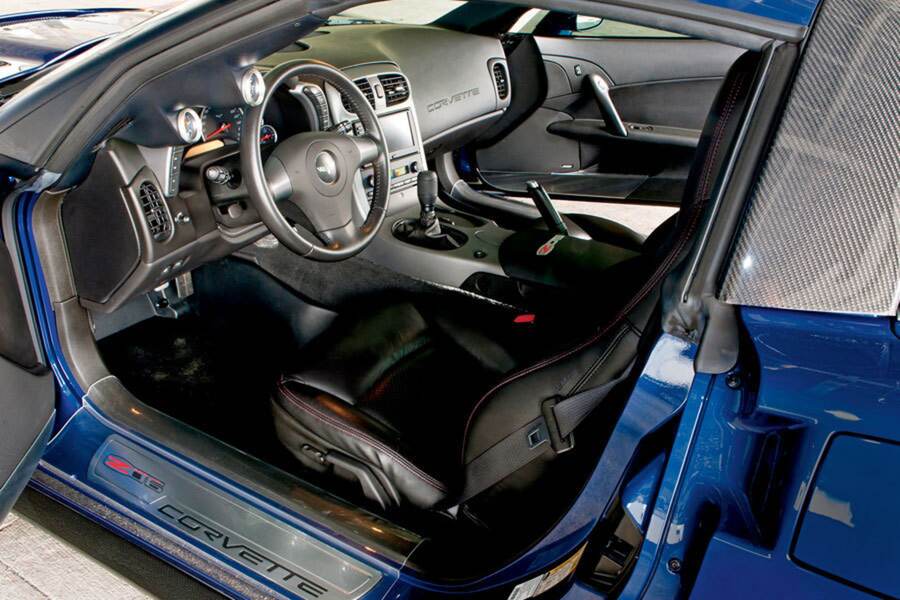 With these mods in place, the buildup of heat became an issue. Hight wanted to be able to use the car whenever he desired, and New York City can be a hot place during the summer months, so an extra-large DeWitts heavy-duty radiator was fitted.

Underneath, the suspension was also tweaked. The original Z06 transverse leaf springs and shocks were replaced with a set of Pfadt coilovers. This lowered the car, giving it a more aggressive stance, while also allowing the rear wheels to be sprung more independently. To reduce body roll, stiffer GM T1 anti-roll bars were installed. A set of Hawk pads gave the brakes a bit more bite. 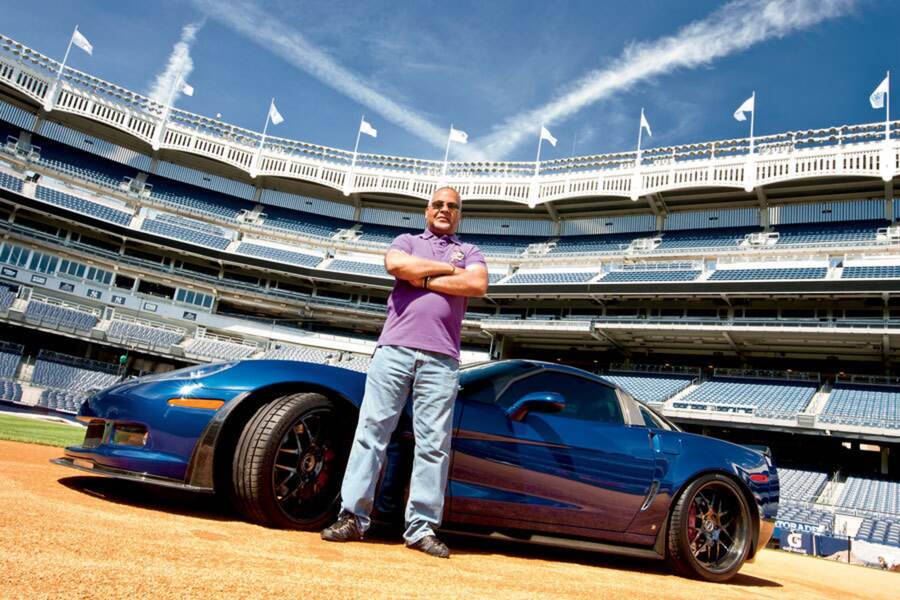 But wait, there’s more! Though the Corvette had nearly 550 horsepower at the rear wheels, Hight still wanted additional ponies under the hood. Mosello recalls the day Hight showed up at the shop with a Vortech supercharger in hand. Mosello asked, “Sonny, are you sure about this?” “Hell yes,” was the response, so the blower went in. As with the rest of the car, this was no bolt-on affair. Mosello ended up customizing the plumbing to permit maximum airflow to the intercooler. The fuel injectors were sent to Georgia-based Fuel Injector Connection for some modifications, which would be critical to insuring an adequate fuel supply. The fueling system was further optimized with the installation of a fully ported FAST 102 intake manifold and a Warlbro fuel pump. To give the engine bay a bit of bling, a pair of Katech aluminum valve covers were fitted, as was Katech’s coil-relocation kit.

Hight’s Z06 now produced a stout 700+ rear-wheel horsepower. It also generated a lot of heat. To help remedy this, the stock hood was replaced by a vented carbon-fiber hood from Motor City.

By now, you’re probably wondering if this project will ever end. Probably not. A Katech ZR1-style aluminum flywheel, a GM ZR1 dual-disc clutch and a ZR1 clutch slave cylinder modified with a remote bleeder were recently installed. A B&M shifter was fitted at the same time. The clutch can now handle upward of 900 rear-wheel horses; perhaps another hint of things to come? The Borla exhaust was replaced with an Akrapovic Evolution system, which is crafted for the most part from titanium, but sports carbon-fiber tips. While it’s hard to say how much horsepower this exhaust system saves, it weighs 25 pounds less than stock.

What’s next? The Z06’s interior is still bone stock save for some extra gauges, so it’s a safe bet that some changes are in store for the cockpit. There are a few additional tweaks to the fuel system being planned, but more horsepower is not a priority for Hight at the moment. He is satisfied for now—until the Corvette bug bites again. 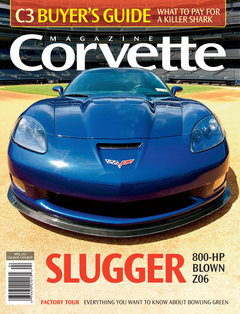