Callaway Cars may be headquartered in Old Lyme, Connecticut, but we travelled to Hastings, Nebraska to sample one of its latest offerings—a 606-horsepower Grand Sport coupe. 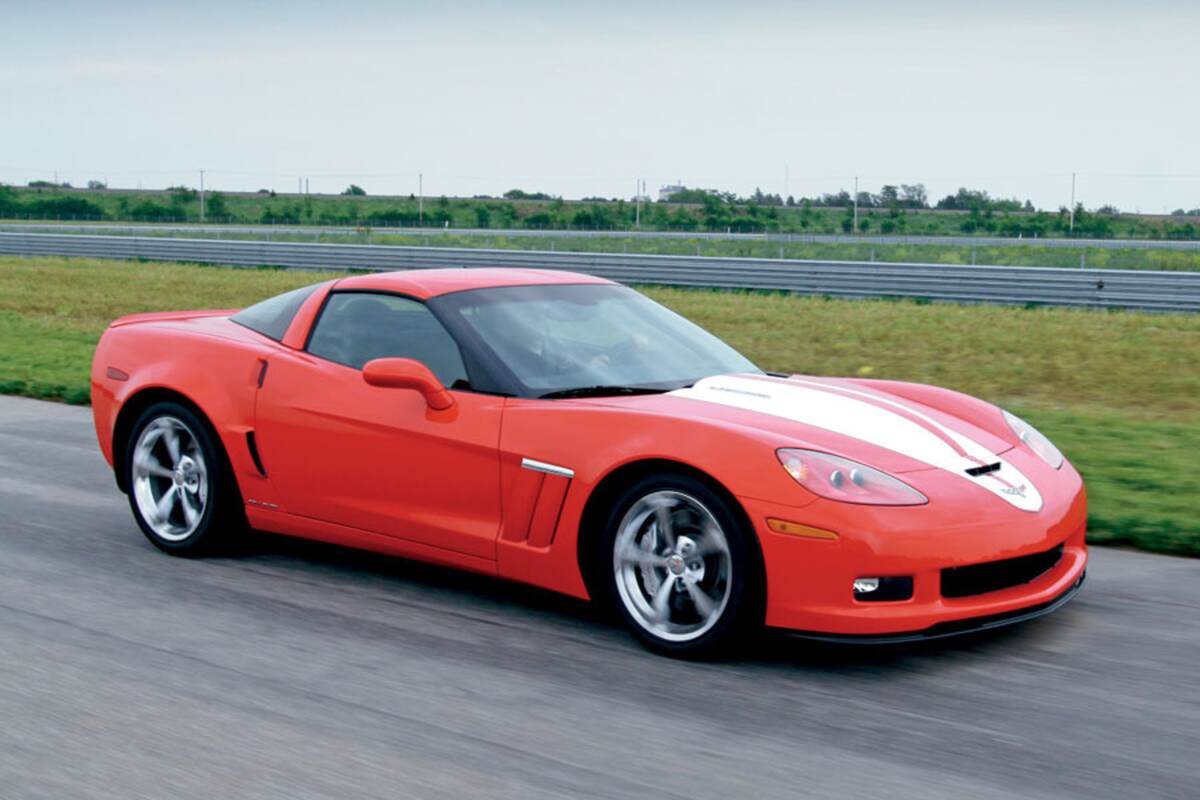 I gave Sid Harchelroad a call, wanting to see if I could arrange a test drive of one of the 2011 Callaway Grand Sport SC606s on the lot of his Imperial, Nebraska Chevrolet dealership. I’d soon be passing through the area visiting family, and proposed meeting at Motorsports Park Hastings (MPH), a relatively new road course in western Nebraska. Little did I know that Harchelroad would roll out the red carpet for me, arranging for over a dozen Callaway Corvette owners to meet us at the track and trailering in a pair of Grand Sports for my lapping pleasure. Turns out, Harchelroad is not only one of the biggest Callaway dealers in the country, but he is also a partner at MPH. I’d made the right call.

When I arrived at the circuit in the morning, the parking lot was already full of Corvettes—Callaway and otherwise—including two ZR1s. I’d never seen so many supercharged C6s gathered together in one spot; the amount of horsepower corralled in the paddock was truly staggering, with one of the Callaway Z06s packing over 700 horsepower under its heavily vented carbon-fiber hood.

Little time was wasted in unleashing all those ponies. After a few words from Harchelroad and MPH’s amiable head honcho, George Anderson, we were let loose on the track. Officially, we were to maintain a “parade-lap pace,” but the grin with which that phrase was uttered seemed to suggest more speed would be allowed. Before I could climb into the driver’s seat of the red 2011 Grand Sport coupe I had chosen to test drive, I was informed that a local hot-shoe driver was on hand to provide me with some orientation laps. Red carpet, indeed. 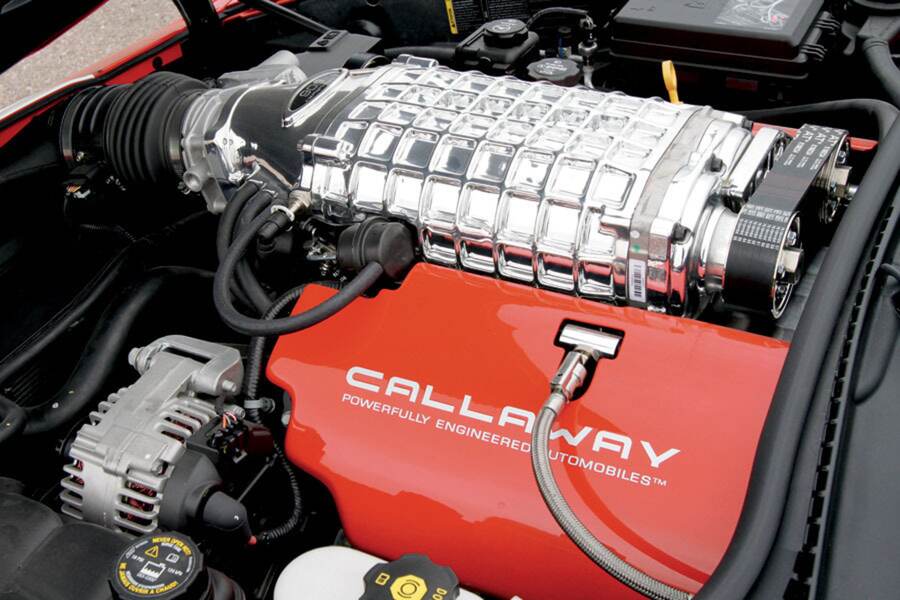 Ted Hughes owns a lot of fast cars. In addition to a C6 ZR1 and a supercharged Callaway Camaro, he has a track-prepped Dodge Viper in his stable. Though not a professional driver, Hughes’ speed around the MPH track has earned him the respect of seasoned racers. The tall, lanky Seward, Nebraska resident escorted me to a silver Callaway Grand Sport SC606. In addition to its 606-horsepower supercharged LS3 engine, this Corvette was loaded with optional Callaway equipment, including Eibach suspension, Michelin Pilot Sport-shod O.Z. wheels, huge cast-iron brakes, heavily bolstered fixed-back bucket seats and a thicker steering wheel. It was clearly the right machine for the job.

Hughes got right to work. The Corvette felt absolutely planted through the 2.2-mile track’s 14 corners, exhibiting hardly any body roll. Though the car wasn’t being pushed to the absolute limit, I was still glad for the sports seats, as I was being held in place with a sense of security that the standard Corvette seats simply cannot afford. Interestingly, Hughes much prefers this car’s handling to that of his ZR1; he finds the latter simply too soft for serious track work, even with the shocks set in their sport setting.

With the number of cars on track and the varying skill levels of their drivers, Hughes was only able to really uncork the engine a few times, but when he did, the Grand Sport accelerated with near-ZR1 intensity. My, what a difference an extra 176 horsepower makes. Though audible, the whine from the Eaton TVS2300 supercharger is fairly muted; the glorious roar from Callaway’s low-restriction exhaust system leaves a more lasting impression. If the supercharger specification sounds familiar, that’s because it’s the same one found on the ZR1’s 638-horsepower LS9 engine. Considering the fact that Callaway’s $21,395 SC606 package is a fully warranteed (three-year/36,000-mile), bolt-on affair—it includes a liquid-to-air intercooler, high-flow fuel injectors, a high-volume fuel pump and a cold-air intake—its 32-bhp deficit is entirely understandable. 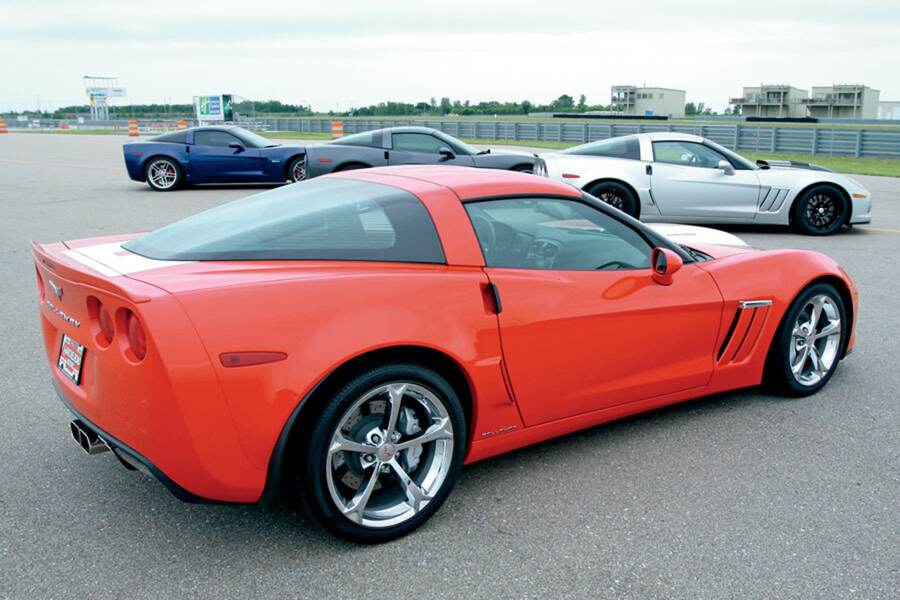 With Hughes’ hot laps completed, it was my turn to take the wheel. I had chosen to review the red coupe because I felt it was more representative of what the average Callaway Corvette customer orders. Not many folks request the coil-over suspension and monster brakes, and this car’s suspension and brakes were stock. And instead of a manual transmission, it was equipped with an automatic—a popular option. Though its wheels were standard Grand Sport issue (with the optional polished finish), this car was thankfully fitted with the ultra-supportive Callaway seats. Costing a cool $8,970, they don’t come cheap.

Before heading out, the two main questions on my mind were: How would the stock Grand Sport suspension and brakes handle the significant increase in horsepower? And second, how would the automatic transmission perform in concert with the supercharged engine? I was fairly confident that the Grand Sport underpinnings were up to the challenge; after all, they are nearly identical to those found on the 505-horsepower Z06. As for the transmission, I had my doubts. I’ve driven other supercharged C6 automatics, including a Callaway C16, in which the gearbox and the engine seemed to speak different languages. Admittedly, these cars featured early examples of Chevrolet’s paddle-shift transmission that were slow to heed commands.

It took me only a few corners to discover that Chevy’s automatic and Callaway’s SC606 package make a fine pairing. Left to its own devices, the transmission performed well, holding gears long enough to enjoy the full breadth of the supercharged engine’s powerband. However, I wished the transmission would downshift more aggressively in full automatic mode. For this reason, I much preferred using the paddles on track. My pushes and pulls were met with rapid up- and downshifts. 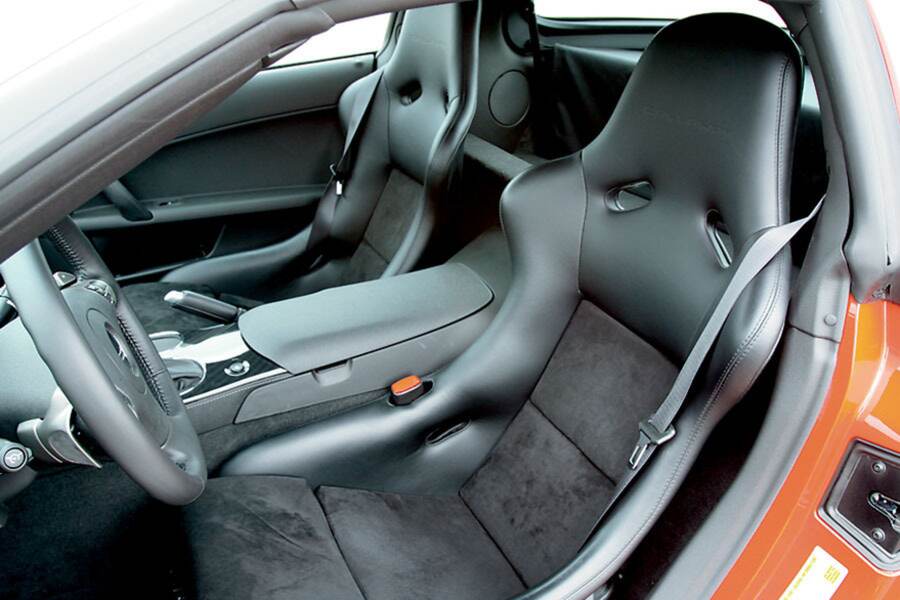 The red Grand Sport felt no less rapid than the silver one I had been chauffeured around in. This is one fast Corvette: It simply inhaled the track’s short straights, careening into triple-digit speeds with almost frightening urgency. Thankfully, traction was not a problem, allowing me to get hard on the throttle even out of the slow corners. The SC606 engine doesn’t have as much high-rpm pull as an LS9—Callaway’s SC652 package, with its electronic fuel-pump controller, apparently has more top-end power—but that hardly constitutes as a demerit.

When it came time to scrub off speed, the Grand Sport’s Z06-spec brakes were up to the task, providing rapid retardation and solid pedal feel. The pedal remained firm throughout my time on the track, but I wouldn’t want to subject the brakes to repeated hot laps, especially with the standard brake pads.

As for the suspension, I’m pleased to report that it performed admirably. Sure, the car exhibited a bit more lean in the corners than the coil-over-equipped Grand Sport, but the handling balance remained pleasingly neutral. The additional weight of the supercharger and its related hardware doesn’t cause understeer to rear its ugly head; the car still turns in with satisfying immediacy. 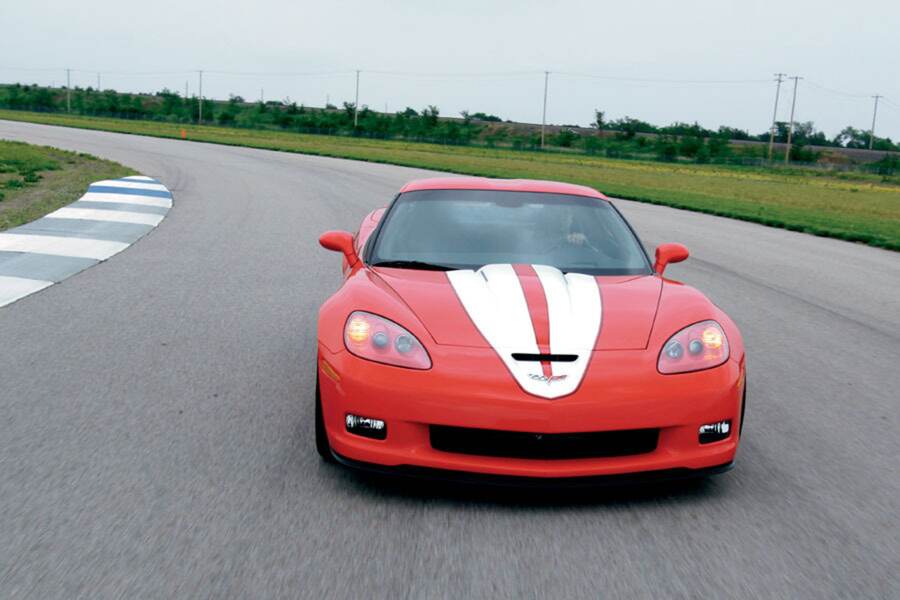 The stock Goodyear F1 Supercar tires are probably the car’s weakest link. Though they still allow for extremely high roadholding limits, stickier rubber would definitely be welcome on track. Automatic-equipped Grand Sports can’t be ordered from Chevrolet with the much better-performing second-generation (G:2) version of the tire, which is a bummer. Prospective customers who plan on taking part in more than the occasional track-day event would be advised to purchase upgraded rolling stock.

Knowing that Harchelroad Motors was still looking for a buyer of this untitled Grand Sport—its Harchelroad-applied white stripe atop the optional Callaway C16 hood should appeal to Nebraska Cornhusker fans—I headed into the pits. Right on my tail was a white Grand Sport convertible. The car had loomed increasingly large in my rearview mirror during my last lap; its driver obviously knew his way around the circuit and wasn’t afraid to hammer his Callaway.

That driver was Scott Bartels, who had driven out from Lincoln, Nebraska for the day. Bartels is a longtime Corvette enthusiast, and a serious C4 afficionado. To finance the purchase of his new Grand Sport, he sold off four of his C4s. The one he kept was an ’87 Callaway twin turbo, the second B2K-optioned car ever made. The idea of owning the original Callaway Corvette offering and the latest appealed to Bartels. “I wanted to own the alpha and the omega,” he said. 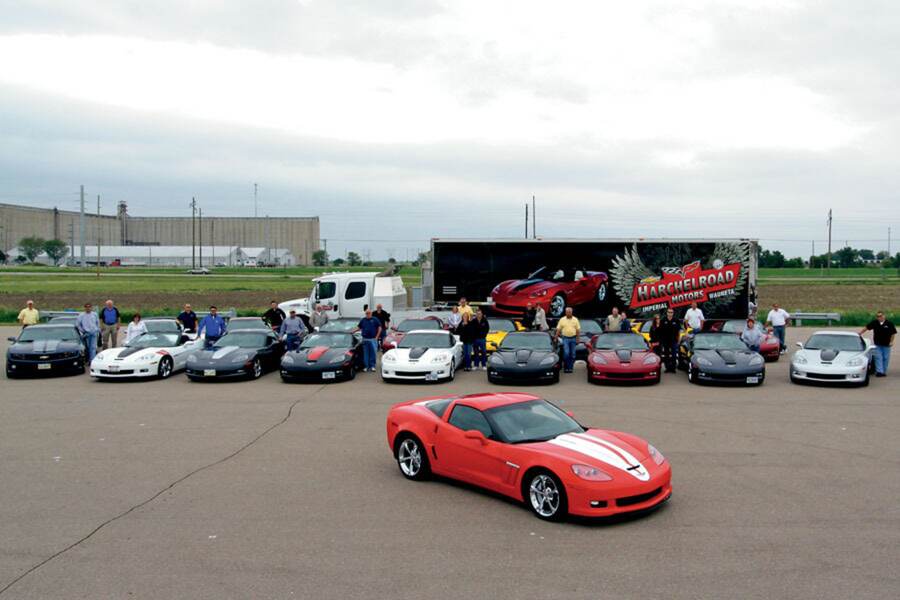 Bartels purchased his automatic-equipped ’10 Grand Sport convertible off the Harchelroad Motors lot in June 2010. The car was then shipped to Callaway in Old Lyme, Connecticut to have the SC606 package installed. Bartels took delivery of the completed machine two months later. “I’ve been ecstatic with it,” said the proud owner.

Part of a Callaway Corvette’s appeal for Bartels is the fact that “it’s not mainstream.” He said that most people aren’t familiar with the brand. Another factor influencing his purchase was the fact that he could get a high-horsepower Corvette convertible with an automatic transmission—a combination that Chevrolet doesn’t offer—while still having a warranty. Of course, the Callaway’s performance was a big factor, too. “You’ll run out of guts before you run out of car,” he enthused.

Over the course of his first nine months of trouble-free ownership, Bartels says that the Callaway Grand Sport has renewed his enthusiasm for the Corvette hobby. “I had stepped back, big time,” said the formerly active club member. Since purchasing the car, he’s completed a driving school at MPH and returned to the track on a monthly basis. “I get treated like family out here,” said Bartels.

As it turned out, the timing of my visit to Hastings, Nebraska couldn’t have been better. A good number of the Corvette owners on hand were farmers, and they informed me that they had just managed to plant their soybeans a few days prior, allowing them the opportunity to take some time off and enjoy their cars. It was a pleasure to join them in this pursuit, especially with a Callaway Grand Sport SC606 at my disposal. 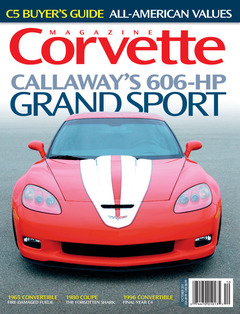