Sure, it's obvious this is no ordinary '65 convertible, but an LS9-equipped monster with 748 horsepower? 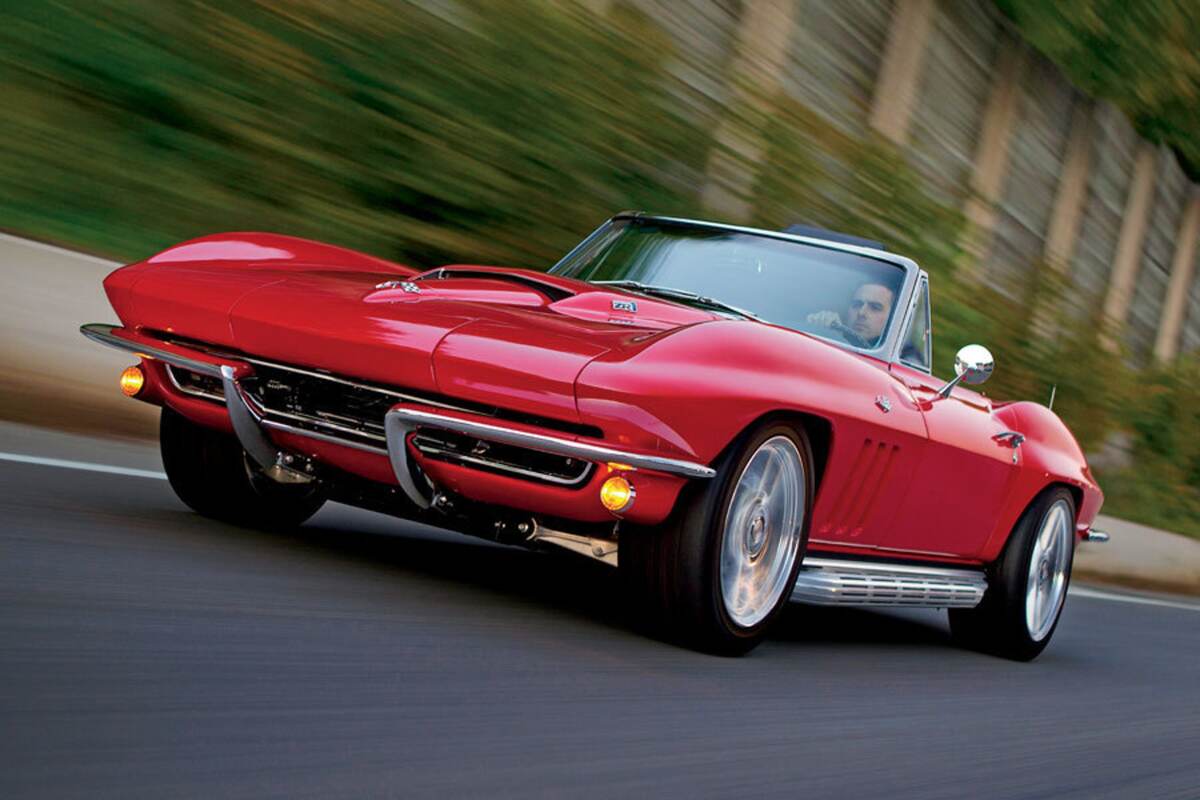 After several decades of very intense involvement in the Corvette hobby, I have excellent advice for anyone contemplating an extensive restoration or restomod project: Sit down with a blank note pad, a half dozen sharp pencils with good erasers and a bottle of aspirin to ease your impending headache. Next, very carefully calculate the cost for each and every part you’re going to buy, then figure the time required for each and every thing you’re going to have done. After you complete your exhaustive analysis of exactly how much time and money the project will require, take each resulting figure and double it to arrive at a reasonably accurate estimate. Hopefully the aspirin works.

The fact that a complete car build or rebuild normally takes twice as long as most people think, and therefore costs twice as much money, was a primary motivator for longtime car collector Daniel Ferrara when he founded Long Island Collector Car Garage (LICCG) in 2006. He envisioned a facility that would build top-level one-off restomods in less than a year, not several years, as is the industry norm. As a result, labor costs could be better contained. To accomplish these goals, Ferrara brought together a small, intensely focused group of fabricators, paint and body specialists, and engineer/technicians who would work on no more than two cars at a time. By bringing the right people together under one roof and strictly limiting the number of projects going on at any one time, Ferrara gave his staff the tools needed to stay completely focused—and that has meant increased efficiencies and a streamlining of the whole process.

The restomod featured here is a stunning validation of Ferrara’s vision of a highly efficient company that can build custom cars quickly. The car began life as an Ermine White/black vinyl interior 1965 convertible with a base engine, two-speed Powerglide automatic and no options to speak of. By the time Ferrara bought it, the nondescript Corvette had a replacement 327-cid engine and was slightly tired but still roadworthy. Ferrara initially planned to do some light restoration and service work and use the car as a weekend driver, but with encouragement from his staff that idea was ditched. 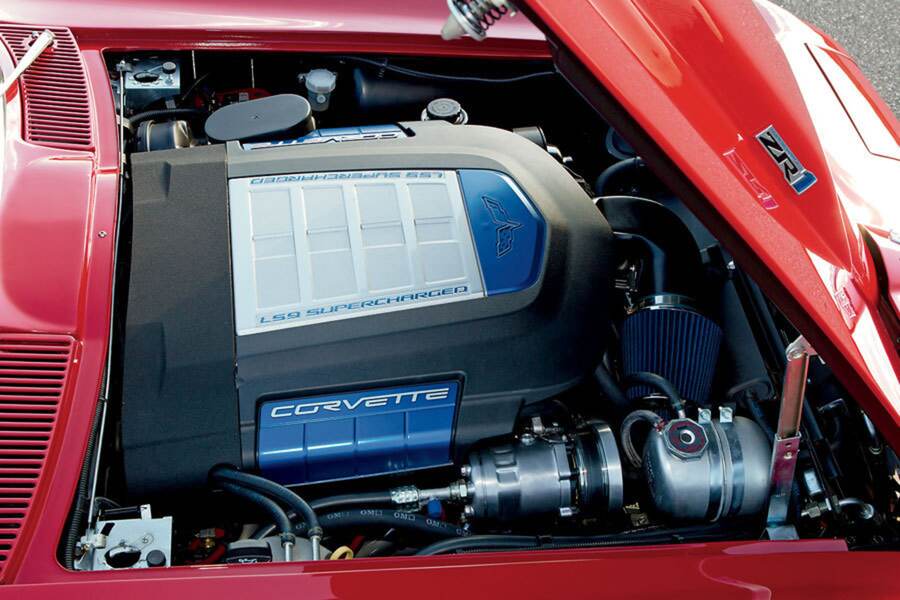 “We put together a comprehensive plan to completely transform the car into a show stopper that still looks like a stock ’65 Corvette but has the comfort and performance of a new Corvette,” explains Peter Spinella, LICCG’s Vice President.

To get the project going, a custom chassis designed to mount a C2 body with C4 suspension, steering and brakes was sourced from Newman Car Creations. At first, the rolling chassis was fitted with a new 7.0-liter LS7, but that engine was put aside in favor of a less powerful, but more exotic, 5.7-liter four-cam LT5 engine. “We happened to have a brand-new LT5 crate engine and a new ZF transmission on hand, and we thought these would complement the theme of the build very nicely,” explains Spinella.

But everything changed at the halfway point in June 2009, four months after the build began and four months before the car needed to be completed and sent off to the SEMA show in Las Vegas, where it would be prominently displayed in the Mothers Polish booth. Spinella received a call from his friend Mark Campbell, owner of Street & Performance (S&P) in Mena, Arkansas, asking if he had any use for the first GM crate LS9 S&P got in. He didn’t have to ask twice. “Up to that point,” recalls Spinella, “it was impossible to buy an LS9, so when the opportunity fell in our lap we didn’t hesitate. But, of course, since we were the first to install a new ZR1 engine in an older Corvette, we had a lot of additional challenges to overcome.” 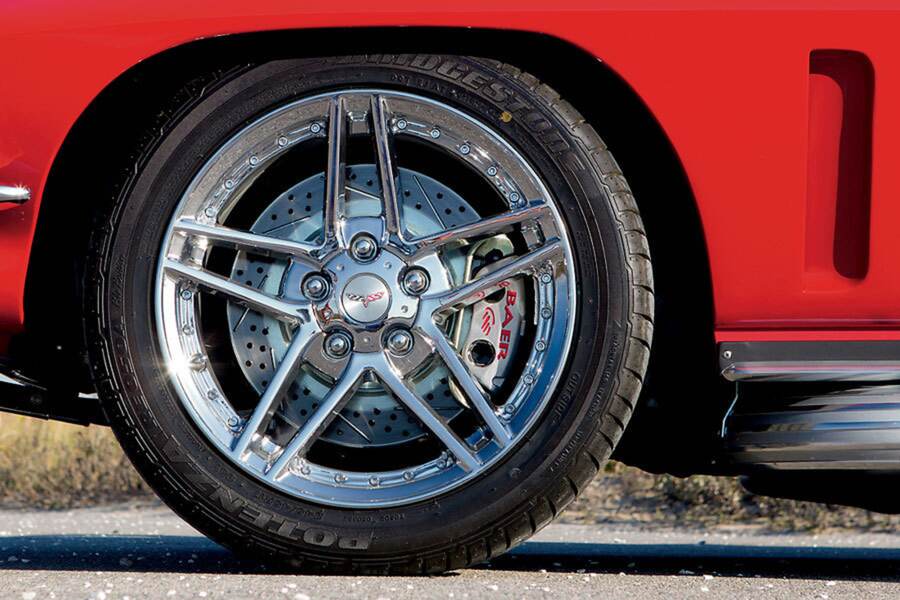 The first order of business was getting the engine to mate to the chosen transmission, a Tremec T-56 6-speed manual. (The ZR1 uses a transaxle design, so its Tremec TR6060 is located at the rear, not connected directly to its LS9). LICCG managed to get the assemblies to bolt together and worked with clutch manufacturer McLeod Racing to design and fabricate a prototype dual-disc Kevlar clutch that would work with the LS9/Tremec T-56 combination.

The next big hurdle was getting the engine to fit into the body while maintaining the latter’s stock look. That Herculean task fell to Ruben Rodriguez, LICCG’s resident engineer and fabricator. Rodriguez studied the parts, made critical measurements and then planned and executed the necessary modifications. The transmission tunnel portion of the floor was widened and raised two inches to provide clearance for the gearbox. The rear portion of the floor was cut out and reconstructed to make room for a rear torque arm. Extensive but subtle modifications were also made to the engine bay and hood. For example, the “stinger” hood scoop needed to be lengthened by six inches to clear the engine, and its hinges were redesigned for improved geometry.

On the engine side, the biggest change was the replacement of the factory top-mounted intercooler; it was simply too tall. A custom Griffen intercooler was installed in front of the radiator. The factory engine cover was still used, but fitted lower and modified to clear the car’s brake booster. New brackets were machined to relocate the air-conditioning compressor so it would fit in the stock engine bay, and a Vintage Auto Air system was installed. Working with engine supplier S&P, Spinella designed and installed a custom engine wiring harness to integrate the car with an S&P-supplied ECU. 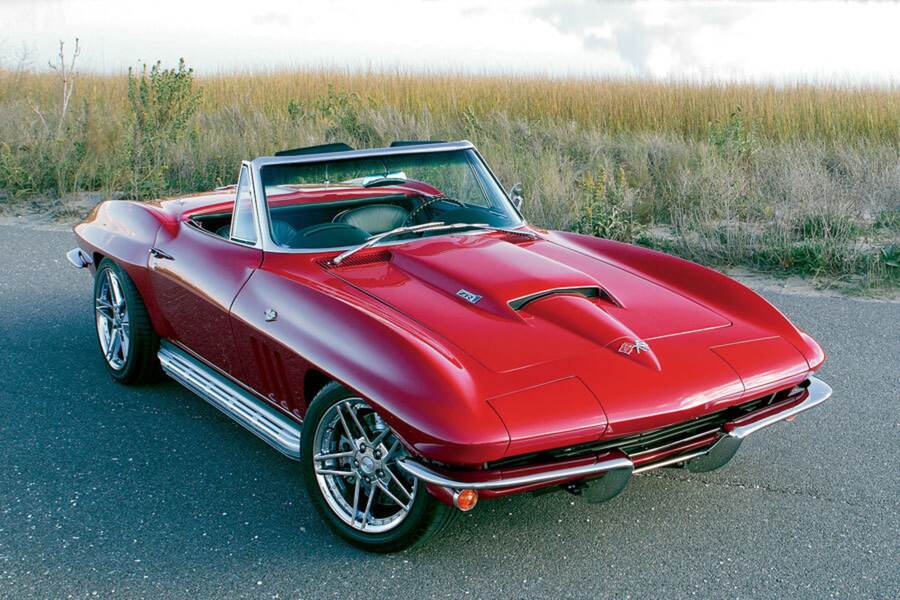 While they were at it, the LICCG crew decided to turn up the engine’s wick a bit with more aggressive ECU tuning. This, combined with S&P ceramic-coated headers—these stainless-steel tubes feed into stock, mid-year side pipes—yielded 748 horsepower on S&P’s dyno. A high-pressure Aeromotive fuel pump mounted inside a custom stainless-steel gas tank meets the engine’s demands.

While all that mechanical work was being done, Edgar Leon, LICCG’s paint and body specialist, was doing his thing. After completely disassembling the body down to a bare shell, he media-blasted off the old finish. Leon then turned to fixing the body’s old damage and the usual stress cracks found in almost any vintage Corvette.

Once all of the fiberglass work was finished, Leon still had to massage the body to perfection and paint it. He did the former the old-fashioned way, with multiple applications of high-build polyester primer that were block sanded by hand to eliminate surface imperfections. Once the body’s lines were sharp and aligned and its surfaces were completely leveled, Glasurit finishing products were applied. 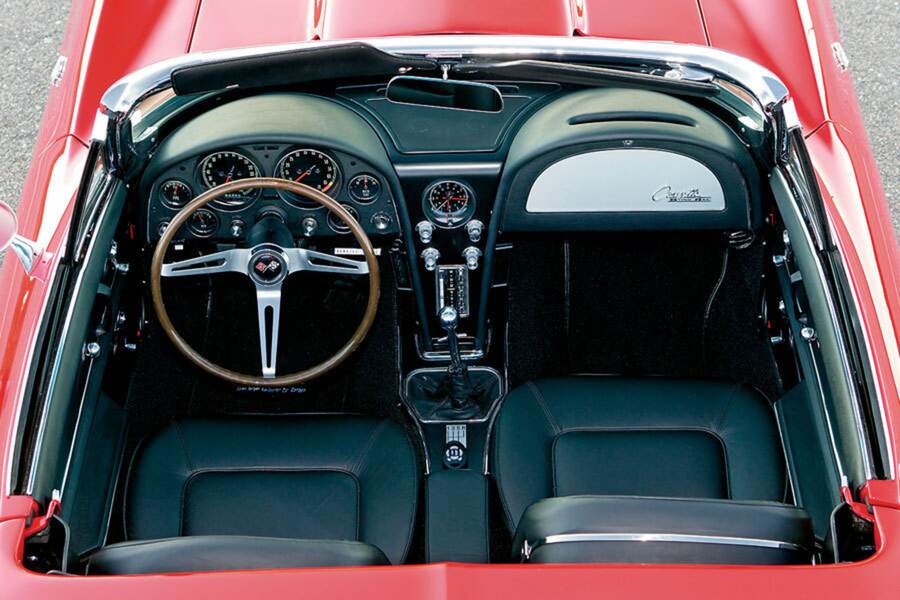 Two coats of primer/sealer were topped with four coats of Rally Red basecoat and four coats of clear. That’s a lot of clear, but in his quest for perfection, Leon sanded it in four stages using 800-grit, 1,000-grit, 2,000-grit and 3,000-grit sandpaper. This removed every hint of orange peel and yielded a final finish that is flawless. The perfect bodywork and paint are complemented by rechromed bumpers and vent window frames, new door handles, emblems, grille and weatherstripping, as well as restored windshield trim.

On the inside, LICCG melded old and new. For example, all of the instruments look just like the originals, but behind those ’65 faces lurk thoroughly modern gauges. Both the speedometer and tachometer were converted from cable-driven mechanical units to electronic ones, the amp meter was changed to a volt meter, and the temperature and oil-pressure gauges were recalibrated to better match the LS9. Onboard diagnostic ports are hidden under the dash, allowing for the same external computer hookup-procedures that can be done with a new Corvette. 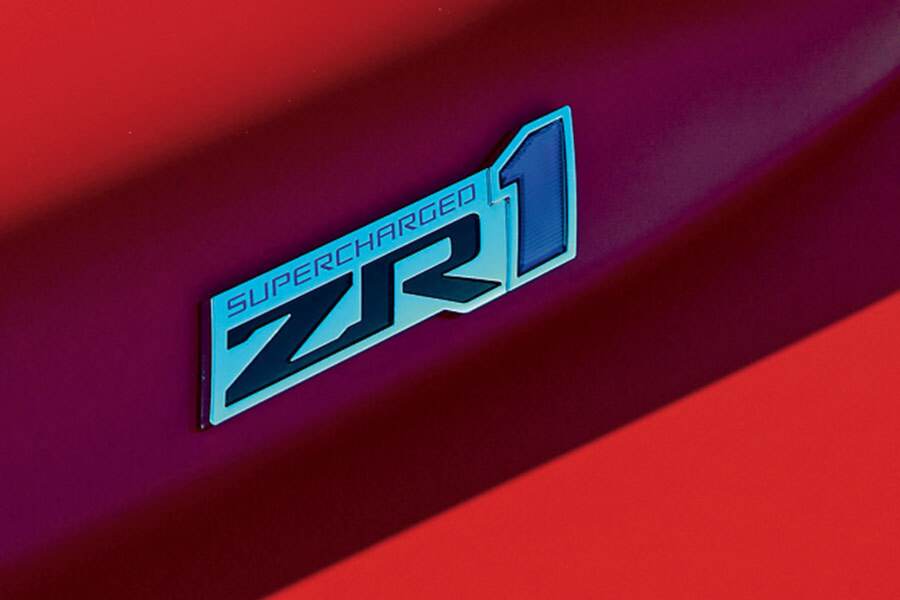 Other areas of the interior presented some unique challenges, including the pedals, shifter and radio. The Corvette’s stock mechanical throttle linkage was scrapped in favor of a custom-made throttle-by-wire system, and the clutch-pedal setup was suitably modified to work with the McLeod hydraulic clutch. A stock shifter was customized to work correctly with the Tremec six-speed, while the center console and shifter boot were tweaked to accommodate the shifter’s altered position. The steering wheel may be stock, but it controls a rack-and-pinion mechanism, not the original worm gear and sector shaft box.

To overcome the factory radio’s inherent weaknesses and bring the 45-year-old car completely up to date, a coordinated Alpine sound system was designed and installed. As with everything else, the goal was to maintain the car’s original appearance in spite of the enhancements. The newly crafted system includes an AM/FM/Sirius satellite stereo receiver, iPod connecter, CD changer and comprehensive speaker package.

Once the interior’s custom fabrication and other modifications were completed, the artisans from LICCG turned their attention to the cosmetics. The seats were stripped down to their bare frames and rebuilt with new foam, springs, hardware and custom-stitched covers that mimic the original pattern but use the highest-quality leather available. The interior work was completed with new door panels, dash pads and carpet, as well as beautifully refinished trim pieces. 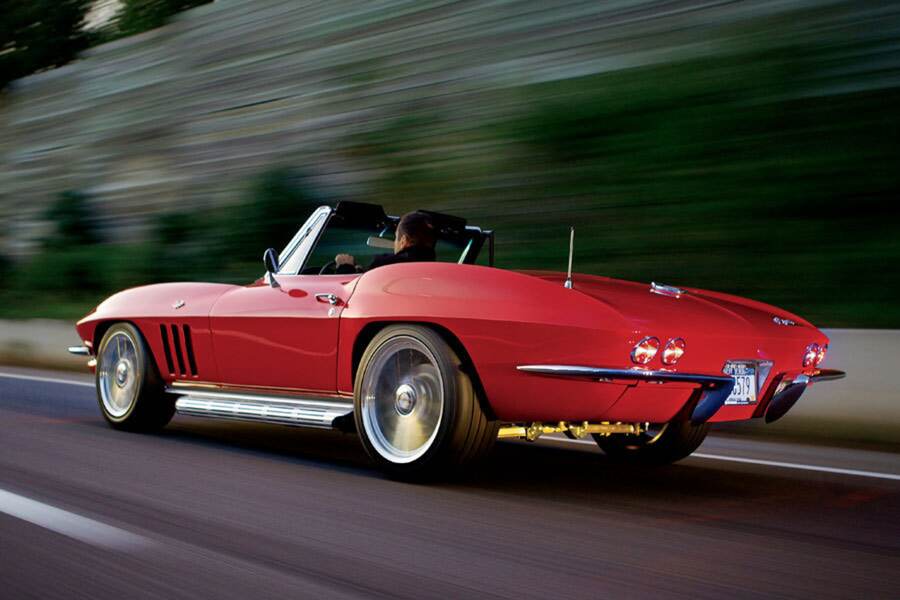 After eight months of hard work by the LICCG crew, the end product is a remarkably stock-looking Corvette. At first glance, the only exterior cue that this is no ordinary mid-year is a set of chrome-plated C5 Z06 wheels wearing fat Bridgestone radials (245/45ZR17 front, 275/40ZR18 rear). A very sharp eye might pick up the lengthened hood scoop or discreetly widened wheel arches, but even these modifications only vaguely hint at the beast that resides beneath the pretty skin. The interior doesn’t scream radical restomod, either. Obsessive-compulsive types with keen eyesight might spot the shifter’s repositioning, and a bit of rudimentary detective work will lead to the discovery of the custom sound system, but these tweaks hardly convey a real sense of what makes this thoroughly modified Corvette tick.

The only way to understand the true nature of this remarkable car is to drive it—soak up its feel, its sound and even its smell. To that end, I nestled myself in the sumptuous leather cockpit, cranked up the tunes, turned the a/c to icy and got down to business.

First off, this is an incredibly fast car—no question about it. Thankfully, the C4-based rear suspension does an admirable job of putting all that prodigious LS9 power down. But make no mistake, the engine’s 560 lb-ft of torque is more than enough to break those big Bridgestones free in the first four gears.

However, brutal power is not the most-impressive part of this car. How well the entire package works as a whole is what’s truly astonishing about this Corvette. After decades of conditioning, I usually know what to expect when I’m at the helm of a C2. They all launch with reasonable authority, even the small blocks. With the right gearing and tires, the high-horse small blocks and big blocks accelerate like rockets. That’s mostly where the fun ends, though. Even with modern tires fitted, mid-years all handle like dog poop. And while the disc-brake cars stop adequately for their age, the drum-equipped cars generally stink.

In terms of its braking, handling and steering, this ’65 restomod is a revelation. Its upgraded brakes erase speed with ease, and their performance isn’t diminished by repeated stops. Its handling is near neutral and delightfully predictable, while the ride quality is acceptably compliant. The best part of the driving experience, however, is the steering. The rack-and-pinion setup offers a level of precision that’s quite simply impossible with the car’s original hardware. Compared to a stock C2, which steers like a Great Lakes coal barge in a full gale, this Corvette has the precision of a sharpshooter’s rifle.

The delight of driving this beautifully executed restomod was not lost on Daniel Ferrara, but his ownership was cut short by a very persistent LICCG client who simply had to have it. Of course, the pain of parting was eased by the fact that Ferrara’s dedicated staff can always build him another one. 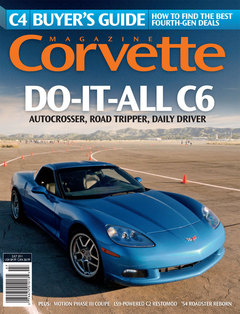