A Category of One

We can only think of a single car model built in honor of a dealer: the 1986 Malcolm Konner Commemorative Edition Corvette. 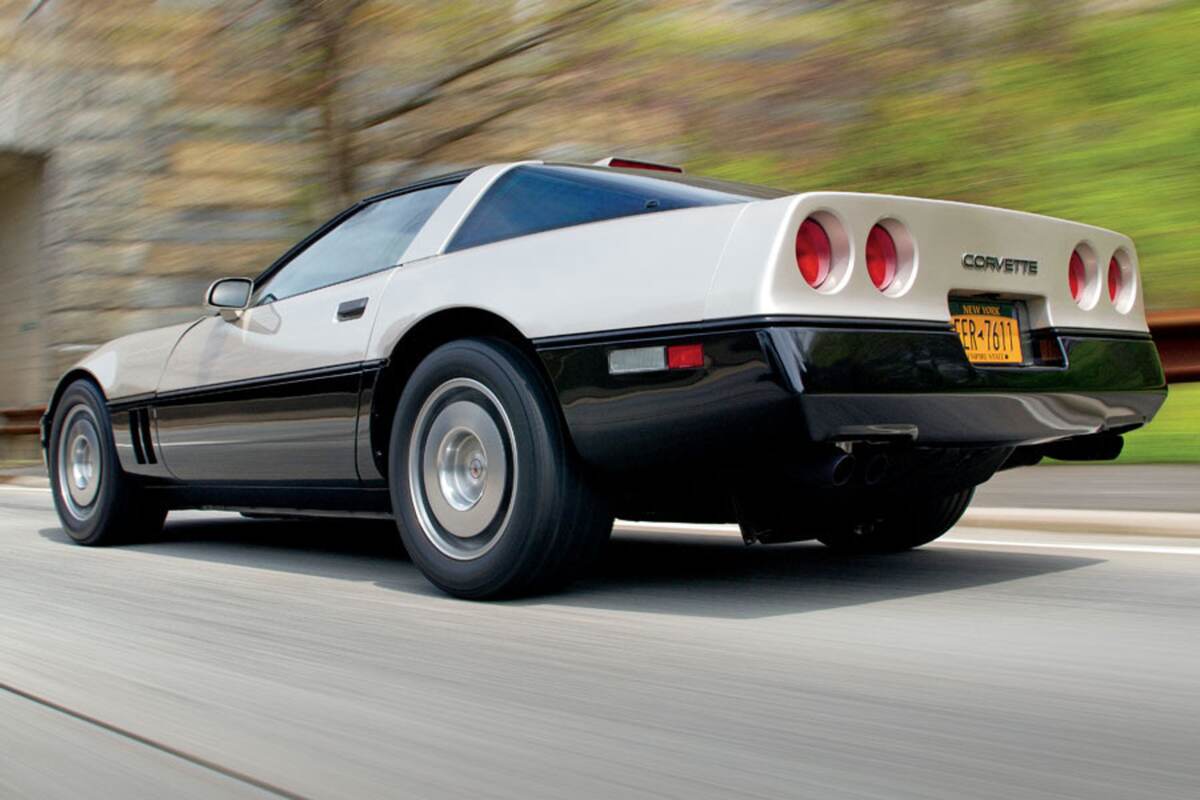 Car companies are understandably resistant to naming their merchandise after people, but doing so is certainly not unheard of. Several companies have attempted to sell cars by harnessing the power of famous figures. For example, Ford and Chrysler did it with Carroll Shelby, Chevy blessed us with the 2002 Monte Carlo SS Dale Earnhardt Signature Edition, and Citroen gave it a shot with the Picasso model. Then there are the industry titans who applied their children’s names to company products. In 1901, Daimler Motoren Gesellschaft paid homage to Mercedes, daughter of company principal Karl Benz, by naming one of its cars after her. Henry Ford forever condemned his son Edsel’s name by applying it to what many regard as one of the all-time worst cars.

Though automotive history is peppered with vehicles named for famous people with selling power and the offspring of company owners, we’ve been able to find only a single example of a car named in honor of a car dealer. For the 1986 model year, Chevrolet offered the Malcolm Konner Commemorative Edition Corvette. Just 50 were made. 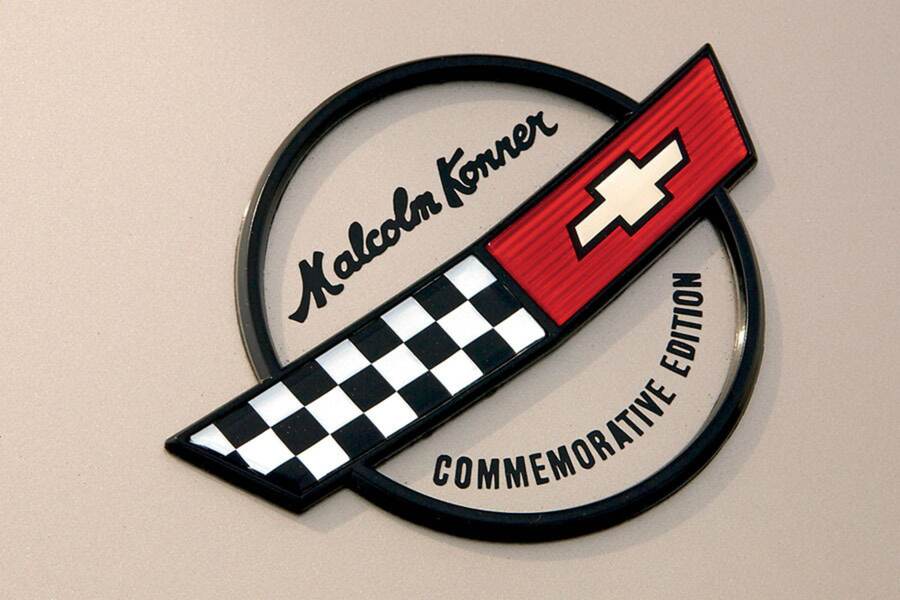 “Because we sold and serviced so many Corvettes,” explains Malcolm Konner’s son RJ Konner, “we were an invaluable resource for Chevrolet. They had a technician or engineer at the dealership 80 percent of the time to troubleshoot and help evaluate problems that came up in the field.

“But my father’s connection with Chevrolet was more than a business relationship,” Konner continues. “The automobile industry has changed dramatically in the past 20 or 30 years, with a steady turnover of people at the car companies, but before that people tended to stay in their jobs, or at least stay with the same company, and that longevity led to lasting relationships. We knew just about everyone at Chevrolet and they knew us, and in many instances we had real friendships with them.”

For evidence of this, we need only look at the huge and extravagant car shows that Malcolm Konner Chevrolet staged beginning in the 1970s. GM loaned iconic vehicles from its collection, including the Stingray racer, Mako Shark I and Manta Ray, and Corvette luminaries such as Zora Arkus-Duntov, Dave McLellan and Larry Shinoda were normally in attendance. 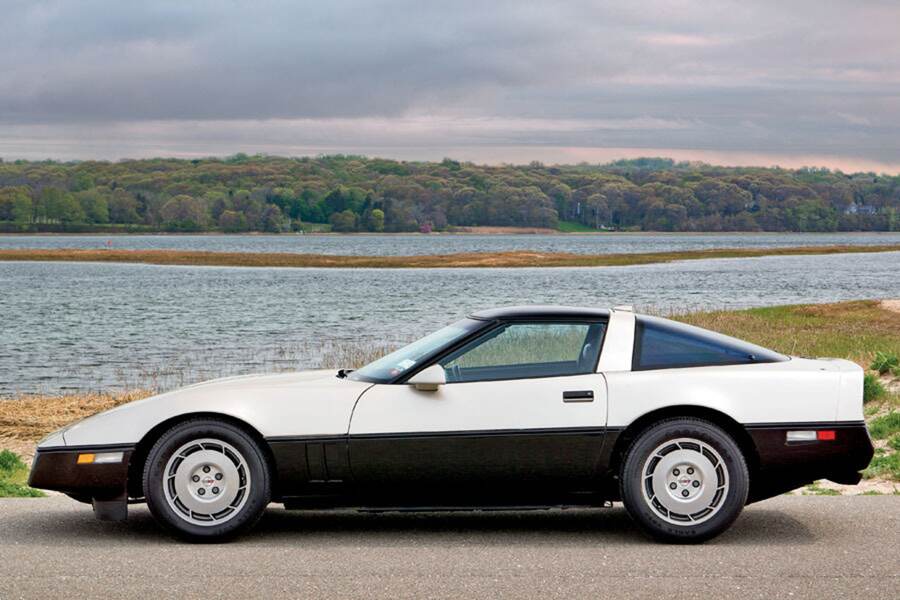 “Zora and his wife Elfie were frequent guests at our house,” remembers Konner. “They were wonderful people. They were warm, funny, and even in his old age, Duntov was a wild, unpredictable guy. My parents were very close to him and Larry Shinoda.”

After nearly 40 years in the car business, Malcolm Konner’s career came to a sudden end when he died unexpectedly while on a Chevrolet-related trip to Italy in 1983. Following Konner’s death, his family was looking for ways to honor the man who was not only a beloved husband and father, but also a highly respected and very benevolent member of his community. “Chevrolets in general and Corvettes in particular were a very important part of my father’s life,” recounts Konner, “so we were thinking about doing something to memorialize this.”

With that in mind, RJ and his brother Gary contacted people they knew at Chevrolet and at the Bowling Green Assembly Plant to ask if Chevy would agree to produce a special-edition Corvette in their father’s honor, a model which would be sold only through Malcolm Konner Chevrolet. No division of GM had ever created a special-edition option to honor a specific dealer, so the Konners were pleasantly surprised when Chevrolet agreed to do it. Chevy General Manager Bob Berger was apparently a “dealer guy,” and was therefore receptive to the idea of building a car to honor the dealer that sold more Corvettes than any other. 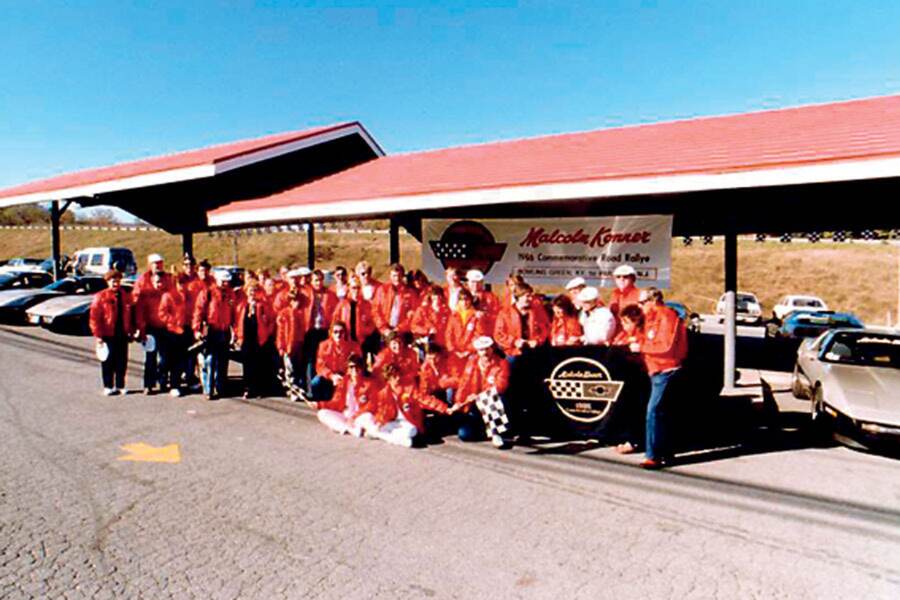 Corvette engineer Don Runkle also thought it was a worthy idea. He went to the dealership to discuss the project, and brought color samples to work out what colors the cars would be painted. Because of its low production volume, the model could not receive its own unique paint color. Instead, it was decided that the car would combine two existing Corvette exterior colors—Silver Beige and Black. In addition, the car would feature “Malcolm Konner Commemorative Edition” badges. On the inside, all 50 cars would come with graphite leather upholstery. The cockpit would be completely stock with the exception of a brass Malcolm Konner plaque on the center console.

The Konner family wanted the cars to come with BBS wheels, but GM wouldn’t install these at the factory unless they successfully went through the company’s lengthy, costly and somewhat complex wheel-validation procedures. The Konners ended up offering the attractive wheels as a dealer-installed option.

Once the $500 option was announced there was a bit of griping from some other Chevy dealers. Bob Berger put an end to that before it went anywhere by telling anyone who complained that, when they sold as many Corvettes as Konner did, they too could get a special edition. 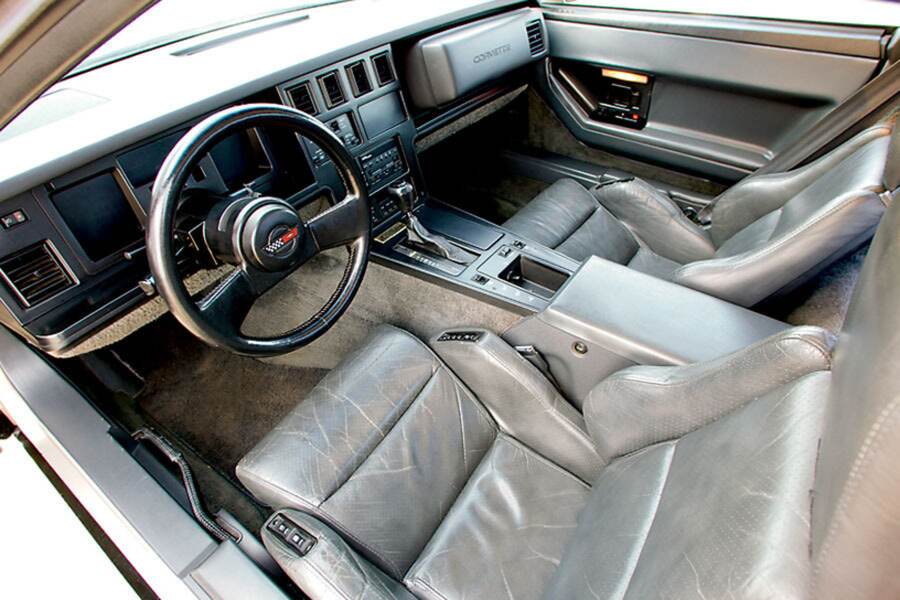 Of the 50 Malcolm Konner Special Edition coupes Bowling Green assembled, 20 came with manual transmissions; the other 30 had automatics. Ten of the cars with manuals and an equal number of the automatics were built with the optional Z51 Performance Package, while the 30 remaining Malcolm Konner Special Edition Corvettes came with standard suspension.

When it came to delivering the cars, the Konner family’s idea was to re-create what Malcolm Konner had done some 27 years prior. “In 1959, my father dreamed up the idea of organizing a rally with new Corvettes being driven from the St. Louis factory to the GM training facility on Route 22 in Union, New Jersey,” says RJ Konner. “Dad rented a plane and flew customers to St. Louis, where they took delivery of their new Corvettes. It was really a fantastic event, with Pat Boone at the GM training center in Union flagging the Corvettes across the finish line. So we thought, why not try to do something like this again?”

While Gary Konner attended to all of the details involved with getting the cars built and sold, RJ Konner ironed out all of the logistical details necessary for a mass caravan from the assembly plant in Kentucky to the dealership in New Jersey. After all needed approvals from Chevy were obtained, the Konner family waged an ad campaign in various enthusiast publications to drum up interest. With most of the 50 cars sold, they chartered a jet to fly the buyers to Bowling Green to pick up the cars, and together they all drove back to New Jersey. 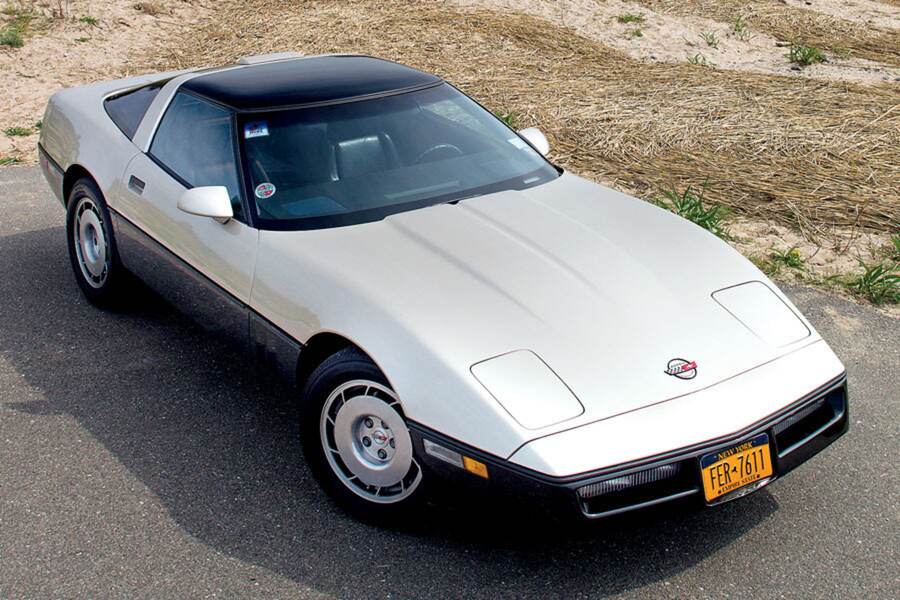 Like most C4 Corvettes, the majority of the 50 Malcolm Konner Special Edition Corvettes were driven frequently and many eventually ended up in a sad state of disrepair. Some have undoubtedly been repainted a different color, and without the unique Black/Silver Beige finish and badging they look like any other ’86, so it’s entirely possible that a few of the survivors are in the hands of people who don’t realize what they have. The cars were not built in sequence and don’t have special serial numbers, but they can still be identified by the unique Malcolm Konner Special Edition option code 4001ZA, which is on the window sticker and build sheet. (Copies of these for any C4 can be purchased from the National Corvette Museum.) The option codes, as well as the paint and interior codes, for C4s are also normally found on stickers affixed to the inside of the center-compartment door. All of the Malcolm Konner Special Edition Corvettes list “spec” (short for special) for the paint code.

When well-known Corvette collector Bill Hermanek discovered our feature car only one block away from his house, it was still wearing its original paint, so it was apparent that this was one of the 50 Malcolm Konner cars. At the time, Hermanek wasn’t looking for another Corvette, but the rarity of the car intrigued him. After some intense negotiations, he added it to his collection. “The odometer showed 90,000 miles,” Hermanek tells us, “and it needed a variety of things, but it ran and drove great, so I went ahead and bought it.”

Hermanek is currently president of the Long Island NCRS chapter, so it’s no surprise that he’s taking pains to bring the car back to “as new” condition. The paint on the hood was significantly deteriorated, so had got it refinished. The interior is all original, and a good cleaning brought that back to near-new condition. The car’s special brass console plaque was missing, and Hermanek assumed he’d have to find someone capable of making a reproduction for him, but a phone call to RJ Konner solved that dilemma. “I mentioned that the plaque was missing and he said he happened to have one that he was kind enough to send me!” says Hermanek. 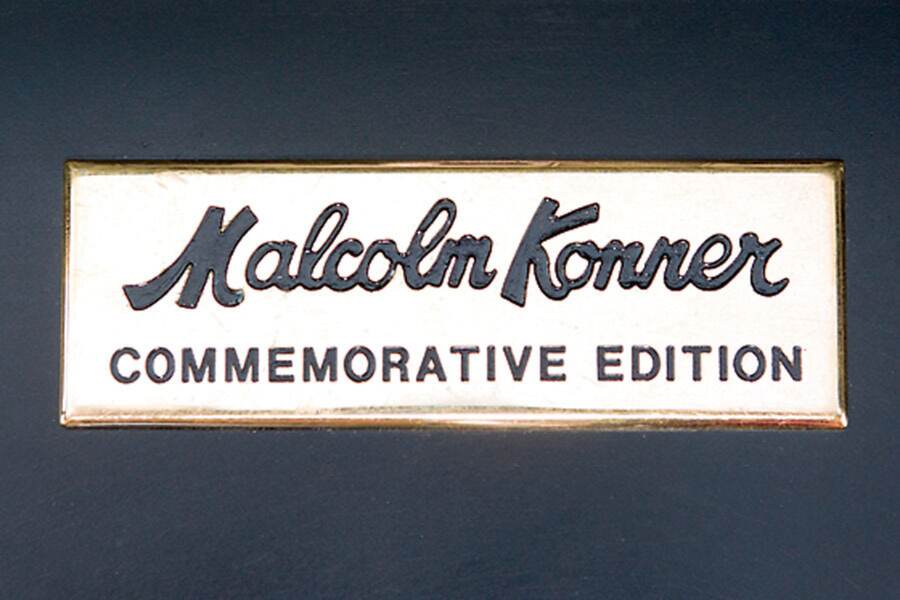 Hermanek had the car judged at a local National Corvette Restorers Society meet soon after he bought it in August 2010 and scored a 93.3, which yielded a Second Flight ribbon. After correcting a few more items he had it judged again in early May, and this time around landed a Top Flight award. Moving forward, Hermanek plans to continue improving the car and, as with all of the Corvettes in his collection, he fully intends to drive and enjoy it at every opportunity. 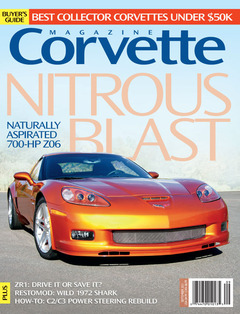