To wean his twin-turbo 863-horsepower C5 Corvette off expensive racing fuel, this owner had to come up with a novel solution. 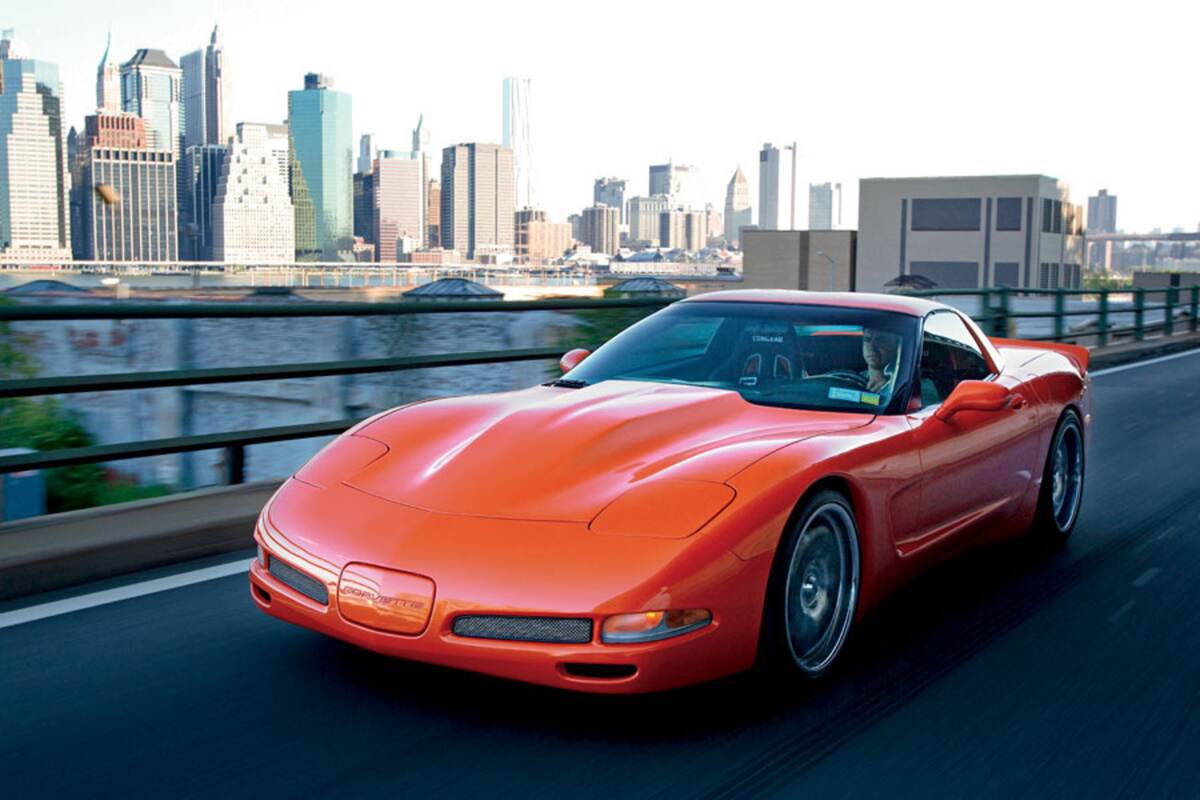 Adam Brandt bought a low-option, bank-repossessed 1997 coupe in 2001 to use as a daily driver. At the time, he already had a heavily option 2000 convertible and wanted to limit its use, so the inexpensive ’97 coupe was a logical purchase. Brandt did use the coupe for its original purpose for several years, but as something of an incurable performance hound with a history of never leaving well enough alone, he couldn’t resist the urge to make some changes to the car—OK, a lot of changes.

After seven years of service, the original black paint was tired, so in 2004 Brandt turned the car over to Glen and Ron Weller at Hudson Valley Collision in Newburgh, New York. They completely disassembled the body, fitted an ACI rear spoiler and hood, and shot the car with a striking shade of Custom House of Kolor-supplied orange called Tangelo Pearl. The attention-grabbing exterior was complemented by some interior changes, including the installation of Corbeau A4 seats in place of the stock ones. For safety’s sake, Brandt added Corbeau Racing five-point harnesses for both driver and passenger, as well as a Doug Rippie roll bar.

As it turns out, Brandt was only getting started. In 2007, the original engine was pulled and a new 347-cid powerplant built up by Julio Hormillia from Cartek Racing was installed. Based around an LS6 block, the new mill featured a Callies forged crankshaft, Manley 4340 lightweight I-beam connecting rods and Diamond forged pistons. The forged short block was topped off with Cartek 3X cylinder heads stuffed full of super-strong parts, including Manley intake and Iconel exhaust valves, and Harland Sharpe-modified stock 1.7:1 rocker arms. An otherwise stock LS6 intake was ported for increased air flow efficiency and Kooks headers were mated to 3-inch pipes to exhaust the spent gases. Valve actuation came by way of a Comp Cams 232/240 grind designed specifically for forced-induction LS engines. That was needed because Brandt elected to turbocharge the new engine with an Air Power Systems (APS) twin-turbo setup. 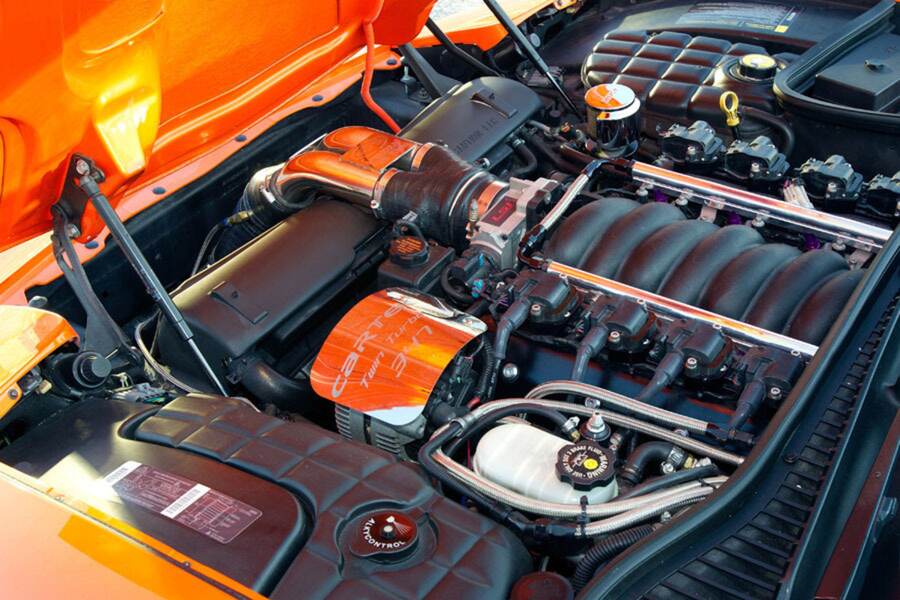 At the same time the new engine went in, the car’s original automatic transmission was yanked out in favor of a six-speed manual gearbox. The new transmission, sourced from RPM Transmissions, is a Level V T-56 built with stronger-than-stock parts to reliably stand up to more than double the power output of a stock C5 engine. The transmission’s C6 Z06 30-spline front shaft mates with a dual-disc carbon clutch assembly up front and connects out the back to a custom driveshaft from The Driveshaft Shop.

In an effort to maintain a balance between power output and roadholding ability, Brandt devoted a good measure of his attention to the car’s chassis. The stock suspension was given its walking papers and adjustable Feather Light Generation coil-overs from Pfadt Race Engineering were installed. The bodies for these are crafted from aircraft-grade aluminum, making them relatively light. Even more important, they use a very clever inverted design that places the bulk of their mass on the sprung side of the chassis. This yields faster suspension response and that increases contact between tires and road—the goal of all suspension upgrades. Pfadt Pfatty sway bars complement the coil-overs, while cross-drilled rotors and stainless lines upgrade the brake system.

The engine’s spin goes to CCW SP16A wheels measuring 19 inches in diameter and wearing Nitto Invo 305/30ZR19 tires. Up front, matching CCW wheels are shod with 275/30RZ19 Nitto Invos. The wheels start off as forged billets of 6061-T6 aluminum that get CNC machined into a one-piece design that’s exceedingly strong in addition to being beautiful. 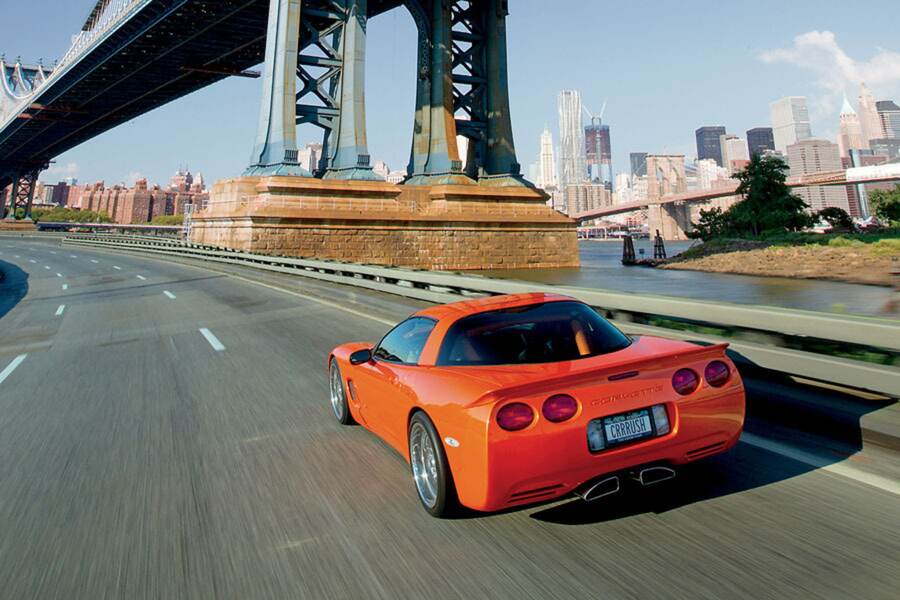 The APS turbochargers fitted to the Corvette were originally designed to produce about 8 psi of boost. Brandt was not satisfied with this, so he cranked them up to 20 psi, resulting in a monumental 863 horsepower and 845 lbs-ft of torque to the rear wheels. Predictably, the turbos failed in less than a year, necessitating a comprehensive rebuild. At about the same time the turbos got fixed, Brandt decided to go through “The Tuning School” in Odessa, Florida. This intensive two-day course taught him both the underlying theory and hands-on mechanics of extracting the most power from today’s advanced, electronically fuel-injected engines. It did not, however, convince him that moderation was a prudent tenet to live by, so he continued to run 20 psi of boost. Not surprisingly, the turbos failed again less than a year after the first rebuild.

By 2009, APS was out of the turbocharging business and parts for its systems were getting rather scarce. This, combined with the obvious fact that another rebuild would lead to another failure as long as he continued to run with such high boost pressure, led Brandt to seek another solution. He found a vendor who was making custom exhaust housings for the APS kit. This allowed the installation of larger, precision ball-bearing turbos.

The bigger and stronger turbos delivered 20-psi boost without self-destructing, but the blindingly fast Corvette was certainly a long way from its initial role as an everyday driver. One big reason for this was the car’s fueling requirements. “Because of the high boost I was running,” Brandt explains, “I had to fill the tank with racing fuel. At $16 per gallon it was way too expensive to use the car with any regularity.” 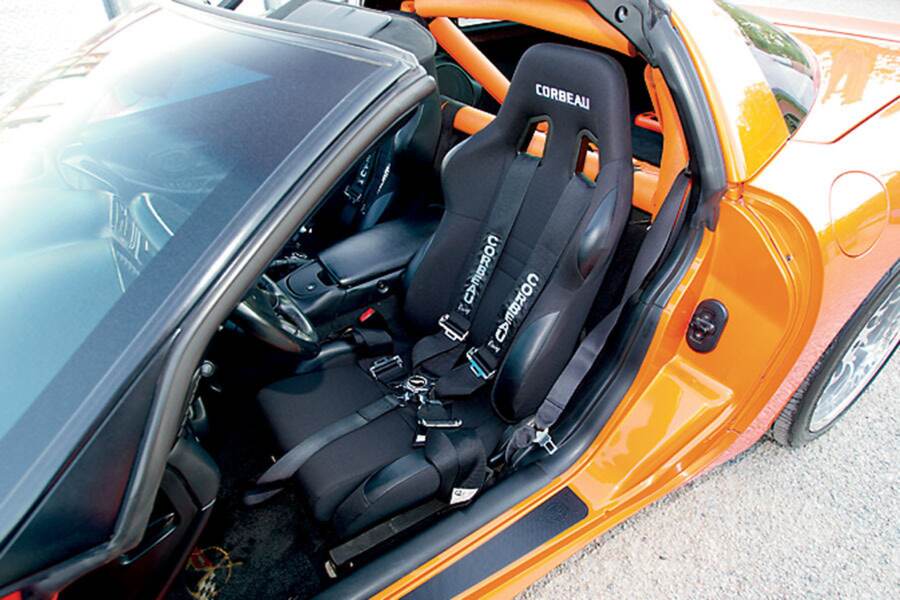 One possible solution was to reduce the boost and Brandt did that, sort of. He set up the engine to operate on 10-psi boost most of the time, while incorporating an AMS-1000 electronic boost controller that doubles boost to 20 psi with the push of a button mounted on the front of the shifter. Of course, this didn’t really solve the problem of extraordinarily high fuel cost because he still had to run race gas all the time so he could crank up the boost some of the time. So Brandt came up with another solution to his dilemma.

“I decided to use my knowledge of tuning and switch the car to run on E85 ethanol gas,” he says. “E85 pump gas delivers 105 octane and does an excellent job of cooling the engine’s incoming air charge. It costs me about $3.19 per gallon for E85, and there are more and more stations selling it so it’s relatively easy to find.”

Ethanol does have a drawback, however. As many people in the Rust Belt noticed when the government began mandating that ethanol be blended into regular pump gas in an effort to reduce pollution during the cold winter months, it takes more ethanol than oil-derived gasoline for your car to go the same distance. So while E85 costs a whole lot less than race fuel, you have to buy more of it to travel the same number of miles—up to 30 percent more. “But that difference is more than erased by the fact that racing fuel costs nearly five times as much as ethanol,” says Brandt. 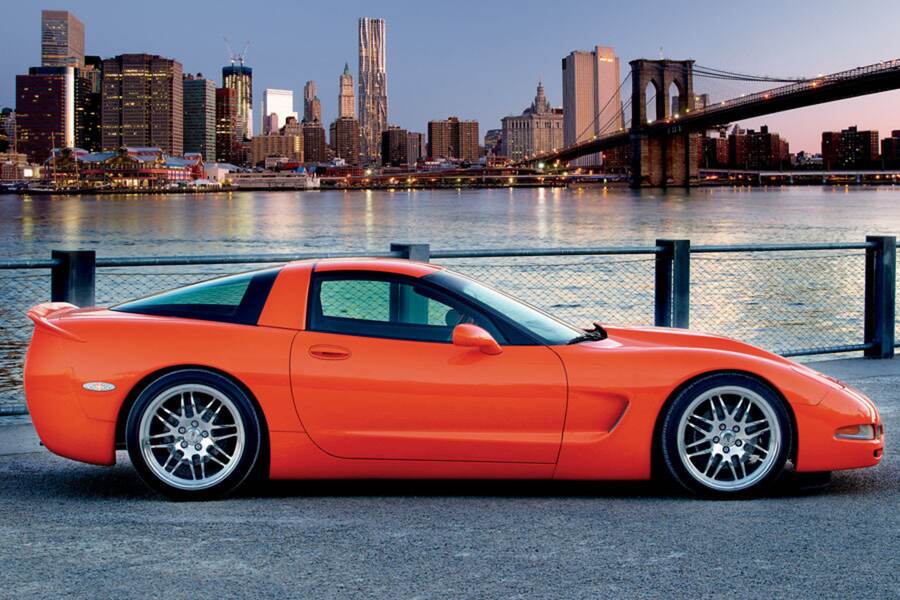 The economics clearly argue in favor of ethanol, but the reduced efficiency of the corn-based fuel does create another problem. Because it takes more of the stuff to power the car, the engine’s fuel system has to be capable of delivering all that added volume. Brandt’s Corvette already had dual Walbro pumps that could be dialed up to move more fuel to the engine, but the injectors weren’t capable of handling it once it got there. To solve that problem Brandt turned to Injector Dynamics; the company’s ID 2000 fuel injectors are well suited to a high-powered engine running E85.

With fuel costs reduced by about 75 percent, Brandt drives the car a lot more than he used to. While still preserving the luxuries of a stock C5, this Corvette offers up astounding performance, thanks in large measure to the chassis, drivetrain and brake system modifications—and, of course, the highly tuned twin-turbo engine. 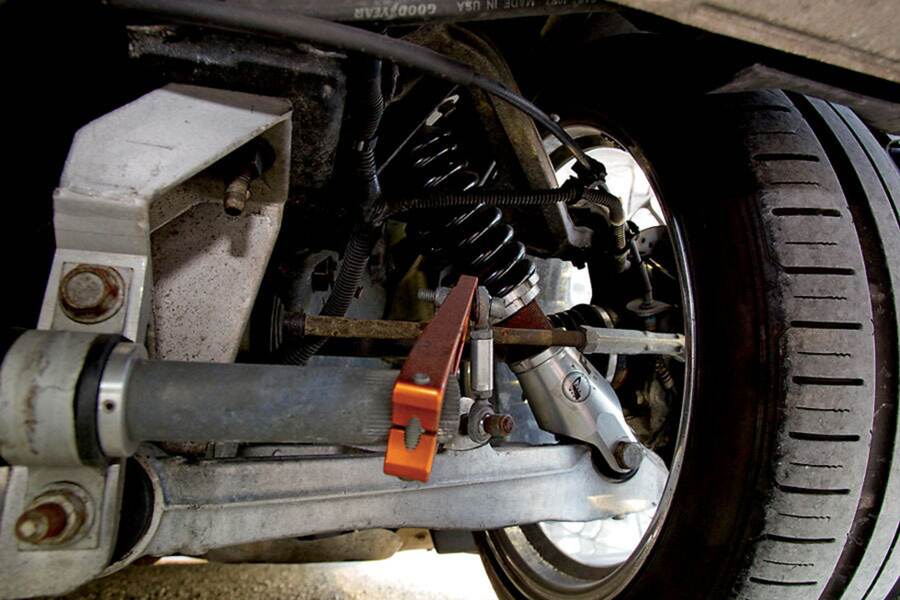 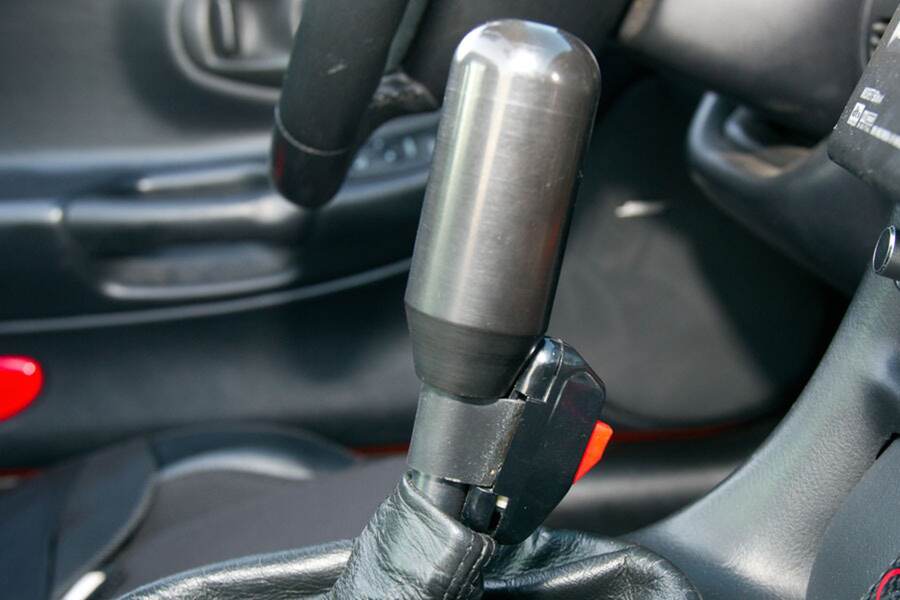 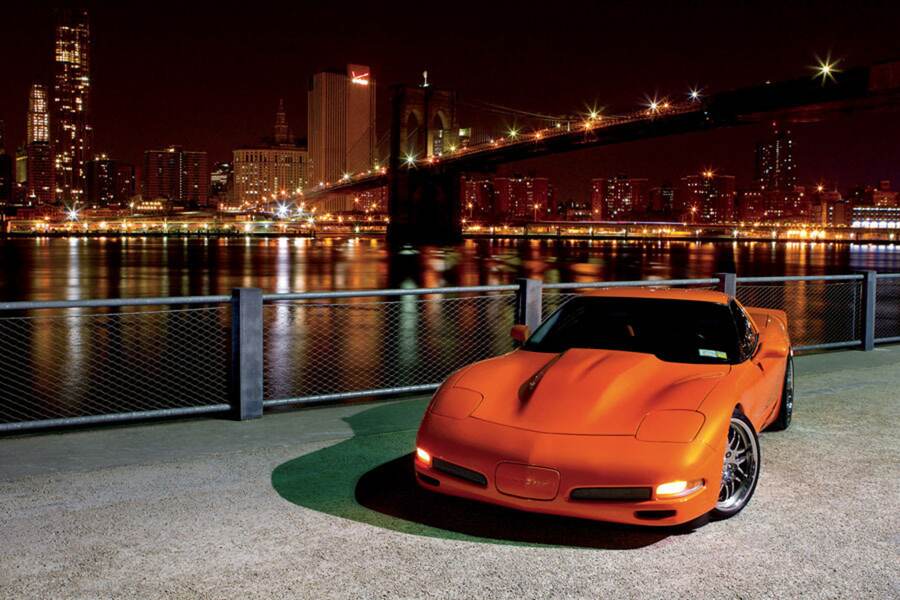 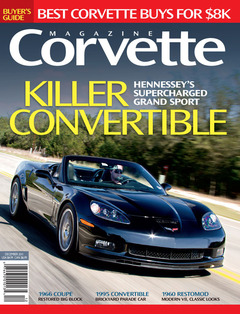