This is no mere tuner C5; it is the Skunk Werkes Speedster, designed and executed by the man who penned the fifth-gen Corvette—John Cafaro. 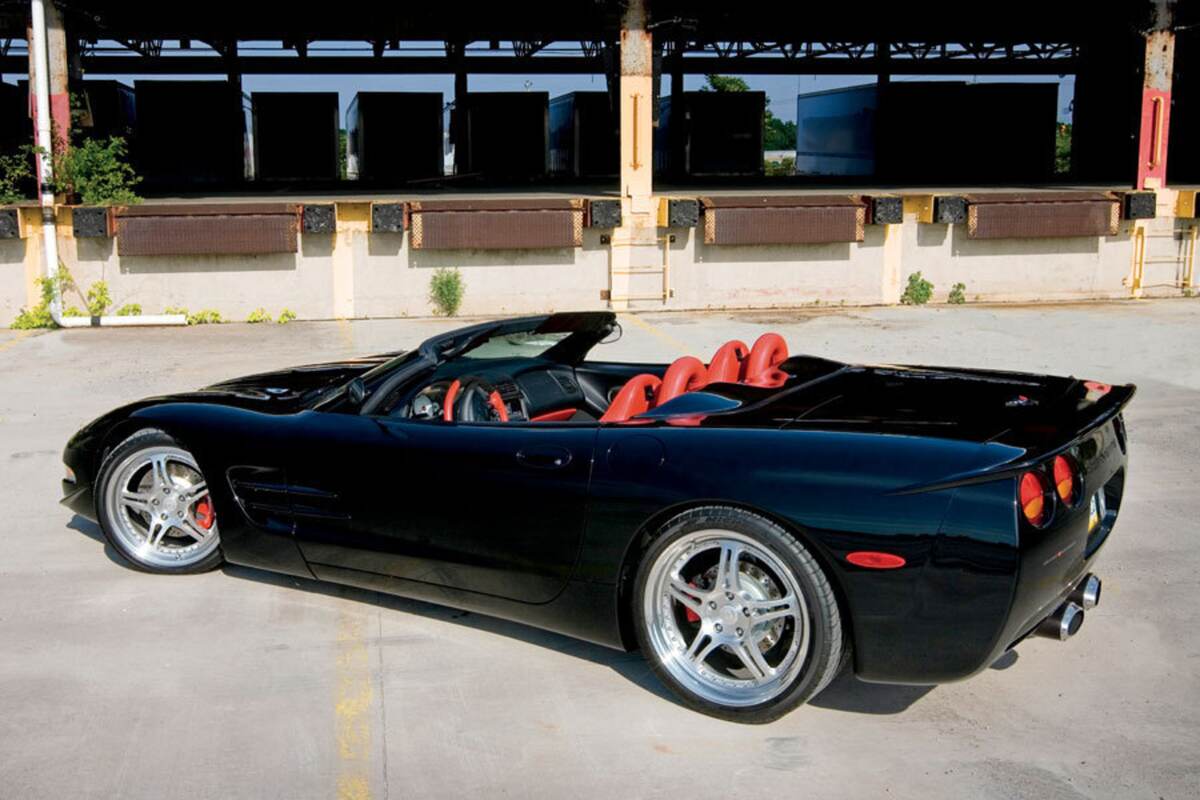 Take a quick look at Don Meluzio’s 1998 Corvette, and you could easily assume that its chop-top treatment was executed by some random speed shop. On one level, you’d be right—this is no factory model. However, the shop that did the work was far from your average tuner; it was comprised of two GM employees, one of them being the very man who designed the fifth-generation Corvette: John Cafaro.

The C5 is perhaps the crowning achievement of Cafaro’s long career with GM, which began in the late ’70s. Exceptionally talented and motivated, the young designer quickly made his way up the ranks. Soon, he was working on the C4 Corvette under the guidance of Jerry Palmer, head of the Chevy 3 Design Studio. When it came time to design the next Corvette, Cafaro was in charge of the project.

The C5 coupe was introduced to widespread acclaim in 1997. A convertible was offered the following year, and a hardtop joined the lineup in 1999. Cafaro had toyed with the idea of adding yet another version, an ultra-low-topped speedster. “I have always been intrigued by that type of car, going back to the fourth-generation Corvette,” says the designer. “When I worked in the Corvette studio under Jerry Palmer, I did a few renderings on the fourth-gen that had a chopped roof on it.” As an in-house experiment, GM actually had American Specialty Cars (ASC) build a ZR-1 Spyder, which featured a shortened windshield and a detachable hardtop. A C5 Speedster was never considered by Chevrolet, but that didn’t stop Cafaro—who was promoted within GM Styling to oversee truck design—from pursuing his interest in creating another Corvette model. 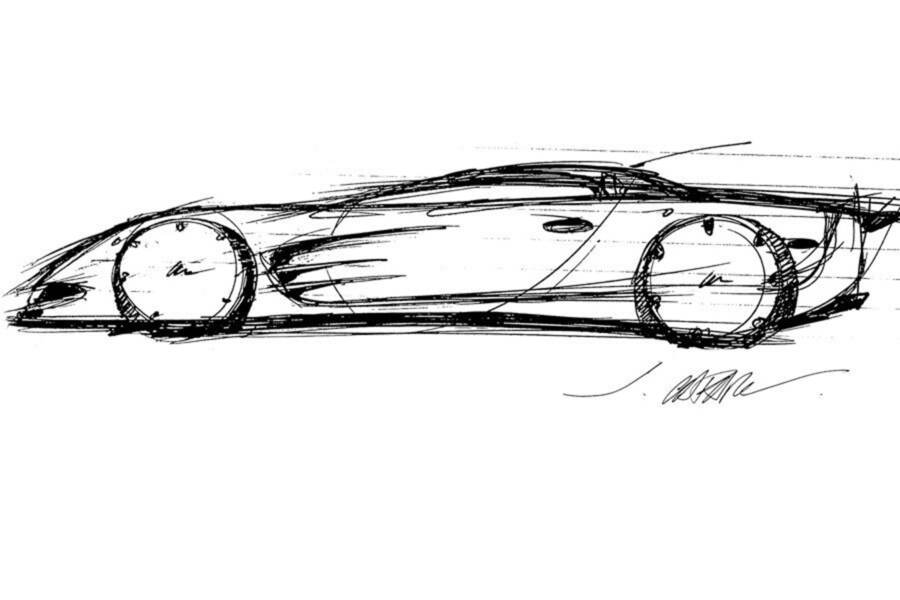 Partnering with Henry Iovino, a GM engineer that was working on truck interiors at the time, Cafaro set up Skunk Werkes in Iovino’s NASCAR-grade basement garage in the summer of 1999. The idea behind the self-funded venture was to create a dedicated Corvette-tuning shop that would eventually produce a series of turn-key cars. “What we wanted to do was take the Corvette outside the normal boundaries of a corporate environment,” explains Cafaro. In terms of styling, as well as performance, he and Iovino wanted to think outside the box.

Thinking outside the box meant cutting ten inches off a C5 convertible’s windshield. This act radically changed the appearance of the car—just what the pair wanted—but it also introduced a series of engineering challenges that required complex solutions. That was because Skunk Werkes wanted its creation to have a fully functioning power convertible top, not a mere canvas toupee (as is commonly the case with aftermarket chop tops, and even some factory jobs) as well as cut-down side windows that operated with the standard hardware.

“I really just wanted a top that was very similar to the production top, just lower, with all the best sealing and the best profile, in the bows and the contours of the backlight,” explains Cafaro. Knowing such a task was beyond its humble means, Skunk Werkes turned to the creators of the ZR-1 Spyder. “ASC engineered and developed the top for us under our direction,” says Cafaro. 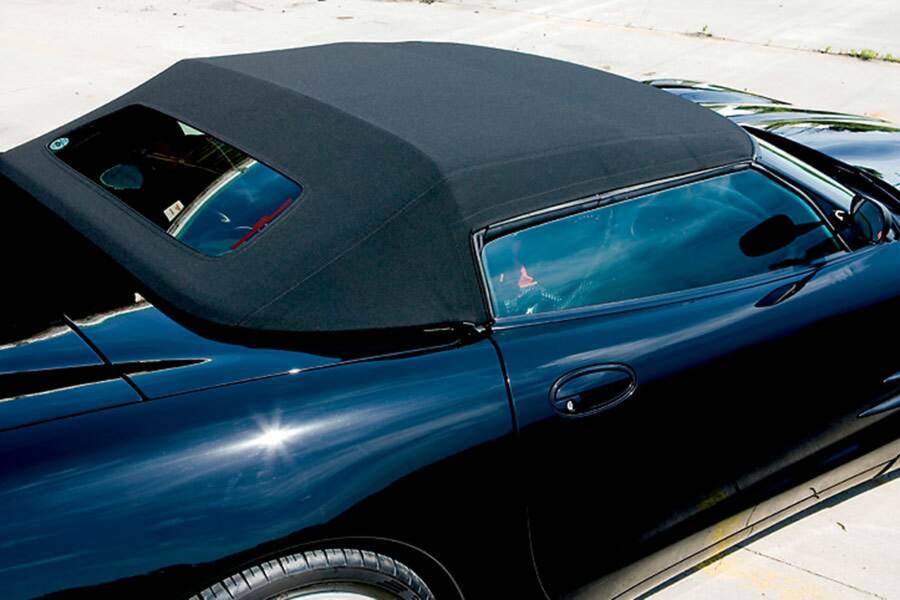 When it came to chopping down the windshield frame, Cafaro and Iovino did the work themselves down in the basement. That first cut, however, came with some trepidation—it was, after all, Cafaro’s personal C5 convertible that was going under the knife. The hesitating stopped when Cafaro told Iovino to “just cut the damn thing!”

We wondered if Skunk Werkes was concerned about how this radical change would affect the car’s safety. “It’s not really altered in areas where it would impact safety or structure,” answers Cafaro. “In some ways it has less structure—we took ten inches of glass and aluminum out of the car.” Still, the duo decided to install a pair of roll hoops behind the seats, just to be on the safe side.

Exterior modifications went beyond just the low roofline. Cafaro designed a number of new body panels aimed at heightening the Corvette’s visual impact and reducing aerodynamic lift. These enhancements included a raised hood, front and rear spoilers and side strakes. After being modeled in clay, the pieces were laid up in fiberglass in Iovino’s basement shop, which also served as the staging area for final assembly. The glass work was farmed out to a third party. 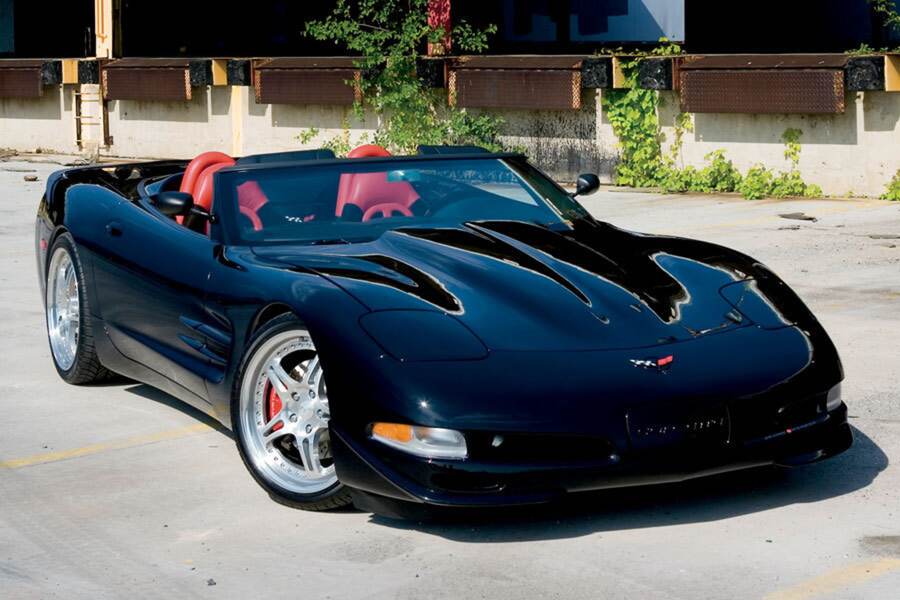 The car’s rolling stock was upgraded with HRE split-spoke alloy wheels (9.5 × 19-inch front, 10.5 × 19-inch rear) wrapped in Michelin Pilot Sport rubber (275/30ZR19 front, 285/30ZR19 rear). While the LS1 mill was left stock, the engine bay did receive some visual enhancements in the form of carbon-fiber trim. Corsa Performance Exhausts developed a unique cat-back exhaust system for the Speedster. Other performance upgrades, such as reworked heads, a hotter cam, headers and possibly a supercharger, were envisioned once production was ramped up.

Critics usually consider the interior to be the late-model Corvette’s weak link. Cafaro wanted to change that perception by creating a cockpit that rivaled anything being offered by Ferrari, Porsche or Mercedes-Benz. Instead of attempting to tackle this project down in its underground lair, Skunk Werkes contracted Ontario-based Caravaggio Corvettes to handle all the interior enhancements. “John Caravaggio was the first guy that I called because we wanted to tap into his handcrafted capability,” says Cafaro. “He and I have similar tastes.”

The cockpit featured Caravaggio sports seats with increased bolstering and covered with red leather and black Alcantara upholstery. A similar combination of materials adorned the steering wheel. While the door panels got red leather inserts, the center console and parts of the dash were treated to carbon-fiber trim, creating a racy look. Same goes for the Simpson five-point harnesses; these, combined with the roll hoops, gave the Speedster a track-ready appearance. 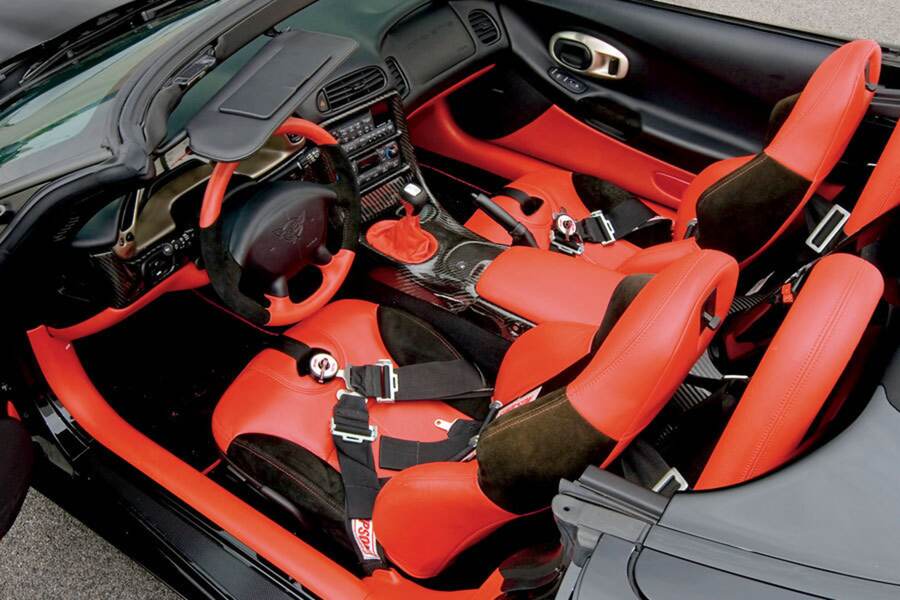 Skunk Werkes crafted the Speedster to be as production-ready as possible if GM showed interest. Explains Cafaro, “We did the car in such a way that if Dave McLellan or somebody at Chevrolet said, ‘Hey, this is a neat opportunity, why not try and run a couple of these down the line at Bowling Green,’ they could do it. We didn’t take the car so far beyond the capabilities of the architecture that it couldn’t be introduced as a fourth body style.”

Although many people within GM saw the completed car or were at least aware of it, Skunk Werkes never made an explicit sales pitch to the company. Before selling itself, the fledgling tuner needed to sell some vehicles to customers.

After Cafaro’s personal prototype, came a silver Speedster, which ended up in Bob McDorman’s vast Corvette collection at his Ohio Chevrolet dealership. Skunk Werkes built a third Speedster, finished in dark blue, for basketball player Lindsey Hunter of the Detroit Pistons. The assembly of a fourth car was done in California by a different shop. Though the same ASC top was used, that car featured a slightly different header; it was modified to increase outward vision. 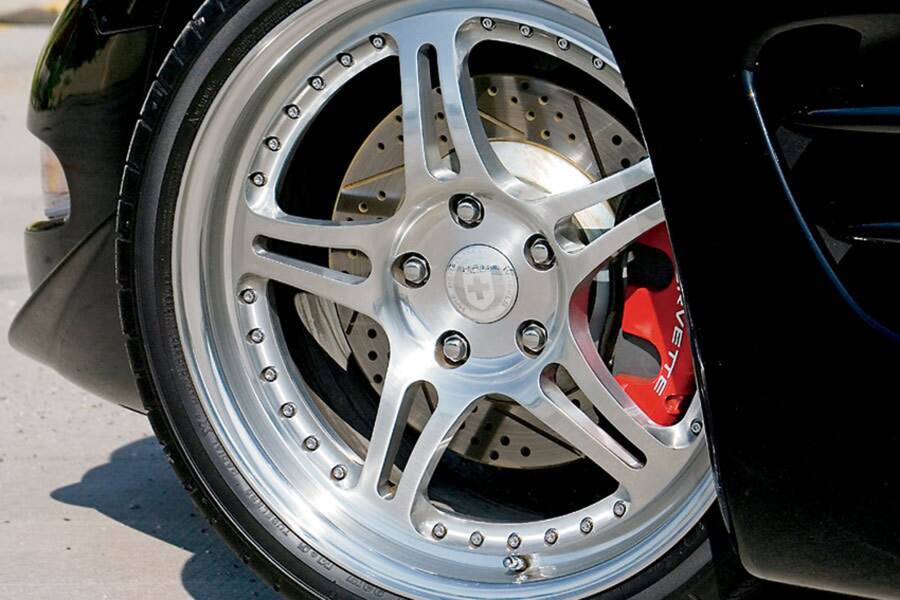 The Skunk Werkes Speedster was not cheap. The price of the convertible conversion alone was $49,500. Creating a Speedster like Cafaro’s would have set a customer back another $25,000. And, of course, there was the cost of the Corvette convertible itself. In 2000, its base price was $45,900.

Everything was looking rather bright for Skunk Werkes. The Speedster received national press, including a story in the May 22, 2000 issue of Autoweek. While this article painted an optimistic picture of the company, it concluded with the following statement: “Between the truck studio and Skunk Werkes, Cafaro has more than enough on his plate to keep him busy.” That was, indeed, the bitter truth. Skunk Werkes didn’t survive much past that story’s publication, with work stopping after the completion of the fourth Speedster. ASC had produced a fifth top, but as far as Cafaro knows it was never used.

When asked why the project didn’t go further, Cafaro explains, “It was such a huge task to do the car, and we all had day jobs. We just couldn’t balance our day jobs [with Skunk Werkes]—we just couldn’t do it. And, you know, it wasn’t like there were people pounding on the door to do Speedsters. It was very pricey, it was very time-consuming, it was not for everybody. So we weren’t going to make a living doing it or be profitable. We had so much fun doing it, but it got to the point where it was either we had to quit working at GM and do this, or keep our day jobs, so we just kinda called it quits there.” 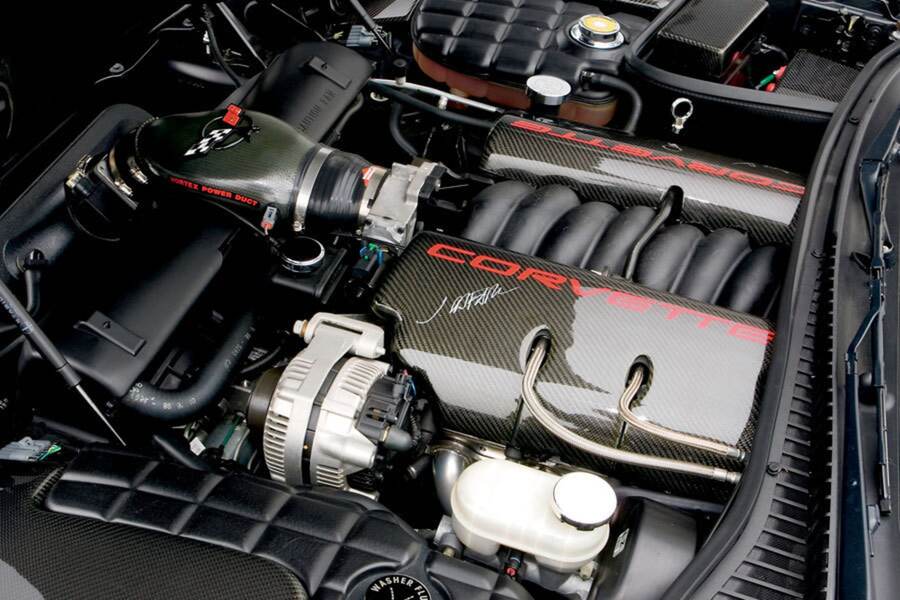 Meluzio acquired his Speedster in 2000; it is the original prototype. Like many other enthusiasts, he first read about the car in Autoweek. Unlike most enthusiasts, he immediately inquired about purchasing one. “I called [noted Corvette collector] Chip Miller and asked if he thought GM was going to put them into production,” says Meluzio. “He said no, so I sort of wrote it off as not being possible. It wasn’t a whole lot later that Chip called me and said, ‘Hey, remember that Speedster you called me about? It’s going to be at my auction at Corvettes at Carlisle this August.’”

Meluzio went to Carlisle to look at the car on the day that it was supposed to cross the auction block. “They hit me with a [starting] price so high that I left,” he says. “I never went back to the auction that day.” Meluzio later found out that the car was a “no sale.”As a result, he decided to contact Iovino directly to see what kind of deal could be made. After some intense negotiations, the Speedster found a new home. [As a side note, the Bob McDorman car recently sold at auction for $51,000—Ed.]

Meluzio couldn’t be happier with his purchase. Though other examples were built, his Skunk Werkes machine is truly one-of-a-kind. It was the only one that had the full Caravaggio interior installed. It was also the only one fitted with smaller side mirrors relocated to the A-pillars. 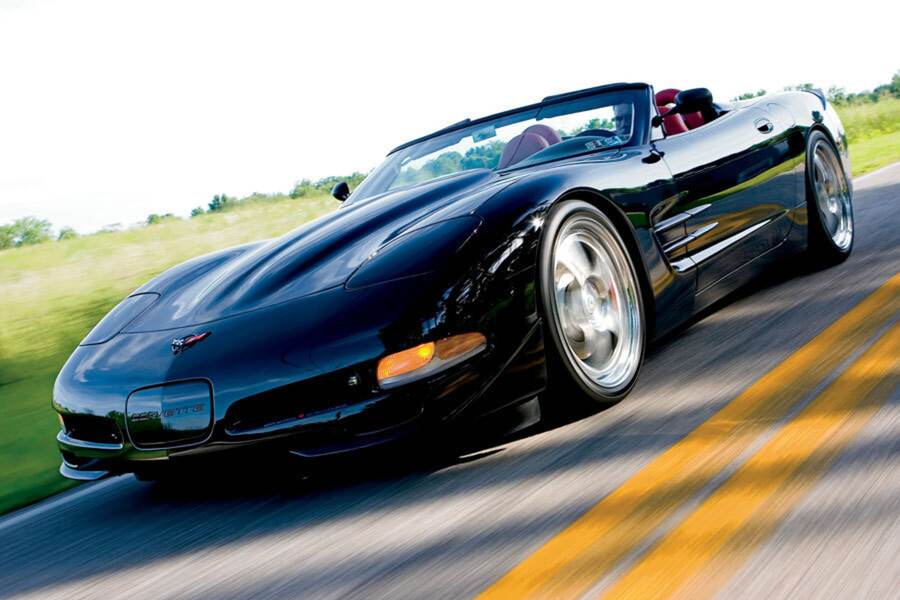 We wondered if the lowered windshield presents any compromises. “There are no real problems with the car,” answers Meluzio. “The windshield wipers are too long—no big deal. It is practical for someone 5-foot-8. I don’t know what someone 6-foot-2 would do; they could drive the car with the top down, that’s it. It is hard to see a traffic light when you are sitting real close to an intersection. The header panel gets in your way, but all things considered, you will tolerate anything to drive the car!”

And is Meluzio happy with the way his Corvette performs? “I owned a beautiful red Ferrari 348 Serie Speciale at the same time as I owned the Speedster,” he says. “I got to a point where I sold the Ferrari because I preferred to drive the Speedster!” 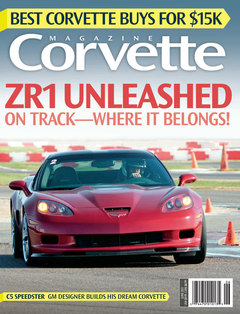