An exercise in performance incrementalism yields a 1,000-horse, Lambo-lambasting Stingray 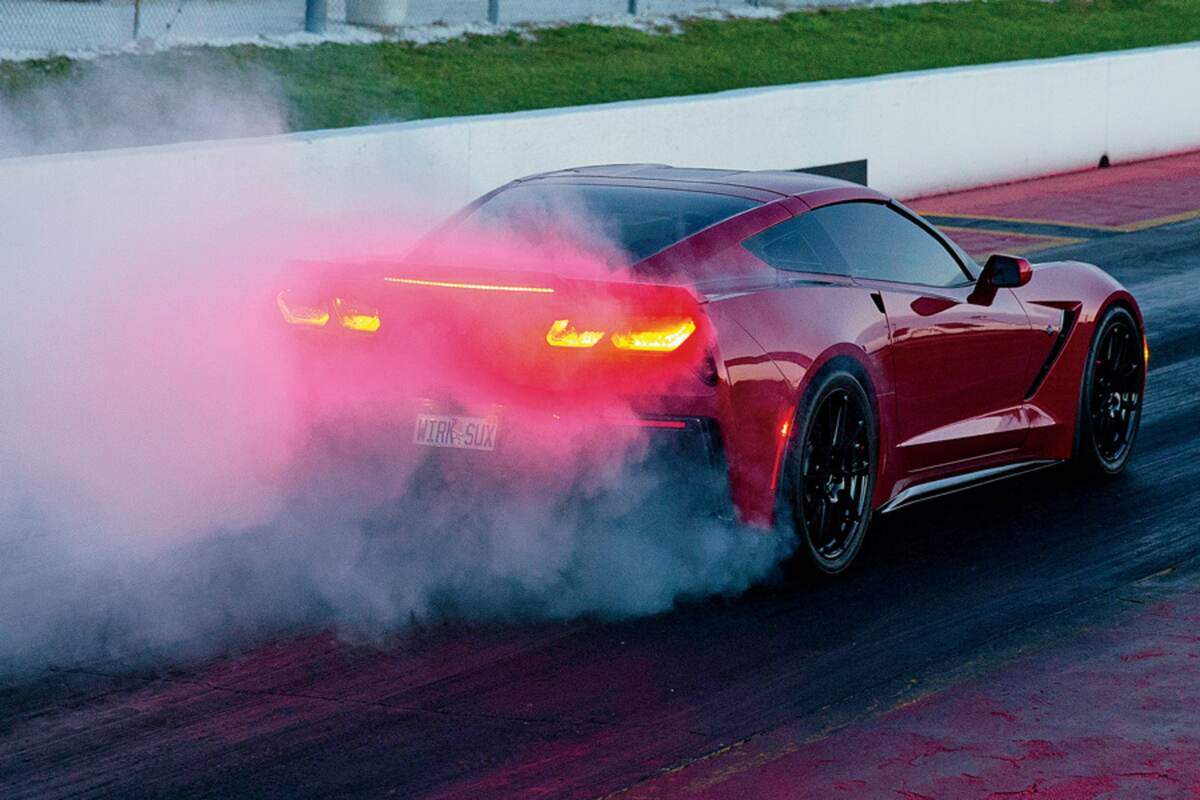 Brian Babernitch was born with gasoline in his veins, and grew up surrounded by fast cars and people who loved them. His grandfather and father were both avid sprint-car racers, and he spent countless weekends with them at tracks throughout the northeastern United States. But while grandpa and dad were drawn to racing cars, young Brian fell in love with motorcycles, and true to his bloodline began racing them at every opportunity.

“I started racing motocross at an early age,” Babernitch relates. “I travelled around the country for several years, racing, and won a few state and national events.” He stopped racing competitively only after launching an audio/video business back in 2001 and devoting most of his time to making this new venture successful. “But even then,” he notes, “I continued to ride both motocross and sport bikes on-track for fun. If that need for speed is in your system, it’s in there forever.”

Though Babernitch was drawn to fast motorcycles at an early age, quick cars didn’t lure him in until much later. In fact, the first few four-wheel vehicles he owned were trucks, but even with them we can see a clear progression. “My first was a 1986 S-10 pickup with a four-cylinder engine. Next came a 2007 S-10 SS with a V-6, followed by a 2004 Dodge Ram V-8, and finally a Hummer H2 powered by a V-8.”

When Babernitch finally decided to transition out of trucks and into a car, there was no chance of altering the instinctual path he was on. “It seems as though every new vehicle that I bought had more cylinders and more horsepower,” he observes. “I sold the Hummer, and my very first car was a Lamborghini Gallardo with a V-10.” 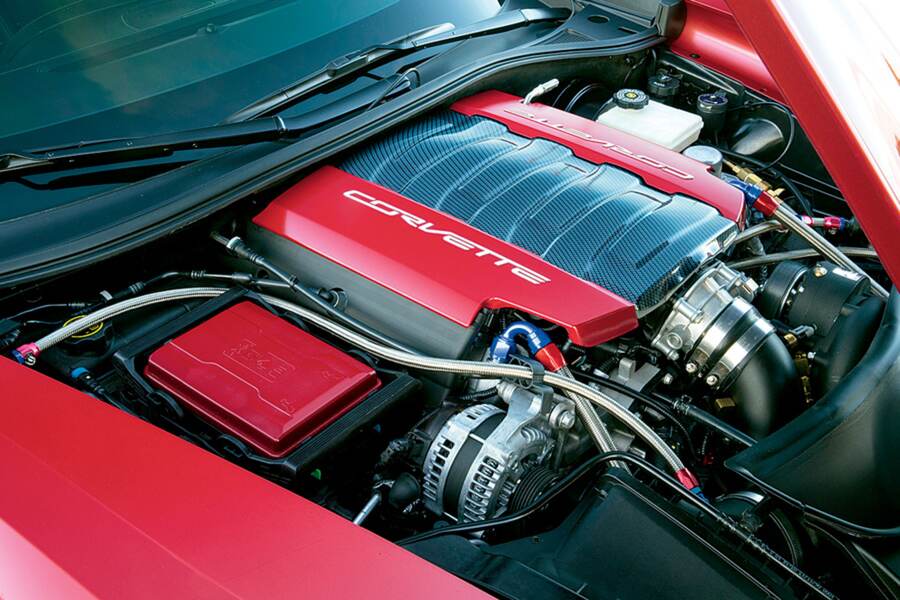 As his first—and, at the time, only—car, the Lamborghini was Babernitch’s weekend toy, as he spends most of his time in a work van. “Yeah,” he laughs, “I was one of the very rare exotic-car owners who actually drove his car. When I sold the Lamborghini after three years of ownership, it had accumulated almost 35,000 miles, even just driving it on the weekends.”

Besides taking him everywhere he went, the Italian exotic did something else. It brought him into the automotive scene, where he met like-minded enthusiasts and got pretty heavily involved with charity car shows. That induced him to buy another interesting—and, of course, fast—car to replace the Lambo, a 2011 Porsche Panamera 4S.

“The Porsche was a great car that was very sporty and at the same time very luxurious,” he explains. “But as good as it was, I always felt I was missing something. I eventually realized that it was that raw horsepower that only a true American muscle car brings.” At the very same time these thoughts were coursing through his head, Babernitch happened to see a TV commercial for the new C7 Stingray, and the car’s appearance profoundly impacted him. “It was like seeing a unicorn,” he recalls. “I knew immediately that I had to have it. The look of the car just blew me away!”

Babernitch readily admits that while he appreciated previous-generation Corvettes for their strengths, he also recognized their weaknesses and had no particular desire to own one. “I have never been what you would call a ‘Corvette Guy,’” he admits. “[Chevrolet] needed to do something drastic and new, especially if they wanted to attract younger buyers. Well, they got me, at 37 years old!” 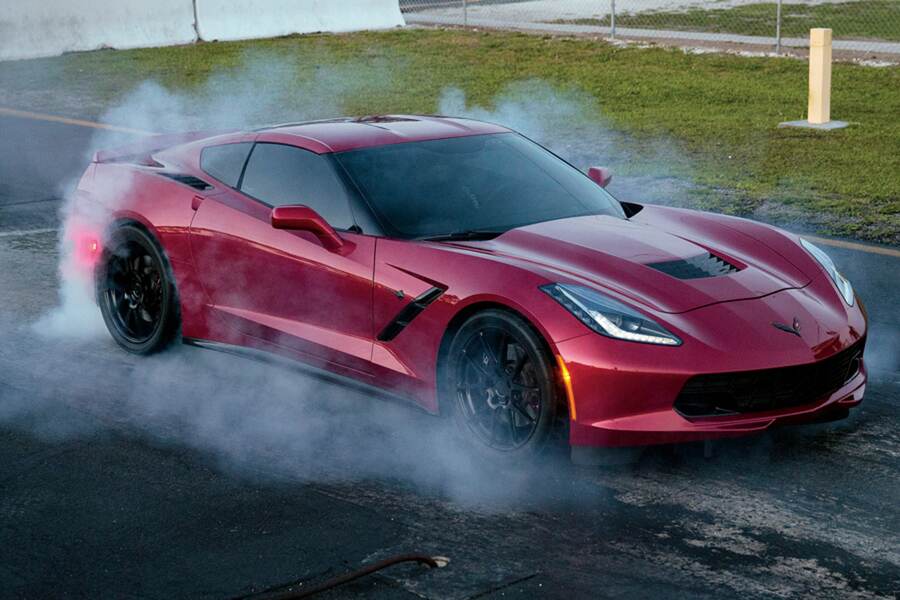 While the C7’s styling is what grabbed Babernitch’s attention initially, a leap of faith that the overall quality of the car would be on par with the superb vehicles he’d owned previously is what finally pushed him over the edge. “Let’s face it, I’d owned Italian and German cars the past several years, and the fit and finish on these cars were head and shoulders above what previous-generation Corvettes had. That all changed with the C7. GM finally took notice of what the quality should be…including the use of soft Nappa leather. If it looked like carbon fiber, it was real carbon fiber. If it looked like a vent, it was a functional vent.”

Without ever having seen one “in the flesh,” Babernitch placed an order in April 2013 with Stingray Chevrolet in Plant City, Florida. “My biggest dilemma was the fact that the cars were still five months away from production at the time, and I never had a chance to see any of the few C7 show cars that were touring the country.

This lack of firsthand exposure led to another crisis of confidence, one having to do with perhaps the most critical aspect of any new-car choice.

“Most of the ads featured a Torch Red C7, and then the yellow got a lot of print,” he recalls. “I wanted a metallic color, and I finally decided on Crystal Red Metallic. After I ordered the car, I started second guessing myself, [thinking] that I made the wrong decision.” 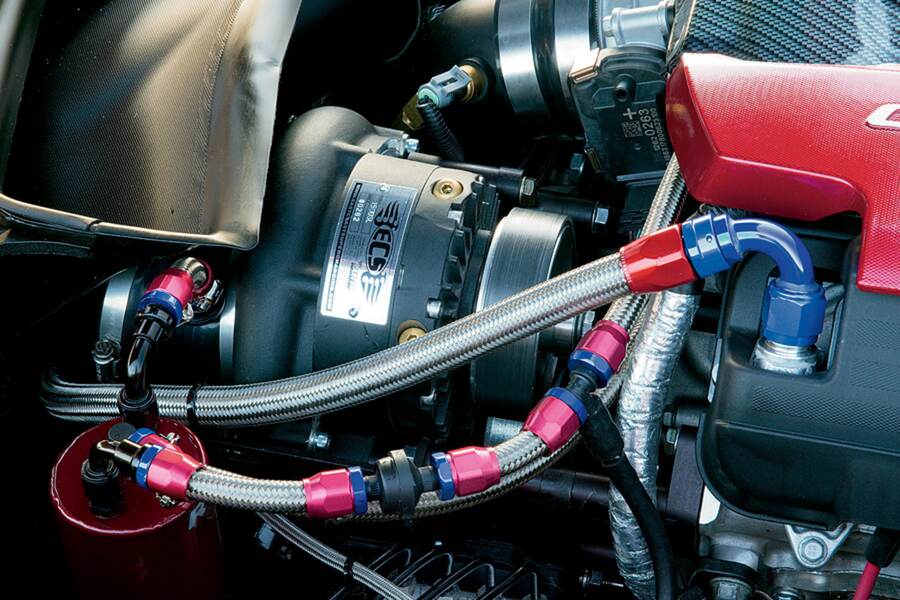 Babernitch waited five months to take delivery, and given the serious doubts about his color choice, it was a long five months indeed. Then, when his car finally did land in mid-September, he was on a plane to Denver for a one-week business trip. The additional delay was slightly agonizing, but when he finally got home and walked into the showroom, he immediately knew that he’d ordered the right hue. He also recognized that his belief in the car’s overall quality was well founded. One big surprise he did get, however, was the incredible amount of attention his new Corvette garnered.

“Since this was one of the first C7s released in the country, I could never imagine the amount of attention I was about to receive for the next several months…even still. People were always talking to me in parking lots, at stoplights. I guess the car had more hype around it than I thought. Chevy definitely delivered.”

Babernitch was absolutely in love with his new acquisition and initially didn’t give any thought to modifying it, but given his track record that was certain to change. “As companies figured out the new direct-injection platform and started coming out with performance parts for the car, I kept up with them on the forums,” he says. “I was one of the first C7 owners to have a supercharger [an East Coast Supercharging centrifugal unit, to be exact] installed. After that I told myself that was it, that was all I really wanted to do.”

But once again, the urge to tinker proved irresistible. “I had the supercharger on for about a month before adding a single-nozzle methanol-injection kit. I had just about 650 rear-wheel horsepower at that point, and again I said I was done. But then I added a Corsa Xtreme exhaust when they finally released it. Also, with that much horsepower, I needed more traction, [so] Ben at WeaponX hooked me up with Forgeline wheels wrapped in Toyo 888Rs.” 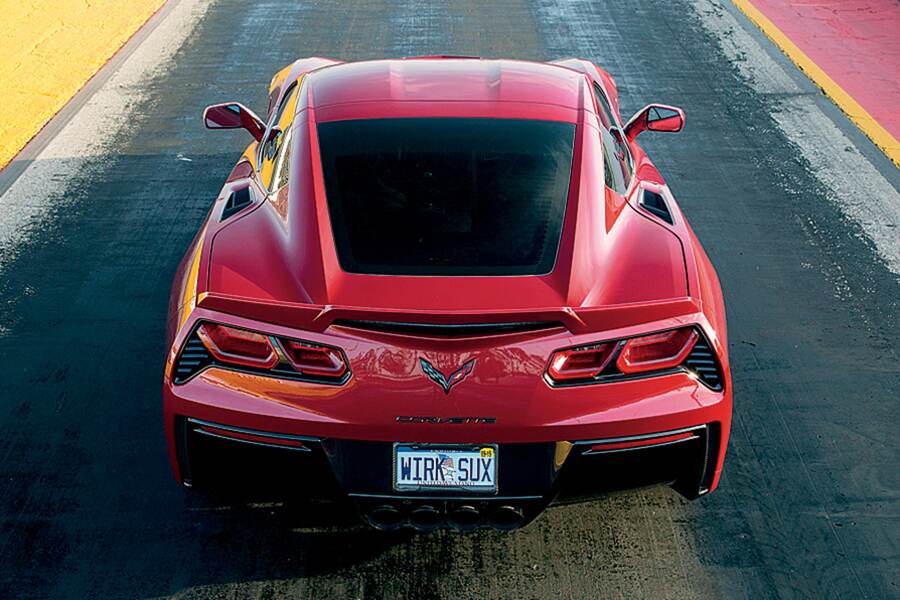 A few cosmetic components followed, including a spoiler, side skirts and an F1-style “D-bottom” steering wheel. With a new MGW shifter furnishing more-positive gear swaps, and fresh Carbotech brake pads clamping down harder on the stock calipers, it looked for a time as if Babernitch had managed to create his ideal Stingray.

“The car was awesome,” he recalls. “It was twice as fun as a stock C7, and it hooked up fantastic on the new ‘shoes.’”

But while Babernitch states that he “couldn’t have been happier” with the Stingray’s speed potential, that turned out to not to be the case. People who are into modifying high-performance cars for even greater performance are normally stopped by one of two things: either they run out of money or they run out of courage. With his audio/video business thriving, Babernitch had the funds, and with a history that includes blasting around Daytona’s high banks on motorcycles at 180 mph, it was going to take considerably more than 650 rwhp to scare him.

At the end of 2014 he contemplated changing the camshaft and adding headers. Because he was so happy with the work they’d done thus far, Babernitch returned to Florida Speed and Power (FSP) in Bradenton, Florida, where owners Matt Sorain and Rodney Whittaker specialize in all manner of performance modifications. “They told me the cam and headers would put the car well over the 700-rear-wheel-horsepower mark,” he recalls. “That would put me around 300 horsepower past the stock LT1, so I was a little concerned about the reliability of the motor.” This concern led to a plan to replace the engine’s critical internal components, including the pistons and rods, with stronger, aftermarket forged parts. 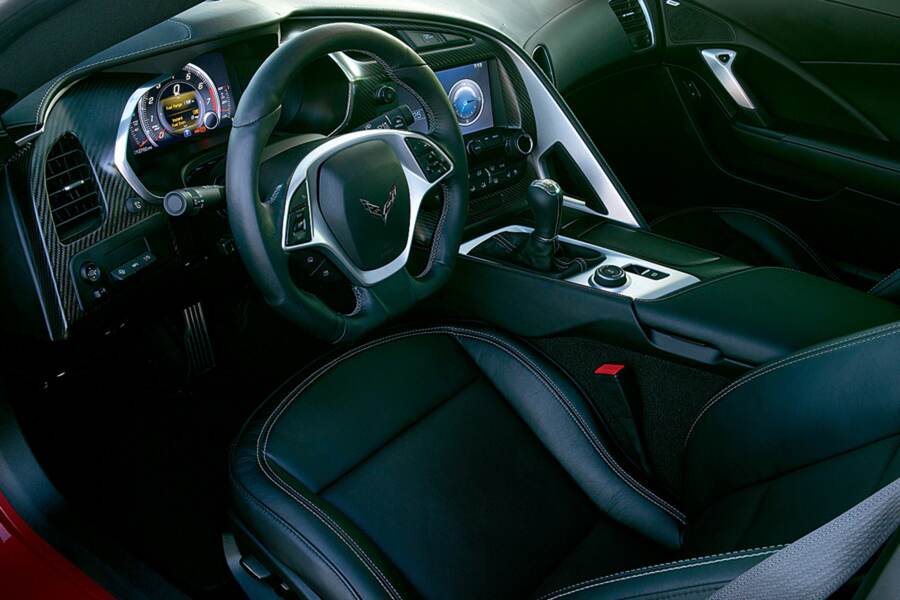 That plan lasted all of a few days before Babernitch had another idea. “I figured, while the engine was now completely apart, why not just replace the crank and do a 416 stroker motor?” he asks, somewhat rhetorically. “So FSP contacted Late Model Engines in Texas to build a whole new bottom end. While that was being done, we pulled the current motor out of the car and got everything else ready. Once the new bottom end arrived, FSP meticulously put the car back together with all of the new parts and did the final, crucial step, which was the tuning.”

The car finished up its first round of dyno runs just before our photo shoot, and the results were indeed impressive. The new blown stroker engine delivers about 900 hp and 800 lb-ft of torque to the rear wheels, which equates to roughly 1050 horses and 940 lb-ft at the crank. Even to a guy with a lot of pro-level two-wheel racing under his belt, that’s a sobering pile of performance.

Babernitch has not had all that much drive time with the Corvette since the latest modifications were completed, but true to his heritage he intends to enjoy it from one end of the usage spectrum to the other. “This car is ‘half show, half go’ because I enjoy doing shows and talking shop with people just as much as I enjoy opening it up on every open stretch of road that I can,” he says. “I also plan on hitting the strip every once in a while, as Bradenton Motorsports Park is only 35 minutes from me. I am thinking about doing some track days with it at Sebring soon, as well.”

Of course, given the Stingray’s stratospheric output, Babernitch realizes that it may be some time before can fully exploit its speed potential in any setting.

“The car is definitely fast, and loud. Traction right now is a little limited in the first few gears. The Toyo 888s do a decent job of getting the power to the ground but I can spin the tires at will, if I want to, into Fourth gear. But the nice thing [is] that as a centrifugal supercharger it’s a very linear, controllable power delivery, even with this much horsepower.”

Everyone who knows Babernitch asks him the same question when they see the latest incarnation of his Stingray. “Everyone wants to know how I like this car compared with my Gallardo, but it’s hard to compare the two. The C7 was and still is a more refined car. The Gallardo will always have that exotic feel to it, but the C7 is definitely more comfortable to drive.”

With the latest round of modifications freshly completed, has Babernitch finally reached his end point? “I think so, at least for now,” he says. “I am already at the limit of the fuel pump’s capacity. But I am looking at the ECS 2200 blower and Z06 fuel pump, so who knows? I may be calling FSP very shortly.” 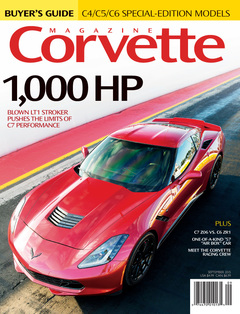