In which we find that choice is indeed good, especially when it comes to 800-hp C7s 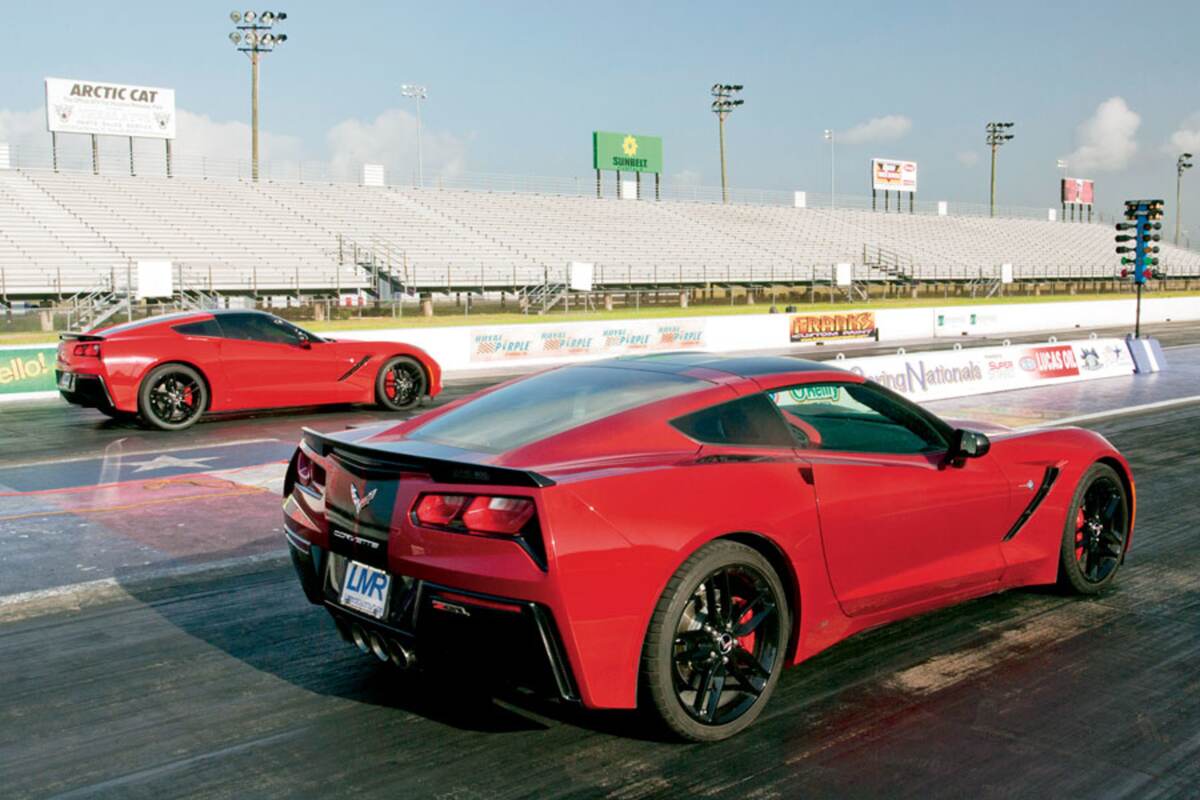 Late Model Racecraft (LMR) builds a lot of hot Corvettes, and we’ve featured a number of them in these pages before. But when the Texas tuner first put a street-driven C7 into the 9-second quarter-mile range in early 2014, we started paying particular attention. Our only reservation was that the car in question achieved that number through the use of nitrous oxide, a notoriously finicky substance with a limited life span between bottle refills. Naturally we’d have preferred to see the LMR crew manage their impressive feat of acceleration by employing a more permanent solution. They did just that recently, and we were there to witness it.

I drove down to Baytown, Texas (near Houston), to take a look at two versions of LMR’s 800-horsepower C7 package, one with a supercharger and one with twin turbos. While these systems put out about the same power, they do it in different ways and exhibit different behaviors. In theory, the turbos should be quieter and more civilized than the centrifugal blower, but that’s not how things turned out when we met up at Royal Purple Raceway. 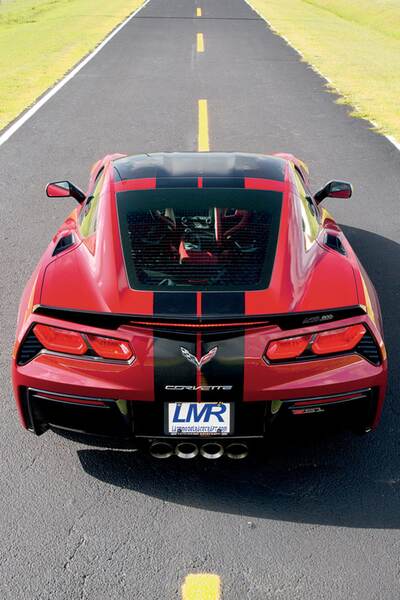 I started with John Horner’s Crystal Red 2014 coupe with the Z51 Performance Package. The only outward hints that this monster is packing almost twice the stock horsepower are a few tiny “LMR800” stickers. At low speeds it just idles along, with the A/C keeping the cockpit comfortable even on a typically murderous Texas summer day. The seven-speed manual gearbox is a delight to use, and the car even retains its stock clutch. (LMR cautions that an upgrade is a good idea for a car that sees frequent spirited use.)

Under the hood LMR’s techs add a proprietary centrifugal supercharger system based on a Paxton NOVI 1500SL setup from East Coast Supercharging. Twin air-to-air intercoolers maintain a clear path for airflow to the radiator. During testing, LMR found that modified LT1 engines can have problems with internal engine pressure, so it developed a custom breather system to address this. 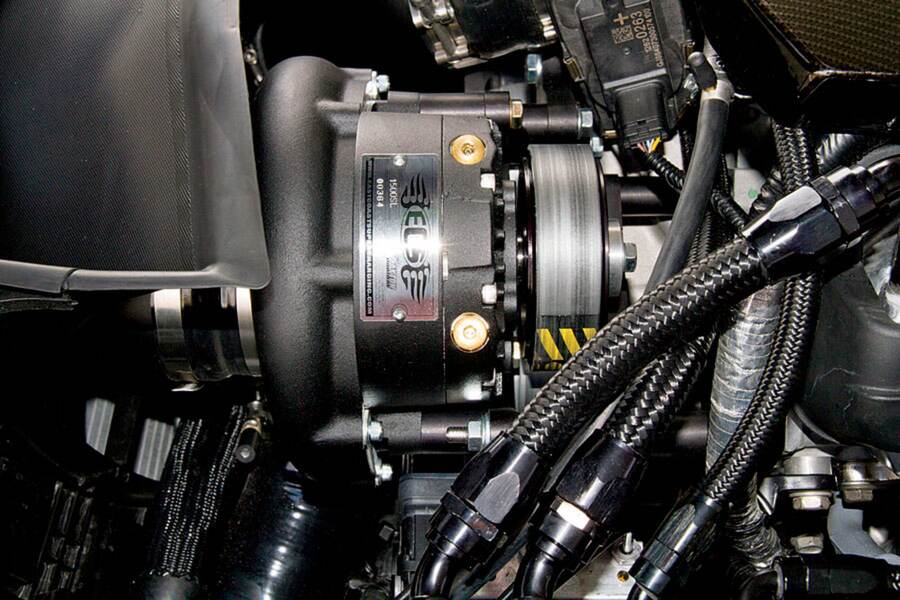 Horner is elated with his new toy, which replaces a C6 he loved dearly. In addition to the LMR engine package, he also had the suspension lowered an inch. After facing down and beating a life-threatening disease recently, he and wife Patty felt like he deserved a reward, and the maroon coupe is now put to good use carving up the famed “twisted sisters” roads located throughout the Texas Hill Country. Viper owners, beware.

The other 2014 Z51 C7 at the track was a Torch Red coupe with an automatic trans and a twin-turbocharged LMR engine. Owner Scott Brown was hoping it would be able to better the 9.99-second quarter-mile mark previously set by LMR in its nitrous-boosted Stingray. Brown also wheels a twin-turbo ’04 Mustang Cobra, a Viper GTS and a ’13 Shelby GT500, so he knows his fast cars. “I have a soft spot for anything with muscle,” he says. After experiencing a series of mechanical disasters with other tuners, Brown was thrilled with the performance and durability of his modified Corvette. “LMR has it together,” he says. 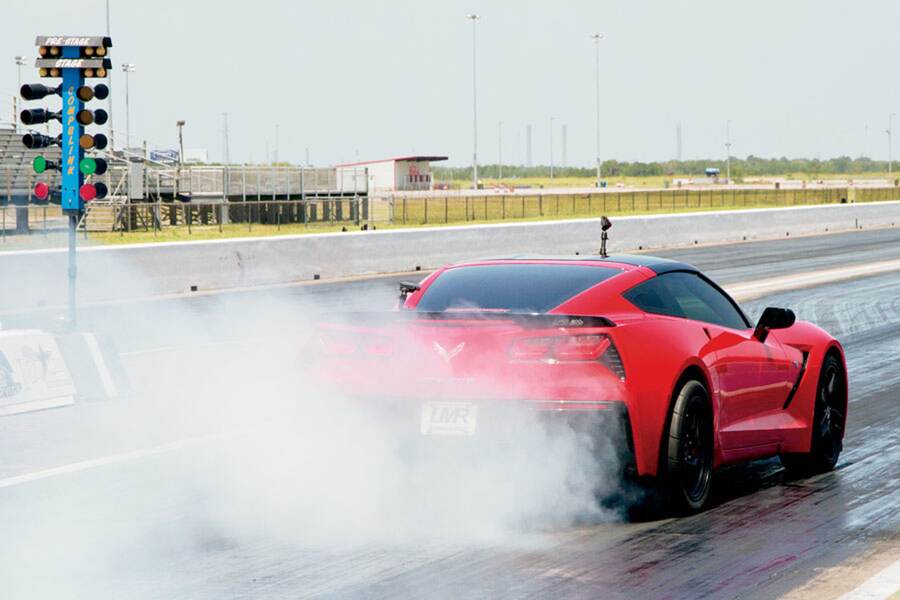 The LT1’s bottom end and cylinder heads remain stock, but a special LMR turbo cam works to maximize the effect of the twin 62/66mm Precision turbos. Also contributing to optimum power efficiency are special 38mm wastegates teamed with Tial blow-off valves. LMR custom fabricated a throaty exhaust system to work with the turbo setup, as well as another breather system to help alleviate the aforementioned engine-pressure issues. The result was 832 hp and 744 pound-feet of torque at the rear wheels—enough to seriously imperil that 9.99-second figure.

Further along in the drivetrain, the factory 6L80E automatic was treated to an LMR Stage 3 transmission upgrade and a Circle D multidisc torque converter. Finally, LMR co-founder Stephen Fereday performed a custom, dyno-based computer tune to ensure that everything was working in concert. And while our Baytown session revealed an initial reluctance on the part of the automatic to shift into Second gear on command, the problem was quickly sorted and the car was laying down times in the low 10s.

The heat wasn’t helping. It was a 98-degree (F) day, with track temps hovering in the 148-degree range. The personnel from Royal Purple Raceway were a big help, treating the track and burnout area each time to improve the results, but putting all of those 832 horses to the track was bound to prove daunting. Having already shod the C7’s back end with Mickey Thompson P305/35R18 ET Street Radials for extra bite, the LMR crew resorted to icing down the intake manifold between runs to compensate for the intense heat. 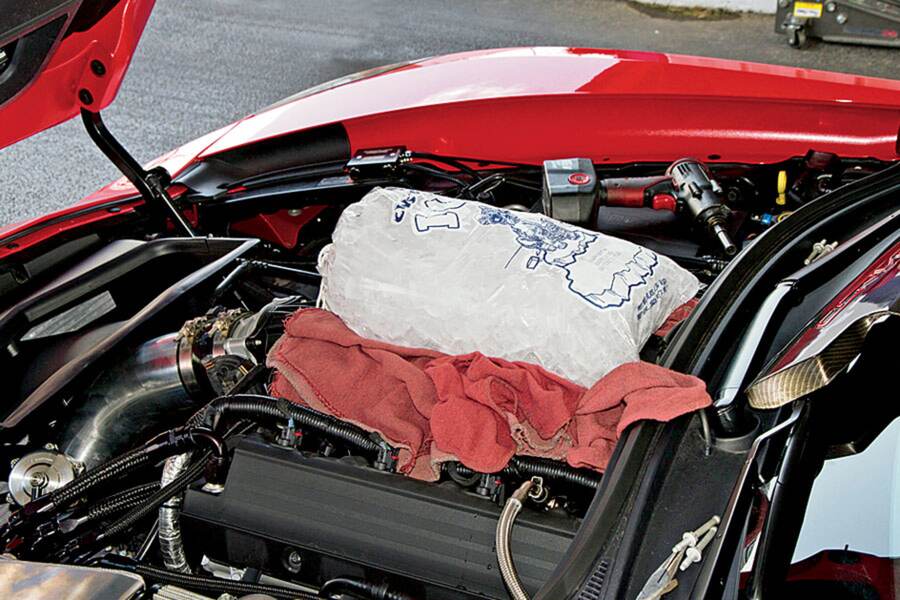 Finally, everything worked together and Fereday ripped off a blistering 9.95 pass at 144.46 mph, effectively laying down a gauntlet at the feet of other C7 tuners. And how did the supercharged LMR Vette compare? Fereday managed a seriously traction-hampered, but otherwise drama-free, 11.20 at 137 mph on Toyo Proxes R888 road-racing tires. With stickier rubber, this is an easy 10-second car.

We left Houston seeing red—Torch Red and Crystal Red, that is. Both cars were a blast to drive and fully capable of running quarter-mile times that only full-on drag machines could have managed a few years ago. So why does LMR make two versions with the same raw muscle? Because these cars make power in different ways and appeal to different drivers. The supercharged C7 is ideal for back-roads-carver Horner, while Brown’s nine-second C7 is heading back to LMR for a 416-inch stroker motor that he hopes will break him into the eights.

“I’ve had both [supercharged and turbocharged], but the turbos seem more extreme,” he says. 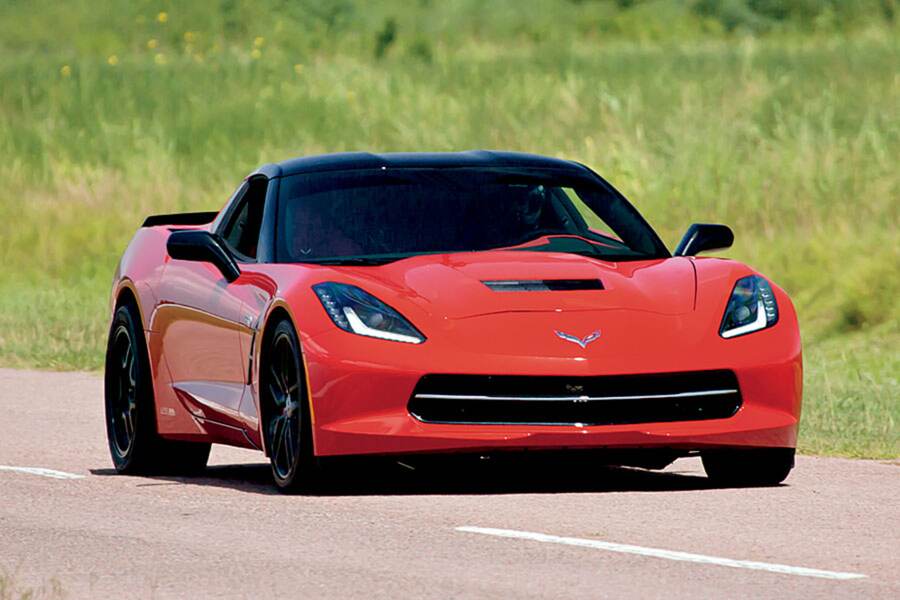 While any 800-hp Corvette arguably borders on the extreme, it’s comforting to know that, thanks to LMR, you’ll always have options.

So how does an 800-hp turbocharged C7 feel from behind the wheel? Well, despite the fact that the car is fully street legal, with a track-oriented computer tune it wasn’t happy trundling around at low speeds. The LT1 engine sported a healthy lope and sounded just as mean as it ran. As with all Z51 C7s, the handling was excellent no matter which Drive Mode Selector setting was employed. On the bumpy return roads, the Touring mode was better, but on a big, smooth skidpad (which served as an impromptu autocross course), the Track setting was naturally more responsive. 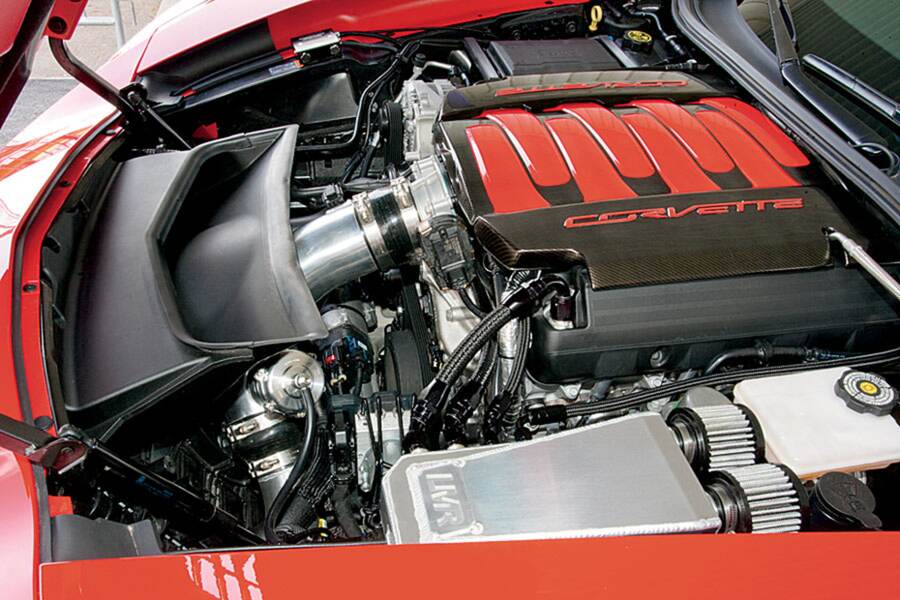 Since both C7s were customer cars, I didn’t make any full-bore passes down the strip. But based on the partial runs I did make, I can say the stock underpinnings do an admirable job of coping with the extra power. (The turbo car was fitted with forged-steel rear axles, just to be on the safe side.) And while the manual seven-speed gearbox in the blower car was a delight to use, the turbo’s six-speed automatic made driving easier and shifts faster for drag racing.

Was adding 340 turbo horses for an extra $30K a better deal than the $20K tariff for the supercharged LMR800 package? It’s a difficult comparison, since the turbo car was running that cantankerous race tune, while the supercharged C7 was set up for daily driving. LMR techs assured me that with street-oriented ECM programming, the turbo car is actually quieter and feels tamer, but you couldn’t tell it by these two examples.

If I were picking an 800-hp C7 for weekend street or road-circuit use, I would take the supercharged version and its excellent manual box. But if I were a straight-line kind of guy, and that extra $10K was chump change, there’s no doubt an LMR800 turbo monster would be parked in my garage. 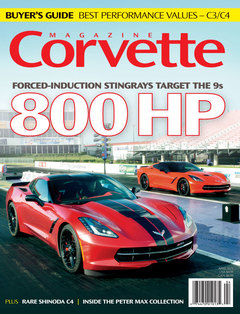