The L88 blew in like a hurricane--and vanished soon after. Forty-eight years on, we take a look back at the remarkable run of this race-bred legend 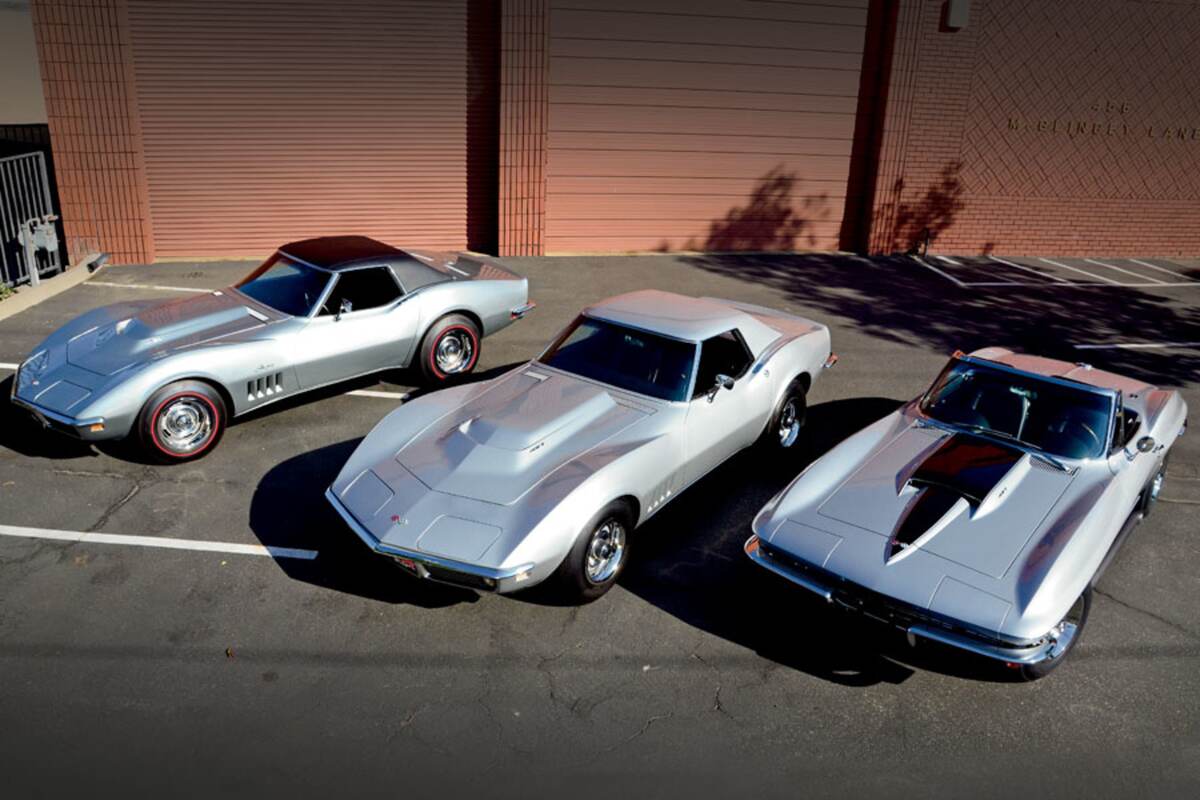 While much has been written about the storied L88 Corvette, one anecdote in particular sums up the thunderous impact this track-bred machine had on the automotive landscape of the late 1960s. The story comes courtesy of noted Corvette racer Dick Guldstrand, who shared it during a Petersen Museum event held a few years back.

According to Guldstrand, in 1967 he and Bob Bondurant flew into Orly Airport in France, to pick up the Dana Chevrolet L88 coupe that was scheduled to compete at that year’s Le Mans 24-hour race. Since no transporter was provided, they had to drive the car to the track. The thinly veiled racer was decked out in patriotic red-white-and-blue livery and not remotely street legal, with open side pipes emitting a blast that cut the tops off of daisies as the pair roared through the countryside. No one had heard or seen such a monstrous Americaine muscle car in these parts up until then, much less felt one.

As the two young guns barreled into a small French town with a rotary intersection, they spotted a gendarme in blue uniform standing atop a podium in the middle, directing traffic. Surely they would be stopped and the car impounded, Guldstrand feared, impeding their efforts to arrive in time for the start of the race. 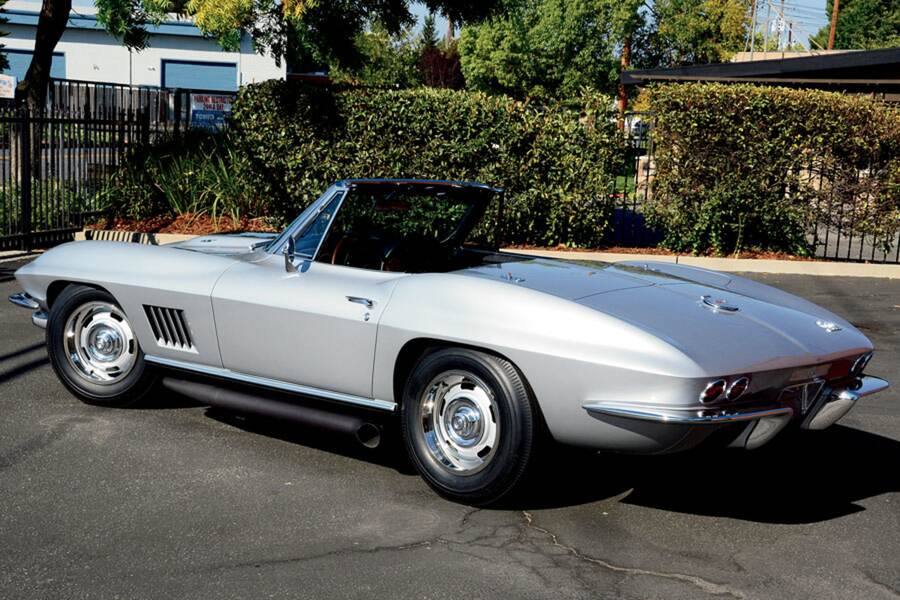 Rather than flagging them down, however, the hapless officer evidently realized there was simply no point in attempting pursuit in his underpowered Peugeot patrol car. So he snapped a sharp salute and waved them on, and they went about their business. Such was the commanding presence of the L88 Corvette, which went on to become a crowd favorite at the Circuit de la Sarthe.

As for Guldstrand and Bondurant, they would lead the GT class in the Dana Chevrolet car for nearly half of the 24-hour race before retiring due to a broken piston wristpin. Along the way, Guldstrand set a speed record of 171.5 mph on the famed Mulsanne Straight.

That’s exactly what Corvette chief engineer Zora Arkus-Duntov had in mind when he created the L88: to win races in the big leagues. Yet this competition-grade car was ostensibly available for street driving (as required for FIA GT and SCCA A-Production homologation), even if it rarely made it there. Since the L88 was essentially a production race car, and Chevrolet was ambivalent at best about track competition at the time, orders were not merely avoided, but actively discouraged. As a result, prowling the streets in a real-deal L88 was—and remains—a thrill enjoyed by a fortunate few. 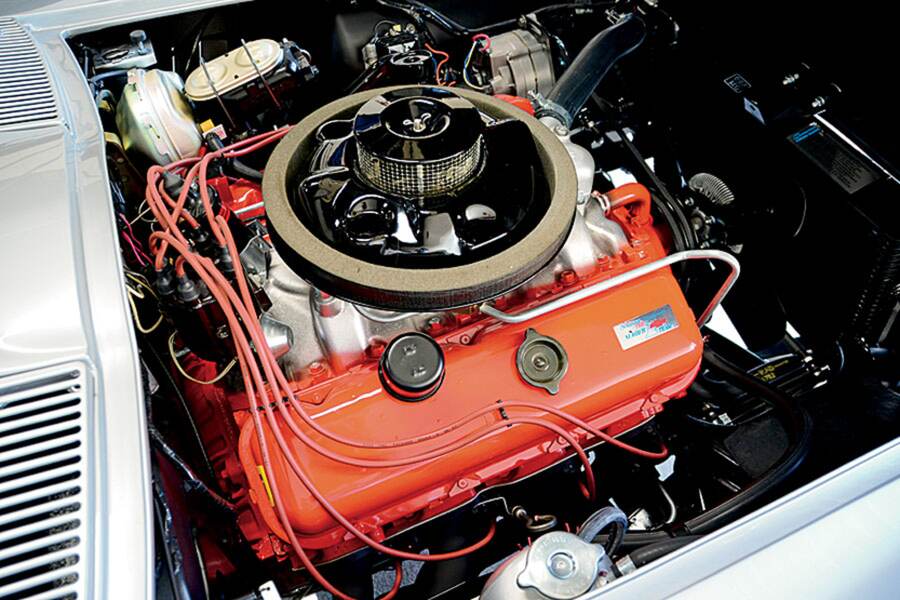 Prominent among that elite group are noted car collectors Len and Linda Perham. At various times the Perhams’ arsenal of automotive weaponry has included the very first Shelby GT350, an authentic ’69 Trans-Am Mustang racer, an ultra-rare ZL1 Camaro and a Shelby King Cobra, among several other prized vehicles. Len also owned a gold ’69 L88 coupe with only 2,700 original miles before selling it last spring.

Nice cars, all, but naturally we were drawn to the couple’s current trifecta of L88 Corvettes. It’s rare enough to come across an L88 in the first place, let alone three of them, all convertibles finished in Silver Pearl. (Total production numbers vary by source, but they’re generally believed to be just 20 in 1967, 80 in ’68 and 116 in ’69.) While each of these cars is historically significant on its own, having access to a “complete set” furnished us with a rare opportunity to see how the L88 Corvette evolved over its three-year production run.

It took the Perhams several years to acquire all three L88 Vettes, the ’67 and ’68 both coming from auctions, and the ’69 through a private party. Campbell Auto Restoration in Campbell, California, which takes care of the cars, recently performed a full, body-off restoration of the ’67 that consumed a full year. “The fit and finish needed to be top notch,” notes C.A.R.’s Mark Schwartz, in view of the car’s exclusivity. He likens it to “the Ferrari 250 GTO of Chevy Corvettes.” 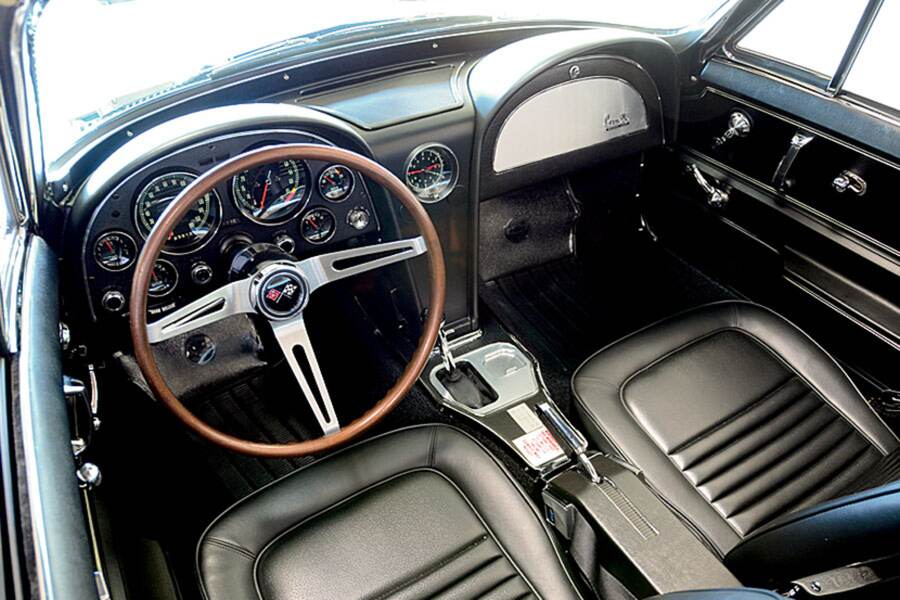 Before the Perhams purchased it, the ’67 had passed through the hands of several owners and been raced in a variety of venues, from hillclimbs to dragstrips. In an odd and tragic coincidence, the other two L88s were bought new by Vietnam-era servicemen who were both later killed in action, and the cars eventually sold off by their parents.

A bit more historical context is of value here, in reference to another standout currently in the Perhams remarkable collection. After all, the L88 Corvette and King Cobra represent two of the toughest combatants from a long-standing rivalry between the Bow Tie and Blue Oval banners, a game of one-upmanship that still rages today. Both cars came armed with 427 trigger-happy cubes, yet they couldn’t be more different in looks and personality.

The Cobra, originally a roadster, was fitted with a “Le Mans” top to smooth out its objectionable aerodynamics that Shelby once likened to that of a shoebox. The lines are otherwise stubby and muscular. It’s a rowdy thug ready to pick a fight. 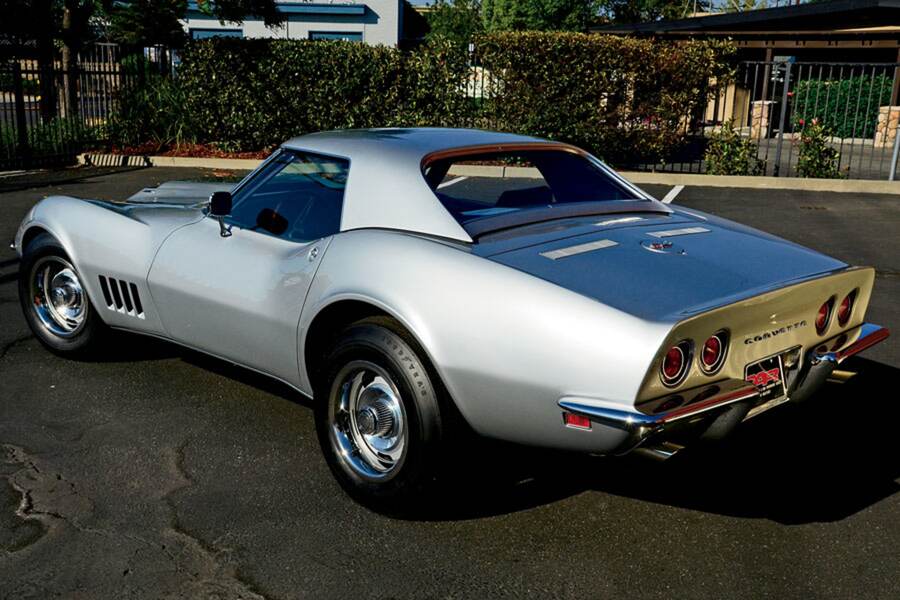 In dramatic contrast, the L88 Corvette projects the cosmopolitan finesse of its creator—elegant and refined. Yet underneath that uptown persona is a cunning killer, capable of a quick, deadly strike at the drop of a silk hat.

As for its engine, every classic-Corvette fan knows of the mighty aluminum-headed L88 of the late 1960s. This rompin’, stompin’ legend of an engine took on the best of the Hemis and the 427 Cobras on the track. But as noted previously, there was one place you almost never saw an L88, and that was on the street. This was no accident, as Chevy had another alloy-topped 427, the L89, that was designed specifically for on-road use.

To understand why, we have to consider what the L88 was—and more important, was not. Chevy had spent the 1964 racing season watching its 327 Corvettes get their doors blown off by the 289 Cobras, and with Shelby’s snakes due to get the fire-breathing 427 Ford the following year, things could only get worse. 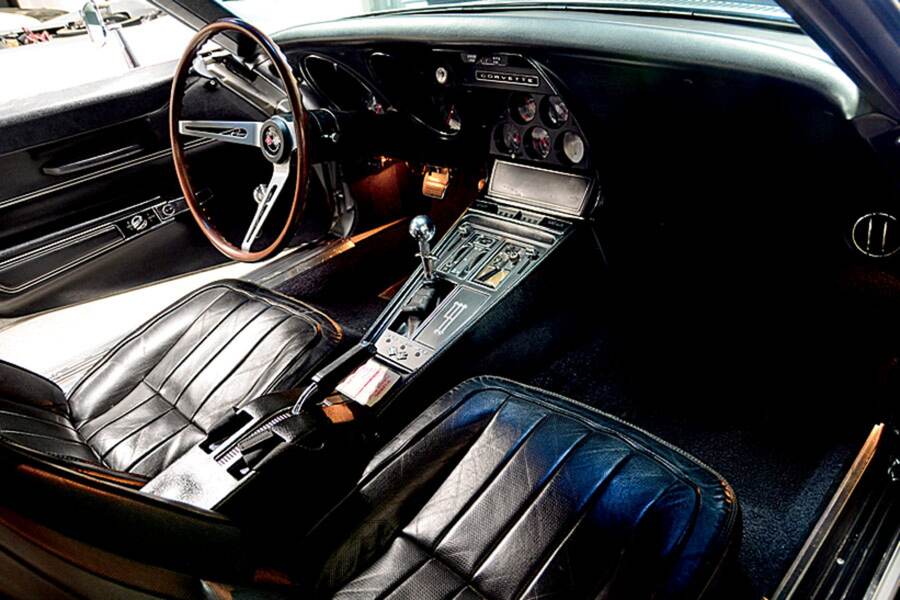 To stave off this impending attack, Chevy engineers had been secretly developing a new big-block engine, the Mark IV, testing it in NASCAR stock cars during the 1963 season. The first shell was fired in anger in 1965, when the company stuffed a 396-inch version into the Sting Ray.

The 396 Corvette had 425 advertised horsepower and was fed by a single Holley four-barrel carb. In 1966 the engine grew to 427 inches, and the horsepower war was on. The street 427 was offered in 390- and 425-hp forms, but unofficially Chevy was working on a racing version to put the Corvette back on top of the heap of production sports-car racing.

The prototype L88 engines were given to Roger Penske to test and race in a ’66 Corvette coupe. The sturdy Sting Ray soldiered through the ’66 Daytona and Sebring enduro races to take GT class wins in both. 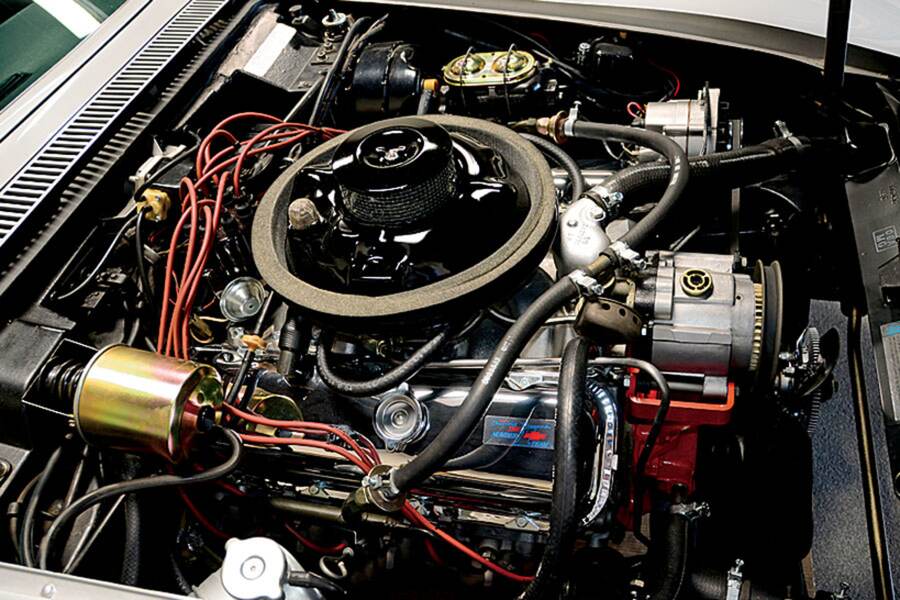 The L88 cast-iron blocks were all built at the Tonawanda, New York, plant and fitted with Can Am–spec aluminum heads (boasting 2.19-inch intake and 1.84-inch exhaust valves); an ultra-aggressive, mechanical-lifter cam; and a unique, open-plenum intake manifold topped with an 850-cfm, dual-feed Holley 4150 carb. With a compression ratio of 12.5:1, the L88 wasn’t happy drinking even the premium leaded street fuel of the day. C.A.R.’s Schwartz notes, too, that the valvetrain technology was lacking in some respects: springs broke on occasion, causing a valve to drop and throw out a piston. This exotic, temperamental engine presented many problems for a Chevy marketing department accustomed to peddling workaday sedans.

Another hang-up involved the exhaust manifolds. Racers needed different configurations, depending on whether they were going drag or road racing. Since Chevy engineers didn’t want to provide two exhaust systems with each car, they fitted the deep-breathing L88s with the same restrictive cast-iron manifolds used on lesser street engines. These effectively choked the big mills stock form, though the expected power materialized as soon as the new owner bolted on a proper set of headers.

Also, with around 560 hp on tap, and a customer base eager to use it, the L88 was sure to eat up more than its share of normally warranted parts such as clutches, gearboxes and differentials. It was also expensive to hand assemble, and consequently Chevy didn’t want to tool up for a large production run. Drastic action was called for if the company was to avoid selling too many of these race-bred monstrosities. 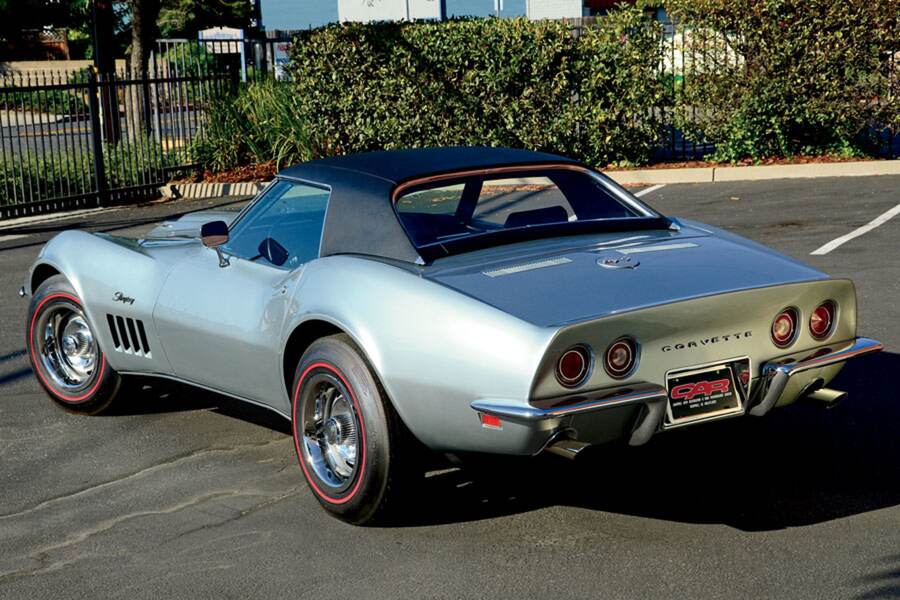 The company addressed the problem in part by rating the L88 at only 430 hp—akin to calling the thoroughbred Seabiscuit a plow horse. The RPO L88 package could only be ordered with a long list of racing options, such as a transistor ignition, a heavy-duty suspension and a Positraction limited-slip unit. There was also a litany of things that could not be ordered on an L88 Vette, including air conditioning, power steering, and a heater or defroster. All this combined to make the L88 less attractive to stoplight poseurs, but it did little to diminish the car’s desirability to racers.

Other mandatory factory upgrades included a Muncie M22 Rock Crusher four-speed (or, starting in ’68, an M40 Turbo Hydra-Matic) transmission; power-assisted, heavy-duty brakes; an F41 heavy-duty suspension (with unique coil springs and dampers); and a special cowl-induction hood. Thus armed, the L88 package doubled the price of a standard Corvette, to about 10 large.

With the L88 out defending Chevy’s reputation on the track, another version of the 427 was needed to carry the torch on the street and in the showrooms. In 1967 Chevy introduced two new 427s, both rated at 435 hp—5 hp more than the official L88 figure. The L71 had cast-iron cylinder heads, while the L89 option added aluminum units. Both engines had the same hot, mechanical-lifter camshaft, though it wasn’t as radical as the one employed in the L88. More important, both had “only” 11:1 compression, so they could use then-widely available fuel. These two engines also shared a Tri-Power induction setup featuring three two-barrel Holley carbs, marking GM’s first use of the “three deuces” since the 348 mill of 1958. In street trim, and fitted with standard cast-iron exhaust manifolds, these two 427s could actually outrun a stock L88 up to 60 mph. 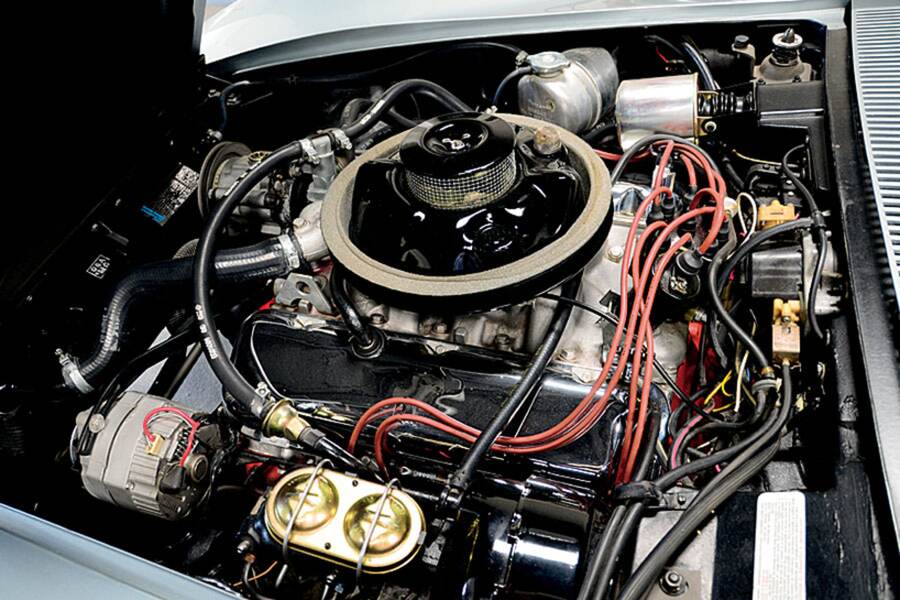 The L88 and L89 were rare options in 1967, but the latter caught on in 1968 when the new Mako Shark–inspired body was introduced. The new Corvette and the L89 were a solid match, good for quarter-miles in the mid-13s on stock bias-ply tires. It was a comfortable arrangement for Chevy: the wild L88 ended the Cobras’ winning streak on the track, while the toned-down L89 defended Bowtie honor on the street.

In 1969, the L88 got a new set of “open chamber” aluminum heads, but the L89 kept the same heads as the earlier L88. Stronger connecting rods and improved pistons were also added. For 1970 a family of lower-compression 454s replaced the 427s, while the aluminum heads and Tri-Power carbs bit the dust. The lights were dimming on the horsepower party.

Looking back on this wondrous era, it’s clear that in the heat of conflict, the front lines often blur, shifting by feet and inches as the battle rages and technology marches forward. While the King Cobra initially did some serious damage, the L88 Corvette eventually returned fire, decisively. Yet with emissions standards tightening and insurance premiums on the rise, the L88 was decommissioned after the 1969 model year. This war was the heady stuff of legends and heroes, the likes of which we’ll never see again. So, like that astute gendarme standing at attention atop the rotary’s podium, we salute this timeless piece of Corvette history. 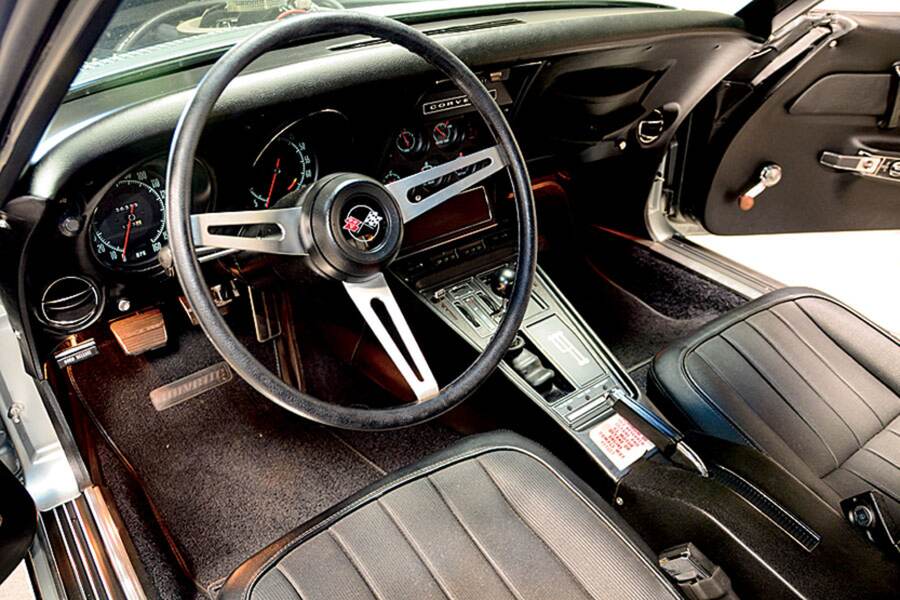 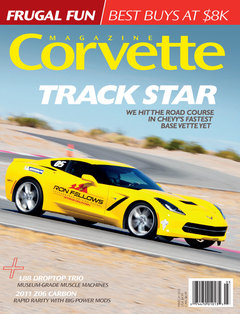