With a 599-horsepower supercharged engine and a retina-searing paint job, this is not your average Grand Sport. 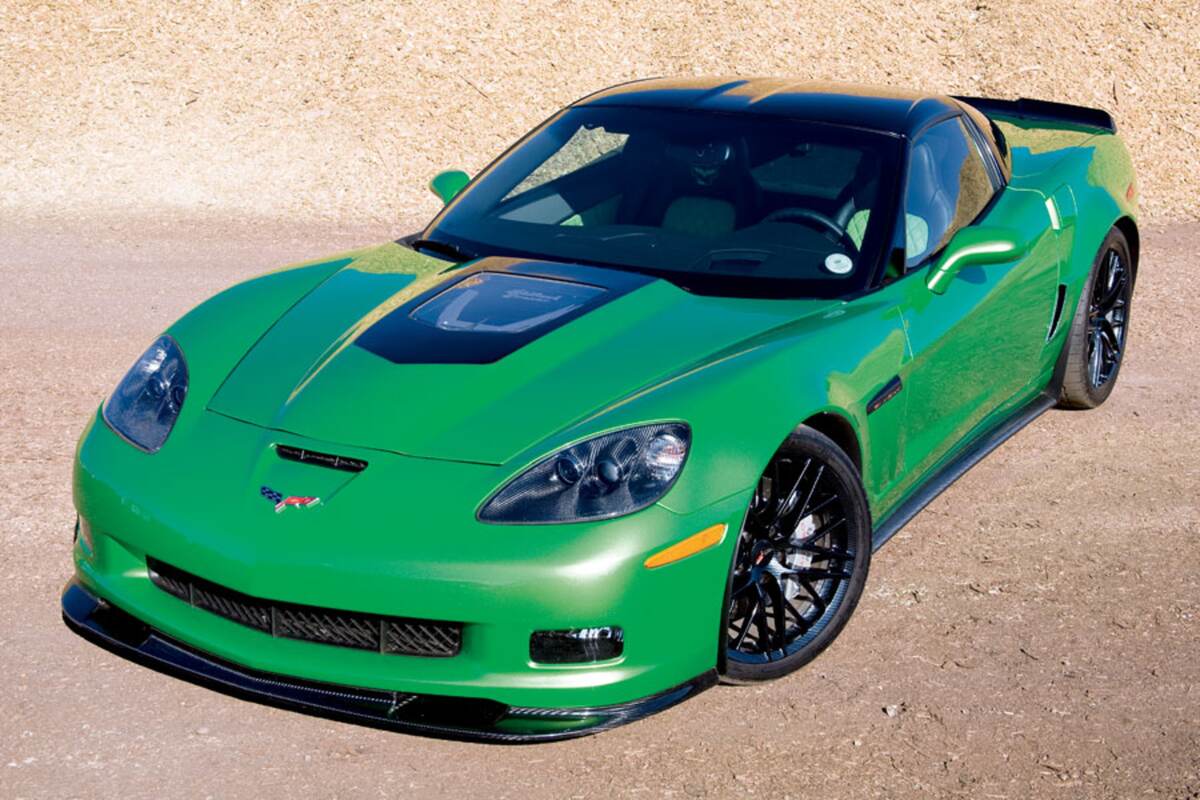 Cornfields hurtle by as Rollie Purifoy puts his dealership’s Synergy Green Corvette through its paces. With over five decades of operation, Purifoy Chevrolet isn’t your everyday dealership, and this machine is no ordinary Corvette. “Over the years it has become commonplace for us to build special, one-off Vettes just so we can have that recognition of having things that other dealers don’t,” says Purifoy, as he guides the car right then left through a chicane, of which there are plenty on the backroads north of Denver, Colorado.

“Getting into the Corvette business was something that my father and I did not agree on,” says Purifoy. “He told me that selling Corvettes in Fort Lupton would never work at all. Well, I decided different and put my best efforts towards being one of the best Corvette dealers in Colorado.”

As we blast through the Northern Colorado countryside, I notice that the numerals on the head-up display are much higher than the posted speed limit, but since Purifoy was a helicopter gunner in Vietnam, I figure he can handle the distraction of fielding questions while driving, so I ask him to tell me more about his father, whose name was also Rollie, and the founding of the Chevrolet dealership. 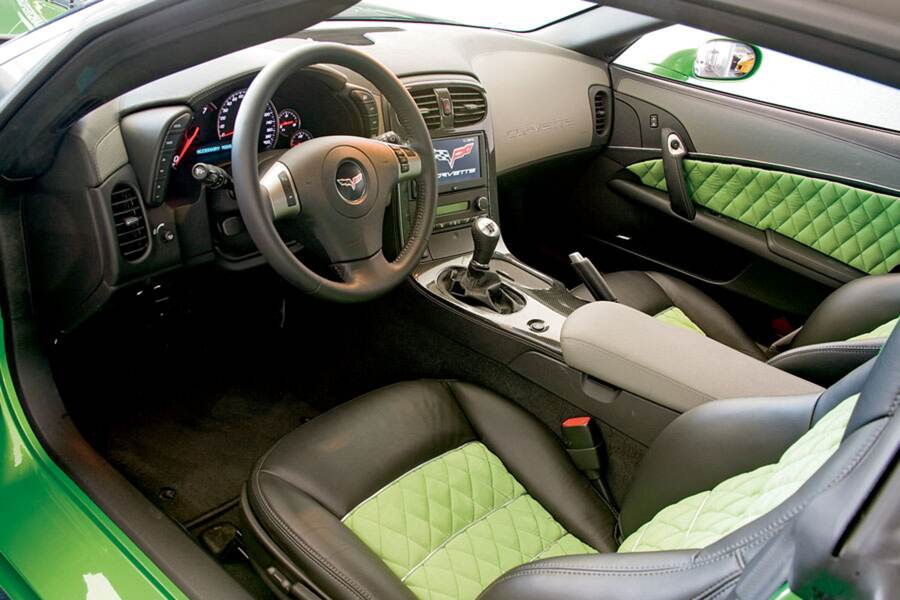 “My father left his home in Mobile, Alabama in 1929, after his father was killed in a dam accident in Tipton, Missouri,” says Purifoy. “He sustained serious injuries in World War II before returning home to start a rental car company called the U-Drive-It system. He later found and bought the dealership in Fort Lupton.”

Approaching a tight corner, Purifoy applies the brakes and downshifts into second, then quickly gets back on the gas; the supercharged LS3 V8 instantaneously catapults us back up to warp speed. With the unblinking concentration of someone accustomed to laying down cover fire for fellow soldiers in battle, Purifoy keeps his eyes on the road as he tells me more about his father.

“My Dad was a hard-driving, very honest, very ethical man. He truly was a jack-of-all-trades and a master body man. He also was a 32nd-degree Mason. As far as his connections at GM went, the ones that he had were ones that he earned by being an honest man. He was liked and respected by all that knew him. To this day, the largest funeral I have ever attended was my father’s—it says a lot about a person.” 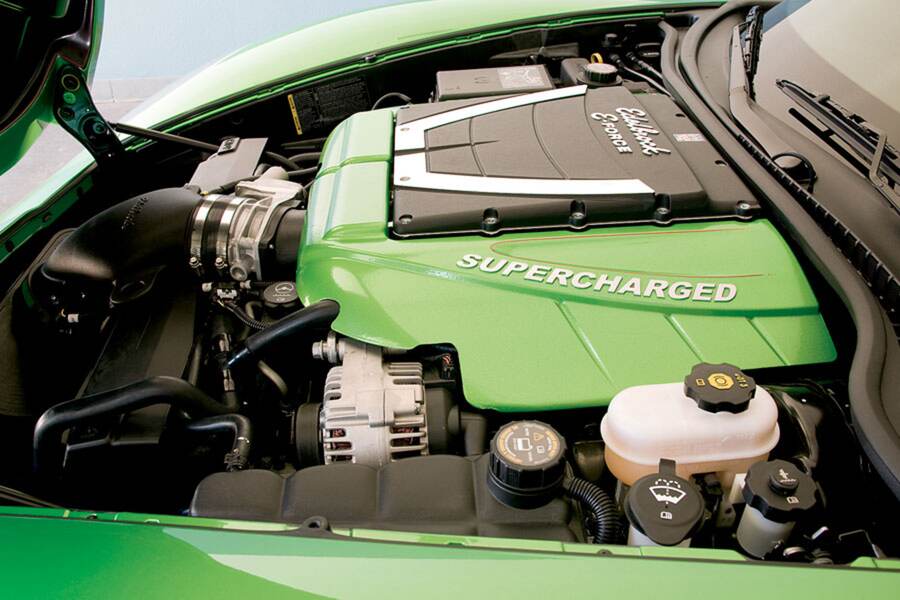 A moment of silence fills the Grand Sport’s cabin and I sort of feel like the spirit of Rollie the elder may be embedded somewhere in this custom Corvette. We pull over to the side of the road to take a break. The tic-tic sound of the oil draining into the sump and the cry of a raven in the distance seem to be the only sounds to be hear in this dramatic countryside. We stretch our legs and walk around the vehicle. Draped in its verdant hue and accessorized with carbon-fiber aero bits—front splitter, rocker-panel extensions and rear spoiler—it is truly a mesmerizing piece of machinery. The silence is broken by Purifoy. “I wanted to build this as soon as I saw the first Synergy Green Camaro roll off the transport,” he says. “Well, you want to drive it?”

I climb behind the wheel and push the starter button. The engine roars to life, a throaty cacophony fills the arid landscape. Impending doom, cloaked in green, is about to cross the land. Mixed in with the eight-cylinder rumble is the eerie whine of the Edelbrock E-Force supercharger, which boosts this Grand Sport’s horsepower from 436 to 599. With an approving nod from Purifoy, I slip the car into first gear, bring the revs up to 4,000 rpm and dump the clutch. Thanks to its advanced traction-control system, the car launches with hardly a chirp from the rear tires, despite having 547 lbs-ft of torque to contend with—123 more than stock. Before I know it, we’ve hit 60 mph and I’m grabbing second gear. Even after I shift into third, the car’s superbike-like acceleration continues to push us back into the specially embroidered seats, as the road ahead becomes a gray blur.

Having remained silent up to this point, Purifoy gives me a bit of advice: “Being on a two-lane road north of 100 mph doesn’t give you too much of a margin for error when you’re surprised by some guy pulling out of his yard in a John Deere.” His words fall on deaf ears as I continue to climb up through the six-speed gearbox. 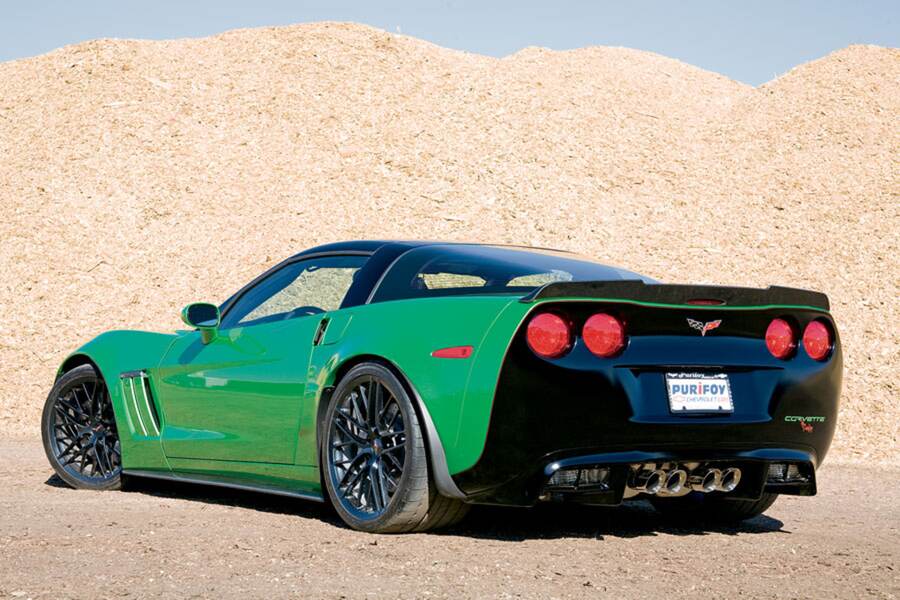 A furtive glance at the head-up display informs me that we are just shy of a buck and a half. The read-out is digital. It is green. It hovers holograph-like in the middle of the windshield. I feel like Luke Skywalker. Princess Leia is beside me and we are going back to Tattoine for a two-week desert vay-cay. Oh wait, that’s Rollie Purifoy, not Princess Leia, next to me and he is waving his hands. I am wrenched from my fantasy when I see a white pick-up truck in the distance backing slowly out of a driveway into our path. The farmer at the wheel is blissfully unaware that he and his poultry are about to be chick-filleted by a screaming-green 3,200-pound projectile. It’s too late for me to slam on the brakes; even if this Grand Sport had been upgraded with ZR1-spec carbon rotors, braking wouldn’t be an option.

Just as I’m planning my avoidance strategy, another pickup truck appears in the other lane. With just moments to react, I choose to veer left into the path of the oncoming vehicle, sweep around the first pickup and accelerate hard back into my lane. Thanks to the Corvette’s lowered suspension and the engine’s instant throttle response, I’m able to pull off the maneuver without ending up on the evening news.

I look over at Purifoy, expecting him to bring my test drive to an abrupt halt. Instead, he reaches over and shuts off the electronic driver-aid system. His newfound faith in my abilities is quickly put to the test as we dive into a tricky off-camber corner. I’ve braked too late, forcing me out of prime position for exiting the corner. Like the machines nearby in the alfalfa fields, I’m plowing. The spirit of Juan Fangio or, more likely, Zora Arkus-Duntov takes over and I hit the gas. The car goes from understeer to oversteer a little more quickly than planned. I manage to correct the slide, but not without dropping a rear tire (and the carbon-fiber-clad 19-inch rim it surrounds) off the road into the dirt. 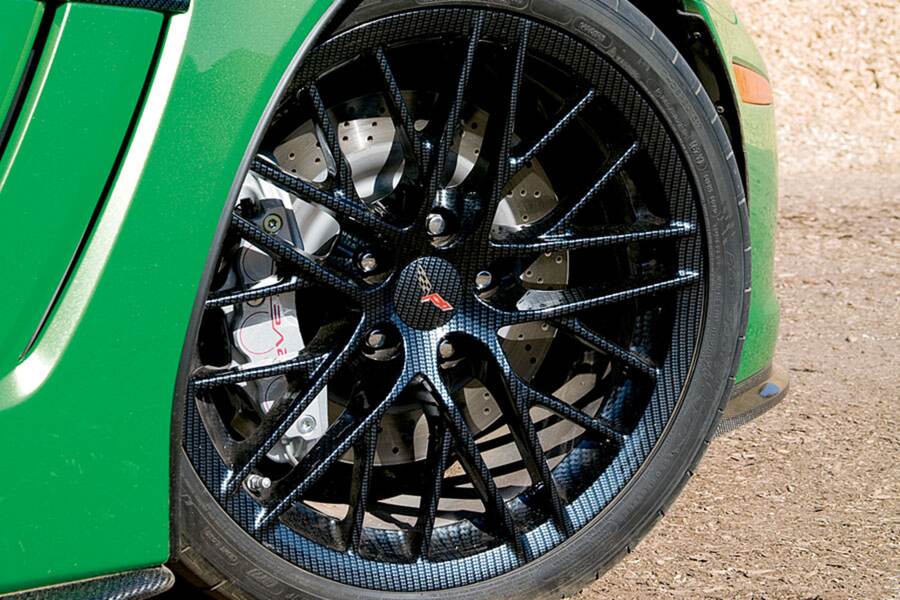 Again, I look over at Purifoy to see if I’m going to be banished to the passenger seat. The silver-haired patriarch reacts with astonishing equanimity considering I almost spun his $120,000 project car into the weeds. “The blower cars accelerate so hard in second and third gears that you can have your hands full before you know it, but, damn, it’s fun,” he says with a laugh. I keep my seat, but proceed back to town at a more civilized pace.

This special Corvette Grand Sport may have been built to celebrate Purifoy Chevrolet’s 50th anniversary, but it was also built to make a sale. The car’s current owner is Linda McNulty. She says the car not only turns heads, but makes people think its occupants are VIPs. “One night we went to Elway’s restaurant and everyone started taking pictures of the car,” she says. “As the valet helped us into the car, people started asking if we were celebrities or with one of the sports teams.”

McNulty shares the Corvette with her husband, but also lets her 22-year-old daughter and 19-year-old son drive it; now that’s a great mom. Speaking of her son, McNulty says, “He had to get used to the power behind this car.” After driving this supercharged machine, I feel the same way. 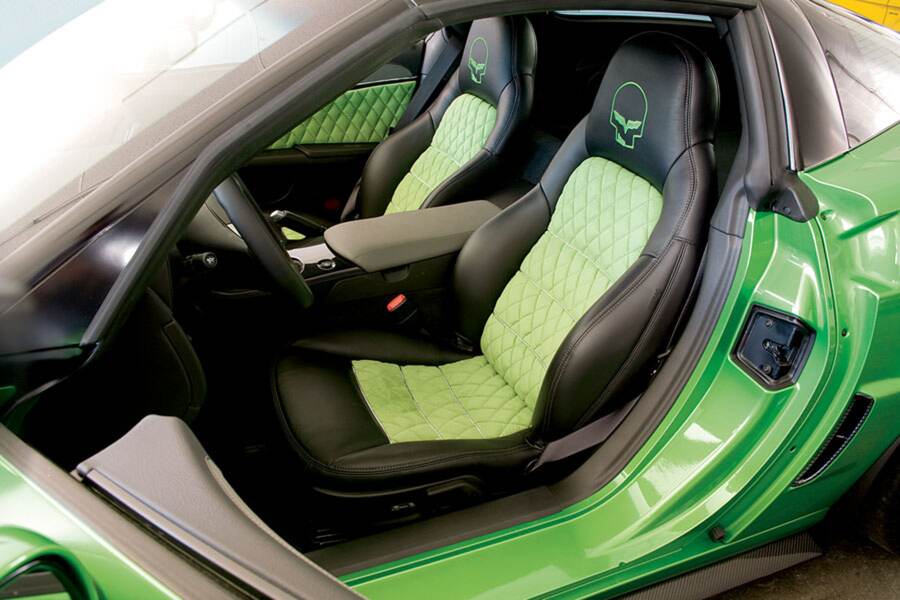 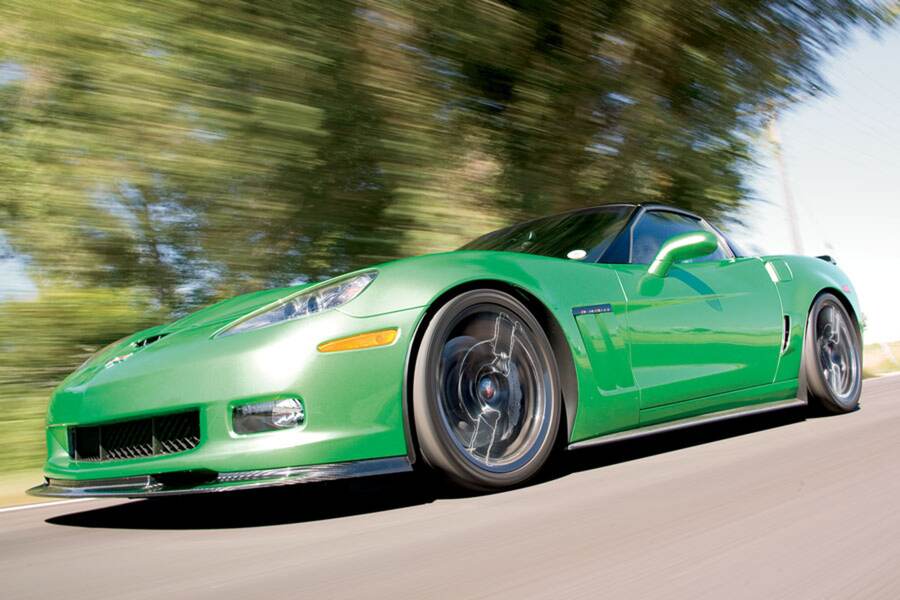 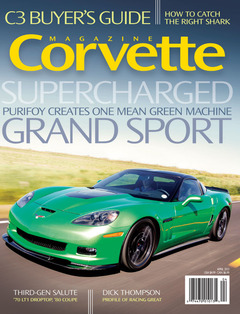