To the consternation of Corvette purists, the numbers on this '66 convertible don't match, it rolls on aftermarket wheels and its engine has been breathed on—but its owner would have it no other way. 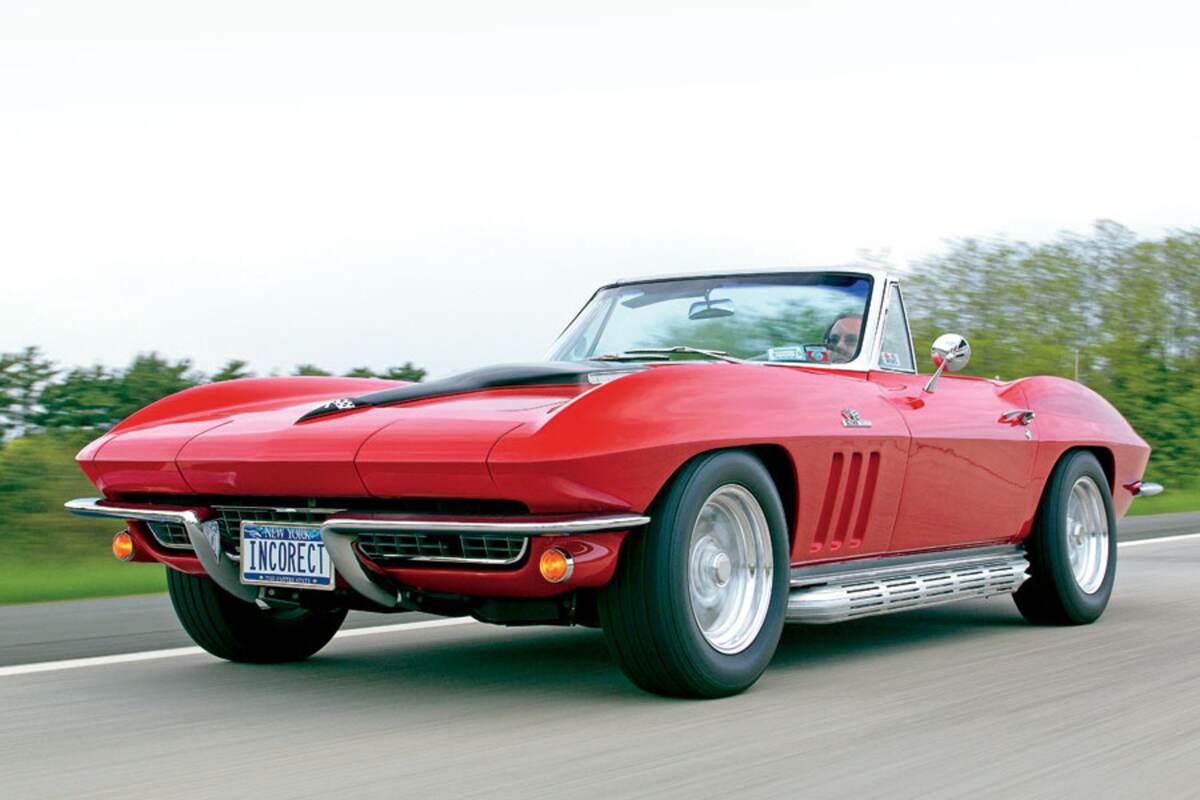 The vintage-car hobby never sits still for too long. Like fashion trends and political winds, it’s constantly in flux. Back in the 1950s and ’60s, when today’s collectible Corvettes were new, customizing was all the rage. That changed dramatically in the 1970s, with a clear shift toward returning modified cars back to their stock configurations. By the time the 1980s rolled around, it was widely considered blasphemous to modify a vintage Corvette and those who did were looked upon as obtuse and boorish in certain circles.

New Yorker Rich Fingerhut doesn’t much care if others in the Corvette hobby label him obtuse, boorish or even worse. He’s been madly in love with cars his entire life and has always been fascinated with modifying them. “If I could have put headers on my pedal car when I was a preschooler, I would have!” he says with an ear-to-ear smile.

Fingerhut traces his fascination with all things automotive back to his car-loving cousin Robert. Even though cousin Robert is 13 years older than Fingerhut, the two have always been close. “He was more like an older brother than a cousin,” Fingerhut recalls. “He got me my first go-kart, and he’s the one who introduced me to the Corvette. I will never forget one day, after constantly telling me about this really cool sports car he was going to buy, he came out to visit with this really pretty girl Renee, who was his fiancee, and this really pretty car, which turned out to be a 1961 Corvette convertible.” 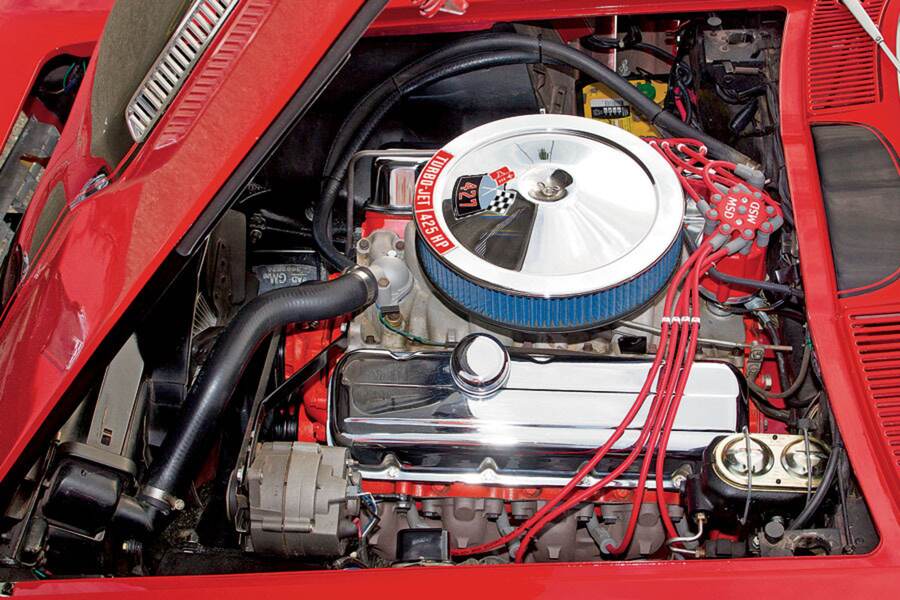 Cousin Robert’s ’61 Corvette was a tired old mule with some serious problems—it wouldn’t go into reverse and didn’t want to turn left because of steering-linkage issues—but that didn’t diminish Fingerhut’s infatuation one bit. “The day I saw that ’61 is the day the fever took hold of me!”

The slightly decrepit ’61 went to a new owner when Robert shipped off to Vietnam. When he returned home, his influence over Fingerhut took up right where it left off. Robert bought a blue 1963 split-window coupe, and when that was stolen, he replaced it with a 1965 and then another ’65. That second ’65, which was Glen Green and powered by a 327-cubic-inch/365-horse engine, is the car that turned love into obsession for Fingerhut, because his cousin actually let him get behind the wheel. “I was only 13 years old when he let me drive it, or I should say try to drive it,” reports Fingerhut. “My shifting skills were awful and I could hardly see out the windshield, but it was still an unbelievable experience.”

After graduating from college and getting his first decent-paying job, Fingerhut began looking around for a late-model Corvette. That was in 1981 and he ended up buying an ’80 with about 8,000 miles on the clock. It had a base L48 engine and wasn’t very fast, but Fingerhut loved it just the same. He subsequently discovered that it had been in a pretty serious accident. Once the consequences of questionable repairs started to appear, he started to consider an upgrade. Fortunately, his finances allowed him to trade it in on a brand-new, all-black 1982 coupe, which he purchased from Kinney Chevrolet in Riverhead, New York. The ’82 served as a daily driver, and Fingerhut racked up about 40,000 miles on it before getting married and selling the car. 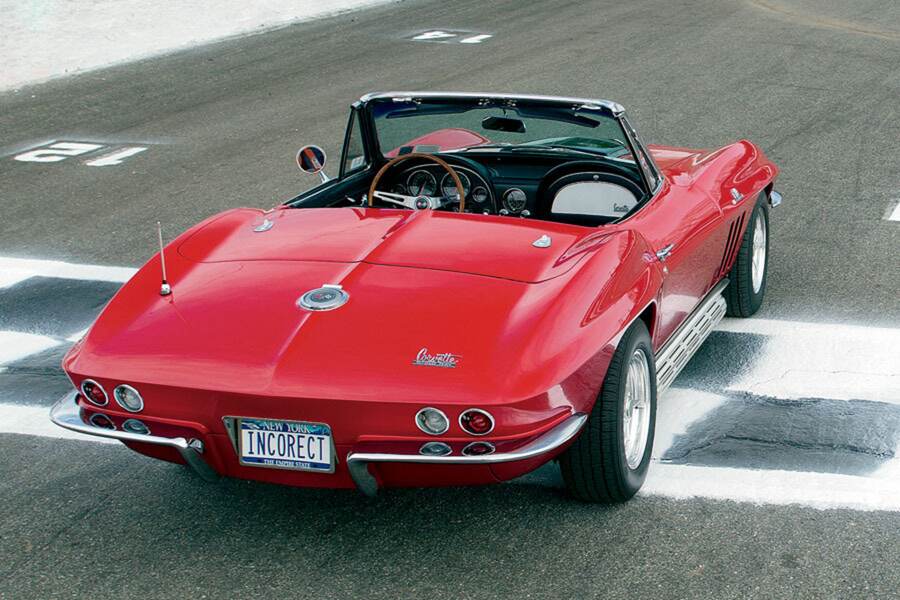 Fingerhut went a lot of years without a Corvette, but buying another one was never far from his thoughts. In 1998, a distant cousin passed away and left him a decent sum of money. “It was a little strange,” Fingerhut says, “because I had only met the guy maybe five times total.” With a good chunk of unexpected cash in hand, and a very supportive wife (wife #2, not the same wife he sold the 1982 for), he went on a mission to satisfy the dream of owning a C2. His first stop was Unique Corvettes, a Corvette dealer that specializes in very high-end cars. He quickly discovered two things: His inheritance was insufficient to buy a collectible mid-year in mint condition, and even if he could afford one, it would be too nice to drive like a regular car.

Enter favorite cousin Robert, who spotted an ad for a decent driver-level 1966 big-block convertible a couple of towns away. “The owner told me right away it was not numbers-matching, and when I went to look at it the first time, he said it was ‘winterized’ (well, it was in February) and the engine wasn’t running, and that he was not going to start it up for everybody that came to look. I figured that the engine wouldn’t run, and he was not being honest.” Fingerhut’s concerns proved unfounded, however. When Spring hit, he went to look at the car again and the owner fired it right up. It ran well and a deal was quickly reached, thus initiating a new chapter in Fingerhut’s Corvette adventures.

From the moment he bought the ’66, Fingerhut drove it as much as possible and found no shortage of critics, particularly at certain car shows. Elitists and know-it-alls were very happy to point out that the big-block hood bulge “wasn’t supposed to be” painted a different color, and things from the redline on the tach to the Hurst shifter were not factory correct. 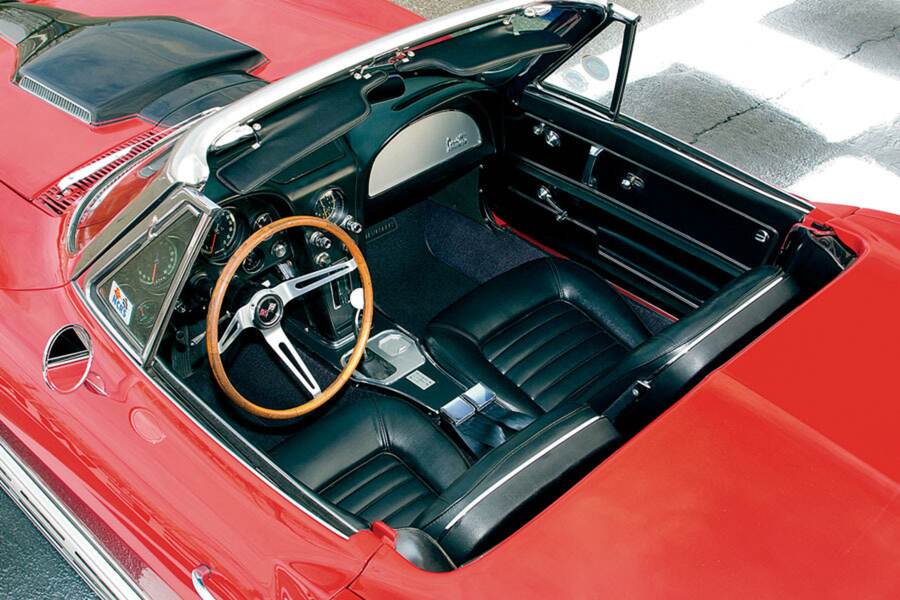 The frequent criticisms didn’t particularly bother Fingerhut, but he grew a bit weary of responding to the same comments over and over. Then one night, when he was feeling a bit restless and couldn’t sleep, he went online to the New York State Department of Motor Vehicles website and started looking for available vanity license plates that would mean something to him. After a short time, he discovered that “INCORECT” was available. “Now when I hear criticism, I point to the plate and smile,” he says.

While the ’66 was in decent running condition when he bought it, Fingerhut has more or less continuously made improvements to the car. Over time, he added a Holley Street Avenger carburetor along with an MSD ignition box, distributor, coil and wires. Later on, the stock wheels gave way to American Racing Hopster rims and new radials. Again, Fingerhut was unconcerned by the finger pointing such mods elicited among Corvette purists; he liked the way they made his car perform and appear.

After Fingerhut started getting active with several local Corvette clubs, he hatched a plan to convert his wife, Marty, from being merely supportive of his hobby to being a devoted fan in her own right. He secretly signed her up for membership in Long Island Vettes, Ltd., a club that he serves as treasurer. Then he convinced her that since she belonged to a Corvette club it was only logical that she should have a car to bring to club functions. It didn’t take too much arm-twisting before Marty decided to put a 2004 convertible in the garage alongside the ’66 droptop. 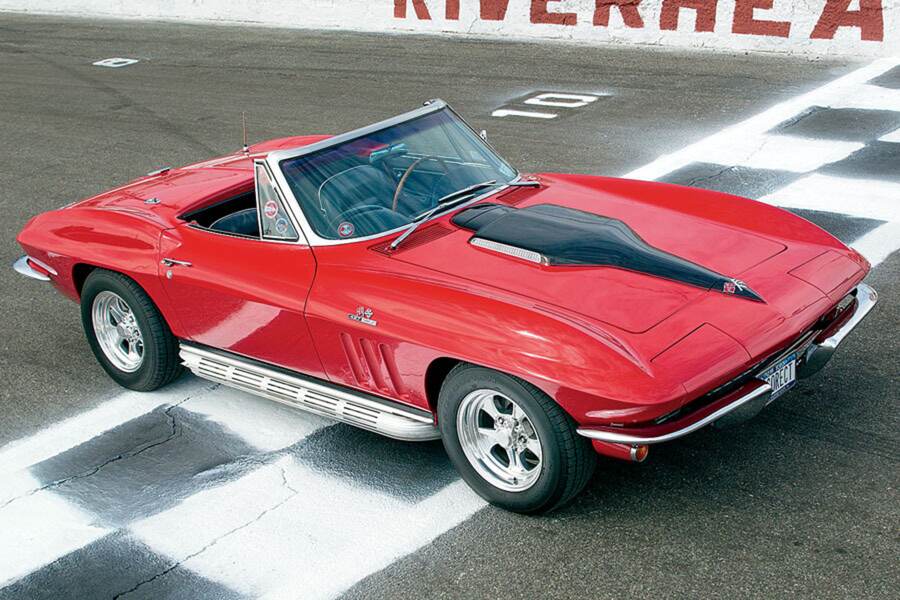 Fingerhut’s mid-year adventure took a sharp turn when the car was diagnosed with a serious chassis problem. Its discovery began innocuously enough, with a friend’s nagging about the unusually large gap at the rear of the driver’s door. Corvette bodies are shimmed to the chassis and adding or subtracting shims at different mounting points can profoundly change door and body-panel gaps. Assuming he just needed some shim adjustments, Fingerhut enlisted the help of his friend, ace Corvette mechanic Rich Puleo. Puleo’s careful inspection revealed a crack in the frame. Rather than trying to repair it in a makeshift way, Fingerhut decided to do it right by removing the body. And of course, while the car was that far apart, he did everything else that made sense—a full-blown body-off restoration ensued.

“Lucky for me, Rich Puleo was willing to take on the project with his associate Mike DiLavore from MAD Creations,” says Fingerhut. “The short version is that the car went to their shop in mid November 2006, and I had it home completed on Memorial Day weekend 2007. Yes, it is possible to do a comprehensive restoration project in a reasonable amount of time!”

Besides repairing the cracked chassis and powder-coating it, Puleo and DiLavore restored the brake system and upgraded it with a much safer dual-reservoir master cylinder. They also rebuilt or replaced nearly every normal wear item in the suspension, steering and drivetrain. In addition, they completely stripped, repaired and repainted the body. 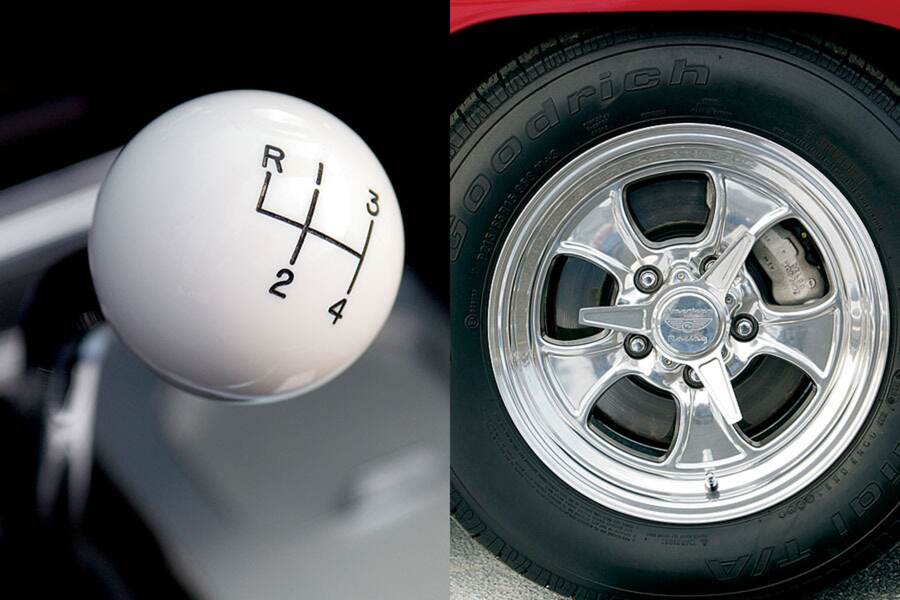 Fingerhut made a conscious choice to not update or upgrade the car by adding power steering and brakes, air-conditioning and the like. Though the steering and brakes feel heavy by modern standards, Fingerhut says he loves the visceral feel his Corvette provides.

The modified 427 V8 didn’t require an overhaul; it was still full of piss and vinegar, exactly how Fingerhut likes it. The Hurst shifter feels just right in his hand, the American Racing wheels look just right to his eye and the bellowing sidepipes sound just right to his ears. It’s no accident that his Corvette has the rough-and-tumble old-school feel of the Corvettes his cousin Robert introduced him to when he was just a kid. 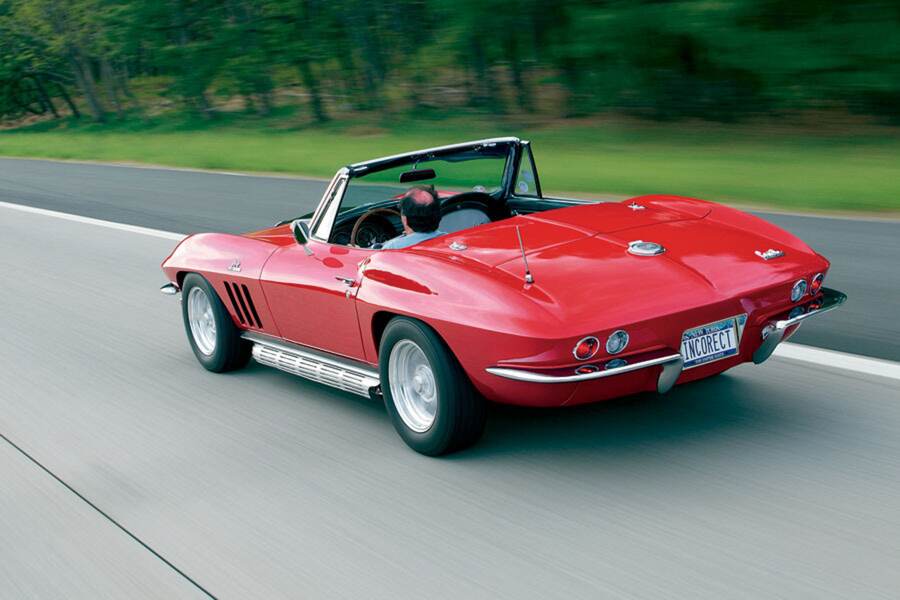 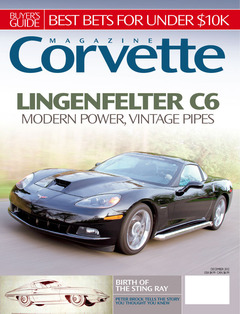 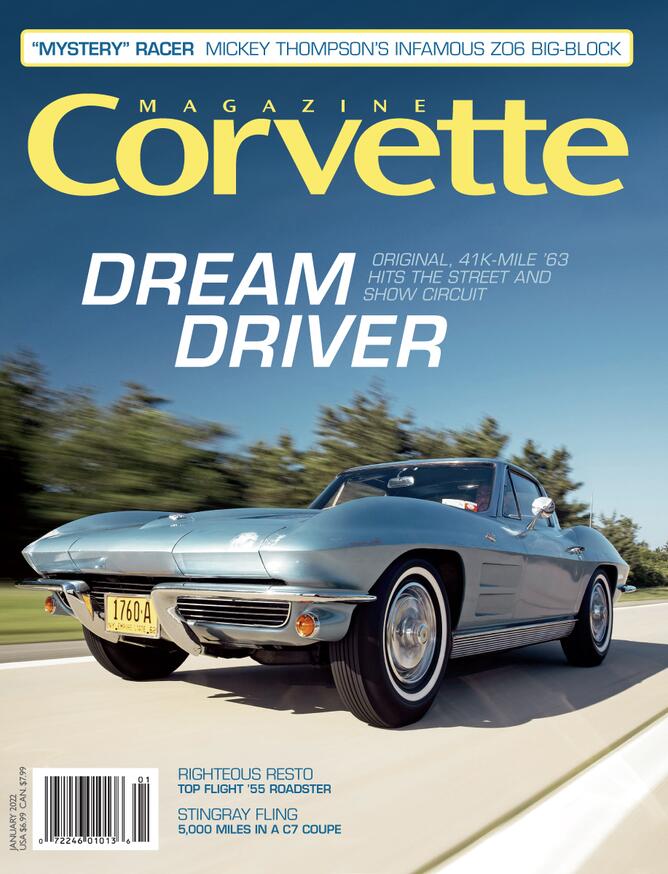