The Art of Deception

Thanks to its carefully designed and implemented modifications, this 2003 Specter Werkes/Sports GTR is both wider than it looks and faster than it feels. 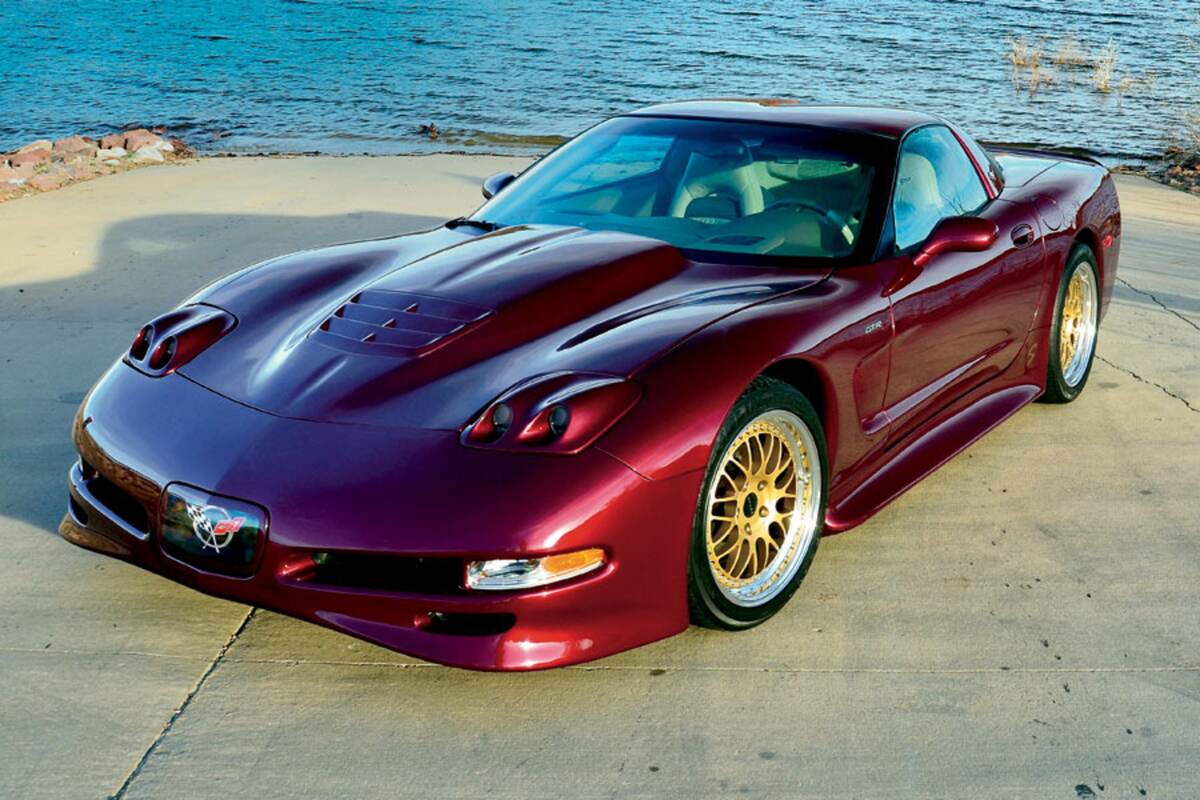 Horsetooth Reservoir in Fort Collins, Colorado is a gorgeous place anytime of day. But right now it’s especially picturesque. The spring sun is dropping low over the western horizon, lighting up the scene with a warm Rocky Mountain glow. The ridges that rise dramatically along the reservoir’s edge are reflected in the tranquil surface of the water. Overhead is a bright blue sky with a smattering of slow-moving clouds. However, this beautiful setting is getting some competition in the eye-candy department from a Corvette.

When I catch a glimpse of it, my first thought is, Why does this Corvette look so good? It takes a bit of head scratching until I have a moment of clarity and realize that this 50th Anniversary coupe is much wider than any stock C5. Frequently, cars that have been treated to such an extreme visual makeover can look cartoonish, becoming a caricature of what the original designers had intended, but not this 2003 Specter Werkes/Sports GTR, one of 29 built. The car pulls off the neat trick of looking like something GM’s designers could have envisioned. As it turns out, the man who penned the GTR, Specter Werkes founder Jeff Nowicki, previously worked as a designer and sculptor at GM.

It’s easy to see why Heather and Dave Ambler couldn’t resist buying this Corvette for themselves. More specifically, we can see why Dave bought the car as a 40th birthday present to his wife, to be parked next to his own Corvette, a 40th Anniversary ZR-1. “We’d always wanted a special-edition 50th Anniversary car since getting the 40th Anniversary ZR-1,” explains Dave. The best complement to the ZR-1 would have been a 50th Anniversary edition of the C5 Z06, but Chevrolet never offered such a model. And for the Amblers, a standard 50th Anniversary coupe or convertible just didn’t do the trick. 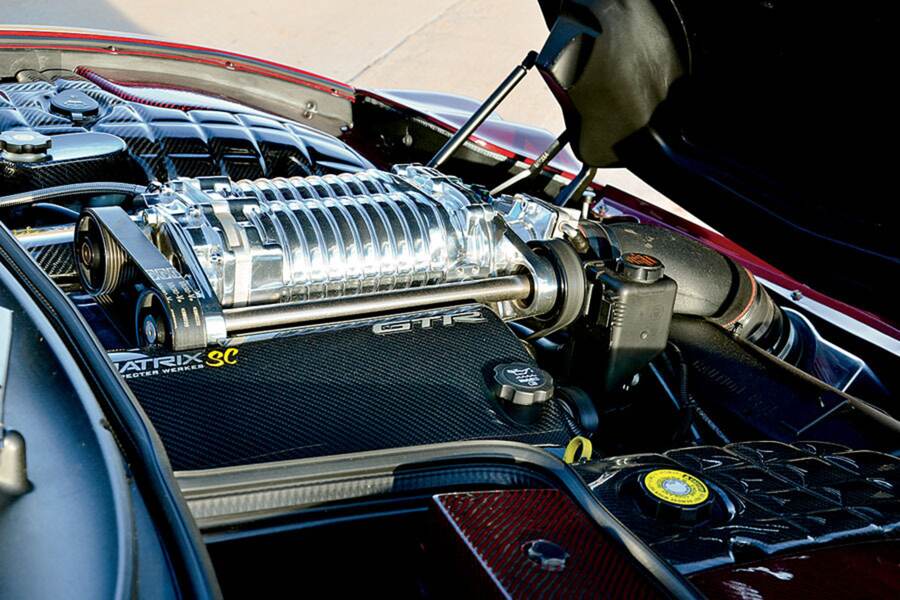 Then they saw this GTR. That fateful day came in September 2010, when the Amblers were picking up their freshly serviced ZR-1 from Purifoy Chevrolet in Denver. “It was ready on a Saturday when the shop was closed,” recalls Dave. “They arranged for the Corvette sales manager to take us into the shop and pick it up.” While they were chatting with the sales manager, the subject of the Specter Werkes/Sports GTR came up, as Purifoy was one of only two dealers that were authorized to sell the car to the public. The entire GTR project was a collaboration between Specter, Purifoy and Cauley Chevrolet in West Bloomfield, Michigan, with the dealers helping to fund the model’s development. It just so happened that a couple of GTRs were on site, and while Heather didn’t like the first car’s searingly bright yellow paint, she was drawn to the other GTR, a recent trade-in, parked in the corner of the warehouse. Though it was covered with a heavy layer of dust, Heather was immediately smitten with the car’s color. When they found out it was the only 50th Anniversary GTR, the Amblers decided to buy to buy it on the spot, trading in their ’96 Collector Edition.

Creating a Specter Werkes/Sports GTR was no simple process. Nearly every body panel was replaced, except for the roof and the rear decklid. Up front, new fenders widened the car by three inches and a more aggressive-looking bumper was fitted. The C5’s standard pop-up headlights were also swapped for a fixed assembly. Nowicki continued the Corvette’s visual transformation by designing new door panels and extremely deep but nicely proportioned side skirts. At the rear, the C5 was widened by a massive six inches—though, as we said at the outset, the added width isn’t immediately obvious. Dave says it’s not until you actually park a GTR next to a standard C5 that the difference becomes starkly apparent.

The standard $33,900 GTR package included only minor interior modifications. The seats were embroidered with the letters “GTR” and a numbered plaque was affixed to the dash. This particular example, however, features a few additional upgrades, including two-tone leather upholstery, a custom VetteEssentials shift knob and a number of Champagne Metallic-painted trim pieces. 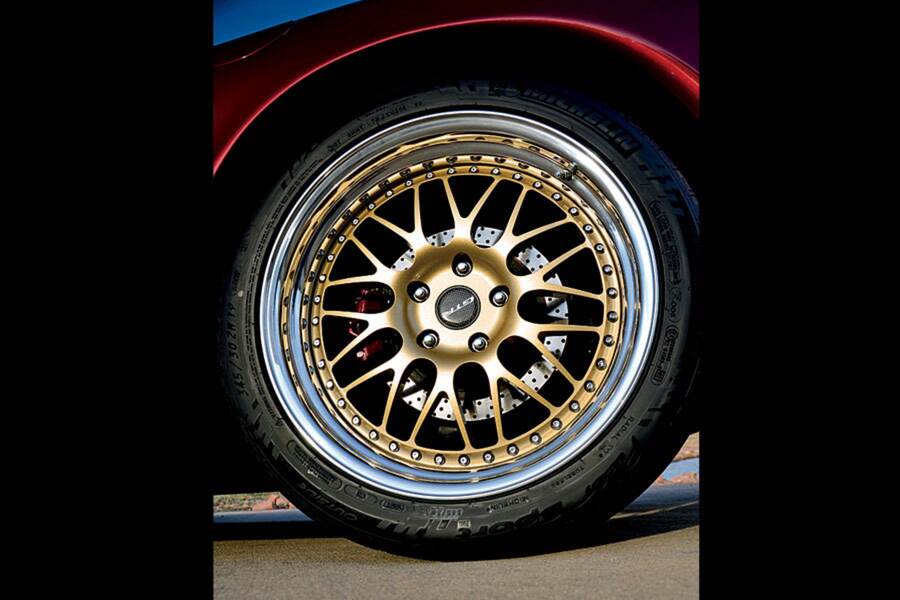 Included in the GTR package were a number of chassis upgrades. To reduce body roll, larger-diameter Hotchkiss anti-roll bars were fitted front and rear. To increase grip and fill out those massive fender wells, GTRs were shod with ultra-wide wheels and tires: 285/35ZR18 front tires mounted on 10.5 × 18-inch alloys up front, with 345/30ZR19s on 12 × 19-inch rims in the rears. The wheels on the Amblers’ Corvette are HRE alloys, but some GTRs were fitted with Forgeline rims. Like all 50th Anniversary models, this Corvette features Magnetic Selective Ride Control shock absorbers. Purifoy opted to have its brakes upgraded. Specter installed Baer’s Eradispeed Plus system ($1,095), featuring 14-inch rotors and painted-to-match Anniversary Red ($375) calipers.

A GTRs could be configured with engines in a number of different guises. In some cases, the C5’s 350-horsepower LS1 V8 was left alone, though the standard GTR conversion kit included some carbon-fiber engine-bay bling (air-filter lid, fuel-rail covers and fuse-box lid) and a stainless-steel Corsa exhaust system. Additional output came in the form of five engine upgrade packages, as well as the option for custom mods. The top normally aspirated V8, the PowerWerkes Matrix Three, was ostensibly a 7.0-liter race engine; it cranked out over 600 horsepower and cost a whopping $23,895. The 750-bhp PowerWerkes Matrix Three Vortex Supercharger kit cost even more, nearly $30K.

At $9,645 installed, the PowerWerkes Supercharger option offered the most bang for the buck. It included a Magnusson Supercharger, which boosted output by 100 ponies, and required an aggressive-looking Power Dome hood ($1,295) to make room for the top-mounted blower. This is the option that Purifoy selected for its 50th Anniversary coupe, but it had Specter perform a few internal engine mods, as well, including the installation of a Z06-spec LS6 camshaft, ported and polished LS6 cylinder heads and larger (2.02-inch) intake valves. This off-the-menu request cost $4,200. Combined with Specter’s GTR PowerWerkes Headers ($895), these mods swelled the small-block V8’s output to 555 horsepower. 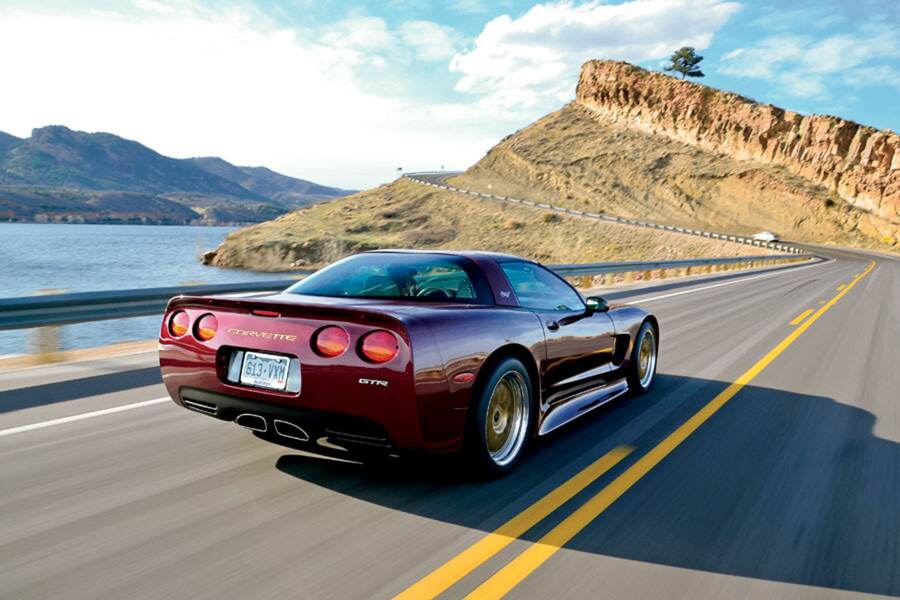 All of this work was done at the Specter Werkes/Sports shop in Troy, Michigan. In most cases, untitled Corvettes were sent there directly from the Bowling Green Assembly Plant—GM had given the GTR project its blessing. They were built according to the specifications requested by either Purifoy or Cauley, which then displayed them for sale on their showroom floors.

With the sun dipping low over the horizon and my photos in the bag, I slide into the GTR’s low-slung cockpit to get a feel for it on the road. The blown LS1 comes to life with a subdued rumble. Rev it, and the Corsa exhaust system emits great music—not obnoxiously loud yet extremely powerful. Most of the controls, from the clutch to the steering, are as light and pleasant to use as those in a factory stocker. However, the B&M short-shift kit reduces fore-and aft as well as side-to-side motion considerably over a standard shifter—so much so that it takes a minute to get used to. To be honest, I accidentally drove off in third gear, though I hardly noticed thanks to the engine’s deep well of low-rpm torque.

Dipping into the throttle changes the GTR’s pussy cat-like demeanor at lower speeds into that of a roaring tiger. The resulting acceleration is impressive, but the car doesn’t feel gut-wrenchingly fast. That’s because the torque curve is as flat as can be and there are no spikes in the powerband. The engine revs smoothly and eagerly right up to redline without complaint or a drop-off in power. With the supercharger adding a subtle whistle to the exhaust note, the GTR simply hammers down the road with authority. 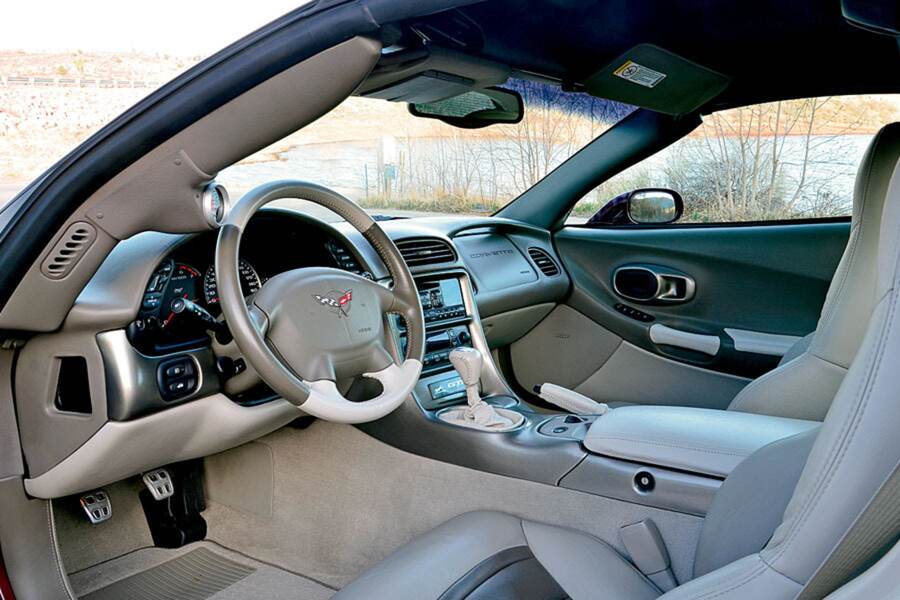 The car’s handling is commendably neutral. The chassis responds quickly and accurately to steering inputs. There is a hint of body roll on initial turn-in, but the GTR corners confidently, with the front tires gripping obediently and the back following right around. Despite the extra stick afforded by the wide rubber, the stiffer sway bars do make the car feel a bit more tossable than a standard C5, and the Baer brakes slow the car from the triple-digit speeds with ease.

Dave loves the GTR’s performance, but its not his favorite aspect of the car. When pressed about what he likes most, his answer comes without hesitation: “The appearance. Both the interior and exterior are really well done. The Anniversary Red has a great ‘pop’ to it that is nicely complemented by the bodywork. The interior takes the 50th style cues and improves on them to make a beautiful combination of colors.” The Amblers wanted a special 50th Anniversary Corvette and they got it. 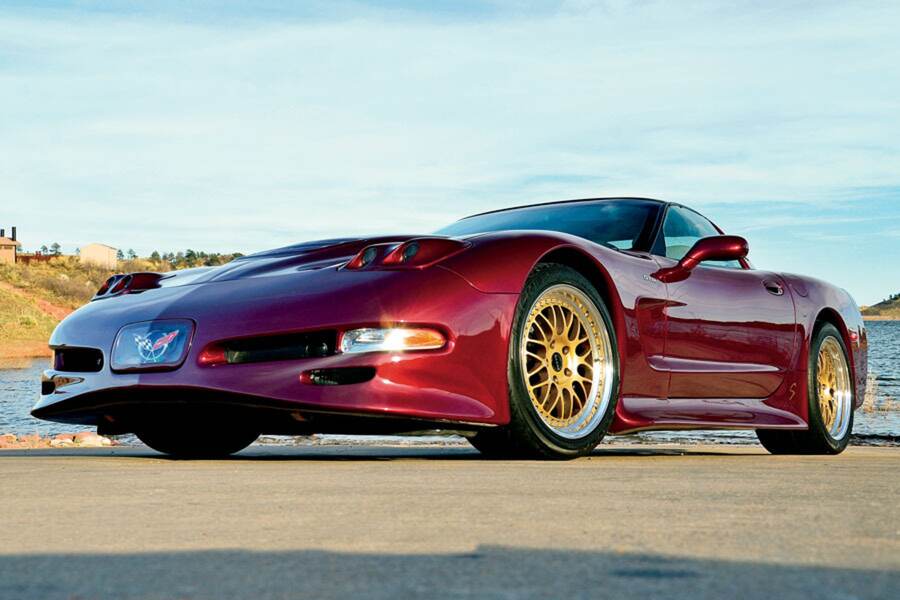 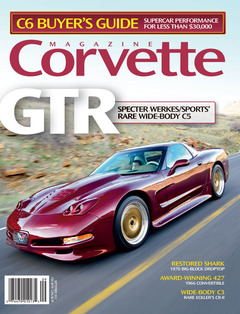