Despite being originally owned by a young drag-racing enthusiast, this 1969 L89 coupe remains in remarkably pristine and original condition. 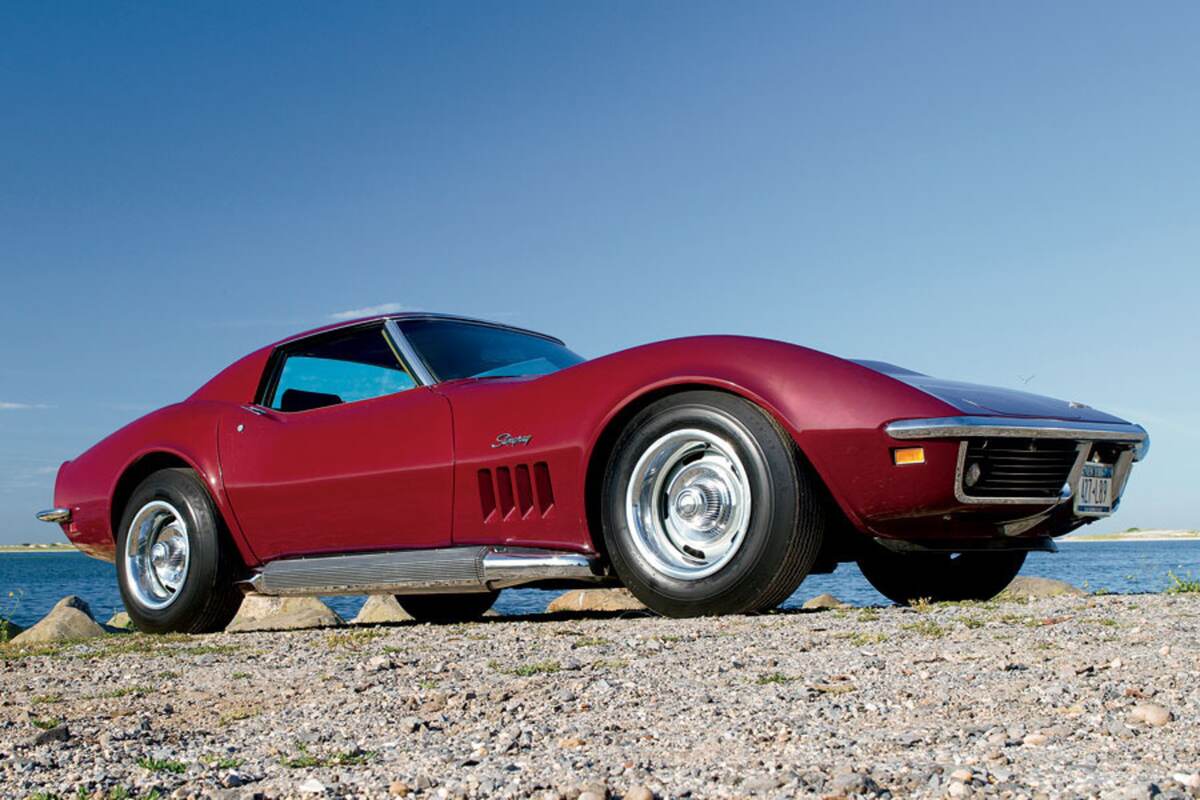 A YOUNG LAD FRESH OUT OF HIGH SCHOOL named Hugh Miller buys a brand-new 1966 427/425-horse Corvette. Two months later, the car is crashed through the giant plate-glass windows of a building under construction and ends up stuffed into a stack of sheet rock. Undaunted, this same young man then buys a brand-new 1967 427/435-horse Corvette, but one week after taking delivery he’s informed by his insurance company that he is persona non grata. A thorough attempt to procure new coverage elsewhere reveals that, at his tender age and with the very recent totaling of a new Corvette on his record, nobody will sell him insurance. In fact, he will not be able to insure a Corvette until he turns 21. With no other options, he reluctantly sells the car. Fast forward two-and-a-half years to January 1969, and young Mr. Miller celebrates his 21st birthday with the purchase of yet another new Corvette, a Burgundy coupe fitted with all of the go-fast goodies, including a potent aluminum-head L89 427/435-horse engine.

Under the circumstances, the likelihood that this car would live to a ripe old age was pretty slim. Yet in defiance of all odds, it not only survived but remains to this day an impressively original and unrestored specimen, with multiple National Corvette Restorers Society (NCRS) Top Flight awards, Bloomington Gold certification and a Bloomington Survivor award to its credit.

In defense of the car’s original owner, he wasn’t at the wheel of the ’66 when it went off-road and rearranged the façade of that building. His girlfriend did the honors, losing control of the ferocious big block on a curve. But that’s not to say he wasn’t capable of getting into trouble on his own. “I remember doing plenty of things I shouldn’t have back then,” Miller says with a chuckle. “But somehow I did manage to stay out of trouble with the ’69. I don’t even remember getting a single ticket in the car.” 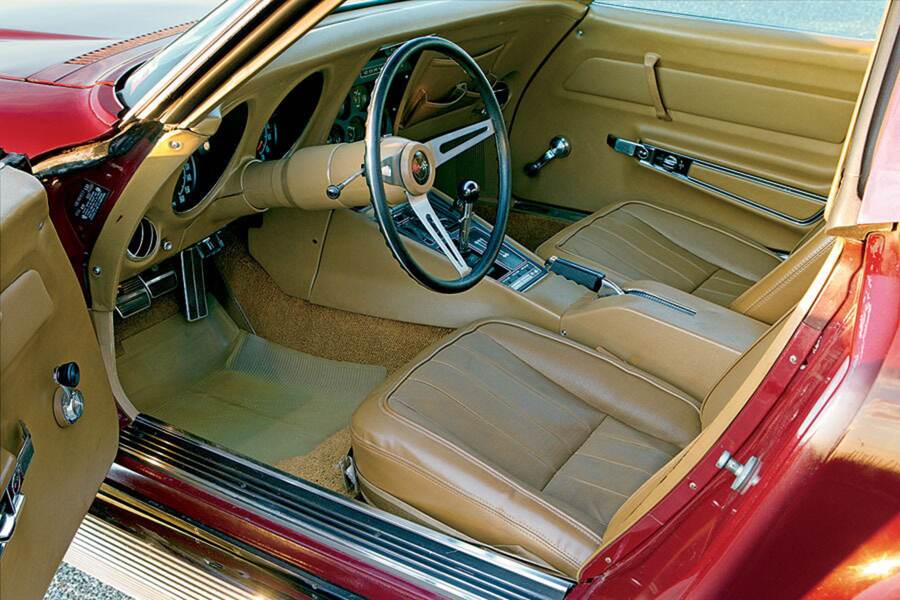 One of the main things Miller did that he shouldn’t have was a fair amount of street racing in and around his hometown of Memphis, Tennessee. “One night, I drag raced a 1970 454 LS6 Chevelle up and down White Station Road for close to an hour,” he recalls. “On another occasion, in 1972, I had at it with a 1969 Corvette, a black roadster with a 427/400 engine. A friend of mine owned the car. He was frequently ragging on me to race him, and one time I gave in. That was a mistake!”

Why was it a mistake? “On the bottom of the tach face it says ‘RPM,’ and I looked down at the tach and the needle was over the ‘M’ in ‘RPM,’” he says. “That needle was buried, past 7,000 rpm, and a few moments later the engine sucked a valve.”

Thankfully, the damage to the engine was minimal. But rather than simply repair it, Miller had the engine converted to full L88 spec, with that option package’s high-lift/long-duration cam, 12.5:1 compression-ratio pistons and single four-barrel carburetor instead of the L89’s three carbs. While he was at it, he ditched the factory’s smog-reducing air-injection system. In addition, he bought a set of over-the-counter racing headers from Chevy and had them installed. 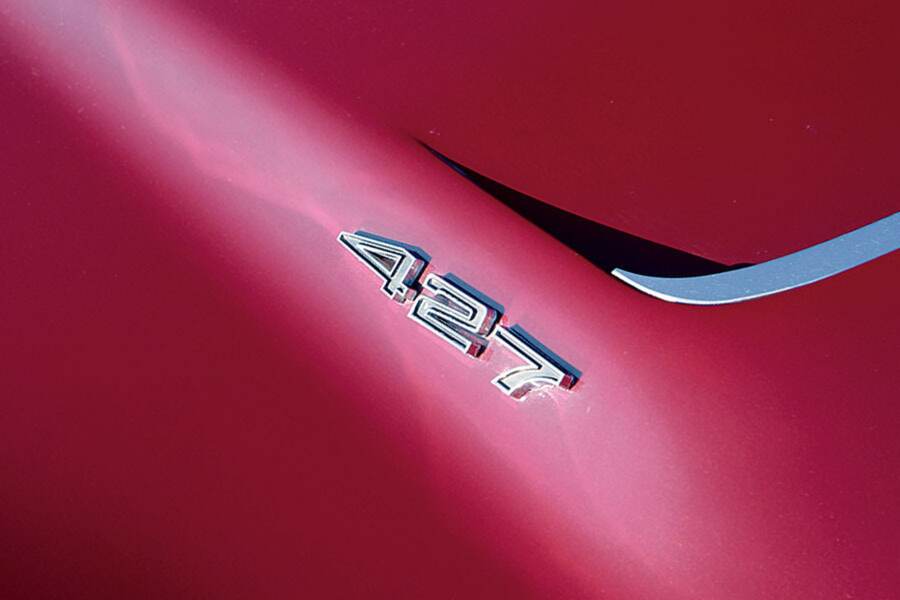 Miller had actually ordered an L88 to begin with. A friend of his, whose father owned a Chevrolet dealership in Nashville, had an early 1969 L88 and Miller had every intention of owning one of these beasts. For reasons that remain a mystery, however, Miller’s L88 never materialized. Widespread strikes in the spring of 1969 that shuttered numerous GM assembly facilities, including one at the St. Louis Corvette plant, may have played a role. Several months after his order was placed, the dealer told Miller that Chevy was not building any more L88s, and the only alternative that would get him close was an L89, so that’s what he settled for.

“I was somewhat disappointed,” Miller recalls, “because I had waited almost three years to buy another Corvette and I really wanted that L88. But the dealer told me I couldn’t get one, and presented the L89 as a take-it-or-leave-it proposition. So I got the L89 in a car set up like an L88, without a radio and with the F41 suspension and all of that. And with an 11.0:1 compression ratio in the L89 I could drive it on pump gas, which of course made it easier than the L88 would have been.”

Despite that earlier experience with the over-rev, Miller wasn’t averse to flexing his newly rebuilt engine’s muscles. “I thought about seriously drag racing the car,” he recalls, “but couldn’t bring myself to butcher it. There was a lot that I would have had to do to the car to make it really competitive, and I didn’t want to do that to the car.” 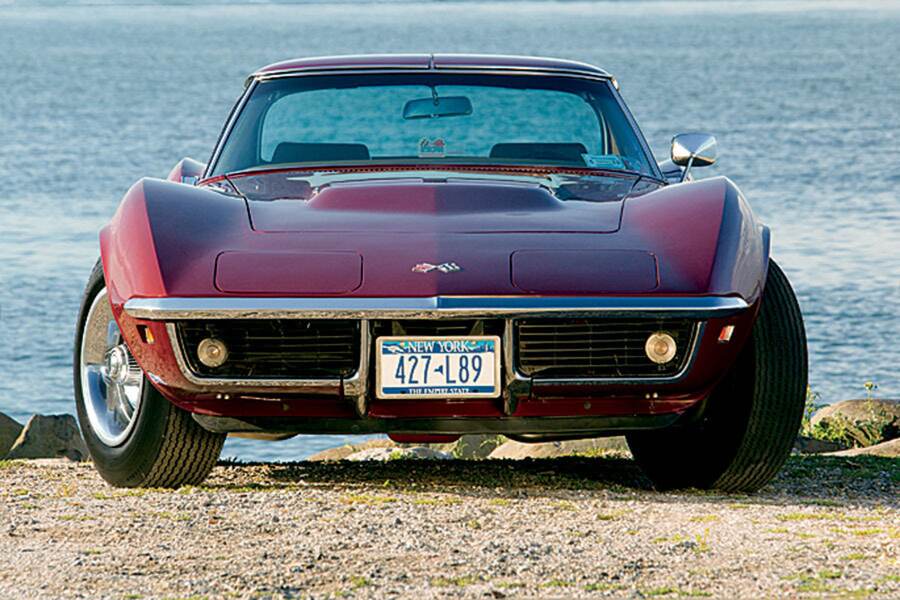 Miller managed to satisfy his drag-racing urge by helping out a friend with his highly modified, 9-second ’69 Camaro, thus enabling him to keep his Corvette in as-new condition. Also, he had another car—a 409-powered 1964 Impala SS—that served as his daily driver, so the Corvette never saw foul weather and racked up relatively few miles. In fact, when Miller sold the car in 1978, it had a modest 18,000 miles on the clock, still looked pristine and, aside from the engine modifications, was completely original.

THE 1970S WITNESSED THE BIRTH of the hardcore Corvette collecting hobby as we know it today. By the end of the decade, enthusiasts were already looking back at the heyday of American muscle cars with reverence. Though the 1969 L89 was less than ten years old when the second owner took possession, it was already quite collectable, and he was focused on maintaining its originality.

The L88 engine modifications that Miller did after the engine was damaged street racing were undone by bolting the original tri-power intake setup back on and replacing the cam and pistons with correct L89-spec parts. The air-injection pump and factory exhaust manifolds also went back onto the engine, completing its return to 100-percent stock. 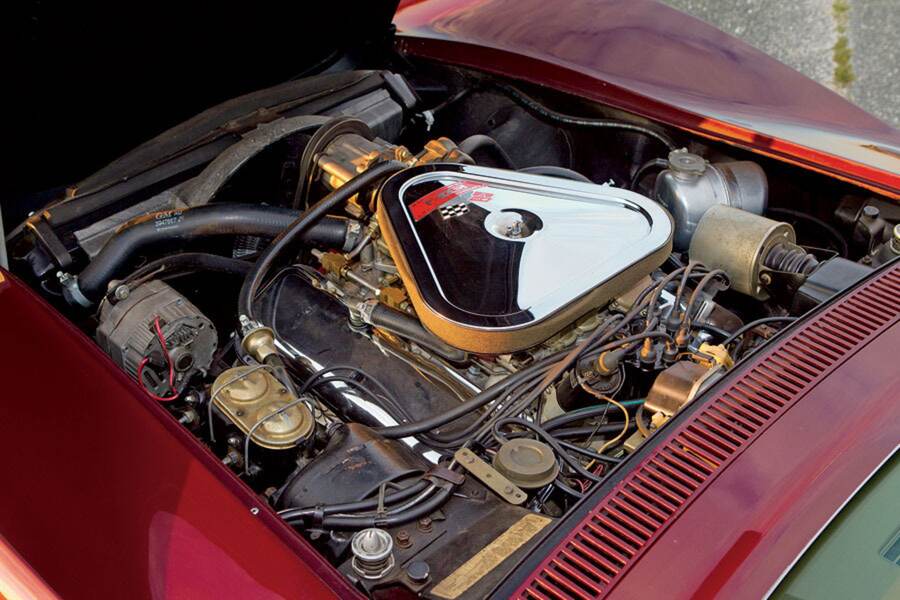 The car eventually found its way to New Jersey Corvette enthusiast Ed Mueller, then moved into the Ronnie and Alvin Steinman collection, where it shared garage space with quite a few of the rarest and most valuable Corvettes around. When the Steinman brothers decided to part with the car in 2001, New York Corvette lover Tom Commons was quick to react. By that time, the coupe had accumulated a little more than 24,000 miles and Commons was awed by both the L89’s originality and excellent condition, especially considering the fact that it had never been repainted. He was also very impressed with its documentation, which included the original window sticker, tank sticker, dealer invoice and Protect-O-Plate. But it was an old magazine article that really sealed the deal.

“As I flipped through the binder that contained the original paperwork,” Commons recalls, “I noticed a copy of Muscle Cars magazine from 1987 and I immediately recognized this because I had bought it at a newsstand back in ’87. It was actually a special edition of the magazine that featured many vintage high-performance Corvettes, as well as other assorted muscle cars. I remembered reading the magazine cover to cover when it was new and being mesmerized by the fastest and rarest of vintage Corvettes. It made enough of an impact on me that I remembered it almost 15 years after it was printed, and the L89 I was looking at was one of the cars featured in this magazine! Ronnie and I shook hands and the car was sold.”

After buying the remarkably well-preserved car—the tires are reproductions of the original Goodyear bias-ply blackwalls and sundry hoses and clamps have been replaced, but nearly everything else is original—Commons was interested in learning more about its history. A lot of vintage Corvette collectors are desperate to find previous owners of their cars, but tracking them down often proves elusive, especially when those owners have very common names like Miller. Not so for this car. It turns out Hugh Miller was still living at the same address as listed on the original Protect-O-Plate and his number was listed, so Commons simply rang him up. “When I called to speak with him,” says Commons, “he was very happy to hear about his old ’69 Corvette, and I was very happy to learn more about the car.” 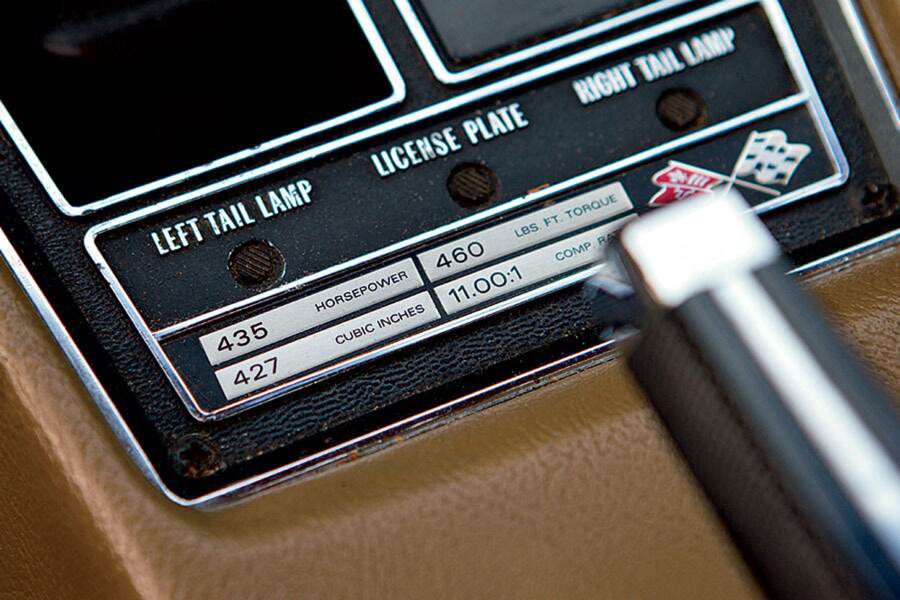 In the years Commons has owned the car, he’s presented it for judging and display at many NCRS events as well as at Bloomington Gold. Like the Corvette’s previous owners, he treats it with a lot of TLC and drives it sparingly. “I pay very careful attention to the car’s originality in respect to its maintenance,” he tells us. “It remains in its ‘as purchased’ state, a uniquely preserved representative of Corvettes from the muscle-car era.” 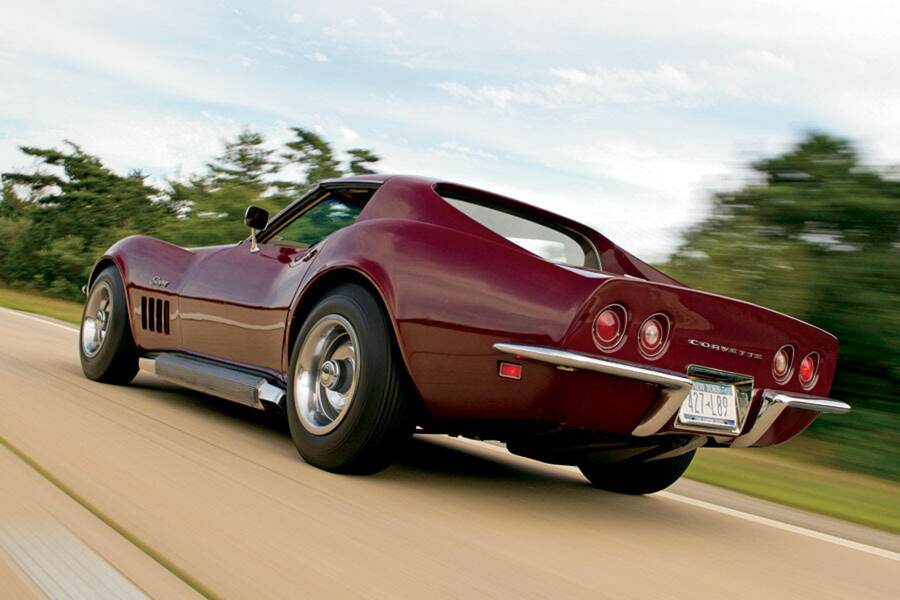 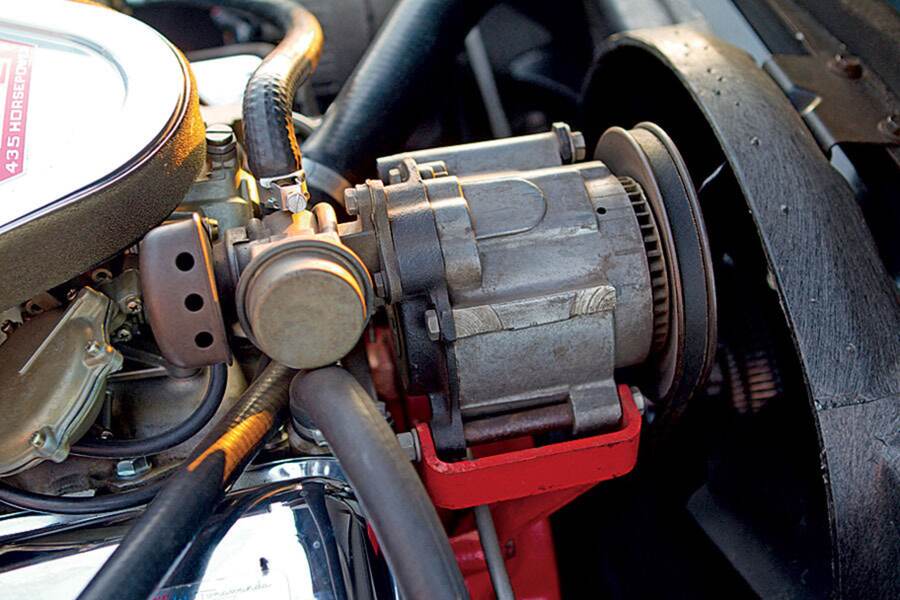 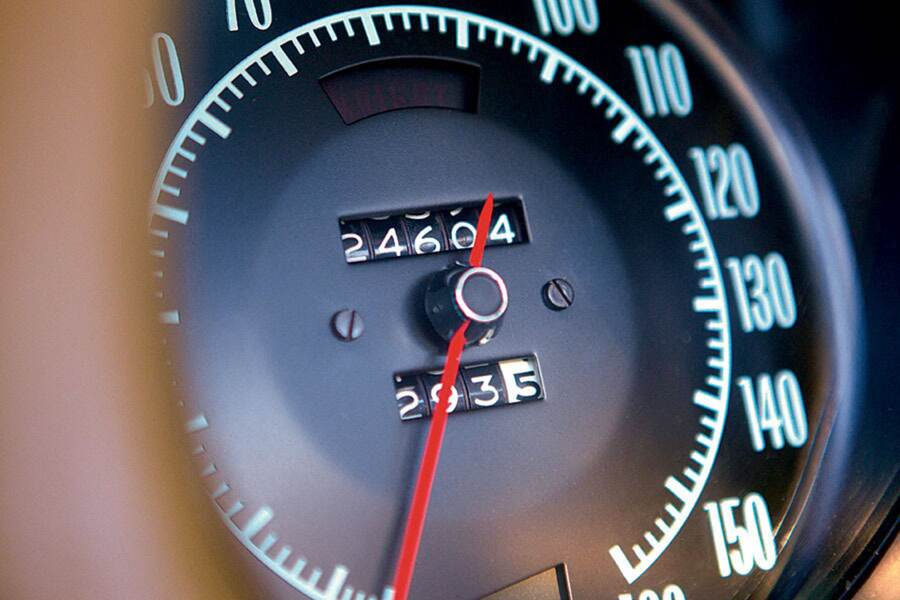 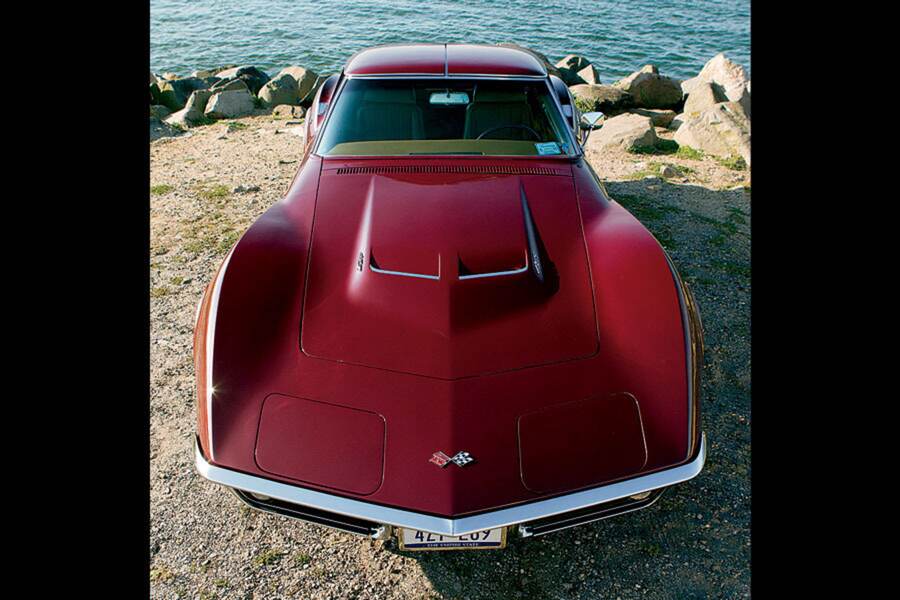 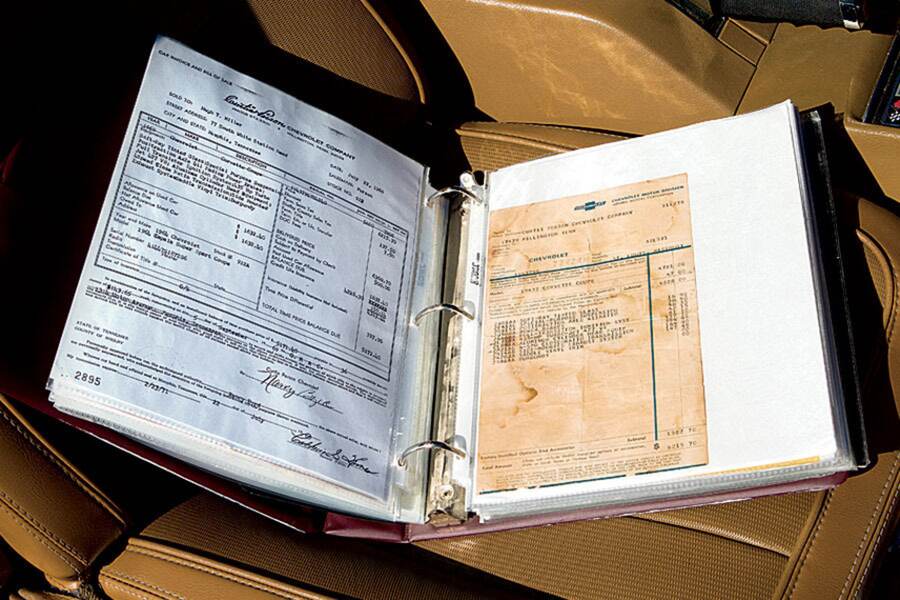 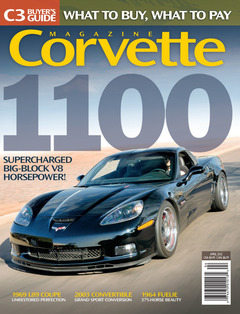