A Katech employee leverages his company’s talents to build a 650-horsepower Z06—without using a blower. 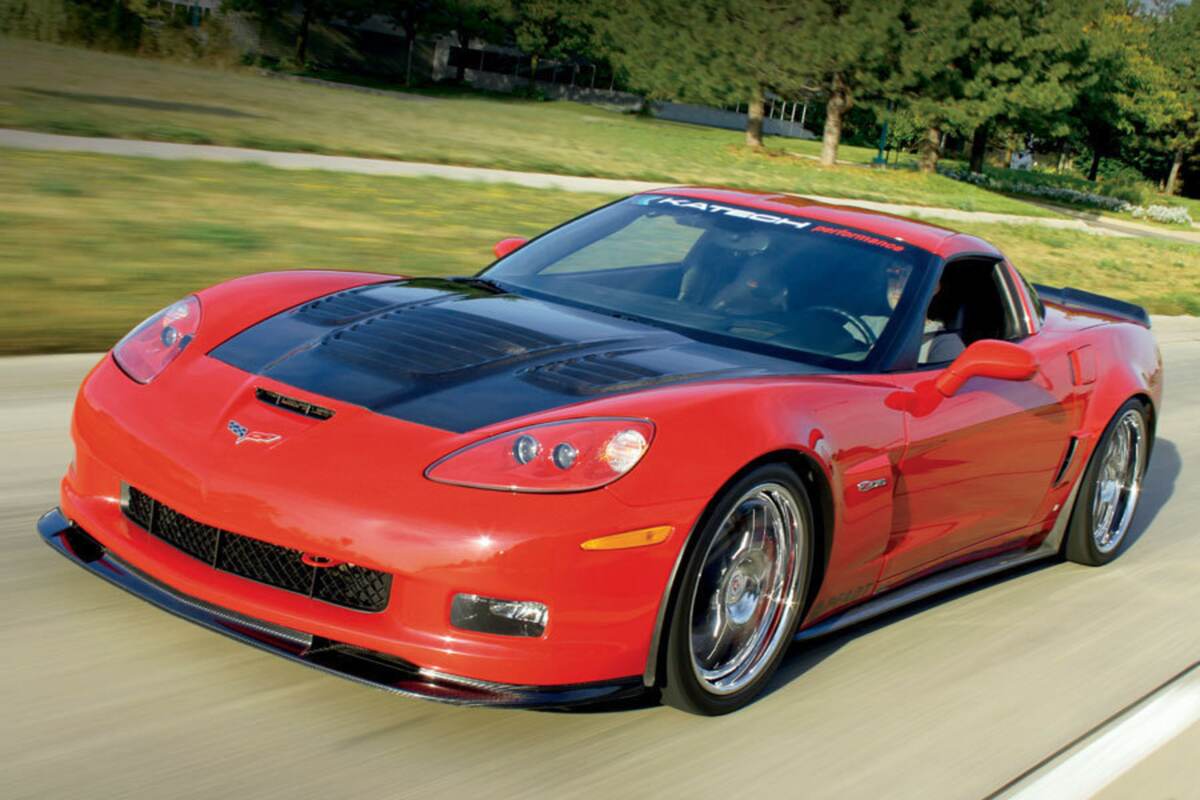 Working for Katech Performance and owning a C6 Z06 is pretty much like working at the Cool Whip factory and having a stack of pumpkin pies in your office. Such is the luck of the Michigan company’s main marketing man, Jason Harding. In 2007, he bought a Victory Red 2006 Z06, and over the years it has been treated to generous helpings of go-fast parts from the Katech catalog. The engine, the suspension, the appearance—just about every element of the Corvette has been upgraded, yet the car remains an all-around performer, as at home on the street as it is on the drag strip, where it is able to click off 11.3-second ETs.

Sure, Harding gets the employee discount on parts, but more importantly, he’s privy to Katech’s considerable motorsports experience—the company used to supply engines to Corvette Racing—so it’s kind of like working at Apple and being able to ask Steve Jobs if he knows of any good iPad apps. “No doubt about it, working [at Katech] has its advantages,” says Harding, grinning. “There are some very knowledgeable people here and I’m lucky to leverage it from time to time.” For example, he regularly eats lunch with Ron Helzer, the Katech engine technician who traveled with the Corvette Racing team, tending to its 600-horsepower LS7.R V8s.

However, Harding is quick to point out that his car is not the company’s official project vehicle. It’s his, and he’s invested plenty of his own time and money in it. At the same time, he’s used it to try out new Katech parts—to validate their fit, finish and performance, as well as to show them off to the public and gauge the response. This has been the case since the beginning: Three weeks after buying the Z06, Harding had it in the Katech shop for its first round of engine modifications. “We needed a car to display our products, and I was happy to provide it,” he says.

Helzer and his crew performed a variety of modifications to the Z06’s 7.0-liter LS7 V8, basically installing Katech’s Street Attack package. A set of Katech forged-aluminum pistons raised the compression ratio from 11.0:1 to 11.4:1. The stock forged-steel crankshaft and titanium connecting rods were retained, but they were re-bushed with Katech’s solid bronze bushings. Katech rod bolts were used, as well as the company’s Diamond Like Carbon-coated pins. 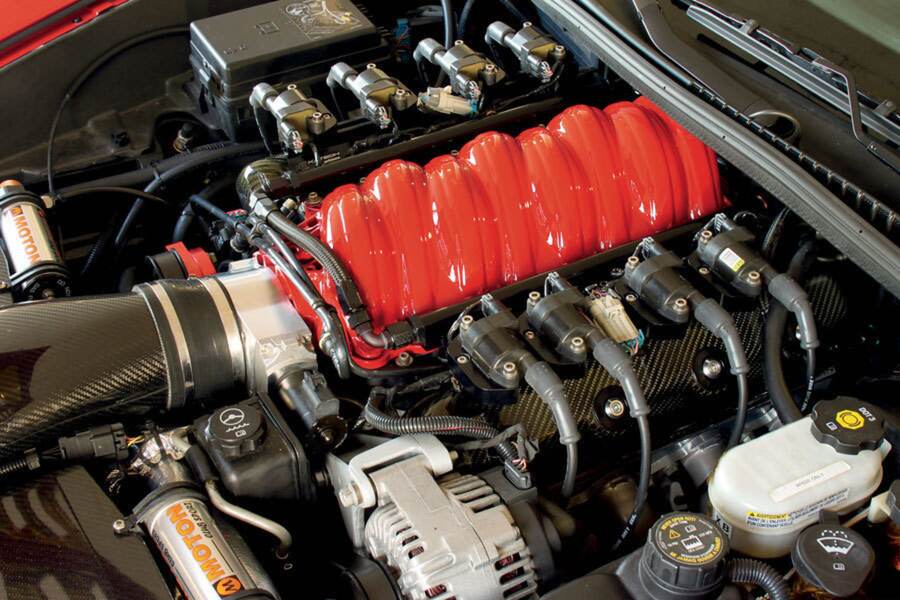 To take advantage of the stock LS7 head’s tremendous airflow, a Katech Torquer camshaft was installed. Its specs include 0.615/0.648-inch lift, 220/244-degree duration at 0.50-inch lift and a 110-degree lobe separation angle. “Sure, there are more powerful cams out there,” says Harding, “but I didn’t want to trade off the drivability.”

To improve breathing, the engine was fitted with a Halltech Super Bee CF112 carbon-fiber air intake (with a Halltech SuperBeehive shroud), along with a Halltech carbon-fiber NACA duct bezel and ported NACA duct. In terms of exhaust, a pair of Kooks 1 7/8-inch ceramic-coated headers was bolted on, as were a Kooks X-pipe and Corsa mufflers. A Koolmat tunnel shield was fitted to help keep drivetrain heat from radiating up through the floor. There’s also heat shielding on the underside of the hood.

The engine was then dressed for success. The intake manifold was painted Victory red to match the car’s exterior, while the Katech carbon-fiber valve covers (installed with the company’s coil-relocation kit) were left unpainted to match the Halltech intake components. The billet aluminum fuel rails were stripped, polished and re-anodized black.

Katech’s $9,400 Street Attack package is rated at 600 horsepower. Since Harding’s car was treated to that and then some, his engine was likely putting out more than that. Still, he began thinking about ways to extract even higher output from the engine while keeping it streetable. A few years down the line, he came up with a solution: He decided to convert the V8 to run on E85 ethanol. Because this fuel’s 105-octane rating is considerably higher than that of the 93-octane gasoline the LS7 was originally tuned to sip, the engine’s compression ratio could be raised to 12.0:1 without sacrificing ignition timing, thus providing a noticeable bump in horsepower production. 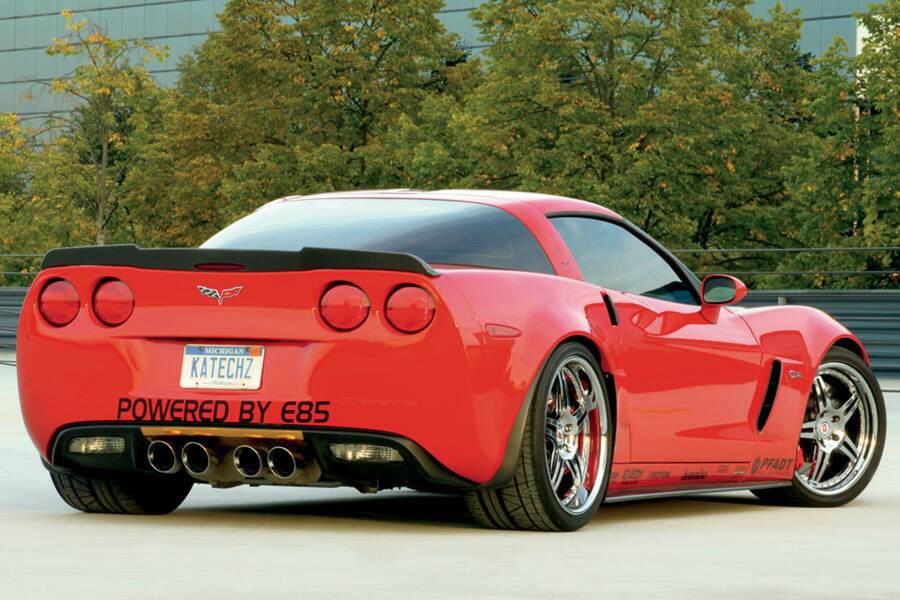 Achieving this greater squeeze didn’t require yet another new set of pistons, however. Instead, Harding had the stock cylinder heads decked by West Coast Cylinder Heads; it was merely a matter of shaving a little off the bottom. The heads are filled with stock LS7 titanium intake valves and sodium-filled exhaust valves.

With the latest round of mods completed—including upgrading the Z06’s original dry sump-style oiling system to the new, larger capacity (10.5-quart) system—Harding had the E85-burning Z06 strapped onto Katech’s chassis dyno. It registered 568 rear-wheel horsepower and 529 lbs-ft of torque, or about 650 horsepower and 585 lbs-ft of torque at the flywheel. That 145-horsepower leap over the stock 505 rating is on the high side of what a bolt-on blower would deliver. What makes the achievement even more eyebrow-raising is the fact that it was achieved with no increase in displacement—the easiest path to adding naturally aspirated horses.

Harding can switch back to 93-octane gasoline with a quick engine computer calibration change made via laptop. GM’s factory FlexFuel vehicles have the ability to run any blend of E85 and gasoline, but the Z06’s controller does not have the hardware to calculate that, so the tank must be run down to empty before switching fuels. 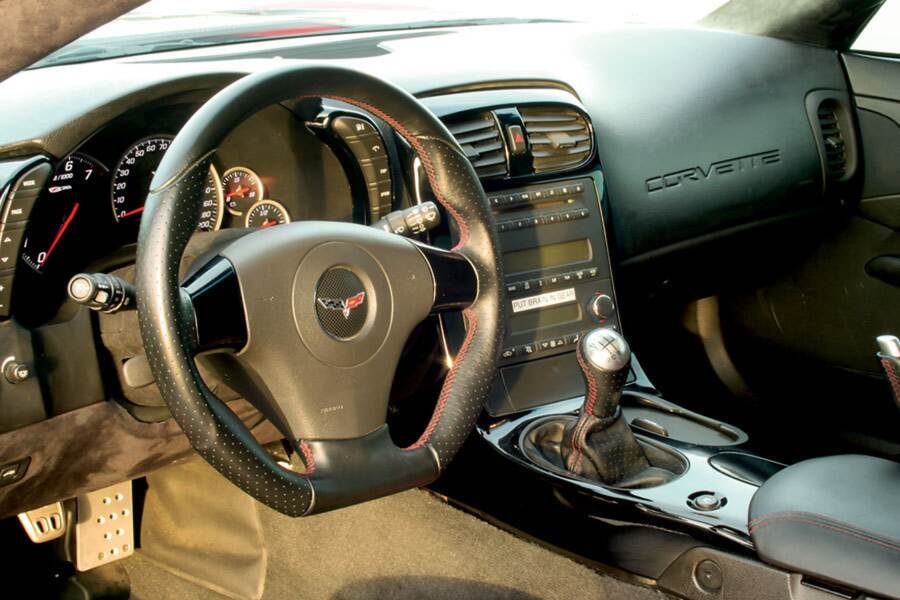 Supporting the 650-horsepower engine is the stock 6-speed manual transmission, but the clutch is an Exedy twin-disc setup and the transaxle was upgraded with the stronger axle shafts that debuted on the ’08 Z06. There’s also a Dewitts high-capacity, racing-style radiator under the hood.

When it comes to reining in all that horsepower, Harding’s car relies on a set of enormous Brembo Gran Turismo brakes, featuring two-piece slotted 15-inch rotors and six-piston calipers in the front; 13.6-inch rotors are clamped by four-piston calipers in the rear. He uses Ferodo FM1000 brake pads on the street and Ferodo DS3000 pucks on the track. In either setting, the brakes deliver exceptional stopping power.

Despite their increased size, the Brembo brakes are lighter than stock Z06 brakes. This was no accident: Harding was looking to shed as much mass as possible. For example, he exchanged the stock battery for a lightweight racing version, a 15-pound Braille unit. Although the battery starts the car on the street just fine, leaving the lights or radio on for more than a few minutes sets off a search for jumper cables.

Harding also fitted numerous carbon-fiber parts and even went so far as to remove the air-conditioning system. He claims his diet program has trimmed the car’s curb weight to below 3,000 pounds, down from 3,132. 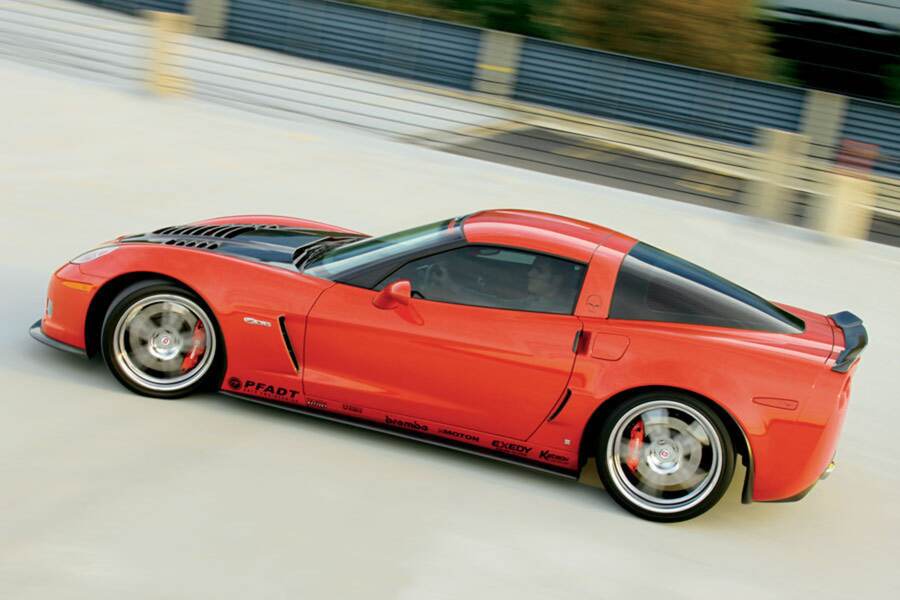 Torque meets the tarmac via HRE 597R wheels (19 × 9.5-inch front, 20 × 12-inch rear) wrapped in Nitto Invo tires on the street, while 18-inch/19-inch HRE C21 wheels and Hoosier R6 tires replace them on the track. The street tires measure 285/30ZR19 and 345/25ZR20, while the racing rubber sizes are 295/30ZR18 and 325/30ZR19. Again, Harding’s experience at Katech, including presiding over and participating in the company’s annual customer race weekend, gave him invaluable insight into what works best when it comes to the optimal rolling stock.

That insight helped direct enhancements in the suspension department, too, including the addition of Moton Clubsport double-adjustable shocks paired with Eibach springs and a set of Pfadt Competition sway bars.

While the drivetrain and suspension modifications are all-business, the exterior and interior mods have as much to do with aesthetics as they do performance. Not surprisingly, most of the exterior items are Katech parts, including the carbon-fiber front splitter, which features an undertray and integrated brake ducts, the carbon-fiber rocker panels and the carbon-fiber rear spoiler. The other major exterior upgrade is an ACP World Challenge carbon-fiber hood. Unpainted to expose the carbon-fiber weave, the hood is carefully clear-coated to protect it and give a suitably rich appearance.

Inside, the Z06 takes on a more luxurious, exotic-car feel, thanks to the application of suede-like Alcantara material on the A-pillars, visors, headliner and kick panels. That’s complemented with Caravaggio leather trim (black with red stitching) on the shifter boot, shift knob, parking-brake boot, parking-brake handle and center-console lid. The thick, flat-bottom steering wheel is a Caravaggio item, too. 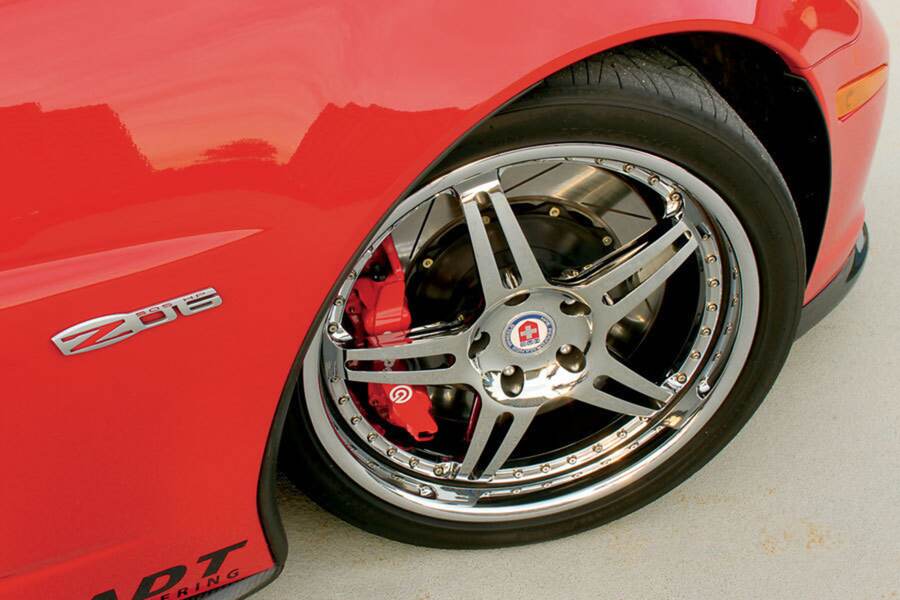 Ahead of the shifter, affixed just below the radio, is a simple label that reads: “Put Brain in Gear.” Inspired by retired SCCA racer and friend Jim Painter, Harding installed it to help ensure he’s focused on what he’s doing, especially before a few hot laps at a track day.

Though our time behind the wheel was extremely limited, it didn’t take long to be impressed with Harding’s creation. The engine barks to life with authority and settles into an appropriately aggressive idle, with the high-compression 427 kicking out an anxious, “let’s go now” tempo. The engine revs quickly, with immediate throttle response. There’s no delay in the power delivery nor is there suddenly a big spike in output, which can happen with forced-induction engines when the boost comes on. This V8 is linear, predictable and very strong.

We were surprised by the civility of Harding’s Z06 on the street. To be sure, the racing-derived suspension components, not to mention tires with minimal sidewall profiles, create a stiff ride. On the worst stretches of disintegrating pavement around metro Detroit, the ride can be a little jarring, but not prohibitively so. Explains Harding, “Drawing on the experience of the Katech staff has made this car comfortable and efficient on the street, where it gets up to 25 mpg on gasoline and around 20 mpg on E85, and very competitive on the track. I couldn’t ask for more.”

We’ve heard such sentiments from owners before, does he really mean it? “People ask me ‘What’s next, a supercharger or turbo?’” says Harding. “I’m very happy with the power-to-weight ratio that the car has now, and I’m a big fan of naturally aspirated power. A 650-horsepower naturally aspirated engine in a sub-3,000-pound car is a wonderful thing.”

Every job has its perks. Some more than others. 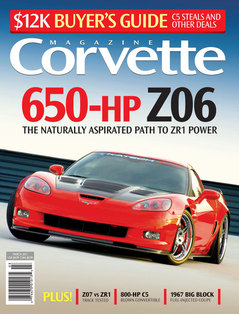