This ’64 coupe has undergone a remarkable transformation—from a plowshare back to a sword. 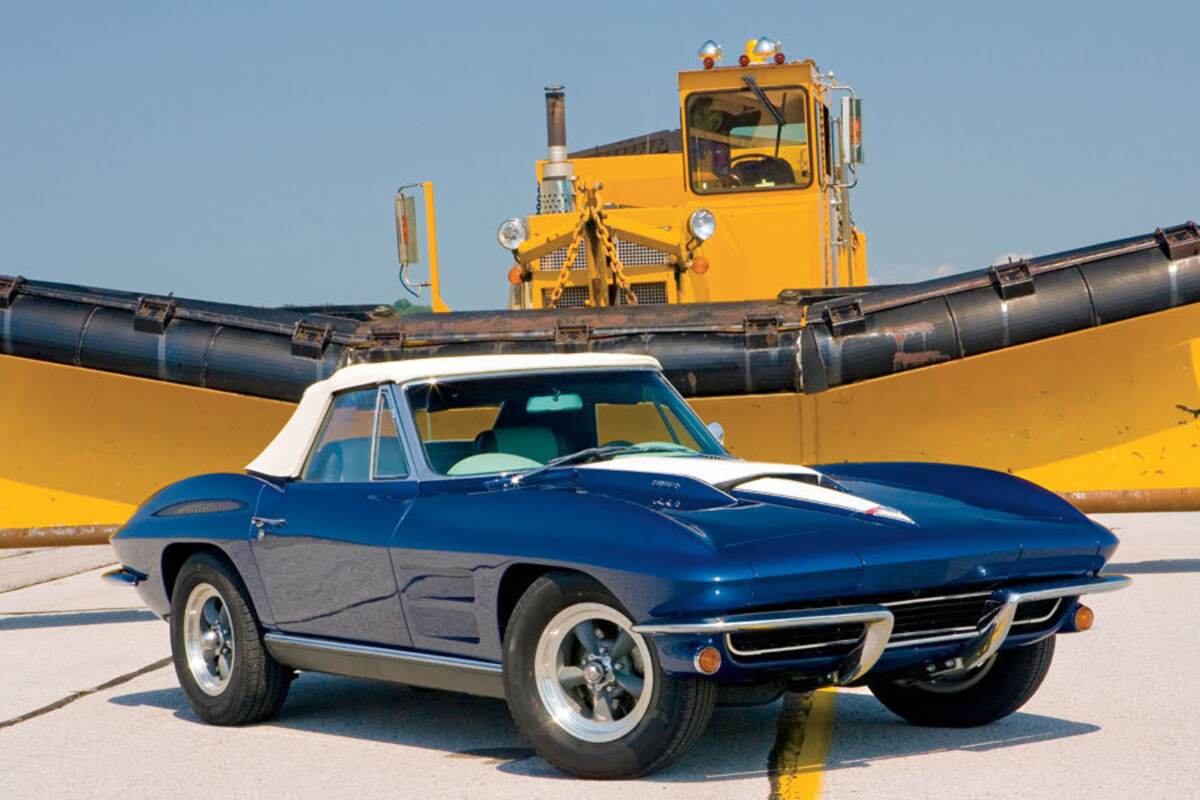 Just when you think you’ve seen every bizarre thing that can be done to a Corvette, something comes along and shatters that notion. For Paul Comeau, it came in the form of ’64 Corvette snow plow. Yes, you read that correctly: a Corvette snow plow. A friend told him about a ridiculous-looking Corvette that was up for auction on eBay. The person that built the car had died and it was being auctioned off as part of an estate sale. When Comeau looked at the Corvette, it was so over-the-top that he just had to have it. “I contacted the seller and gave him a bid for it, which he accepted,” he recalls. “We ended up driving to Pennsylvania to pick up the car. It was as silly-looking in person as in the pictures on eBay.”

So why did Comeau end up buying such a basket case? Did he have a long driveway that needed to be cleared of snow? “The Corvette VIN tag was intact, which made this car a suitable candidate for rebuilding,” he explains. Clearly, for most individuals, what was left of the original car wasn’t worth the time and money needed to bring it back to life. However, Comeau had a clear plan. As the owner of The Corvette Shop in Montgomery, New York, restoring Corvettes is his business, and this project would be an excellent way to showcase his workmanship.

Comeau’s attraction to this car was also in part due to another ’64 that he had worked on. He was paid in full by a British customer to take a numbers-matching convertible and modify it with a stroked crate engine and modern brakes and wheels, as well as repaint it. In a bizarre twist, the owner disappeared and never picked up his completed car. As a result, Comeau has a Corvette that he cannot sell or drive. With his new acquisition, he could do both. 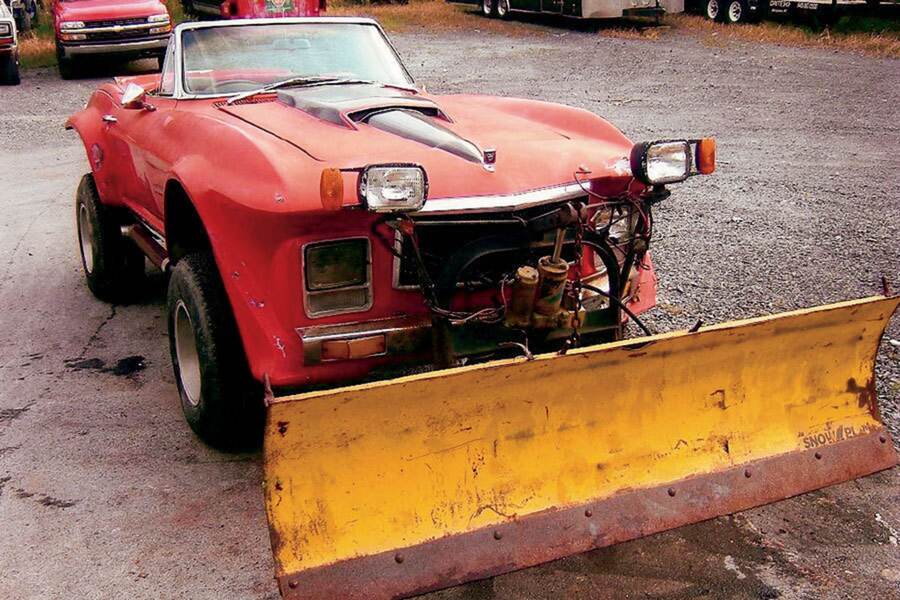 With the snow plow back at his shop, Comeau began to take stock of his purchase. The heavily modified Corvette body had been mounted on a Jeep frame and fitted with a 304-cid AMC V8 engine and automatic transmission. Someone had spent a great deal of time sculpting a deep fiberglass front fascia. Despite the aerodynamic profiling, this was not done to reduce lift but in order to fit tall Chevy van headlights and a big Ford Granada grille. Wide fiberglass fender flares were also added, as were special housings for the Datsun taillights. Comeau quickly realized that all these additions and the panels they were attached to needed to be trashed. The only thing that could be salvaged was the central fiberglass tub and the steel “birdcage” structure that supported it.

This actually opened up an opportunity for Comeau to have a bit of fun. Instead of removing the panels in the traditional way, he decided to take the “Truckster,” as it was now called, out for some fun in the woods. “Some serious four-wheeling action was needed to get rid of unnecessary parts on the car,” he recalls. “I found another clunker that ran and proceeded to run a collision course between the two vehicles.” (Search YouTube for “Let’s wreck a ’64 Corvette” to view this unorthodox practice.) To Comeau’s surprise, he had a hard time knocking off the panels. He ended up using a small tractor to pull them off with a chain. 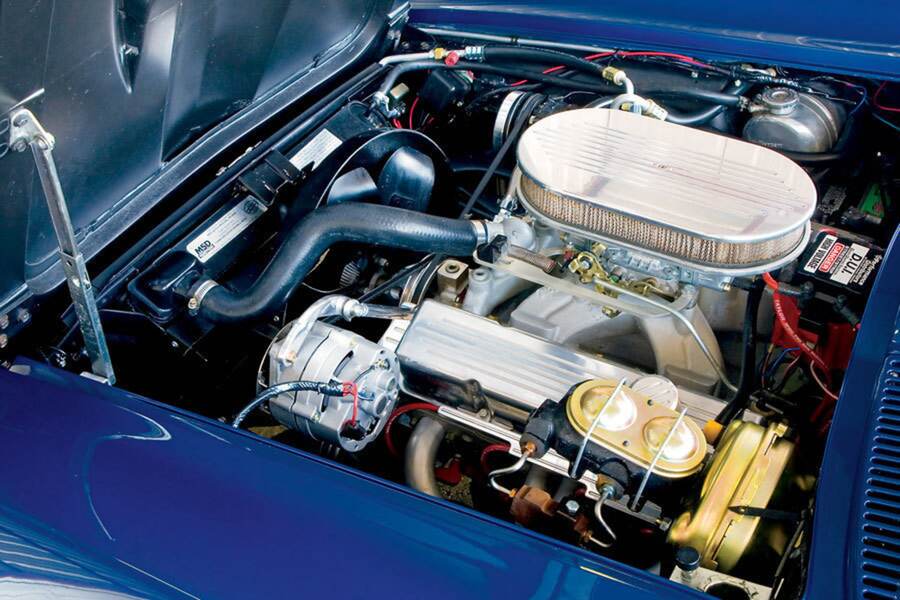 After the demolition derby was over, the actual work began. Comeau removed what was left of the body from the frame, being very careful not to break the tub in half. After removing any remnants of the unwanted panels, he stripped multiple coats of paint and discovered serious rust on the birdcage directly behind the seats; he ended up replacing the rocker panels and the doorjambs. At this point, the body was no longer in danger of breaking in two.

With the body secure, the frame was next on the list. Since the Jeep frame was unusable, Comeau found a nice rust-free Corvette frame that he sand-blasted and then refinished. From there, he assembled the suspension with all-new components. Comeau then installed a 3.36-ratio rear end and an M21 four-speed manual transmission. The goal was to have a complete rolling chassis before the body was mated to the frame.

Nothing was right on this car, so trying to do a proper restoration was pointless,” says Comeau. With that in mind, his powertrain options were fairly open. Staying along the same lines as the previous ’64 he had done, Comeau decided to install a stroked small block. He wanted an engine that would deliver a good compromise between high performance and real-world drivability. He contacted Steve’s Machine Shop in Liberty, New York. The mechanics there began with a 350-cid block that was stroked to 392 cubic inches. A set of Dart aluminum heads were used to keep front-end weight to a minimum; all the bolt-on parts were also fabricated in aluminum. The compression ratio was kept at 10.75:1 to be able to run on pump fuel. For the cam, Comeau opted for a mild roller unit that yielded a smooth idle and would allow the aftermarket air-conditioning unit to function properly. For the exhaust, he went with a 2.5-inch Magnaflow system. This engine proved to be rather stout on the dyno, pumping out 438 horsepower at 3,800 rpm and 520 lbs-ft of torque at 5,700 rpm. 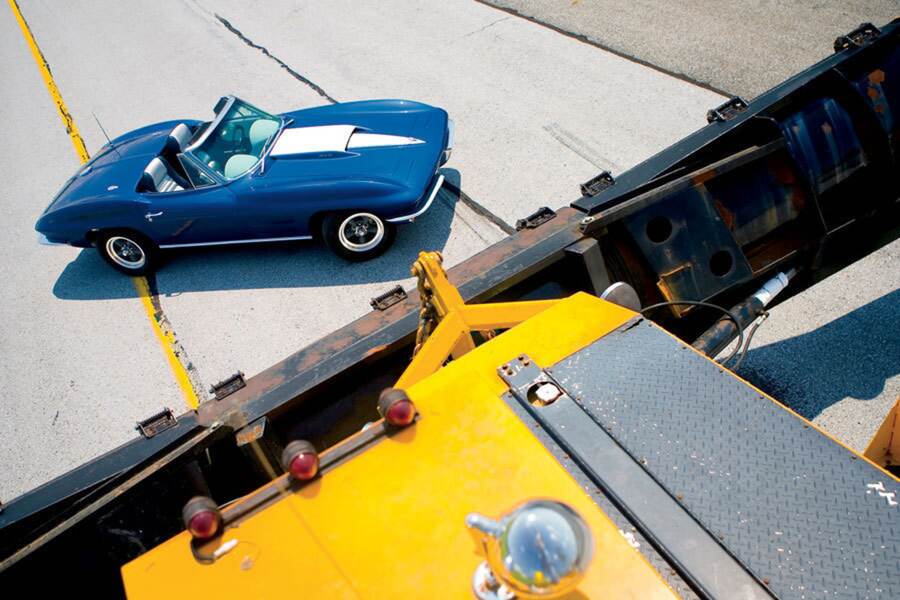 With the rolling chassis complete, Comeau mated it with the central body structure. He then installed a lot of new fiberglass pieces, including a nose, quarter panels, a taillight panel and a ’67 big-block hood. After this stage was complete, Comeau spent well over 300 hours preparing the body for paint.

His plan was to use an existing Corvette color, preferably one that was period-correct. He ended up shooting it in ’67 Marina Blue, but there was a problem: “I did not like the color, nor did anyone else,” says Comeau. “So I sanded it down again and gave up on period-correct colors.” He decided to visit some new-car lots and check out what was on the sales floor. Ironically, he came across a new Jeep that was painted a stunning shade of blue that he felt would be right for his project, so the ’64 ended up being repainted ’09 Jeep Deep Water Blue Pearl. Says Comeau, “The change was amazing!” 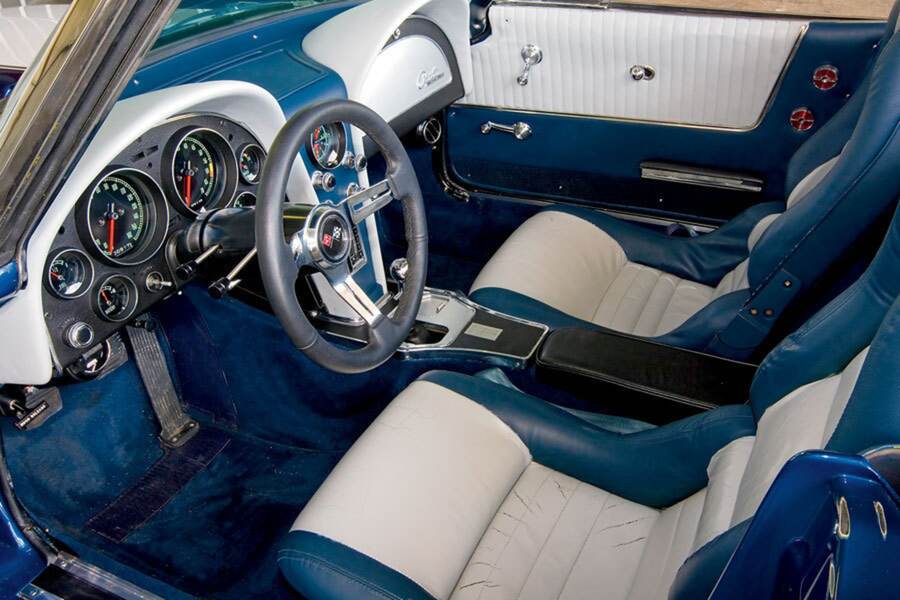 The next part of the rebuild was the interior. Comeau opted to keep it all as close to stock as possible. The first thing he redid was the dash—he rebuilt all the gauges—then he installed a Vintage Air air-conditioning system, as well as an Ididit tilt steering column. Comeau then fitted a new wiring harness and insulation material. He sourced the seats from a third-gen car. As for upholstery, he went for a two-tone look using GM colors—a mix of Dove Grey and Royal Blue that works well with the exterior color.

The time had come to fire up the engine. The wires were connected, fuel was added and the key turned. The V8 started right away without any problems. After he topped off the fluids and charged the air-conditioning, Comeau had the Corvette aligned. “The trip back from the alignment shop was a joy,” he says. “The car drove smoothly, not even a rattle. Everything worked perfectly, including the air-conditioning.” 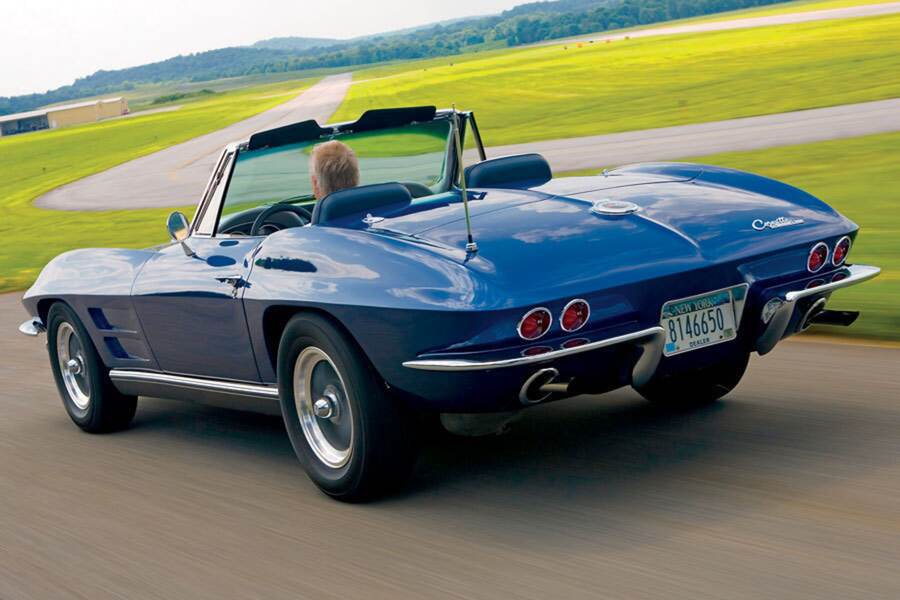 For Comeau, the frustration of not being able to do anything with the other ’64 was cured when the restored “Truckster” hit the road. “This Corvette has been driven for 1,000 miles so far with absolutely no problems,” he says. “I guess it is the car’s way of thanking me for rescuing it from four-wheeling hell.” 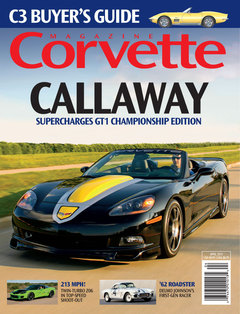