Resurrected from the grave as a convertible and saved from neglect as a coupe, this ’65 show-stopper has finally found the promised land. 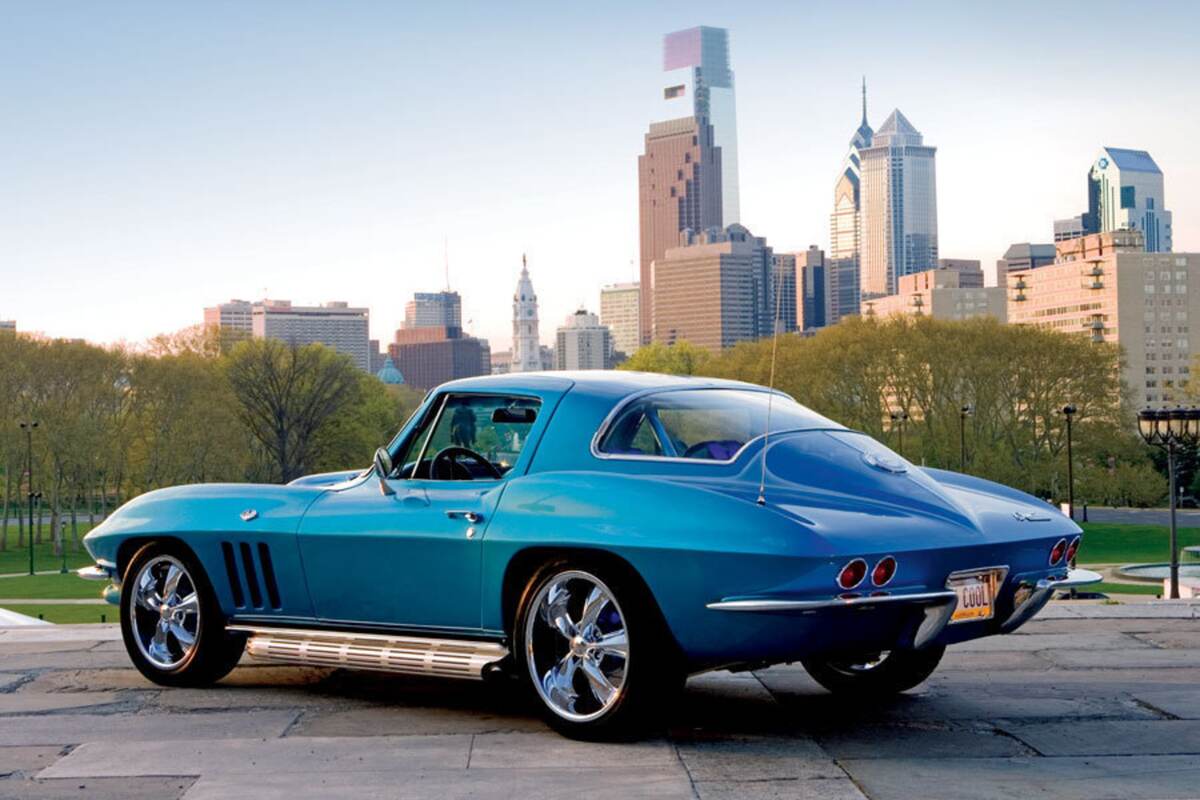 For Pennsylvania native Randy Hofer, this ’65 restomod is the culmination of a dream—not just his, but that of all the previous owners who had a hand in putting this car together. Unlike some projects that just seem to fall into place, this one was a bumpy, obstacle-ridden ordeal that spanned 21 years.

It all started in 1987, when John Puccella was driving through West Chester, Pennsylvania. He spotted what appeared to be the familiar shape of a mid-’60s Corvette in the weeds behind a body shop. Never one to pass up an opportunity, he decided to stop and satisfy his curiosity. To his surprise, what he saw was indeed the remains of a ’65 convertible.

At first glance, the car appeared to be unsalvageable. It had been sitting there for many years, ravaged by scavengers and battered by the elements. Parts like the headlight buckets were missing, along with the wheels and most of the interior. Optimistic that some parts were still useable, Puccella made the shop owner an offer, but the car was owned by someone else. The shop owner said that he would try to find the owner of the car and see what he wanted for it. That turned into a big problem: The owner of the car was difficult to reach because he was in jail. 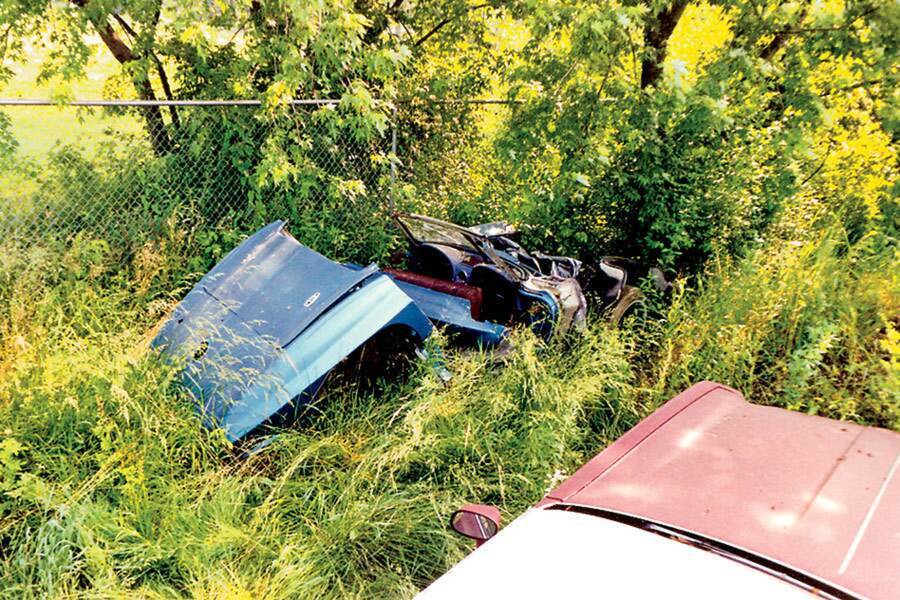 After two years of repeated visits to the shop and numerous phone calls, Puccella managed to purchase the blue ’65. The two-year span had given him plenty of time to make plans for the pile of parts he had purchased, especially the frame and drivetrain. Puccella’s enthusiasm for the project also sparked the interest of his lifelong friend, Drew Young, and the two agreed to assume joint ownership of the car.

In May 1990, the next piece of the puzzle fell into place. Puccella and Young went to a Corvette show in Willow Grove, Pennsylvania. As soon as they entered the event, they spotted a ’65 Corvette coupe body on a trailer. It looked to be in as rough a condition as their convertible; the entire rear clip was missing. Luckily, a brand-new rear clip, along with three boxes of parts, was also for sale. Realizing that this was a golden opportunity, Puccella and Young bought the whole shebang, including the trailer the body was sitting on. Young wrote the check, which for him required incredible commitment: He had just been laid off from his job the previous week.

With the acquisition of another mangled car and limited space to store it, Puccella had a concrete pad poured at the end of his driveway; it was christened the “Corvette Assembly Pad.” This would become the staging area where the morphing of these two cars into one would take place. 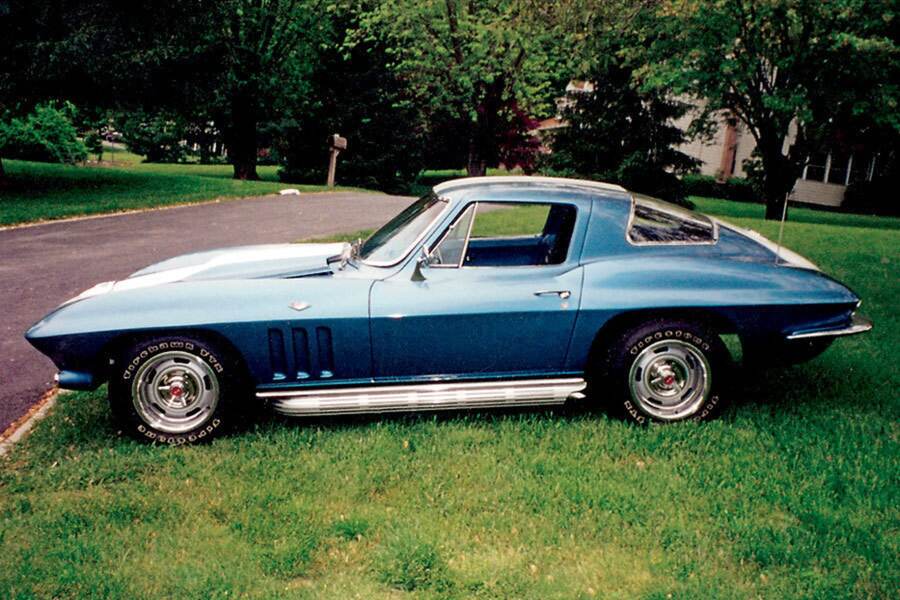 One of the key issues that needed to be resolved in the early planning stages was what engine would be used. The one that came with the convertible was beyond repair. Since the goal was to create a car that didn’t have to conform to any set of rules, the pair decided to use a spare engine from an ’88 Corvette that Puccella had modified. The plan was for it to be mated to a stock 4-speed manual gearbox.

Fast-forward nearly a decade to the end of 1999, and Puccella and Young had a ’65 coupe with a ton of new parts that was ready for paint. After careful consideration, they decided on Nassau Blue since it was the coupe’s original color. After the car was completed, however, it was seldom used, spending most of its time parked in storage.

By 2006, the friends realized that the ’65 would need another restoration. For Puccella, that became a problem. He was busy with the day-to-day running of his business, Trappe Auto, and didn’t have the time to devote to the project. As a result, he sold the Corvette outright to Young, who had a longstanding desire to transform the car into a substantially more radical restomod. Unfortunately, before he was able to begin the project, he became ill, and told Puccella that he just didn’t have the energy needed to complete his dream. 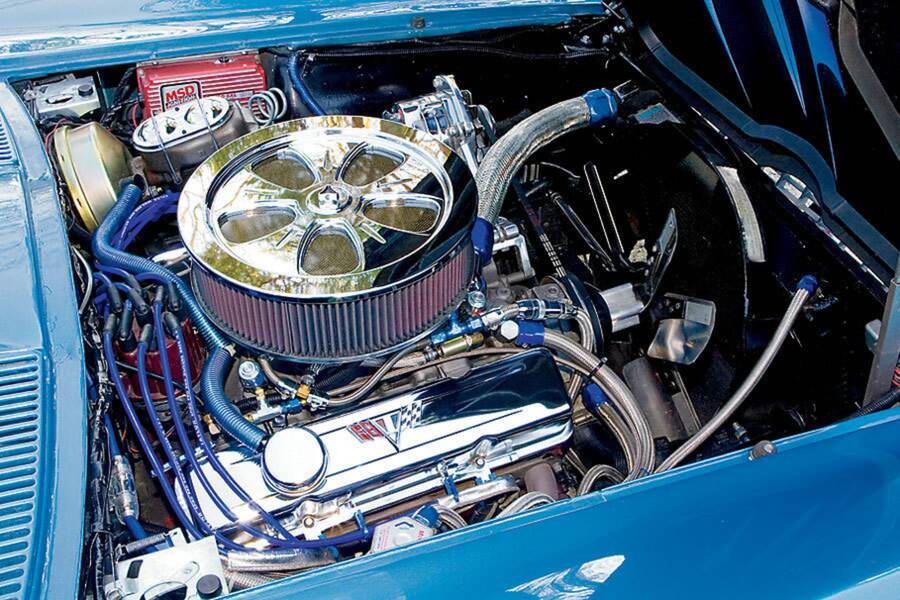 The following year, Puccella spoke with Hofer about buying the ’65 coupe at a Keystone State Corvette Club meeting. Puccella was a past president of the club, while Hofer was the current one, so the men knew each other well. Puccella told Hofer that Young was willing to sell the ’65 coupe. As it turns out, Hofer also had a desire to build a mid-year restomod. Having owned several stock C2 show cars, he was looking for the right car that would allow him to enter into modified and custom show classes. Confident that he had found the ideal candidate, he purchased the car from Young.

For Hofer, the task of rebuilding the ’65 began in late 2007. He was very clear about what he wanted to achieve with the car and how he would proceed. His goal was for it to have a strong custom visual presence, yet maintain the essence and elegance of the mid-year body.

“One of my first requirements was for the car to have a low, aggressive stance,” says Hofer. This meant modifying the suspension. Up front, he opted for shorter heavy-duty springs, while at the back special-length rear bolts were fabricated to accommodate a one-piece fiberglass leaf spring. Additional suspension work included fitting offset trailing arms and power rack-and-pinion steering. Power brakes with a proportioning system were also fitted. Ironically, it was Puccella’s shop that did the work. 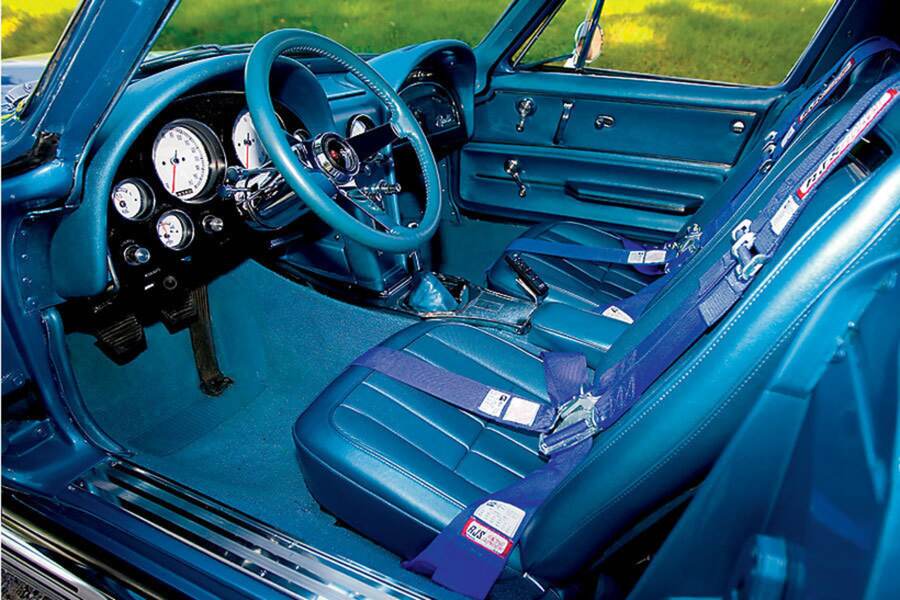 When it came to propulsion, Hofer had a good starting point. The ’88 Corvette engine had been fully rebuilt by Puccella in 2004. He had bored and stroked it from 350 to 383 cubic inches and performed a full balance-and-blueprint job. Hofer’s output goal was 500 horsepower.

To that end, a lot of new hardware was bolted on, including a Competition Roller Cam, World Products Heads, Chevy Bowtie rods, Speed Pro Hypertec pistons, an Eagle Steel crankshaft, MSD ignition, Hooker Ceramic headers, a 650-cfm Demon carb and an Eldelbrock intake. The 4-speed gearbox and 3.55:1 final drive were retained since they were still in excellent condition. 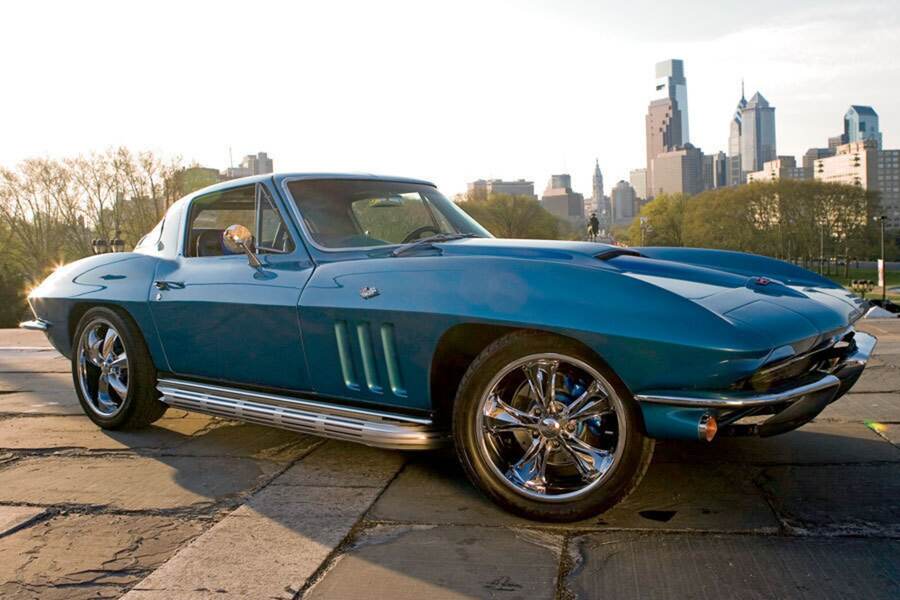 In February 2008, Hofer turned his attention to the exterior, handing the Corvette over to Collegeville Auto Body shop. The body was stripped and sanded to the gel coat, then hundreds of hours were spent preparing the fiberglass for the base coat, which again ended up being Nassau Blue. The prep work alone took ten weeks.

Since Hofer was after a custom theme, he wanted some form of airbrush work to be done, and commissioned local artist Kristoffer Ziegler to wield the gun. After discussing various options, Hofer and Ziegler decided that the artwork would center on the big-block-style hood and the coupe’s rear window. The goal was to create graphics that would be dynamic, yet subtle and tasteful.

Over the course of many weeks, Ziegler came up with various design possibilities. He would airbrush ideas on scraps of sheet metal laying around the shop. Explains Hofer, “This process proved invaluable. We learned what looked good from many hours of trial and error. We finally decided on a design which would incorporate the Chevy bowtie—front and back—and a stylized version of the fleur-de-lis and crossed flags on the hood.” 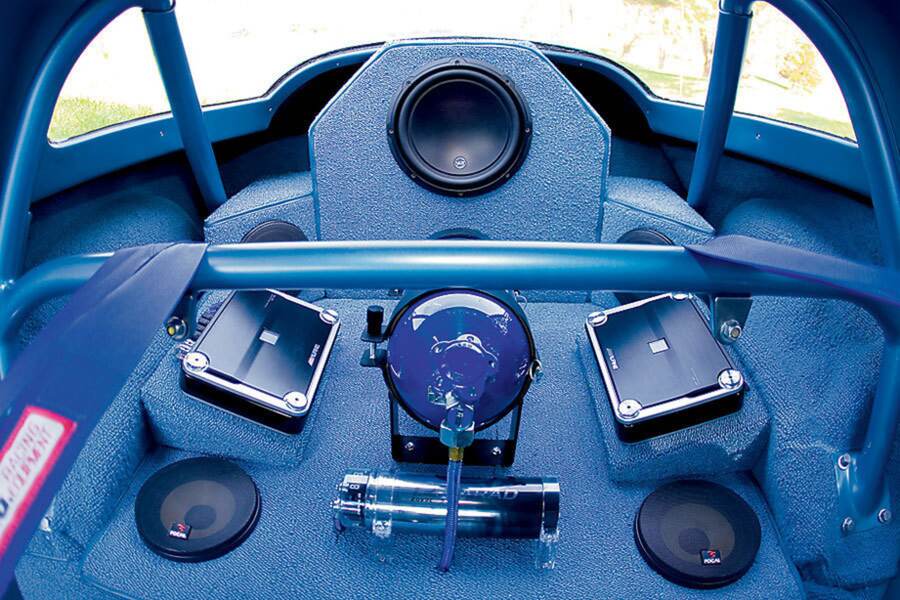 With the design finalized and the prep work on the body completed, it was finally time to apply the PPG Nassau Blue base coat. That same day, Ziegler started the graphics. Going well into the night, he ended up spending 18 continuous hours airbrushing the artwork in Pearl White and Electric Blue. “The car spoke to me like no other canvas,” says Ziegler of the experience. “The natural lines of the ’65 spoke loud and clear! This Corvette is so sexy to begin with. For me, it’s like putting make-up on a super model, she doesn’t need it but she looks damn good in it!”

The final phase in the project was the interior. In keeping with his desire to maintain a blend of classic elements and modern comforts, Hofer added ’75-style Corvette seats with Al Knoch custom bright blue covers, a chrome tilt steering column, a chromed ’79-style steering wheel, a chromed console, a custom bright blue leather boot cover and white-face gauges with blue LED lights. Since the rules of the game at custom car shows have changed over the years, with judges now giving points for in-car entertainment, Hofer had a 1,200-watt audio system installed.

With the addition of a 100-shot nitrous-oxide system to extract even more power from the small block, Hofer decided to have a 4-point roll bar and 5-point racing harnesses installed as safety measures. The control buttons for the NOS system are cleverly hidden in the ash tray.

In May 2008, Hofer showed the ’65 for the first time. It proved to be a crowd pleaser and came away with a peoples’ choice award. It continued to do well throughout the year, garnering a total of 15 awards at various shows, including best of show, best paint and sponsor’s choice. Recently, Hofer has done some additional detail work, which he hopes will lead to even more success.

As much as he enjoys the competition, however, Hofer gets the most satisfaction when he shares the turbulent story of his car and how it was resurrected from the automotive grave. The original owners have also expressed a real sense of satisfaction in being able to see how their hard work and perseverance has allowed someone to fulfill a dream—one that they also share. 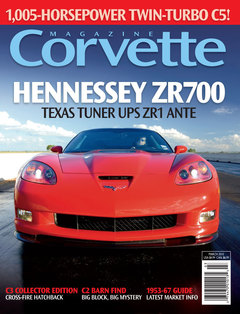