When it comes to C1s, this fuel-injected ’57 is as original as they come. 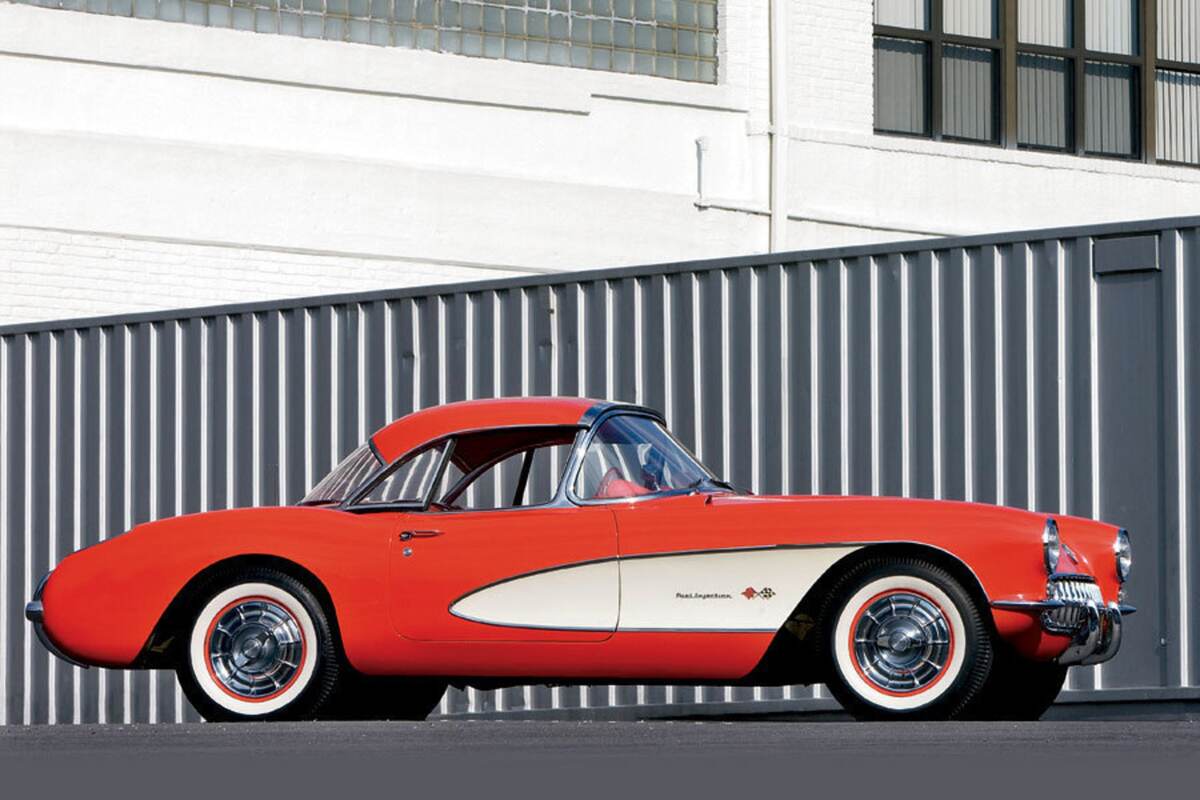 Back in 1957, $484.20 was about one month’s salary for the average American. It also represented the cost of Corvette option 579B, a high-horsepower fuel-injected 283-cubic-inch V8 engine. That relatively high price tag goes a long way in explaining why a mere 713 buyers chose to add the fuelie powerplant to their new Corvette.

However, those who did ante up got their money’s worth and then some, because 1957 Corvettes with the 283-horsepower fuel-injected engine were among the fastest production cars of the era. Equipped with an optional 4-speed manual gearbox and a limited-slip differential with a 4.11:1 final drive ratio, a ’57 fuelie could reach 60 mph from a standing start in 5.7 seconds, turn a quarter mile in 14.3 seconds and top out at over 130 mph.

A significant number of ’57 fuelies ended up on the racetrack, and their successes were notable, including a class win in the 12 Hours of Sebring and an SCCA B-Production national championship. Nearly all of the rest were used and abused on the street, racking up the miles and suffering accidents, theft and all the other usual indignities that lead to near-extinction. The end result is that today, more than half a century after they were built, real ’57 factory fuelies are rare indeed. 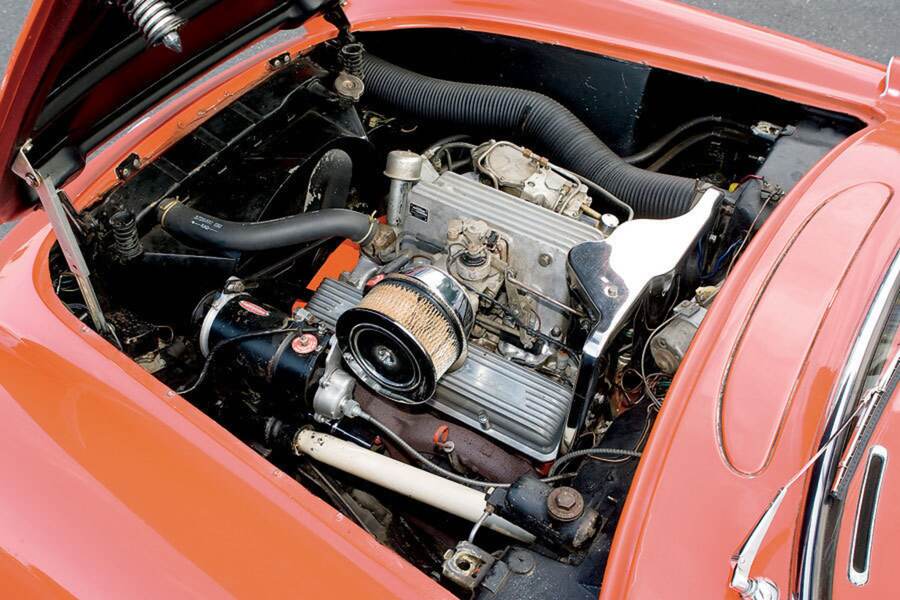 There are, of course, varying degrees of rarity, and what makes this Venetian Red example stand out from the rest is not where it’s been or what it’s done, but rather where it hasn’t been and what it hasn’t done. Simply stated, it hasn’t been much of anywhere and hasn’t done much of anything. It sounds a bit boring, but 52 years of near non use has yielded what is likely to be the most original, unrestored fuel-injected ’57 Corvette on the entire planet.

Anthony Carlisi bought the car new from Manhattan Chevrolet dealer Don Allen. Carlisi was in the United States Merchant Marine and spent most of his time out at sea. That explains why the car was ordered in January, built in February but not delivered until June. It also explains why it was very rarely driven.

We’re not sure what became of Carlisi, but do know that by the early ’60s, the car was owned by his girlfriend, and from her it went to a painter, who had seen it while doing some work in her house. The painter brought the car to his home in Floral Park, New York in about 1964. He used it very sparingly for the next 35 years. In fact, he normally drove the Vette only once a year, taking it several blocks from his house to display it in the Kiwanis Club of Floral Park’s annual antique car show. 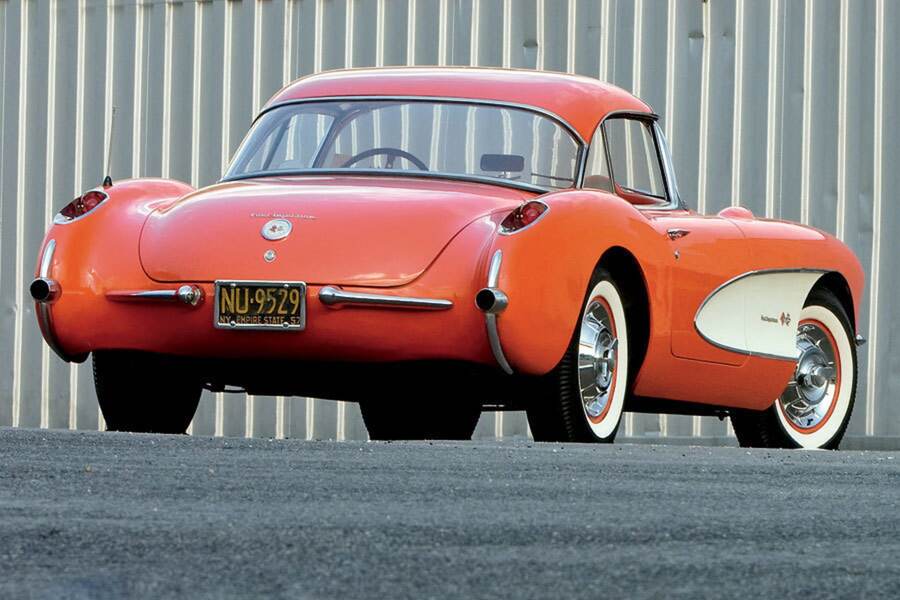 Corvette and muscle-car collector Bill McCabe is quick to point out that he’s not the world’s foremost Corvette expert, but decades of experience in the hobby combined with a keen instinct enable him to immediately separate the wheat from the chaff—the first time he saw this fuelie, he was rendered speechless. “I just could not believe it when I saw this car for the first time,” he recalls. “I had never seen a ’57 that was this original, let alone a fuel-injected ’57. And there it was, just sitting at a local Kiwanis Club car show around the corner from my house!”

McCabe quickly asked whether the owner was interested in selling the car and was disappointed, but not surprised, to learn that he wasn’t. He stayed in touch, however, and periodically reminded the painter to please call if circumstances changed. In 1999, the call came and McCabe didn’t hesitate for a moment. 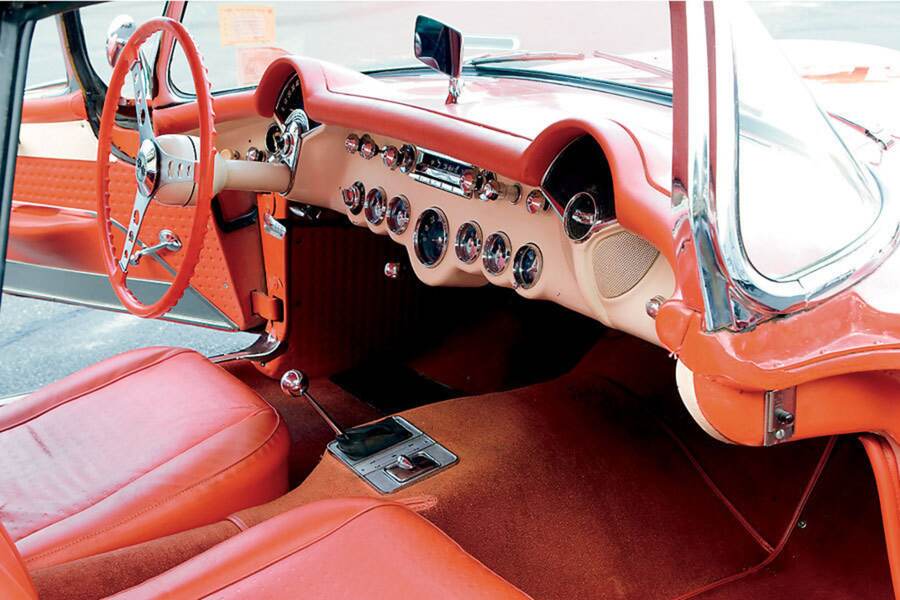 In addition to a variety of 100-point restored cars in his collection, McCabe has several beautifully preserved cars, but none are quite as old or quite as special as this Corvette. The paint is not perfect, but it is entirely original—with no spot repairs or touch-ups whatsoever. Because the car was garaged its entire life and spent so little time in the sun, its St. Louis-applied lacquer is free from crazing and still wears a proud shine.

The interior is similarly factory original, including the carpeting, seat upholstery, hardtop headliner and door panels. During the photo shoot, McCabe removed a laced-on steering-wheel cover that had undoubtedly been installed decades ago, revealing a virtually perfect steering wheel.

The only modification to the interior, and in fact the only modification to the entire car, is the addition of three extra gauges. Two of them, one for oil temperature and another for manifold vacuum, are understandable, but the third, for generator voltage, is slightly baffling, given that a voltage gauge was standard fare in all ’57 Corvettes. Regardless, the original owner installed these extra gauges and McCabe thinks it appropriate to leave them alone. 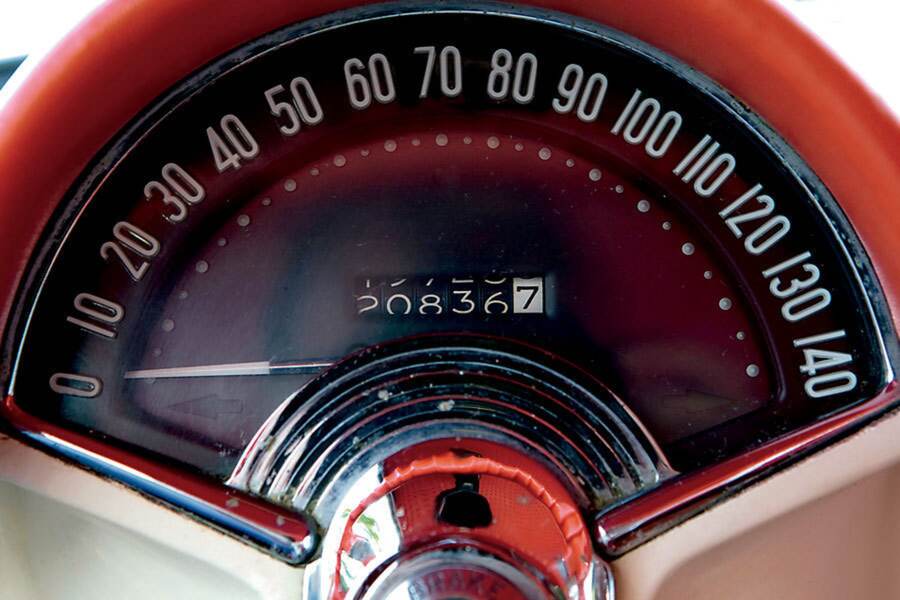 The original soft top, top frame, window glass, weather stripping, emblems, stainless trim and chrome all wear a light patina, yet they are so close to mint as to belie this car’s age.

Chevrolet first offered a power-operated soft-top option for Corvettes in 1956, and this is one of 1,336 cars that came with the $139.90 add-on in 1957. The system was rather complex, with loads of wiring, switches, brackets and other paraphernalia to help insure that everything went where it was supposed to when it was supposed to. It was all mounted behind a cardboard trim panel at the rear of the trunk. Motive power came from hydraulic rams fed by an electric motor-driven hydraulic pump. The system’s hydraulic fluid was nothing more than common brake fluid, which was a bad choice for two reasons: It readily absorbs moisture, which in turn encourages the corrosion of the system’s internal parts, and when the fluid leaks out and gets all over the trunk, it bubbles the paint and makes a big mess. 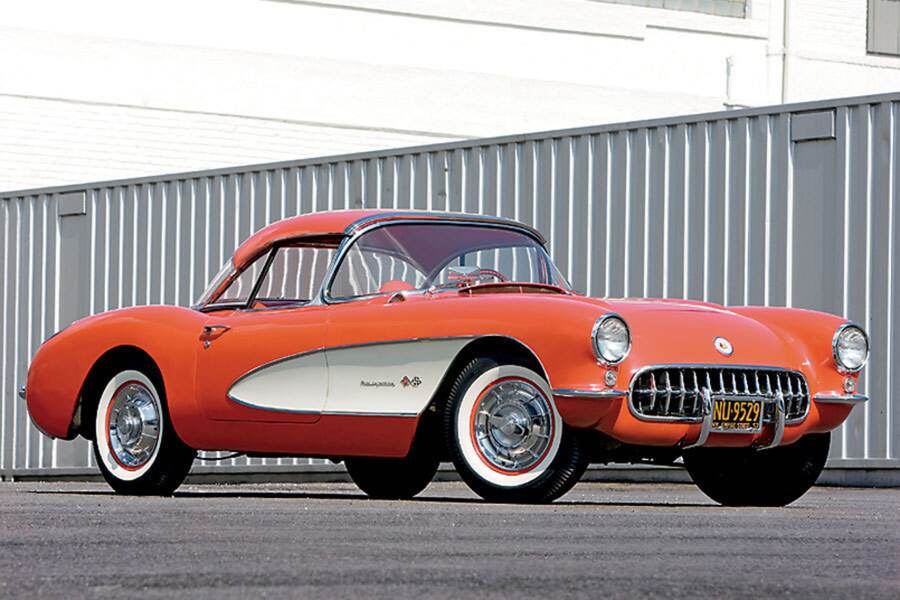 The system in this car did leak fluid in the past, and did scar the paint on the trunk floor, but fortunately it didn’t leak enough to reach the spare tire. The spare has never been used and is perfect. It still wears ink stampings on the tread, as well as a shipping label that reads “CHEV ST. LOUIS, DIV OF GMC, ST. LOUIS, MISSOURI.”

Mint original spare tires are quite rare in ’57 Corvettes, but they are not unheard of. Original road tires, on the other hand, are beyond rare. This car doesn’t just have original tires—the hardcore Corvette enthusiast can put together original sets using original spares from four different cars—it still has the original tires it was wearing when it rolled out of the Corvette assembly plant in February 1957! Light but pervasive sidewall crazing is the only thing that gives away the fact that these “gum dipped” Firestone Deluxe Champion whitewalls are not reproductions.

The odometer indicates an honest 20,836 miles, and the car runs and drives as you would expect a gently used vehicle with that many miles behind it to run and drive. The original exhaust system’s throaty idle turns into an urgent roar with a stab on the gas pedal, demonstrating the rapid throttle response that gives the fuel-injected C1 even greater perceived performance than its output would indicate, especially when compared with carbureted cars. 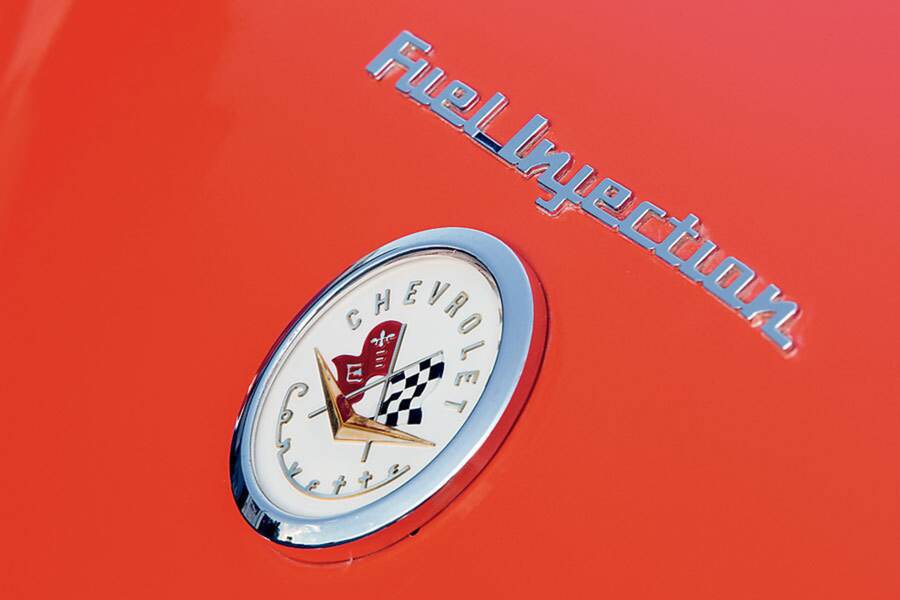 The engine’s power is put through the factory original 3-speed manual gearbox en route to that low-gear rear axle. Given the car’s long list of options, including the power-operated soft top, a removable hardtop, AM Wonderbar radio, two-tone paint, parking-

brake alarm, courtesy lights, whitewall tires and heater, it’s logical to assume that the original owner would have ordered a four-speed manual transmission. But alas, the four-speed option was not released until April 9, 1957 and this car was ordered four months prior to that.

The underside of this masterpiece was never smothered in undercoating or assaulted by a “rattle-can restoration,” and is therefore as honest as it gets. A light rust patina covers those areas where the factory finish has weathered away. Nothing underneath the car has been changed, and the frame stencil and various inspection marks are still clearly visible.

McCabe fully appreciates the historical significance of his fuelie and has taken steps to preserve its original condition. “In a sense, I really don’t ‘own’ this car,” he opines wistfully. “I am simply lucky enough to be its caretaker, and my responsibility is to make sure it’s passed on to the next caretaker in the same wonderful state of preservation I found it in.” 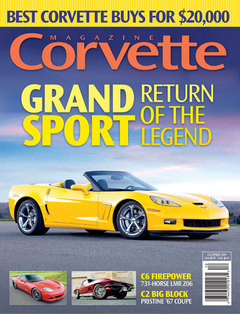