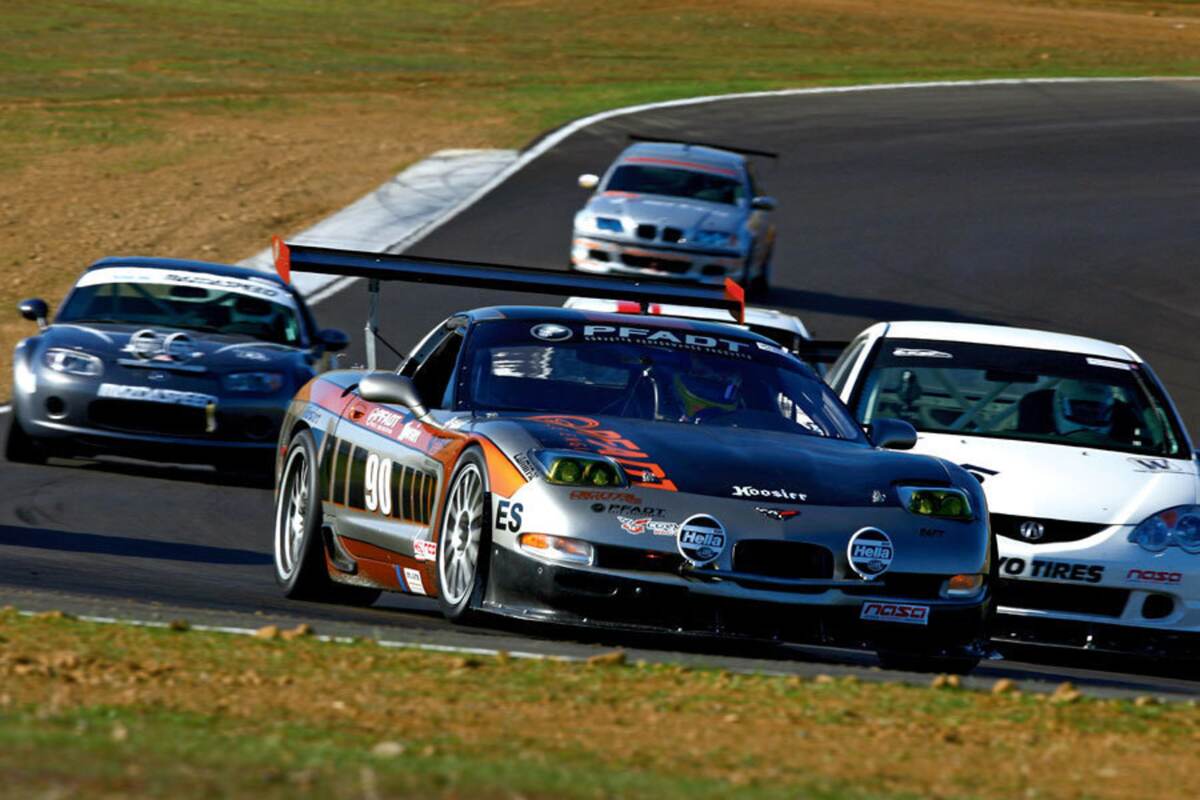 Danny Popp looks out over the pit lane, sets his tools down and sighs. The sleeves on his driving suit are pushed up to his elbows, dark circles frame his eyes and he’s wearing a greasy pair of Mechanix gloves. Every two minutes, a silver C5 thunders past the pit wall; even if you’re not watching, you can feel it whomp by the start/finish line. The vibrations make your toes tingle, but Popp doesn’t flinch.

Five minutes later, the Corvette dives onto pit road and jerks to a halt in front of Popp. Aaron Pfadt, a compact, brown-haired Midwesterner with a boxer’s build, climbs out of the driver’s seat. He helps Norm Goldrich, a Porsche club racer from Ohio, strap himself into the car, and the Corvette tears back onto the track.

Two minutes later, Goldrich is on the radio: The Corvette has developed a few handling quirks—too much oversteer in some of the faster corners and an annoying rear-end twitch under braking—that didn’t exist in testing. Making matters worse, the steering rack began leaking during Pfadt’s stint, so Goldrich, like Pfadt before him, is forced to strong-arm the car around the track without power steering. And, troublingly, one of the corner workers has reported white smoke coming from the Corvette’s exhaust. 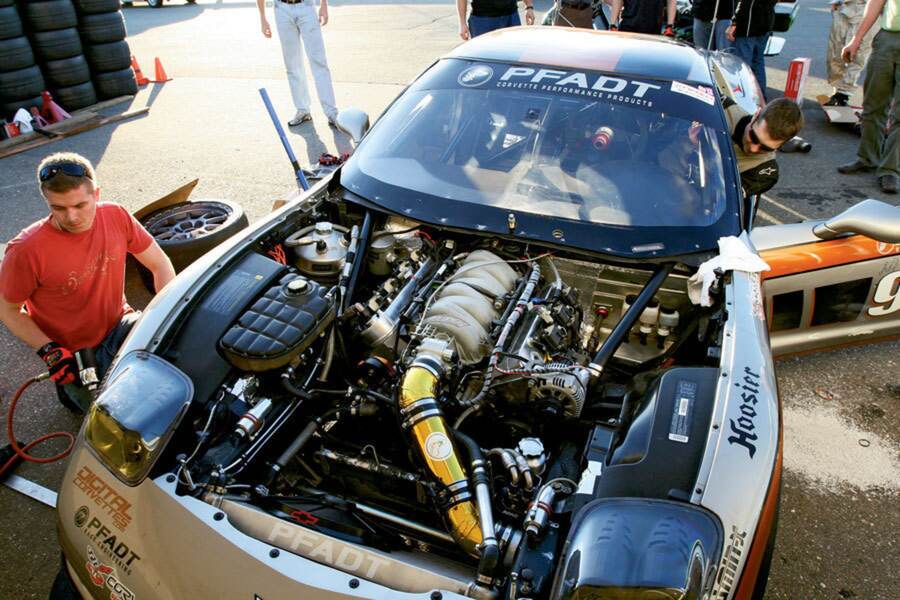 Pfadt looks at his crew chief. The clock on the starter’s stand reads 24:09:22—24 hours, nine minutes, and 22 seconds left to go. Problems this early in the race are not a good sign.

“Just tell him to drive through it,” he says. “If the car is safe, even if it’s miserable, run laps. Just keep going.”

Racing improves the breed, as the old saw goes, but what that pithy little aphorism doesn’t tell you is that racing also breaks things in ways that you couldn’t have imagined, or that it requires constant, skilled planning and engineering to keep everything from ending in an oily mushroom cloud of doom. Finishing first, as experienced hands will tell you, requires that you first finish, which requires that you stay one step ahead of anything that might go wrong. And the longer the race, the more things there are to go wrong. 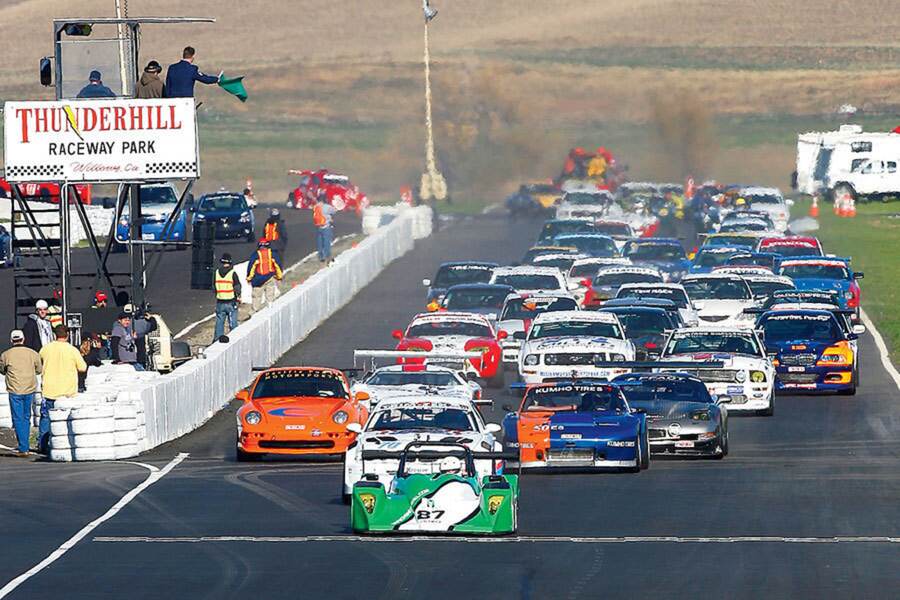 Consider, then, the 25 Hours of Thunderhill. Held every December at Thunderhill Raceway Park, just outside of Willows, California, it is the world’s longest closed-course endurance race—and yes, that’s a fact, not just a marketing slogan. It is exactly one hour longer than the famed endurance events held at Le Mans and the Nürburgring, and like those events, it’s known as a car-killer. Most of the teams that roll into Thunderhill’s paddock come prepared: Bringing everything from spare engine blocks to entire spare cars is considered reasonable and prudent planning.

Conveniently, Aaron Pfadt is no stranger to planning. The Salt Lake City engineer moved to Utah from Detroit a little over half a decade ago with his wife, Robbin. Aiming to start a small business, the couple gutsily left behind two solid jobs and almost everyone they knew. The result of their efforts is Pfadt Race Engineering, a company that specializes in suspension and race components for C4, C5 and C6 Corvettes. 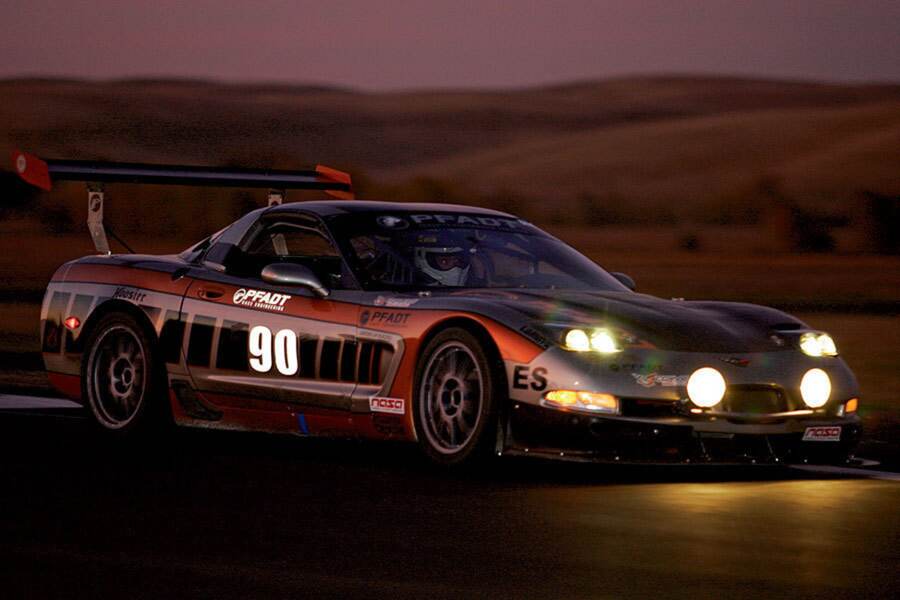 Pfadt campaigns a C5 in the National Auto Sport Association’s (NASA) Super Touring 1 road-race class. It’s that car that he has brought to Thunderhill, complete with a well-organized crew composed of friends and employees. From the start, the prognosis looked good: Pfadt had raced in the 25 once before, in a Corvette-powered Porsche 944, and he did fairly well. He also won his class at NASA’s national championships in September. Going for a win at the 25-hour in a C5, a familiar car with the speed required to run up front, seemed like a logical next step.

Ninety minutes after Pfadt gives the order for Goldrich to press on regardless, another problem rears its head. This time, it’s the fuel system. “I paged through the digital dash,” Goldrich says after climbing out of the car, “and [the engine] was running really lean when the throttle was fully open.”

In the back of the Pfadt pit, someone lets out a groan. Positive thinking has ruled the day so far, but various problems have plagued the team since the first practice lap. Shortly after the car arrived at the track, input-shaft noises led to a late-night driveshaft removal. A wheel supplier shipped two rear alloys with the wrong offset, a mistake that resulted in a pair of shaved brake calipers and a lot of boiled brake fluid. Both fuel tanks were removed and inspected in order to try and trace an early fuel-starvation issue. Topping things off, the Corvette overshot Thunderhill’s noise regulations by a couple of decibels, and the solution required a time-consuming rearrangement of exhaust plumbing. All of this took place before the green flag dropped. 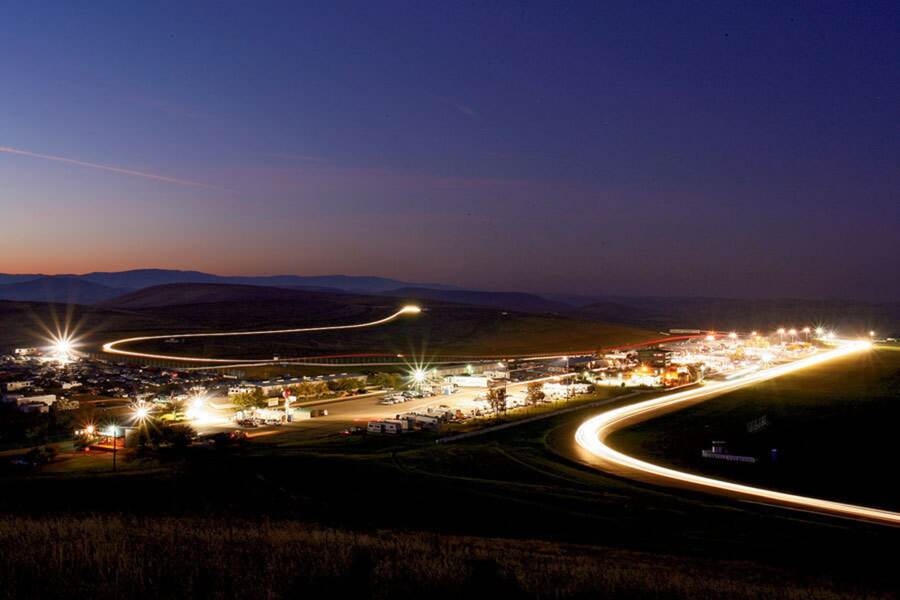 Three hours into the race, Pfadt holds court in the team’s support tent: At the risk of losing laps, the car is coming in. With just over 22 hours to go, both fuel tanks are coming out again, the in-tank fuel strainers are going to be removed and a second fuel filter is going to be plumbed in. While the car is off the track, Popp and one of the team’s mechanics will repair the leaking steering rack. The hope is that restoring some of the Corvette’s lost speed and making it easier to drive will be worth the downtime.

It’s been said that the Thunderhill 25 is NASA’s equivalent of the American melting pot, a race as diverse as it is large, and that statement isn’t far off: The starting grid for the 2008 25-hour was composed of 63 cars, no two of which were identically prepared. Because NASA prides itself on a run-what-you-brung approach to competition, disparity between entries is common. Professional race teams armed with 500-horsepower Daytona Prototypes, enclosed transporters and catering crews share the paddock with ramen-noodle budget racers fielding 100-bhp Volkswagen Golfs. Predictably, lap speeds vary greatly: Cars at the front of the pack often average 100 mph or more on Thunderhill’s 3.0-mile, 15-turn course, while the bottom end of the grid usually hovers around 75 mph.

Although the Pfadt team is just an amateur effort, its silver machine is one of the faster cars in the field. Even with fueling problems limiting his engine’s output, Aaron Pfadt was able to qualify with a 1:58.9 lap time, placing the car fifth on the grid. Pfadt is a talented driver, but a good part of his car’s speed comes from his engineering skill. He has something of a reputation as a suspension guru, and it’s not unfounded: At NASA’s 2008 National Championships, two of the three cars on the ST-1 podium wore Pfadt components. 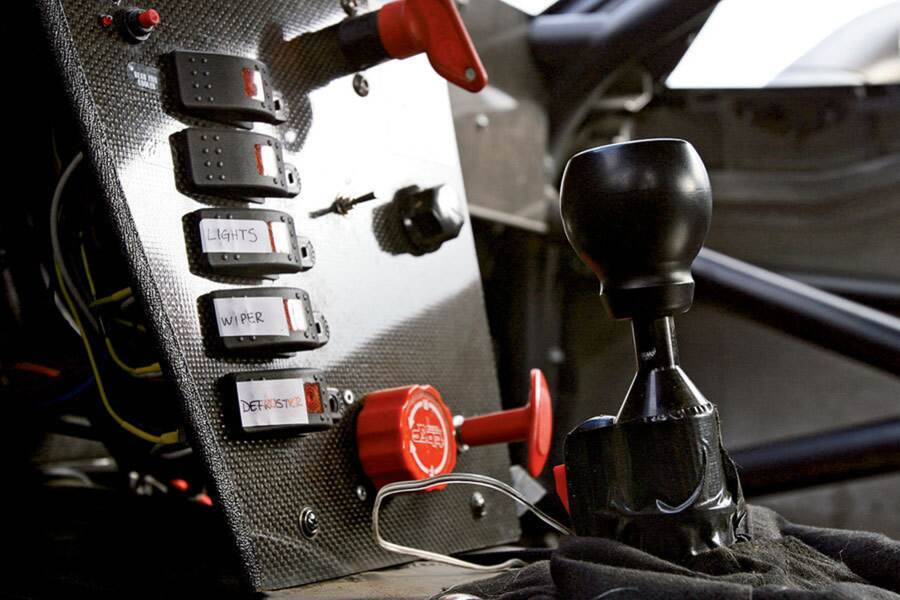 Nevertheless, endurance racing presents a unique set of challenges; durability, not speed, is the priority. “We just haven’t tested enough,” admits Pfadt crew chief Todd Imwald, watching the Corvette pull off the track. “We’re essentially running a sprint car, set up for shorter races, so there’s a steep learning curve.” Like most of the Pfadt team, Imwald is businesslike but jovial, and his good-natured sense of focus reminds us more of a professional crew chief than an amateur one. But a race like the 25-hour requires something more than just the right approach. “The car is fast enough,” Imwald says, “it’s just a question of making it live.”

Unsurprisingly, by the time the Pfadt team is done repairing the car’s fuel system, most of Thunderhill’s paddock is in disarray. Tools and parts are scattered everywhere, and more than a few cars have run into trouble. A late-’90s Pontiac Firebird is being loaded onto a trailer, a thick trail of oil leading to its nose. Two Miller Cup Ford Mustangs are up on jack stands, permanently parked. Wrenches are being turned and crash damage is being hammered out. 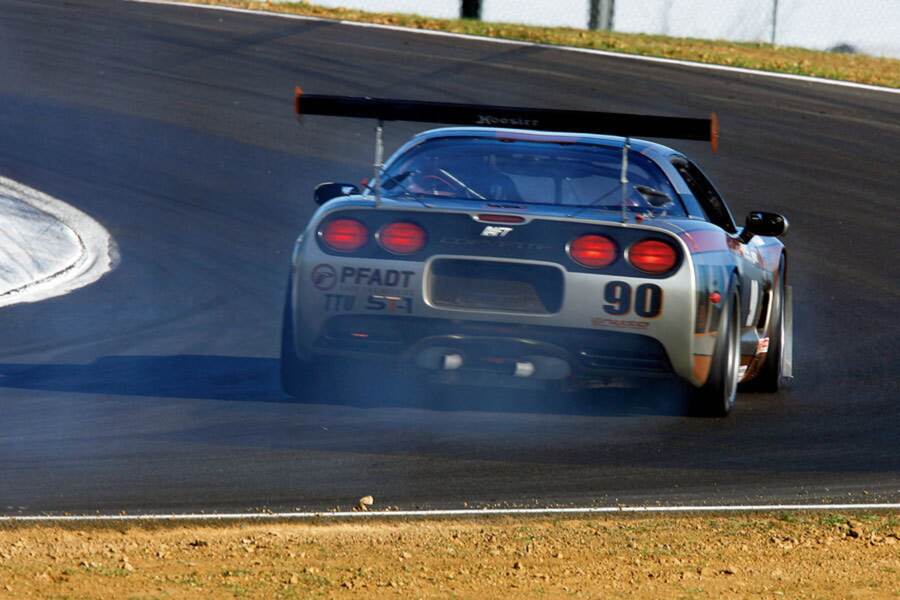 For the Pfadt team, things are finally turning around. As the sun sets, Imwald is standing on the pit wall, listening intently to the radio; he’s joined by the team’s fourth driver, a Corvette club racer from the Pacific Northwest named Dean Conti. The C5 flies down the front straight, slams into the first corner and slingshots through a group of slower cars, a bellowing howl echoing out its exhaust. Popp is driving. After watching the crippled Corvette limping around the track for hours, seeing it flogged flat-out by a gifted driver—and Popp, a former NASA champion, is just that—is downright hypnotic.

“That’s Danny for you,” Imwald remarks with a grin. “He’s saying that the car doesn’t have that much power; he just turned a 1:50.” Conti laughs, saying, “If he’d pulled that in qualifying, we’d have been third on the grid.”

The high times don’t last long, however. Shortly after six o’clock, just seven hours into the race, the corner workers wave their red flags. In the space of less than 20 minutes, a blindingly thick, syrupy fog has descended onto the track, reducing visibility to mere feet. Thunderhill’s front straight is suddenly an impenetrable gray wall. You hear the cars before you see them, the fog moving and swirling ominously, until—wham!—something with headlights explodes past you, only to immediately disappear back into the whiteness. NASA officials indefinitely suspend the race on grounds of safety. The cars are parked.

Things crank back up again at five o’clock the next morning. The fog has dissipated some, but it’s still present, draped over the track like stretched-out cotton candy. All told, the red-flag delay lasted some 11 hours, and while NASA officials have postponed the race’s end by three hours to try and compensate, this won’t help the Pfadt team. It’s mid-morning and the Vette is parked in the paddock, stationary and cold. Aaron Pfadt and the rest of the crew retire to the support tent to have breakfast.

“We went back out [at the restart], and the car ran great for a while,” Pfadt says, smiling ruefully. “Then it started to pick up a miss. We pulled the car in, we cleaned the fuel filter and we back-flushed the injectors. After that, it was perfect—the car was making full power, the lights were working great in the fog and I was just flying. And then the clutch started slipping. It’s frustrating, because we were phenomenally quick. I turned a 1:51 in the fog with the clutch slipping.”

The car is done.

For Pfadt, the race has been a study in frustration, a textbook example of how learning from your mistakes is rarely a calm and relaxing process. Some problems, like the fueling issue, are simply the result of bad luck—the team eventually discovers that a supposedly gasoline-proof sealant used on the fuel tanks’ quick-fill system decomposed in the presence of gas, filling the fuel lines with debris. Other issues, like the slipping clutch, are traceable to oversight. “The clutch had too many hours on it [before the race],” admits Imwald, “and it was just time for it to go.” Setbacks like these show how difficult it is to make a racing car—any racing car—go the distance. Even with huge amounts of skill, experience and resources, there are still countless things to go wrong.

As for the lessons learned? The overall win went to a Mazda MX-5, a car that lapped the track roughly 10 mph slower than the pole-sitting prototype. Most of the faster, front-running cars broke or crashed out, proving that speed and endurance aren’t natural bedfellows. And adding insult to injury, when the Pfadt Corvette briefly returned to the track to take the checkered flag, a slower car crashed into its left front corner, breaking a suspension upright. It was almost as if God himself wanted the car off the track.

Done, but not defeated, the Pfadt team begins to pack up. Aaron Pfadt finishes his breakfast, gets up from his chair and looks out at the track. Will he return next year? “It’s hard to come back,” he says, “but then, it’s hard not to come back.” 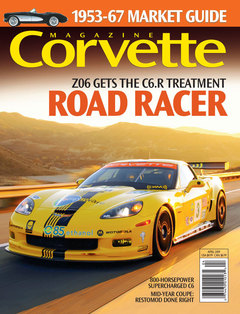