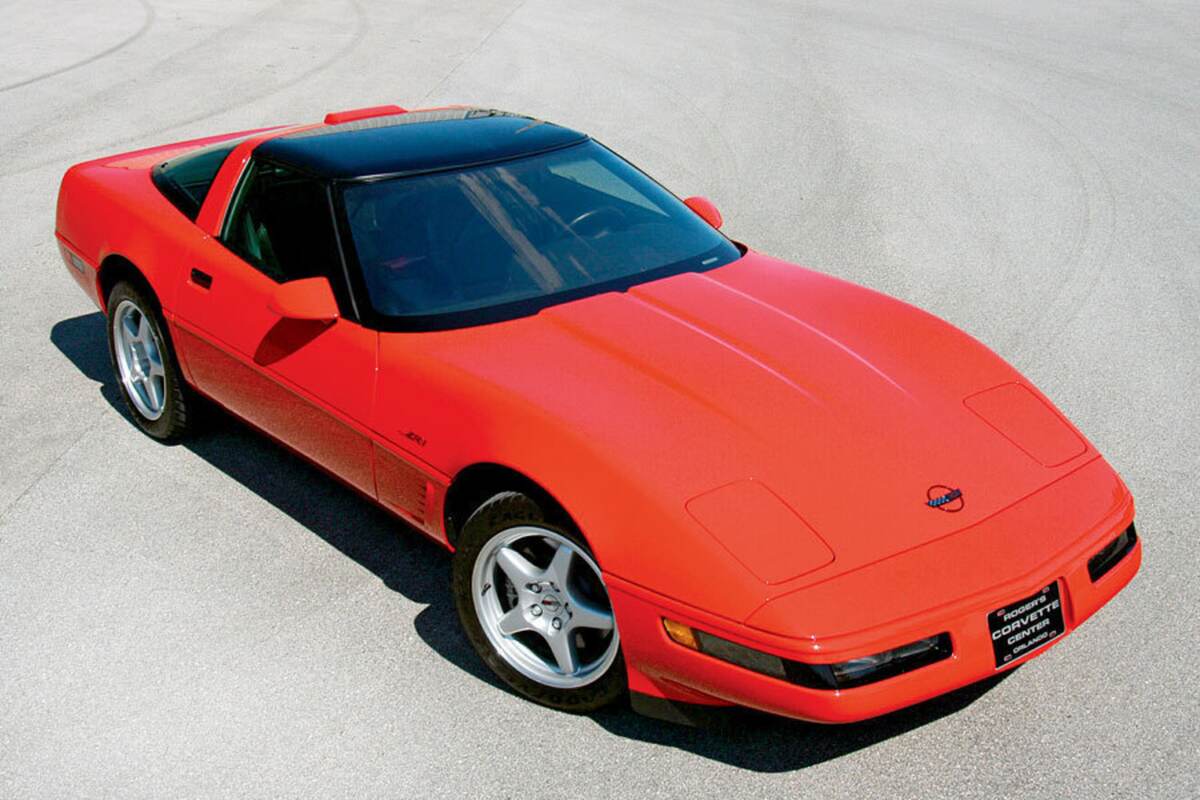 Dave McLellan had been retired from GM for nearly three years when he ar­rived at the Corvette Assembly facility in Bowling Green, Kentucky. It was Thursday, 27 April ‘95; he’d left in August of ‘92 following a 17-year stint as the Corvette’s second chief engineer.

Under McLellan’s tenure the third-gen Corvette had come back to life after the negative blows of the ’70s nearly emasculated it. Later, he created a fourth-gen car using cutting-edge chassis, engineering, and assembly concepts that would leapfrog the brand back into world-class status. Then, with each successive model year, he oversaw the refinement of that original de­sign, nurturing the C4 into a comfortable yet at­tainable GT masterpiece that would dominate SCCA racing for the rest of the decade. Yet even with all those accomplishments, the project McLellan considered his greatest triumph was the short-lived Corvette ZR1.

That exotic, four-cam machine was the reason McLellan was back in town. The following morning Chevy would mark the end of its production run with a grand ceremony at the Corvette plant. (The slogan for the day, in true PR reverse-speak, was “The Legend Lives.”) After the last ZR1 came off the line, Dave and Chevrolet’s then-general manager, Jim Perkins, would drive the Torch Red coupe a half-mile to the Nat­ional Corvette Museum, where it was to be put onto permanent display. How, in just over half a decade, the ultra-sophisticated ZR1 went from corporate flagship to bit­tersweet museum piece is a tale wrapped up in politics, economics, and the unforeseen consequences of technology. It’s also an object lesson in the sheer power of simple designs. 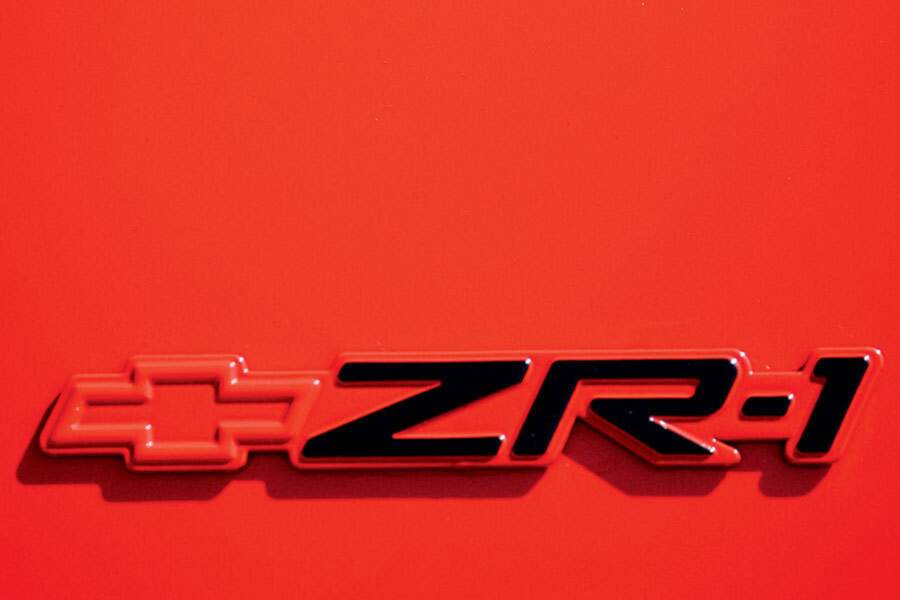 Though always seen as a ‘90s phenomenon, the roots of the ZR1 go all the way back to the dawn of the C4 program, when Chev­­rolet Engineering was looking at various alternatives to the long-lived GM smallblock. Among those considered by the team was a series of twin-turbocharged V6s and V8s. The V6 idea died early on, largely be­cause the division saw that a V8 was integral to the Corvette’s reputation. The twin-screw V8, meanwhile, got the ax due to some packaging and per­formance issues, but most importantly marketability. (Happily, the technical data gleaned to that point was handed to Callaway Cars, which developed the idea further and went on to sell turbocharged-V8 Corvettes out of Chevrolet dealerships).

In the mind of then-GM president Lloyd Reuss, the problem with the twin-turbo V8 was its image. The public, he felt, would see it as a low-tech solution—something Reuss and the rest of the GM hierarchy were desperate right then to avoid. In that context, a similarly powerful, high-winding, multivalve, multicam engine would be a better reflection on GM’s abilities, proving Detroit could build anything Europe or Japan could. Specifically, upper management was worried about a perceived lack of tech savvy that buyers ascribed to GM—an impression that, in an era of all-encompassing technical add-ons and patches, drove the company’s marketing people bana­nas. Reuss was additionally concerned that the upmarket march of Japanese entries such as the 300ZX and Supra would eventually compromise the Corvette’s marketshare; all those cars boasted complex, four-valve, multicam engines (or, in the case of the Mazda RX7, the same Wankel that GM abandoned as unworkable back in the ’70s). 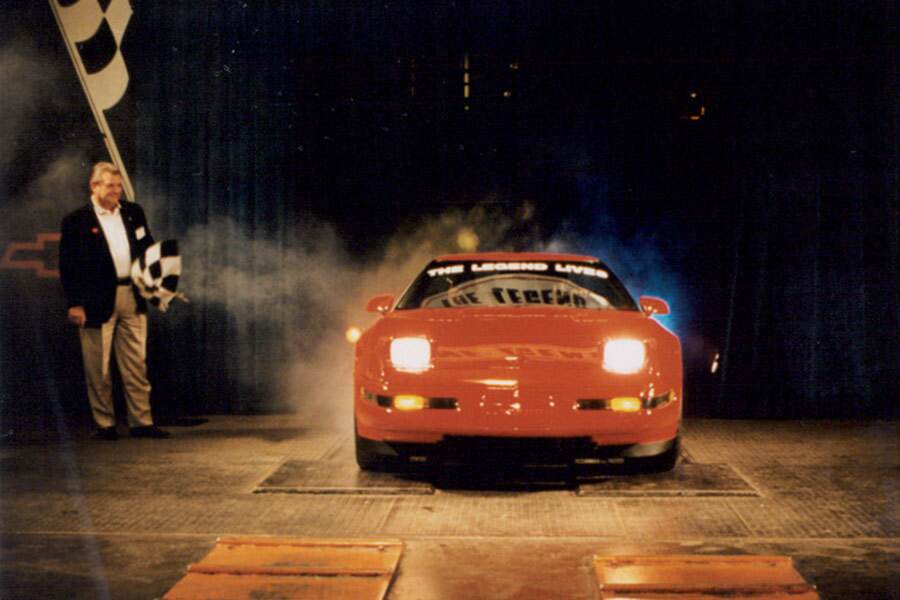 Image-wise, it didn’t matter how well Chevrolet’s old-school pushrod V8 actually worked; at that moment, GM needed something more glamourous. This was the tipping point at which Reuss decided his firm would develop a sophisticated, 32-valve, multicam V8 for the Corv­ette. He told the engine group to start doing research work toward that end, on the logical assumption that the existing V8 block could be adapted to this new layout. That concept led the team to Tony Rudd at Lotus in England, which at that time was un­der the GM umbrella.

After examining the British firm’s own new four-liter, DOHC, 32-valve V8, the Detroit camp asked Rudd to calculate some figures for fitting new heads—similar to those on the Lotus mill—to the current Chevrolet smallblock. Rudd did, and the the numbers he came back with estimated that new heads on the existing block would only kick out around 350 bhp. In­stead, Rudd suggested, GM should consider creating an all-new 350-inch engine starting from the oil pan up; in that way, outputs of 400+ horses and 400+ lbs-ft of torque could be achieved.

Since they were already up to their eyeballs with Lotus anyway, Reuss and GM ag­reed. A transatlantic team was set up so the Corvette group and Lotus could work together, ensuring the new V8 would fit the C4’s tight engine bay and thigh-high cowl. 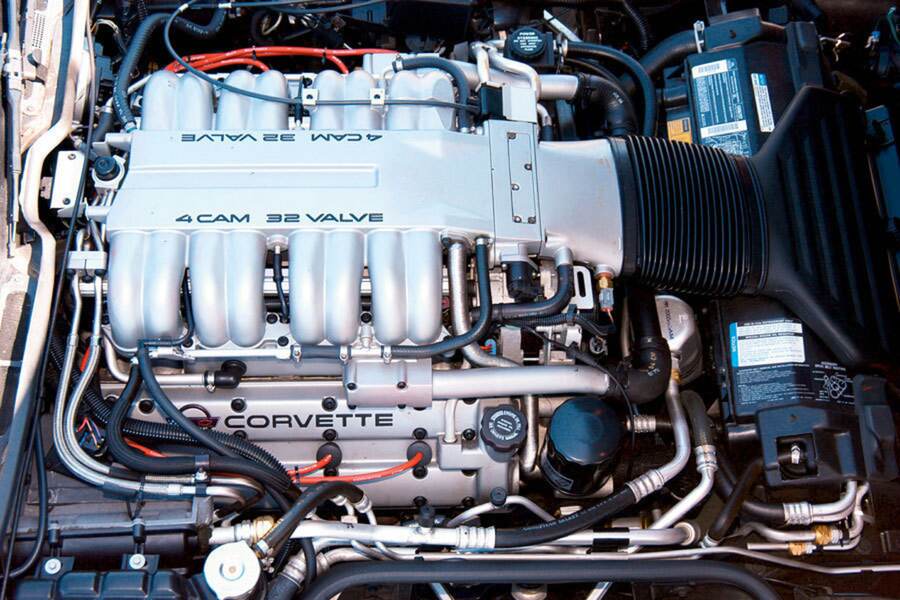 But while Lotus’s engineering-consultancy business was well suited to designing this new engine, its less-than-stellar assembly reputation made GM wisely look elsewhere for final production. They settled on Mercury Marine in Stillwater OK, an outfit which already had lots of experience in constructing low-volume, high-tolerance, reliability-critical aluminum engines. Mercury Marine would go on to construct a special assembly facility inside its Stillwater plant. Soon it was working with Chevy and Lotus on designs for the engine’s production tooling, even as some parts of the V8 were still on the drawing board.

Amazingly, this three-way “synchronous en­gineering” scheme went pretty smoothly, ultimately saving the program time and catching several pot­entially major hassles before they became irreversible. GM and other carmakers embarked on a rash of similar group projects in the wake of the Chevy/Lotus/MM experiment, but few of those turned out to run nearly as smoothly. 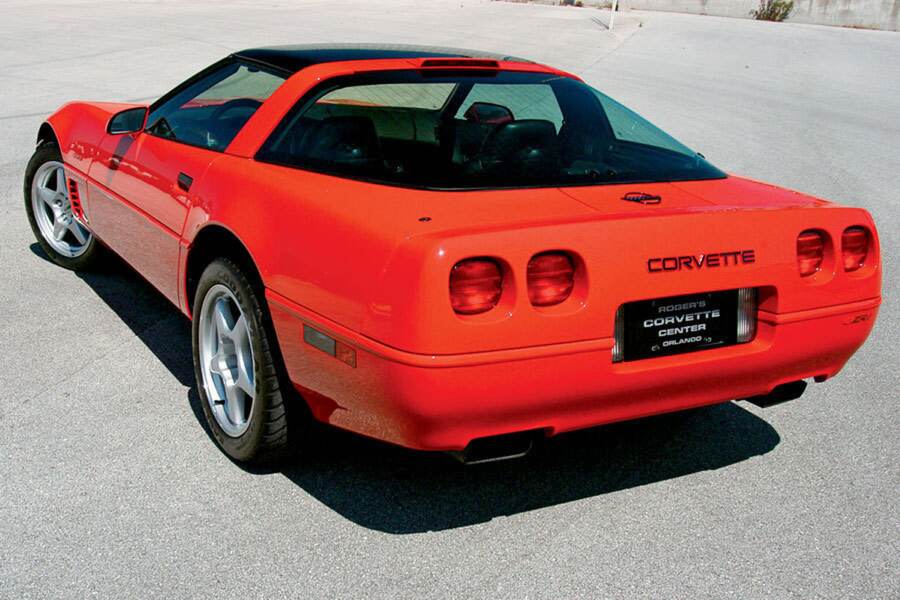 While engine development progressed the rest of the C4 had to be prepped to accept the new high-output V8, which had been designated LT5. Many of the pieces needed already existed, such as ZF’s six-speed manual gearbox and (with minor geometry changes) the current C4 suspension. The most obvious change was adding very wide rear tires, which McLellan hoped would give all the extra pow­er some prayer of reaching the ground. To cover this rubber, the bodywork was widened three inches at the rear via subtle swelling that began at the doors.

When the ZR1 debuted in the fall of 1989 the press couldn’t rave enough about its silky-smooth, tire-smoking LT5, which debuted with 130 more horses than the smallblock L98. Although the price of the ZR1 option was over $27,000 above and beyond the base Corvette, there was no question the result was a rival for superexotics costing three times as much.

Yet even as the accolades poured in, two groups of GM employees were doing a slow burn over the LT5/ZR1: smallblock-devoted engineers and dollar-obsessed beancounters. The latter were ticked because no matter how they sliced it, the LT5 was prohibitively costly. There was absolutely no way it could ever be widely affordable—and, as such, GM could never make it a viable long-term solution. That meant embarking on yet another new engine program, leaving the whole LT5 adventure one big financial black hole. 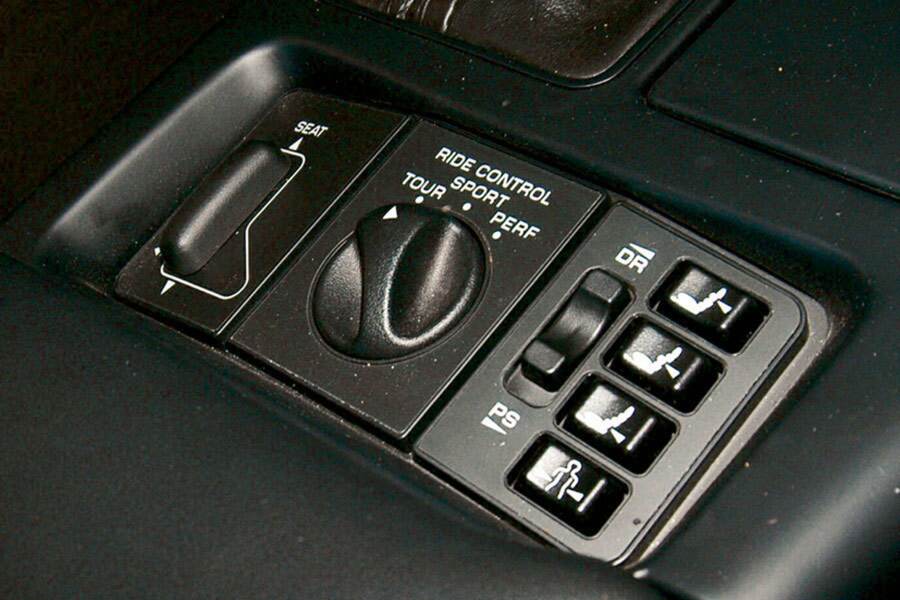 As for the former, Chevy’s venerable thinwall V8 had grown from 265 cid to over 400 with time, but in production form it had failed to kick out more than 250-odd net bhp—a lot less than many engineers felt was possible. Tired of watching from the sidelines, this camp set out to completely re-think GM’s traditional pushrod V8 (it was the first time anyone had seriously questioned its fundamentals since the early ’50s). The team saw that—glamorous or not—the bone-simple two-valve V8 offered big advantages in cost, weight, assembly time, packaging ease, and reliability potential. If LT5 levels of power could even be ap­proached with the simpler engine, it would be a huge coup for the whole Corv­ette program.

Spearheaded by Anil Kulkarni, this group tackled the most pressing of the old smallblock’s problems, namely spot cooling—the ability to maintain workable temperatures at key points around the combustion chambers. They realized that reversing the coolant flow would help lower piston and head temperatures, which in turn allowed them to release more energy with each revolution. That breakthrough, together with ongoing advances in fuel delivery, ignition, sensor technology, and valvetrain geometry, let the aging pushrod en­gine leap up to 300 horsepower, with more waiting in the wings. Further research indicated that redesigned heads, a beefed-up lower end, and improved fuel delivery could bring the figure to then-current LT5 levels. 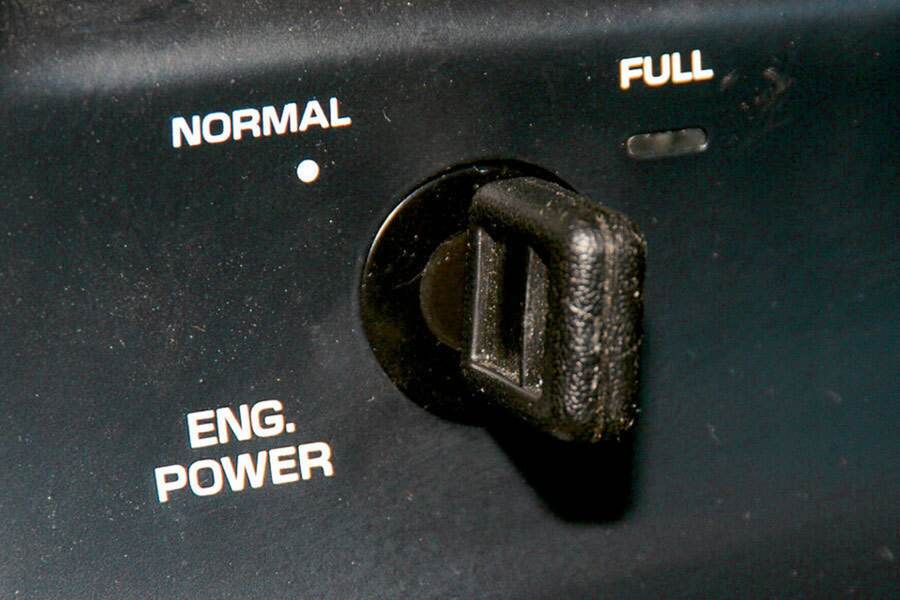 But it was the Gen-III V8—an all-new, all-aluminum, two-valve, pushrod design sharing the old smallblock’s basic layout but no common pieces—that fully doomed the LT5. By early ‘90 McLellan’s team was working on the next Corv­ette, and their initial plan called for an LT5-based four-cam making 450+ bhp. However, the all-alloy, pushrod Gen-III penciled out to be so much smaller, lighter, and cheaper that even the techies had to admit that the four-cam’s romance had been superceded by events on the ground. When faced with performance data showing a Gen-III-powered C5 could outrun an LT5-powered ZR1 at a fraction the cost, the question was settled.

That didn’t mean the ZR1 was a failure. Quite the opposite. As a marketing tool the exotic package put Chevrolet back on the supercar map, and as a driving ma­chine the turbine-like smoothness and sensual howl of the LT5 made a whole generation of writers and enthusiasts re-embrace the American sports car. Sales were respectable enough at the beginning as well, with 3049 examples sold in 1990, followed by 2044 in ‘91. But by the time the LT1 arrived for MY ’92, Chevy al­ready knew the ZR1’s days were numbered. Sales fell to just 502 units that year, the same season in which the upmarket model lost two of its most powerful angels—Lloyd Reuss was pushed out (along with CEO Bob Stempel) of the GM boardroom, while Dave Mc­Lellan went into retirement. 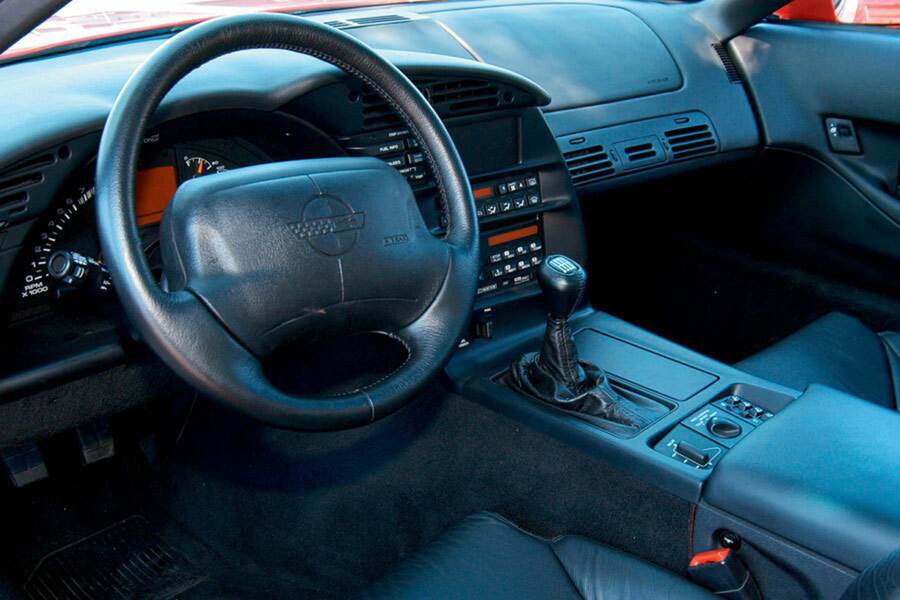 In November of ‘93, Mercury Marine was officially notified that the LT5 production line was to be shuttered. At that time Stillwater had assembled, sealed, and sent out 1350 still-unused en­gines, now rated at 405 bhp (thanks to small top- and bottom-end improvements). Spread out evenly, those engines plus a few others already in the pipeline meant Chevy could build just under 450 ZR1s each year for the next three years while still keeping a handful in reserve for warranty claims. In theory, that was enough to keep RPO ZR1 on the op­tion sheet through the end of the C4’s life.

What with one delay and another, the C5’s launch was held back until MY ‘97—but at this point, that day was still in the future. On this late-April afternoon in ’95, Dave McLellan was back in Bowling Green to share with Corvette fans the car that he felt was his crowning achievement. With the targa removed from the final ZR1, as he and Jim Perkins drove to the NCM, Dave Mc­Lellan, the Corv­ette’s “Quiet Genius,” smiled and waved for the crowd. 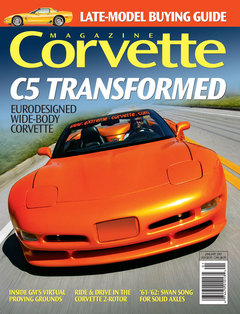