Designed for the Euro show circuit, Łukasz Janecki’s slammed C3 takes “stance” to the next level 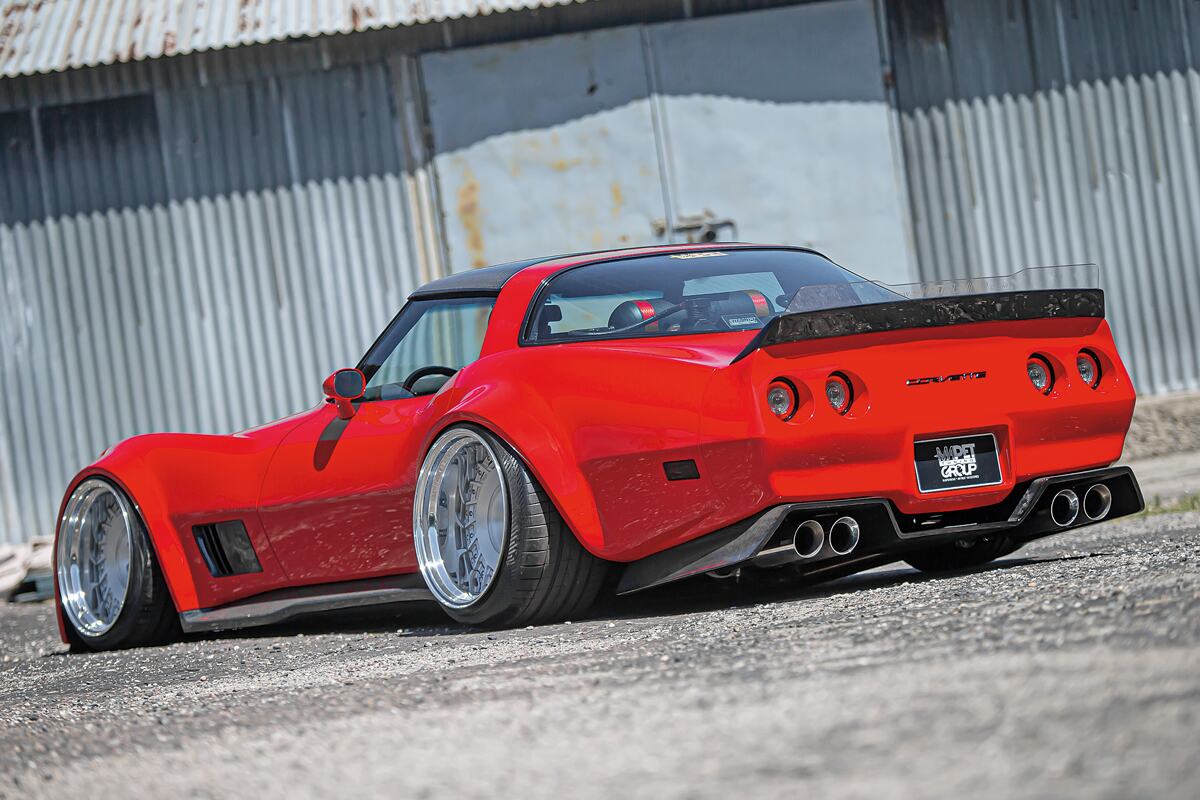 A bright-red C3 idling down the street would turn the heads of most auto enthusiasts, and one so slammed it scrapes the ground, its 5.7-liter V-8 bellowing through straight pipes, would be a jaw-dropping sight at any car show. But seeing such a vehicle crawl around a backwater village in eastern Poland is nothing short of sensational. We went to Pajęczno, which is as hard to pronounce as it is to find on a map, to see this special creation for ourselves.

Łukasz Janecki’s nickname translates as “Muppet,” which stems from his habit of doing daft things with cars usually thought of as being unsuitable for tuning. A case in point was his first foray into vehicular modification with an old Soviet-era Wartburg, onto which he grafted parts from a Ford Sierra Cosworth. But that was in a very different time, when Poland was only just awakening from long, dark decades of USSR-enforced economic suppression.

After the Berlin Wall fell and the nation slowly began to open up to the West, Janecki experimented with cars that had become easier to buy, working on VWs, Audis, and recently a Subaru. Having gained some local recognition, he began making money working on other people’s projects, but up until 2008 this was only a hobby. Finally, with enough customers, he made car tuning his career and embraced his nickname by calling his company Mapet Tuning. He hasn’t looked back since. 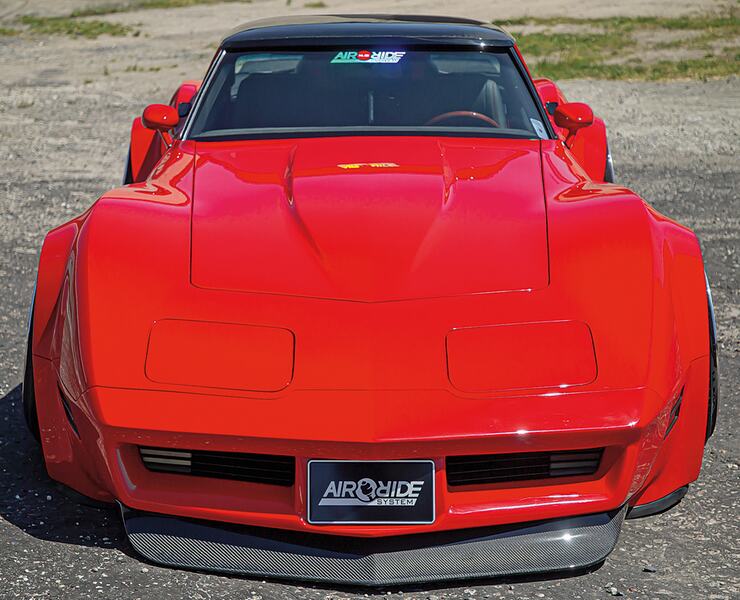 For car-customizing businesses, a show vehicle is an invaluable way to demonstrate the outer limits of its capabilities. And so once Janecki had exhausted his skills with VWs, he decided to take on a more demanding project and build a car that would stand out from the crowd. It took quite a while to select his template, as Fords didn’t really interest him, and Porsche build-ups are a zloty a dozen in his neck of the woods. But then he had the idea of doing something with a C3 Corvette, one of his childhood-favorite cars. An internet search brought up a suitable accident-damaged 1980 example with a sick engine and a very neglected interior, issues that cut its asking price to just $4,000. Unfortunately the car was on the wrong side of the planet, and shipping it to Europe effectively doubled its buy-in price.

Given the Corvette’s special nature (especially in Eastern Europe), Janecki wasn’t about to start randomly cutting up the car’s body panels. Before he ever plugged in the angle grinder, he spent a long time planning his approach. “On one [hand] I wanted to go a little extreme, as it’s my company’s demonstration car,” he explains. “On the other, it was very important to keep the classic look of the C3, so I needed to work out a good compromise.”

To help him get the look exactly right, Janecki approached someone to fine tune his rendering. Not just anyone, though, as he managed to get the famous British renderer Khyzyl Saleem to help. Saleem suggested a few subtle changes such as using a more subtle chin spoiler and softer wheel arches. From blank sheet to final design, the process took the best part of six months, during which Janecki and his crew started the practical work on the car. It was stripped down to its chassis, which was then sandblasted, and the engine was taken apart. From what they could tell, the previous owner had installed some internal parts incorrectly and damaged the 350 beyond repair. 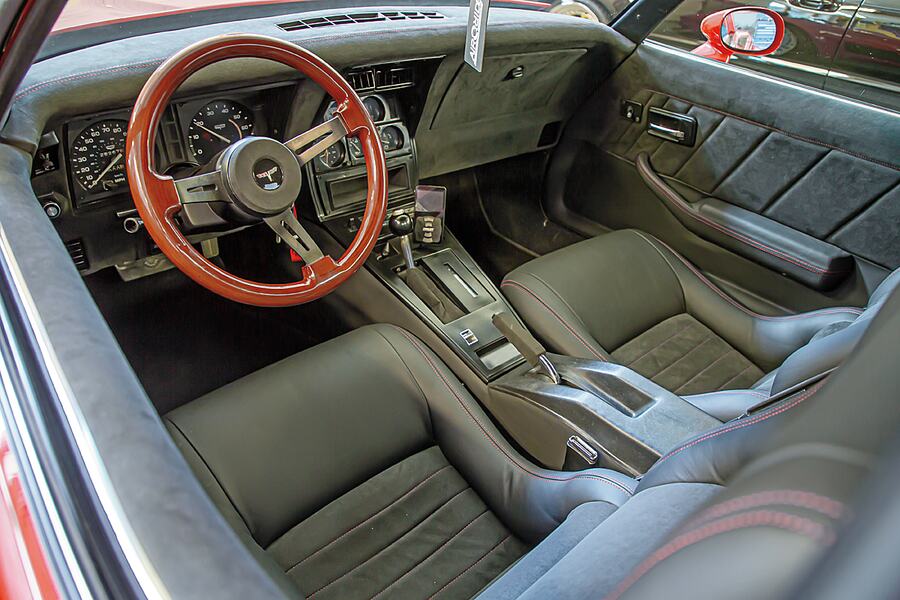 Fortunately they found a well-maintained L82 that had been removed from another C3 as part of an LS swap. And because the engine was local, Janecki didn’t have to fork over any exorbitant international shipping costs. Despite the rest of the car being heavily customised, the transplanted L82 is largely stock. Alterations include a heavy-duty timing chain, a relocated electric fan (it’s now in front of the radiator), a modified carburetor and intake manifold, and a slightly advanced camshaft.

Wheels are a big part of any “stanced” build, and Janecki’s C3 is no exception. In this case the rims are built to his specs—19-inch Rotiform 14Js on the rear and 11Js on the front. They feature 7- and 6-inch lips, respectively, as wide as the company could make them. If the setup looks unusual, it’s because the wheels are unique to the car—literal one-offs.

Once the final design for the body was settled on, Janecki sent the car and his detailed measurements to his friend’s fiberglass-molding company, Spojkar. The firm usually makes truck cabs, so it had a 3D laser big enough to make an image of the car and create the first molds for the flared arches. It took a while to get the wheel-arch spacing exactly right, but repeatedly modifying the molds to dial in the desired results was well worth the extra effort. 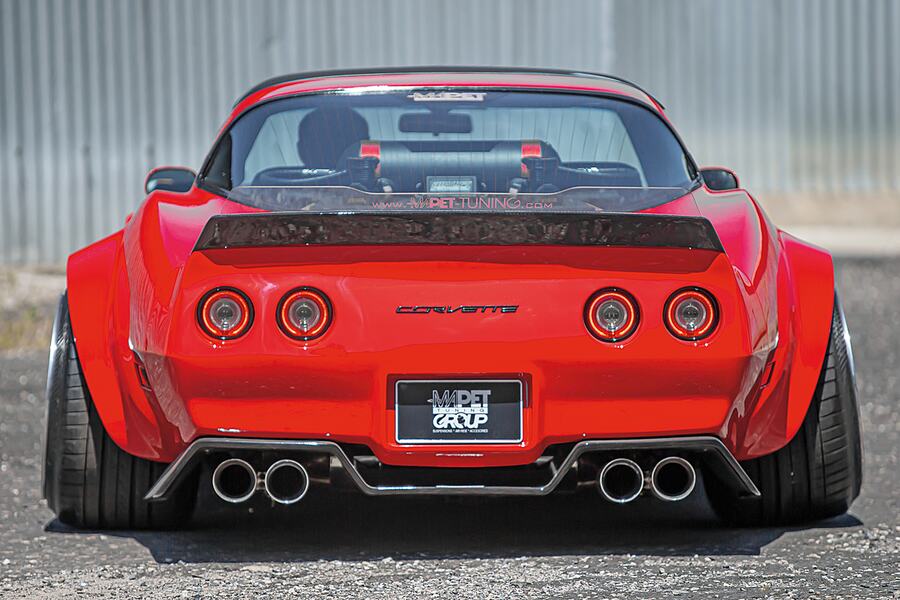 As part of the his modernization plan, Janecki wanted to incorporate carbon-fiber elements into the build. The high-tech material was used for the roof—to make it look like a targa—front chin spoiler, side skirt extensions, and rear ducktail spoiler. (Note that the latter item has a piece of Plexiglas protruding from the top that also functions as a brake light.) The unfinished carbon provides a nice contrast to the scorching-red paint without detracting from the car’s classic looks.

Installing the car’s air-ride suspension proved to be the most complicated part of the conversion. Most modern cars have coil-over suspension, where each shock absorber is located inside a spring, making it a simple job to install the requisite airbags. The C3, however, has A-arms on the front and leaf springs on the rear, neither of which is particularly conducive to fitting airbags.

To address this, Janecki cut off most of the front lower arms and fabricated a set of Macpherson struts using MTS Technik coil-over shocks designed for the VW Transporter minivan. At the rear the leaf springs were replaced with bespoke trailing arms, onto which the bags were mounted. MTS made custom shocks for the rear, while Viair air compressors are mounted on the rear shelf, visible through the rear window. 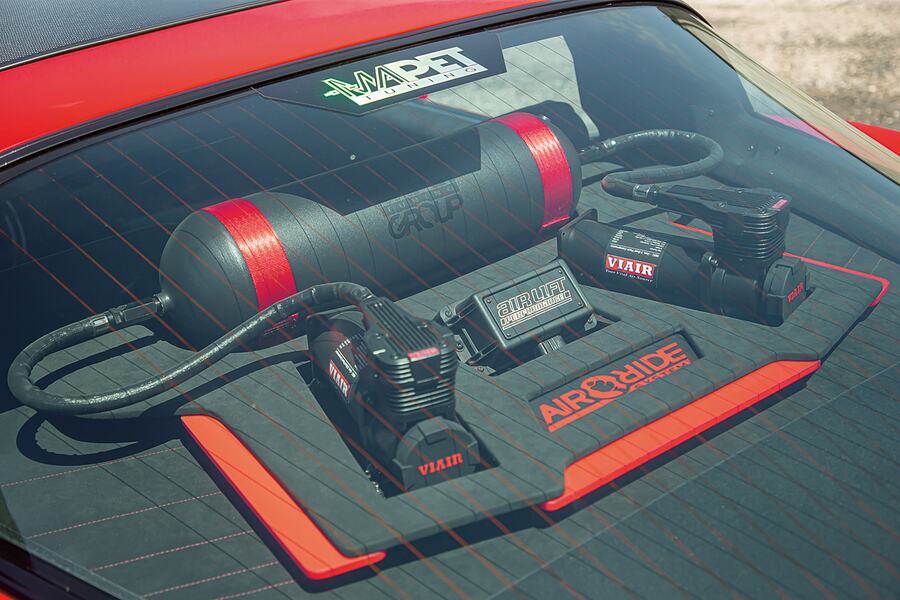 “It took a lot longer to build than a ‘normal’ car,” Janecki shrugs. “Every time we needed a little spare part that we couldn’t find in Europe, we had to order it from America, and it always took ages. Sometimes six weeks.”

The interior needed a lot of work as well. The original was in poor condition and full of white leather and plastic parts that weren’t to Janecki’s taste. He ordered new carpets and a wood steering wheel from the U.S. and had the rest of the work done by a local company called Carissmo Design (not to be confused with Carismo Design of New York, which makes custom steering wheels.) Using liberal amounts of black leather and Alcantara, Carissmo decked out the seats, door panels, center panel, dashboard, and custom shelf for the air compressors All the lights are custom-made LEDs.

The extra time and effort the Corvette required has thus far been well worth it. The car was finished a week before its first show, Poland’s prestigious Ultrace, where it won the Best of Show award. It has picked up plenty of other hardware in the months since, including a bronze medal at Bodensea, and it was one of the picks of the show in the huge Prague Car Festival in the Czech Republic. 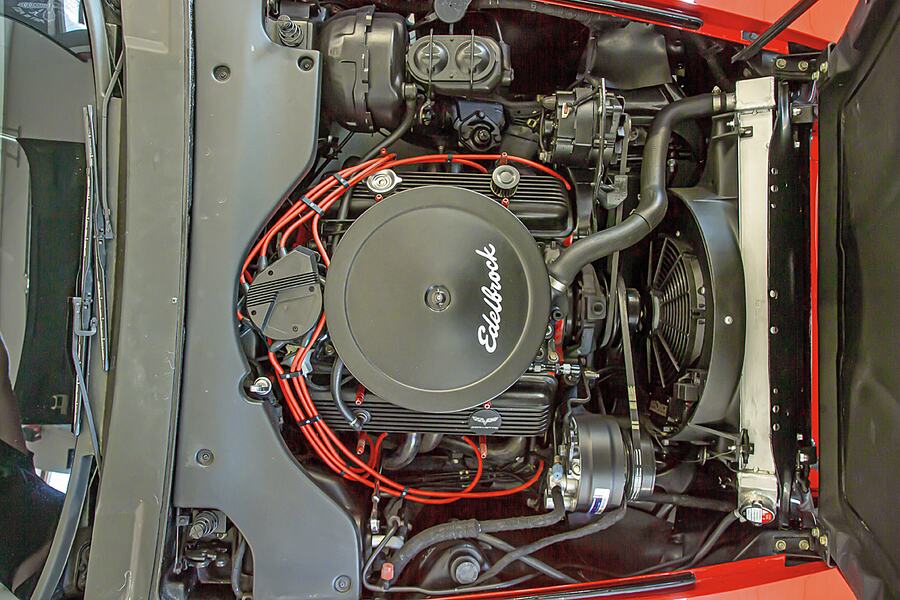 But such shows are all about what cars look like. We wanted to know what this special C3 drives like. Though the engine remains largely factory-issue, it generated a surprisingly aggressive roar when Janecki cranked it. Thanks to a set of custom, straight-through exhaust pipes made by SSG Performance, it’s more NASCAR than show car. Growling, protesting a little, it slinked out of the workshop with the presence of a hungry apex predator. I understood then what the car show judges must have thought as they instantly forgot all the other boring builds on display.

We didn’t get too far before encountering the first issue, though. Despite being built here, the car had never been driven around Pajęczno, and the speed bump just outside the workshop almost turned into an insurmountable obstacle. Airbags pumped up to maximum extension, it was still a nervous moment as Janecki nudged the low lip perilously closer. It passed with just a fraction of an inch to spare.

A little way out of town Janecki let me take the wheel. Putting my foot down instantly rewarded me with the roar of that big, unmuffled V-8, but there’s no way anyone will be chucking this car around on Polish byways. Thanks to the huge tires and lifted suspension, the steering felt very vague, even on a billiard-table-smooth stretch of new pavement we found. Eastern Poland is notorious for its poor roads, and when the fresh asphalt ran out, the C3 really made its displeasure known. 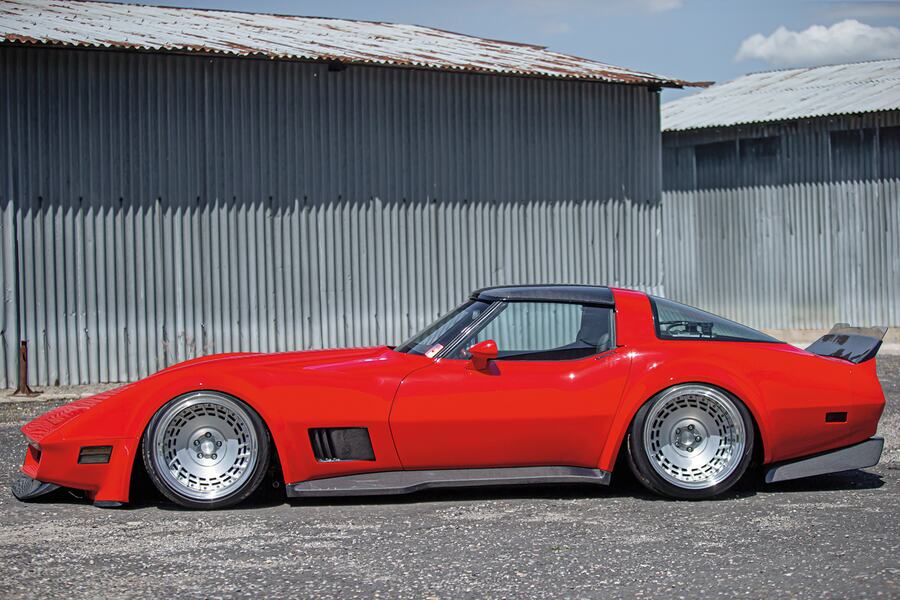 Janecki observed that the pothole-strewn tarmac was more suitable for a 4×4. He wasn’t joking. For such a low car the road had turned into a veritable minefield, as 4-inch-deep holes could easily rip pieces of bodywork off of a car with less than an inch of clearance. Then again, this C3 doesn’t have to be practical. It’s unapologetically a show car and built specifically for that purpose. It will surely be bringing a lot more trophies for the display cabinet. Not bad for a Muppet. 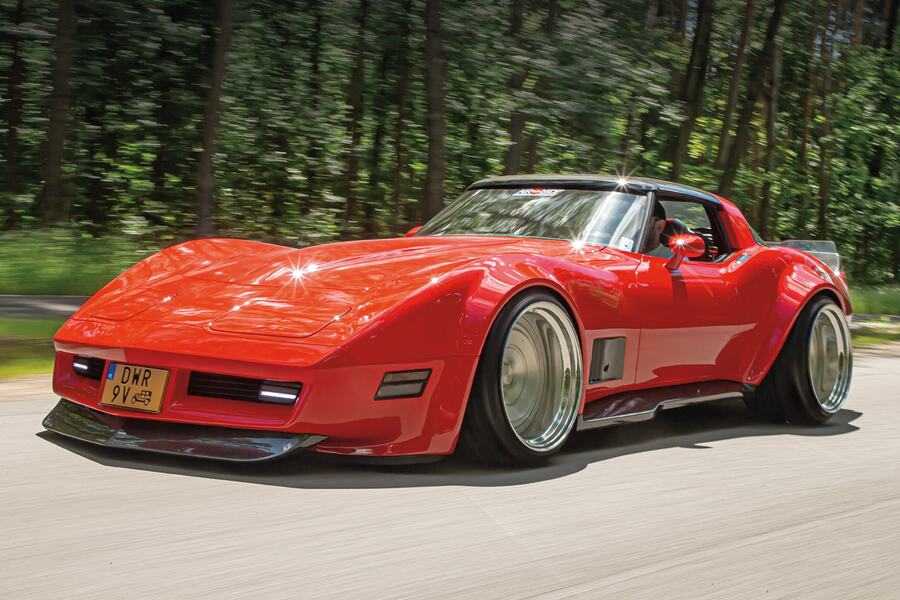 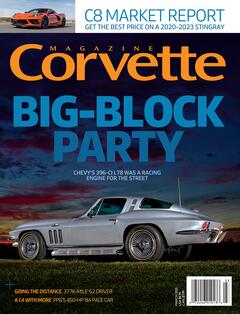