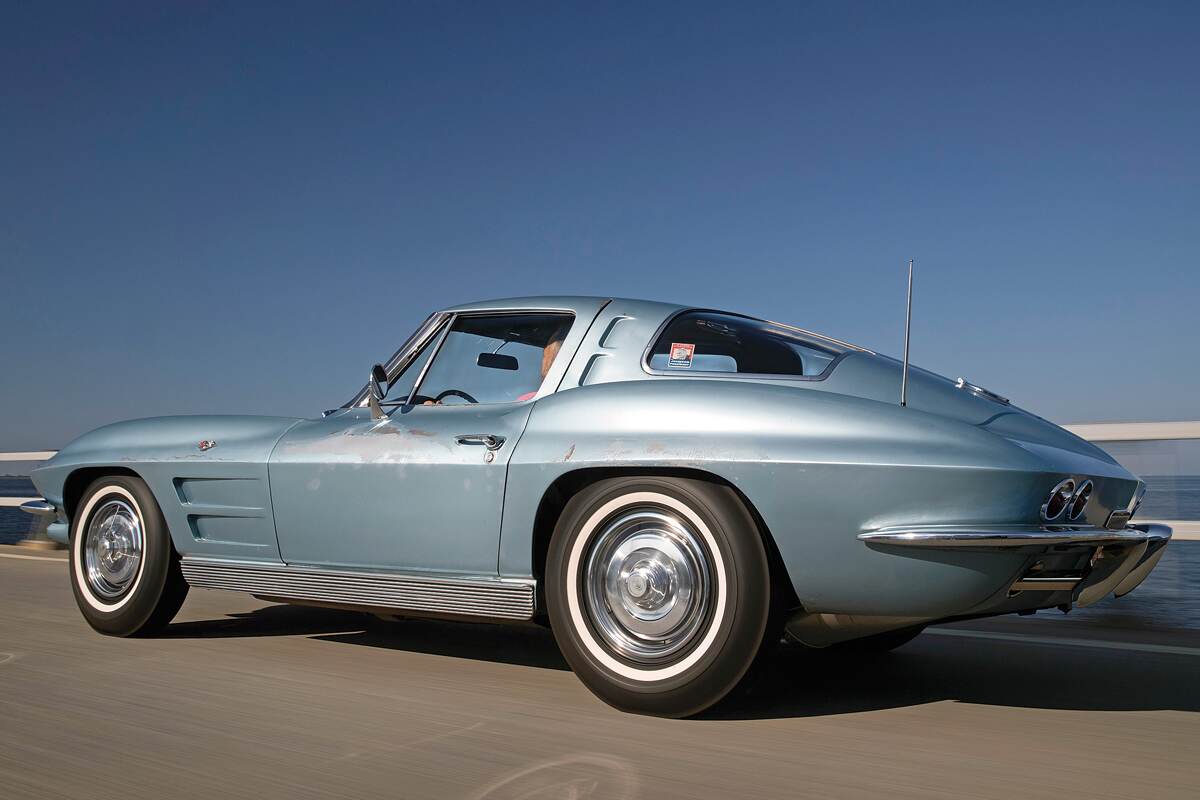 Every vintage Corvette has a story to tell, but some are far more interesting than others. This 1963 coupe’s odyssey began on July 11 of that year, when it rolled out of Chevrolet’s sprawling assembly complex at 3801 Natural Bridge Avenue in St. Louis. There was nothing remarkable about the car itself—power came from the base 327/250-horse engine coupled with a wide-ratio four-speed transmission and an open, 3.36:1-ratio differential. The only options installed, in addition to the M20 gearbox, were an AM/FM radio and whitewall tires.

There was, however, something very unusual about the man who bought the car from Lustine Chevrolet, a dealership located in the Washington, D.C. suburb of Hyattsville, Maryland. Richard F. Burke was employed by the Central Intelligence Agency, and his work, which remains shrouded in secrecy to this day, took him all over the world. As a result Burke’s Corvette was rarely driven while he owned it, instead remaining in storage most of the time inside his parents’ garage on Pennsylvania Street in Hyattsville.

While overseas late in 1966, Burke saw—and oddly enough, fell in love with—a Saab 96, the Swedish company’s quirky, two-door sedan that was manufactured from 1960 through 1980. Though very few clear-thinking individuals could possibly have preferred the Saab’s odd styling and 72-horse three-cylinder to the iconic “Split-Window” ’63 Corvette and its brawny V-8, Burke pulled the trigger and bought himself one. 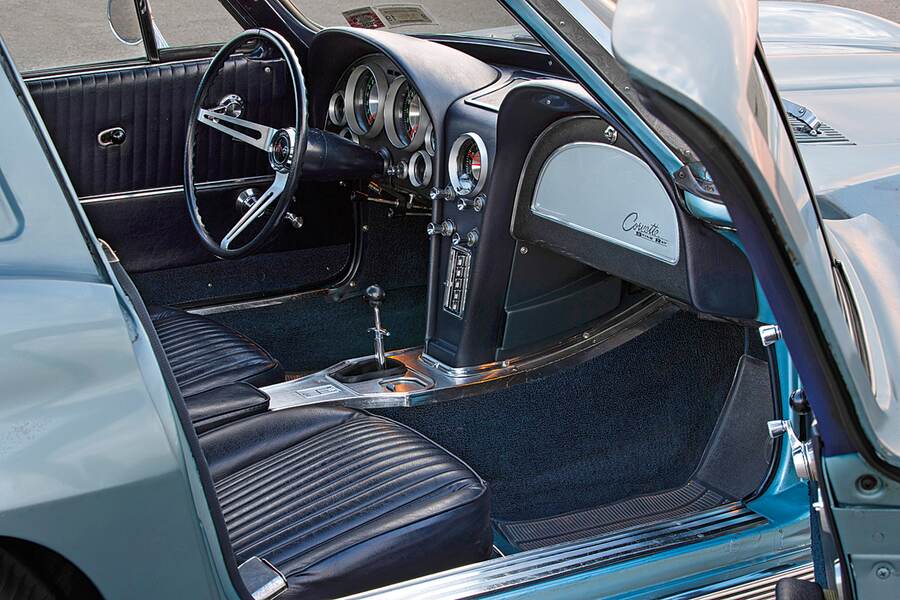 Richard’s brother Robert, who was also a CIA officer, jumped at the chance to buy the Corvette, which at the time was still in virtually new condition. He paid Richard $4,000 for the car, which originally came with an MSRP of $4,651.20. Within three years of selling the Vette, Richard Burke became very ill, reportedly as a result of being poisoned while in Southeast Asia. Shortly after returning to the United States, he died.

Over the ensuing decades Robert Burke drove the Corvette very sparingly, using it for pleasure exclusively while retaining a sequence of more mundane cars, starting with a 1956 Pontiac, for daily transportation. The Corvette always went back to Lustine Chevrolet for routine service and any needed repairs, and Burke was very careful to preserve its originality to the extent feasible. As he aged, Burke drove the car less and less, adding only about 6,000 of its 41,000 total miles between 1970 and 2016, when he passed away at the age of 89.

According to family members, Burke intended to leave his beloved Corvette to a favorite nephew who had shown great interest in it, but after his passing no will could be found. Absent that, his entire estate, including his Silver Blue Split-Window, went to numerous heirs, and to achieve a statutorily mandated equitable distribution, the estate had to sell the car. 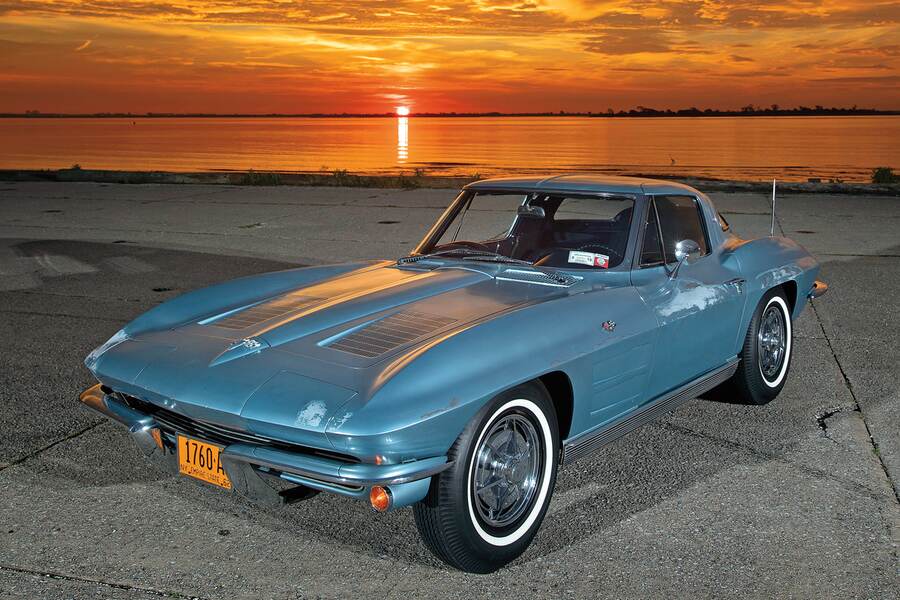 Meanwhile, exactly 222 miles north of the garage at 3411 Pennsylvania Street where the car had lived its entire life, well-known Corvette restorer Chris Tucci and his business partner Quentin Carbone were displaying several beautifully revitalized old Vettes at the New York Auto Show. Toward the end of the show, two middle-aged couples approached the restoration duo. After asking some questions, one of the women revealed that her uncle had passed away in Maryland and that his old Corvette would have to be sold at some point in the future. The couple did not know much about the car, but the woman did mention that there was something special about its rear window, which of course got Tucci and Carbone’s attention. They exchanged phone numbers and promised to stay in touch.

Tucci and Carbone checked in with the woman regularly over the following year, but because the probate process was not completed, the car couldn’t be sold. Then, on June 19, 2017, the call the pair had been waiting for finally came. Owing to the level of interest in the Corvette among others, they had to move quickly. Together with Chris’ cousin Joe Cantalino, who was brought in as a third partner in the purchase, the men flew to D.C. and met the cousin handling the sale on behalf of the estate.

After a somewhat lengthy search for the keys to the garage and car, they raised the door and finally saw the Corvette they had been chasing over the previous year. It was dirty and sad looking, with flaking paint, flat-spotted tires, and cobwebs stretching from various points on the chassis down to the floor. But at the same time it was exactly what every vintage-Corvette enthusiast dreams of finding. 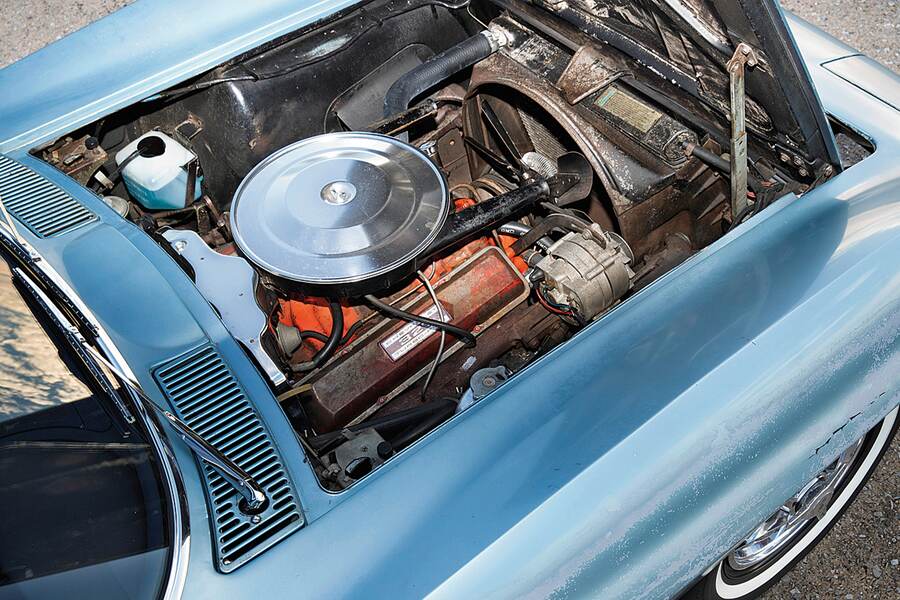 “One look and I immediately fell in love with the car,” recounts Cantalino. “My Uncle John—Chris’ father—bought a red Split-Window Coupe brand new when I was only two years old, and today Chris still has it. Our families lived next to each other in a two-family home in Brooklyn, and I grew up with that car.

“Uncle John would take me, my brother Tony, and my cousin Elisa for rides, and we would fight to sit in the back under the split rear window, looking ahead to the aircraft-like gauges. This was burned into my mind growing up and made me always want a ’63 of my own to enjoy.”

Though the Burke car potentially furnished Cantalino with an incredibly original ’63 coupe that was available to buy, there were two big hurdles to overcome. The first was that the car needed to be painted. But while it would have been a simple matter for Tucci to re-spray it in its original color, the restorer recommended a different approach. 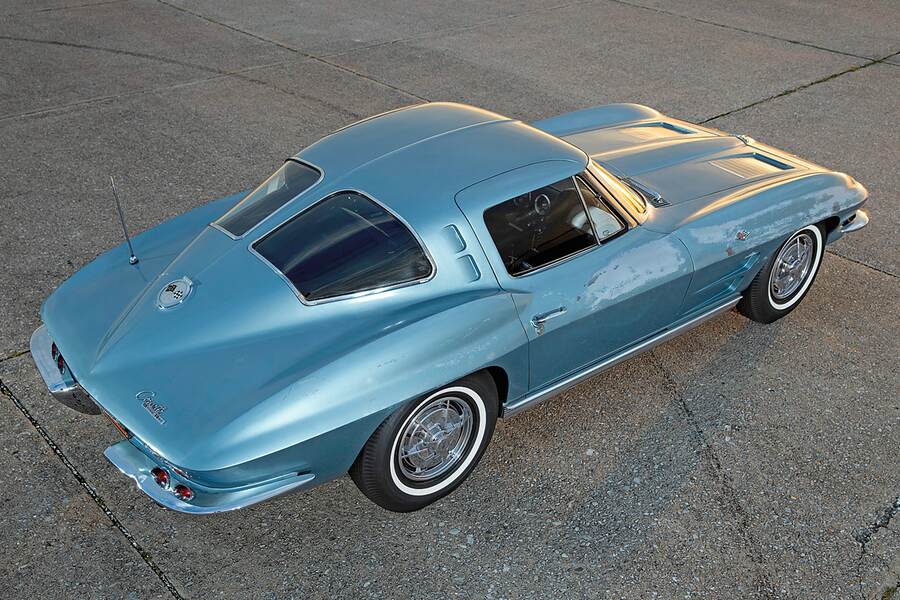 “He responded that the paint wasn’t a problem in spite of its rough condition because it was original, and as a genuine ‘survivor,’ it should never be repainted,” Cantalino says. “I understood that, but there was still another problem, which was that I didn’t want to resell the car as we originally planned. I wanted to keep it, [so I] offered my partners compensation.”

The pair agreed, and Cantalino offered to pay the estate’s asking price. “I wire-transferred the money immediately, and my wife Carmela called, asking why I was paying the entire amount when I had two partners,” he says. “I explained that having partners can be problematic, [but] now I owned the investment outright and controlled its destiny. Being an intelligent investor, she understood and agreed.”

After getting home, Cantalino arranged to have the car shipped directly to Tucci’s restoration shop on Cortland Street in Lindenhurst, New York. Though he intended to heed his cousin’s sage advice and preserve the car’s remarkable originality, it did need a fair amount of work after sitting with little-to-no use for many years. 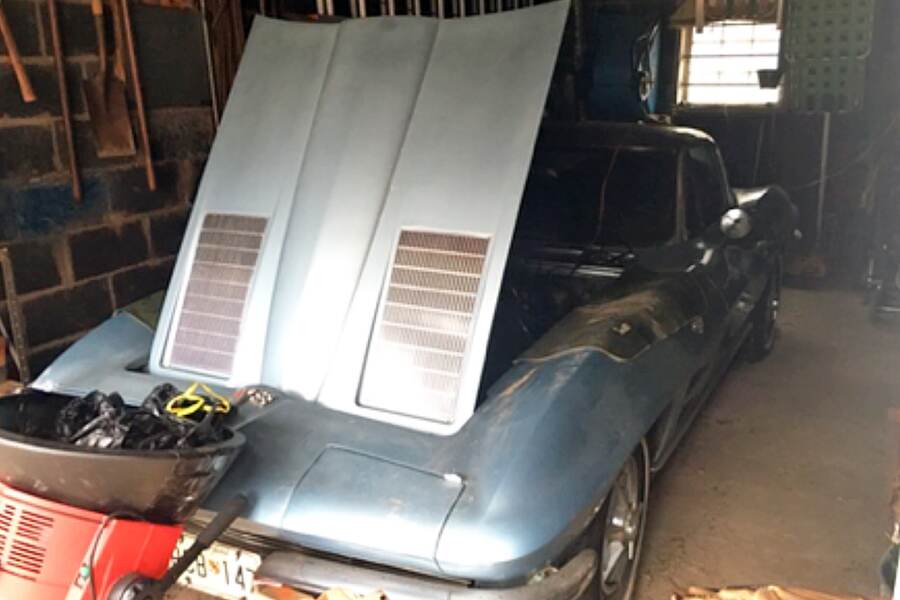 New reproduction whitewall tires replaced the decades-old rubber that was on the car; the cooling system was drained, flushed, and refilled; and the engine, transmission, and differential oils were changed. With Tucci’s expert guidance, Cantalino restored the fuel and brake systems, rebuilding and retaining nearly all of the original components, including even the rubber brake hoses, which miraculously remained in good condition. Cantalino also went through the clock and all of the gauges to ensure they functioned accurately while still retaining their original appearance. After all the work was completed, the Corvette was back on the road, running and driving like a well-preserved 1963 should.

Cantalino also did the best that he could with the car’s cosmetics. Time was not kind to the lacquer paint applied in St. Louis, but he improved it by carefully cleaning every inch and applying high-quality wax to help rejuvenate and preserve what remains. He also gave the completely original interior, which remains in excellent condition, a deep cleaning.

After getting the car fully functional and looking good again, there was one more problem to address. “The original selling dealer undercoated the car,” reveals Cantalino. “That was a pretty common thing for dealers to do back in those days, especially on the East Coast where roads are salted in the winter. It’s ironic that this car got undercoated even though it was never driven in bad weather, and it turned out to be both a nightmare and a blessing for me. The nightmare was that carefully removing all of the undercoating was a filthy, time-consuming job, but the blessing was that it had preserved the chassis and suspension in like-new condition.

“The year I spent working on the car with Chris in his shop was a great bonding time for us,” he continues. “We spoke often about Chris’ dad, my Uncle John, who owned his beloved, 340-horsepower Split-Window until he passed away. He was a very kind man, and it was wonderful growing up with him. We all owe our love of cars in general, and Corvettes in particular, to Uncle John.”

Since the rehabilitation of Cantalino’s ’63 coupe was completed, he has shared this beautiful original with others at local and national shows, where it has accumulated many accolades. These include a National Corvette Restorers Society (NCRS) Top Flight, Bloomington Gold Survivor, Muscle Car & Corvette Nationals Triple Diamond Certification, Americana Concours Best Preservation, and Coney Island Mermaid Parade Best Original Car award. He’s also gotten a great deal of pleasure from driving the car, adding nearly 2,000 miles to it over the past four years. 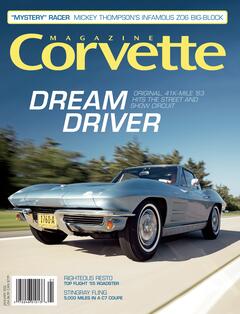