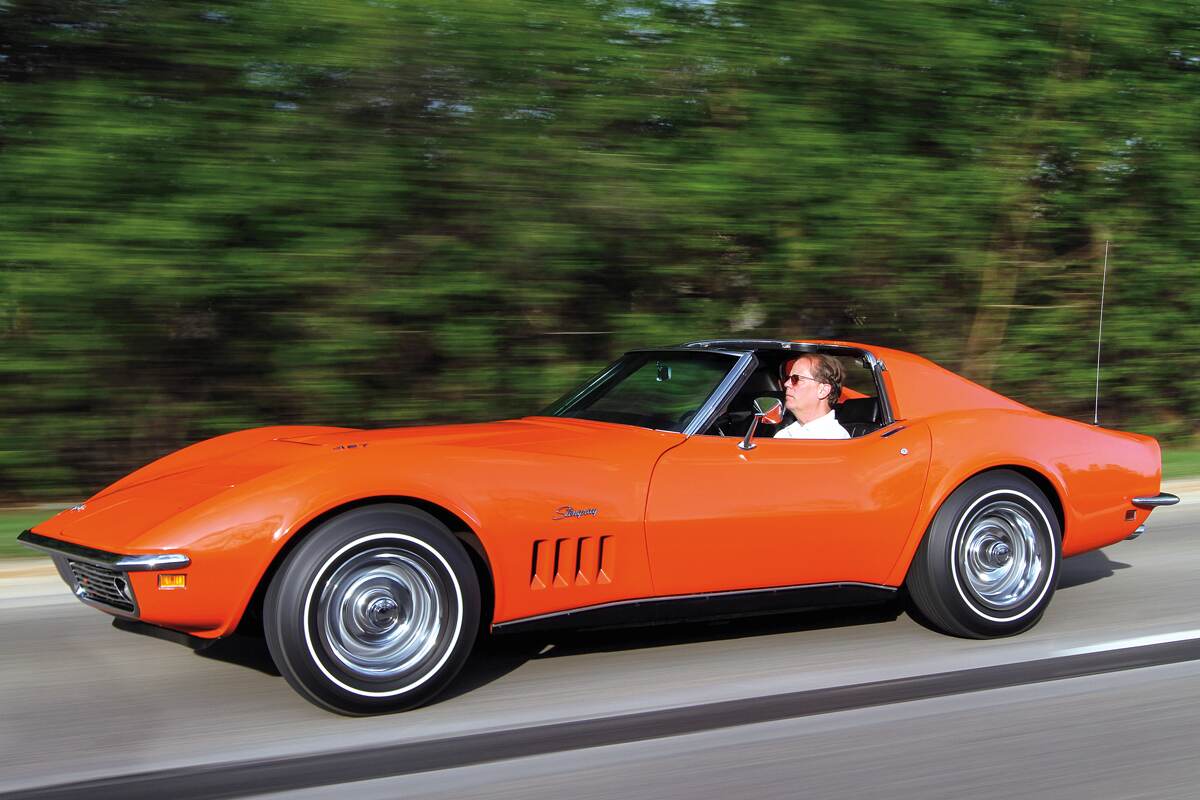 The insidious irony with classic Corvettes is that, for all their sensuous, fiberglass-formed curves, they can rust.

They rust in the “birdcage” structure around the passenger compartment, particularly in the windshield posts, and they rust in all of the other underlying structural elements that are hidden by the corrosion-free composite body. Consequently, the need for repairs only tends to surface once the rot has become serious enough to visibly affect the paint finish or body-panel fitment.

One of those nasty, hidden components on C3 models is the reinforcing header panel in the nose that supports the headlamp assemblies. When oxidation there becomes severe, the headlamp doors can sink or shift in their body openings. But the issue doesn’t even have to be that bad to cause appearance problems. Even comparatively mild corrosion is enough to swell the underlying steel and cause unsightly “pops” in the nose.

A car doesn’t even need to be a four-season refugee from the Rust Belt to suffer from this malady, as even the water from washing can find its way below the surface to trigger the corrosion process. In other words, you can’t win for losing. 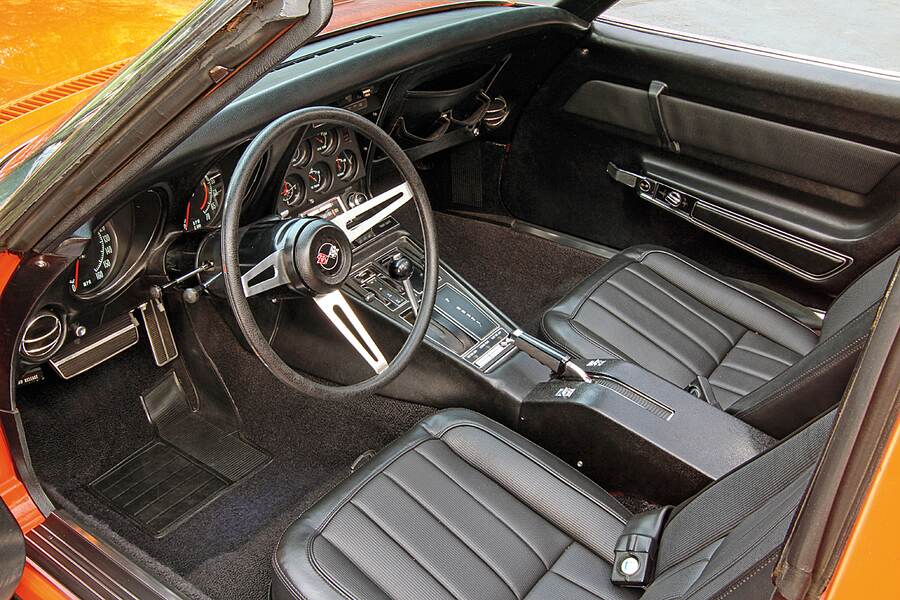 That’s what makes John Nikolas’ Monaco Orange 1969 427 coupe comparatively rare. The paint looks fresh—maybe not spray-booth-fresh, but good enough to prompt questions about when it was re-sprayed and who did the work—but it’s the original lacquer. Seriously.

A close-up examination reveals a few inevitable cracks and very minor, spotty crazing here and there, but considering the paintwork’s age, as well as the factory lacquer’s propensity for losing its luster after only a few years in the sun, the finish is deep and flat enough to trigger reflexive Are you sure? reactions on most faces.

The telltale would surely be the presence of headlamp header-panel pops in the nose. Seeing those would lend credence to the original-paint claim, but there are none. The same for the rear-fender bonding-strip “witness lines” that typically show through on original-paint cars. Again, nothing.

“It’s remarkable how well the paint has held up over 52 years,” says Nikolas. “It’s the thing that drew me to the car in the first place.” 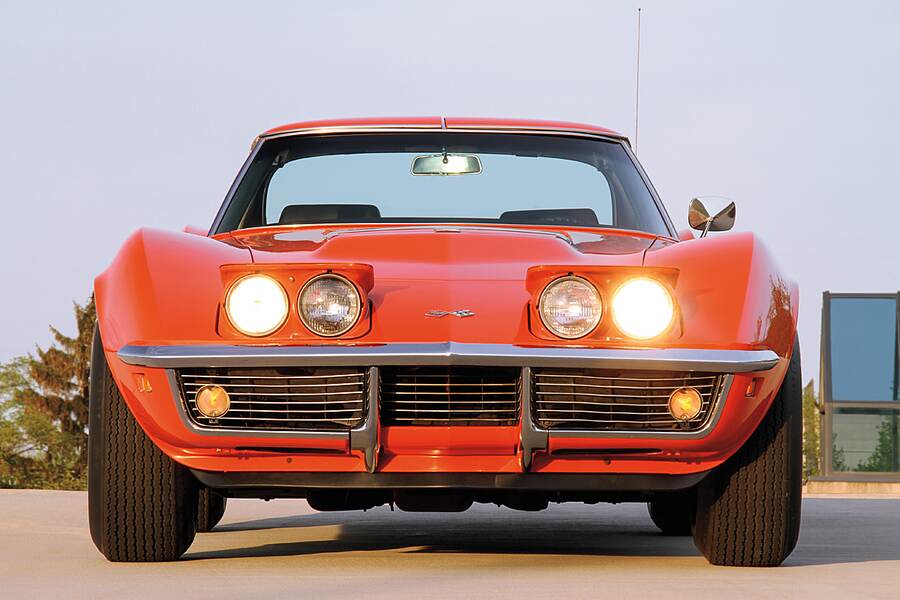 Nikolas, who is the Corvette’s third owner, believes that its stunning original paintwork is largely attributable to the two previous owners, who kept the car off the road during winter and other inclement weather. But it was the second owner who elevated the preservation regime through one novel practice: He didn’t wash the car. Ever.

“As far as I know, the car has gone about 25 years without a wash—and maybe even longer,” says Nikolas. “It was garaged, and wiped down as necessary, but it was not washed, which prevented water [from] seeping under the nose and rusting out that reinforcement panel.”

Some might debate the validity of the hypothesis, but the smooth, lustrous evidence in Monaco Orange seems to support it. At the very least, it’s hard to argue with the claim.

According to Nikolas, the car was purchased directly through General Motors in March 1969, likely by a GM employee. He owned it until 1997, when the second owner, who lived in the same neighborhood, acquired it. He drove the car sparingly, never washing it, for the next 24 years before Nikolas purchased it. 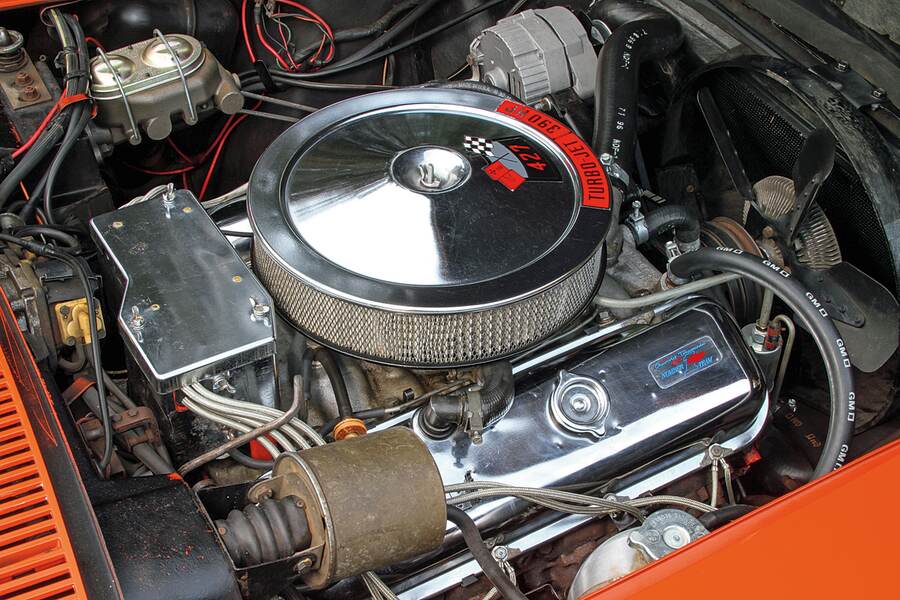 “The combination of the color and 427 were impossible to resist,” says Nikolas. “But the incredible original paintwork pushed it over the top. It’s stunning.”

Indeed, it is. Even after Nikolas points out the handful of minor cracks in the paint, the overall effect remains impressive.

For those working on their C3 identification skills, the appearance of the 1969 models differs from that of their ’68 counterparts in a few subtle ways. First and foremost is the addition of the “Stingray” script badges on the front fenders, while the ’69 models also eliminated the combination door lock/release button, changing the release to the chrome handle on top of the door, which served only as a pull on 1968 models. And around back, the ’69 models have their backup lights incorporated into the round taillights, while the ’68s had separate, rectangular backup lamps in the valance below the bumpers.

Under the hood is the L36-code 427 engine, backed by a pretty rare (in this configuration) Turbo-400 three-speed automatic transmission. Drawing its breath through a Quadrajet carburetor mounted on a Winters-cast aluminum intake manifold, the L36 was the bread-and-butter big-block of the lineup. More than 10,000 of the 38,762 Corvettes built in 1969 were equipped with it—more than 27 percent of the production run. In fact, more cars were equipped with the L36 in ’69 than they were with power windows. 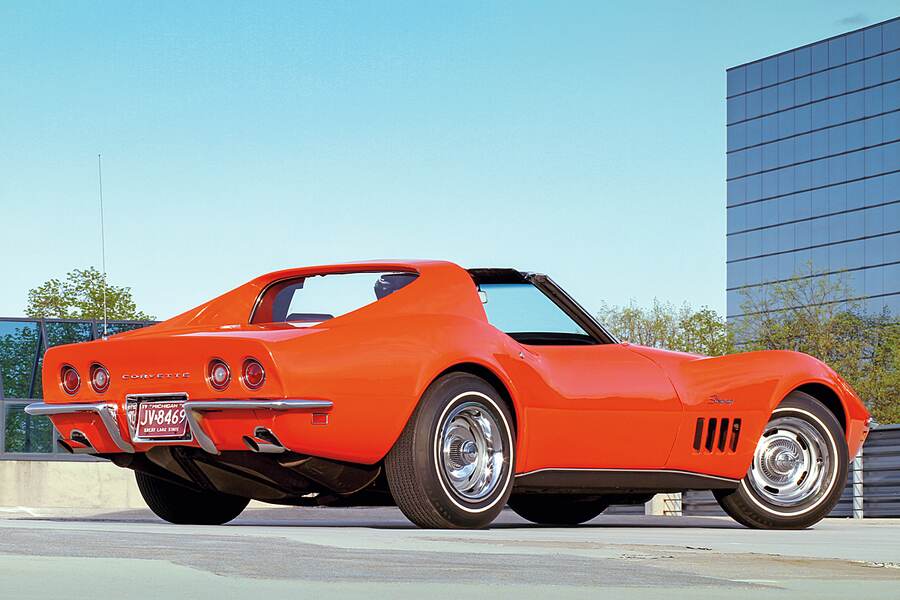 According to Nikolas, the engine has never been removed from the car and has seen only routine maintenance over the years, along with a fresh valve-cover gasket or two. For a while, the original owner ran it with a Holley carb in place of the Q-jet, but the second owner had that original spread-bore Rochester—part number 7029204 for an auto-trans car—restored and reinstalled.

“The Holley carb came with the car when I purchased it, and others have suggested putting it back on for better performance,” says Nikolas, “but with the originality of the car, I prefer to run the Quadrajet. It runs just fine.”

While the L36 engine wasn’t particularly rare for 1969, pairing it with an automatic transmission certainly was. Of those more than 38,000 Corvettes built for the model year, only 8,161 were ordered with the Turbo-400 three-speed. That’s around 21 percent of the production run, but most were matched with the small-block engines. Most owners opted for a four-speed with their big-block, presumably for that pairing’s perceived accelerative advantage.

Nikolas reports that the powertrain combo pulls hard, and the original, untouched Turbo-400 still shifts well after 52 years. Of course, the brakes required some maintenance over the decades, but they’ve been maintained in stock specifications. An incorrect master cylinder was installed about eight years ago during the last major brake work, but Nikolas has the original and is having it rebuilt and reinstalled on the car. (We only mention it to save eagle-eyed readers the time of composing and sending in a note about this otherwise very original car.) 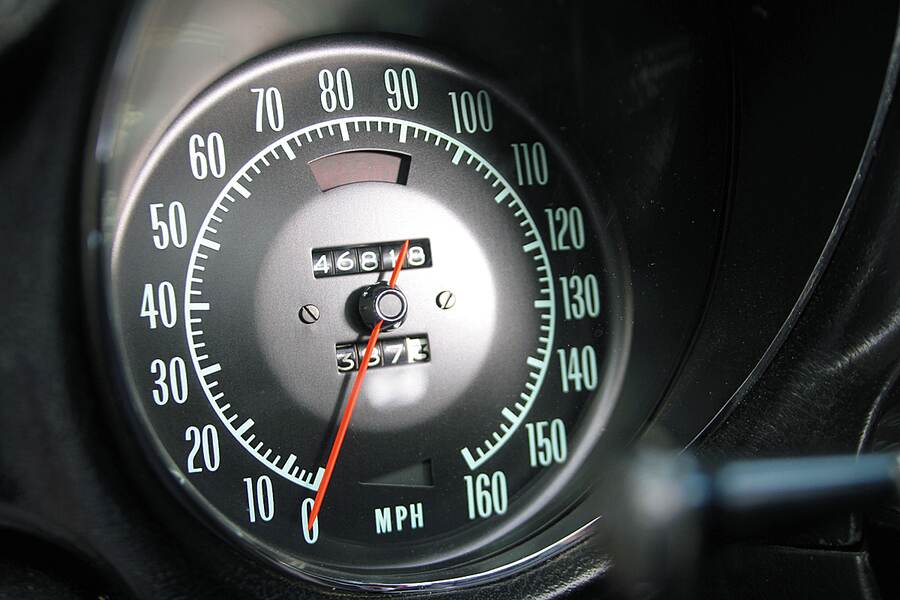 However, Nikolas has replaced the tires with period-correct reproduction F70-15 Goodyear Speedway wide-tread rubber from Kelsey Tire. The tire design is a non-belted bias configuration that Goodyear developed reportedly in response to counter wonky handling attributes discovered on C3 test mules using belted bias-plies. It was an unexpected discovery, as the C2 and C3 models shared the same chassis design, but the C3 incorporated changes that included a wider, 15×7-inch wheel in 1968 and an even fatter 15×8-inch rim for 1969. The non-belted design apparently did the trick, curing the stability issues.

Nikolas reports that the car handles admirably well with the non-belted repro tires, although keeping them glued to the pavement between stoplights is nonetheless a challenge, as the 427’s torque easily overpowers the old-school rubber.

“There’s a lot of pull with that big-block, no question about it,” says Nikolas. “It doesn’t take much at all to make those Goodyear Speedways lose their grip.”

Inside, the Corvette’s cabin is original, apart from Al Knoch–supplied reproduction seat covers in place of originals that were split. Everything else, from the carpet and door panels to the steering wheel (a 17-inch design that was new for ’69), gauges, and optional AM/FM radio (a hefty $172 upgrade at the time) is just as the car rolled off the St. Louis assembly line. 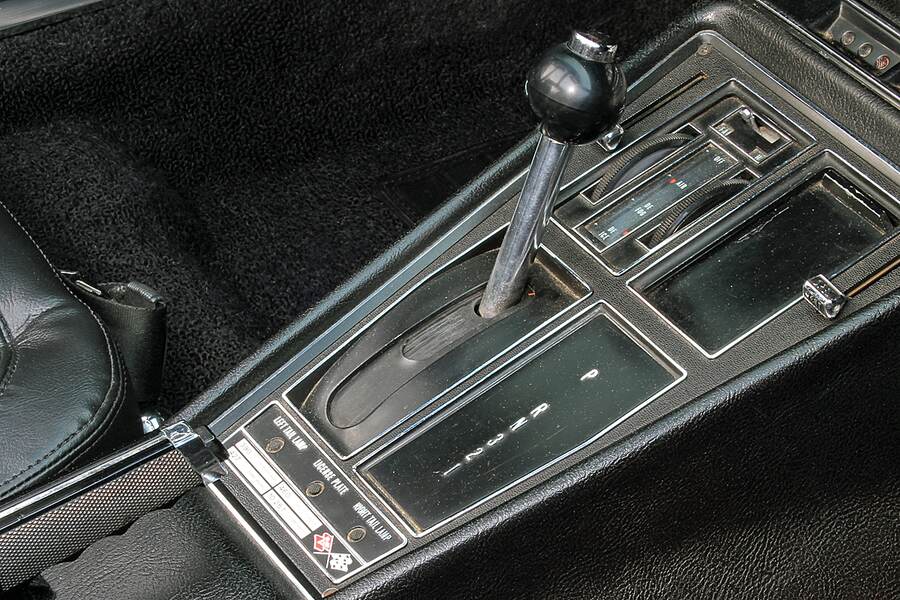 “It’s like a time machine,” says Nikolas. “The sound, the feel, and even the smell. It’s amazing.”

As with the exterior, there were a number of subtle, but distinctive, model-year changes for the ’69 Corvette’s interior. Among them was a redesign of the door panels to increase passenger comfort, the relocation of the ignition switch to the steering column, and the addition of the specifications plaque at the rear of the center console. The latter item called out the engine’s size and compression ratio, as well as its factory horsepower and torque ratings.

With more changes arriving for 1970, it all adds up to the ’69 Corvette being one of the most distinctive cars of the long-running C3 generation. That this L36-powered example has survived more than half a century with its rare and original Monaco Orange paint appearing almost showroom-fresh makes it all the more noteworthy.

It all begs a cringe-worthy dad joke: Knock-knock. Who’s there? Orange. Orange who? Orange you glad nobody washed this Corvette?

Yes. Just don’t ask why a bicycle can’t stand up on its own. 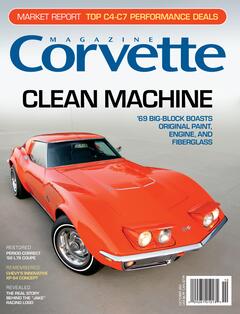