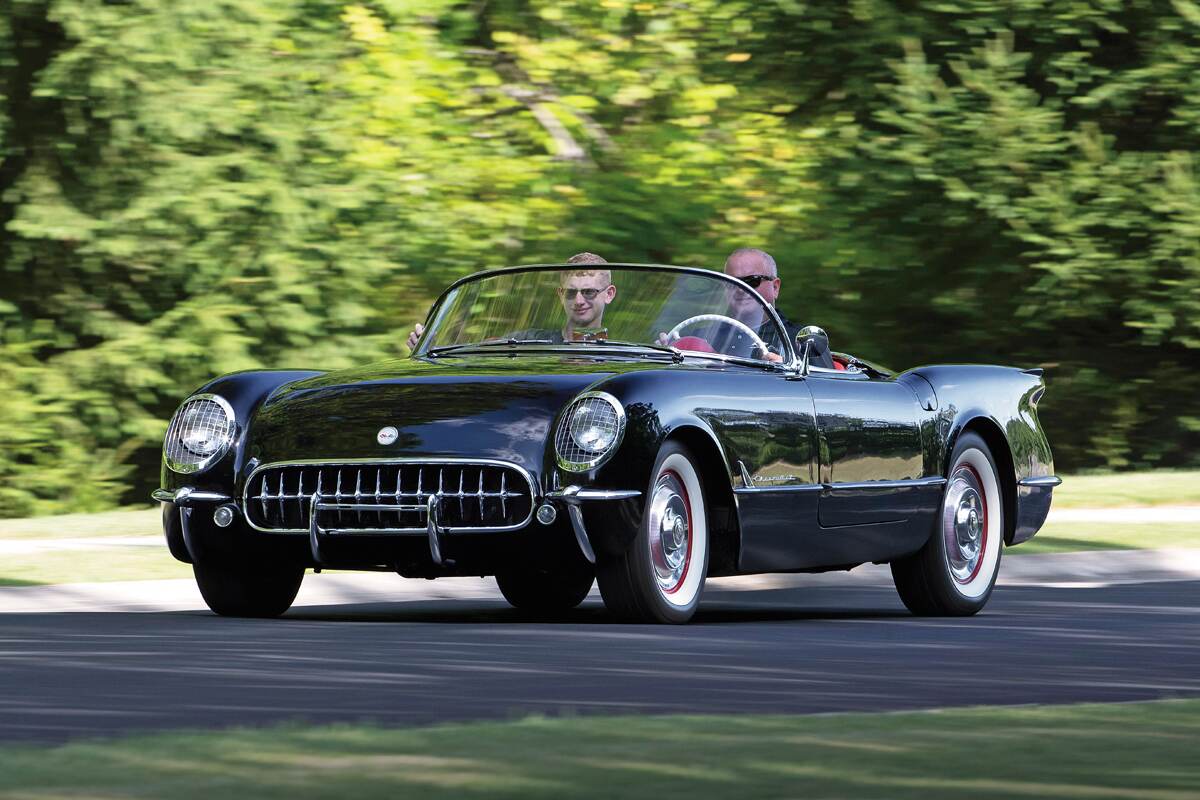 When it comes to almost everything under the sun, ranging from music, fashion, hair styles, and recreational activities to movies, vocabulary, adult beverages, and industrial design, each successive generation has its own preferences. One notable exception is the Corvette, the appeal of which has proven nearly universal over the past seven decades. Rather than go out of style as they age, vintage Corvettes tend to become even more desirable with not only the individuals who experienced them new, but also their children, grandchildren, and even great-grandchildren. As a result, Corvettes can act as a sort of glue that binds generations together.

Ken Morris, the owner of the beautiful 1954 model shown here, knows this as well as anyone. “I grew up on a farm in Southern Indiana,” he says, “with a dad who was always working on cars in one way or another. My parents bought GM vehicles, and that engendered my love for GM from the beginning. I also realized very early in life that when it comes to cars, the more power, the better.”

At one point, Morris’s dad stopped working as a construction superintendent and started instead operating a full-blown junkyard on the farm property. “During its peak we had well over 100 cars and trucks on our property. My job was to help move vehicles, engines, and transmissions as needed with our tractor and loader, as well as remove parts from cars and break down engines. So I spent a lot of time as a kid getting to know the inner workings of cars and trucks.” 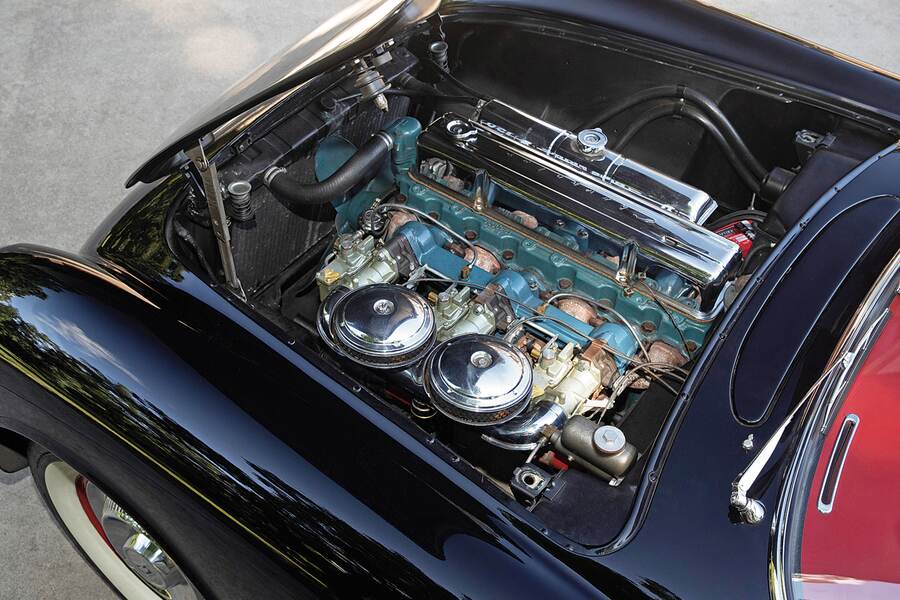 Corvette’s “Blue Flame” six-cylinder benefited from a number of upgrades that boosted its output by 35 to 40 hp over the base, passenger-car version.

Unsurprisingly, given that he loved powerful cars and grew up in a GM family, Morris became fascinated with Corvettes at an early age. “The Corvette was always the car I wanted,” he recalls. “It captured my imagination, and I loved every chance I had to see one.”

Morris’s interest in Corvettes was so strong that it actually helped direct his career path. After earning a mechanical engineering degree from Purdue University, he went to work for GM. In the mid-1990s he was involved with suspension development for the upcoming Cadillac CTS sport sedans, after which he led the team on the 2004 CTS-V. Morris’s responsibilities continuously expanded, leading to his involvement with every performance vehicle GM has produced over the past two decades, including, of course, the Corvette. He had a direct role with the Corvette team as Vice President of Global Product Programs, and, interestingly, he still oversees the company’s flagship sports car in his new position as VP for Autonomous and Electric Vehicles. (Draw your own conclusions.)

“General Motors is committed to an all-electric future for a full range of vehicles, including cars with great performance,” Morris says. “I’m excited to be putting the team that redefined supercar performance, design, and attainability in key roles to help us integrate and execute our EVs to those same high standards.” 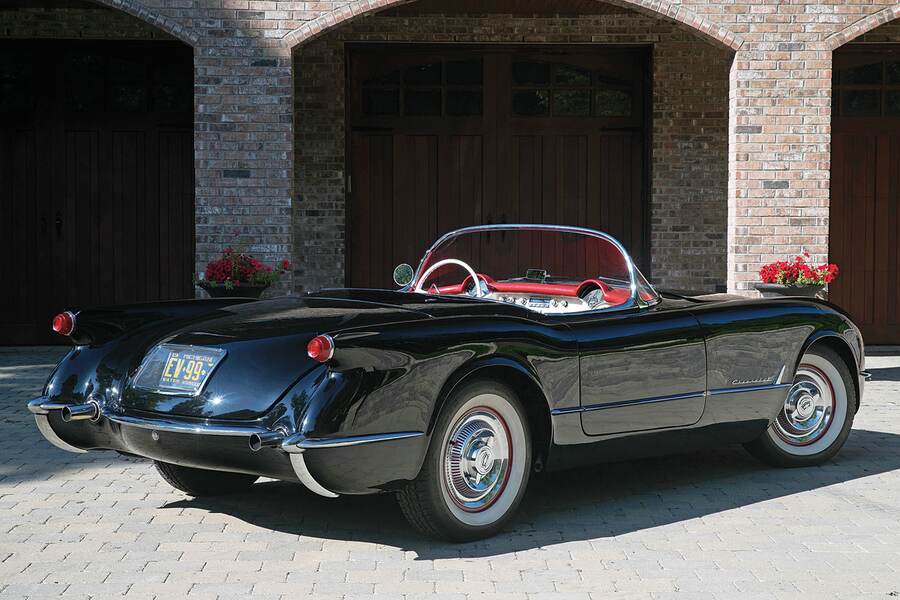 Aside from the limited availability of a handful of new finishes, the second-year Corvette was virtually identical to its predecessor from the outside. Note, however, that the exhaust tips on the ’54 protrude a bit farther from the bodywork, a change made to prevent the heat-induced paint discoloration that affected some ’53 models.

Just as Morris’s dad passed along his love for all things mechanical to Ken, he is doing the same with his own son, Brock. “Brock is technically minded and naturally curious,” he points out, “and he is surrounded by the latest and greatest vehicles, as I am lucky enough to get to bring them home during evaluations. He often hears me talking about the auto industry in general, and I let him ride along in every car I get. We discuss the positives and negatives of each, and we just talk about cars in general every day.”

Growing up surrounded by cool cars, and experiencing the influence of a dad who is so passionate about them, has convinced Brock that he’d like to forge his own career in the auto industry. He’s interested in both engineering and design, so it’s not yet clear what trajectory he’ll follow.

“I’m aiming to have a job similar to my dad’s,” he says. “When we are standing around a new car he’s brought home to evaluate, such as the new C8 Corvette, and he explains how they designed each part…so it’s perfect for the job it does, that blows my mind. I also love the spirit of competition among brands in the auto industry. I love seeing companies put out a car that will blow the competitors out of the water, and then seeing how the other companies react. I also love looking at and thinking about how a car was designed to be the best it can be.” 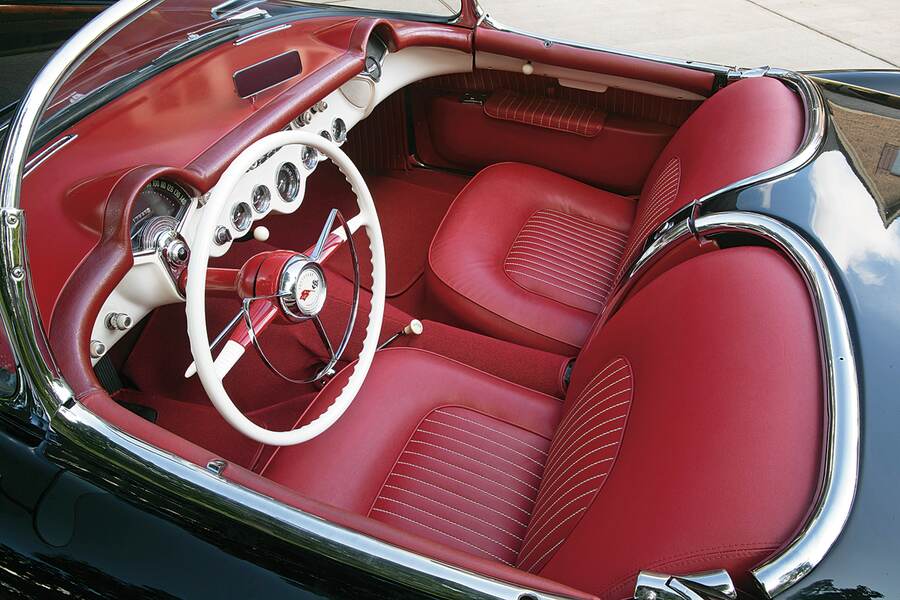 Sportsman Red interior was standard on all ’54s, save for the Pennant Blue examples.

Besides analyzing and discussing cars every day, Ken and Brock also enjoy getting hands-on, especially with their ’54 Corvette. The car was in good operating condition when Ken acquired it several years ago, but as with any vintage machine, there is always something that requires maintenance or attention. Brock takes care of most of the routine maintenance, and he’s not afraid to tackle whatever repair needs arise as well.

The Morrises’ ’54 is one of only 3,640 produced at Chevrolet’s St. Louis assembly plant in Corvette’s second year of production. Like all ’54 Vettes, it was fitted with a 235.5-ci inline six-cylinder engine and Powerglide two-speed automatic transmission. Though the engine used the same #3835911 cast-iron block found in contemporary Chevrolet passenger cars and trucks, it benefited from a bespoke, high-compression cylinder head, which increased the compression ratio to 8.0:1.

The six also was fitted with a high-lift camshaft, a free-flowing exhaust manifold, and a power-enhancing induction system featuring three side-draft, one-barrel Carter YH carburetors. These Corvette-only parts boosted the engine’s output to 150 horsepower, 35 more than the Chevy Bel Air’s 115 hp. About halfway through 1954 production, a camshaft revision further increased the Corvette’s horsepower rating, to 155. 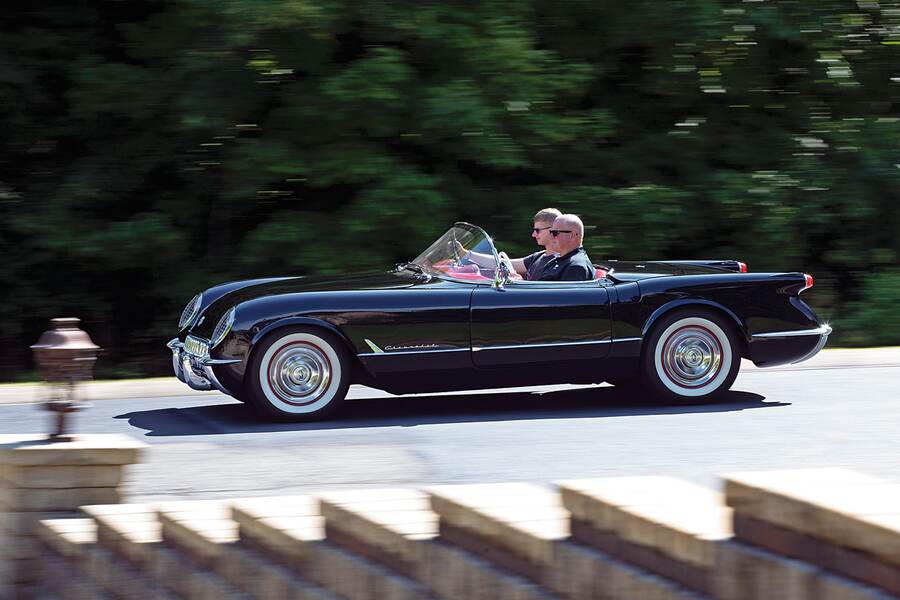 Ken (driving) and Brock enjoy the car whenever possible, but they note that it’s a tight fit for taller drivers. (Note their orientation to the windscreen.)

Though the ’54 Corvette order form listed only eight options, including directional signals, a heater, a signal-seeking AM radio, 6.70×15-inch whitewall tires, the aforementioned Powerglide transmission, a parking-brake alarm, courtesy lamps, and a windshield washer, every ’54 Corvette that Chevrolet assembled came equipped with all of these items, so they weren’t really “optional” at all. When the cost of all that mandatory equipment was added to the $2,774 starting price, the total MSRP jumped to a hefty (for the era) $3,254.10.

While approximately 80 percent of ’54 Corvettes rolled off the assembly line wearing Polo White paint, a few hundred left the St. Louis factory resplendent in Sportsman Red, Pennant Blue, or Black. (It’s possible a handful of ’54s were originally painted other colors, including Metallic Green and Metallic Bronze, though no verification for these colors is known to exist.) It is believed that all ’54s came with red wheels and a beige convertible top, regardless of exterior color.

The white, red, and black cars all came with Sportsman Red interiors, while the blue cars featured a beige treatment. But because the ’54 model did not come with a trim plate (these were first installed in Corvettes in model year 1963), it can be extremely difficult to determine the actual original color of a given car, particularly one that has been completely restored in the past. 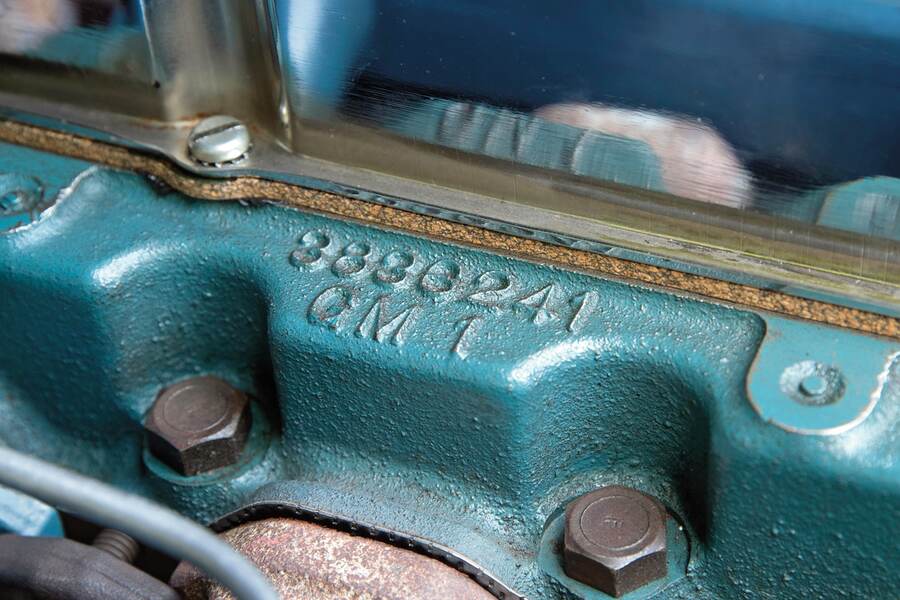 When new, ’54 Corvettes offered relatively healthy acceleration and braking, an impressive top speed, and respectable handling for the era, but their lack of basic creature comforts, such as roll-up windows, exterior door handles, door locks, and a weather-tight interior, made them challenging to use for everyday transportation. The relentless advance of technology can make their throwback performance and overall crudeness seem quaint by today’s standards, but that doesn’t dissuade devoted enthusiasts like Ken and Brock from thoroughly enjoying their pristine example.

“It’s a beautiful car,” notes Ken, “and I love seeing it in motion. I also find it particularly interesting to think about how Corvette has evolved over the years, from the beginning to the modern cars, including how the occupants are positioned, the technology, and how the vehicle sounds and feels. While I do love driving it, the realistic downside is that it’s a small car and it’s quite tight for a tall person, so it’s not a car I’d drive across the country.”

“There are so many things about this Corvette that I love—[the] styling and simplicity, and it’s fun to work on,” adds Brock. “And of course, I really love driving it. Some of its shortcomings can be annoying at first, but when put in context, the many quirks actually add to the experience of driving it. For example, my dad and I are both quite tall, so when we are driving…the top of the windshield obstructs our view of the road. This means we have to either slouch to see beneath the top of the windshield frame, or sit up as [much] as we can to see over the frame.” 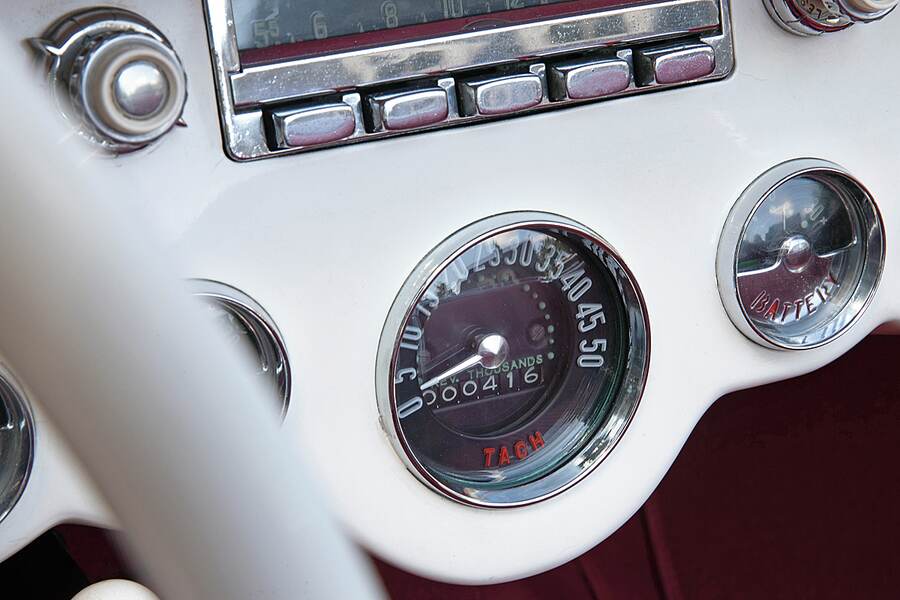 Above all else, however, Ken and Brock treasure the bond that cars in general, and their ’54 Corvette in particular, has forged between them. “The best part of owning the ’54 has been spending time enjoying it with Brock,” Ken says. “It’s a connection that will last. We will always be able to talk about cars, and enjoy our memories of the Corvette and all the different vehicles we are able to experience together.”

“It has really meant a lot to share this passion with my dad,” adds Brock. “Often on Saturday nights we will sit outside around a fire and just talk about cars, and a lot of times this is my favorite part of the week. The experiences we share with the ’54 and all of the other cars will stay with me forever.” 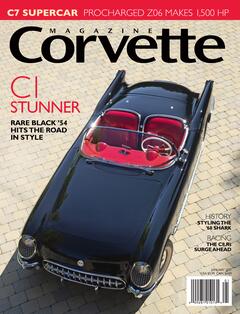