In contrast to some of the tuner’s earlier offerings, Callaway’s subtly styled 2013 SC652 let its formidable performance do the talking 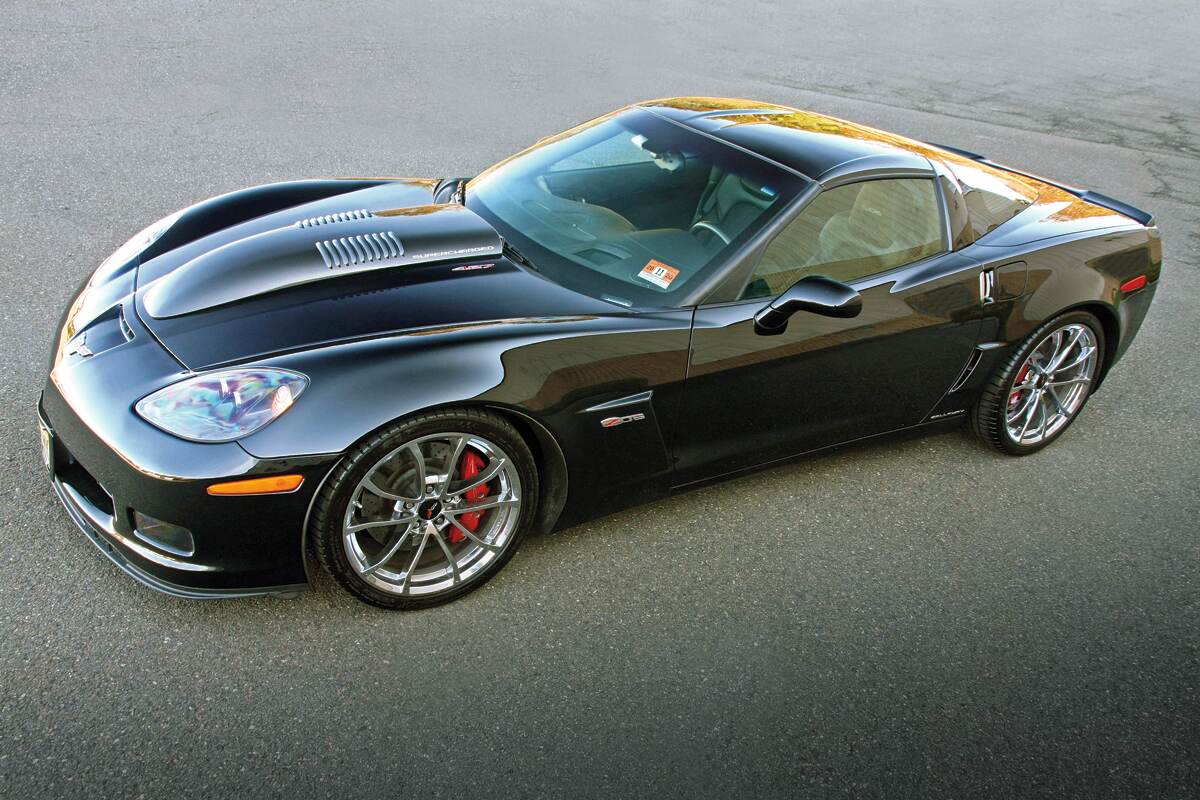 Thumb through any of the “tuner shootout” articles that were popular with the big auto mags of the 1980s, and chances are good you’ll eventually land on a Callaway Corvette. Callaway Cars, along with Lingenfelter Performance, Doug Rippie Motorsports, and handful of other firms, made a name for itself during the C4 era by offering thoroughly engineered modifications that vastly enhanced the performance potency of America’s Sports Car.

Naturally, each firm had its own area of expertise. John Lingenfelter, who first came to prominence as a production-class drag racer, was an engine builder par excellence. Rippie, meanwhile, was a road-course specialist with a penchant for suspension tuning. But it was Reeves Callaway, who had been dabbling with forced induction since the mid-1970s, who was tapped by GM to develop a factory-sanctioned turbocharger system for the fourth-generation Vette.

The result of his efforts—a twin-turbo affair featuring a pair of top-mounted intercoolers—carried regular production option (RPO) B2K and cost $19,995 when it was introduced on the 1987 model. So equipped, the Corvette’s output jumped from 240 to 345 horsepower (bumped to 382 a year later), while top speed climbed to well over 180 mph—numbers few cars of the day could match, regardless of price. Callaway built more than 500 B2K C4s from 1987 through 1991, some clad in a terrific-looking exterior restyling package dubbed the AeroBody. 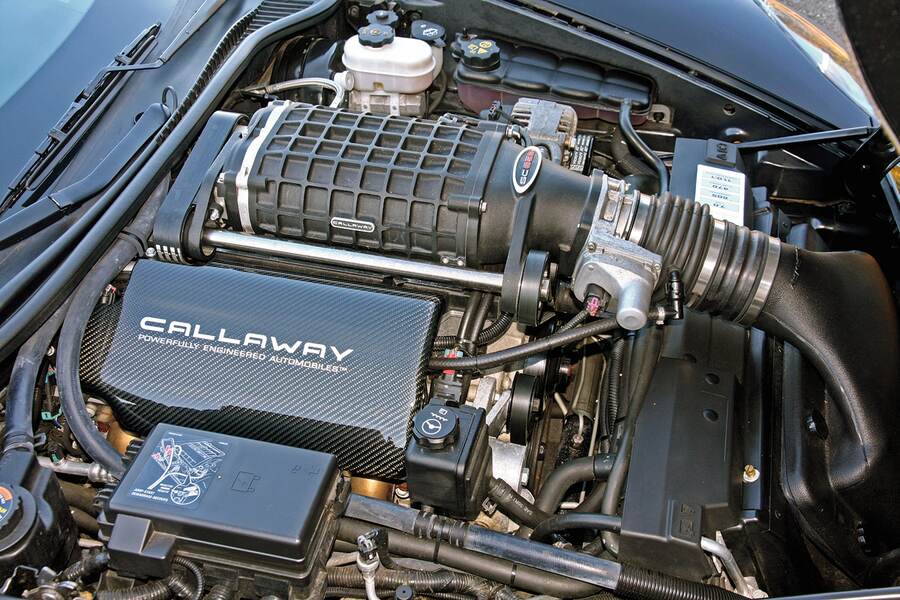 The ’90s prompted a necessary shift in Callaway’s tuning approach. With the ’92 Corvette’s new LT1 engine boasting a healthy 10.4:1 compression ratio and generating a solid 300 horses in stock form, the tuner dumped turbocharging and introduced its SuperNatural range of aftermarket engine upgrades. Callaway also went endurance racing for the first time, entering two LM-GT Corvettes in the 24 Hours of Le Mans in 1994, and capturing Second and Third Places in its class there a year later.

With its background in late-model Corvette performance, Callaway Cars was well-positioned to capitalize on the outpouring of interest in speed tuning that followed the introduction of GM’s LS engine platform in the late-1990s. The firm’s first effort, the 1997-01 C12, featured an exotically styled body and a price tag likely to induce tachycardia in non-billionaires. Only 20 were sold, perhaps indicating that the market for a domestic supercar remained underripe.

Callaway duly took a different tack with the C6, dialing back the cosmetic ostentation in favor of a new forced-induction engine package. This time it was supercharging that got the nod, specifically a Roots-type TVS unit with Callaway-specific intake and cooling upgrades. As installed on a base C6 Vette, the somewhat unimaginatively named “SC” package generated from 560 to 620 hp, depending on model year and whether the car in question also benefited from the company’s internal engine mods. 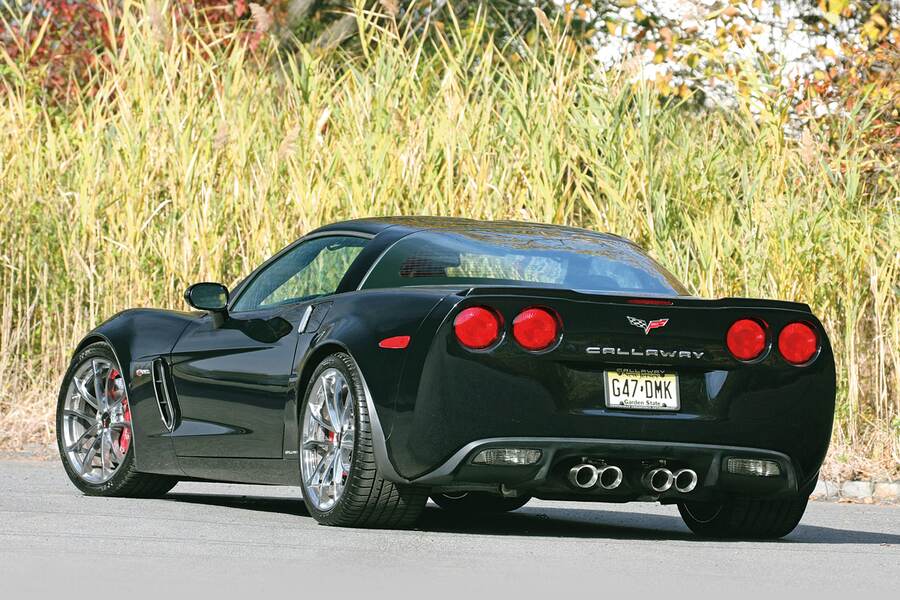 Stock exhaust has had its active valves locked open for a more aggressive tone.

That number jumped only a bit, to 652 hp, on the Z06 model, a consequence of that car’s racing-influenced LS7 engine being a more tightly wound beast from the factory. Still, with a positively Antaean 620 pound-feet of torque available at just 4,500 rpm, the SC652 could reportedly inhale the quarter-mile in just under 11 seconds at nearly 130 mph—assuming you could hook it up.

Though they lacked the stylistic bravado of the AeroBody cars and the C12, the SC-series C6s did feature a number of exterior alterations to set them apart from the Corvette hoi-polloi. Most prominent among them was Callaway’s aggressively bulged carbon-fiber hood, an item required to provide clearance for the top-mounted blower. Additional functionality was offered by two rows of gill-like slats in the top of the bonnet, which allowed heat to escape the engine compartment.

Other visual signifiers included carbon-look engine covers, the obligatory complement of “Callaway” and “Supercharged” badges, and options ranging from a set of natty forged wheels to the company’s split-pipe Double-D exhaust system. In sum, it was a presentation that hewed closely to Teddy Roosevelt’s oft-repeated maxim on the exercise of power. 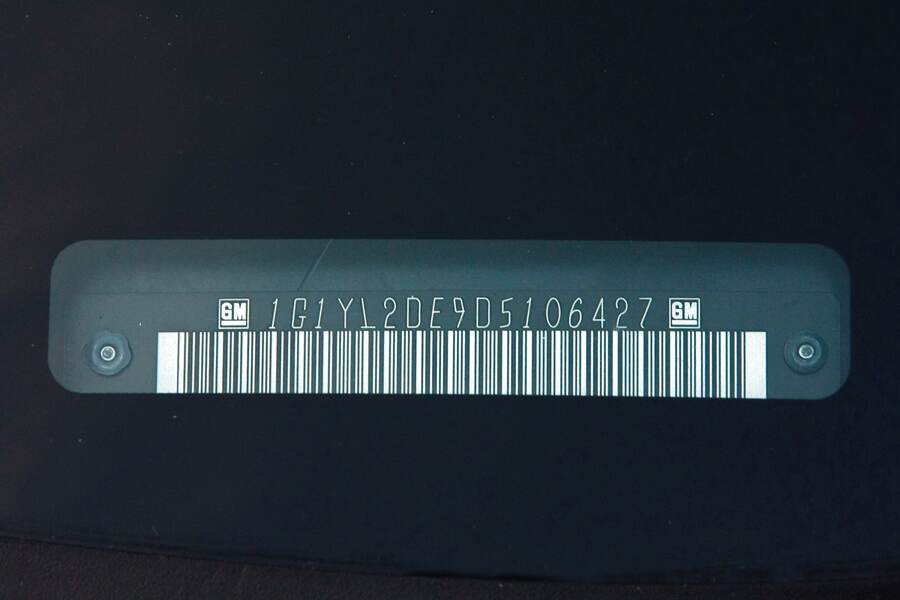 Surprisingly, the Z06’s model-appropriate VIN appears to have been assigned by happenstance.

For the truly performance addled, Callaway offered coil-over shocks and upgraded braking hardware, parts whose development undoubtedly benefited from lessons learned during European racing arm Callaway Competition’s wildly successful C6 GT3 program. Then, as now, speed cost money. All Reeves and company needed to know was, How fast do you want to go?

It’s not terribly uncommon to happen across an SC-Series C6 at larger marque-exclusive events such as Bloomington Gold or Carlisle, but the Z06-based SC652s tend to be a bit thinner on the ground. We were pleasantly surprised, then, when one of our contributing photographers unearthed this ’13 model at a recent show in central New Jersey. Owned by Toms River resident Ron Banach, the car carries the nickname “Black Diamond,” in part a reference to Banach’s grandfather and uncle, who worked on the famed Lehigh Valley Railroad. The railroad, which ran between Lake Erie and New York City for more than a century before ceasing operations in 1976, was known as the “The Route of the Black Diamond” thanks to its status as one of the primary carriers of coal in the region.

Solidifying the car’s sobriquet was a comment made by one of Banach’s friends, who once noted that the jet-black SC652 was “shining like a black diamond” in the sun. But unlike that rare substance, also known as carbonado and believed by some to have extraterrestrial origins, the background of Banach’s gem of a C6 is well documented. 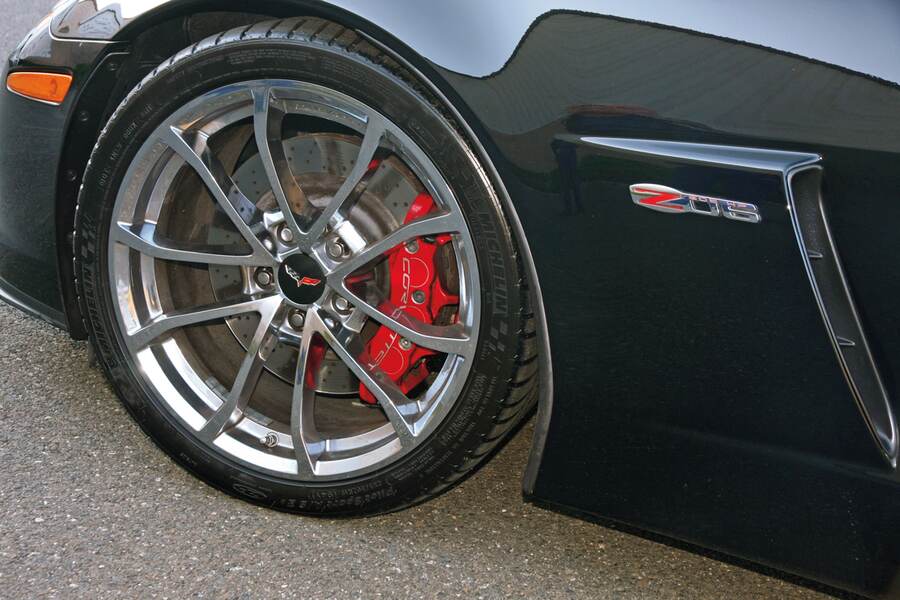 While you might expect such a distinctive and model-appropriate identification number to have been part of a custom order, Banach reports that that does not appear to be the case this instance. “That option [RPO PIN] usually costs $5,000, but there was no charge for it on the window sticker.” Think of it as a special-edition Corvette without the “special” pricing adjustment.

Also worth noting is the connection to Sun Chevrolet, a dealership chain well known among Chevrolet enthusiasts for having purchased Yenko Chevy in 1982. Yenko, of course, made a name for itself transforming stock Chevelles, Corvairs, Novas, and, yes, Corvettes into hopped-up street and track machines in the 1960s and ’70s. 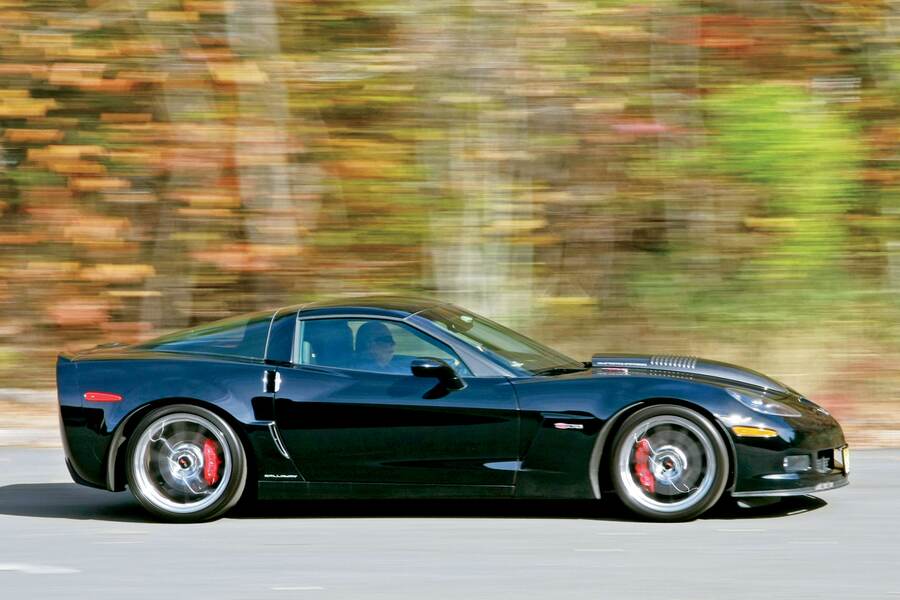 After a stint on the Sun lot, the car was shipped to MacMulkin Chevrolet in Nashua, New Hampshire, where it quickly caught the eye of a salesman who had worked with Banach in the past. “[We] made the deal as quick as I could say, ‘Sold!’ and I left to go pick it up at 3 o’clock in the morning,” Banach says.

In addition to the aforementioned obsidian paint, the Z06 was well equipped with factory options such as the 3LZ Equipment Group, 38S Red Custom Stitching, the F55 Magnetic Selective Ride Suspension, chrome “Cup” wheels, and a ZR1-style rear spoiler. Though not a rarity by any means, the car is one of just 123 Black Z06s built for 2013, the ninth and final year of C6 production.

Of course, the features that truly set Banach’s car apart from its Z06 kin were installed not at Bowling Green Assembly, but rather at the Callaway facility in Old Lyme, Connecticut. There, the car received the supercharger, hood, badges, and other items required to transform it into a proper SC652. 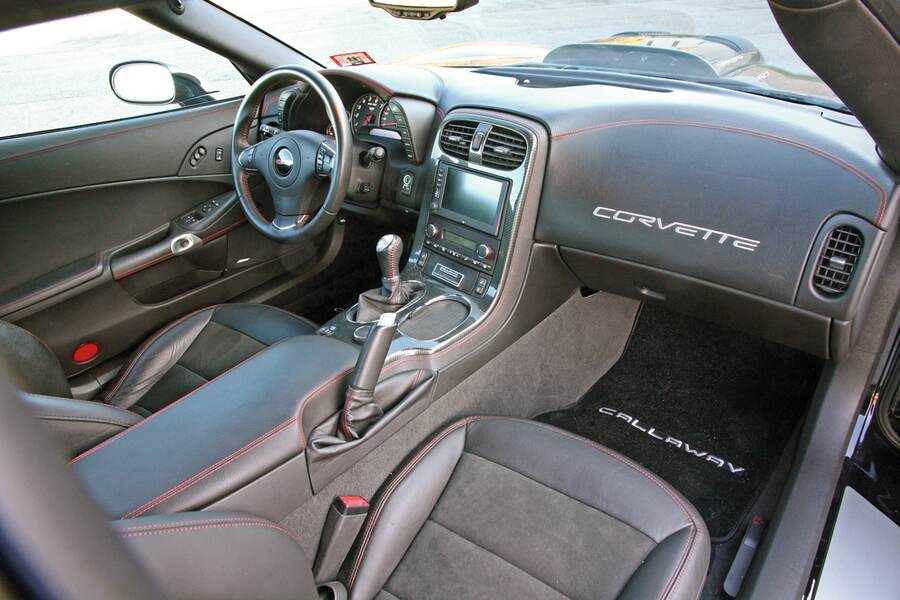 As noted previously, the rev-happy LS7 engine, with its 11.0:1 compression ratio and hypereutectic pistons, is perhaps not the ideal foundation on which to build an ultra-high-output forced-induction engine. Realizing this, Callaway’s engineers limited the blower’s boost to just 7 psi, as opposed to the 11.5 psi used on the C6 ZR1’s heavily fortified LS9. They also spent considerable time tuning the factory ECM to prevent any chance of under-hood pyrotechnics.

Though the finished product rivaled the 638-hp ZR1 in price, the SC652’s tuner-car cachet, along its a slight edge in the horsepower and torque departments, served as sufficient inducements for Banach to go the Callaway route. The firm even covered the car with a three-year/36,000-mile powertrain warranty, something virtually unheard-of in the aftermarket realm.

Banach tells us he drives his SC652 up to 2,000 miles each year, and the odometer has racked up around 12,000 clicks in the seven-odd years he’s owned the car. But that doesn’t make it a driveway ornament, he notes. “I use it for anything I want to do,” he says. “It’s not a daily driver, but it’s not babied, either.” 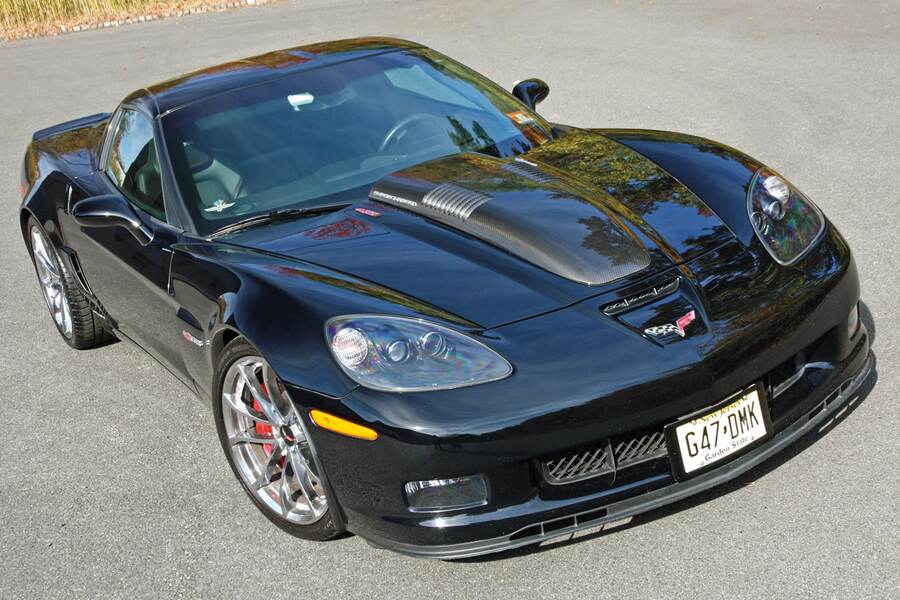 Indeed, the car has been on a number of reasonably long-distance hauls during its time under Banach’s stewardship, including to the Indianapolis Motor Speedway, where it touched 130 mph during what was supposed to be a series of reasonably low-speed parade laps.

“I chose the last spot in the line, then hung back and let the other cars pull away from me,” Banach says. “Once they were out far enough ahead, I hit it—and caught up in a hurry. The car pulls like a freight train from 4,000 rpm up.”

Banach, who also owns a big-block ’74 Vette, a 409 Impala, an LS6 Chevelle, and a few other domestic speed machines, feels that his SC427 is the “modern-day equivalent of a Baldwin Motion car,” high praise given that Long Island–based firm’s reputation as one of the top tuners of the muscle-car era. But what else would you expect from Callaway, whose huffed Corvettes have been eclipsing performance expectations for more than three decades? 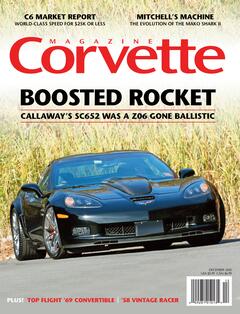