After his first custom Corvette was stolen, Larry Malcolm recaptured its magic with this wide-body C6 convertible 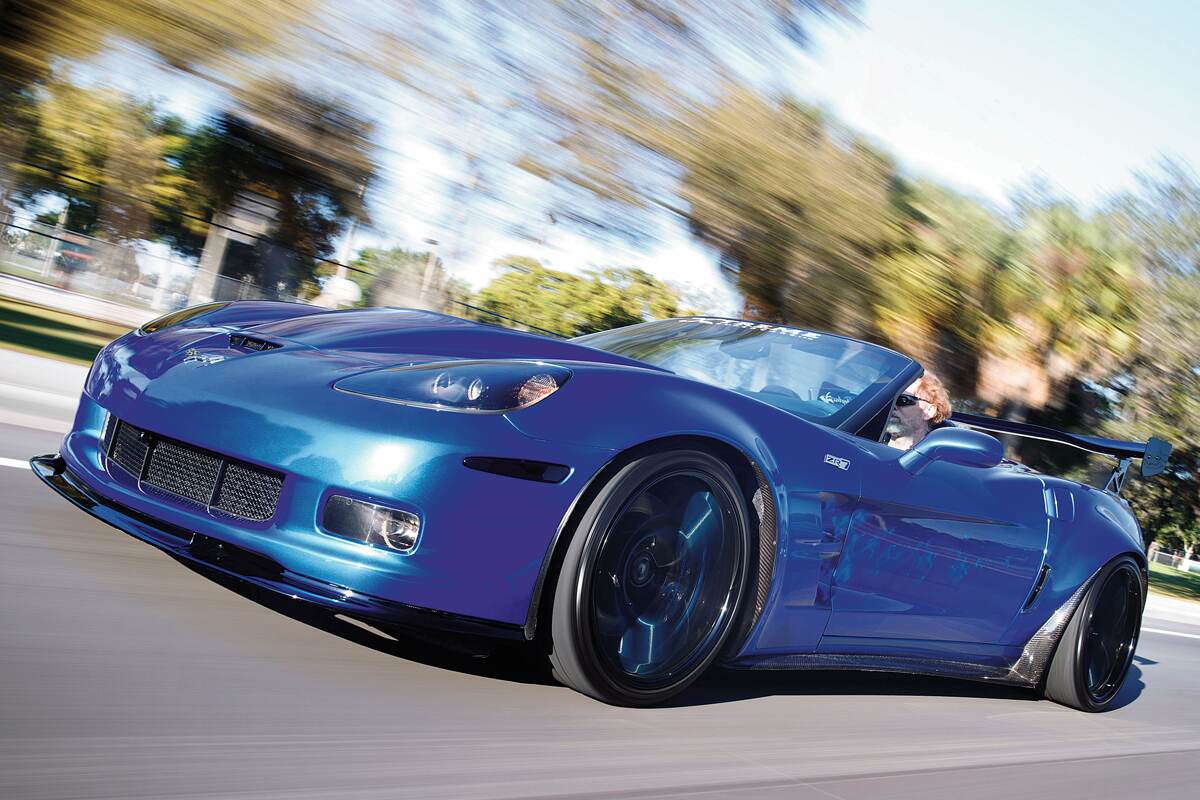 You may have been cool in high school, but you probably weren’t Larry Malcolm cool. While most of us were getting around in an ordinary car, and the lucky among us had a nice Camaro or Mustang, Malcolm was enjoying every teenager’s dream, cruising with style in a 1971 Corvette convertible. In the ensuing years, he enjoyed owning and driving many other Vettes, including 1972 LT1, ’73, ’74, ’84, ’97, ’06, and ’17 models.

In keeping with the times and his personal taste, most of Malcolm’s Corvettes were convertibles, and most were lightly modified with aftermarket rolling stock and a few other custom touches. He often contemplated letting his vivid imagination run wild and going much further to truly personalize his car, and he finally did exactly that with a ’72 edition. “I had it painted a wild shade of orange,” he recalls, “and made a lot of performance improvements, including adding twin turbochargers to the engine.”

Malcolm loved his wild custom, but before he could fully enjoy the car, it was stolen and never seen again. Fast forward a couple of decades, when he decided to recapture the joy that was taken from him, but this time with a newer and far more capable starting point. 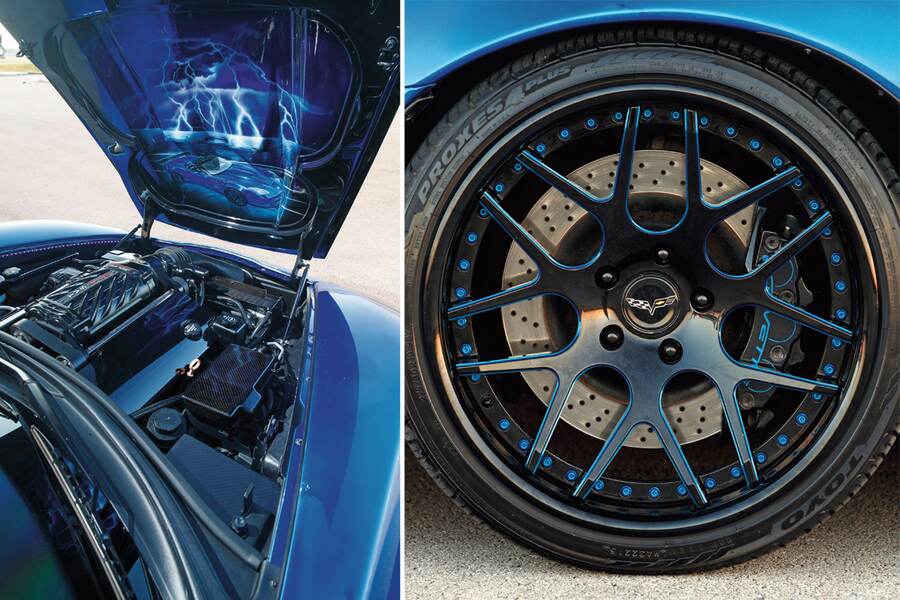 “In 2012 I decided to buy a new Corvette,” he explains, “[then] immediately began making some changes. I loved the look and power of the ZR1, but it wasn’t offered as a convertible. I’m also very particular when it comes to color, and didn’t really care for any of the standard production colors Chevy offered.”

To solve the power issue, Malcolm turned to forced induction in the form of an SLP/Magnuson TVS 2300 supercharger kit. Because the original selling dealer agreed to honor his C6’s new-car warranty if any engine issues arose, Malcolm had the techs there install the blower system. Based on SLP’s output claims, this modification boosted engine output from 430 to a little over 700 horsepower.

More power inevitably means more heat to control, which can really be a problem on a modern Corvette with limited engine-bay space. To deal with that concern, Malcolm installed a custom-fabricated aluminum radiator with nearly twice the cooling capacity of the stock unit. Meanwhile, stainless-steel headers feeding custom-bent ceramic pipes wrapped in heat-shielding cloth hasten the flow of air out of the blown engine. The push of a cockpit-mounted button opens valves in the exhaust system and instantly changes the engine’s feline purr to a leonine growl. 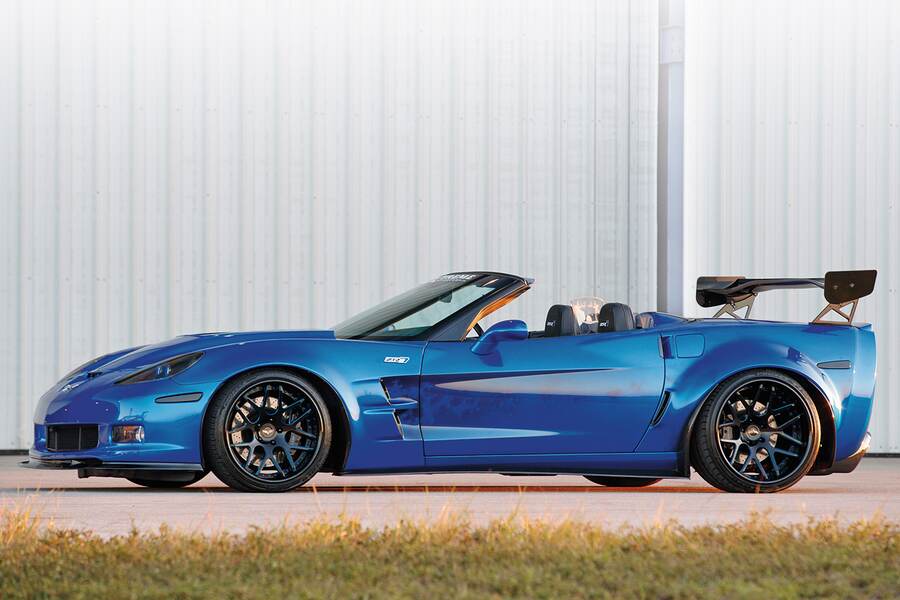 Shortly after the engine work was completed, Malcolm happened to see a C6 modified with a pretty radical wide-body kit manufactured by Xtreme Supercars. Smitten, he got in touch with the company’s Wayne Garner and Laurelle Balog, and ordered up a new set of replacement panels for his own car. As installed, the kit made Malcolm’s convertible 3 inches wider at the rear and 1.5 inches wider up front, as compared with a C6 ZR1.

To push the desired road-race theme further, while also improving the car’s performance, the Xtreme Supercars crew also replaced its stock hood with a carbon-fiber unit from Motor City Mold. Besides looking cool, it weighs 11 pounds less than its factory counterpart. A carbon front splitter, rear diffuser, and side skirts, as well as a fully adjustable APR Performance rear wing, complete the competition look.

To fill the extra-wide wheel wells the Xtreme Supercars body kit creates, Malcolm had custom three-piece rims made for the car. They are wrapped with 275/30R19 Toyo Proxes 4 Plus tires sized up front, and 325/25ZR20 Toyo Proxes T1 Sport in the rear. 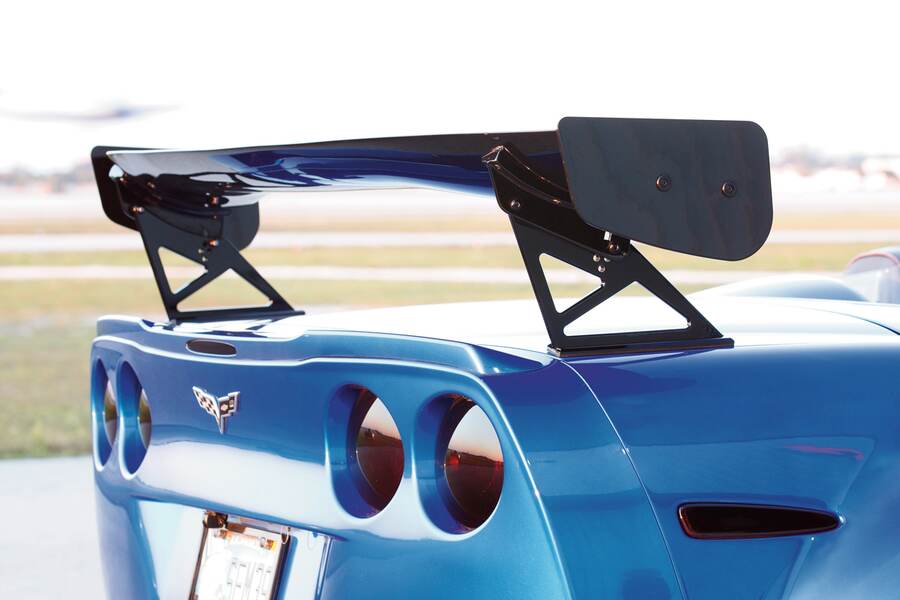 To address his dissatisfaction with the Corvette color palette for 2012, Malcolm had the entire car repainted with a custom scheme he dreamed up, based on an OEM Lamborghini blue. The painter first applied a lavender base coat, topped that with deep metallic blue, and then finished it off with purple “flip” pearl mixed in with the clear. To complement the triple-stage paint, which appears to change color as one moves around the car, the painter also coated all of the exterior carbon parts with a clear coat containing hints of light black, blue, and purple-flip pearl. The black-and-blue motif is carried over to the wheels and brake calipers as well.

Malcolm is an aviation enthusiast and loves the stealthy F-22 Raptor, so he hired an airbrush artist to paint an image of Lockheed Martin’s tactical fighter between the bulges on the convertible deck lid. Another airbrush artist worked his magic on the underside of the hood, adding a depiction of the car itself. The body paint was further customized with the addition of ghost flames on the sides of the car and in the hood bulge’s recesses.

To finish off the exterior, Malcolm installed custom, color-shifting “halo” lights around the headlamps and fog lights in the front grille. At the other end, white halo lights were incorporated into the tail lamps. And for improved safety, he also added park-assist cameras in both the front and the rear. 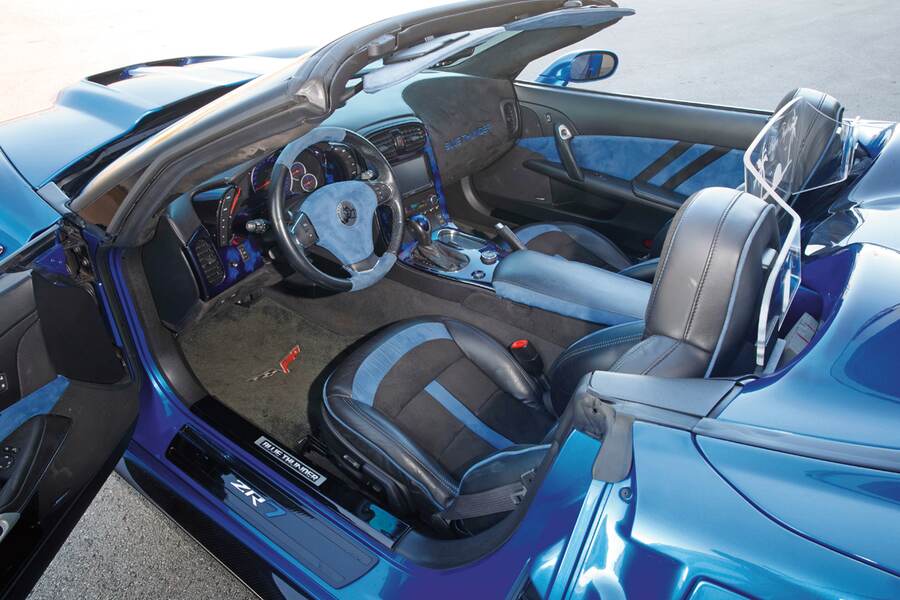 Malcolm next turned his attention to the Corvette’s interior, a process that began with his removing everything so that heat-and-noise-shielding material could be added to the floor, firewall, doors, and rear bulkhead. He then reimagined the seat upholstery, door panels, steering wheel, center armrest, and various other parts with new materials that would upgrade the look and feel, along with new colors that would tie the interior look together with the custom paint.

The seat covers were crafted with high-quality leather and blue-suede inserts, then reinstalled over additional comfort-enhancing padding. The same blue suede incorporated into the seats was employed to modify the steering wheel and cover the passenger-side dash area. Blue thread was used to stitch the seats, armrest, dash covers, center stack, and all other trim, and the seat backs and bottoms were accented with matching blue piping.

Malcolm calls his creation a “Blue Thunder ZR7,” and in keeping with that theme, he had “BLUE THUNDER” embroidered into the passenger-side dash covering. “ZR7” appears in the headrest of each seat, while “SUPERCHARGED” lettering was added to the seatbacks. When the car’s doors are opened, custom lights project the Blue Thunder logo onto the ground. 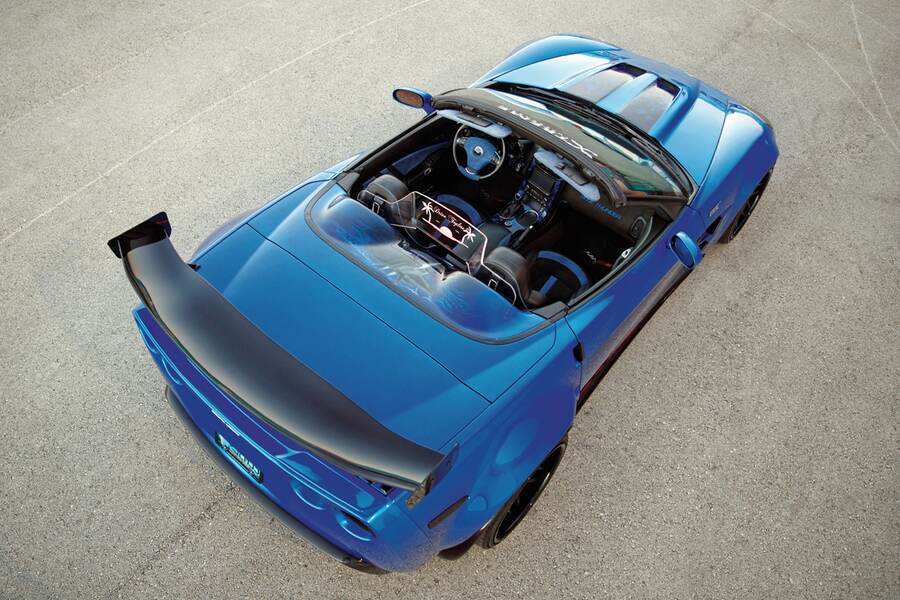 Custom lighting effects are also found elsewhere inside the car. The “Drive Topless” logo in the Lexan wind breaker, which provides a tranquil experience in the cockpit with the top down, glows in different colors courtesy of integral LEDs. Meanwhile, the speedometer and interior courtesy lamps all light up with a blue hue.

While the factory C6 sound system was reasonably good, it wasn’t nearly as powerful or as clear as Malcolm wanted, so he replaced it with a custom-designed aftermarket setup. The new system was built around a Kenwood eXcelon DNX695S head unit, which includes both Apple CarPlay and Android Auto Ready, HD radio, Bluetooth, navigation, and a host of other sophisticated features. The high-end head unit is connected to a 600-watt JL Audio amp mounted in the trunk, while a custom “bass box” in the trunk is outfitted with two 10-inch speakers with a 750-watt amp. A total of four 9-inch, three-way Morel Elate speakers—two in the dash and two in custom boxes behind the seats—further enhance the aural experience.

Though the bulk of the work on the car was completed several years ago, Malcolm never continues to tweak it inside and out. He also thoroughly enjoys his blown C6, as evidenced by the 40,000-odd miles he’s accumulated since bringing it home eight years ago. “It’s fast, beautiful, and incredibly reliable,” he says, “and has been a lot of fun. One of my favorite things about the car is the exhaust, which was tuned to have a lot of crackles and pops. Wherever I go, everyone gathers around…and takes pictures. It draws a lot of attention, and people are always telling me how beautiful it is. 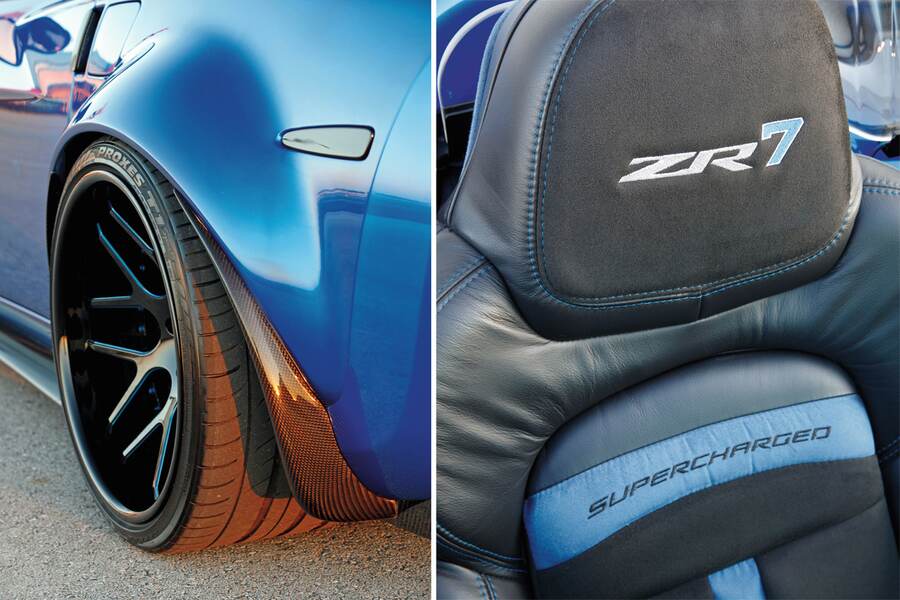 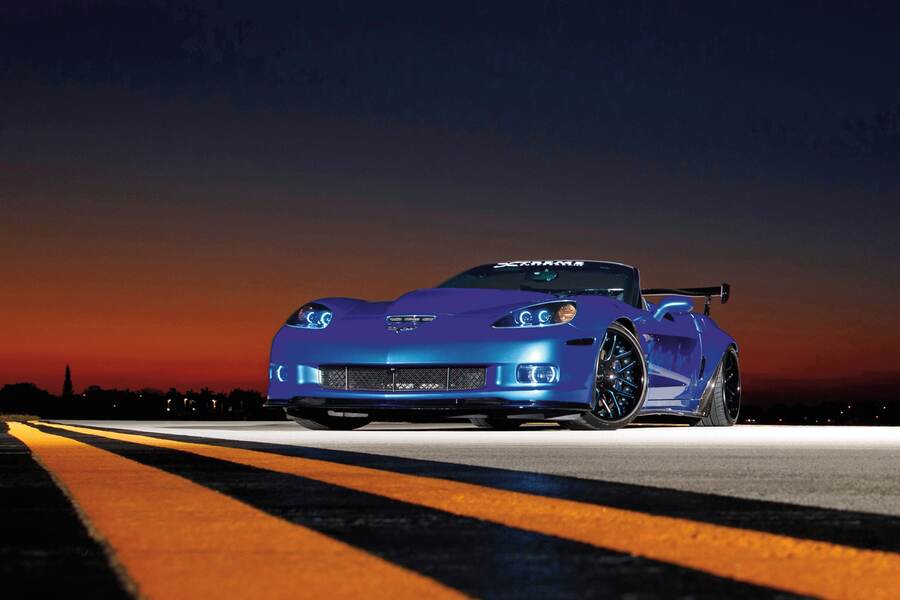 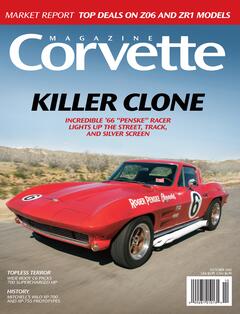