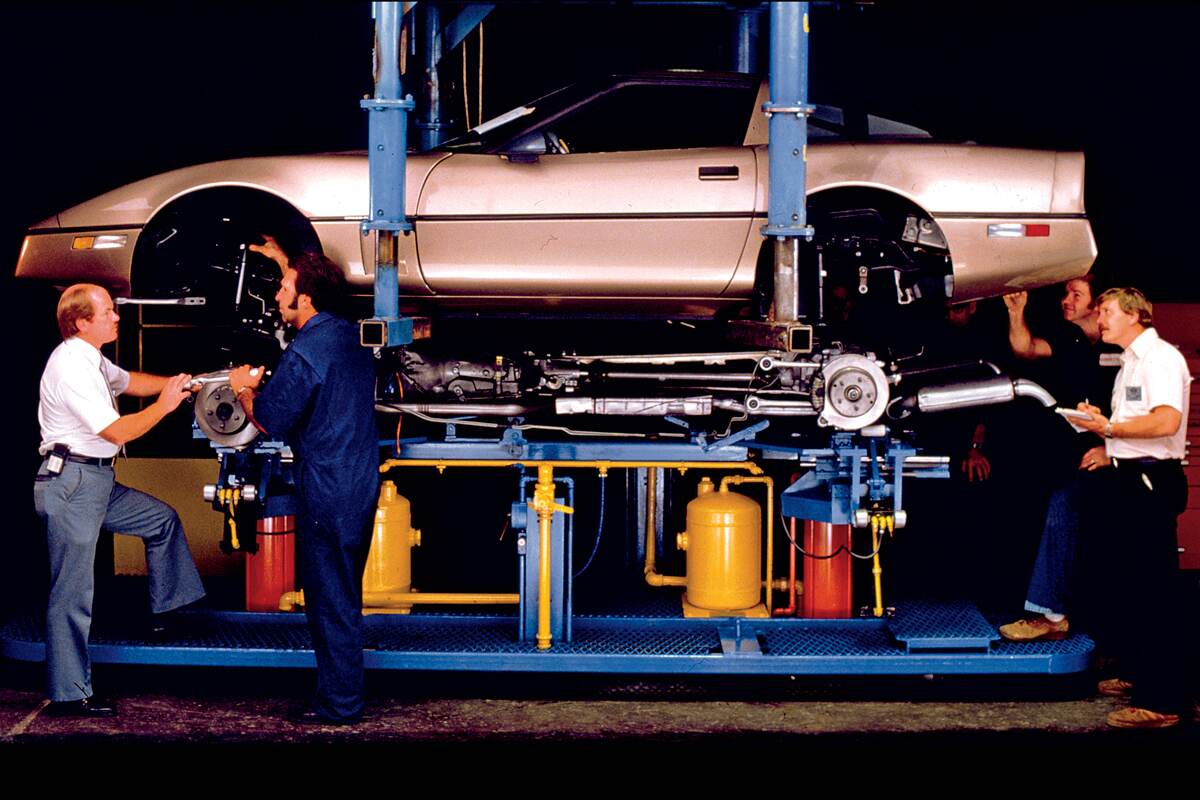 This posed promotional photo from 1983 shows the all-new process by which the C4’s body and chassis were “married” to one another on the assembly line.

It’s been said that Zora Arkus-Duntov’s parting words to his successor Dave McLellan were, “Build the mid-engine Corvette.” McLellan didn’t, although the ME 1976 Aerovette concept came the closest to approval. There were practical reasons why the car didn’t get produced, and frankly, McLellan and others weren’t convinced there was a market for it in any case. By the late-’70s, sales of the admittedly long-in-the-tooth C3 were double what they were at the beginning of the generation, so there was an understandable reluctance to rock what had proved to be a very stable boat.

That said, the Corvette team was well aware that Chevrolet’s premium sports car had crept past its sell-by date. So in 1978, when the production proposal for the Aerovette was officially turned down, McLellan and his team got to work on the next Vette. It wouldn’t place the engine behind the driver, but its exotic backbone would be no less revolutionary—and its basic architecture would serve as the foundation for the next four Corvette generations.

In this second and final part of our retrospective on the Corvette’s chassis-design evolution, we examine the racecar-inspired architectures of the C4 through C7 generations and explore how they helped elevate the car to the world stage. More importantly, these models introduced technologies and established performance thresholds that previously had been available only in low-volume, exorbitantly priced exotic cars. 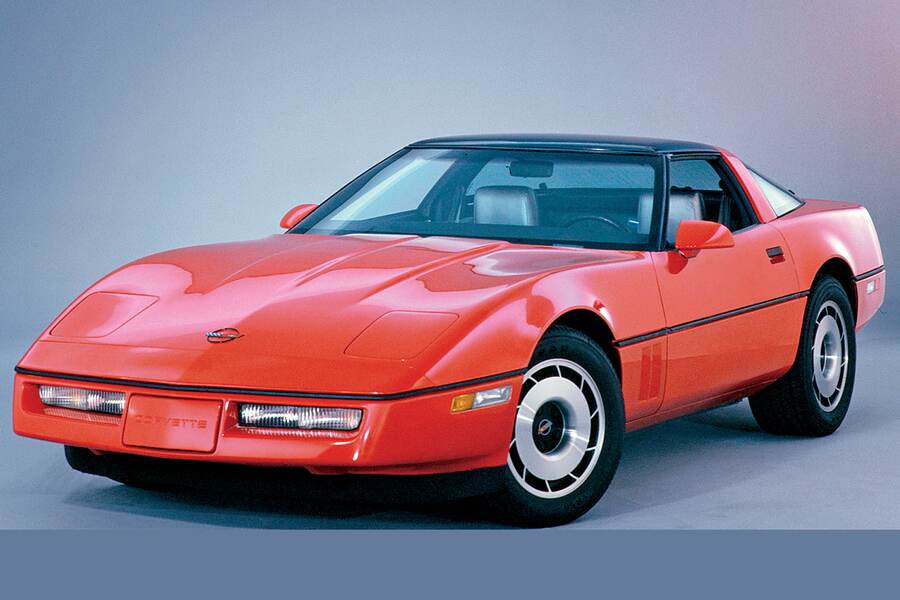 The fourth-generation model was the first Corvette with a unitized chassis—that is, its composite body panels were affixed to a structural skeleton—rather than traditional body-on-frame construction.

Keep this in mind, too: Over its more than 66-year production life and seven generations (to date), the Corvette has remained philosophically and dimensionally steadfast in the face of evolving technologies, culture and demographics. A comparison of 1953 and 2019 models reveals a remarkably similar footprint, with differences in wheelbase, overall length and overall width of around 4.5, 5.5 and 2.5 percent, respectively.

Not bad. Most of us can’t boast a waist that’s within 2.5 percent of our high school graduation’s dimension, so the Corvette has managed to keep things impressively tight. Tighter, in fact—and stronger—with every successive generation.

You Say You Want a Revolution

Hyperbole is easy to come by when discussing Corvettes, but it’s hard to overstate the significance of the completely reimagined C4 chassis design. The ladder frame that had served the car for 20 years was replaced by a unitized “backbone” chassis inspired by racing technology. It eliminated several cross-members, allowing direct mounting of the rear differential and other components, which enabled greater interior room. It was also lighter than the previous frame. 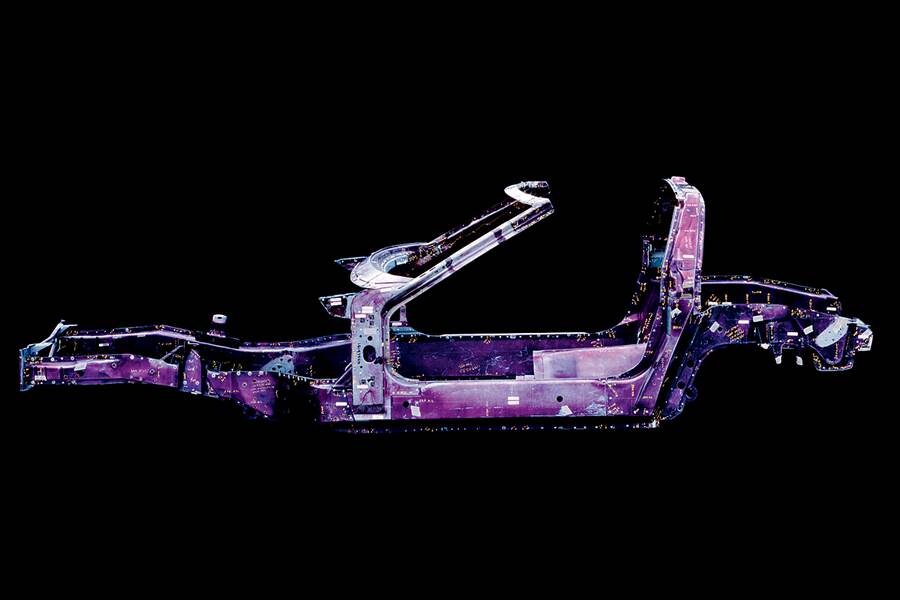 The C4’s innovative backbone chassis, with its C-shaped central tunnel, increased both strength and interior room, thanks to the elimination of the traditional transmission and differential cross-members.

Integrated on the backbone chassis was a “cage” incorporating the windshield and door frames, the rear wall of the cockpit, the rocker panels and more. The Corvette’s body panels were attached to the chassis and cage, marking the first time in the car’s history that it didn’t use a conventional body-on-frame design.

The figurative and literal hurdles in the C4 chassis design were the prominent sills occupants had to clamber over when entering and exiting a 1984-96 Corvette. They were there mostly to provide structural strength to support the open, Targa-type roof design on coupe models, which lacked the reinforcing “T” bar incorporated on C3 coupes. It was a compromised trait that nobody liked then or now, and one conceptually at odds with the C4’s performance-first mission statement.

When it came to the suspension, the C4 again used unequal-length upper and lower A-arms in the front. But rather than coil springs, they were suspended by a new, transverse spring design similar to the rear suspension. At the rear was another transverse composite spring, but used with a new, five-link independent suspension design vs. the previous three-link setup. 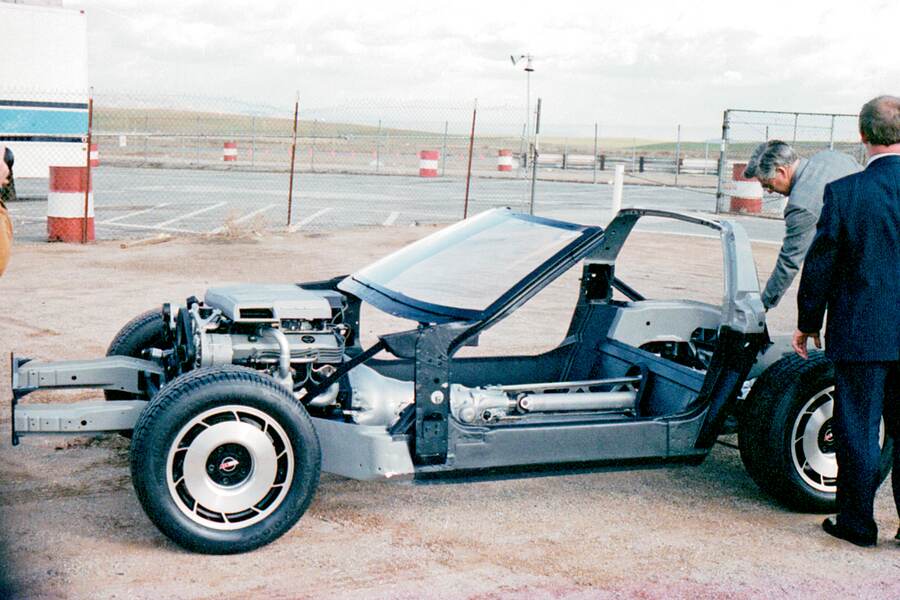 The frame was composed of multiple steel components that, for the first time, included the “cage” around the passenger space. Tall side rockers added strength at the expensive of easy ingress/egress.

It may not have ridden atop an overly rigid chassis, but the C4 nonetheless elevated the Corvette’s driving dynamics to unprecedented levels, earning the car a reputation as one of the world’s best-handling automobiles. Additionally, the monoleaf-sprung front/rear configurations would prove so effective that they would define the Corvette’s suspension design for the fifth, sixth and seventh generations. It was, without hyperbole, a revolutionary change for Corvette.

Dynamically, the 1997-2004 C5 chassis was on par with the ’63 Sting Ray’s independent rear suspension, at least when it came to elevating the Corvette’s performance capability. For the first time, a new-generation car was lighter than its predecessor, and when it came to structural strength, the C5 was the Brooklyn Bridge to the C4’s Tacoma Narrows Bridge. (It’s the one in those old black-and-white films that twisted like a wet noodle in the wind before disintegrating.)

That strength—four times stiffer overall than the C4—was rooted in an all-new, hydroformed steel frame and revised backbone-chassis design. Hydroforming allowed the construction of complex frame components that were stronger yet lighter than conventionally produced parts. The process involved forcing fluid pressurized to 7,000 psi through the frame tubes to push them into their final shape. In the end, the constructed frame side rails were 13 feet long, the longest continuous frame rails in Corvette’s production history. They also helped lower the previously obtrusive side sills by about 4 inches. 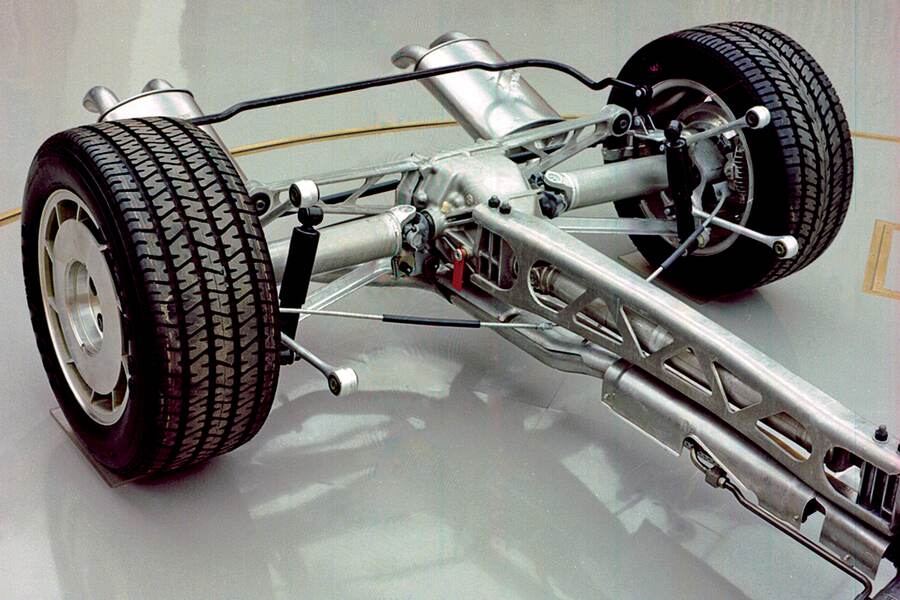 A close-up of the C4’s rear suspension shows the new five-link design, along with the driveline reinforcement that linked the rear axle with the transmission, making it a stressed part of the chassis.

Corvette was the first mass-produced car to employ a chassis constructed largely from hydroformed components, but the C5 development team’s engineering masterstroke was the structural backbone tunnel that cinched the chassis better than all the Spanx worn on the Academy Awards’ red carpet. It linked the fore and aft sections of the frame together, similar to the structure of the C4, but in a more robust housing that was enclosed at the bottom, forming a tunnel. Further, the transmission was pushed to the rear of the chassis to enhance the car’s weight balance, and the driveshaft linking the engine to the transaxle was encased in a stiff torque tube located within the enclosed tunnel.

It was an extremely robust chassis design that still allowed the Corvette to offer an open roof. Moreover, its stiffness allowed for more-precise suspension tuning, because the chassis flex that engineers had to account for in the C4 was almost entirely eliminated. The front suspension was changed to a short/long-arm design, still with a transverse composite leaf spring, which more or less mirrored the rear suspension’s layout.

You Say You Want an Evolution

It’s true that the 2005-13 C6 chassis was an evolutionary extension of the C5 design, but there was a strategic reason for that: 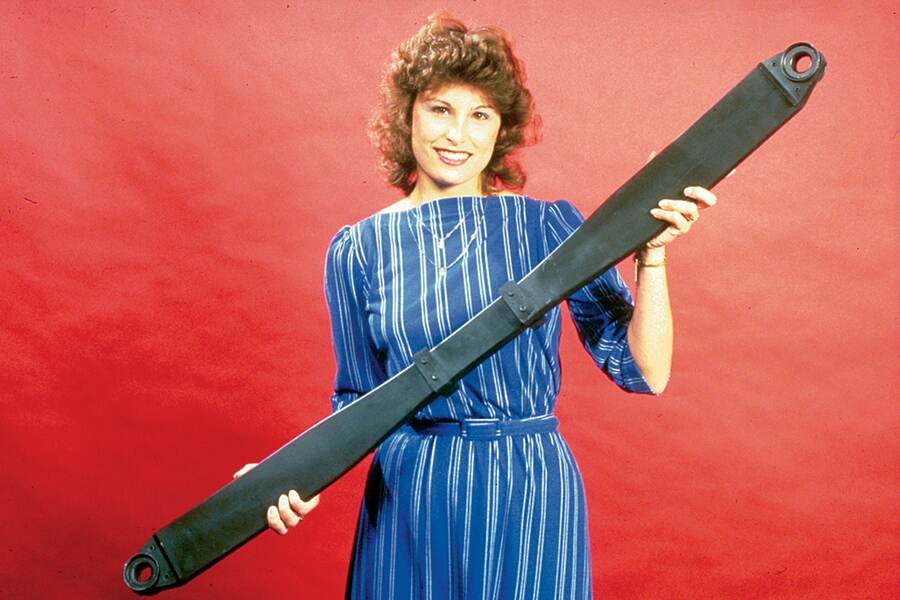 Also new were front and rear transverse composite leaf springs that flattened as they flexed. These also formed an “S” shape in turns, boosting roll stiffness and minimizing the size and weight of the sway bars.

It worked, and worked well.

The key features of the backbone structure and hydroformed perimeter frame rails, including its low mass and high strength, carried over with notable revisions that improved its stiffness and even made it lighter. Some of that added rigidity was built in for enhanced crashworthiness, while other changes, including trimming the overall chassis length by 5 inches, helped reduce its weight.

Dynamically, the C6 rode on a 1.2-inch-longer wheelbase, but the car was 5 inches shorter in overall length, which contributed to a more responsive feel behind the wheel. The short/long-arm front/rear suspension designs carried over, too, but the control arms, springs, dampers, bushings, stabilizer bars and even the steering gear were new. 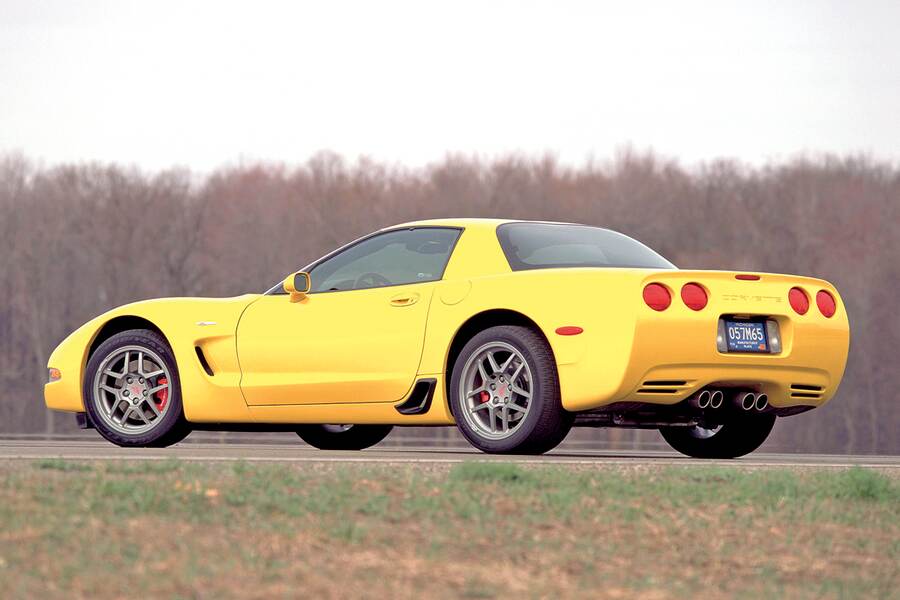 The C5 was built on the strongest, lightest architecture ever for a Corvette. Fixed hardtop models like this Z06 were more rigid still, offering 12-percent greater torsional rigidity than the standard coupe.

The C6 Z06, introduced for 2006, upped the frame-technology ante with an all-aluminum version of the backbone chassis design. It was stronger and lighter than the steel version, enabling a curb weight of right around 3,130 pounds, compared with the ’06 Corvette’s base curb weight of 3,179 pounds, all while the Z06 carried features such as a larger exhaust, larger tires and a comparatively heavy dry-sump oiling system. The aluminum chassis was also used for the flagship C6 ZR1, introduced in 2009.

Chevrolet doubled down on lightweight technology with the C7 for 2014, giving all models an aluminum chassis that was 57 percent stiffer and 99 pounds lighter than the C6’s steel-based frame. In fact, more than $50 million was invested in a new body shop at the Bowling Green plant to bring aluminum-chassis production in-house.

That new chassis, which was another evolution of the proven backbone design introduced on the C5, was so rigid that no additional reinforcements were required for convertible models. The only differences were slight structural changes for the folding convertible top and repositioned seat belt anchors. 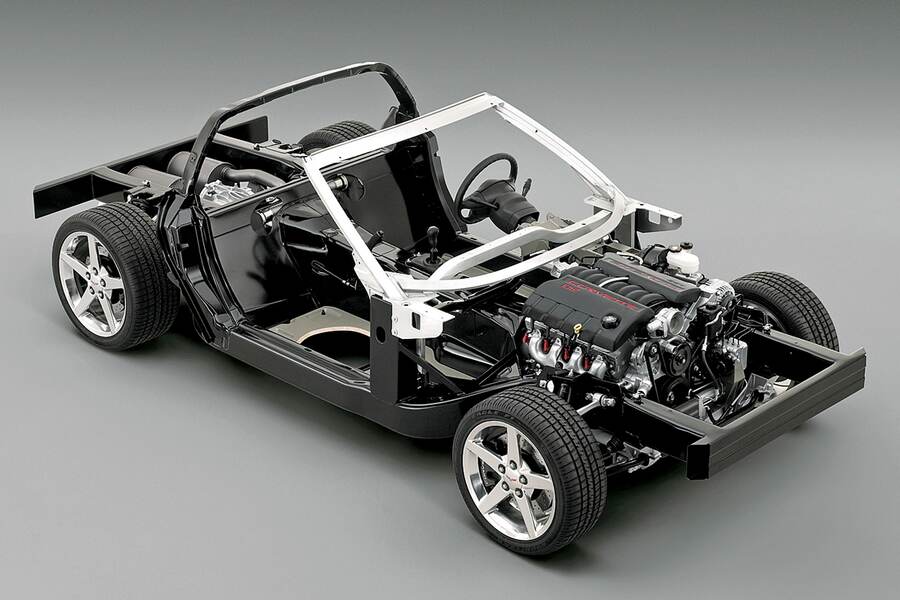 Aside from a few small component changes, the C5 and C6 chassis shared a basic design. Hydroforming replaced what formerly had comprised 36 separate, welded components in the C4 chassis.

Structural material aside, the biggest change with the C7 chassis over the C5 and C6 was the elimination of the continuous hydroformed main frame rails, whose only dynamic drawback was their constant 2mm wall thickness. In areas where that didn’t provide enough meat for the intended load, reinforcements were required. With the C7, the main rails were composed of five aluminum segments of varied thickness, from 2mm to 11mm, to provide optimal strength with minimal weight and supplemental reinforcements. Sophisticated simulation software helped determine the shape and thickness of these segments.

Pound for pound, the 2014 Corvette Stingray was just a bit heavier than its predecessor, with a 3,298-pound curb weight, but it also grew a bit. Its wheelbase stretched 1.2 inches, to 106.9 inches, while the overall length increased 2.3 inches and the width increased by 1.3. The car also boasted an ideal 50/50 weight balance due, in large part, to the innovative aluminum chassis.

Clearly, the hot-handling, rock-solid C7 will be a tough act to follow in the area of handling dynamics. But if there’s anything we’ve learned in the past 67 years of Corvette chassis evolution, it’s that there’s always room for improvement. m 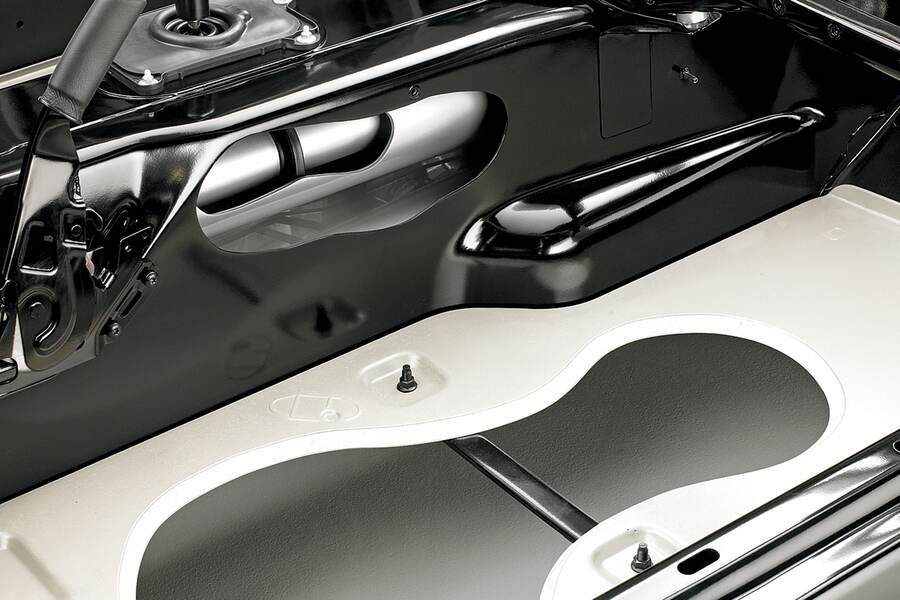 This cutaway image shows the torque tube that connects the C5/C6 engine and transaxle. Also note the balsawood-cored floor, which uses the natural material in a sandwich of composite materials. 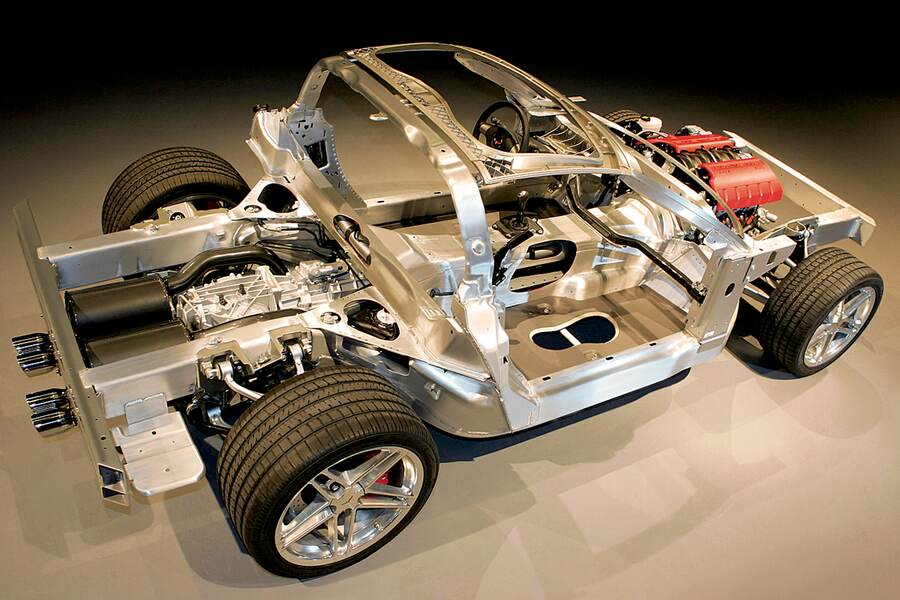 The C6 Z06 introduced an aluminum-intensive version of the backbone chassis. Featuring a magnesium roof structure and engine cradle, it weighed only 278 pounds—49 percent less than the basic steel unit. 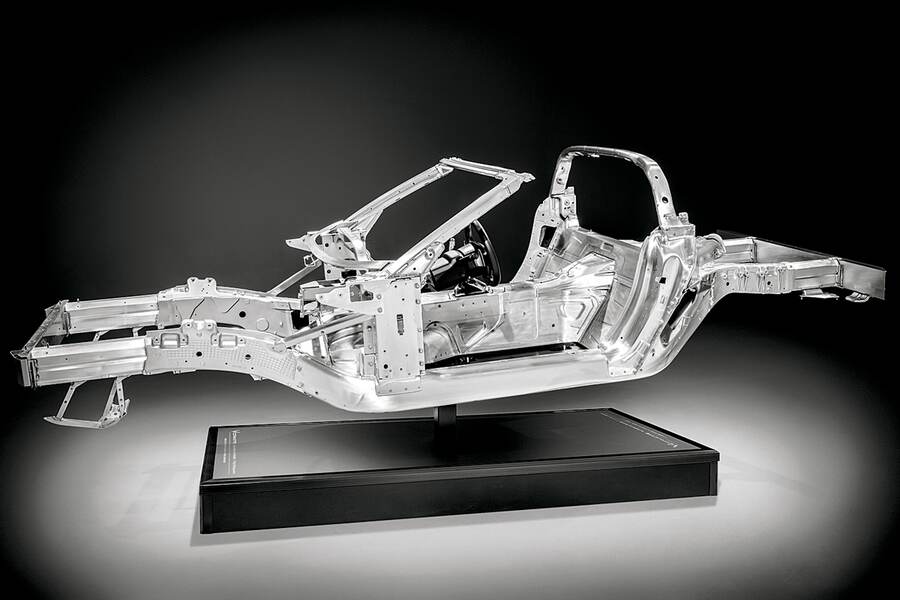 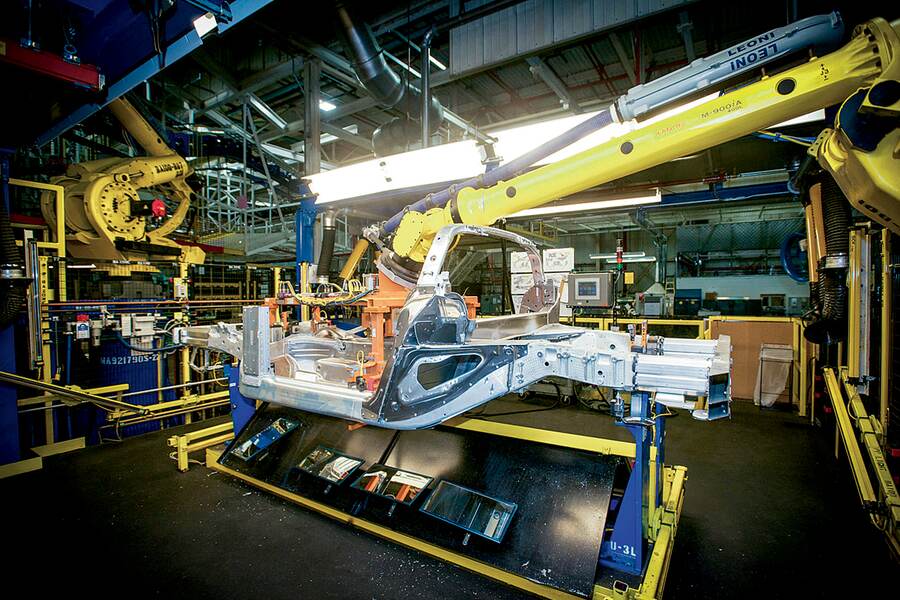 The C7 brought aluminum frame construction in-house at the Bowling Green Assembly Plant, including about 60 new robots in the body shop that weld, install fasteners and apply structural adhesives. 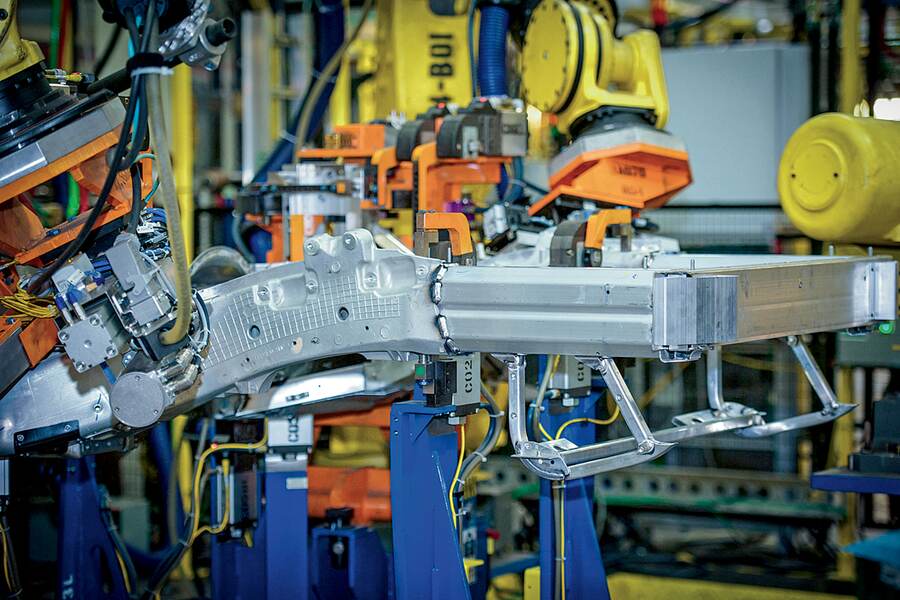 Additionally, the C7’s chassis construction is overseen by high-definition cameras. These help measure tolerances as minute as 0.0004-inch, for unprecedented manufacturing precision on a Corvette. 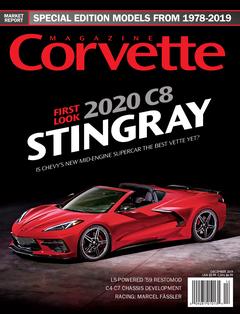