After decades of dreaming about it, Chris Mazzilli was able to create the 1983 Corvette that never was 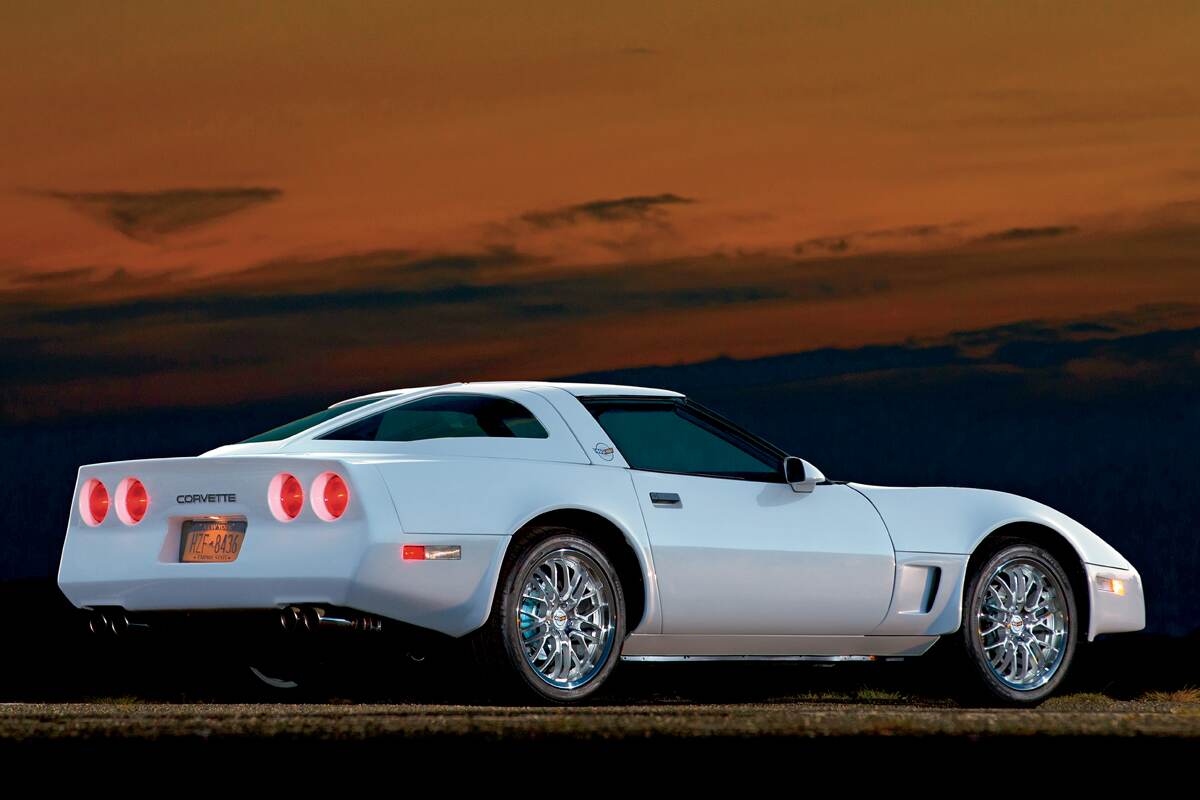 For the first two decades of its existence, Corvette improved in nearly every measure at an exponential rate. Though engineering and styling occasionally clashed, both with each other and with GM’s money managers, they were otherwise free to propel the car forward. All of that changed by the early 1970s, when federal and state governments began to impose increasingly stringent noise, fuel-economy, emissions and crash-worthiness mandates on the auto industry. This dramatically shaped the development curve of all vehicles, including Corvette, and played a key role in the scheduling of the fourth generation’s introduction.

These struggles to meet governmental requirements were not the only factor that influenced the timing of the C4. The age-old conflict between styling, which wanted a mid-engine machine, and engineering, which wanted to stay the course and optimize the traditional front-engine configuration, also slowed progress on the new Corvette. And the car’s strong sales growth throughout the 1970s, in spite of decreasing performance and increasing prices, did nothing to encourage top GM management to invest in the creation of a true “next-gen” model. Ironically, work finally started on the C4 late in the 1979 model year, which to this day remains the all-time highest production year for Corvette at 53,807 units.

With all of these powerful forces conspiring against the timely completion of an entirely new Corvette, plus quality-control issues and parts-supply problems that further aggravated the situation, it’s not surprising that the C4 was significantly delayed. By the time regular assembly of the new car finally began on January 3, 1983, about one-third of the normal production year was over. Faced with having either a shortened 1983 model year or an extended 1984 season, Chevrolet General Manager Robert Stemple chose the latter path, a decision made possible by the fact that the new C4 met 1984’s stricter emissions requirements. 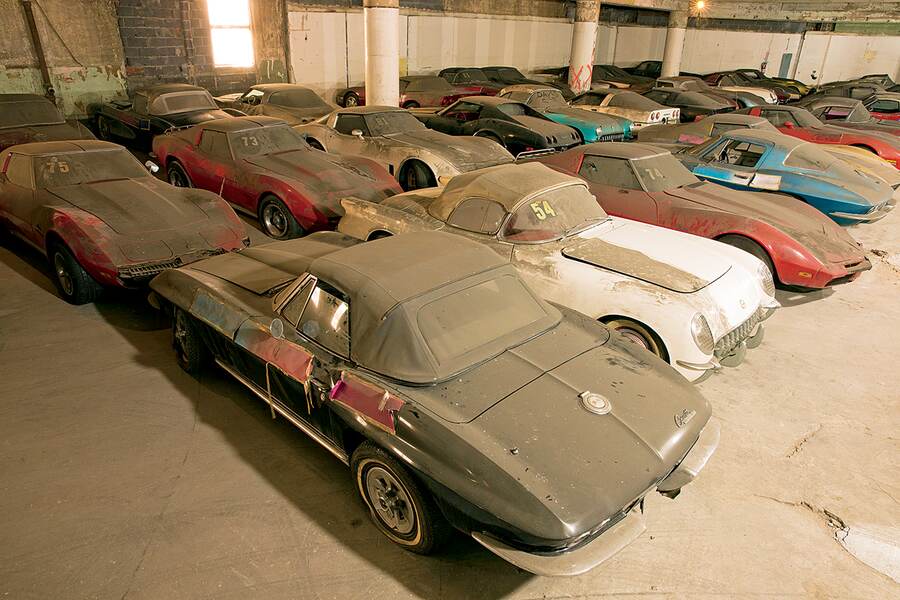 The Peter Max collection as “discovered” in 2014.

The introduction of every new-generation Corvette causes some measure of anxiety for enthusiasts, but some fans are more deeply affected than others. Noted Corvette collector Chris Mazzilli was particularly distraught when Chevrolet skipped over model year 1983 and delayed the introduction of the fourth-gen model. Mazzilli’s dad worked for Chevrolet dealerships in the 1950s and ’60s, so it’s not surprising that he has been car-obsessed his entire life. Having been fascinated by automotive styling since he was a young child, he fantasized about the “lost Corvette,” the 1983 that never was, and spent countless hours doodling and daydreaming about what it could have been. This ultimately led to his vision of a C4 that bridged the gap between past and present, with cues to evoke key styling elements from prior-generation Corvettes.

That vision rattled around in Mazzilli’s head for more than 30 years, until an unlikely chain of events finally put him in a good position to bring it to fruition. In June of 2014, he was displaying one of his prized Corvettes, a completely original ’71 NCRS Five Star Bowtie Award winner, at an event in New York. The car caught the attention of a man named Peter Heller, who began asking Mazzilli a lot of questions about a lot of different Corvettes. “After he asked me about many different years, and then a few questions about a 1953 and a ’55, I had a pretty good idea what was happening,” Mazzilli recalls. “There aren’t too many large-scale Corvette collections that include both a ’53 and a ’55, so I asked whether he was looking at the Peter Max cars, and he was stunned that I would know anything about [them].”

As many Corvette Magazine readers will recall, in 1989 cable-TV channel VH1 gave away 36 Corvettes covering every year of production from 1953-1989 to a single person in a monumental promotion. Long Island carpenter Dennis Amodeo was chosen at random by an AT&T computer from among the 1.4 million people who entered the contest. Amodeo quickly sold the entire collection to pop artist Peter Max, who said he had a dream about the cars after a friend told him about the Corvette giveaway. Max intended to paint each car in his signature colorful style, but beyond taping paper onto some of the cars and scrolling design ideas on the paper, the project stalled. The cars went into long-term storage in the bowels of a New York City parking garage and were eventually forgotten about by almost everyone. 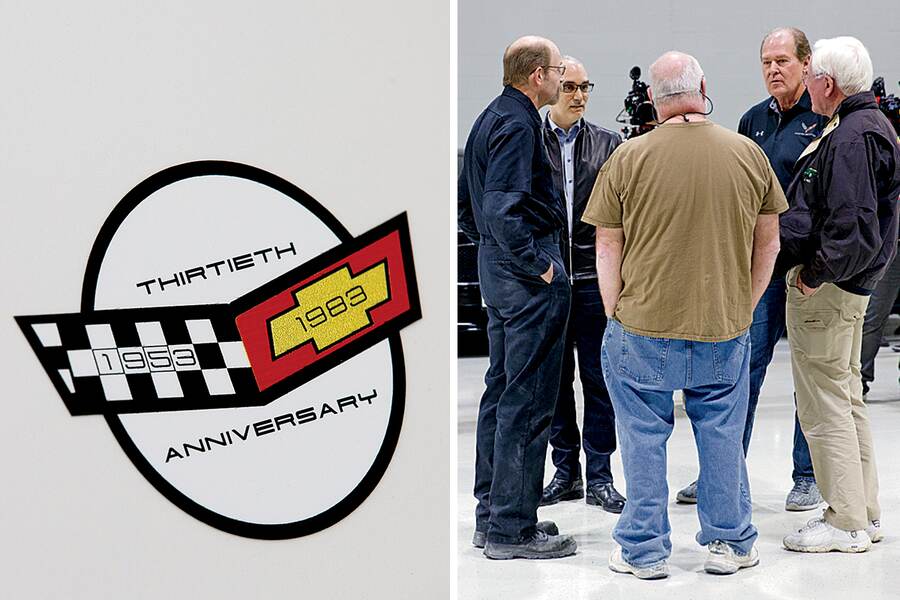 On hand for the ’83 reveal were (left to right) Paul Kuhl, Chris Mazzilli, Dave Weber, Rick Darling and Dave McLellan.

Several relatives of Peter Heller manage parking garages in New York, and in 2014 they found themselves in a position to buy the entire collection. That’s why Heller was asking Mazzilli so many questions about so many different-year Corvettes. Mazzilli’s obvious expertise led the people interested in buying the collection, a group comprising members of the Heller and Spindler families, to hire him as a consultant. Mazzilli and Dave Weber, a restoration expert with some 40 years of hands-on experience, spent untold hours examining the Max cars and advised the Heller/Spindler group regarding what they needed, and how much they were worth. After much discussion, the Hellers and Spindlers were not sure what they’d ultimately do with the cars, but the idea of rescuing them from their present state of neglect held great appeal. A deal was struck, and the new owners took possession in July of 2014.

The Spindler/Heller group ultimately decided to bring all of the Corvettes back to life and give them away in another sweepstakes, with a portion of the proceeds benefiting the National Guard Educational Foundation. Unlike the original VH1 promotion, however, the next contest would see each car given away separately, with 36 individual winners instead of just one.

Filling in the Blank

Mazzilli, who owns the Gotham Comedy Club in Manhattan and has deep roots in the entertainment industry, thought the whole story of the VH1 contest, the entombment of the collection, its emergence 25 years later and its resurrection was compelling enough for a TV show. He and the new owners of the Max Corvettes enlisted the help of a production company called Bungalow Media + Entertainment, which is owned by a gentleman named Bobby Friedman. Friedman was an original member of the startup team at MTV, and the man in charge of VH1 when the epic Corvette giveaway took place in 1989. He knew as well as anyone how much interest the cars created back then—and would undoubtedly generate again. 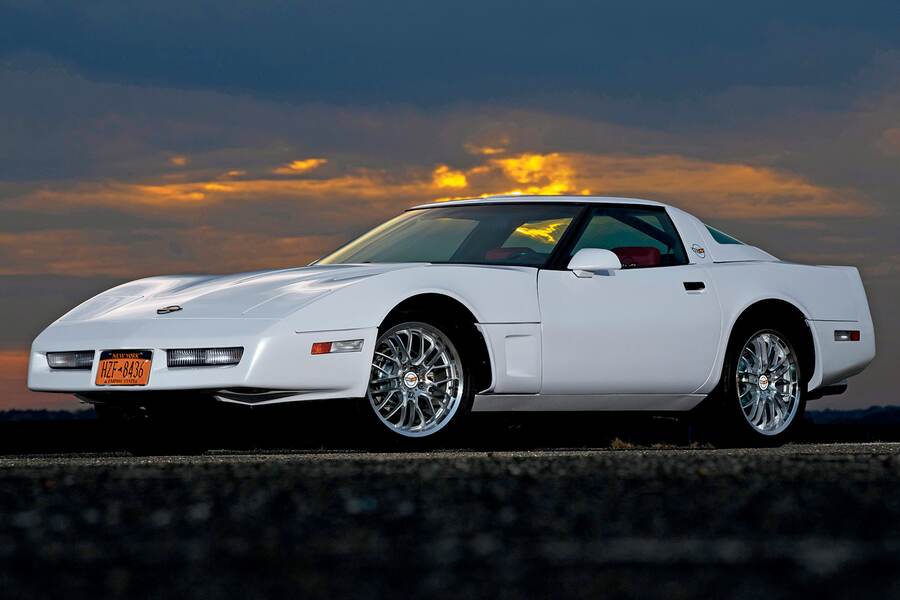 Most notable from this angle are the exaggerated fender arches, inspired by the ’73 model.

Mazzilli, Friedman and the Heller/Spindler group took the idea of a show about the Corvette collection to A+E Networks. The network agreed that the story would make for a great program, and production quickly got underway for a show to be broadcast on History (popularly known as the History Channel) in the summer of 2019. In that same initial meeting, network executive Jordan Harman was intrigued by the missing 1983 model and felt there was also a show in that idea, especially since such a car would

“complete” the Heller/Spindler collection. Mazzilli thought the same, and luckily he had 30 years’ worth of ideas regarding how to build the car that never was. That day, History commissioned The Lost Corvette to air during its third annual Car Week in July 2019.

Working with the crew at Bungalow Media, Mazzilli was tapped to develop the concept and oversee production, which would take place at his restoration business, Dream Car Restorations in Hicksville, New York. In 2017 the Dream Cars staff, led by Mazzilli and Dave Weber, began the challenging task of transforming Mazzilli’s design ideas into reality. 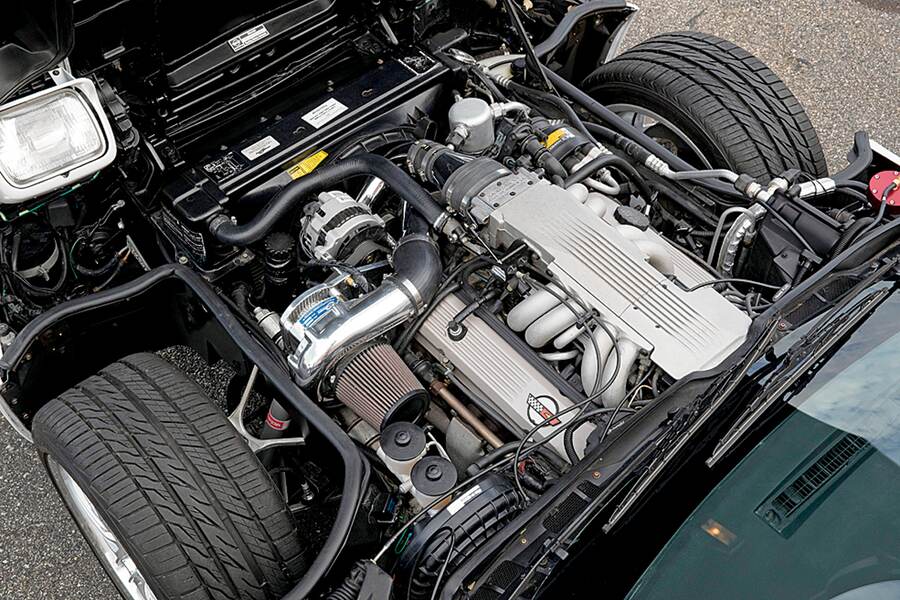 “I wanted the finished ‘1983’ Corvette to look like a factory car,” Mazzilli explains, “like something Chevrolet could have actually built, not like a wild custom.” As a guy immersed in both the business of car restoration and the entertainment industry, Mazzilli had a lot to lose if he and his team failed. Besides the Bungalow production crew, who would be there day in and day out to record everything that happened, and the network executives overseeing the process, the final product would ultimately be judged by three individuals with their own strongly held opinions regarding car design: retired Corvette Chief Engineer Dave McLellan, retired Chevrolet Senior Development Engineer Rick Darling and History’s Counting Cars star Danny “The Count” Koker.

To get the project underway, Mazzilli acquired a sad-looking but solid 1985 coupe. The reasoning behind choosing a second-year C4 rather than an ’84 was simple: The ’85 model year saw the introduction of the Tuned Port Injection L98 engine, which was far superior—both in performance and efficiency—to the rudimentary CrossFire Injection L83 used in 1984. In keeping with the vision to create a 1983 that looked like it could be a factory car, with styling cues from previous generations integrated with the C4 design, Mazzilli and his team at Dream Cars worked out a plan of attack.

“Since 1983 was the 30th anniversary year for Corvette, we decided to focus on elements of design from 1953, 1963 and 1973,” Mazzilli says. “To honor first-year Corvettes, which were all Polo White with Sportsman Red interiors, we went with the same color scheme, but with pearl white because pearl is the traditional gift for 30th anniversaries. 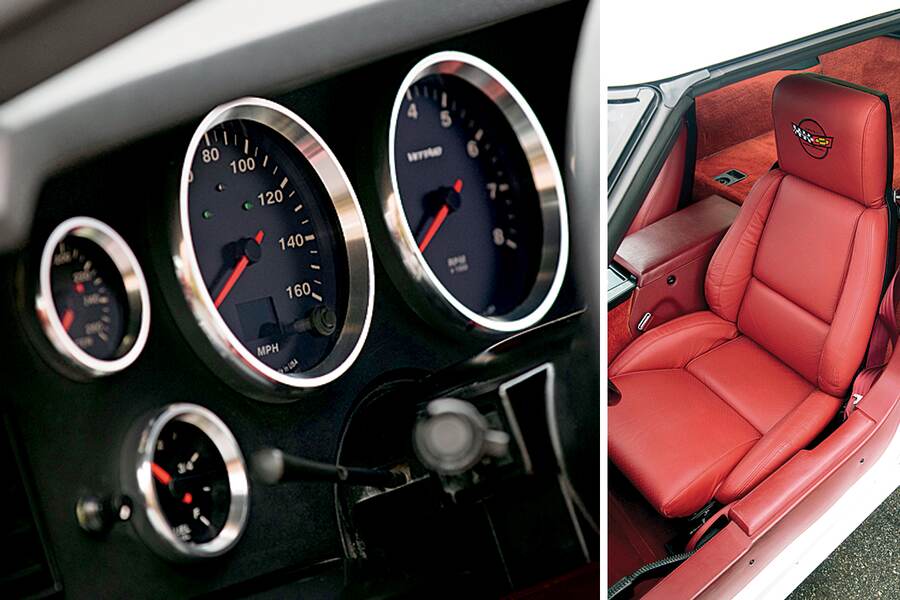 No “hockey sticks” here: Full analog instrumentation represents a welcome change over the busy, failure-prone ’84-’89 instrument panel. Inside, the “30th Anniversary” theme carries over to the seat headrests.

“Of course, the iconic design feature from 1963 is the ‘split’ rear window, so we worked out how to incorporate that into our build with the right proportions so it looked great. That was not an easy task, because the rear window in a C4 is almost 40 percent larger than the rear-window area in a ’63. We struggled with that until one of our best techs, Bill Doty, figured it out.

In addition to all of the design changes, Weber, Doty, Paul Kuhl and the rest of the team at Dream Car Restorations also took steps to improve the car’s performance. By the time the C4 was introduced, Chevrolet Engineering had finally turned the tide on engine output and all-around car performance, thanks to advancing technologies that addressed ever-increasing noise, emissions, fuel-consumption and safety requirements. Still, the ’85 Corvette’s 230-horsepower output rating was a long way off from the numbers achieved in the 1960s and early ’70s. 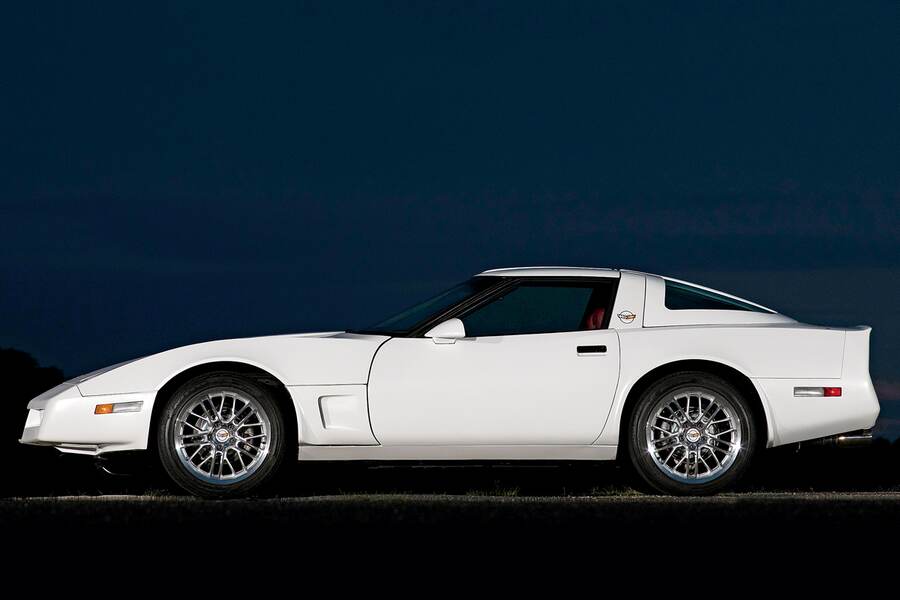 “We addressed that [disparity] with the addition of a ProCharger P600B supercharger and intercooler, a Hypertech E-PROM chip and a low-restriction exhaust system,” says Mazzilli. “All together, these changes increased the engine’s output from 230 horsepower to a little more than 500.”

All of the work was completed on schedule, and in April 2018 the transformed car was unveiled to an audience that included McLellan, Darling, Koke and a few dozen of Mazzilli’s friends and family members. Upon seeing Mazzilli’s creation, McLellan commented, “You’ve done a superb job, and need to be celebrated for that.”

“The thing I like about it, probably the most, is the split window,” said Darling. “I had a ’63…and yeah, I really like [this treatment]. It’s not overly done—the cues are subtle.” 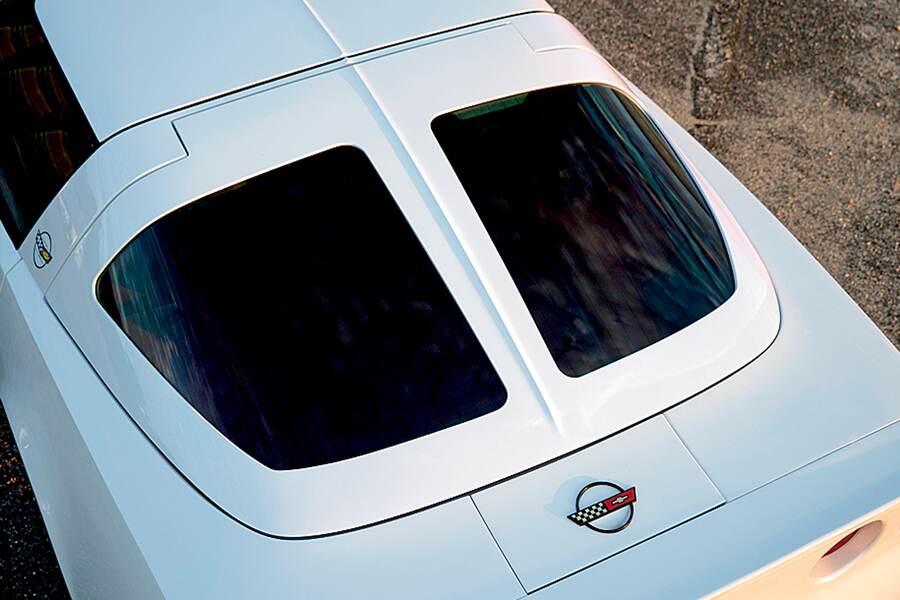 “You did an amazing job,” added Koker. “This ’83 would have been, to me, that transitional year because we’re seeing the future of the C4, but you still have some flavor of the past. It has a lot of very nice touches, and I like it a lot.”

The high compliments from McLellan, Darling and Koker had Mazzilli, Weber, Doty and Kuhl all floating on a cloud, but the words that meant the most to Mazzilli came from his mother: “Son, this is beautiful, and we’re very proud of you.” 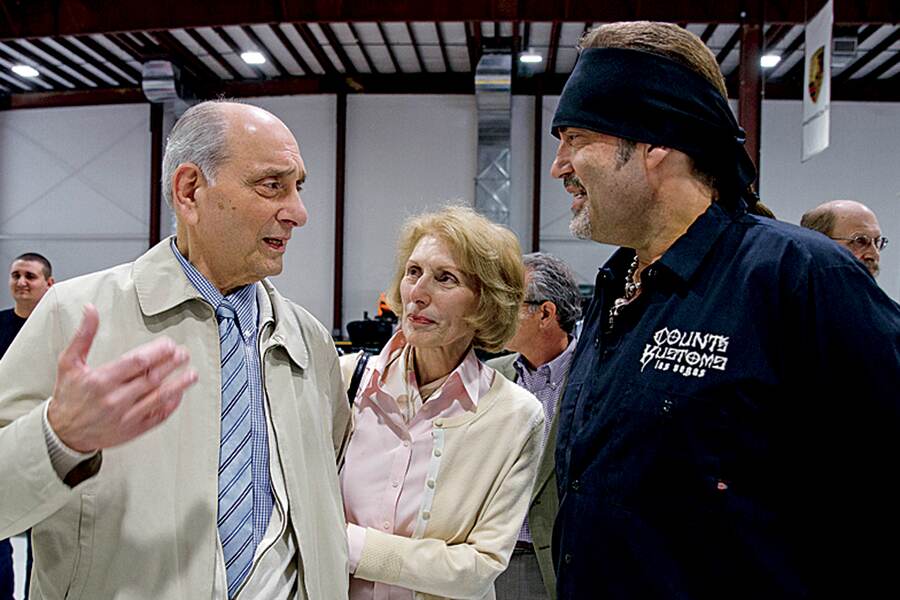 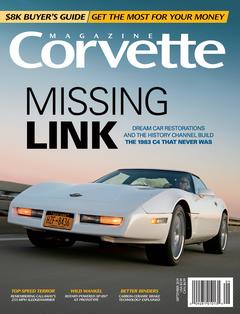