When Corvette performance hit a wall in the mid-1970s, Greenwood and American Custom Industries devised a creative workaround 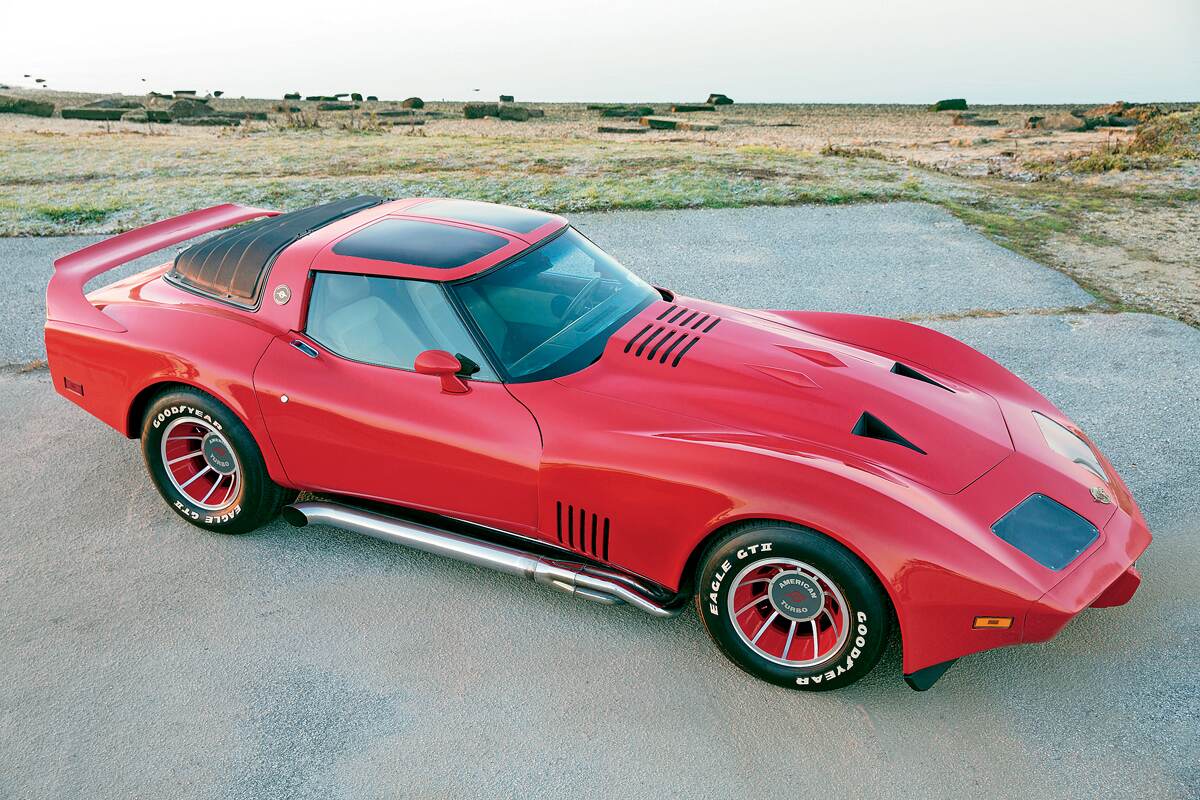 Were it not for a talented group of men and women with big dreams and the ambition to achieve them, Corvette would never have been created in the first place. Over the decades, Chevrolet’s iconic sports car returned the favor by inspiring others to dream big, none more so than John and Burt Greenwood. Though perhaps best known for their wide-body, big-block C3 racecars, the Greenwood brothers were also responsible for dozens of high-performance street cars bearing their name, and in some cases the names of others they influenced, including Bob Schuller, founder of American Custom Industries.

Schuller was an engineering student at the University of Toledo, headed toward a career in architectural engineering just like his father until a car crash in 1966 changed the direction of his life. Schuller’s damaged 1962 Corvette needed a fiberglass virtuoso and he couldn’t find one, so he decided to fix it himself. He read everything he could about the science underlying glass-reinforced plastic and then dove in head first, ending up with a car that looked far better than new.

In fact, the results were so impressive that others asked him to fix their Corvettes, and in short order, Schuller had a thriving part time Corvette repair business going in his parents’ garage. When he outgrew that workspace, he made a fateful decision to put his engineering studies aside and open his own Corvette specialty shop, called American Custom Industries (ACI), in Sylvania, Ohio, a suburb of Toledo. 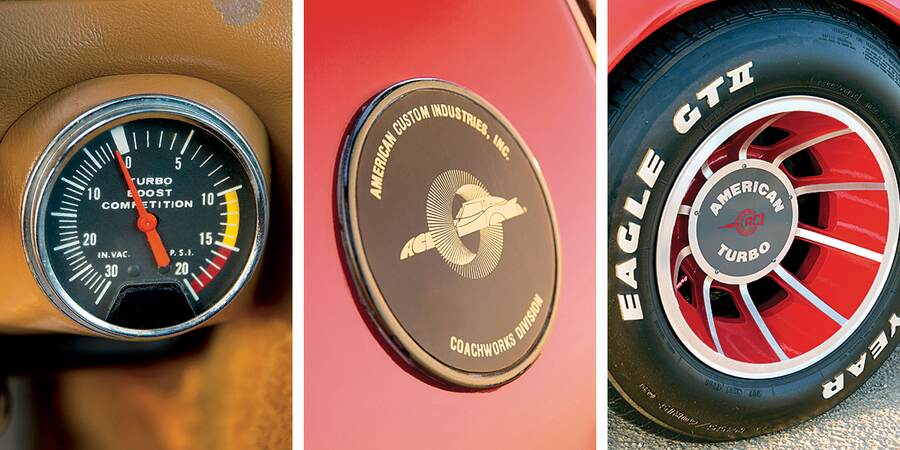 ACI grew steadily, and by the mid-1970s Schuller had forged an alliance with Greenwood International, producing the custom Corvette body panels used to build the company’s Sebring GT and Turbo GT street cars. Later, he began assembling complete cars on behalf of Greenwood. For reasons that have become cloudy over time, the relationship between ACI and Greenwood came to an unceremonious conclusion in 1978 or early ’79, at which time ACI began selling modified Corvettes on its own. Virtually identical to Greenwood’s Turbo GT, Schuller’s offering was called the American Turbo.

As was typical, the car was powered by a base L48 engine, which was preferable for the turbo conversion because of its lower compression ratio compared with the optional L82. The motor originally sent its twist to the drive wheels via a Turbo Hydramatic automatic, but ACI replaced that with a five-speed manual gearbox, presumably at the behest of the original buyer. 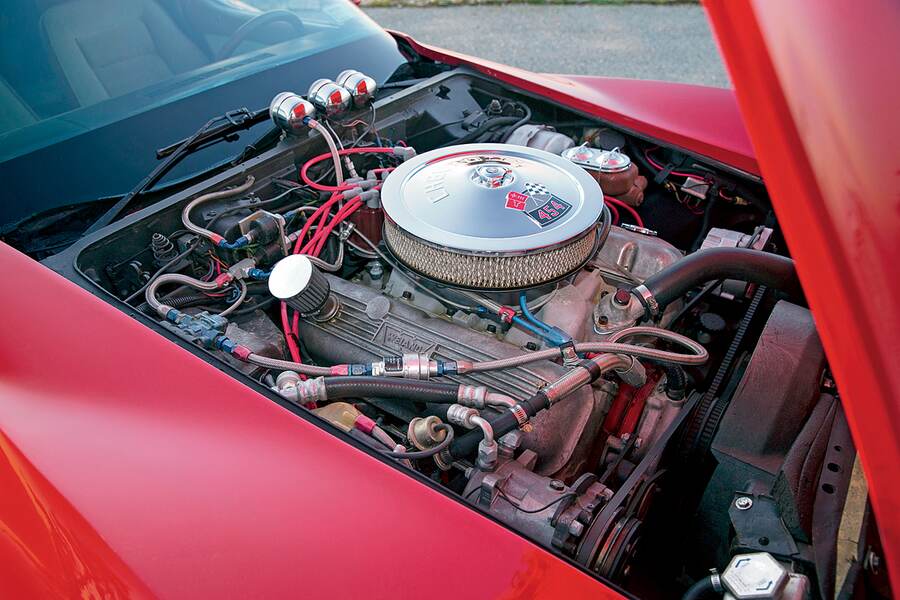 When this car’s original 260-hp turbo 350 failed under warranty, it was replaced with a naturally aspirated 454.

ACI also fitted a complete wide-body kit on the car, with quarter panels and front fenders that feature well thought-out venting used to cool the brakes and other components. As with all of the wide-body designs Greenwood and ACI produced, the doors were widened substantially to flow seamlessly into the massive quarters. The Corvette’s stock hood gave way to a “turbo hood” featuring twin NACA ducts and a large central bulge with 10 cooling slots at the rear. The shape and size of these slots closely match the ones at the rear of the front fenders.

The new-for-’78 fastback-style rear window was turned into a functional hatchback, a feature not seen on production Corvettes until the 1982 Collector Edition, and “moonroof” glass panels were installed in the factory T-tops. At the rear, a full-width, one-piece wing with an upturned trailing edge mounted to the extended rear quarter panels. Up front, Plexiglas-covered fixed headlamp assemblies replaced the stock pop-up lamps.

As with most of the Greenwood and ACI street cars, 10-inch-wide, 10-spoke American Racing Vector rims were used to fill the extra-wide wheel wells. Goodyear Eagle GT II tires, sized at P255/60R15 in front and P275/60R15 in the back, replaced the car’s comparatively narrow factory rubber. 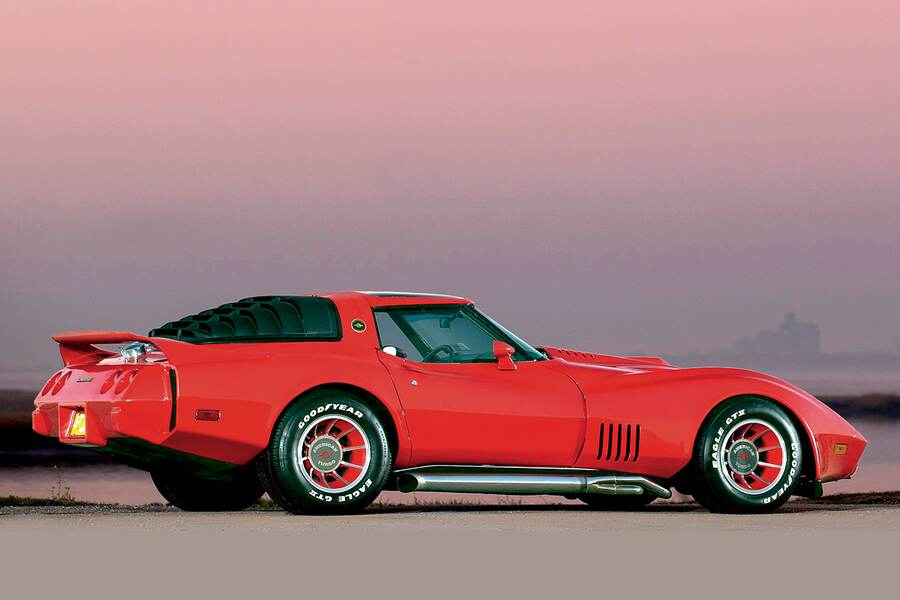 Something that distinguished Greenwood and ACI Corvettes from many other custom cars of the era was the serious nature of the performance upgrades they received. This was a crucial selling point given the steep drop in the performance of factory Corvettes that took place in the 1970s. Power output for Greenwood Turbo GTs and ACI American Turbos was, of course, increased significantly because of their forced-induction system.

By the mid-’70s the benefits of turbocharging were well known, and in fact Chevrolet was actively testing turbos in Corvettes during that time period. Though it would be a decade before Chevy offered a turbo-engine option in the form of the B2K Callaways, Greenwood and ACI brought their force-fed Corvettes to market in ’78.

The Greenwood system featured an Air Research T04 turbocharger and wastegate, with the turbo mounted to a bespoke right-side exhaust manifold that Greenwood had cast. A crossover pipe linked the right manifold to the left one, and another pipe routed the turbo’s waste gas into the stock exhaust system. Pressurized air from the turbo was channeled into a Holley 650-cfm carburetor by means of a cast-aluminum housing that sat on top of the carb. 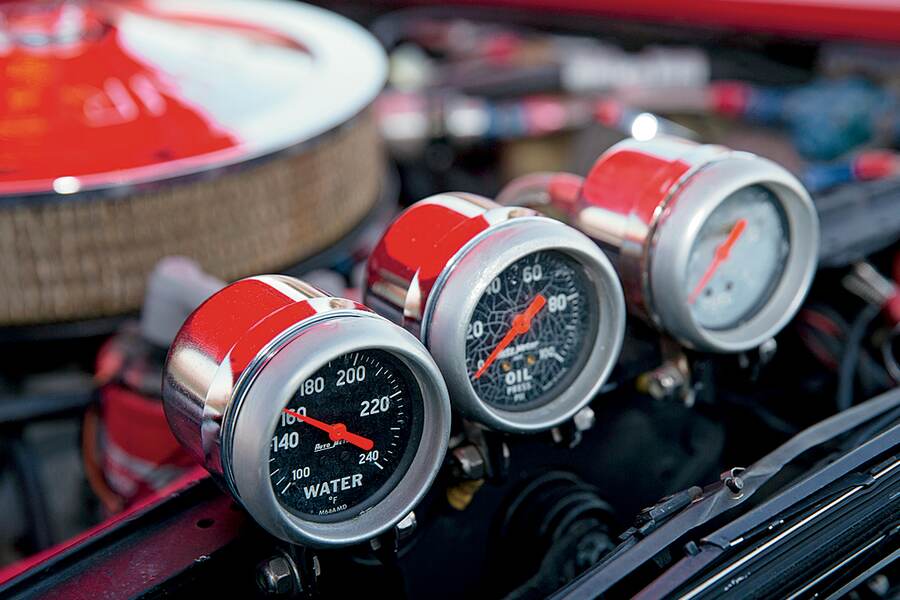 Another important performance upgrade applied to some Greenwood and ACI Corvettes, including our subject car, was Greenwood’s extensively modified suspension. The real magic was in the rear, where the factory trailing-arm setup in use since 1963 was replaced with a highly effective five-link system based on a design Bob Riley penned for Greenwood’s racecars in 1973, and refined further in subsequent years. This configuration used the stock hub in a fabricated carrier supported by two trailing, two lateral and one upper link, along with a Koni coil-over shock absorber.

The front suspension was also modified, though not to the same extent as in the rear. The stock steering box was reworked, higher-rate springs were installed and a larger-diameter anti-sway bar took the place of the stock piece.

There was no set specification for the interior of Greenwood or ACI cars, so they varied from one to the next, with some cars getting almost no modifications and others getting extensive alterations. Our feature car’s interior was changed from its original black to tan, and numerous custom features were added by ACI. These include velour seat upholstery and 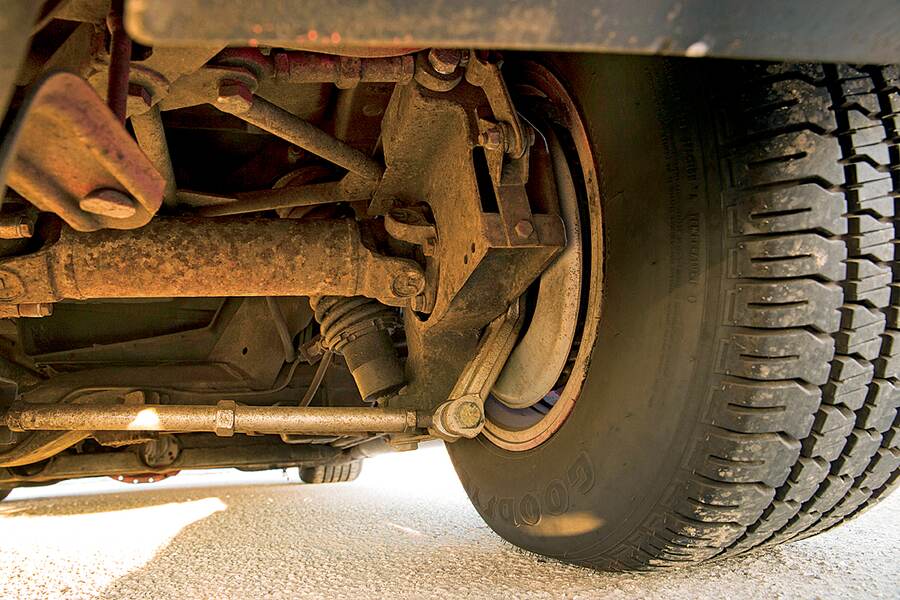 Though our feature car has obviously evolved over time, most notably with the substitution of a 454 for its original turbo 350, and an exterior color change, Larry Spatz is thrilled to call it his own. When he was a youngster, two cars he saw almost every day stirred his passions. The first was a custom, wide-body ’81 Pontiac Trans Am that one of his high school classmates owned. The second was a red ’81 Corvette with a tan interior that he walked past on his way to and from school every day. He dreamed about owning a car that combined the most striking elements of the two, namely a bright-red wide-body Corvette with a tan interior.

Spatz’s first Corvette was an ’82 Collector Edition, and his second was a white-on-red ’80 that needed some work, which he enjoyed doing himself. The two C3s looked lovely in his garage, but neither was the Corvette he really wanted, so he always kept his eyes open for his dream car. Then, one day, just such a car materialized for sale at a Florida dealership. The only problem, according to Spatz, was the unreasonably high price. 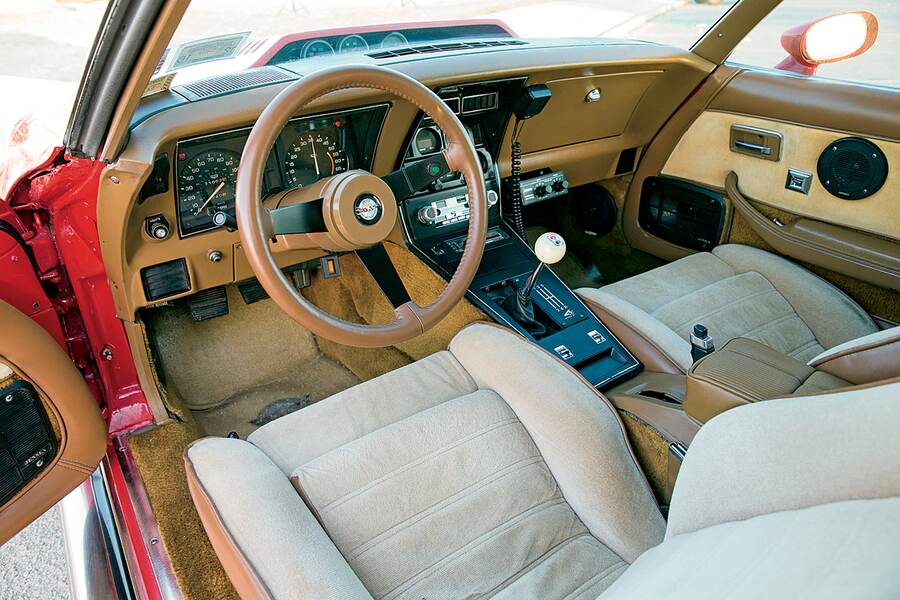 “It was priced tens of thousands more than what I thought was fair,” he recalls, “so I didn’t even pursue it, but the car stuck in my head. A few years later, I saw the same car for sale by the same dealer on the Internet, priced much lower but still too high. I contacted the dealer and made an offer, but he declined it.”

Not long after, the Corvette turned up on the Web again, this time on an auction site. Spatz called the dealer with another offer but was again rebuffed. Eventually, with his prospects for a top-dollar sale fading, the seller relented. “The car didn’t meet the auction reserve, and a few months later the dealer called me…and we finally agreed on a price. I sold my other two Corvettes to finance the purchase.”

Spatz subsequently did some research and was able to determine that he is the car’s fourth owner. He was also able to speak with owner number three, who filled him in on the car’s history back to the beginning. According to this gentleman, two brothers who were in the lumber business in Florida bought it new and later blew the engine. Because the powertrain was still under warranty. ACI gave them the option of a new turbo motor or a new 454, and they chose the latter. 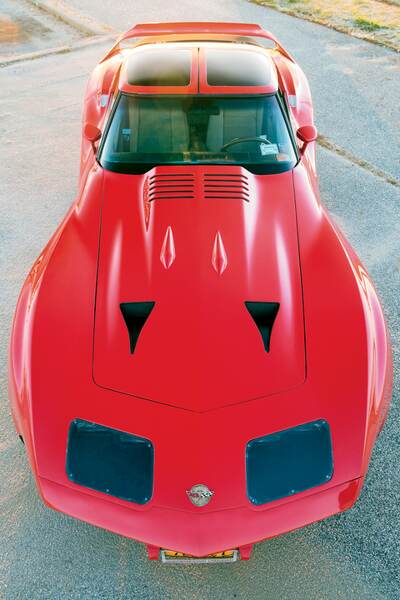 Though they may resemble mere cosmetic filigree, many of ACI’s body modifications were in fact functional. NACA ducts in the hood fed air to the engine, while top and side slats removed heat.

Spatz also learned that the originally black Corvette was given a “wild” custom paint scheme by ACI, but this got damaged when the first owners drove the car on a dirt road, so they went to the opposite extreme and had it repainted white. The car remained that anodyne color for nearly 30 years before being re-sprayed in its current vibrant shade of red by the Florida dealer from whom Spatz bought it.

Like all of the Greenwood and ACI street cars built in the 1970s and ’80s, this American Turbo is a reflection of the era that spawned it. Increasingly stringent emissions and safety mandates from the federal government severely diminished the performance of new cars, and that in turn encouraged entrepreneurs in the aftermarket to fill the void. These supercars from a bygone era may be somewhat tame compared with today’s mega-horse tuner Vettes, but there’s still keen interest in them among collectors, including Larry Spatz, who absolutely adores his one-of-a-kind wide-body C3. 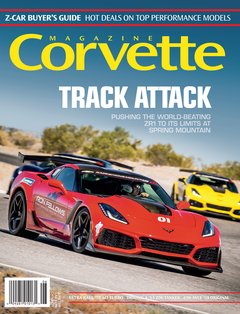