To send off the C4 in style, Chevy cooked up two special versions of this long-running model for 1996 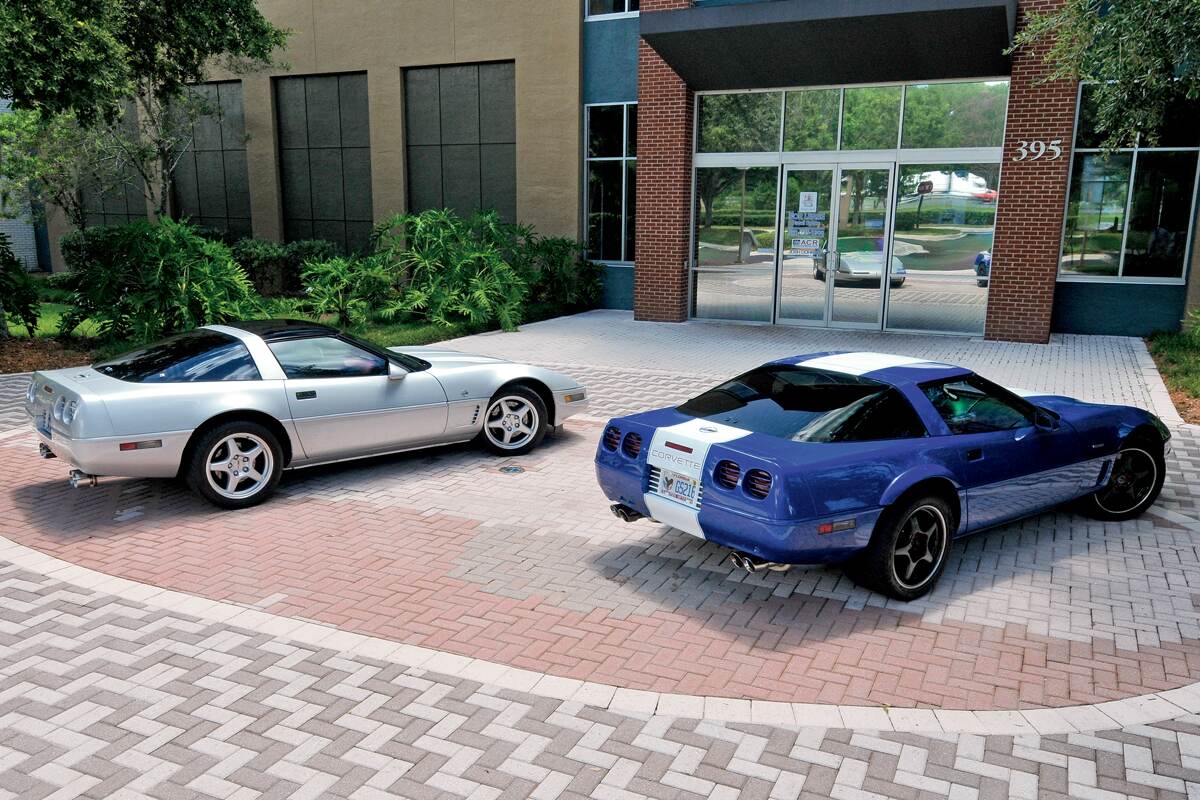 Dozens of behind-the-scenes decisions shaped the direction of the fourth-generation Corvette as it rolled into its sunset years in the mid-1990s. Buyers knew that ’96 was to be the last year of C4 production, and many were waiting for the first iteration of the upcoming new model. GM, for its part, wanted every Corvette offering to be more profitable than the last, so it threw down the sales gauntlet for the design and engineering teams. It was a huge challenge, since the C4—of which some 350,000 had been built—was continuously refined throughout its 13-year production run, meaning any final-year updates would need be meaningful and memorable. That’s when the idea of resurrecting the iconic Grand Sport name began to gain traction.

The team was hoping to trade on the reputation of a car that had been track-savvy enough to take down Carroll Shelby’s vaunted Cobras more than three decades earlier. Scheduled to debut at the 1963 Sebring 12 Hours (which it did) and later tackle Le Mans (which it did not), the factory-sponsored Grand Sport program never reached its full potential thanks to the corporation’s untimely retreat from racing. But while the Grand Sport’s time was brief, its accomplishments were legendary. Accordingly, the people responsible for the C4 felt that if they could link a new car to the success of the original, they might win over some of those on-the-fence buyers.

Accomplishing the task was fraught with difficulties, not least because the original Grand Sport was a genuine racecar with virtually every performance parameter maximized. Weighing in at less than a ton, the car used a lighter fiberglass body, Plexiglas windows and an aluminum tubular space frame. Fender flares allowed fat tires that maximized the track-tuned suspension. Propelling the beast was a 377-cubic-inch small block V-8 said to produce around 550 horsepower, more than enough for consistent checkered-flag finishes. The multiple slots and scoops were functional, keeping internal components cool while projecting a decidedly aggressive aura. Designing the first production Corvette impressive enough to be worthy of the Grand Sport name, and then getting it over a long list of regulatory and production hurdles, was sure to be daunting. 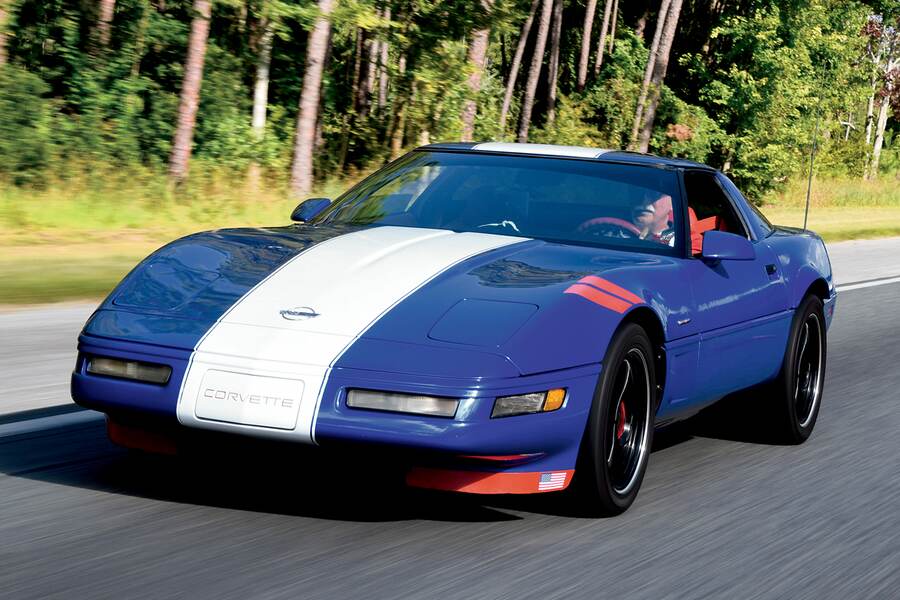 Even before they could begin, Corvette Chief Engineer David Hill and company hit their first obstacle. The projected build volume of 1,000 cars was so low that it did not translate into a profit. And so the development team devised a creative solution by which the limited run of Grand Sports would be paired with an unlimited run of a separate ’96 special edition. It was a groundbreaking approach, since GM had never produced two very different special versions of the Corvette in the same model year. The idea solved the cost-effectiveness issue, and the team got the go-ahead. Now, all they had to do was make it work.

Crafting the car that would come to be known as the RPO Z15 Collector Edition was fairly easy, beginning with a Sebring Silver paint scheme that came with assurances that it would not be used on the following year’s C5s. Model-specific badges, silver-painted 17-inch aluminum wheels (similar in style to those used on the C4 ZR-1) and Collector Edition embroidery for the silver-gray leather set the car apart from other ’96 Vettes. Buyers could choose between the standard LT1 motor, paired with a 4L60E automatic transmission, or the one-year-only LT4, which was a manual-required option (more on that shortly). At a cost of $1,250, it was a handsome but readily accessible package.

While the Collector Edition went together without issue, crafting the Grand Sport version was to be a much bigger challenge. Initially, the design team might have had the easiest task, whipping up a historically faithful Admiral Blue exterior with a white stripe down the middle, along with a pair of red hash marks on the left front fender. Chrome Grand Sport badging on each side of the hood, a chrome Corvette emblem on the nose and gas-filler lid, and embroidery on the black or red-and-black leather interior completed the look. 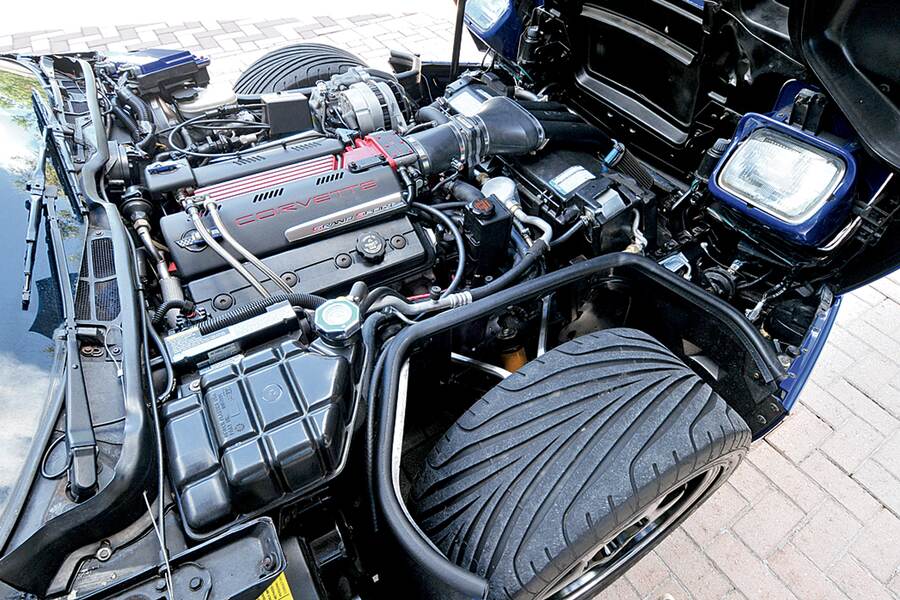 Next, engineering came on board with the aforementioned LT4 engine, which featured numerous upgrades over the standard LT1. Although both powerplants shared the same cast-iron block, the LT4 was fitted with injectors rated at 28 lbs/hr, instead of the 24-lbs/hr units of the LT1. The aluminum heads had larger valves and stronger springs that pushed the redline to 6,300 rpm, 600 rpm more than the LT1. Additionally, the LT4 cam had more lift, duration and overlap, and it actuated 1.6:1-ratio roller rockers. (The LT1 used 1.5:1 non-roller arms.) Shallower valve cuts in the pistons raised compression to 10.8:1, compared with the LT1’s 10.4:1. In sum, the modifications bumped output to 330 hp, bettering the LT1 by 30 horses.

To celebrate the higher rev limit, a new, 8,000-rpm tach appeared on the dash. All Grand Sports came with a six-speed manual that sent power to a 3.45:1 rear end. Handling enhancements began with export-market flares (on coupe models only) and ZR-1–style, black-spoke wheels with a custom offset that allowed the use of wide Goodyear Eagle GS-C rubber. These tires measured P275/40ZR-17 on 17×9.5-inch wheels in front, and a steamroller-wide P315/35ZR-17 on 17×11-inch wheels in the rear. (A slightly smaller rim-and-tire combination was used on the convertible.) The car’s standard Z51 Performance Handling Package included firmer Bilstein shocks, springs and bushings.

Taken together, the changes applied to these two valedictory C4s added up to a successful send-off for the long-running model. All 1,000 of the Grand Sports sold (810 coupes and 190 convertibles), while the Collector Edition cars made up nearly 25 percent of the 21,536 Corvettes bought in 1996. 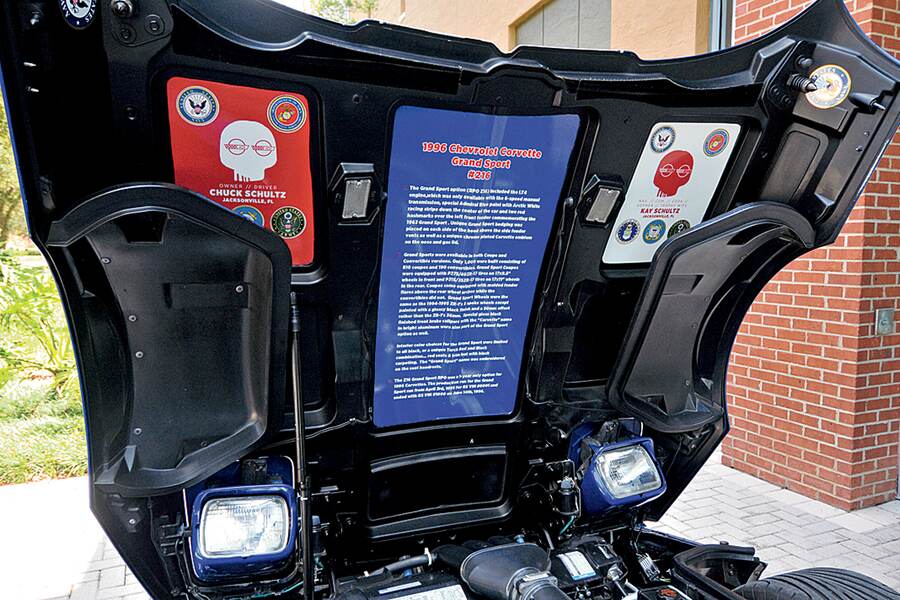 Though the C4 has been out of production for nearly a quarter century now, the car still commands a loyal following of enthusiasts who are drawn to its unbeatable combination of performance, style and affordability. Among these devotees are Kay and Chuck Schultz from Jacksonville, Florida, the couple whose final-year fourth-gens are displayed here. Both of the Schultzes are retired from the Navy, with Kay having served as a Yeoman First Class, while Chuck was a Senior Chief aviation-support equipment technician.

The process of establishing the Schultzes’ status as bona fide C4 aficionados began when Chuck decided after his retirement to make good on a long-term dream. He’d always wanted a Corvette, and in 2004 he had the opportunity to get one, a red ’88 model. After doing his own restoration work, he used the freshened-up car as a down payment on the ’96 Collector Edition that Kay now drives. The LT1/automatic car was in very good shape as acquired in 2008, needing only some minor maintenance to get it roadworthy.

Chuck knew about the pair of specialty Corvette models Chevy built for 1996, and now that there was a Collector Edition was in the garage, he began a concerted search for a Grand Sport. After losing out on a couple candidates located in Texas and Kentucky (well-preserved Grand Sports tend to sell fast), Chuck finally found an Internet ad for a car located fairly close to home. After a three-hour drive the car was theirs, but the almost-100,000-mile car was far from pristine. 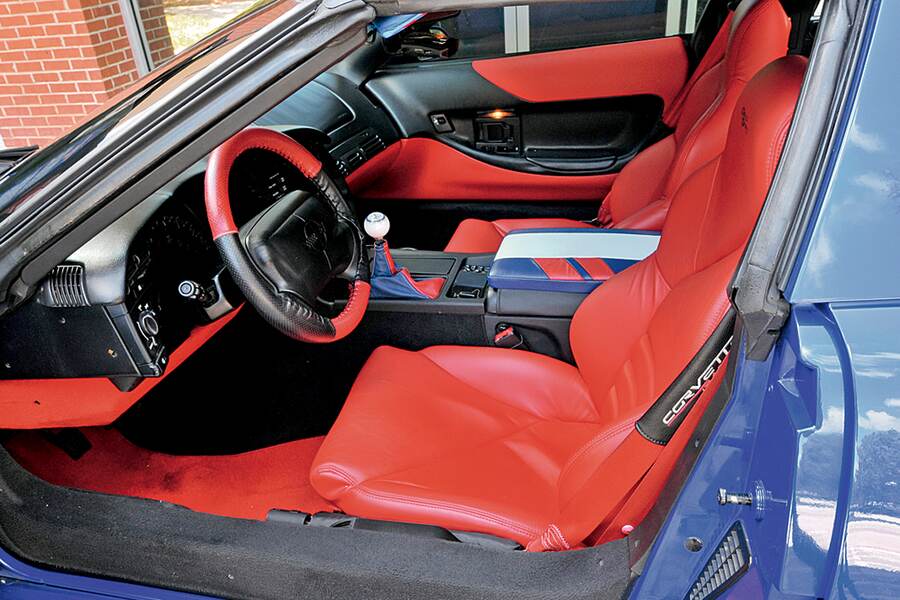 Restoration work began on the new family ride, with Chuck replacing the original radiator, steering wheel and column, and instruments. Another, less common fix involved draining the spare tire, which, oddly, was full of water. (It seems rain had seeped into the fuel-filler compartment and entered the tire through a broken bead.) With that done, Kay and Chuck tackled the interior, recovering the worn bucket seats with new Torch Red leather, spending a day on each one.

The few custom touches applied to the Grand Sport hew to a patriotic theme, comprising a red, white, and blue center armrest and shift boot along with subtle American flags on the front spoiler. Additionally, the shift knob features the seal of the U.S. Navy. Both of the Schultzes’ ’96 Corvettes are equipped with aftermarket “cat-back” exhausts, LED taillights with aftermarket louvers, fresh carpets and modern tires. The Grand Sport also has a custom cold-air intake.

We’re pleased to report that the Schultzes drive and enjoy their C4s, attending five or six Corvette shows and about 20 other gatherings annually. They tend to drive both cars to local shows, but typically take just the Grand Sport to events that require an overnight stay. Though most spectators are drawn to that arrestingly painted tribute racer, those “in the know” appreciate the significance of pairing both of GM’s final-year C4 specials. “They’re both keepers,” says Chuck about the family collection, “and will be mentioned in the will.” 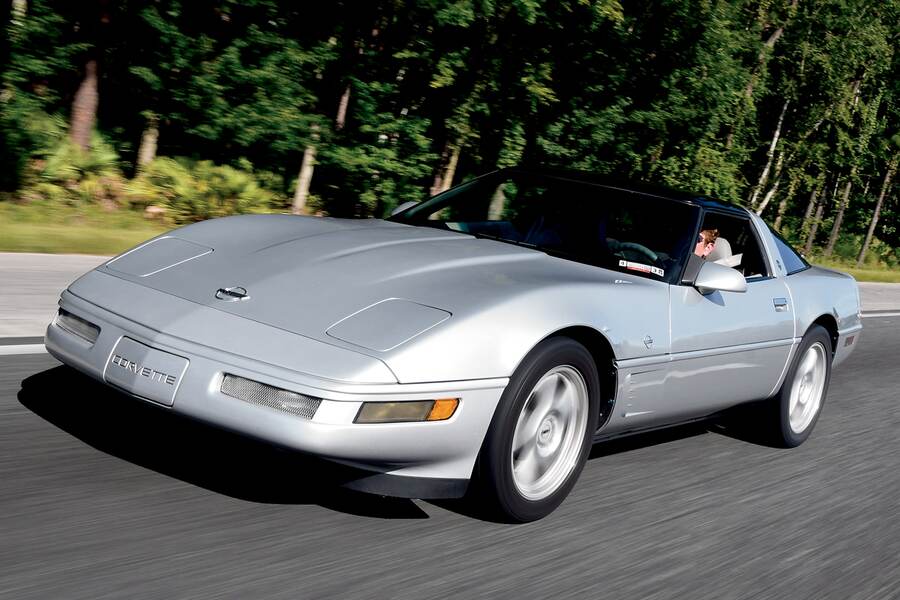 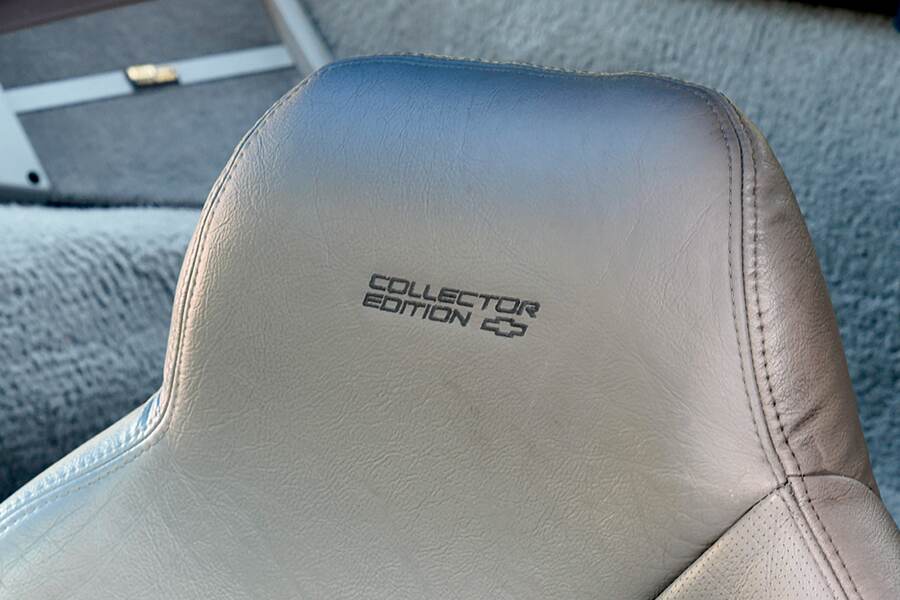 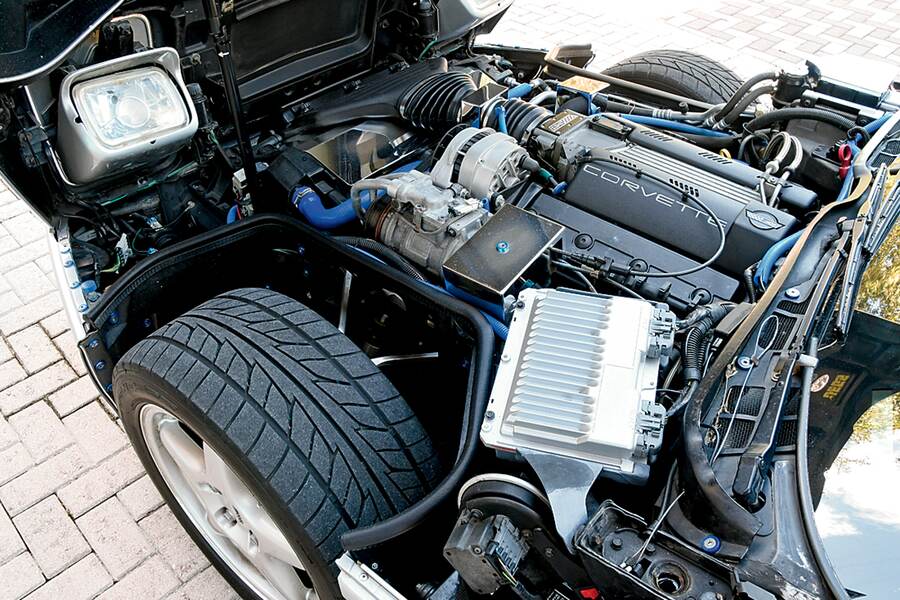 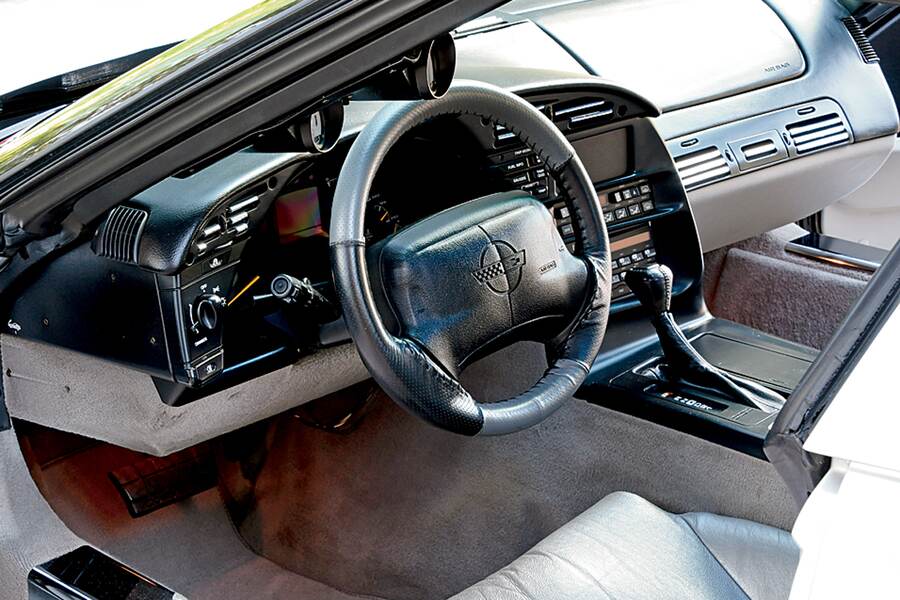 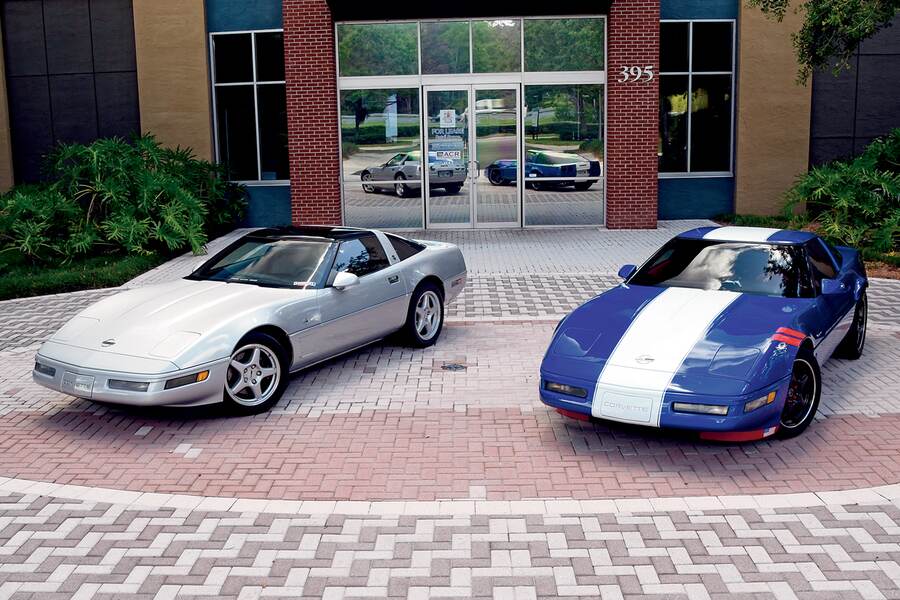 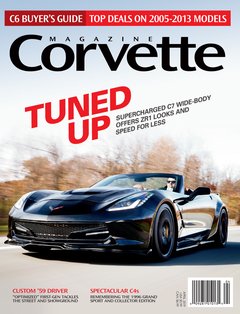