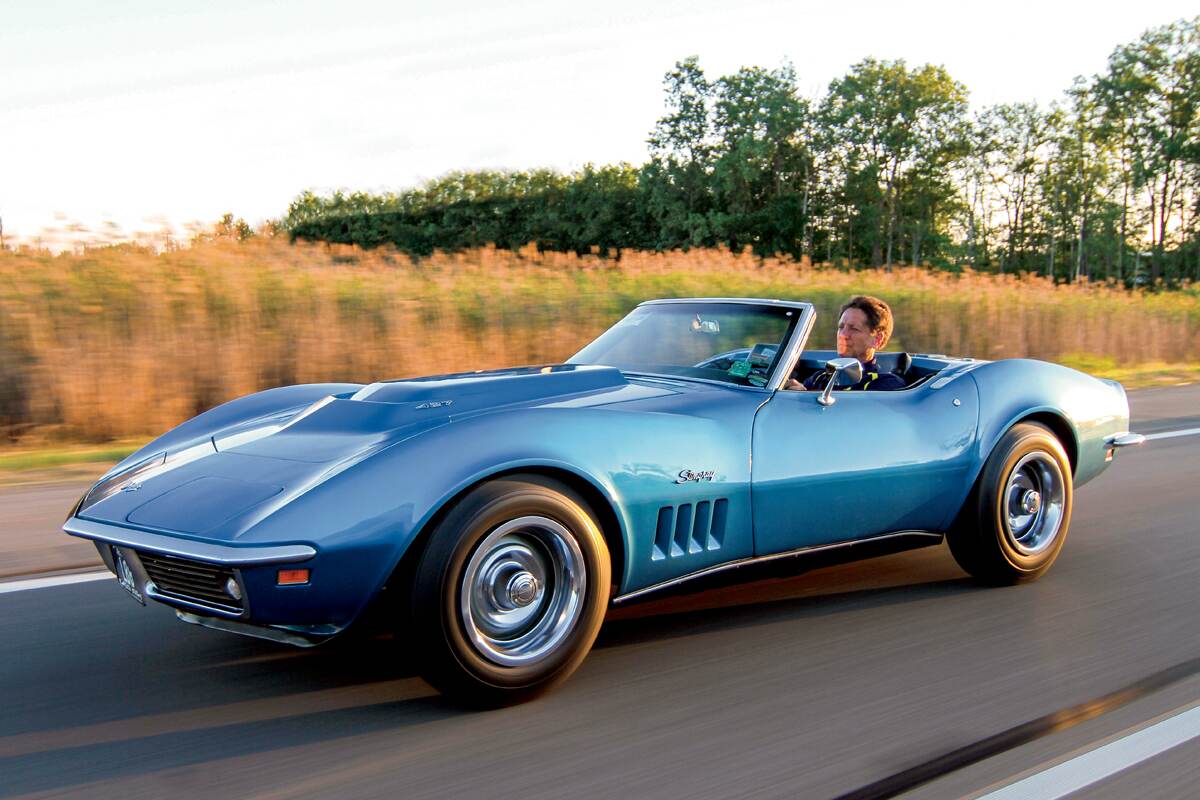 Returning safely to the States was on the mind of every serviceman who did a stint in Southeast Asia half a century ago. A young Richard Thomas was no exception, and like so many others, his focus on something better waiting for him back home provided hope and a reason to endure during more difficult times.

For Thomas, it was the Corvette he’d ordered in October 1968, in South Korea, through Barclay & Company Central Chevrolet. And if you’re going to dream while overseas, you’re going to dream big. Swayed by the car-magazine stories of the racing-bred L88 427, he opted for that very engine package, even if he didn’t quite realize just how “unique” the car would be on the street.

Thomas didn’t hold back on the options, either. The Le Mans Blue convertible was ordered with just about everything that could be bolted to it at the St. Louis plant, including the hardtop, a rear defroster, an engine-block heater, an alarm system and more. It was not, however, built with a radio, power steering or air conditioning, as those features weren’t available with the L88 package, which Chevrolet intended to sell primarily to racers. 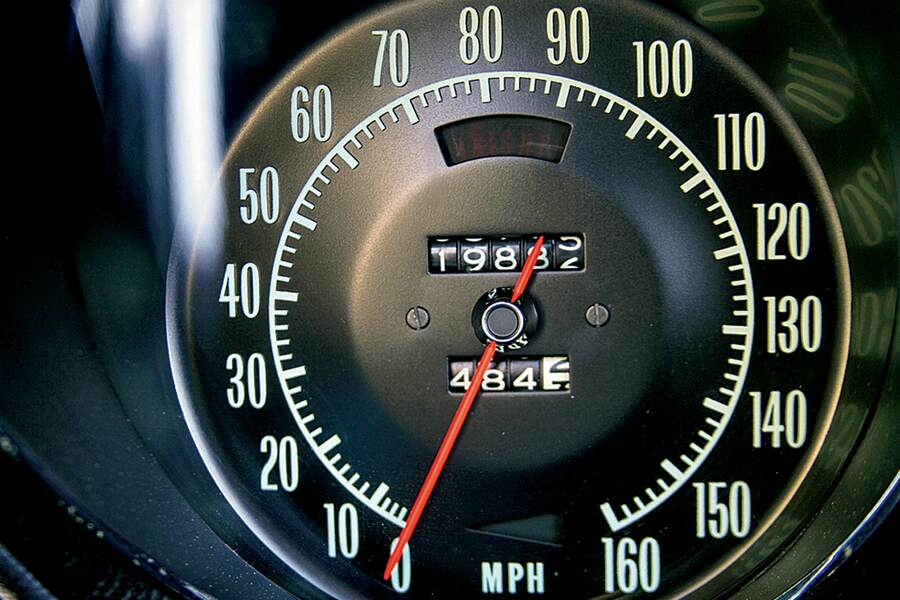 The roster of options almost doubled the base price of the car, for a grand total of $6,839.70—the equivalent of about $46,800 today, adjusted for inflation. It wasn’t inexpensive, compared with the $3,200 Road Runners many soldiers slipped into upon their return Stateside, but its top-rung performance status made it a surprisingly strong value. In fact, it looks even stronger 50 years later, especially considering that the car is believed to be the most heavily optioned L88 produced.

The L88 package, including its iconic bulged hood, accounted for about $1,600 of the sticker price’s total, with many of the car’s other options, including the heavy-duty F41 suspension, K66-code transistorized ignition, J56 heavy-duty brakes, G81 Posi rear axle and M22 four-speed, mandatory to support the baddest member of Chevy’s big-block family. A special cross-flow radiator without a fan shroud was also part of the package, and a heavy-duty Turbo-400 automatic would be offered late in 1969.

Developed originally as a racing engine that could be ordered in production models to make them legal in various motorsports classes, the L88’s staggering capability made it an instant legend after impressive performances at Daytona and Sebring. Its development was several years in the making, and its final form was largely derived from the combination that powered Roger Penske’s Corvette to a win at the 1966 Daytona 24-hour race. 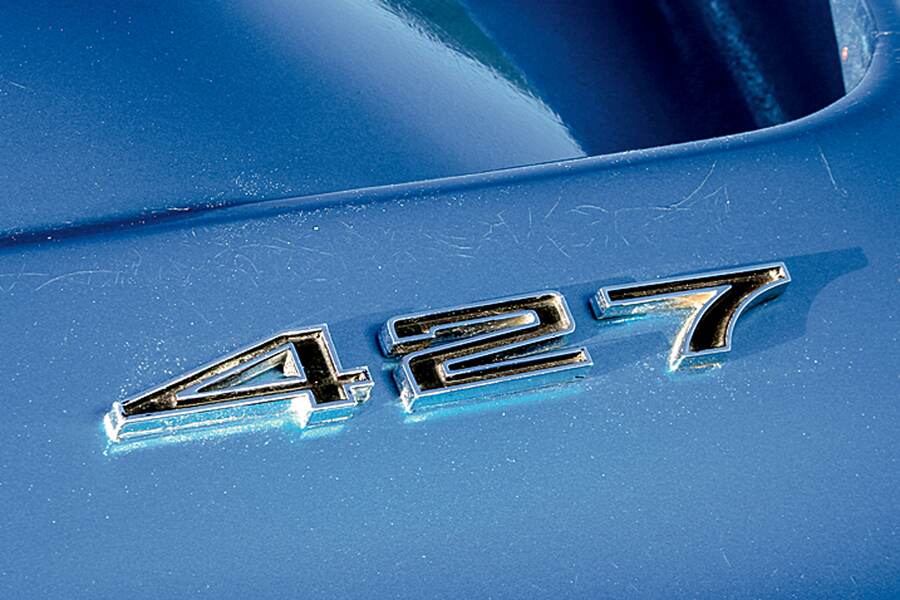 This street-legal version was a monster indeed, with 12.5:1 compression and a high-lift mechanical camshaft. It breathed through unique, rectangular-port heads featuring 2.19-inch intake and 1.72-inch exhaust valves, while the crankshaft, connecting rods and pistons were all heavy-duty forged pieces. The specs on the cam were eye-popping: 0.540-inch for the intake valves and 0.560-inch on the exhaust side, with 326 degrees and 334 degrees of duration, respectively. The big profiles required unique valve springs and stamped steel rocker arms with longer slots to accommodate the amount of lift involved. It was all serious stuff, designed not only to make big power, but to sustain it at high rpm on the track.

With its towering compression and comparatively short 3.76-inch stroke, the L88 was a low-rpm torque monster, making about 500 pound-feet barely a few ticks over idle. Then again, idling wasn’t the L88’s forte. There was a considerable amount of valve overlap with the solid-lifter camshaft, which was designed to do its thing at high revs. Consequently, street usability was less than ideal. The big squeeze in the combustion chambers also required at least 103-octane fuel, which was called out in no uncertain terms in bold, red type on an enormous white sticker affixed to the center console.

All of that wasn’t a big concern for Chevrolet, which intended for the cars to go straight from the dealership to the racetrack. A relatively high package price and the lack of creature comforts were meant, in part, to dissuade casual street jockeys from ticking the L88 option code. The company even sandbagged the horsepower rating—which could near 600 in race trim—at 430 to make the comparatively tractable, 435-horse L71 427 look more enticing. 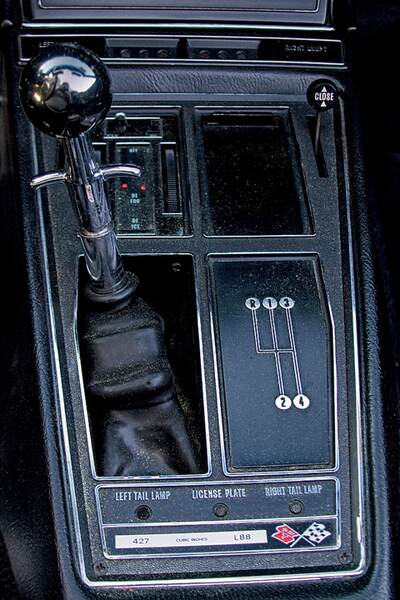 Thomas apparently didn’t get the memo, although he did get a letter or two from Chevrolet that explained production delays and that patience was required for this specialty car. He was still all in for the L88 and finally took delivery of it when he returned to Georgia in mid-1970. It was everything he expected it to be—and more. “It was a very fast car, no doubt about it,” he told us at the 2018 Bloomington Gold event, where the current owner, Tom Marcucci, invited him to revisit the car after more than four decades. “But it was also very hard to drive every day. That’s not what it was designed for.”

He recalled the challenges of driving the track-intended thoroughbred in the thick air of Georgia highways and byways. “There was no choke, which made things difficult. It also didn’t idle well, and without a fan shroud it ran hot in traffic. It just wasn’t a good car for that sort of driving.” A lack of air conditioning while driving in the South couldn’t have been comfortable, either.

Thomas sold the car about a year later, with few miles on the odometer. It then passed through a series of thoughtful owners who were careful to preserve the rare, landmark Corvette. Early on, they included Errol McKoy, who was an executive for the Six Flags amusement-park company and who later went on to be the CEO of the Texas State Fair. In fact, the L88 was featured on the cover of Vette Vues in November, 1978, with a Six Flags roller coaster in the background. 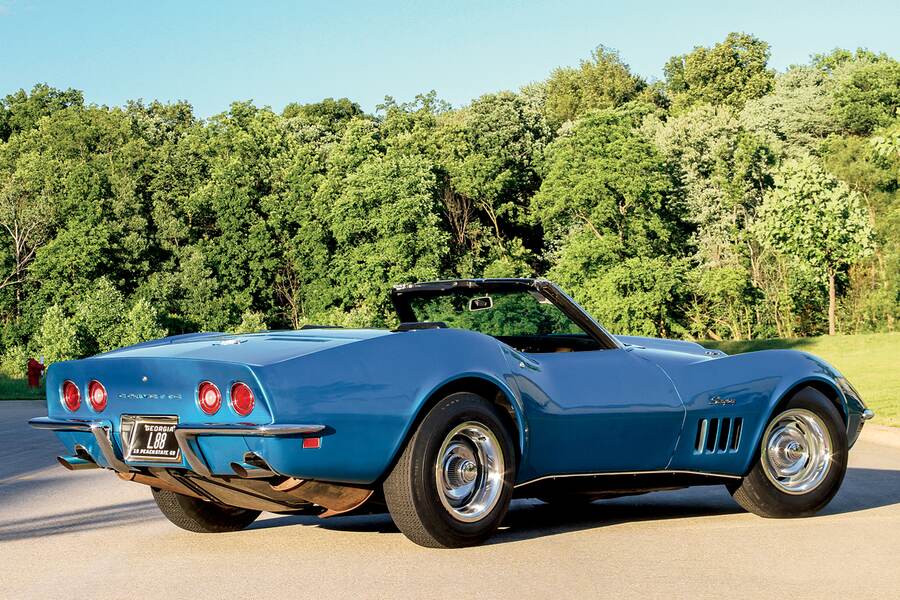 After that, noted Corvette collector and Bloomington Gold/NCRS judge Dr. Paul Noble purchased the car and held on to it for the next 20 years or so. From there, it passed through the hands of Ron Landis, Don Felts and another gentleman who sold it at Gooding and Company’s 2013 Scottsdale event, where it earned a strong $825,000. With the help of dealer “Corvette Mike” Vietro, Marcucci acquired the L88 in 2016 from the auction’s high bidder. “It’s one of the best-preserved and best-documented L88 Corvettes there is, and that’s exactly what I was looking for,” Marcucci told us. “I wanted the ‘crown jewel,’ and this is it.”

Speaking of preservation, none of the previous owners did anything more than maintain the car in its original condition. Yes, there are a couple of nicks in the St. Louis–sprayed Le Mans Blue lacquer, but nothing that would have justified a frame-off restoration. The same goes for the original black vinyl interior. Hell, the 19,000-mile car still has the factory-issue top, tires and exhaust system. Most importantly, the powertrain is original, too. The aluminum-headed big-block, Muncie transmission and 12-bolt rearend are all present and accounted for, and are believed to have never been removed from the car. Even the unique spark-plug wires remain in situ, dated “2-69.”

That didn’t stop Marcucci from adding a few miles to the odometer for our photo session, winding it out on a suburban Detroit freeway for the driving shots. The mechanical “clack” from the solid-lifter 427 sounded wonderful at velocities the car almost certainly hadn’t achieved in years. But just as Thomas noted about his early experiences with the car, it didn’t like loafing around at lower speeds. “She’s getting hot,” Marcucci yelled as we neared the end of the shoot. And with that, he drove it straight home, keeping the car moving fast enough to maintain airflow through the all-too-small grilles. 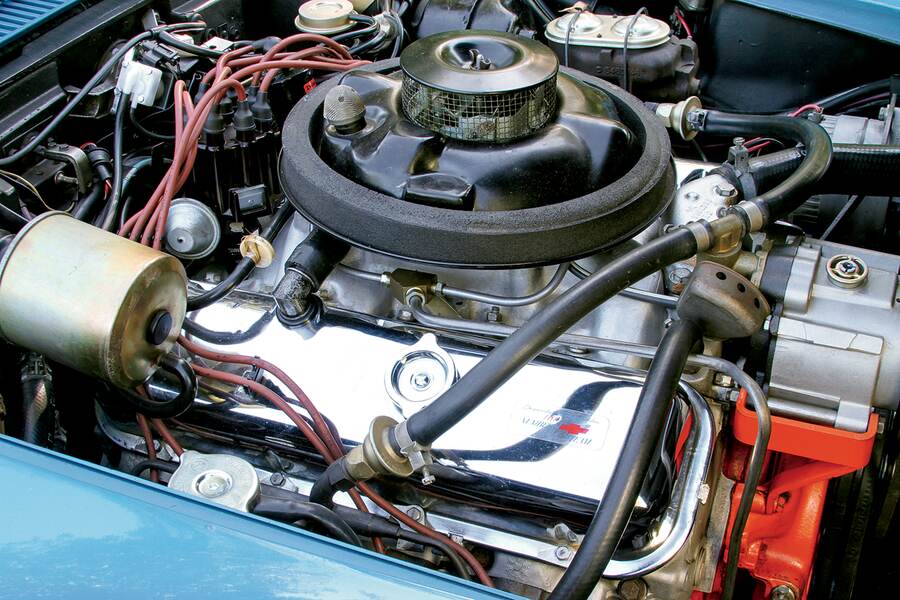 It’s worth recalling that for all of the L88’s larger-than-life exploits on the track, only 216 production cars were built between its introduction in 1967 and the end in 1969. The majority—116 of them—were built in ’69, and fewer than half were roadsters. With so few produced, the luck this example has experienced with its succession of preservation-minded owners is almost incalculable. Its ironclad provenance has helped it earn Bloomington Gold Survivor and Gold certifications, as well as NCRS Top Flight honors.

As we write this, Marcucci is prepping the car for the Muscle Car and Corvette Nationals in Chicago, where it will go for the coveted “triple crown” of certification. It is also one of only three cars to attend all of Bloomington Gold’s L88 Special Collection displays, in 1988, 1998, 2008 and 2018, along with another Special Collection in 1985 and induction into the organization’s Hall of Fame in 2008. It is one of only six L88s so honored.

That’s a lengthy list of accolades, but deserving for a benchmark example of one of the most desirable and important production Corvettes in history. 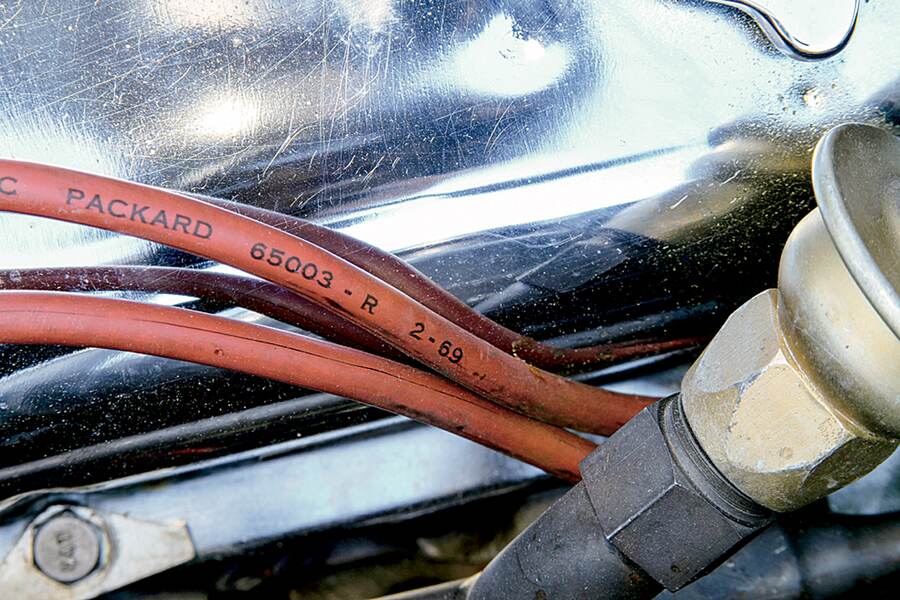 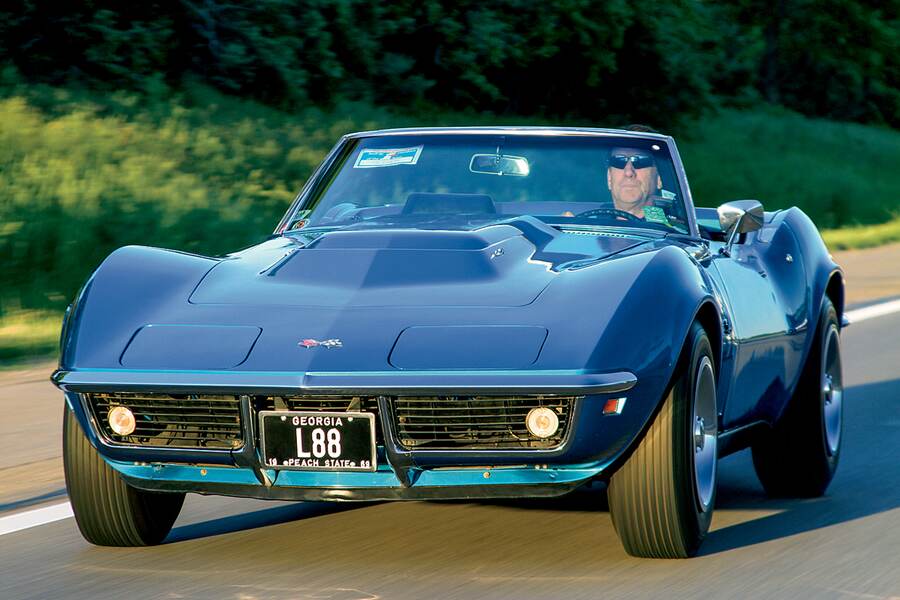 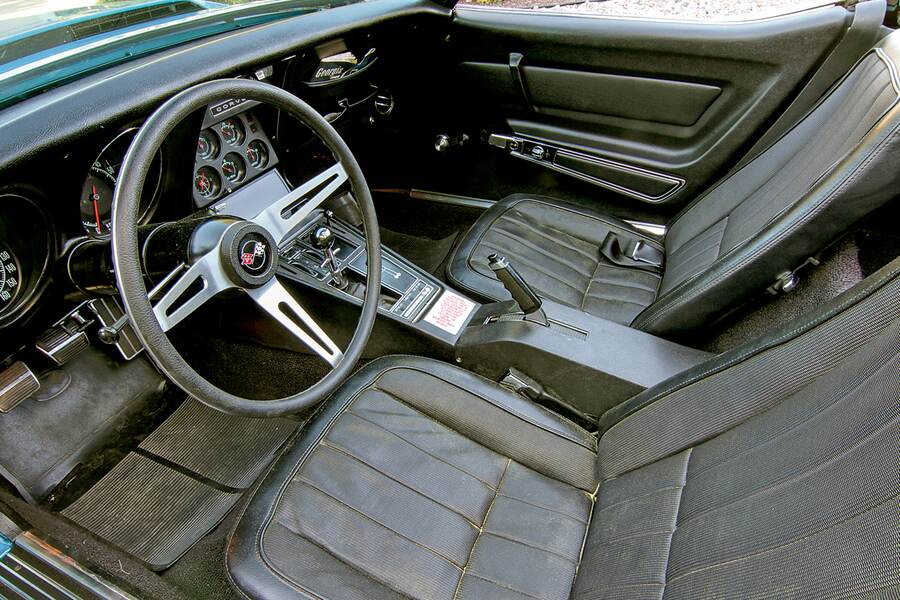 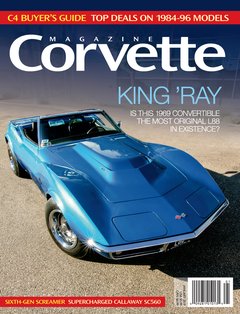