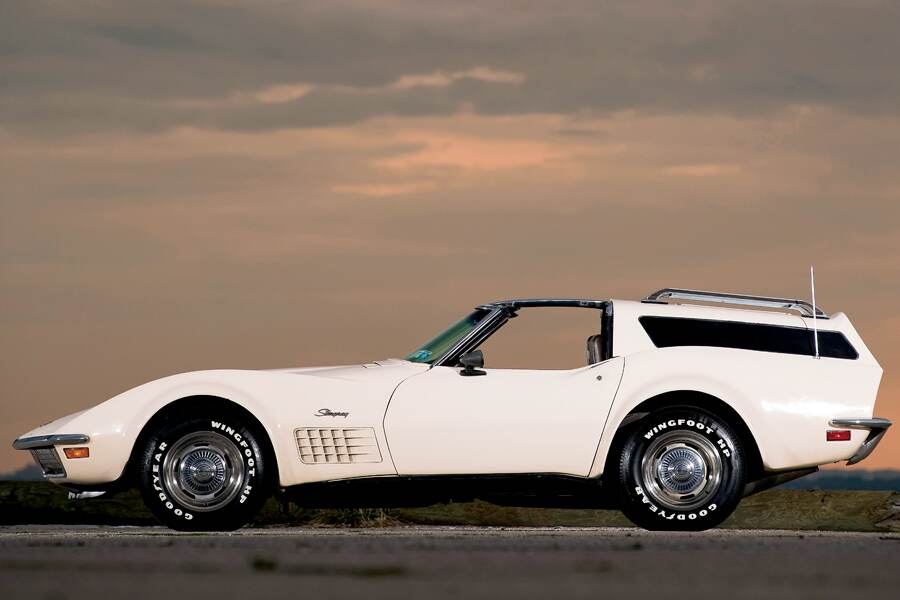 Though early Corvettes were impractical in most respects, they did at least offer decent cargo-carrying capacity in spite of their relatively small size, low-slung styling, and high-performance capabilities. From 1953-62 all of them came with a real trunk that afforded reasonable, if not generous, storage space, and even better, the boot could be accessed by simply popping open its lid. The 1963-67 coupes had a slightly smaller cargo space that could only be reached via the car’s side doors, while convertibles from the same era had very little interior storage capacity at all, especially when the top was folded down. The problem grew even worse with the C3, introduced in model year 1968.

One obvious solution to the lack of storage for C3s made up until 1978, when the hatchback-style rear window was introduced, was a rear-deck-mounted luggage rack. Chevrolet dealers sold these as part of their official accessory line, and various aftermarket companies offered their own versions. But while these bolt-on racks did increase cargo-carrying capacity, they were hardly convenient or secure. And course they exposed whatever was strapped thereto to the weather and other hazards of open-air motoring.

Though arguably slightly ridiculous, another solution was to convert run-of-the-mill Corvettes into station wagons, and that’s exactly what some people did. Trying to figure out where the very first C3 wagon came from is analogous to sorting out who built the Great Sphinx of Giza. After wading through a plethora of historic materials and tracking down some of the key people involved, it appears as though noted River Rouge, Michigan custom-car builder Chuck Miller was the starting point. Miller had a client named Uriel Jones who was a professional drummer. Besides drumming for Motown’s in-house studio band, the Funk Brothers, Jones spent a lot of time playing gigs on the road. He had a ’68 Corvette convertible that he loved to drive, but because it couldn’t accommodate his drum set, he had to leave the car at home most of the time. In early 1971 Jones asked Miller if there was something he could do to his Corvette to create enough storage space for the drums, and that’s when Miller came up with the idea of turning it into a station wagon. 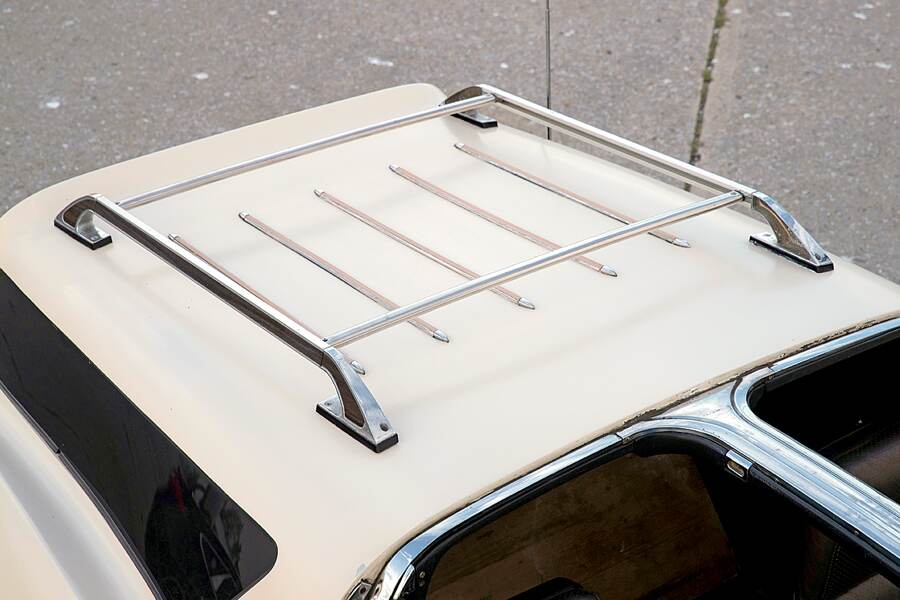 Jones liked the idea, and Miller asked Harry Bentley Bradley to create a viable plan to do the conversion. Bradley is a Pratt Institute–educated industrial designer who worked at GM for four years beginning in July 1962. In 1966 he left GM to take a job at toymaker Mattel, where he spent nearly two years designing a range of stylized die-cast vehicles that came to be known as the Hot Wheels line. Following his departure from Mattel in 1969, Bradley launched his own design firm and began a long career teaching at the Art Center College of Design in Los Angeles. Miller and Bradley had collaborated on numerous custom-car builds previously, including the 1971 Plymouth Road Runner and ’71 ‘Cuda 440 Rapid Transit System Caravan showpieces.

In keeping with his design philosophy, Bradley’s wagon addition incorporated some key styling elements that helped define Corvette in the first place, most notably the upward-swooped spoiler of the rear deck. His finished creation looked similar to the Vega Kammback wagon, one of four body styles offered for the Chevy subcompact beginning in 1971. The resemblance between the Corvette wagon and the Vega wagon was not surprising, given that much of the Vega’s design was done in the Camaro/Corvette studio under the direct leadership of Henry Haga, with the guiding hand of Bill Mitchell.

Before Miller’s shop, called Styline Customs, went to work building the wagon, Uriel Jones’ car was involved in a front-end crash. “We were working on both ends of the car at the same time,” remembers Miller. Since the front had to be fixed anyway, Miller modified it. He also added a number of custom features unrelated to the collision or the wagon conversion, including front and rear fender flares, ’69 Corvette side pipes, and a one-piece rear bumper. To bring Bradley’s wagon design to fruition, Miller’s shop worked up a clay model and from that made plaster molds in which the fiberglass parts were “laid up” by hand. The molds allowed Miller to produce the body parts needed to make additional wagons. 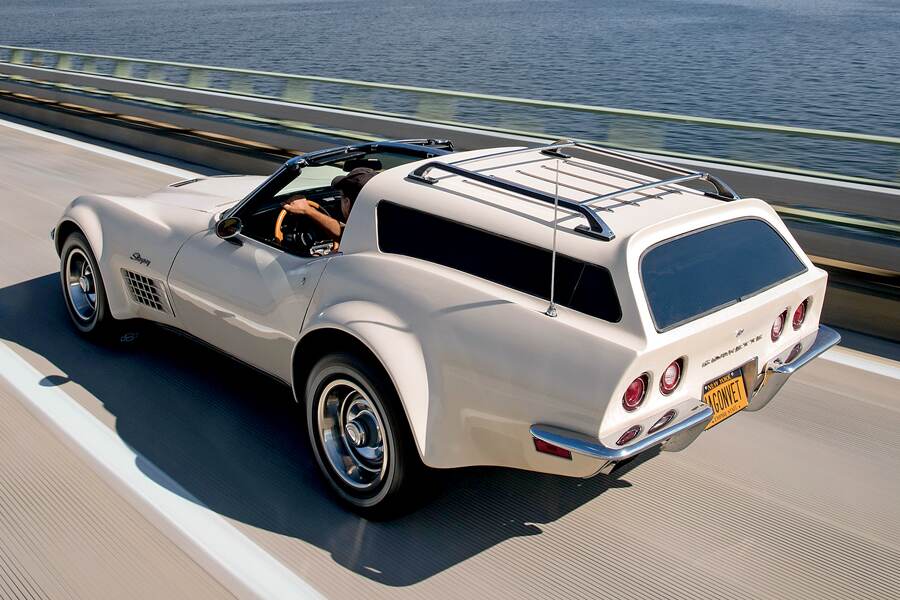 After Jones’ ’68 convertible was completed, it was shown at the Detroit Autorama custom-car show. It earned a First Place award at that premier event and was then featured in the July 1972 issue of Car and Driver magazine. The exposure engendered a great deal of interest, which validated Miller’s plan to put his wagon conversion into production. He would offer it as a turnkey car built in his shop or as a complete kit that Corvette owners could take to the shop of their choice—or, if talented and brave enough, build themselves.

The kit included the wagon section, a floor extension, Plexiglas windows and stainless-steel window trim. The builder had to source his own fuel tank to replace the Corvette’s factory tank, which sat high between the tail-lamp panel and interior rear bulkhead. To allow the wagon’s floor to extend all the way back, the tank had to be relocated lower, to the area where the factory spare-tire carrier normally goes. For wagon conversions fitted with side pipes, Miller recommended using a Mustang gas tank, which was close in capacity to the original Corvette tank. Cars with under-car exhaust had to use a narrower tank, such as the one found in the Chevy Vega. Either way, the fill for the tank was located behind the license plate.

To build his second wagon, Miller made another set of body panels from his plaster molds and then modified the roof so it would fit on a coupe. The next logical step was to make another set of molds from the coupe conversion, and for that Miller turned to Ralph Eckler. “Ralph was in Indiana at the time,” Miller remembers, “and was already a big name in aftermarket Corvette body parts. My plaster molds were not suitable for higher-volume production, and I wasn’t set up with the proper equipment to manufacture large pieces, but Eckler’s was. 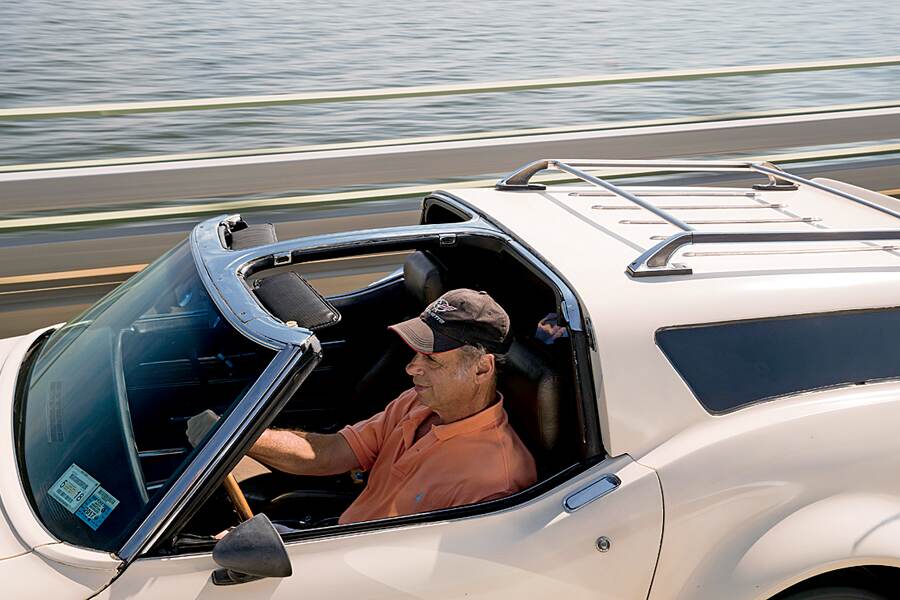 “I made a deal with Ralph for him to produce the parts and supply them exclusively to me for one year. After the year was up, he could put them in his catalog and sell them to anyone else. Ralph and three or four of his guys came to my shop and made high-quality molds from the coupe that I built.”

Miller estimates that he built 10-12 wagons for customers, and several more for himself. He also sold a lot of kits, especially during the year he was the exclusive distributor. “I made up a flyer and advertised the kit, and I was getting orders from all over the country,” he recalls. “And I always had a car under construction. If I wasn’t building one for a customer, I’d build a car for myself, drive it for a little while and then sell it.”

After the one-year exclusive arrangement ended, Eckler added the wagon kit to his product line. Because of its extensive advertising and catalog distribution, Eckler’s Corvette because the primary source for the wagon kit, which explains why, to this day, most people refer to C3 wagons as “Eckler’s wagons.” 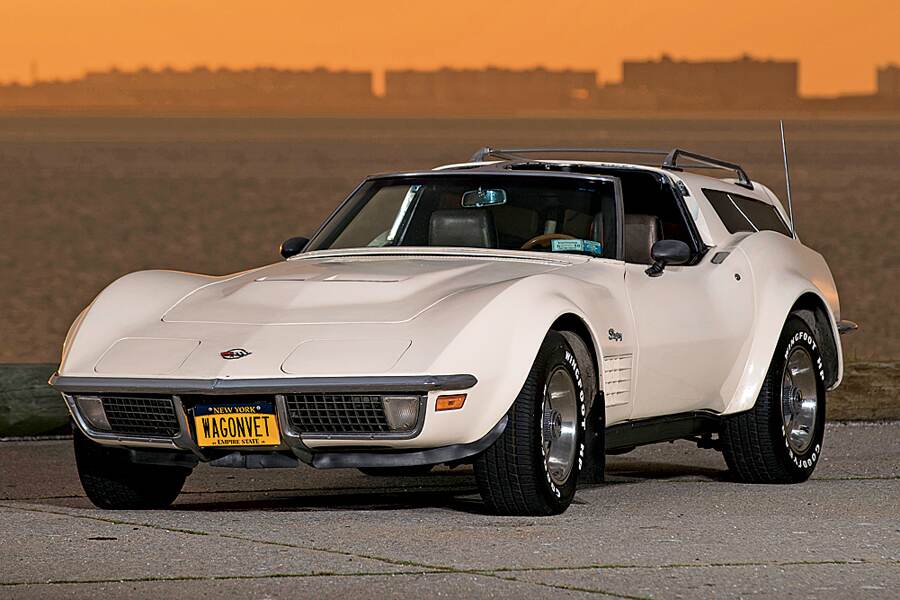 Even after his exclusive deal concluded, Miller continued building cars and selling kits as well, but at a slower pace than before. Some of his later builds included a functional rear hatch, with glass that hinged upward, and revised contours to better integrate with the rear urethane bumper assembly introduced on Corvettes in 1974. He also built several wagons with side windows that curved up onto the car’s roof. “We called the cars with side windows that extended onto the roof ‘Vista Cruisers’ because they reminded us of the Oldsmobile Vista Cruiser station wagons with their glass roofs.”

Though we don’t know who built it, our feature car was assembled with a Chuck Miller/Eckler’s kit. It was constructed on a ’72 coupe that, like most of the other Corvettes used for wagon conversions, was pretty well loaded with options. In addition to air conditioning, it came equipped with power steering, brakes and windows, tilt-telescoping steering column, and custom interior trim. The latter included wood appliqués for the shifter surround and door panels, and genuine leather seat covers.

Besides the wagon transformation, this ‘72 also has front and rear fender flares that, judging from the uniformity and likely age of the paint, were probably installed the same time the conversion was done. It also has seats from a 1985-88 Corvette, which were clearly added long after the wagon build was completed. And for added functionality, there’s a 1970s-vintage roof-mounted luggage rack. 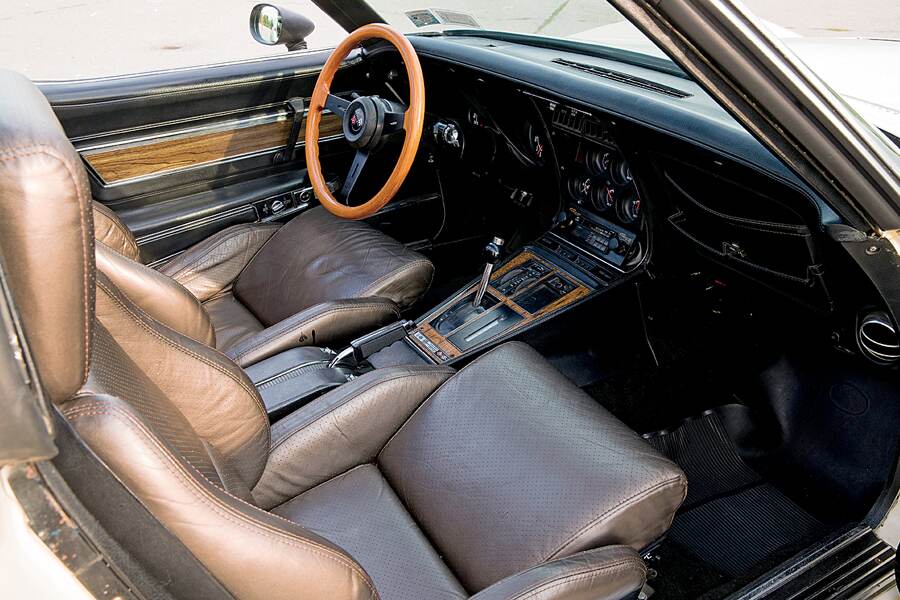 The present owner of this unusual car is long-time Corvette collector Douglas Brooks. He bought it two years ago from the second owner, in Syracuse, New York. He has eight other Corvettes in his garage, ranging from C1 to C5, but he calls his wagon “the most unusual and interesting car I’ve ever owned or driven.” 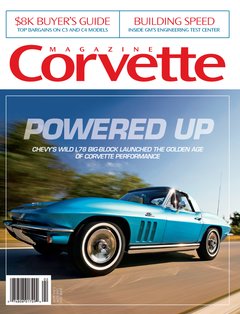