After nearly half a century and more than 600,000 miles, this ’63 Corvette is still bringing joy to its owner 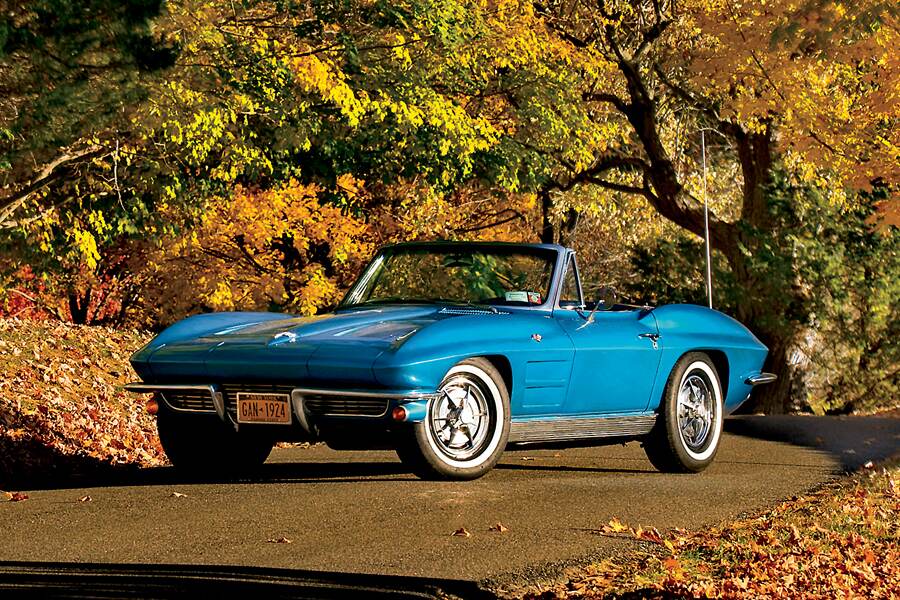 The way in which people view historic Corvettes has changed dramatically over time. When new, models from the 1950s and ’60s were often driven, modified and even abused. In most cases, the ones that survived eventually became little more than used cars, but as the ’70s wound down a clear shift began to emerge. Vintage Corvettes became increasingly collectible and were driven less and less. And those that had been customized were almost always restored back to their stock configuration.

But for every rule there is an exception, and in this case that exception is New Yorker Rich Luebkert. Luebkert bought a 327/340-horsepower ’63 convertible in April of 1971, and for the past 46-plus years he hasn’t cared one bit about changing trends or shifts in the hobby. He bought the car to drive, and drive it he did.

From the moment he acquired it, this ’63 was Luebkert’s year-round, daily driver. It transported him from his suburban home in Long Island to his job in Spanish Harlem day in and day out, through winter, spring, summer and fall. That meant regularly navigating hideous metropolitan New York traffic on terrible roads, and often doing it in awful weather. 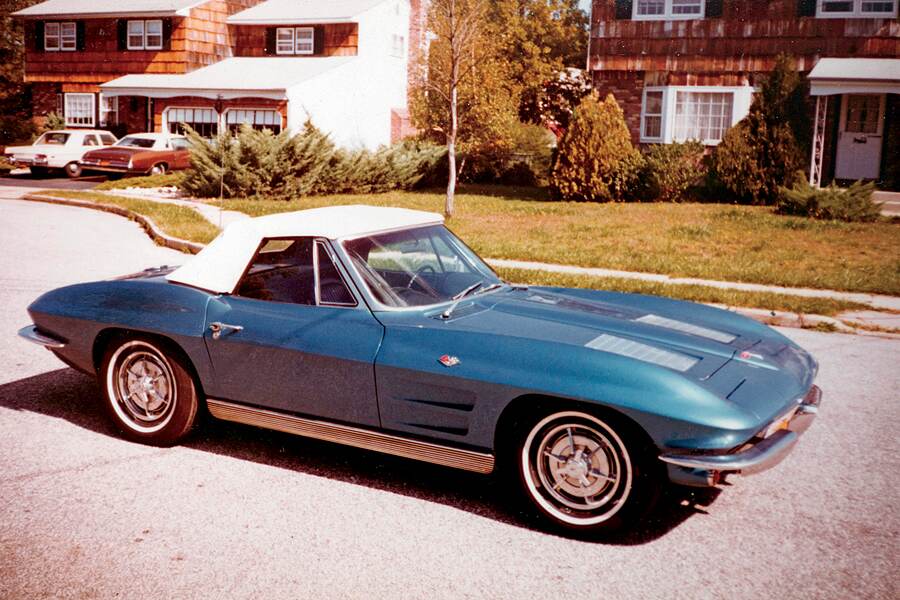 The 85-mile round-trip commute to work each day, plus all of the other driving Luebkert did in his Corvette, added up quickly, but in testimony to the reliability Chevrolet engineered into these vehicles, he experienced no serious problems until the car topped 300,000 miles. It was then that he noticed the distinct color and odor of burnt oil in the exhaust. At 335,000 miles, he removed the cylinder heads and had a valve job done to address the problem. This helped quite a bit but did not entirely solve the issue, as cylinder-wall and piston-ring wear were also letting oil into the combustion chambers. And so in 1980, with 360,000 miles on the clock, the original engine came out and a new Target Master 350 went in.

The brand-new engine ran like a fine Swiss watch through 1984, propelling the car 100,000 more miles, but its performance was less than inspiring, so Luebkert decided to fix up and reinstall the original 327. In retrospect, it was hardly a surprising development. Back in the day, besides regularly stretching his Corvette’s legs on the highway when traffic allowed, Luebkert had a well-earned reputation for never shying away from a street race, and he sent many a Mustang, Charger, GTO and Chevelle SS owner home dejected.

The original engine was a high-revving powerhouse that made 340 horses courtesy of an 11:1 compression ratio, a hot solid-lifter camshaft, large-valve cylinder heads and a four-barrel-topped aluminum intake manifold. It was complete and virtually all original, but after 360,000 faithful miles, it needed just about everything. Luebkert had the block’s cylinders bored .030-inches and installed new pistons, rings and bearings, as well as a new camshaft and all the other parts needed for a complete overhaul. Following careful reassembly, the engine was dropped into the car, where it remains to this day. Over the 33 years since the rebuild, it has carried the car another 242,000 fun-filled miles. That makes for a grand total of slightly more than 602,000 miles, meaning this is surely one of the highest-mileage Midyear Corvettes in existence. 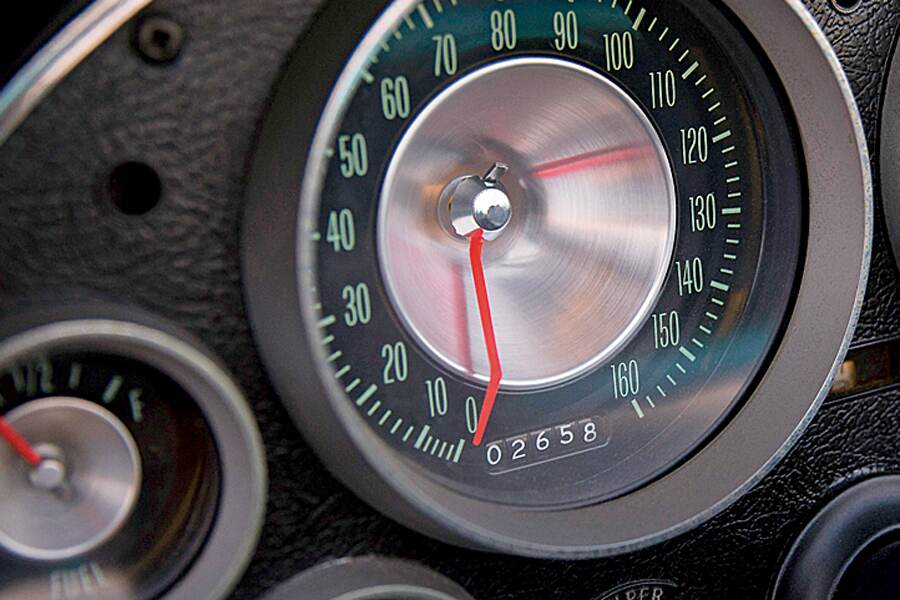 All of that use has caused various things in addition to the engine to wear out. The car’s original four-speed manual gearbox was rebuilt along the way, and the wheel bearings in the rear trailing arms were replaced. The alternator, water pump, starter motor and carburetor were all rebuilt, and the radiator was replaced with a new one.

In addition to rebuilding and repairing whatever mechanical parts cried out for help, Luebkert kept up with the car’s appearance over the years. In 1990 he began restoring the Corvette’s engine compartment, working on the car for around an hour each night after getting home from work. The job started with removing and methodically refinishing everything but the small-block itself. With plenty of elbow grease, he cleaned and stripped the engine, firewall, inner wheel housings and chassis, then repainted everything in its original factory color. After the radiator and support, wiper motor, expansion tank, wire harnesses and all of the other restored parts were reinstalled, the car looked as good as new under the hood.

Given the car’s super-high mileage and the nature of the driving environment in which it has long operated, it’s nothing short of a miracle that Luebkert’s Corvette has never been in an accident. All of that driving did, however, take a toll on the factory paint, which degraded significantly over time. When Luebkert turned the car over to a local body shop for new paint, he chose to forgo the original Daytona Blue, which is quite dark, for a lighter shade of blue, a color it still wears more than 40 years after the re-spray. 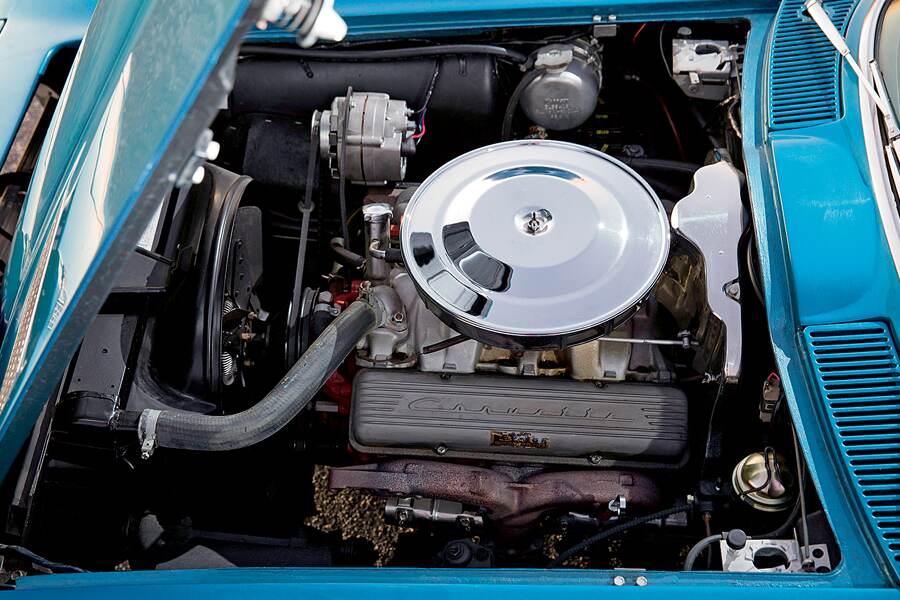 Besides changing the exterior hue, Luebkert has made a few other, relatively minor modifications to his Corvette over the years. Among these were the installation of slightly wider radial tires in place of the OEM bias-ply rubber, and the replacement of the factory shifter. “Changing gears with the original shifter was not as fast or easy as it should have been,” he recalls. “I got so frustrated with it one day that I took it out and threw it deep into the woods at Belmont Lake State Park.” He then bolted in a Hurst Competition Plus unit, which he describes as “an absolute delight” compared with the stocker. The replacement shifter looks OE from the top side but is actually a trick unit featuring a stock upper shaft mated to a Hurst bottom end.

Every vintage Corvette has compelling stories to tell, and Luebkert’s well-traveled ’63 roadster is no exception. One of the more interesting tales stems from the time the car was stolen and subsequently recovered. In September 1981 a colleague came into Luebkert’s office at his job in New York City and said, “Hey, what are you doing here? I just saw you drive away in your Corvette!” Stunned, Luebkert sprinted outside to the spot where his beloved car was previously parked, but by then it was too late.

Luebkert understandably assumed that he would never see his old friend again, and he was still very depressed about the whole situation when, on Columbus Day, exactly one month after the brazen daylight theft, he got a surprising phone call from the NYPD. Miraculously, his stolen Corvette had been recovered in the Bronx, in the precinct famously nicknamed Fort Apache, and would soon be returned to him. 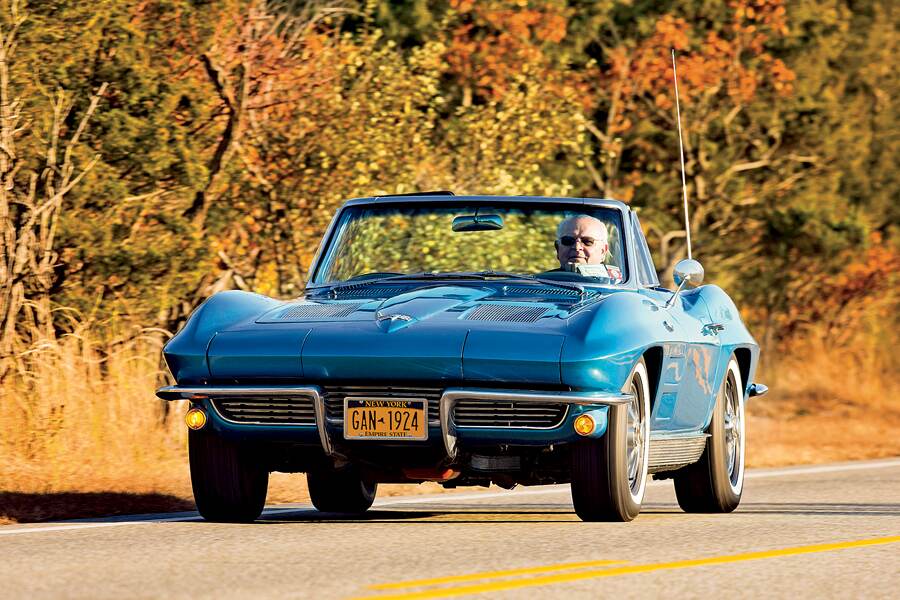 Vintage Corvettes were rare in the Fort Apache precinct, but it was more than the unusual presence of the ’63 convertible that led to its recovery. The thief apparently liked the car so much that he used it as a daily driver over the span of the month he had it. In what turned out to be a futile effort to stave off apprehension, he regularly fitted it with new license plates that he stole from other cars. By the time the stolen plates were reported to police, they’d already been discarded and replaced with a new pair. But in a fortuitous twist, the luckless thief happened to swipe a pair of plates from a blue Oldsmobile that had been involved in a hit-and-run accident a couple of days earlier. Because it was so unusual to see an old Corvette in that part of the Bronx, a policeman was inspired to check its license-plate number. When it came up as belonging to an Oldsmobile wanted in a hit-and-run accident, Mr. Sticky Fingers was pinched.

When the Corvette was returned to Luebkert, it was hardly the worse for its little adventure. Probably in a lame attempt to disguise his stolen prize, the thief applied tape-on pin striping and painted the sides of the car’s white convertible top black. Those minor modifications, and a bag of marijuana stashed behind the driver’s seat, were the only remnants of its time away from home.

Following the car’s return, Luebkert stopped driving it into New York year round. Its commuter service diminished further in 1998 when he bought a new C5 and used that, as well as a C6 that followed, to get to work most of the time, relegating the ’63 to very occasional commuter duty and frequent recreational use. Today the vintage Corvette shares garage space with a C7, and with Luebkert happily retired, both cars are driven only for fun. 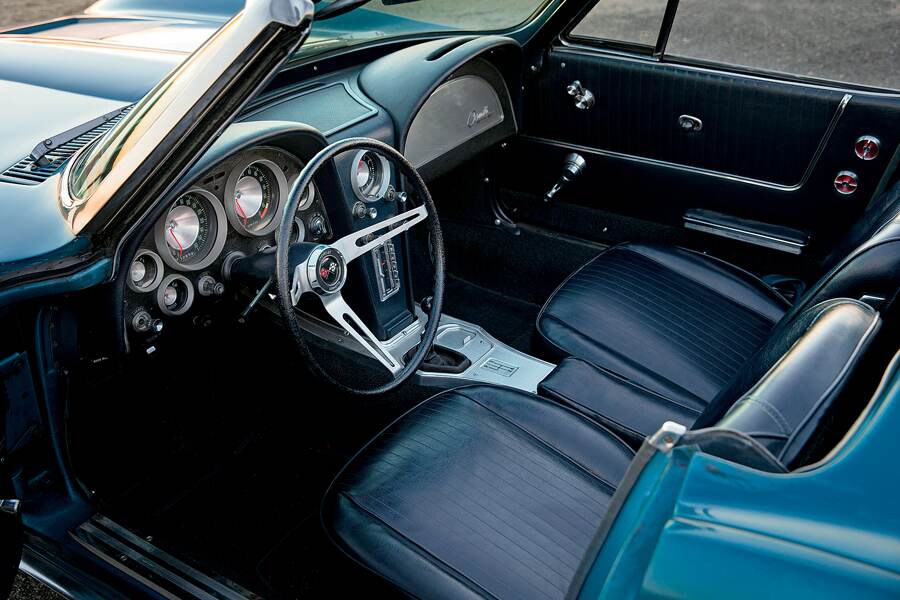 “People are surprised that I drive the ’63 as much as I drive the new one, which, by any measure, is an amazing car,” he reflects. “Everyone says the old girl can’t do anything as well as a new Corvette, but that’s not really true. The new one goes faster, stops better, handles better, has a great stereo, is more comfortable, gets better gas mileage and has ice-cold air conditioning. But the ’63 holds memories that can’t be replaced, and there is one thing it actually does a little bit better than the C7, which is put a really big smile on my face every time I take it out for a drive.” 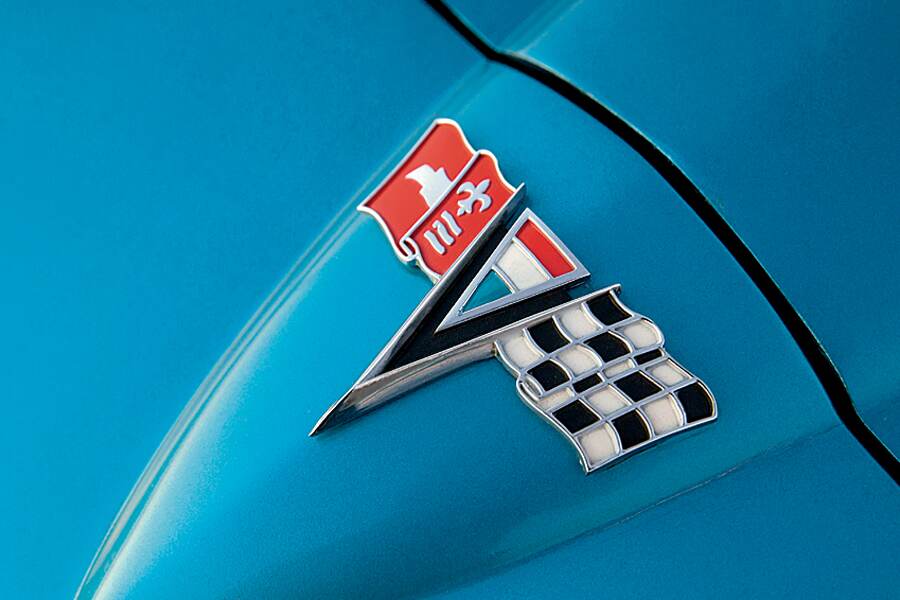 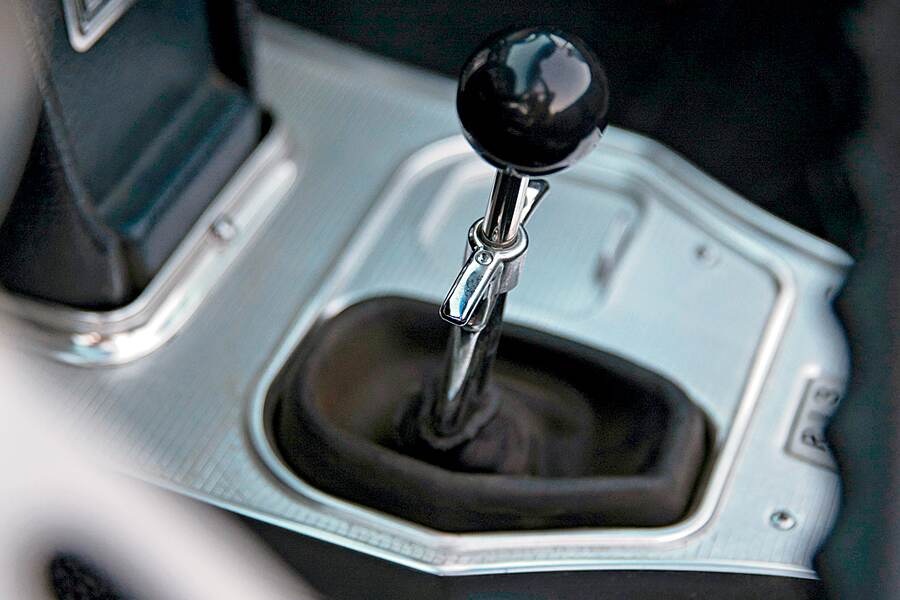 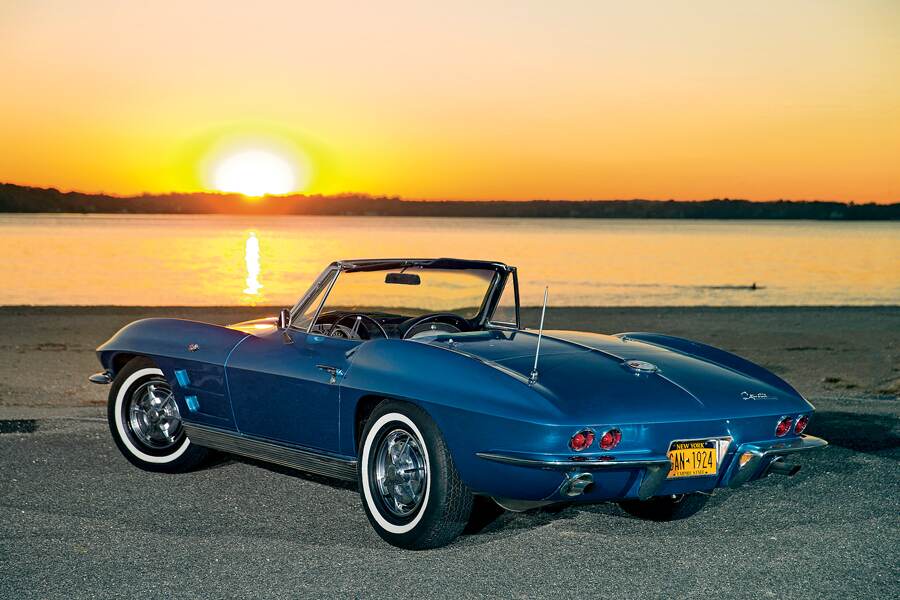 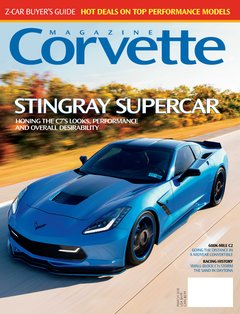