With a little help from a master restorer, David Wahrhaftig found the final piece in his Corvette troika 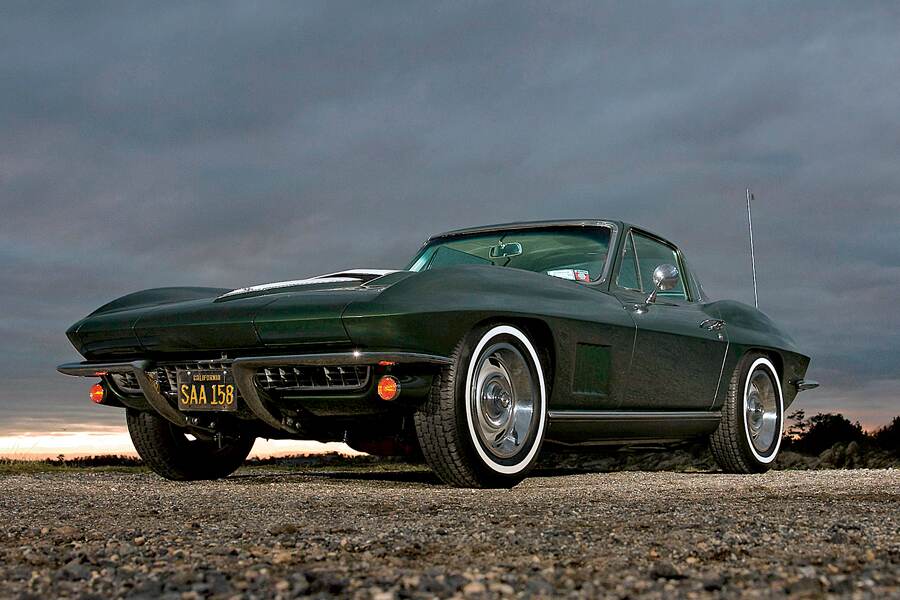 Because both performance and cosmetic modifications were so common in the 1960s and ’70s, it’s nearly impossible to find Corvettes of this vintage that haven’t been altered in some fashion. It’s even more difficult to locate early Vettes that have never been damaged, especially in the case of the ultra-high-performance examples, which were typically driven to their limits and beyond by overenthusiastic—and oftentimes under-skilled—owners.

Finally, there’s the issue of fraud when it comes to very rare and valuable examples, such as the 427-cube, 435-horsepower ’67 featured here. But while the scarcity of authentic, original and high-quality ’67 Tri-Power cars has scared off plenty of would-be buyers over the years, it did not dissuade enthusiast David Wahrhaftig from searching for one of his own.

Like so many others who came of age in the late 1960s, Wahrhaftig fell in love with hot cars early on. To this day, he vividly recalls the Chevelle SSs, Novas, Mustangs, Challengers, Barracudas and Camaros in and around the working-class neighborhood he grew up in outside of Washington, D.C. The cars that made the greatest impression, however, were the Corvettes running around town. 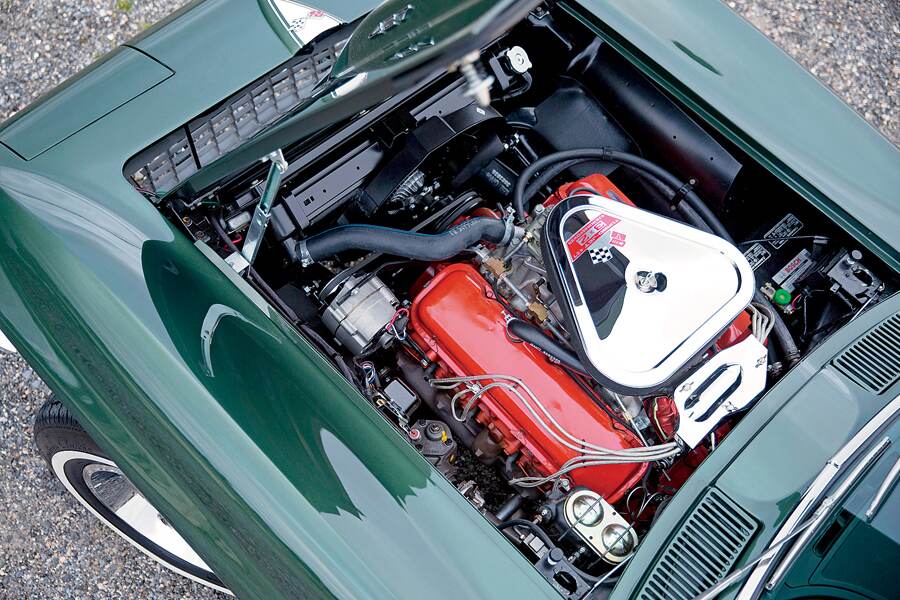 “I remember my first Corvette sighting like it was yesterday,” says Wahrhaftig. “The girl down the street got picked up for senior prom by a guy in a Roman Red ’62. I had never seen one in the ‘flesh’ before, and it was like sighting a spaceship—never to be forgotten. The guy had on a white tuxedo, the girl looked like a movie star and it seemed so improbable for our neighborhood. That image has stayed with me.”

Amidst the typical performance cars of the era that he regularly saw, another Corvette remains forever etched in Wahrhaftig’s memory. “The most unusual car for our neighborhood was a heavily customized ’62…with a huge, chromed blower sticking up through the hood, slicks and a custom paint job complete with the requisite flames.”

When Wahrhaftig got his license in 1973, a Corvette was out of reach financially, so he focused instead on working hard and saving his money to buy a Nova SS. “I worked as a paper boy during the school year, getting up at 4 a.m., and [then] poured concrete parking slabs during the summer in order to earn enough money to buy my own car,” he says. 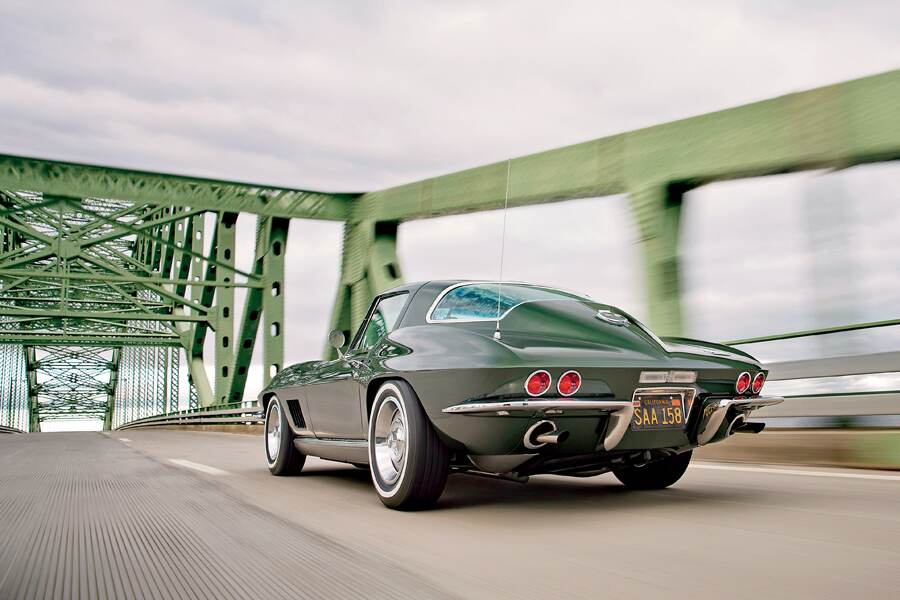 But despite the best of intentions, the young car enthusiast was ultimately undone by his own naiveté. “I bought a standard ’70 Chevy Nova from a used-car dealer on the day I turned 16 and passed my driving test,” he recalls. “The dealer ripped me off in every way imaginable, going as far as to switch the tires out, keeping the new ones and installing old tires with about a day’s worth of driving left in them. It was a hard learned lesson, and the memory stays with me to this day.”

Wahrhaftig went on to make the best of the situation, outfitting his Nova with Cragar SS wheels and white-letter tires, and raising the rear via additional leafs for the spring and shock extenders to give it a raked stance. In the ensuing years, all through college and graduate school, a “series of unfortunate cars” followed, including a ’71 Honda Accord, a ’79 Datsun, two BMWs and a ’79 911. “Of note,” he recalls, “the 240Z had so much rust that I lost an alarm clock through the passenger floorboard driving back to school one year.”

Wahrhaftig’s career took him from Washington, D.C. to San Francisco and then Los Angeles, where he was surrounded by the Southern California car culture. He finally had enough money to indulge his passion for Corvettes and bought a nice-driving ’66 from Anaheim-based restorer Mike Scott. Shortly thereafter he bought a totally correct, show-quality ’61 from Scott, whom he calls “a terrific restorer and a better guy.” 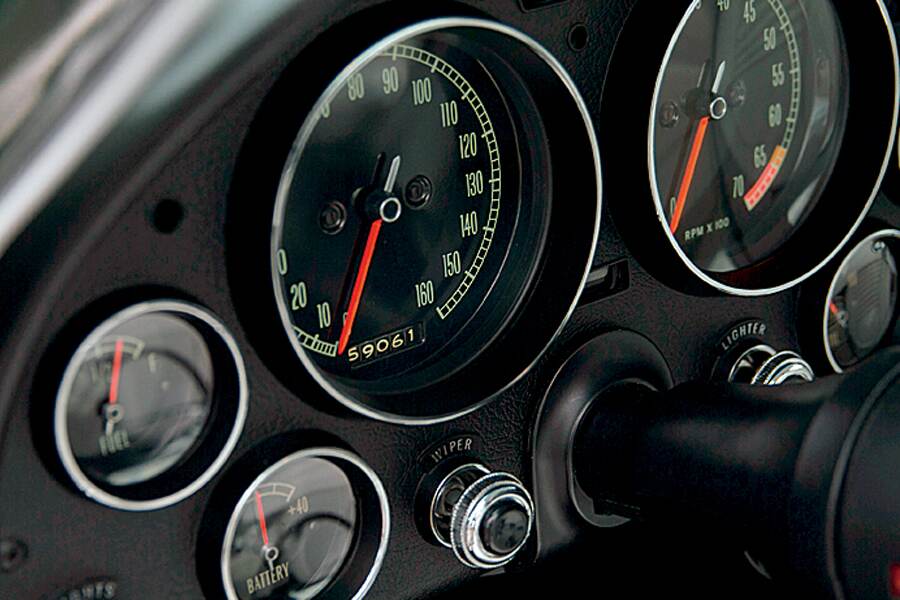 The following 20 years brought marriage to an “understanding wife,” three sons and a move back to the East Coast. And through it all, Wahrhaftig held onto his beloved Corvettes. He sometimes contemplated adding other ones to his stable—in particular a ’57, a ’63 Split-Window and a ’67 427/435—but he didn’t start searching in earnest until a life-changing experience occurred about 10 years ago.

“I was in a plane crash,” he explains, “in which miraculously no one was seriously hurt. We were all very lucky to have gotten out of the plane before it was engulfed by flames. Following the crash came a period of introspection and a resulting different outlook. It was then that I decided to sell the ’66 and purchase the other three Corvettes.”

Wahrhaftig let his trusted Corvette friends know he was serious about buying outstanding examples of the cars he wanted, and before long a beautiful, unmolested 327/340 Split-Window materialized. It was a three-owner California car that had been located by the aforementioned Mike Scott. 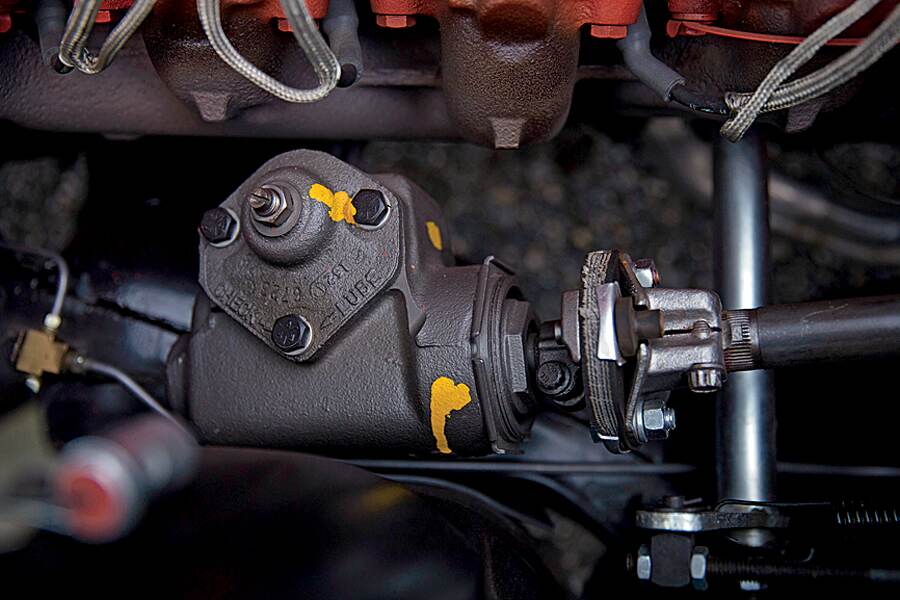 Acquiring the other two Corvettes would prove more challenging, though not without the occasional notable interlude. “I’ve been a Bruce Springsteen and the E Street Band fan for decades, and have attended more than 200 shows,” Wahrhaftig says. “I was invited to a show in London by a close friend, but couldn’t make it because I was coaching Little League baseball. During the game I got a call from my friend…in London, saying ‘[E Street Band drummer] Max Weinberg wants to talk to you.’” It seems Weinberg, a well-known car enthusiast, had a Cascade Green ’57 Corvette he was thinking about selling.

The car in question had been restored by Dominick Salvemini, the owner of Vette Dreams in West Babylon, New York. And while Wahrhaftig didn’t end up buying the Weinberg car, his new association with Salvemini later paid off in the form of an equally desirable C1. “Dom called me about a 270-horse, four-speed Onyx Black 1957 [he had acquired],” Wahrhaftig says. “He restored the car over the next year or so, and I was incredibly happy when he delivered it. He is as knowledgeable about Corvettes as anyone I’ve met, fastidious with respect to authenticity…and extremely enthusiastic.”

Based on his positive experience with the ’57, Wahrhaftig asked Salvemini to keep an eye out for a quality ’67 427/435 to complete his trio of Corvette desiderata. “I wanted the ’67, as I thought the model was the best of the Midyears,” he explains. “All the ‘funny business,’ fake vents and extraneous items were gone. Even the old ‘umbrella’ emergency brake release was improved to a console version. Today, with more knowledge, I view the ’67 as among the most sophisticated and best engineered cars of its time.” 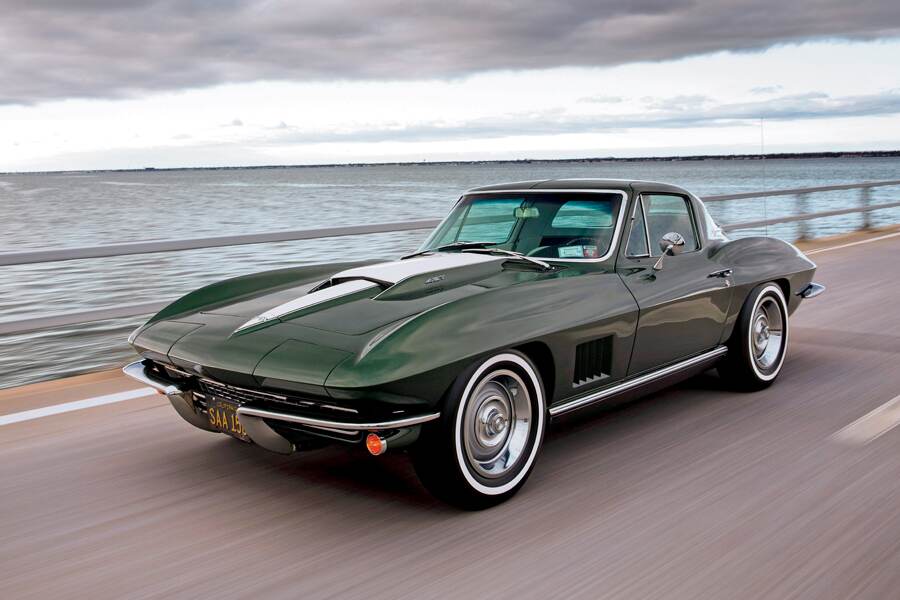 Wahrhaftig’s desire for a top-notch ’67 Tri-Power car immediately made Salvemini think of the magnificent coupe shown here. Though the previous owner had disassembled it for restoration years earlier, every part of the car, from its body and chassis to its engine and drivetrain, was in perfect, as-new condition.

“I’ve been in the Corvette-restoration business for over 40 years and have never seen a Midyear with a body and chassis as nice as the ones this car has,” notes Salvemini. “Not only was the engine original and untouched, everything attached to it was [too], including the carburetors, manifolds, water pump, distributor and alternator.” Better still, the previous owner had done a superlative job of the stripping the paint, and had been meticulous about saving and organizing every part. The high level of skill and planning made the restoration “an absolute pleasure,” Salvemini adds.

As happy as Salvemini was with performing the work, Wahrhaftig was even happier with the results. “The restoration was superb, with every single element of the car restored to stock specifications,” he says. “I’ve never been so excited or pleased about a car.” 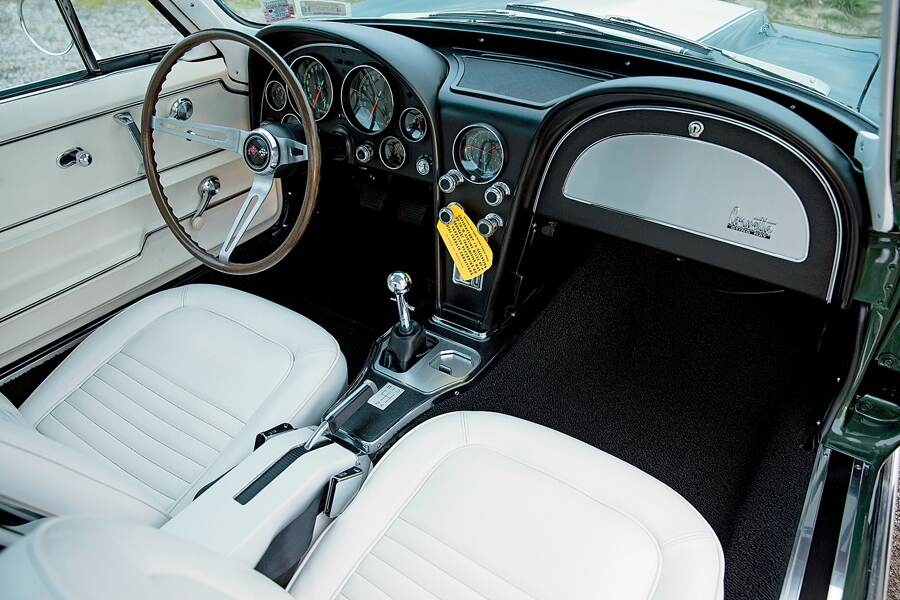 Today, undoubtedly influenced by his brush with disaster in the plane crash, Wahrhaftig does not hesitate to wring every second of enjoyment out of his gorgeous ’67. “I drive the car around town consistently, other than when we have winter salt on the road,” he says. “I’ve found that it’s far and away my favorite car to drive, and I have to force myself to drive anything else.

“I treat it like any car, parking in parking lots next to other cars, and I’ve never had a problem,” he continues. “Most often, I come back to the car to find someone looking at it, and telling me about their memories of vintage Corvettes.”

Not surprisingly, the triple-carb big-block comes in for its share of plaudits as well. “I find the engine to be incredibly tractable, with almost perfect response,” Wahrhaftig says. “As soon as the car starts rolling, you can push the pedal to the floor and get an immediate rush of power. It’s stronger throughout the torque range than any car I’ve driven, and you can feel the power in any gear.

“The sound is perfect, and the styling…is the epitome of American car design, from the iconic exterior to the perfectly balanced instrument panel. It’s a great mix of performance and looks. To me, it’s the perfect car.” 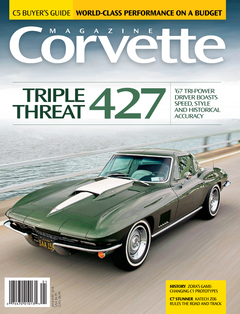