A special-order paint scheme creates a one-of-a-kind L-79 roadster—but is it a true COPO? 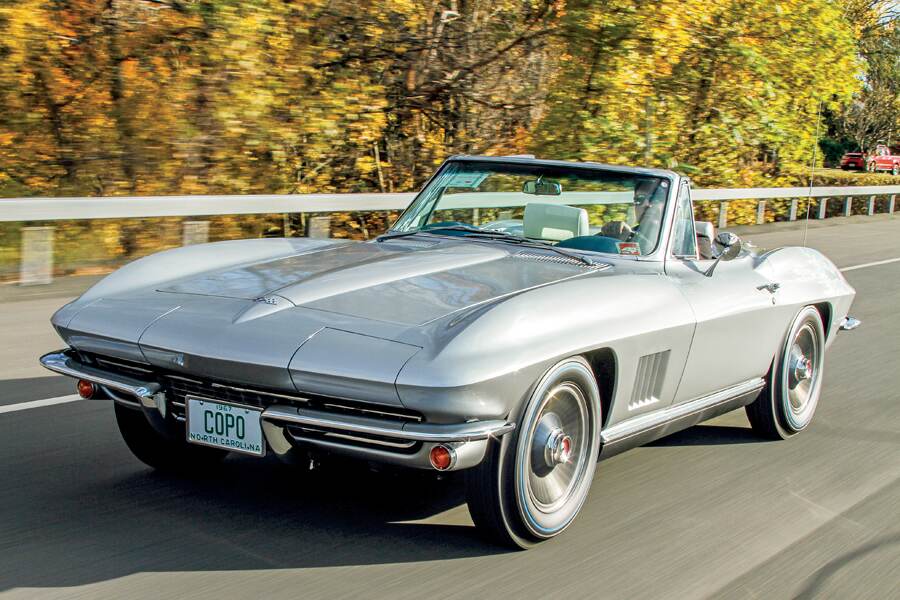 When you hear the term “COPO,” you typically think of ’69 Camaros equipped with Corvette-derived 427 engines, but there were COPO Corvettes, too. The acronym stands for “Central Office Production Order,” and it was used by Chevrolet dealers to obtain all kinds of vehicle combinations that weren’t listed on the standard order sheet. Mostly, that meant special, non-production equipment for fleet trucks or police cars, which required approval from Chevy’s manufacturing or engineering departments.

In 1967, there were a small number of COPO Corvettes built. You’ll get a different figure depending on whom you ask, with some insisting that only 10 COPO Corvettes were built, while others suggest that the total is closer to 25, or possibly more. Indeed, during our non-scientific search for known COPO cars, we came up with at least 24 claimed COPOs. They include a 427 roadster ordered by legendary GM stylist Bill Mitchell, who personally oversaw the car’s assembly (it was a gift for his wife); a customized coupe for Bob Wingate, who had been the country’s best-selling Corvette salesman for five years in a row (see our September 2006 issue); an Elkhart Blue coupe with a blue leather interior (black and teal were the only standard interior colors available with that paint shade); a 427/390 roadster painted Elkhart Blue with a Goodwood Green stinger and green interior; and five cars special-ordered by Chevrolet painted Silver Pearl with red interiors (like Elkhart Blue, Silver Pearl was only officially available with a black or teal gut).

There were also 13 Corvettes reportedly ordered as Shriner “patrol” (that is, parade) vehicles in Nebraska. So far, that unofficial COPO search rings up 22 ’67 Corvettes. The small-block roadster you see on these pages—Silver Pearl with a non-standard blue-and-white interior—makes 23, and its owner, Joe Verrillo, says he knows of another with an identical paint scheme in Iowa, but it’s a 427/435 car. That’s 24, by our count. At least, that’s 24 vehicles claimed to be COPOs. 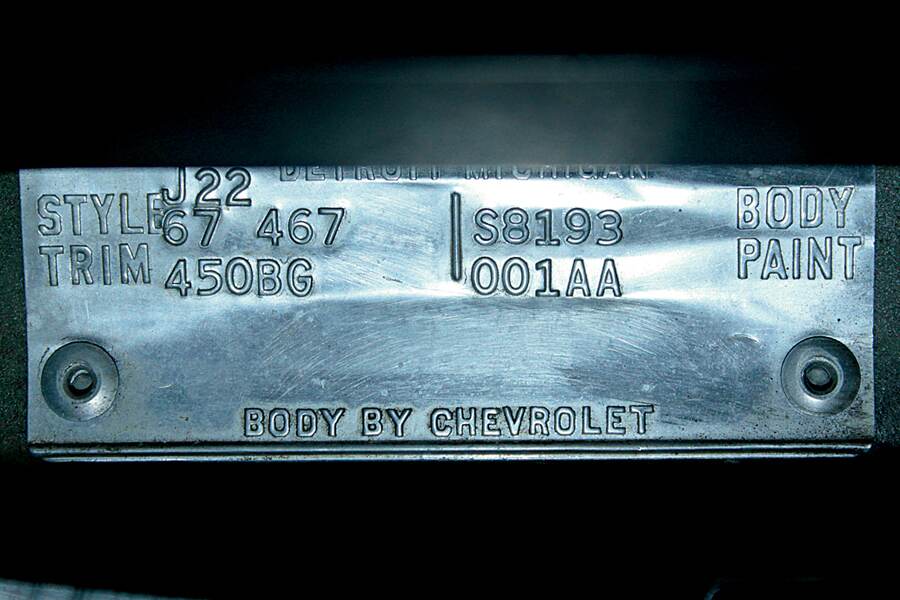 But are they all true COPO vehicles? An order for non-standard equipment or paint didn’t need an official COPO request, which required the sign-off of Chevrolet’s engineering department. As long as the special order involved colors, trim or equipment already available on other models, it was possible to simply have the regional zone manager approve the request and the order sent on to the plant for production. It didn’t necessarily require the approval of the central office in Detroit.

Of course, verifying the provenance of these vehicles requires other forms of identification. A true COPO vehicle generated paperwork and a unique order number. Those ’69 Camaros, for example, had special order numbers: 9561 for the iron-block 427 models, and 9560 for those equipped with the all-aluminum ZL1 engine.

In the case of a special paint order, a unique code was documented on the trim tag. Verrillo’s roadster shows “001” in place of the standard paint code “986” for Silver Pearl, which is the telltale of a special-order paint job. Of course, without the regular paint code stamped on the tag, verifying the original color can be very difficult on a car that has seen a re-spray or two over the years—hardly an uncommon occurrence on Corvettes of this vintage. 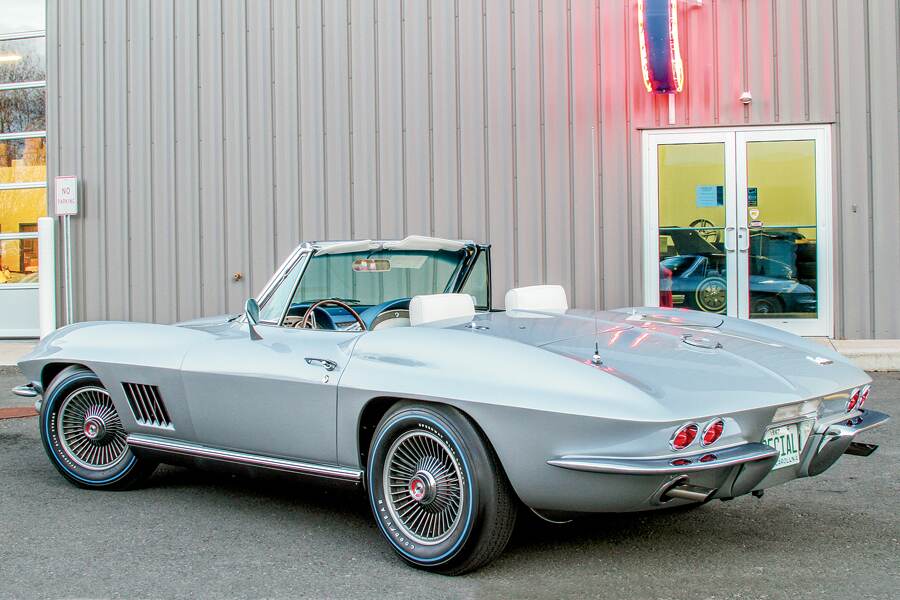 “I was looking for a small-block 1967 roadster and stumbled across this interesting car,” Verrillo says. “I thought the color combination was very elegant, and it drew me…immediately. When I saw the ‘001’ paint code, which didn’t correspond with any of the standard codes [for that model year], I knew it was something special.”

Verrillo began poring over the car, lifting the rear carpets to find the original silver color under the yellowed carpet glue, and the jack compartment with the original blue paint. The Corvette had just received a frame-off restoration, but enough of the “born with” equipment remained to help verify its originality. A number of NOS parts had been used during the restoration, too.

Fortunately, the car came with plenty of paperwork to trace its history, including a copy of the original manufacturer’s statement of origin, or MSO. Verrillo was thus able to trace its order and delivery to the now-defunct Triangle Chevrolet in Raleigh, North Carolina, where it spent all of its time until he picked it up in 2006. He even received copies of previous titles with the purchase. He wasted no time in bringing the car back to his Clifton Park, New York, shop, just north of Albany. That shop is actually his business, Prestige Motor Car Co., which sells, services and restores Corvettes. “It was very exciting to discover it was a special-order car—something that wasn’t available as a standard configuration,” he says. “I had to have it.” 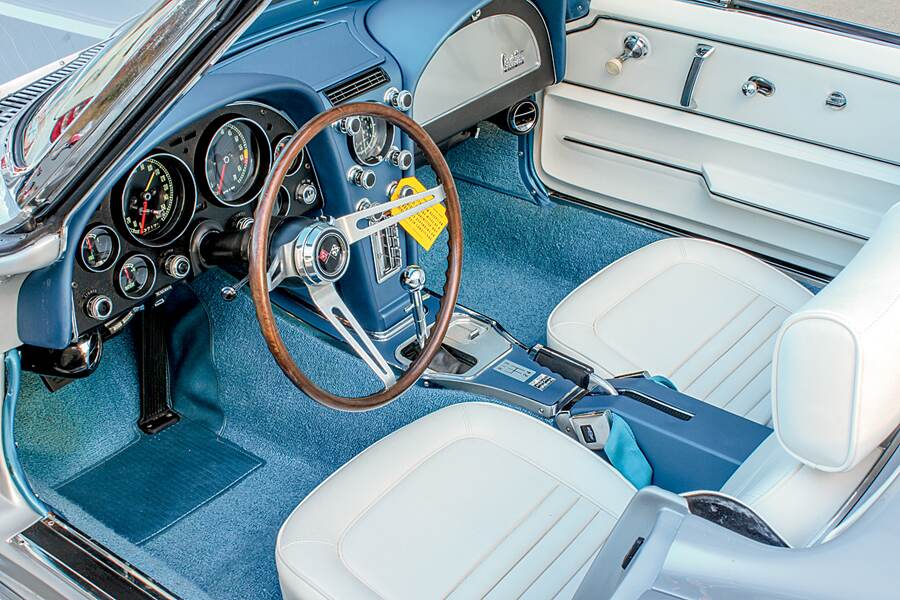 It was a highly optioned car, too, with factory air conditioning, power steering, power brakes, power windows, telescoping steering column, speed minder, tinted glass, AM/FM radio, headrest seats and the 1967-only finned aluminum bolt-on wheels—a $263 option that was selected for only 720 of the more than 22,900 Corvettes built that year. That’s only about 3 percent of the total build.

Another attribute that drew Verrillo to the car was the numbers-matching powertrain, and it was something special in its own right: a 350-horsepower L-79 327 small-block backed by a Muncie M20 four-speed transmission. Living in the shadow of its big-block cousins, the L-79 was an underappreciated performer. Its 4.00-inch bores and short, 3.25-inch stroke fostered a deep-breathing, free-revving combination that offset the big-block’s sheer grunt with a lighter package and a better front-to-rear weight balance. A high-lift hydraulic camshaft enabled the engine to rev to a 6,000-rpm redline—positively stratospheric for the time. The hydraulic lifters also made the L-79 one of the easier high-performance engines to live with, as periodic valve-lash adjustments were unnecessary.

The L-79’s cylinder heads used large, 2.02-inch intake valves and 1.60-inch exhaust valves. The air/fuel mixture funneled through the heads was mixed by a Holley 600-cfm four-barrel carburetor, and the pistons mashed the mixture at an 11:1 compression ratio. In all, the L-79 was carefully calibrated to serve up as much power as possible in a tractable, street-friendly package. 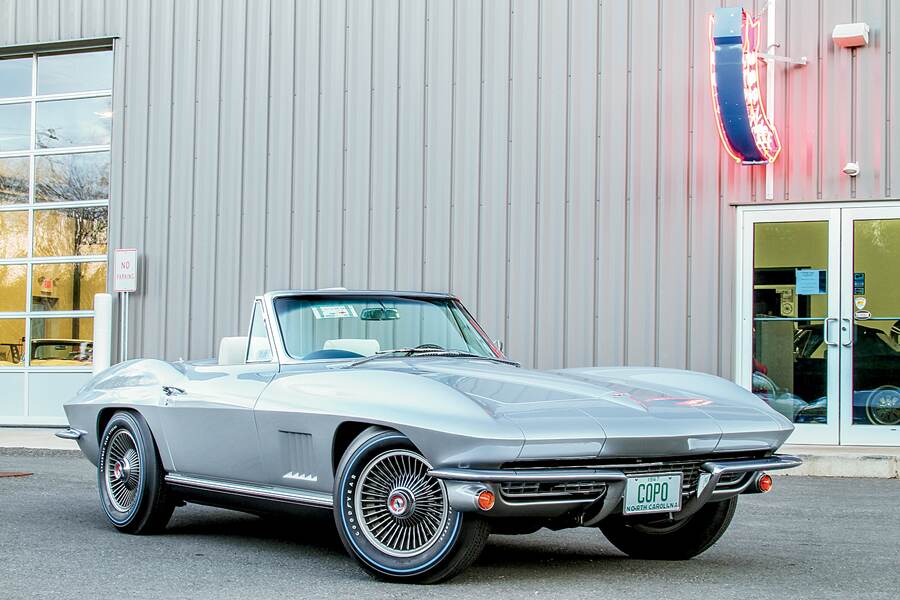 Though it undoubtedly contributed to occupant comfort, the huge Fridigaire air-conditioning compressor on Verrillo’s car also exerted no small amount of parasitic drag on the engine. It’s not surprising, then, that when GM switched from gross to net power ratings a few years later, engine outputs plummeted. Nevertheless, during our photo shoot, the zestful small-block squirted down the highway effortlessly, and looked terrific doing so.

Verrillo’s preservation and detailing of the car has been noticed and rewarded. In 2013, it drew plenty of attention and raised eyebrows at Bloomington Gold, ultimately rolling out with a Gold Award. It has also achieved NCRS Top Flight recognition and received a Triple Diamond Award at the Corvette & Muscle Car Nationals in Chicago. Indeed, the car’s rarity and unique color combination are constant sources of discussion, and Verrillo can’t quite bring himself to sell it. “I had it listed for sale on our website briefly, but I pulled it down,” he says. “I like the car too much, and it has such an interesting story. I just can’t bear to let it go right now.”

Refusing to sell a product that’s central to your livelihood may not seem like a business model that MBAs are built on, but it’s encouraging to find a dealer for whom cars—even high-value classics—are more than mere commodities. It’s clear that Verrillo is an enthusiast first, and his business reflects that. “I’ve been a Corvette guy for decades and am fortunate that my business has prospered around my passion for these cars,” he says. “We sell a lot of Corvettes every year, but this one is for me.” 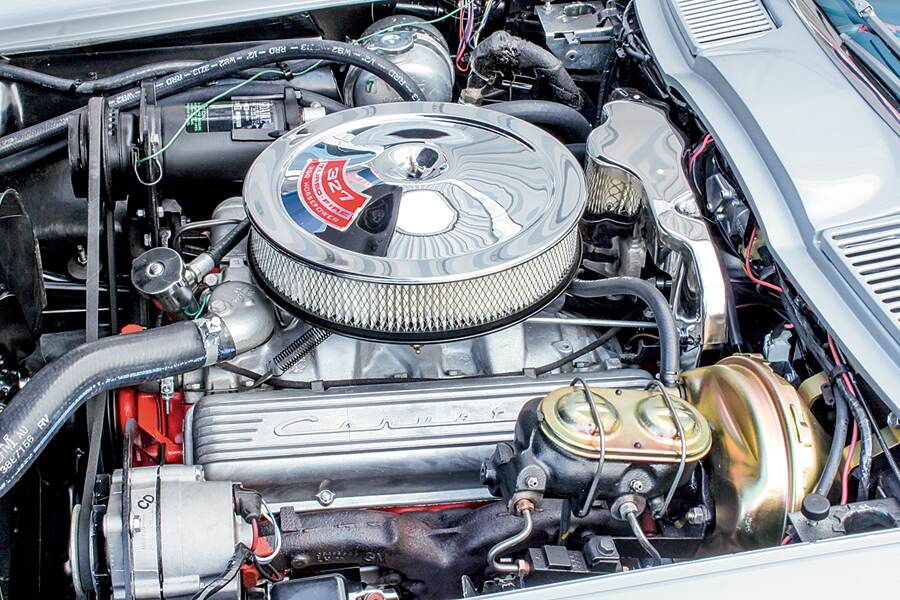 That brings us back to the COPO question. Verrillo’s car is clearly a special-order Corvette, with the paperwork to support its originality—but is it a bona fide COPO? It matters because tacking those four letters onto a classic Chevrolet generates significant collector interest and even greater value. Our research suggests that this Corvette is not, because it doesn’t feature equipment that wasn’t available on other Corvette models. Therefore, there would have been no reason for an engineering sign-off from Chevy’s central office.

To his credit, Verrillo admits the car was presented as a COPO when he purchased it, but he understands the number of true COPO cars for 1967 is disputable. COPO or not, there’s no denying that he has a one-of-kind small-block roadster. It will always be a source of discussion, and it proves that not all of the interesting ’67 Corvettes were equipped with a big-block. “It’s such a unique car, and true one-offs are so rare these days,” he says. “Whether it is a true COPO or not doesn’t detract from its historical significance.”

We couldn’t have put it better ourselves. 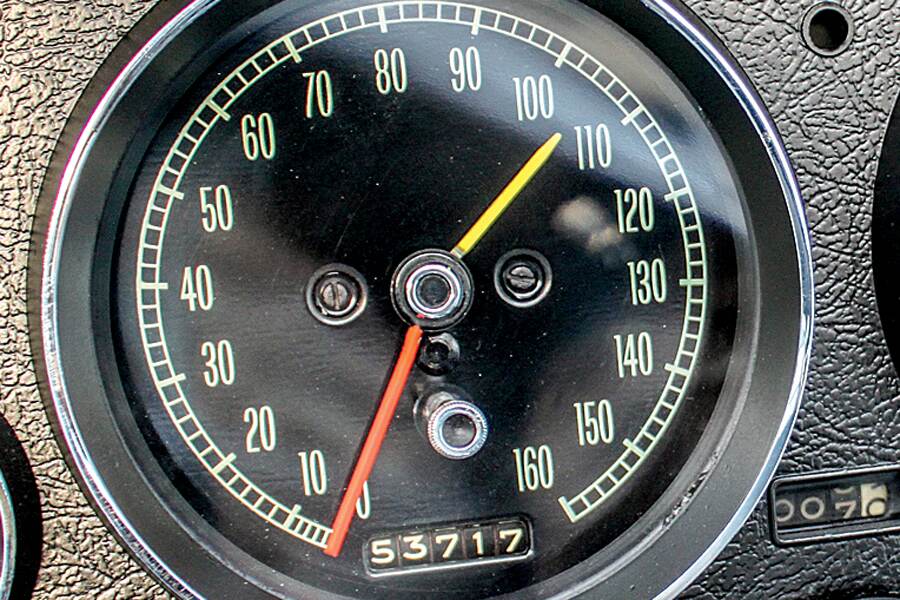 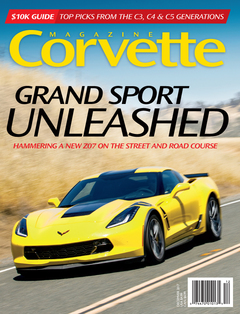