In which John Woods finds that, contrary to popular belief, being caught in a Cross-Fire is no bad thing 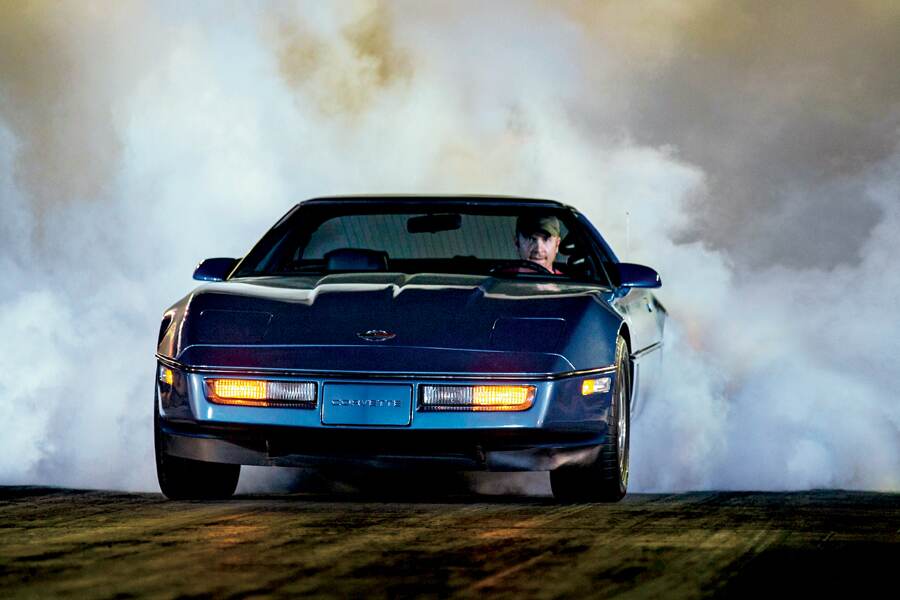 Many colorful descriptions have been lobbed at the 1984 Corvette in the more than three decades since the car’s debut, but it seems likely that the phrase “ideal drag-racing platform” is not among them. On one hand, the first-year C4 incorporated revolutionary advancements in the areas of handling, braking, aerodynamics and interior packaging, handily making it the best all-around Corvette to that date. Crack open the big clamshell hood, however, and it was 1982 all over again.

Thanks to delays in the development of a new, sequentially fuel-injected engine, the fourth-generation Corvette initially relied on the same L83 “Cross-Fire” 350 that had first appeared in the outgoing C3 two years earlier. Though generally reliable, the Cross-Fire induction setup—which used a pair of throttle bodies mounted vertically on an aluminum intake manifold—offered neither the precision fuel metering of a proper fuel-injection system nor the power-generating potential of a conventional carburetor, and as such it did little to further the new Vette’s stated role as a performance and technology leader.

It’s safe to assume that none of these factors weighed all that heavily on the mind of young John Wood back in 1992, when the seventh grader accompanied his father to check out a Medium Blue Metallic ’84 Vette the elder Wood had spotted in the classifieds. The trip was the culmination of a process that had begun years earlier, one that found the pair poring over local advertisements in search of just the right performance car. 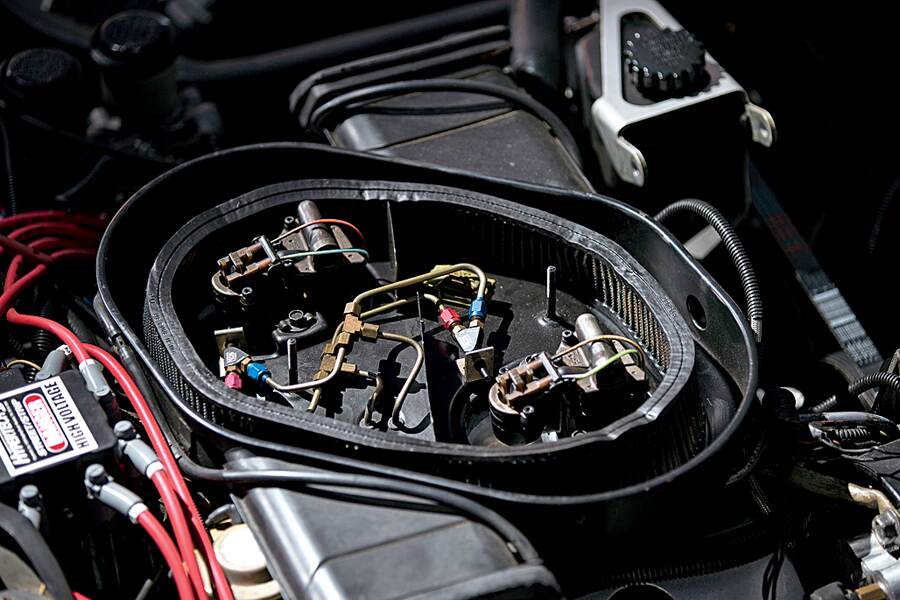 “For as long as I can remember, Dad and I would wake up and look at the car ads in the Saturday newspaper,” recalls John, now 37. “We looked at Camaros and Trans Ams, but we knew that if there was any chance to own a Corvette, that was what we would get. We were a one-income family, and it honestly didn’t make sense for us to have a car like that…but Dad and I still dreamed.”

Wood was immediately smitten with the blue-on-blue C4 his dad had found near their home outside Houston, even if the car didn’t turn out to be exactly what he expected. “Being 12 or 13 years old, I was thinking it was a curvy model like a [C3],” he says. “When I saw that 1984 Corvette parked in the garage, I was speechless. All those years of searching, and now we were looking at a car that was almost identical to a brand-new one. I was blown away.”

Apparently his father was, too, and it wasn’t long before Mr. and Mrs. Wood were sketching out a fiscal strategy that would allow them to bring home the car. Eventually they were able to make the numbers work, and the ’84 became the newest member of their family. 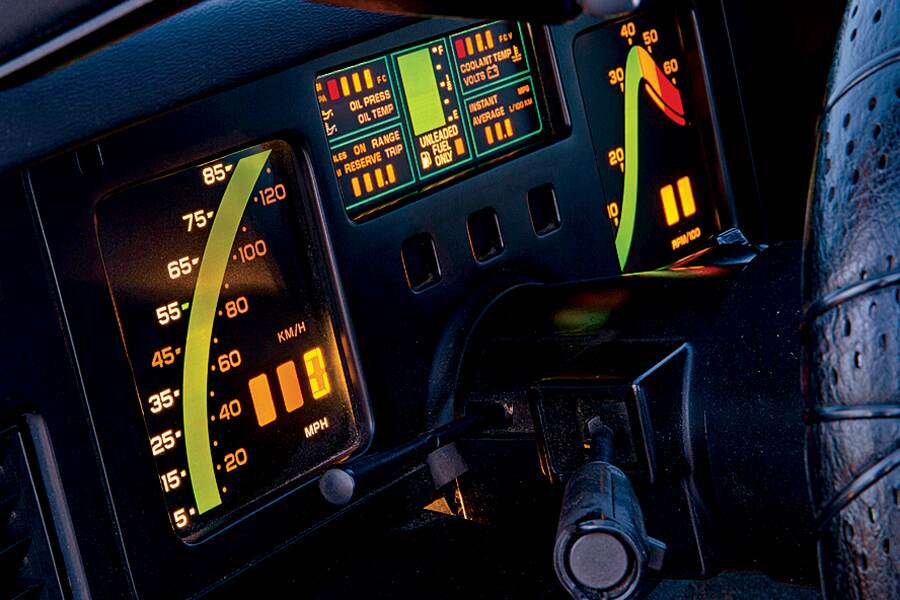 It’s something of an auto-writing cliché to overstate the significance of the bond between a car and its owner, but in the case of John Wood and his C4, the relationship seems genuinely profound. “There were many nights and weekends when [my father and I] worked on the car,” Wood relates, “and the life lessons I learned then continue to help me to this day. Having the Corvette in my life kept me…on the right path as cars became my hobby.”

Wood also passed a number of life milestones with the C4, chief among them meeting the girl who eventually become his wife. “I was driving home in our neighborhood, and she had just gotten off the high-school bus,” he says of the fortuitous encounter. “I gave her a ride home that day, and that started 20 years of being together.”

As we hinted earlier, the Corvette also served as Wood’s unlikely entrée into the world of drag racing, reigniting his love affair with the car along the way. “Once I started college, the car sat for some time, and Dad approached me about [selling] it,” Wood admits. “We spoke and decided…to mod it and see if we could get some more [quarter-mile] times out of it.” 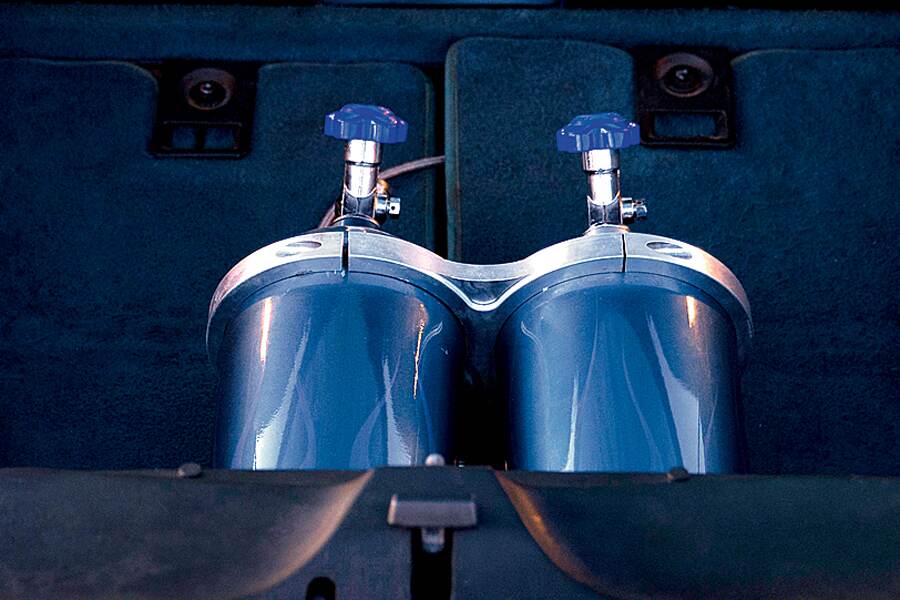 Unsurprisingly, the C4 had not covered itself in glory with its initial drag-strip forays, managing the 15-second elapsed times one would expect of a stock ’84 model. But Wood sensed that the car had potential, and along with his father he formulated a plan to extract maximal accelerative gains on a minimal budget.

In keeping with general hot-rodding convention, Wood began with a clever scheme for getting more—and cooler—air to the engine’s induction system. It seems Chevy engineers had already done much of the work in this regard, allowing Wood to create a low-buck “ram air” setup via the tactical application of a hole saw.

“Some guys on the forums came up with an idea to match the hood’s [built-in] air tunnels to outside air,” Wood says. “It looks like GM designed [the system] for this initially, but when gas regulations came around, they had to suck hot air off the engine instead to get more mileage.” 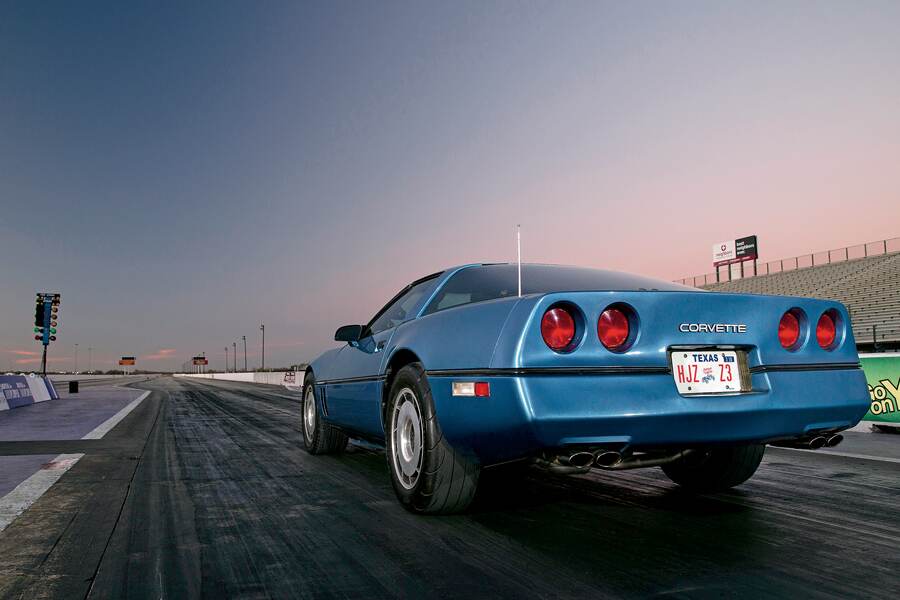 Wood’s theory is supported by an early cutaway drawing he provides us, one that clearly shows a network of hood ducting leading directly from the high-pressure area at the nose of the car to the Cross-Fire manifold’s driver-side air inlet. Although in its final configuration the system was blocked off at the front, causing the aforementioned “suckage,” it was a simple matter for Wood to cut three round holes in the plastic radiator shroud to create a bona fide cold-air induction setup. That simple modification, along with a set of Crane 1.6-ratio roller-tip rocker arms and a pair of BFGoodrich drag radials, took a substantial bite out of the Corvette’s ETs, putting it on roughly equal footing with the later-model, L98-powered C4s. “We went from 15.0s to 14.3s,” Wood reports. “This blew us away, and we were hooked!”

Swapping out the tallish 3.08 rear-end gear for a more acceleration-friendly 3.73 produced a high-13-second time, about what one would expect from a stock ’92-’96 LT1 automatic. But despite being “ate up with these results,” as Wood colorfully puts it, he was by now well and truly committed to the goal of pushing his L83-powered Corvette to the limit of its capabilities.

To that end, he and his father installed an NOS nitrous-oxide system configured to furnish an additional 125 chemically cooled horses. They were rewarded with a 12.5-second pass, comfortably quicker than the low 13s they’d been expecting. “We were shocked that a 205-hp car that many refer to as the ‘Mis-Fire’ was taking so well to these mods,” says Wood. “It just shows that applying basic science to a 350 Chevy will produce power. 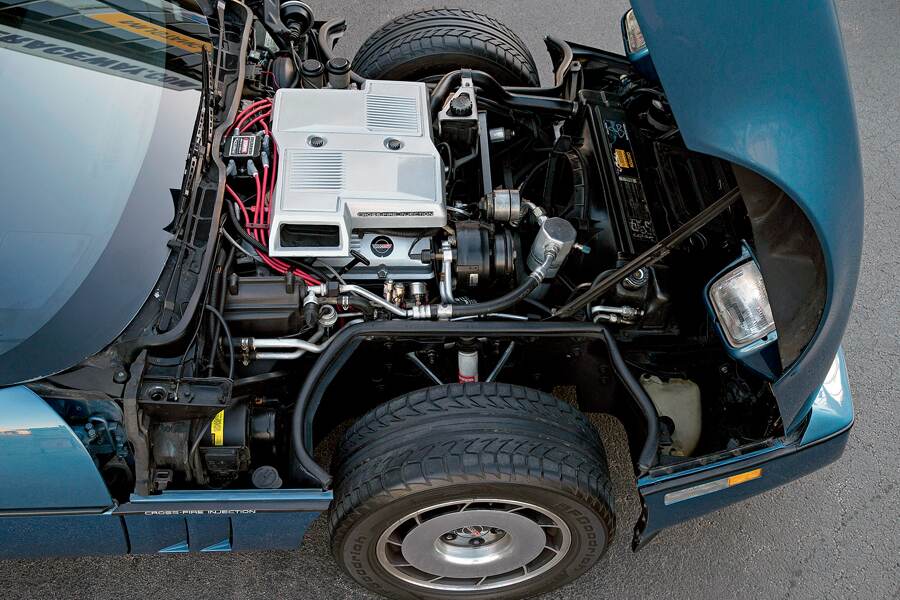 True that, though as Dirty Harry Callahan famously observed, a man’s got to know his limitations. In the case of Wood and his ’84, comeuppance arrived in the form of another, much newer GM performance car, one whose powerplant has always been regarded as something of an overachiever. “A close friend with a modded LS1 Trans Am asked to run us at the track,” Wood relates. “We did, and I got beat—12.5 to his 12.1. This didn’t feel that great.”

Stung by the setback, the Woods dived back into the C4’s engine bay to perform some additional performance tuning. After contemplating and dismissing internal engine modifications, the pair decided to try reducing the L83’s ignition timing while simultaneously bumping up the nitrous system’s output to 150 hp. This “one step forward, one step back” approach had the desired effect, yielding a C7-slaying 11.7-second ET. So satisfied were the Woods with the car’s performance at this stage that they took the radical step of indefinitely delaying any additional alterations.

When they did resume their tweaking a few years later, it was thanks to a particularly hot-rodder–friendly section of Texas state law. “At this point the car was over 25 years old, so we could legally bypass emissions,” explains Wood. “We pulled the air pump, removed the catalytic converters and installed headers.” 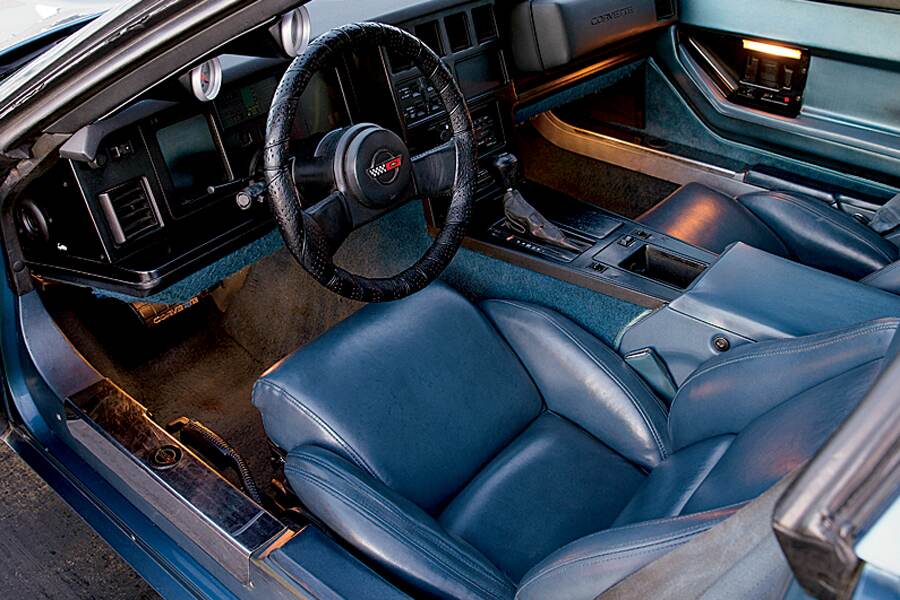 The Corvette responded with a best-ever 7.6-second eighth-mile sprint, but the refusal of the stock 700R4 transmission to shift into high gear kept the car from improving upon its previous best of 11.7 in the quarter. To Wood, it was a sign that the car had reached a turning point. Having accomplished far more than he’d ever expected with his Cross-Fire ’84, he decided to retire it from drag racing for good.

It was in this newly sedate role that the Corvette played its most important role yet, as a bulwark of stability and a catalyst of family cohesion in a difficult time. It was 2008, and Wood was planning to take the car to the Corvette Chevy Expo, a large, marque-specific car show held each year in Houston. “It was going to be a special one, as it was the first [Expo] I ever did,” he says. “But it was also days after my mother lost her battle to cancer at only 57 years old. I was going to cancel the trip…but my dad and wife pushed me to go, and I ended up winning First place in my C4 class. The judges said that the car did so well thanks to its story…and all the hard work behind it.”

These days, Wood, who serves as the media director at Royal Purple Raceway in Houston, continues to drive the ’84, though typically only to shows, drag-racing events and other special car gatherings. He does not want for automotive exhilaration, however, thanks to the two other Corvettes currently in his possession. 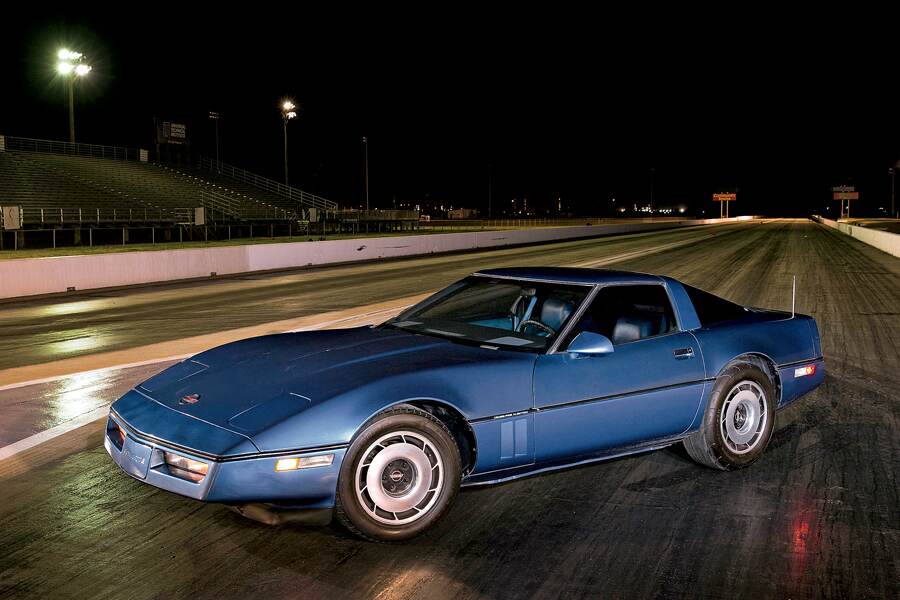 While Wood may have graduated to much more serious performance machinery, it’s clear that the ’84 will forever hold pride of place in his Corvette stable. In speaking with him, it’s also apparent that the story of this beloved C4 has at least a few more chapters yet to be written.

“I don’t know what is next with this car, but I do look forward to letting my seven-year-old daughter drive it someday,” Wood says. “It doesn’t ride smooth, and the A/C doesn’t blow that hard, but the stories we can share while driving it, and her eyes every time she walks in the garage and sees it, make me the happiest dad on the planet.” 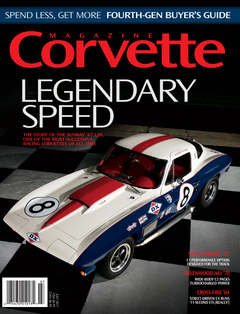