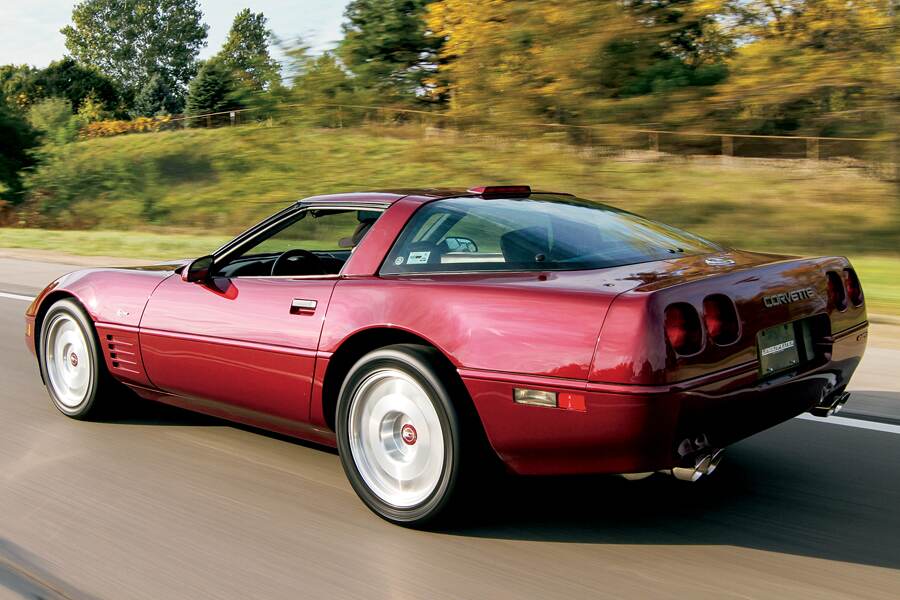 It’s difficult to overstate the significance of the C4 ZR-1 upon its introduction. In the years leading up to it, rumors swirled and grainy spy phots of a royally dubbed “King of the Hill” high-performance variant captured the imagination of countless enthusiasts. At a time when any new vehicle with more than 250 horsepower was virtually guaranteed the cover of an automotive magazine, this first-ever Corvette supercar promised to be a game changer.

When its extra-wide 315/35ZR17 Goodyear Eagle ZR rear tires finally lit up the pavement in 1990, the ZR-1’s exotic LT5 DOHC V-8 was hailed as a marvel of mechanical achievement, and its 375-horsepower output equaled that of the Ferrari Testarossa’s V-12. The engine was famously developed in a joint venture between Chevrolet and Lotus, and assembled by marine-engine manufacturer MerCruiser.

Chevrolet indeed made a statement that its flagship performer could run with the world’s best. Everyone agreed. Unfortunately, they didn’t exactly acknowledge it with their wallets. Despite an initial stampede for the first few cars off the line, demand for the roughly $30,000 ZR-1 option—applied on top of the $32-$37K tab (depending on model year) for a base C4 coupe—quickly waned.

Sales peaked in the first year at 3,049 and dropped by a third the following year, when all Corvettes received a convex rear fascia that had previously been exclusive to the ZR-1. The loss of a unique visual identity further suppressed sales, as many came to view the ZR-1 as nothing more than a very expensive engine option. Sales dropped to 502 in 1992 and were metered by Chevrolet thereafter, with 448 built in each of the car’s three remaining model years. It was a lamentable end to a project with the grandest ambitions. 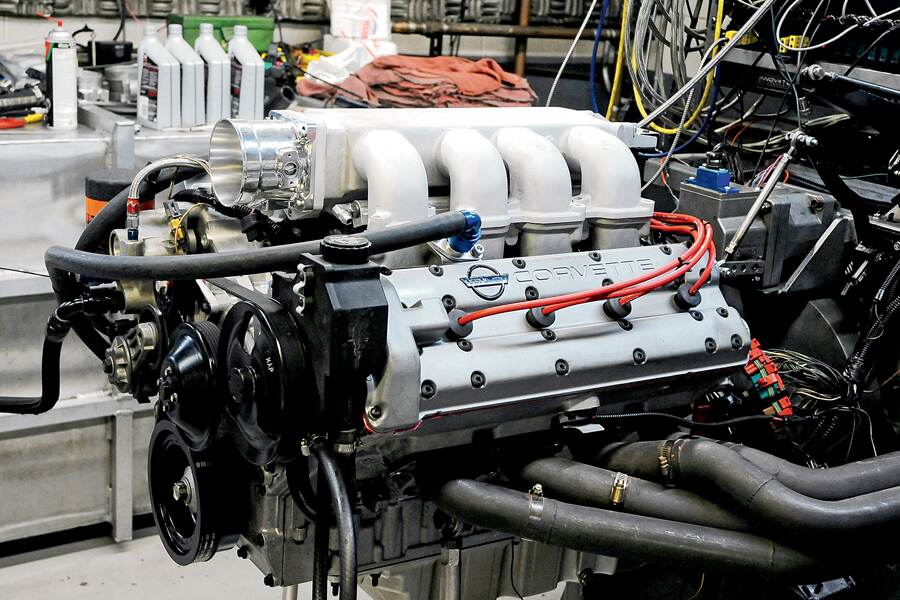 During the ZR-1’s production run, the horsepower rating was increased from 375 to 405 hp, thanks mostly to camshaft, cylinder-head and valvetrain revisions. That’s no secret. But what most enthusiasts don’t know is that there were plans for another updated LT5 waiting when the decision was made to discontinue the ZR-1—one targeted at 475 naturally aspirated horses and originally scheduled for the 1995 model year.

Graham Behan was an engineer who joined Lotus a couple years after the LT5 project began secretly in the mid-1980s. He was eventually charged with overseeing the enhancements for the 405-hp “Gen II” LT5 used in the 1993-’95 cars. Along with head and cam improvements, the blocks of those engines were also strengthened, in part through the use of four-bolt main-bearing caps. Such continual improvement pushed Lotus into the development of the Gen III LT5, again with Behan at the helm, but Chevrolet pulled out the rug before the first prototype could be assembled.

“It was disappointing when the end came, because there was so much potential in the basic design,” says Behan. “We had a team of young, eager and dedicated individuals who gave the maximum effort to bring the LT5 to life—and we felt there was more to do with it.”

Interestingly, Chevrolet notified Lotus of their intention to dethrone the King in the fall of 1991, announcing they’d build the car through 1995, but there was no need to continue further development work beyond the Gen II upgrades. In fact, the last LT5 production engine was built in November 1993. 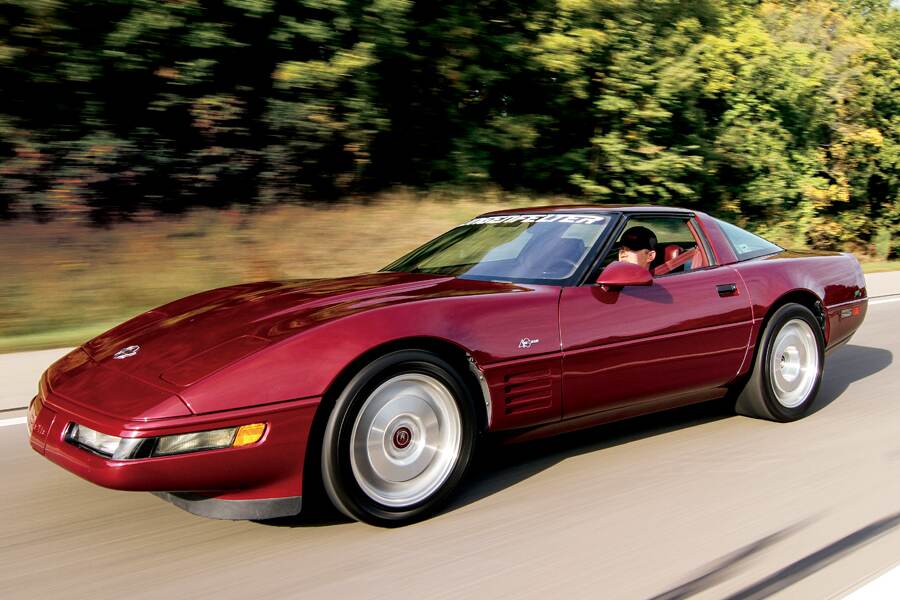 Behan eventually left Lotus, settling in the U.S. after a stint at GM’s proving ground near Detroit during the LT5 days. He then went to work for Lingenfelter Performance Engineering in Indiana. In 1998 he received a package from a former colleague containing a variety of prototype parts from the Gen III project, including cylinder heads, pistons, an intake manifold and more. According to Behan, there were still machining chips in the cylinder head when he opened the crate, as the parts had been unceremoniously boxed up and stashed. They were headed for the trash bin, too, when that colleague rescued them.

Behan carefully stored the one-off parts and cultivated a plan to one day build that next-gen LT5. The opportunity came nearly 20 years later, when Behan’s boss, Ken Lingenfelter, greenlighted the project on company time. And more than simply building a dyno queen, Lingenfelter even purchased a 1993 40th Anniversary ZR-1 (one of 245 built) to use as drivable showcase of the Gen III’s capability.

“The parts had been created, but we never got to build the first prototype Gen III engine,” says Behan. “As an engineer and I wanted to see whether the engine would achieve the target power originally conceived for it.” 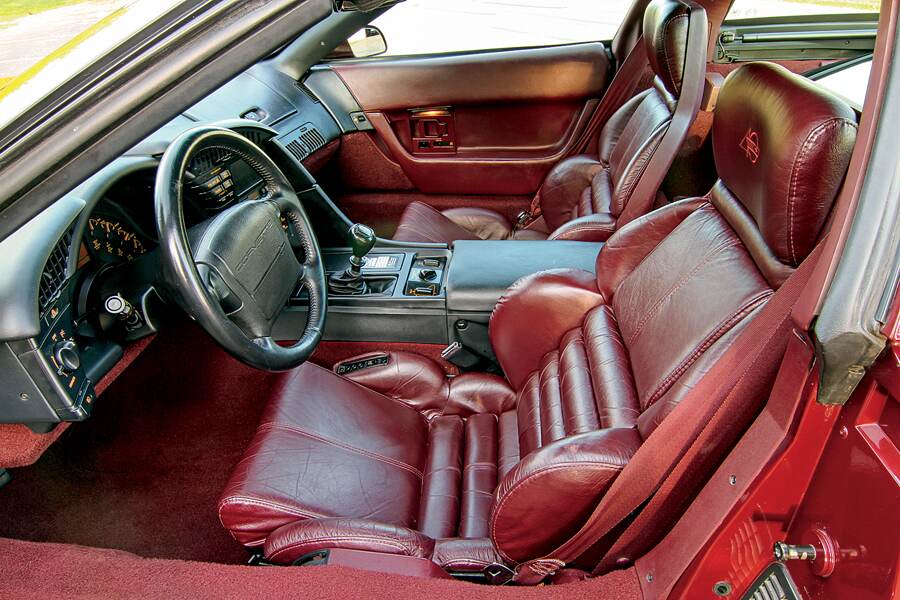 Along with building more horsepower into the next-gen LT5, which would retain the same 5.7-liter displacement (3.90 × 3.66-inch bore and stroke) as the original, reducing emissions was arguably more important. That meant changing everything from the combustion-chamber design to the pistons and even the Nikasil-coated aluminum cylinder liners.

The first- and second-gen engine blocks featured fire rings at the top of the cylinder liners, which were used to ensure cylinder-head sealing. Unfortunately, they also contributed to emissions by trapping hydrocarbons, and they promoted detonation. New cylinder liners without fire rings were used with the Gen III design, along with a new head-gasket design.

Additionally, the next-gen pistons were redesigned with emissions performance in mind, including a raised top-ring configuration to reduce hydrocarbon output. They also featured a revised skirt design and were lighter, in anticipation of higher-rpm performance. Finally, the new slugs employed a flat-top profile, rather than the Gen I/Gen II’s dished design, giving the Gen III proof-of-concept engine a stout 11.4:1 compression ratio.

The Gen III cylinder-head design is arguably the most significantly altered element of the engine, with an all-new, emissions-driven combustion chamber and reconfigured ports. The chamber is larger and has a more conventional pent-roof shape than the high-swirl “cloverleaf” design of the Gen I/Gen II. Again, the change was intended to reduce pollutants, but overall airflow through the new head is about 10-percent greater than the Gen I/Gen II, according to Behan. The heads also use only eight fuel injectors, rather than the Gen I/Gen II’s 16-injector design. 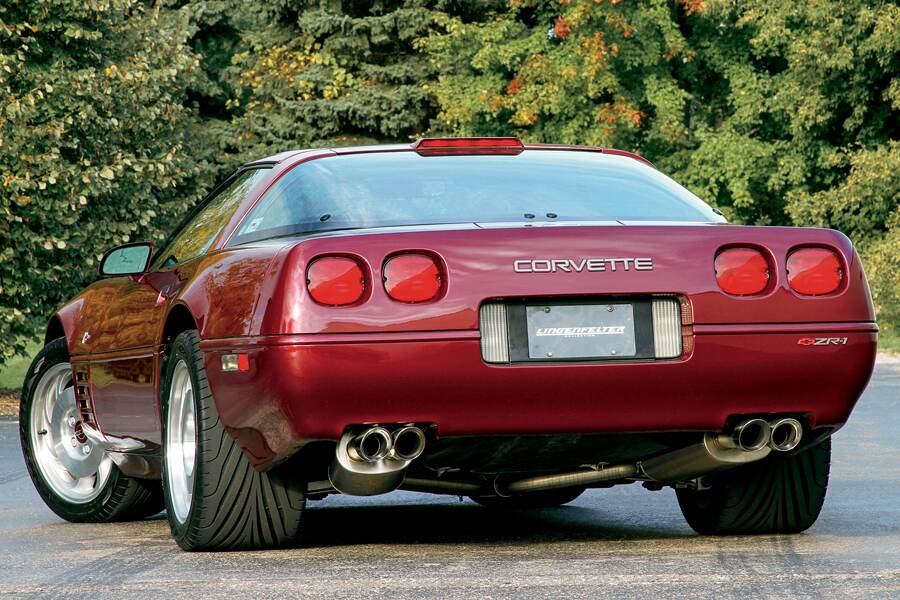 “We were working toward OBD-II standards of emissions and engine control,” he says. “The ‘squish’ pattern of the original cloverleaf combustion-chamber design just wouldn’t cut it for the upcoming emissions standard, but the change nonetheless proved effective at building high-rpm horsepower.”

When it came to the camshafts, Behan had to compromise somewhat, because the box of parts contained a number of high- and low-lift intake and exhaust cams that were intended to support a planned variable valve-timing system. Unfortunately, a pair of high-lift intake cams wasn’t in the mix, so he made do with a quartet of high-lift exhaust profiles, which nevertheless offered 0.445-inch lift and 239 degrees duration.

“The [real] intake cams would have delivered a little more lift and…duration,” says Behan. “That probably cost us about 30 horsepower in the end, but we worked with what we had, using all the prototype parts at our disposal.”

The Gen III’s intake manifold is a true one-off and was originally designed to support the early application of an electronic throttle assembly. There wasn’t a prototype throttle body in the parts box, however, so a conventional cable-type unit was used to preserve compatibility with the 1993 ZR-1’s OBD-I engine-control system. It also drives the eight injectors simultaneously as if they were secondary injectors. 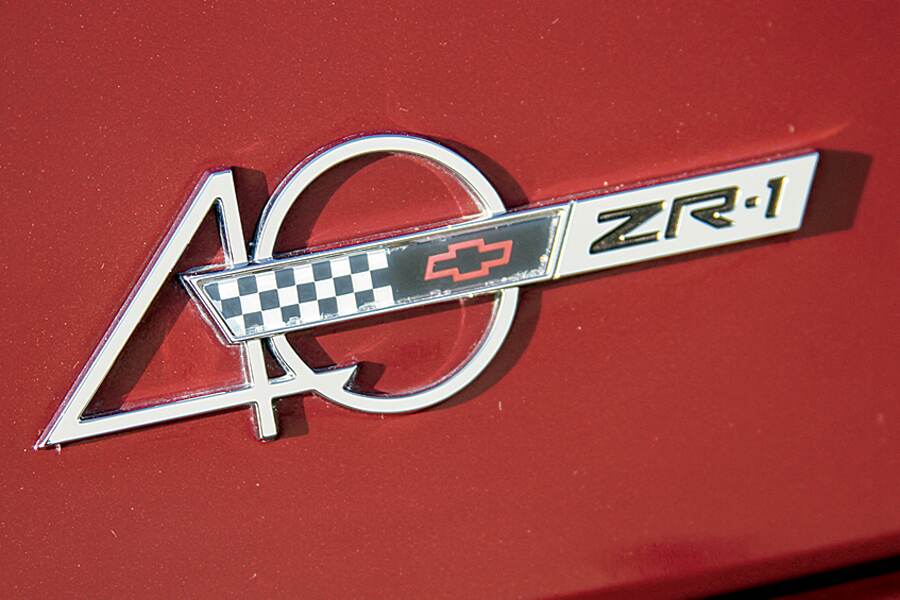 Winding out to a spine-tingling 7,200 rpm, the Gen III LT5 produced 528 hp and 431 lb-ft of torque on Lingenfelter’s engine dyno. That was without any accessories dragging on the engine, a test procedure that duplicated the original SAE 24 tests about 25 years ago. According to Behan, the Gen II engine produced 445 horses without accessories during testing, which is about 10 percent more than the 405-hp rating in the car. That means the Gen III’s output is pretty much spot-on for the 475-hp target when the accessories are added, proving the engineers a quarter-century ago had their slide rules accurately calibrated.

“One of our guys worked out the numbers himself on a piece of paper, using a calculator,” Behan says. “He projected the peak horsepower would come at 7,200 rpm, and that was exactly where we saw it with this engine, along with horsepower that was also on the mark. That was very satisfying to verify after all these years.”

As installed in the Lingenfelter ’93 ZR-1, the engine has a wonderfully aggressive bark through a Corsa exhaust system. It’s a tight, low-mile car shod with grippy Goodyear tires, and as such it provides a close approximation of what the Gen III ZR-1 driving experience might have felt like back in the mid-’90s. The naturally aspirated C6 Z06 is the closest comparison in terms of accelerative performance, though that car is a couple hundred pounds lighter and packs another 30 or so horses. You can discern that behind the wheel, but the LT5’s power band is different and, not unexpectedly, rewards the senses the higher it’s revved. The multi-cam V-8’s mechanical wail is soup for the automotive soul.

As for the legacy of the LT5 and its stillborn third generation, those Lotus engineers didn’t let their hard work go to waste. Finger-follow-type variable valve timing was also planned for the engine, according to Behan, which allowed switching between high-lift and low-lift cam profiles at different engine speeds. Lotus sold the technology rights soon after the LT5 project ended, and it was eventually picked up by Porsche and even Honda for its VTEC engines. Additionally, the LT5’s hard-mounted accessories and semi-structural oil pan were technologies that would be introduced on the LS1 in 1997.

Behan is philosophical about the engine and his involvement in the project, suggesting GM did what it needed to do, even if the potential for the Gen III engine wasn’t realized.

“The original LT5 was a statement Chevrolet and GM had to make at the time, and they succeeded,” he says. “I saw mockups of the LS1 while we were working on the LT5, so I knew what the future held. A lot of good people put their best effort into the LT5, and the fact the engine was short-lived doesn’t diminish the overall accomplishment. It was a hell of an engine with lasting influence.”

Indeed it was. And with this one-of-none proof of concept finally built, there will always be a reminder of what it could have been. 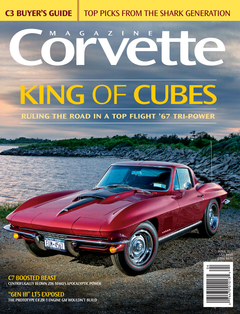