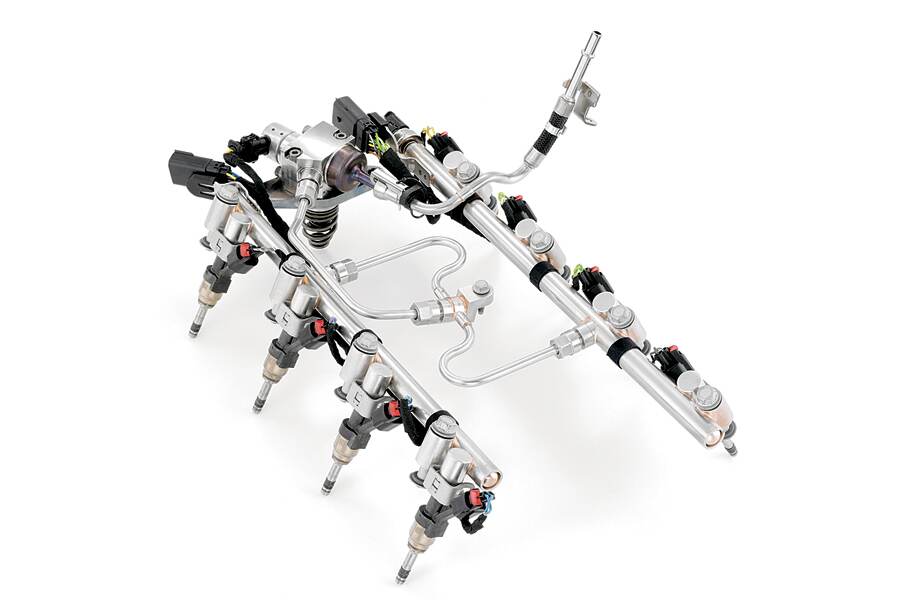 Photos by the author and courtesy GM

A decade ago, base Corvettes had 400 horsepower. Today, the Stingray’s small-block V-8 has 460, thanks in large part to the use of direct fuel injection. Incredibly, gasoline direct injection—“GDI,” or just “DI”—also allows the C7’s Generation V LT1 to generate lower exhaust emissions and better fuel economy than did the traditionally injected LS2 of 2006.

DI was invented in 1902 by Frenchman Leon Levavasseur. (Corvetters owe Levavasseur a lot: He also invented the V-8.) Germany widely used a Bosch direct-injection system on its World War II aircraft engines, notably the Daimler-Benz DB601, an inverted V-12 found in the Messerschmitt Bf-109 fighter. Near the war’s end, the first American direct-injection system was employed on the Wright R-3550 radials powering the Boeing B-29 bomber.

The first use of fuel injection on an automotive gasoline engine was in the 1954 Mercedes 300SL. The famed “Gullwing” had a 3-liter SOHC straight-six fitted with Bosch DI derived from the wartime DB601. It generated 215 hp, which was impressive output for the era. 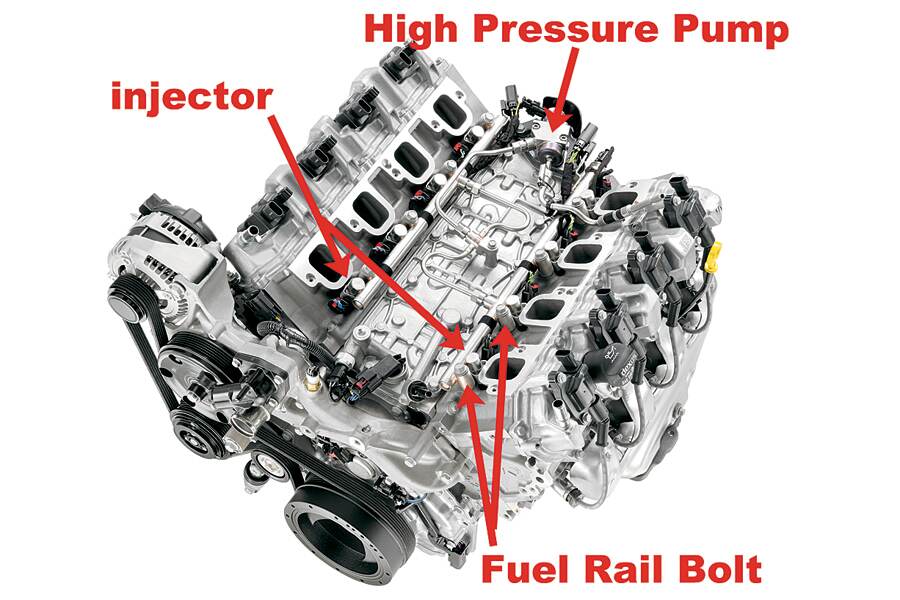 The second production car with fuel injection was the ’57 Corvette, but the Vette used an “indirect” port-injection system. Not until the late 1990s, with the availability of powerful engine computers, did DI become practical for use in high-volume applications.

GM’s first DI engine was an Ecotec four-cylinder used in some 2004 European models. The company’s first North American DI engine was the 260-hp turbo 2-liter Ecotec found in the high-performance variants of the 2007-2010 Pontiac Solstice and Saturn Sky. By 2010, numerous GM four- and six-cylinders had DI. And starting in 2014, the technology found its way into millions of V-8s installed in full-sized trucks, Camaros, Cadillac CTS-Vs and, of course, Corvettes. 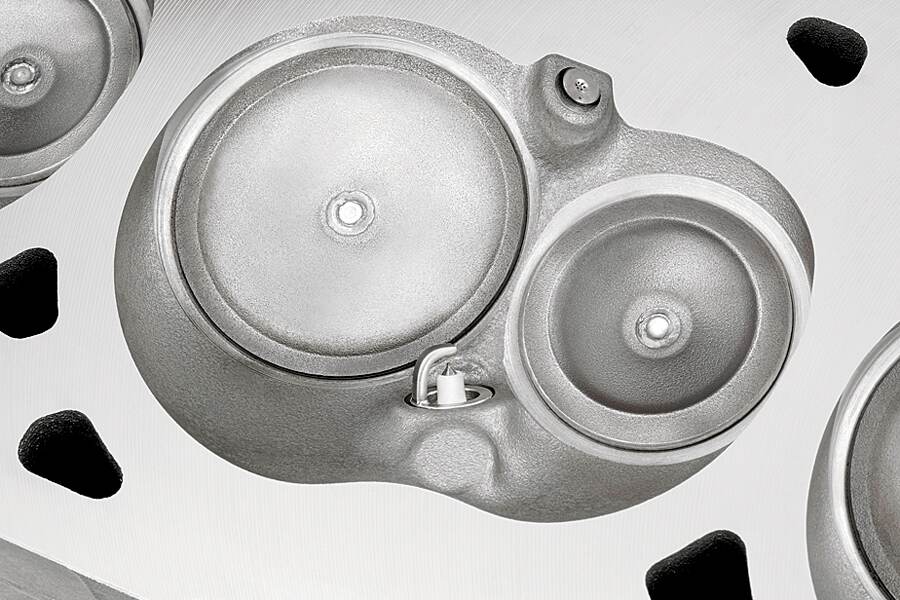 The payoff is huge. A decreased propensity for knock allows a higher compression ratio, which increases torque and thermal efficiency while also improving fuel economy by 2 to 3 percent. DI’s charge-cooling effect, meanwhile, raises the volumetric efficiency of the engine, further improving performance.

Remove an LT1’s engine covers and most noticeable is what you don’t see: a fuel rail or injectors. These can be found under the intake manifold. A high-pressure fuel pump, mounted where the distributor was on Corvette engines up until 1992, is also hidden there. 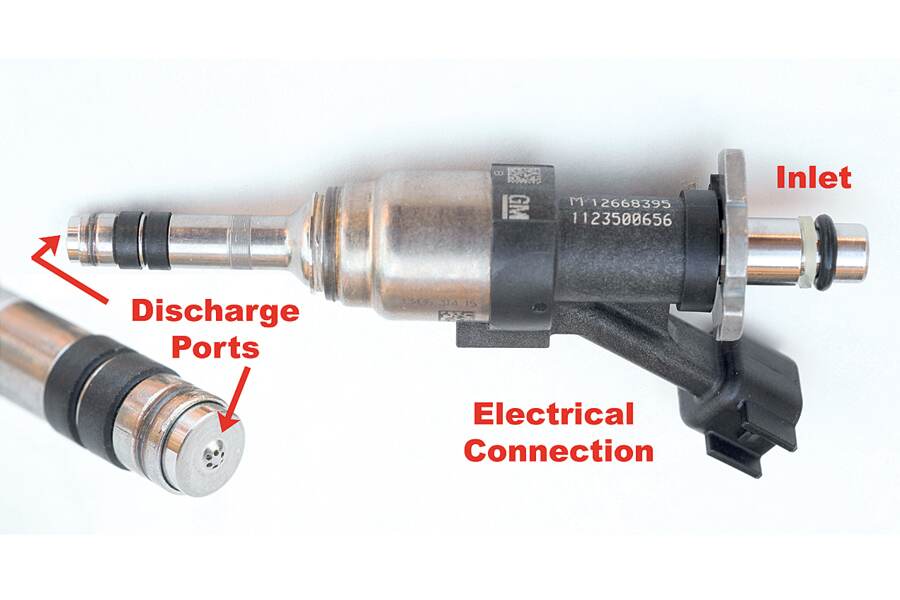 DI injectors are longer because they extend though the head into the combustion chamber. They are also more robust, for a couple of reasons. First, they have to withstand nearly 3,000 psi of fuel pressure. Second, their tips must survive temperatures of up to 1,000 degrees (F) or so, rather than the few hundred degrees they’d experience in the intake manifold.

The time DI has to deliver fuel is about a quarter of that for port injection. However, around the same amount of fuel must flow, so the levels of pressure in, and flow through, a DI injector are higher. For example, a 2013 LS3 injector is rated for 42 lbs/hr of fuel flow. A 2014 LT1 injector, meanwhile, is rated for 160 lbs/hr. That high flow, along with the requirement to inject fuel against cylinder pressures of up to 1,500 psi, means DI fuel pressure ranges from 290-2,175 psi, rather than the 60 psi of a port-injection LS3.

DI injectors are different electrically, too. Whereas GM port injectors are usually high-impedance “saturated” types running on 12 volts, injectors in an LT1 or LT4 are low-impedance “peak and hold” units running on “high then low” voltage. They open on 65 volts supplied by a boost capacitor; after that, 12 volts hold the injectors open. Peak-and-hold injectors open quicker, and that gets fuel flowing sooner. 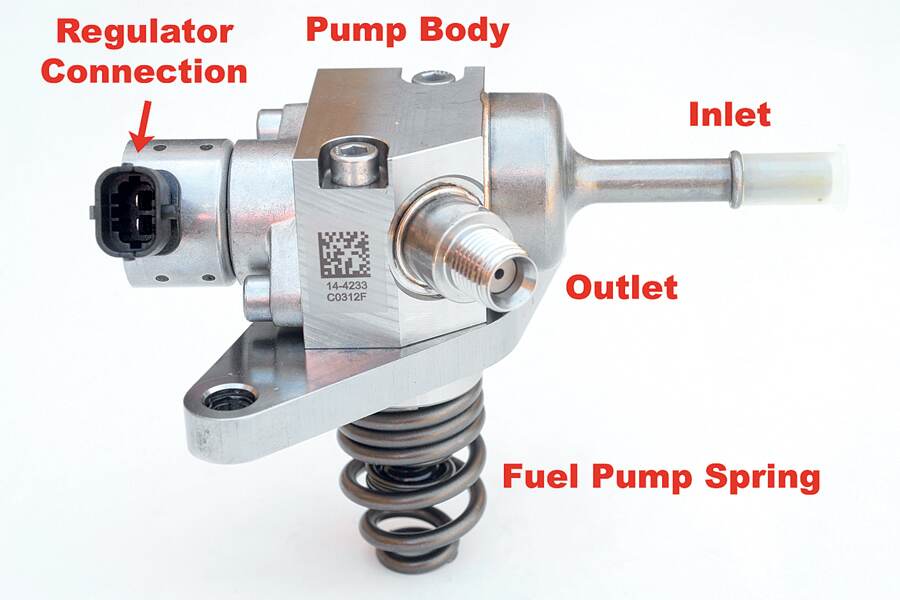 The fuel-supply system is also different. There are two pumps, both with computer-controlled, pulse-width-modulated regulators. A tank-mounted electric pump generates between 46-84 psi and sends fuel to a second, mechanical pump on the engine. To step pressure up to the 290-2,175-psi needed by DI requires a powerful positive-displacement pump driven off the rear of the camshaft. A fuel-pump roller-lifter assembly in the back of the lifter valley actuates the pump’s pushrod.

In addition to having more-robust construction, a DI fuel rail is connected to the fuel lines with compression fittings instead of spring-loaded quick disconnects. In this configuration, the rail bolts to the head and clamps the injectors in place rather than retaining them with spring clips. Finally, the injectors themselves have Teflon seals rather than conventional rubber O-rings. 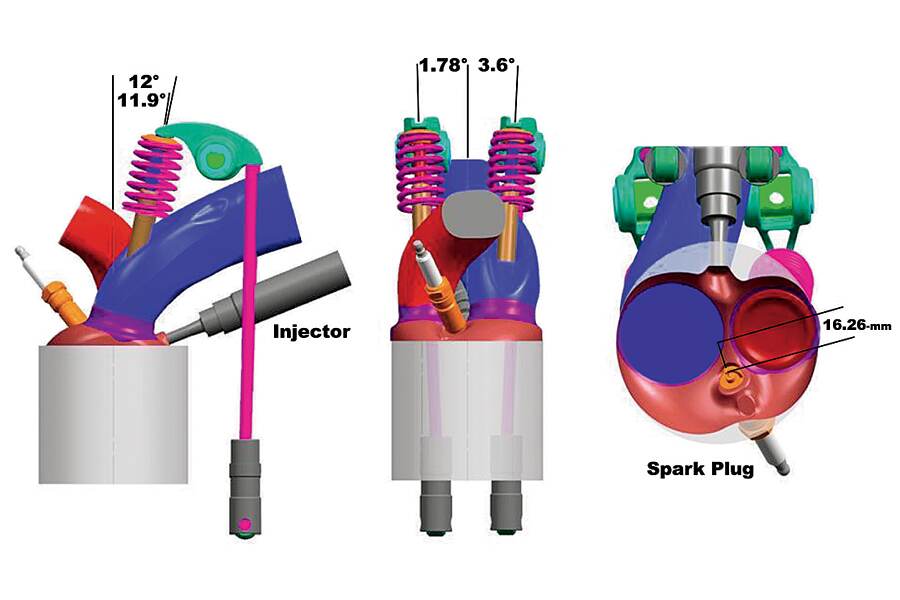 The use of direct injection required changing the engine block, to accommodate the high-pressure fuel-pump mechanism, and the heads, to accommodate the DI injectors. Additionally, the team at GM Global Propulsion Systems (GPS) knew that these new engines would have meet ever-more-stringent exhaust-emissions and fuel-mileage standards. These requirements led to an upgrade of the engine’s entire combustion system.

That upgrade is a complex topic—so much so that that the engineers who worked on it published a 32-page Society of Automotive Engineers technical paper on it. We don’t have 32 pages to spare, so suffice it to say that, aside from DI, the key enablers of the Gen V engine family’s improved all-around performance included getting as much air into the cylinders as possible, and optimizing the efficiency of the combustion process at every stage.

The LT1 head went through four major iterations before GM GPS arrived at the right combination. The starting point was the C6 Z06’s LS7 head fitted with a direct injector. The final version shares the LS7’s 12-degree intake-valve angle and its 1.8:1 rocker ratio, but that’s about all. The exhaust-valve angle was reduced by .1 degree, and the valves were splayed 5.4 degrees. Valve sizes were reduced to 2.13 and 1.59 inches for the intake and exhaust, respectively. The spark plug moved 6 mm closer to the center of the cylinder, and the injector was mounted opposite the spark plug. 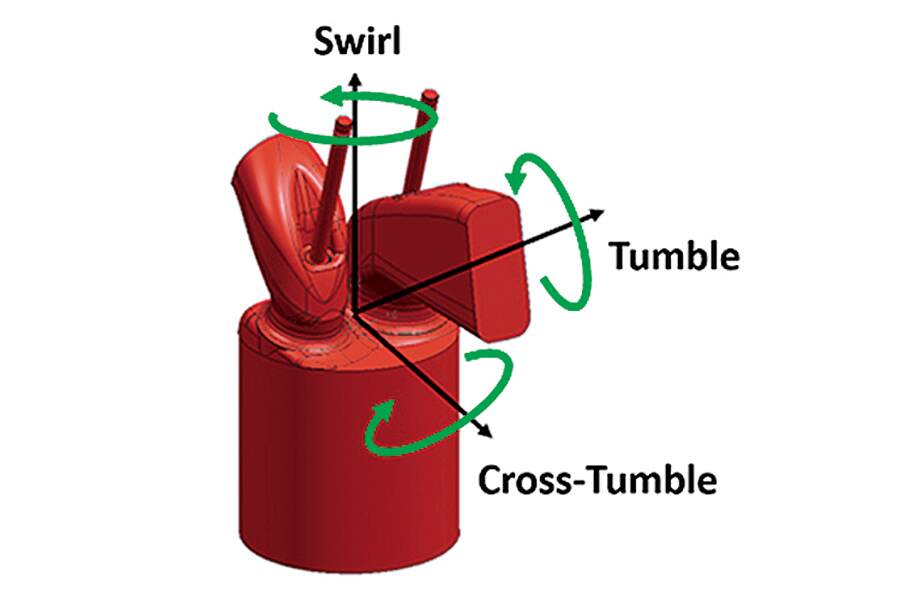 Port locations, shapes, lengths, cross-sectional areas and flow velocities were all changed as well. To give the intake port a more direct path between the pushrods, the valve positions were reversed. The exhaust port was a challenge because manifold packaging limitations made a traditional straight port impossible. A counterintuitively S-shaped port was designed and, after much development work, made to meet flow targets.

Combustion engineers have known for decades that the swirling charge air found after the intake valve can help optimize the air/fuel mixture. Combustion science has become so sophisticated that today engineers employ three specific movements—swirl, tumble and cross-tumble—to ensure the intake charge is fully mixed. In the Gen V engine, the valve positions, their angles and the contours of the chamber roof, walls and piston top are all designed to create specific instances of these “three swirls.” The result is more-efficient combustion, which raises torque output, decreases emissions and improves fuel economy. 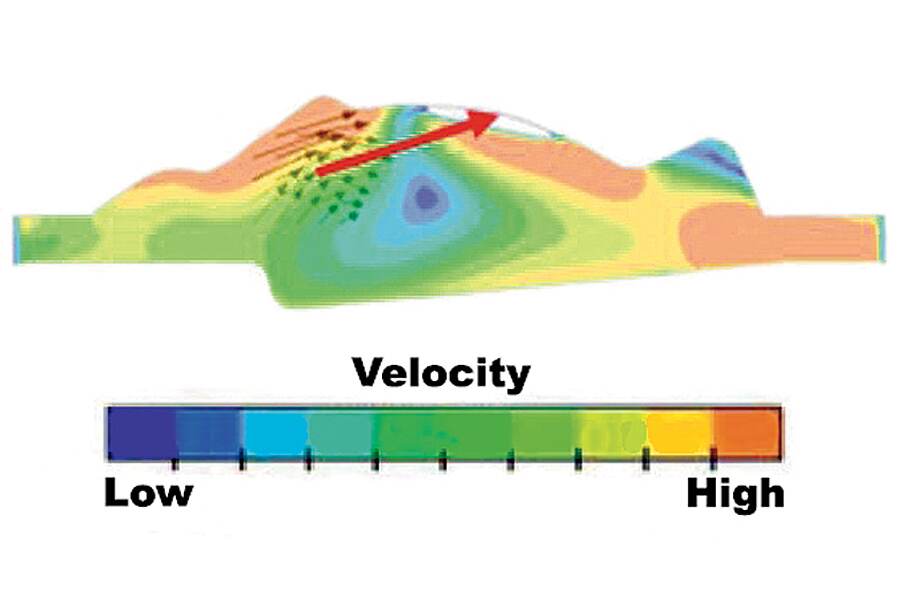 With direct-injection engines, managing oil vapor in the positive crankcase-ventilation (PCV) system is vital. Otherwise, they can combine with heat to create coke deposits on the backside of intake valves. These deposits were less common in port-injected Corvette engines because the detergents in the gasoline droplets flowing past the valves eliminated (or at least mitigated) them.

The Internet abounds with anecdotal accounts of Audi, BMW, Ford and Volkswagen DI engines still under warranty having deposits severe enough to require disassembly for an intake-valve cleaning. In other cases, the induction system was removed and crushed walnut shells blasted down the intake ports onto the valves to remove the buildup.

Reports of intake-valve deposits in GM’s DI V-8s are less common, thanks in part to a redesigned PCV system. This redesign also significantly improved oil/air separation when flow in the system reverses during wide-open-throttle, high-rpm use. 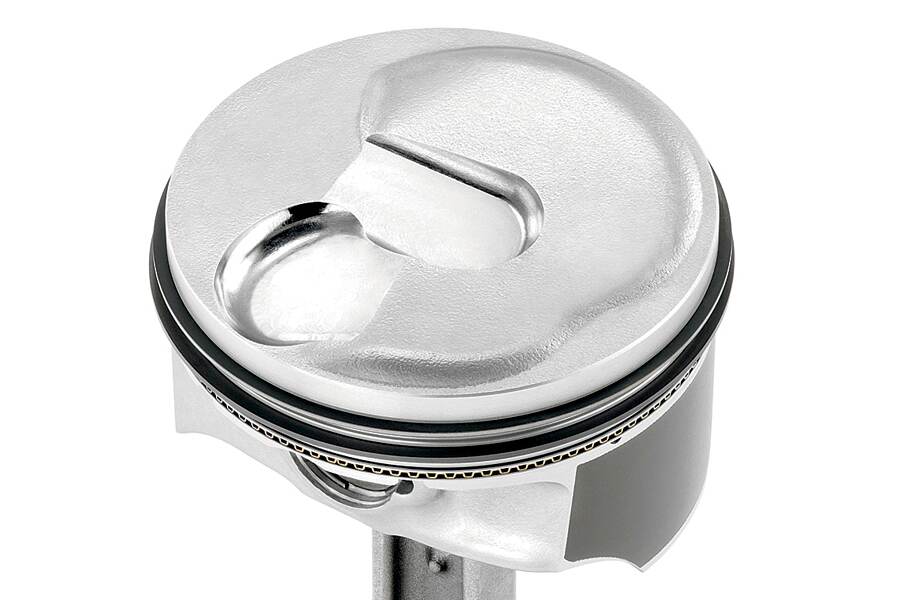 This PCV redo resulted in the engine’s distinctive “quad-dome” rocker covers. The covers are split into two cavities, upper and lower, separated by a divider plate. Some of the domes contain baffles that separate oil from crankcase gases. The oil drops out of the domes, through return holes on the rear of the divider plate and back into the engine. The lower part of the inside of each cover contains oil turbulence, or “windage,” created by the violent motion of the rocker arms. On Z06s and Stingrays with dry-sump LT1s, the engine-oil tank is connected to the domed covers, which process oil vapor from the tank.

But the domed covers are only the first part of the system. The second portion comprises a baffled oil-air separator on the underside of the “valve-lifter oil manifold” that serves as the engine’s valley cover. Finally, a new, variable-flow PCV valve ensures consistent flow through the system.

Once oil is separated by these components, the remaining gases and moisture flow into the intake manifold and are consumed by the engine. During conditions where PCV flow reverses, gases and moisture are expelled just ahead of the throttle body, then consumed. This revised crankcase-ventilation system has about three times the oil-separation capability of the C6-era Gen IV V-8s. It enhances oil life, decreases oil consumption, reduces intake valve deposits and lowers exhaust emissions. 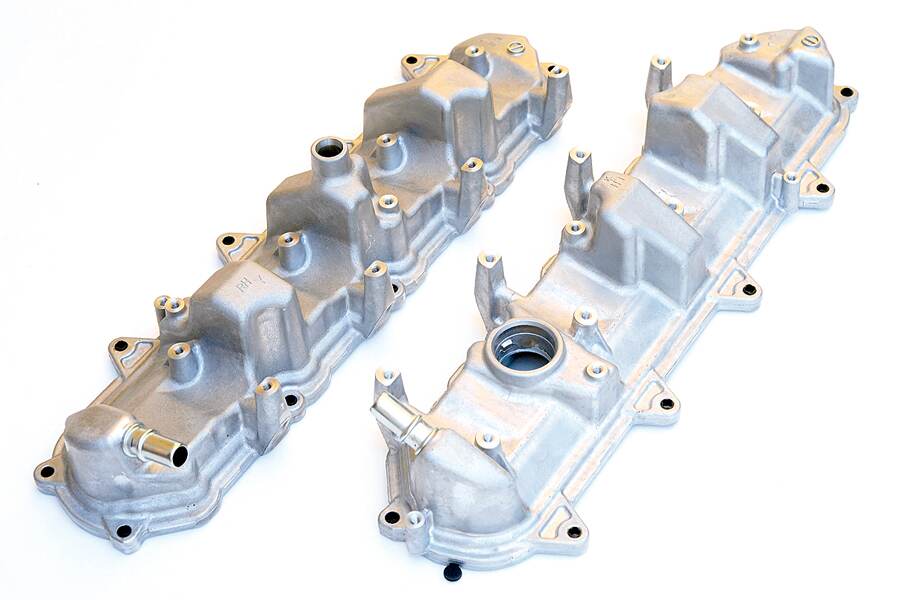 There is more to GM’s deposit-mitigation strategy than oil separators. A recent service bulletin instructs dealers to advise customers to use “Top Tier” gasolines, which use high levels of detergent additives, to minimize problems. It’s all part of a comprehensive approach intended to eliminate problems before they start.

As GM spokesperson Tom Read puts it, “Intake-valve deposits are an industry-wide concern. GM has proprietary design models and methodologies to minimize these concerns. We do make extensive use of late intake-valve closing, which leads to some ‘pushback’ of the air/fuel mixture into the intake port.”

The obvious question, then, is, How much of that pushback is there, and can it be a problem over the long term? At this point, we don’t know the answer because DI Corvette engines haven’t been in the field long enough to furnish a sufficient data set. Nevertheless, we expect LT1s and LT4s to manifest fewer issues with intake-valve deposits than have other DI engines. 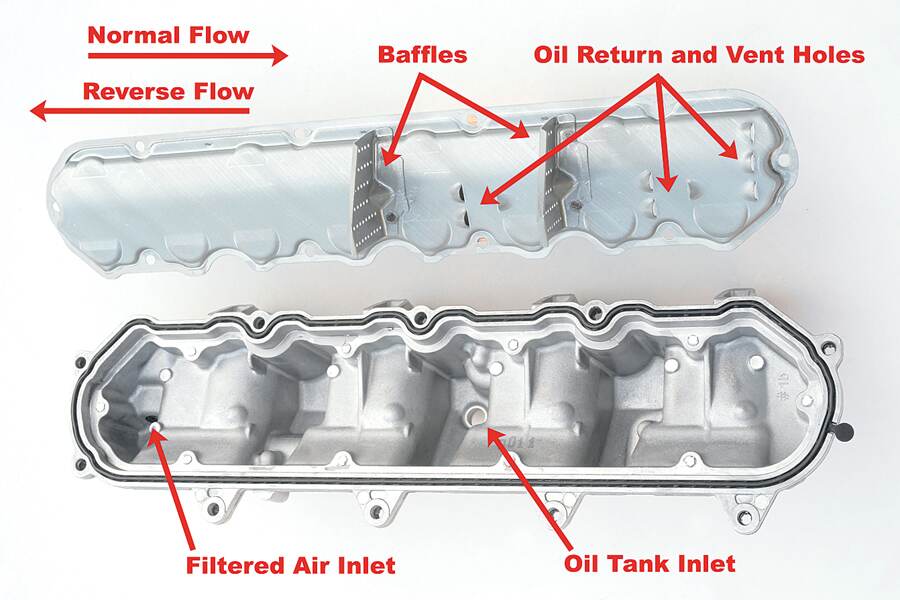 Our deposit-mitigating service suggestions? Always use Top Tier gasoline, and every 5,000 miles or so, add a detergent-based, pour-in injector cleaner like Chevron Techron. If Top Tier gas is not available on a consistent basis, use the Techron more often, perhaps every third or fourth fill-up. (For more information on Top Tier fuels and their availability, visit www.toptiergas.com.)

The type of engine oil used in a direct-injected engine also has an effect on intake-valve deposits. Accordingly, be sure to use an oil that meets GM’s current Dexos standard. There are a number of them on the market, including GM’s semi-synthetic Dexos 1, and they are widely available.

If you want to go “above and beyond” on fighting intake-valve deposits, you need an engine oil with the lowest NOACK rating you can find. The NOACK test is a measure of an engine oil’s volatility. The lower the NOACK, the less likely it is that the oil will coke and form deposits.

With that in mind, consider a full-synthetic oil that exceeds Dexos requirements. An example is Driven Racing Oil’s LS30, which has a lower NOACK number than Dexos mandates and is the only premium, full-synthetic oil formulated specifically for GM Gen III, IV and V V-8s with cylinder deactivation and cam phasing. Obviously, a premium synthetic costs more than many Dexos-approved products. But for those who demand the highest levels of protection for their Corvettes, that premium could be money well spent. 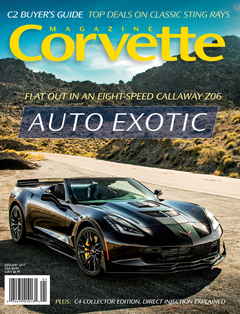