With its eye-opening performance and extravagant options menu, Team Corvette’s latest grand affair may be the best C7 yet 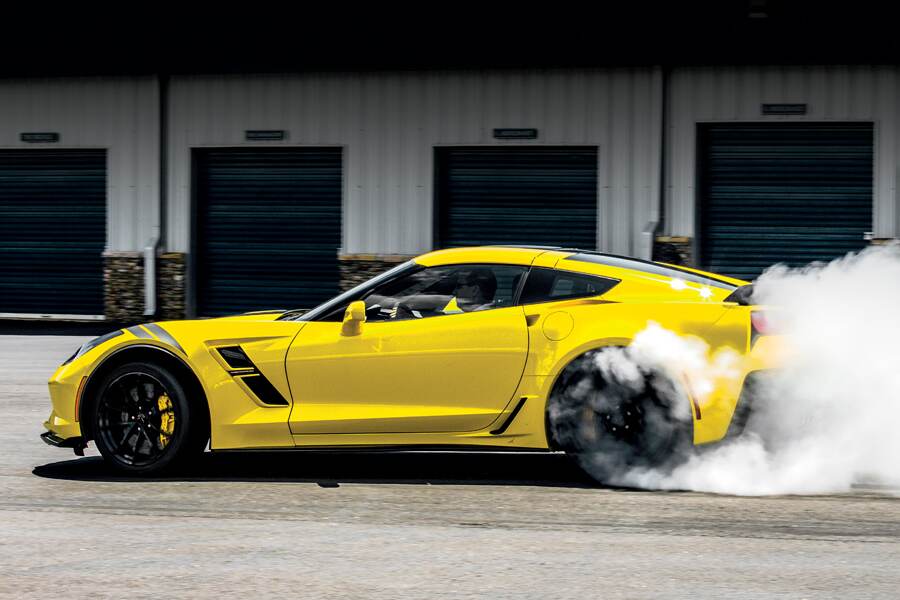 Resurrecting a storied appellation from a brand’s past can be a fraught exercise, especially when the new item bears little resemblance to its legendary namesake. But while GM has a bit of a checkered past in this regard—2000 Impala anyone?—Team Corvette has, to date, managed to steer clear of any such cognomen-based ignominy.

And so it is with the Grand Sport designation, last seen on the final-year sixth-generation model and recently exhumed for use on the 2017 C7. For while certain configurations of the latest GS may suffer from a bit of an identity crisis (more on that in a bit), overall the car is fundamentally in keeping with the spirit of Zora Duntov’s original article. 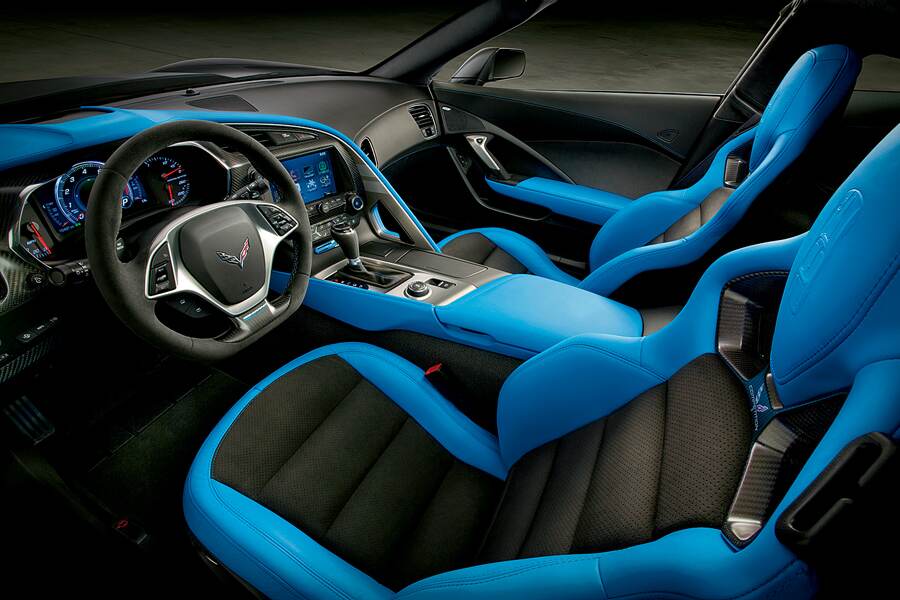 To grasp what Team Corvette has wrought in the 2017 Grand Sport, it’s important to first understand what the car isn’t. Although a vocal minority of marque enthusiasts (including this author) have long pined for a bare-bones, speed-first C7 with a price tag to match, the latest GS cleaves to its immediate predecessor’s formula of ladling extra helpings of performance atop the existing, amply equipped base offering. The result, naturally, is a more expensive car—$65,450 for the coupe and $69,450 for the convertible, up from $55,450/$59,450 for the standard Stingray.

And those are just the base prices. Corvette brand managers’ penchant for offering near limitless personalization options has finally boiled over on the new Grand Sport, to the point that attempting to account for every possible equipment combination is a pursuit best undertaken with the assistance of quantum-computing technology.

At first glance, all Grand Sports (RPO Z16) are easily distinguishable from the base model thanks to the addition of a Z06-style satin-black grille; an enlarged, body-color quarter ducts; side rocker panels; wider rear fenders and model-specific badging. The makeover is rather less comprehensive on the inside, where a lone center-console badge is charged with broadcasting the GS’s specialness to the occupants. But not to worry: If recent history is any guide, lightly optioned examples are sure to make up a but a tiny fraction of the overall production total, and it’s here that things start to get interesting. 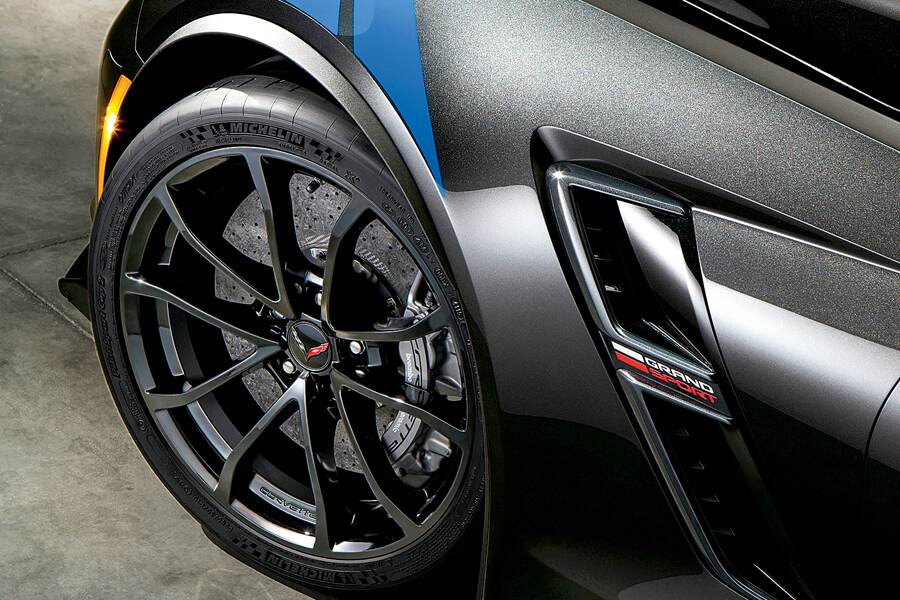 As was the case with the C6 edition, most new Grand Sports are likely to be equipped with the optional (RPO Z15) Heritage Package, which applies the model’s signature hash marks to the fenders and interior aluminum trim. A set of logo floor mats is also included, and a body-length center stripe is available for an additional fee. The hashes are now offered in Torch Red, Shark Gray, Carbon Flash, Yellow, Hyper Green or Volcano Orange, while the center stripe can be had in Arctic White, Shark Gray, Laguna Blue, Torch Red or Carbon Flash.

In a nifty bit of product repurposing, the terrific-looking Cup wheels employed on certain late-run C6 models have been dusted off and pressed into service as the standard Grand Sport rim. Once again personalization is the order the day, with finish choices for the 19x 10- and 20×12-inch rims (front/rear) including Machined (standard), Pearl Nickel, Black, Satin Black with Red Stripe and Chrome.

At the top of the Grand Sport line—in terms of appearance, anyway—dwells the RPO Z25 Collector Edition, which should be on sale by the time you read this. Starting with the high-luxe 3LT package as a base (other GS models may be configured in 1LT, 2LT or 3LT form), the Collector car receives a Watkins Glen Gray finish with Tension Blue hash marks and a Black center stripe. The cabin is decked out in color-keyed leather and suede, including a suede, diamond-quilted headliner that’s optionally available on all ’17 Corvettes. The seat headrests feature an embossed representation of the original Grand Sport racer, and the center console receives a plaque bearing the car’s unique-sequence VIN. 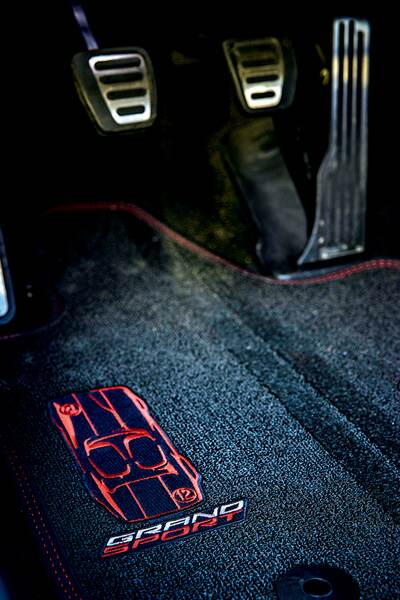 Confused yet? Join the club. Fortunately none of this should matter from the vantage point where the Grand Sport’s unique charms are best enjoyed: behind the wheel.

So far, we’ve focused on what makes the new Grand Sport visibly different than its Stingray siblings. But the GS designation has always carried with it the expectation of enhanced performance, and in this area the 2017 edition does not disappoint. In fact, it is now possible to outfit one of these midlevel Corvettes with much of the same performance gear as the line-topping model, something that could not be said of the sixth-generation car. 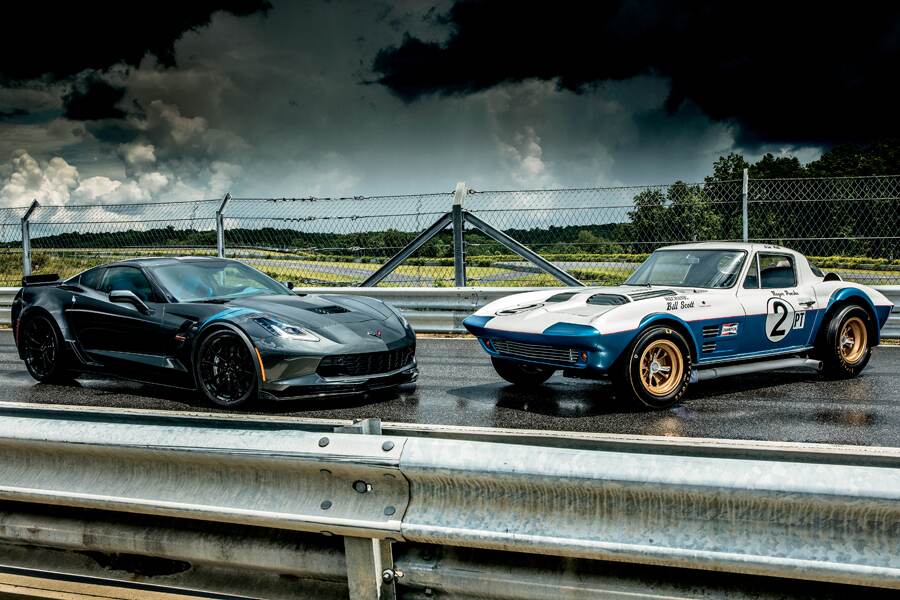 Before we get to that, let’s take a look at the hardware that constitutes the basic Grand Sport package, starting from the ground up. Michelin Pilot Super Sport tires in larger sizes—285/30-19 in the front and 335/25-20 in the rear—furnish the grip, while Z06-derived Brembo brakes—14.6-inch front rotors with six-piston calipers and 14.4-inch rears with four-pot calipers—supply the grab. Z06-style functional air ducts help cool the binders under heavy use.

But perhaps the biggest news involves the availability of the Z07 Performance Package from the Z06, encompassing carbon-ceramic brakes (measuring 15.5 and 15.3 inches front and rear, respectively) and Michelin Pilot Sport Cup 2 “summer” tires. Ticking the CFZ and CFV option boxes adds a more aggressive rear spoiler, though minus the clear center panel and taller end caps from the Z06/Z07 item. As Chief Engineer Tadge Juechter puts it, “We didn’t hold back.” 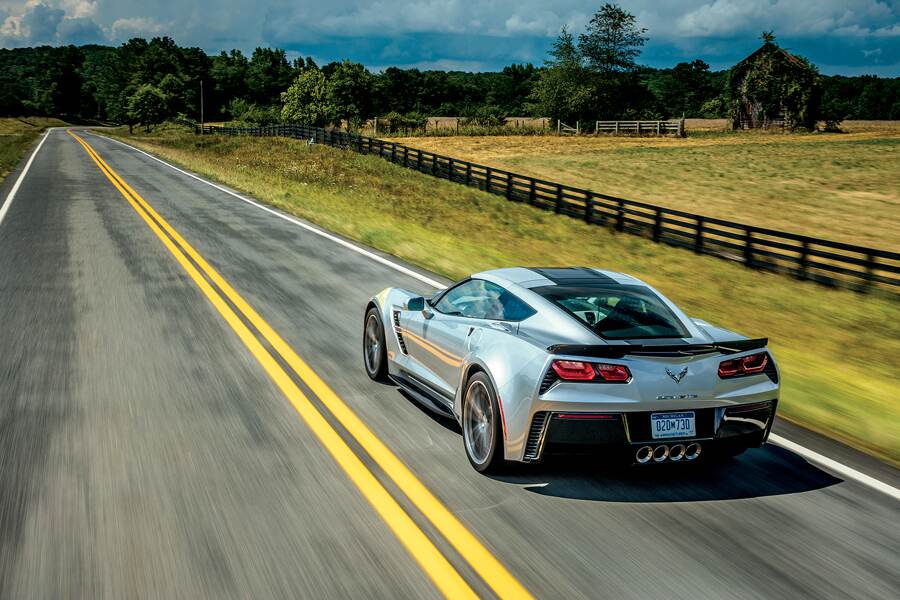 Maybe not, but a bit more juice from the 460-hp LT1 engine would not have been an unwelcome addition, especially given the Grand Sport’s stated role as a track-capable machine to bridge the gap between the civil Stingray and the hardcore Z06. Certainly it would have been a simple matter for GM’s powertrain engineers to extract another 20 or 30 horses from the conservatively tuned mill, a modification that would have made an already electrifying car even more so.

The Grand Sport press material also makes much of the car’s “lightweight architecture,” but this is purely an exercise in salesmanship: The GS uses the same aluminum frame as any other C7, which, although technologically advanced and fantastically rigid, isn’t exactly new at this point. In fact, the GS is 25 pounds heavier than a Stingray, thanks to the added weight of the aero-enhancing gear (though it’s still nearly 100 pounds lighter than the supercharged Z06).

No matter. Chevy claims the ’17 Grand Sport is the quickest of the non-Z06 Corvettes, both in a straight line and through the twisty bits, and that a Z07-equipped model will lap GM’s Milford Proving Ground circuit within one second of the old 638-hp C6 ZR1. Acceleration benefits primarily, if not exclusively, from the Z07’s competition-grade rubber: 60 mph in the automatic arrives in just 3.6 seconds, while the quarter-mile mark falls in 11.8 seconds. The Z51 is just behind at 3.7/12.0, while the base Stingray manages 4.0/12.2. Those super-sticky Michelin PS2s are also responsible for the Z07’s extraordinary lateral grip: 1.2g, as opposed to 1.05g for the base GS, 1.03g for the Z51 and an even 1.0 for the ‘ray.

These assertions appeared to be borne out during a press event at Atlanta Motorsports Park, where a Z07-optioned self-shifter repeatedly pegged the PDR’s g-meter at 1.25 and touched a lofty 130 mph on the main straightaway. Chevy doesn’t list a top speed for the Grand Sport, but expect it to be somewhat lower than the Stingray’s, thanks to the downforce-inducing properties of all those spats and spoilers.

So is the new Grand Sport a “purist” model, as Chevy insists? We’re inclined to say no, not least because of the high standard-equipment level and premium pricing. But that’s more an error in marketing strategy than a deficiency on the part of the car. Until a true C7 “stripper” appears (and we have no reason to believe it ever will), the Grand Sport should be appreciated and enjoyed for it is—a versatile and supremely capable performer, and a worthy addition to a storied line of Corvette models. 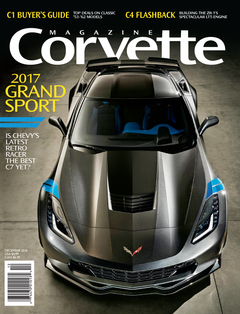