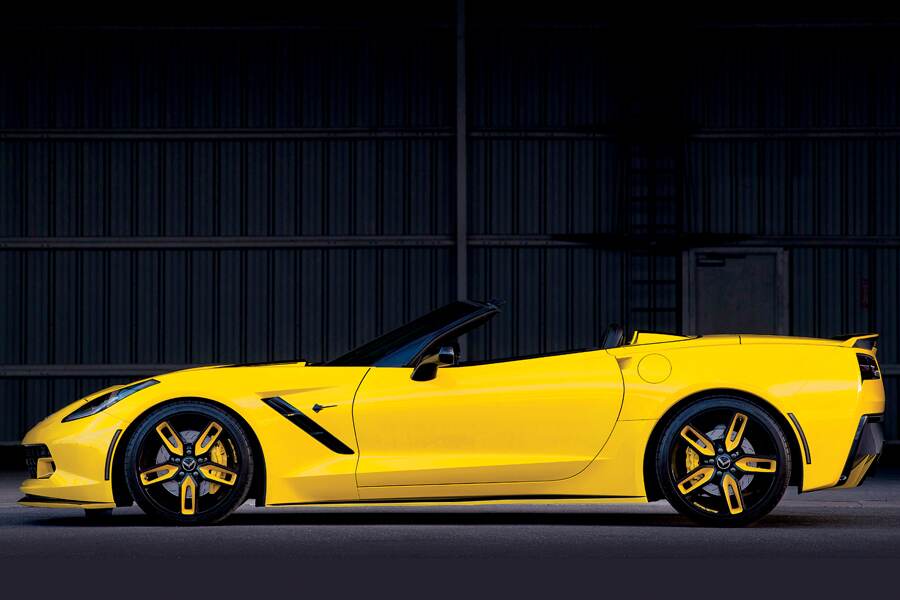 We admit it. As part of our effort to bring you the rarest, fastest, most technologically innovative Corvettes from around the U.S. and beyond, we occasionally fall victim to the allure of “checkbook cars.” So dubbed for the laissez-faire manner in which they’re created, these high-dollar projects reflect the efforts (and sometimes even the creative visions) of the professional restorers and modifiers who execute them, rather than the owners who underwrite them. Though not demonstrably harmful to the hobby at large, the trend can be off-putting to those Corvette enthusiasts who enjoy a more hands-on relationship with their favorite sports car.

As atonement for past sins, we present Carlos Brito’s 2014 Stingray convertible, a bravura display of DIY derring-do capable of holding its own among even the most meticulously crafted pro-built showpieces. Factor in that the car is not just driven, but driven daily, and the result is one of the more extraordinary Corvette/owner pairings we’ve encountered in some time.

To understand how such a car came to be, it helps to know a little about its owner/builder, and in Brito’s case, the back story is revealing indeed. At the age of 15 he talked his brother into cosigning for a motorcycle, a purchase that ignited a passion for speedy two-wheelers—and, later, performance cars—stretching through adolescence and into early adulthood. 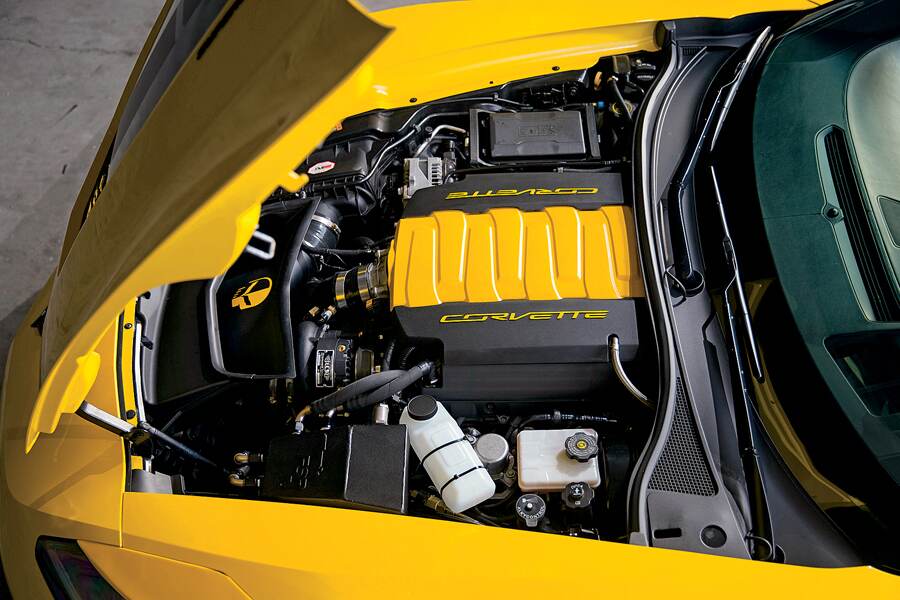 All the while, Brito was building a rewarding professional life, serving an 11-year stint in the Army before taking a job in the security sector as a civilian Defense Department employee. Along the way, he ran a mixed-martial-arts gym, and today he teaches hand-to-hand combat and firearms in his current hometown of Tampa, Florida.

“Needless to say, I have always been a bit of an adrenaline junkie—in love with fast cars, motorcycles and truly anything that is high-speed, -impact or –risk,” Brito admits. Naturally that affinity for all things ballistic was not lost on Brito’s wife, who in 1998 made an innocent suggestion that would turn out to have and drastic and permanent consequences.

“Knowing how much I loved cars, [she] told me that there was a car show around the corner, and that we should go check it out,” Brito recalls. “It happened to be a Corvette show. They had dozens of Vettes from all five generations, [each] one more awesome than the next.” 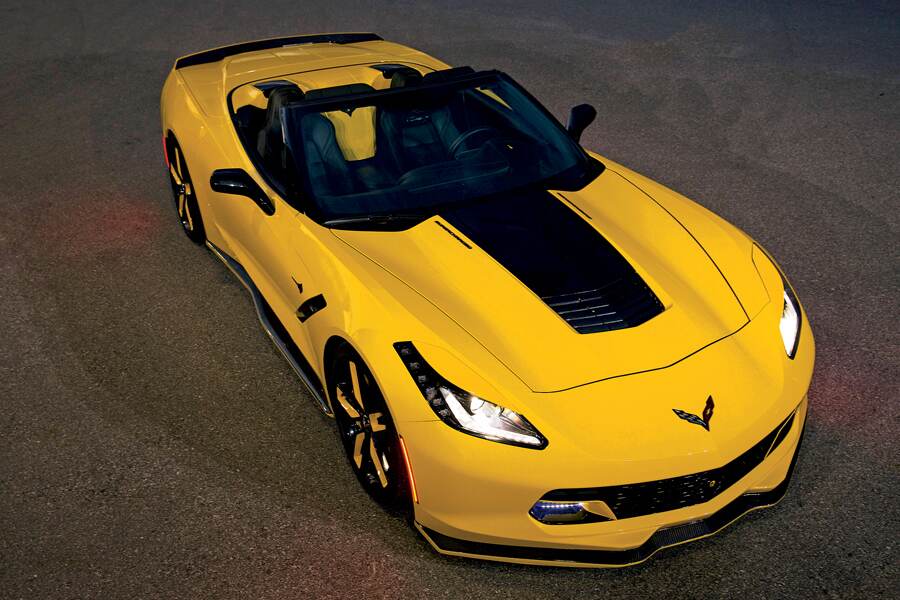 Up until then Brito had been perfectly content with his brand-new ’98 Pontiac Firebird and Kawasaki ZX7 sport bike, but the sight of all those “awesome” Corvettes inflamed a new desire that would prove impossible to extinguish. “I traded in my car and my motorcycle and purchased my first Corvette—without letting my wife know I was even thinking of it. To this day, she calls it ‘the day she almost left me,’” Brito says with a laugh.

But Mrs. Brito remained, and likely experienced no small amount of schadenfreude when, just two years later, it became clear to her husband that his beloved Dark Red C4 convertible was, in his words, “less than perfect for a starting family.” The C4 found a new home, and in the years that followed Brito did his best to keep himself entertained with a series of Mustangs and SUVs. It wasn’t until 2008 that the couple decided—mutually, this time—that it might be time to add another two-seater to the family fleet.

“I’m not sure how that conversation ended, because I was instantly out the door and [on the way to] our local Chevy dealer,” Brito says. Although he originally planned to target a yellow convertible, he ended up taking home a new Crystal Red Z51 topless car instead. His passion for the marque rekindled, Brito drove, modified and enjoyed the C6 for the next several years until the all-new C7 hit dealerships in late 2013. But while the long-suffering Mrs. Brito was not against a Stingray purchase in principle, she did have one very reasonable stipulation. 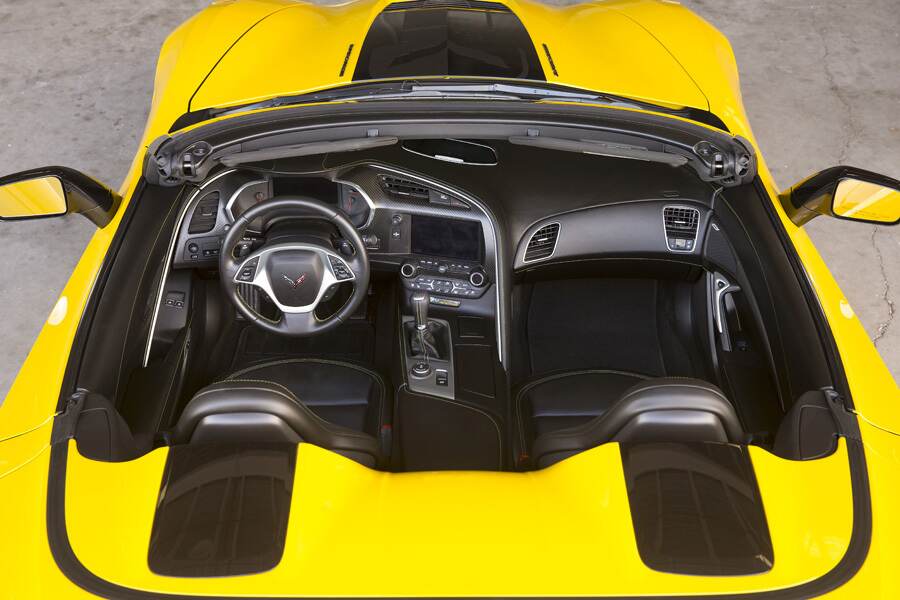 “My wife considers [modifications] a waste of money,” Brito explains. “So, when the C7 came out and I started itching for an upgrade, she was hesitant to give her seal of approval. As she put it, ‘We finally have our payments and budget where we want them, and you’re going to buy this car and start dropping even more money buying parts for it.’”

To assuage her, Brito made what he calls his “Husband Promise”: “I promised to special-order my car with everything I wanted on it. It would be the perfect Corvette, with no additional modifications needed—the ultimate dream car.” Domestic tranquility thus secured, Brito began to conduct thA ported throttle body and e research required to ensure that he not only got the Corvette he wanted, but the deal he wanted as well. But while it didn’t take him long to determine what he considered a fair price, locating a dealership willing to sell a C7 for that sum proved another matter altogether.

“One night, I came across a forum post that gave instructions on how to get Supplier Pricing though the GM Credit Union Program,” Brito explains. “I definitely qualified, and I received my certificate from GM. However, there’s always fine print.” In this case, the microscopic text at the bottom of the voucher noted that individual dealerships were under no obligation to participate in the discount program. It’s hardly surprising, then, that a subsequent series of phone calls and showroom visits turned up precisely zero dealerships willing to sell Brito the Velocity Yellow Stingray convertible he desired through the Supplier Program. 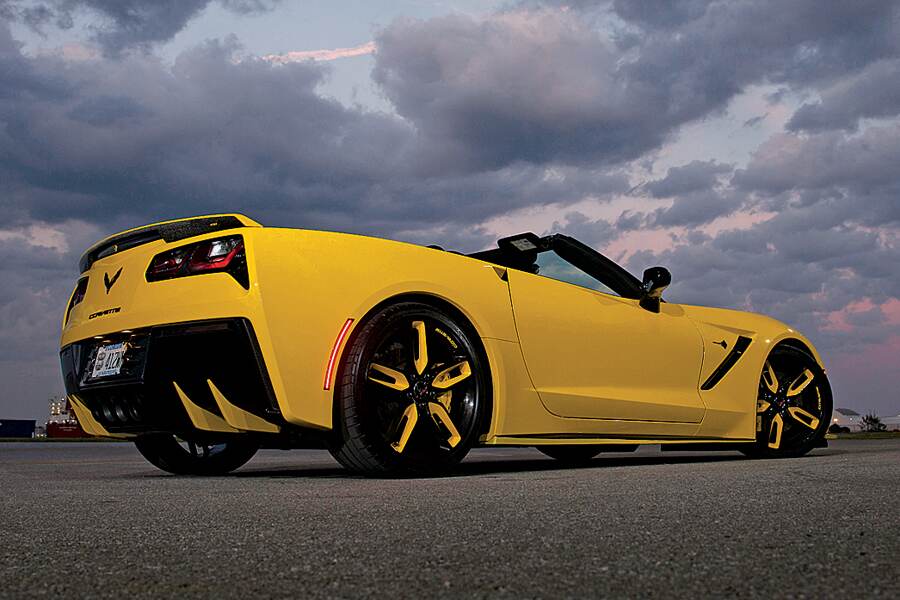 Undeterred, Brito decided to take a different approach, firing off a salvo of purchase-offer e-mails to every Chevrolet dealer he could locate within a 100-mile radius of Tampa. The tactic paid off…eventually. “Ninety percent of the responses were still quoting MSRP, 7 percent offered to discount the car by $500 to $1,000 and 2 percent just wasted my time by making me come in, offering me a $1,000 discount and then low-balling me on the trade-in,” he says. “Just when I was ready to give up, Stingray Chevrolet in Plant City called and said I [could] order my car and receive Supplier Pricing.”

And so he did, acquiring the yellow Corvette he’d been longing for since at least 2008. An initial round of no-cost “personalization” followed, in which the car lost all of its chrome bright work to take on a Corvette Racing–inspired yellow-and-black mien. But while Brito did his best to adhere to the “Husband Promise” he’d made months earlier, it wasn’t long before the self-described adrenaline junkie began eyeing more-substantive upgrades.

“One mod I’d always wanted was a supercharger, but I feared that it would dramatically shorten the life of my engine,” Brito says. “I finally contacted my cousin, Julio Don, owner of [methanol-injection-systems manufacturer] AlkyControl. After a short conversation and [having obtained] a better understanding, I took the plunge.” 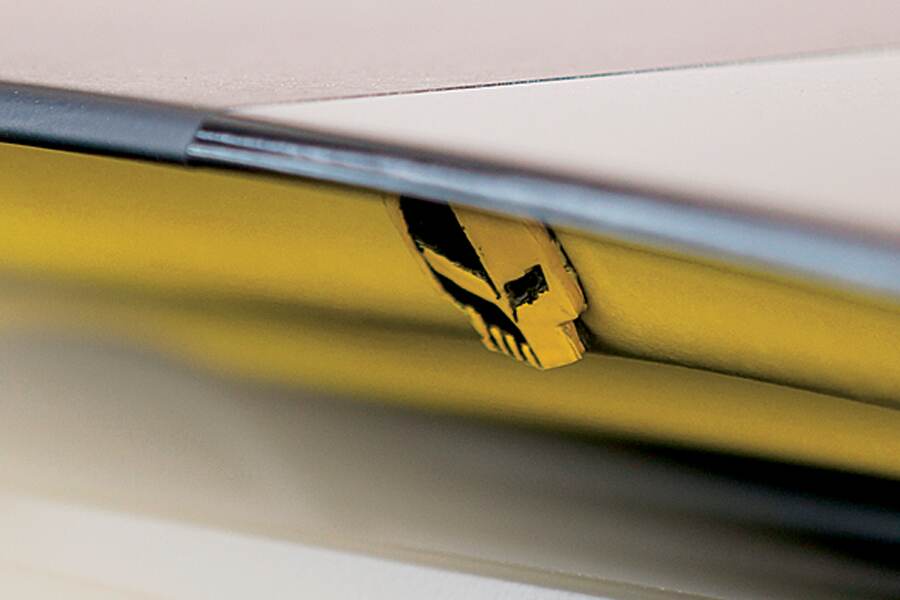 With the methanol system installed as a safety- and power-enhancing measure, all that remained was to add the supercharger that necessitated it. Based on “months of research on the Internet and seeing a lot of positive feedback,” along with Don’s recommendation, Brito finally settled on a centrifugal setup from East Coast Supercharging (ECS) in New Jersey. Florida Speed and Power handled the rather involved installation, after which testing on a pair of chassis dynamometers showed rear-wheel output figures ranging from 678/587 to 703/592 (horsepower/torque), depending on weather conditions and the specific dyno used for the pull. Even better, Brito reports that the ECS SC1500 system’s bottom-fed intercooler helps keep things cool even during track days (more on that momentarily) held in Florida’s oppressive summer heat.

But as impressive as the Stingray’s performance is, it’s the car’s appearance that typically generates the most attention out on the street. In keeping with Brito’s hands-on approach to the hobby, he performed as much of the work as possible himself, though sometimes with the help of family members. “I ordered [the grille] through GM and airbrushed the air ducts myself, the same as I did on the plenum cover,” he notes. “The tailpipes were blacked out with Plasti Dip, and taillights shaded by hand as well. These have held up very well, going on 18 months.”

One of the car’s cleverer “free” mods can be found on the factory Z51 wheels, to whose original black finish Brito added yellow accents on the interior of the spokes. The body-color highlights make the rims virtually indistinguishable from pricy aftermarket rollers at first glance, all for the cost of a few cans of yellow paint and a few hours’ work with his older brother. 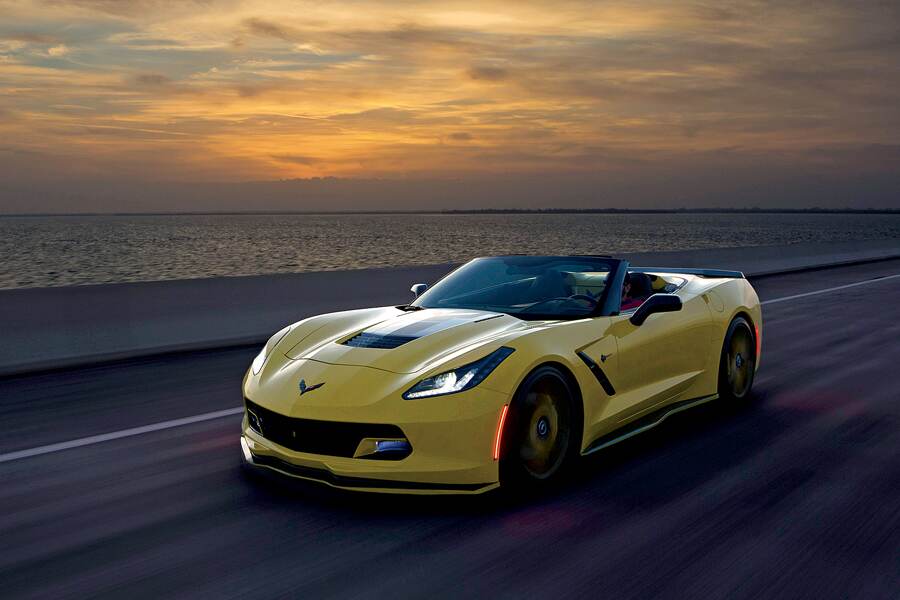 Brito did get some professional assistance on the vinyl Z51 lettering, “Jake” hood skull and headlamp eyelids, which were installed by Redline Design in Tampa. The carbon skirts, splitter and spoiler, meanwhile, are courtesy of Alan Eosso at G3 Carbon. (Brito notes that Eosso is currently working on a set of Stingray fender flares, having used his convertible to create the mold.)

No such help was required in the cabin, where Brito extended the C7.R theme by painting the seat emblems and Stingray dash emblems yellow, then adding yellow stitching and a Corvette Racing badge to finish off what is one of the most comprehensively, and perhaps obsessively, worked-over C7s we’ve ever encountered. But while this head-turner can and does make a statement on the showground, Brito uses it both regularly and vigorously for its intended purpose: going really, really, really fast.

“I have been to the wannaGOFAST half-mile [acceleration] events, where the car pulled a constant 153 mph,” says Brito. “I am eager to try it again with the smaller pulley that’s on the supercharger now and see what gains I’ve made. I’ve also taken the car to Palm Beach International Raceway and recorded a best personal lap of 1:26 with a backstretch speed of 155 mph. The quarter-mile drag strip is also on the to-do list.” 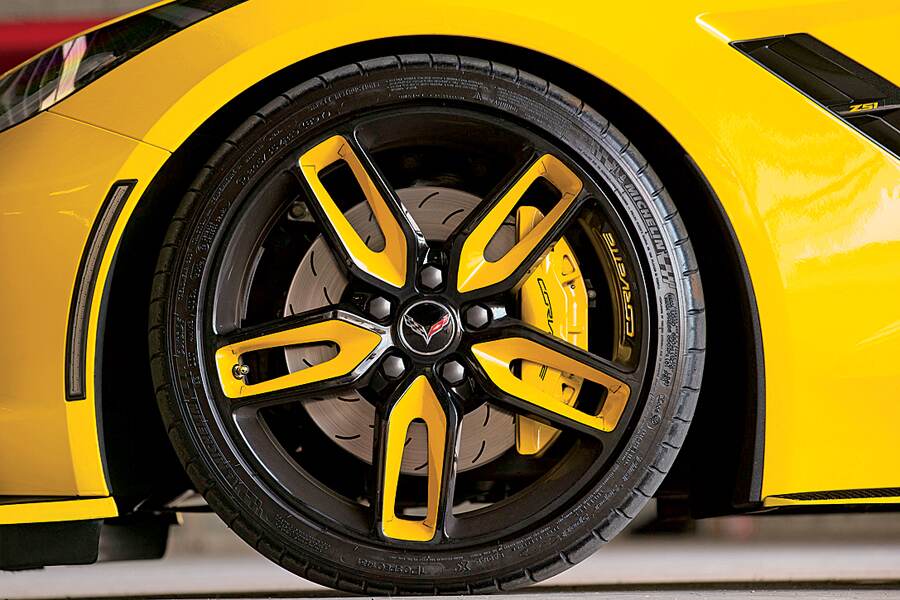 In a telling bit of anthropomorphism, Brito has dubbed the C7 “Yvette” (for “Yellow Vette”), an appellation he occasionally deploys when discussing the car. “Yvette is my daily driver,” he says, “but I don’t see cars as tools that get you from point A to point B. I think [they] are more of an extension of ourselves.

“Regardless of how hard or bad my day was, the minute I get in my car and start driving, my mood completely changes. It’s my mode of transportation and my therapeutic release. If your car doesn’t alter your mood, then you’re in the wrong vehicle.” 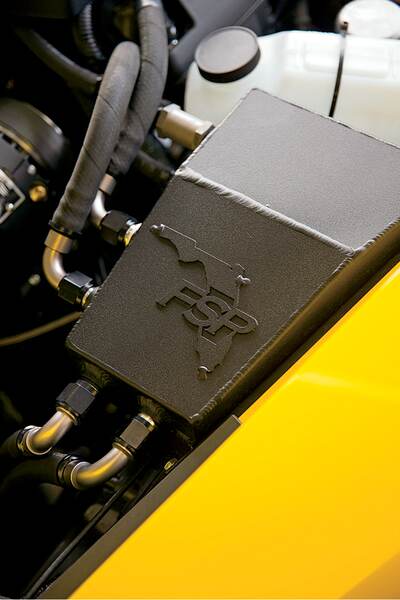 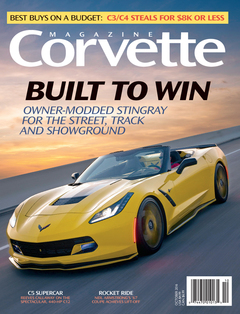