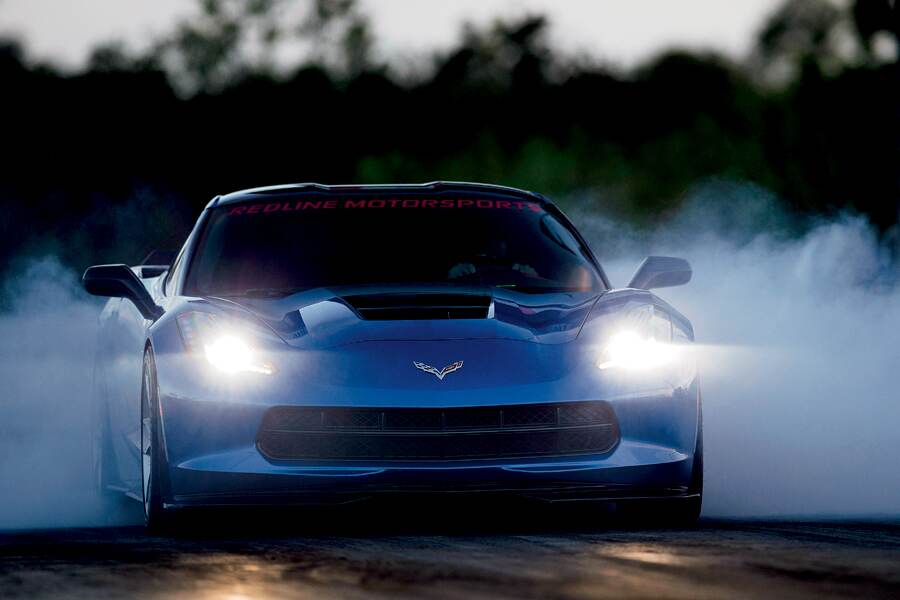 For a reliable indicator of the general state of the Corvette hobby, one could do worse than to look to the aftermarket. Consider the 1970s, when a vitiating mix of regulatory constraints and changing buyer preferences reduced onetime performance peddlers to hawking everything from seemingly Mad Max–inspired fender flares to full-on limousine conversion kits. The worst of these cars represented the brand’s fat-Elvis-in-Vegas moment: garish, lamentable and often unintentionally hilarious.

Thanks to the introduction of the revolutionary “Gen III” engine architecture in 1997, the world of modified Corvettes took a decisive turn toward respectability during the C5 era. A cottage industry of speed-parts vendors quickly sprung up around the thoroughly tweakable LS1, and leading tuners began vying to one-up each other with ever more remarkable feats of acceleration and output. By the time the C6 era came to an end in 2013, 1,000-horsepower Vettes were prowling the streets from Dallas to Dubai.

As the owner of Redline Motorsports in Pompano Beach, Florida, Howard Tanner understands the value of staying at the very forefront of the rapidly evolving Corvette-performance scene. It’s not surprising, then, that he was among the very first customers to take delivery of a 2014 Stingray when the new model went on sale in late 2013.

“We were excited about the new ‘Gen V’ [LT1] small-block, and anxious to get our hands inside the new E92 processor that was controlling…the direct-injection technology,” Tanner says. “The car was ordered very early, and with a little help from inside the GM corporate machine, we received car number 95 on November 3.” 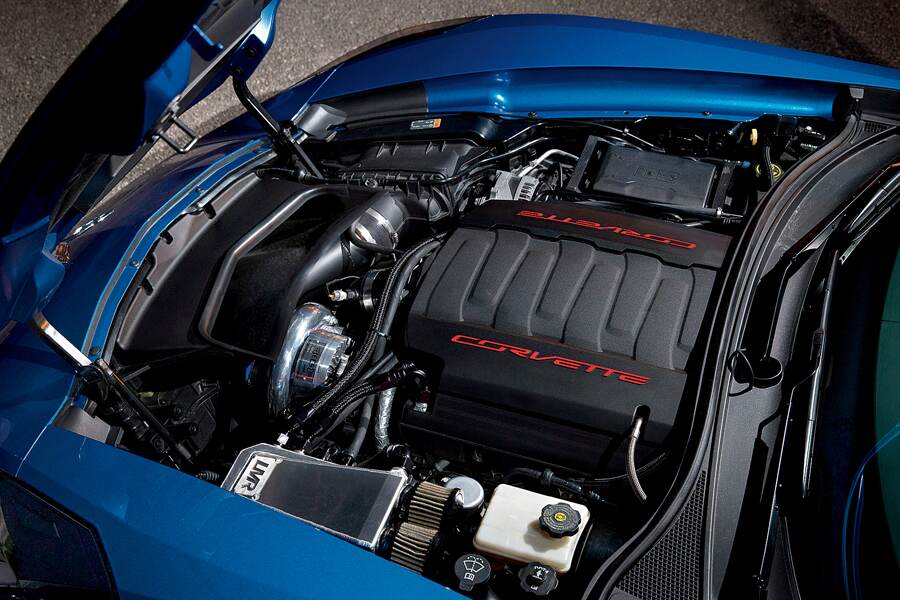 Getting a jump on the competition was especially important with the C7, given the comprehensive nature of its redesign. Unlike the C6, which shared its basic chassis and engine layouts with its immediate predecessor, the seventh-generation car retained just two inconsequential bits from the former model. As such, it was effectively a “clean slate” for aftermarket tuners, the most industrious of whom recognized an opportunity to be first to market with popular power-boosting parts like headers, cold-air induction packages and even internal engine components.

Perhaps more important, the Stingray furnished shops like Redline with a prime opportunity to log the kind of performance “firsts” that generate valuable buzz in the Corvette community. And since the new car was already capable of high-11-second quarter-mile times in unmodified form, Tanner decided to set his sights on a more ambitious bogey: the 10s. As it turned out, not all of the factory hardware was on board with his plan.

“Upon arrival the car was brought directly to Palm Beach International Raceway to see what GM had whipped up,” Tanner says. “With 65 miles on the clock and plastic still on the seats, we managed to scatter the differential all over the starting line.”

The setback was a potentially ruinous one, as several other members of the Corvette-tuning community were already edging toward the magic 10-second mark themselves. With the clock ticking, and the local Chevy dealer proving unable to produce a fresh diff quickly, Tanner called in a favor—a big one. 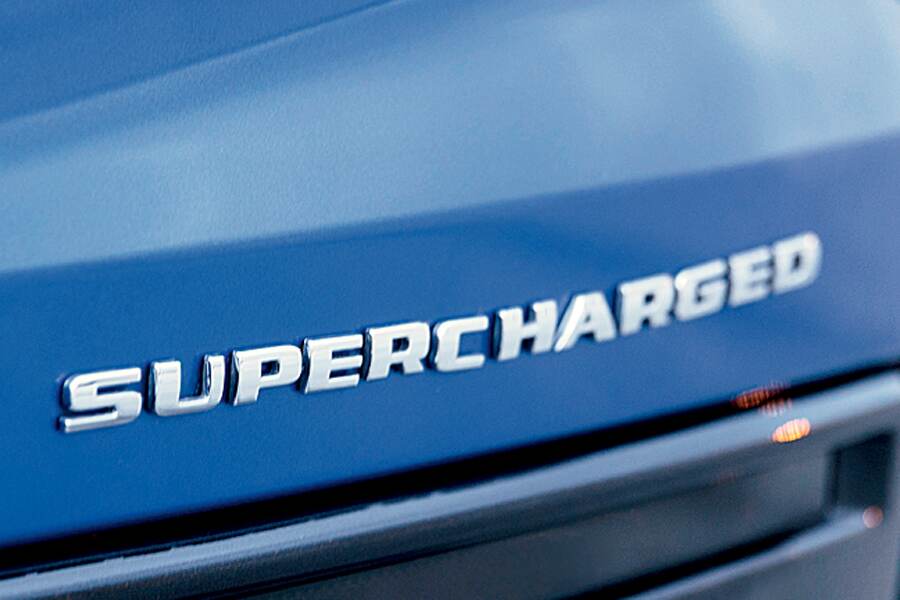 “Fortunately I had a phone number on my cell phone for someone high up on the Corvette ranks,” he recalls. “It [was] Tadge Juechter, chief engineer. I made the call on a Thursday, and…a new diff showed up on Friday morning.”

Although the Redline crew had lost two weeks of valuable development time in the interim, none of their competition had managed to record a 10-second pass during that span (though one had logged a too-close-for-comfort 11.15). With the mark still theirs for the taking, Tanner and company got back to work.

The initial round of modifications included a custom-grind camshaft for the LT1, along with a set of 1-7/8-inch long-tube exhaust headers from American Racing Headers. A conservatively configured nitrous system, meanwhile, tacked on another 125 horses’ worth of chemically induced straight-line squirt. Shod with a pair of gummy 17×10-inch Mickey Thompson ET Street Radials, the car managed an 11.06 during a Friday-night track session at PBIR.

It was an impressive accomplishment, to be sure, though not one that lent itself to the kind of rousing ad copy a 10.99 (or better) pass would have furnished. Worse, PBIR’s dragstrip was closed the following day, leaving the coveted title of First C7 in the 10s open to capture by another Corvette tuner. One in particular—the shop that had just posted that 11.15—seemed poised to break the barrier. 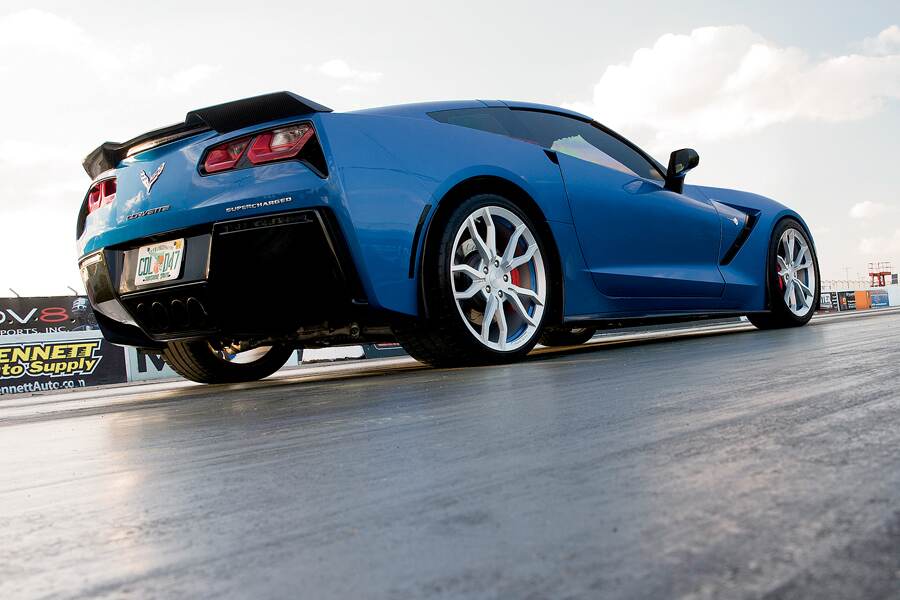 “I happened to have an open relationship with the shop’s owner…so we were pushing each other minute by minute,” he recalls. “All day Saturday I kept checking in to see if they made a pass. It wasn’t until about 10 PM that I finally made contact [and was] informed that they got rained out.”

With the immediate danger averted, all that remained was to orchestrate a rare Sunday test session and sew up the 10-second title for good. Tanner put in another call, this time to PBIR track official Jordan Mara, and explained the urgency of the situation.

“I told him what I was up against, and [asked] if there was any way to let me get on the track the next day. After an hour he called with a green light. It was game on.”

The next morning, on a freshly prepped track surface, Tanner laid down a flawless pass, launching cleanly and nailing every upshift. The car had finally performed to its full potential, but was it enough? 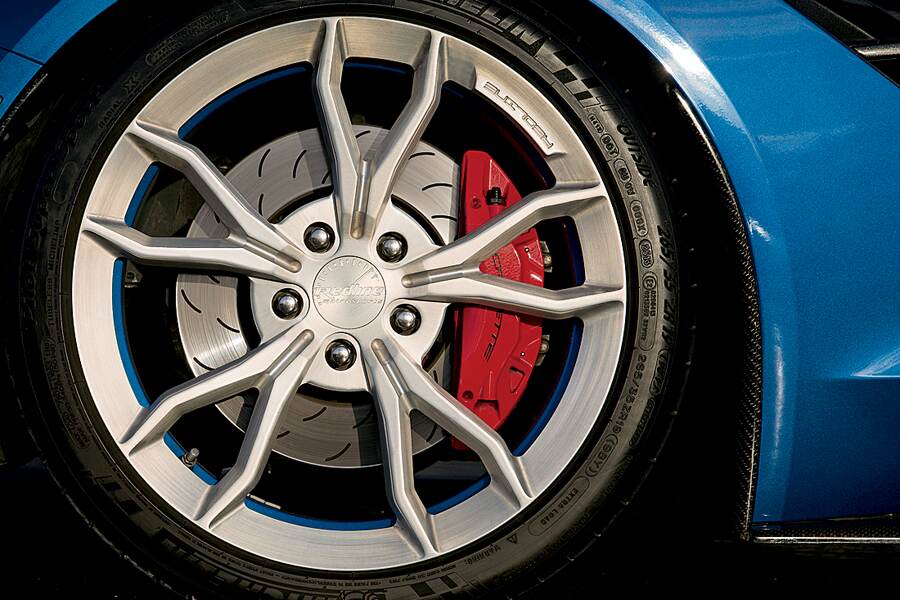 While most C7 owners would have been satisfied to have run mid-10s with a mostly stock car, for Tanner this formidable accomplishment represented but the first step in an ambitious journey into uncharted performance territory. Having set his output bogey of 1,000 street-worthy horsepower, he quickly got back to work.

“At the time we started the project, we were working closely with Wiseco Pistons in developing a unique piston for the direct-injected motor,” relates Tanner. “A set of Callies Ultra rods and a Magnum 4.00-inch-stroke crank finished off the bottom with enough strength to handle the [projected output].”

The end result of all that poking and prodding was a displacement rating of 416 cubic inches, up a cool 40 cubes over the Stingray’s stock LT1, along with a slight drop in compression, from 11.5:1 to 10.5:1. That alone should have been enough to add a goodly sum of power to the tally, but Tanner, whose previous Corvette projects include a turbocharged C6 Z06 that runs 7s in the quarter, was just getting started. 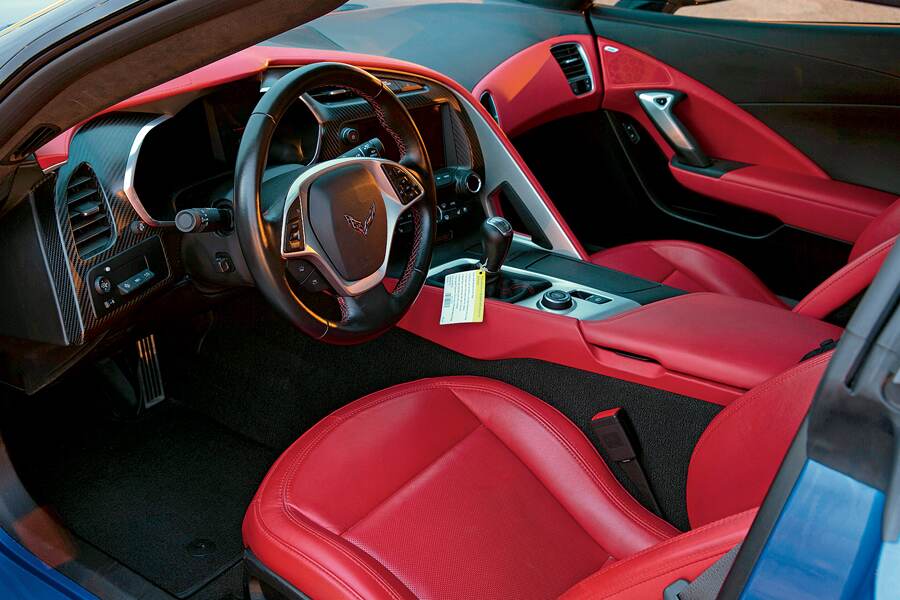 “The cylinder heads were torn down and fitted with better, stainless valves; a set of dual valve springs and a good valve job,” he says. “The camshaft was something I whipped up with the help of Billy Godbold…at Comp Cams.”

As is often the case with performance-improved C7s, the centerpiece of the build a involved forced-induction system, in this instance a centrifugal supercharger setup employing a Novi 2200R head unit and a 10-rib belt drive from New Jersey tuner East Coast Supercharging. But while the blower was capable of supplying all the intake air the stroked LT1 could handle, there was another obstacle to overcome before the car was once again ready to hit the street and strip.

“With enough airflow to make 1,000 horsepower, our biggest problem was fuel,” explains Tanner. “Direct injection at the time did not have [the] capacity to feed the engine enough fuel, so we installed a methanol-injection system from AlkyControl.”

Originally developed for use in military aircraft engines, such systems inject water, methanol or a water/methanol mixture into the incoming fuel/air mixture to lower its temperature and reduce the chances of detonation. The popularity of methanol injection—alternatively known as water injection or alcohol injection, depending on the precise composition of the fluid in question—has increased dramatically in recent years as aftermarket forced-induction systems have become more common. 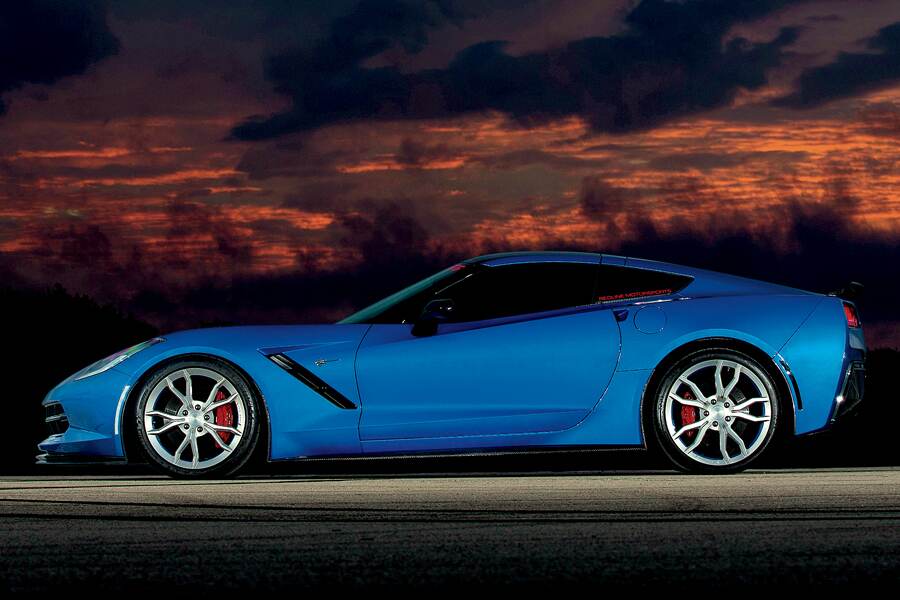 It certainly worked for the Redline C7, which Tanner was able to safely tune for 16 psi of supercharged boost. The result was almost inconceivable 909 rear-wheel hp on the Redline chassis dynamometer, which translates to around 1,070 horses at the flywheel. Although traction is, unsurprisingly, scant, Tanner has found a schadenfreude-inducing way to make use of the car’s towering output.

“[The car] has made plenty of trips to Miami, where…it has eaten some high-dollar exotics on I-95,” he says. As for the Stingray’s real-world usability, Tanner notes that, “It runs great. It’s even been caught in Miami rush-hour traffic many times and never skipped a beat.”

Ever the canny racer, Tanner has kept the car’s exterior modifications to a minimum, the better to dupe any Porsche or Lambo owners still harboring notions of accelerative invulnerability. He designed the spidery 10-spoke rims himself, then had them manufactured by an undisclosed wheel company in California. The carbon splitter, side skirts and wing, meanwhile, came from Xtreme Supercars, a Corvette body-mod specialist based in nearby West Palm Beach.

The low-key approach carries over to the interior, though only to an extent: in an effort to distinguish his early Stingray from the thousands of C7s that would follow, Tanner paid the required GM upcharge to have the Laguna Blue Tintcoat car outfitted with “nonstandard” red leather. The resulting presentation—which instantly puts one in mind of the ’96 Grand Sports—may not be for everyone, but there’s little question that it achieves its intended purpose.

Of course, there’s little chance of anyone confusing the car with a typical C7 from behind the wheel, where the big-inch LT1 and centrifugal supercharger team up to supply immediate and unrelentingly violent acceleration at any speed or rpm level. And although Tanner hasn’t had a chance to drag-test the Stingray since installing the new engine combo, a car of its weight and output should be capable of easy mid-9-second passes given sufficient stick.

Of course, that’s assuming the clutch—and the rear end, and the transmission—can hold together, which are ambitious assumptions indeed. And so, for now, the world’s first 10-second C7 will continue to exert its dominance on the mean streets of South Florida, a prospect that seems perfectly acceptable to its owner.

“The purpose of this car was to get a jump on DI (tuning), and it did,” says Tanner. “The 416 motor was also built during a time when guys had hardly even ordered a car. I’d say it was a pioneer.” 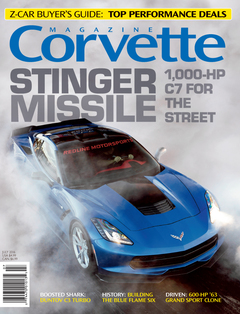