Bill Mehrkens has a knack for Corvette makeovers, one vividly illustrated by his 2014 C7 "Grand Sport." 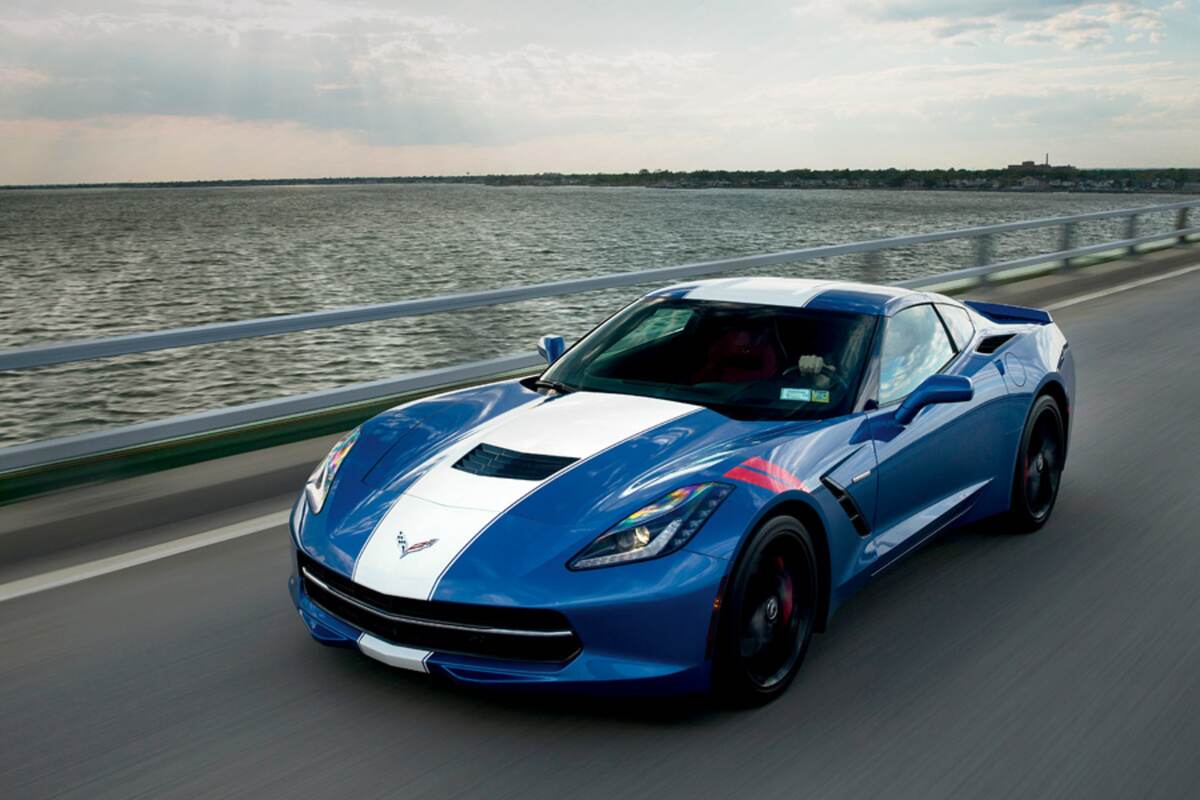 Mining the past for creative inspiration is a popular practice among automakers these days, hardly a surprising development considering that new-car buyers can typically be relied upon to choose nostalgia-drenched rehashes over bold, new styling paradigms. Witness, for instance, the rather improbable success of the fifth-generation Camaro, a portly, ill-proportioned mash-up of faux-retro bodywork and chassis bits cadged from an Australian sedan. And yet, despite these fundamental flaws, Chevy’s reborn pony car continues to sell in volumes rivaling or exceeding that of its traditional nemesis, the lighter, more lithesome Ford Mustang.

Happily, modern (’84-up) Corvettes have managed to evade reassignment to the aesthetic time machine, a fate made possible by brand managers’ uncompromising prioritization of hard performance numbers over subjective styling considerations. And while this approach has arguably resulted in a less elegant silhouette, it has also yielded an increasingly potent series of cars capable of going, stopping and sticking well beyond what their window sticker would suggest.

Still, ever mindful of the marque’s rich history, Team Corvette has occasionally engaged in a bit of wistful reflection, typically in an attempt to reignite buyer interest in an aging model. Their preferred source inspiration of late has been Zora Duntov’s utterly bonkers ’63 Grand Sport, a lightweight, 500-plus-horse racecar known for its stupefying speed and harrowing driving dynamics. (See racer Delmo Johnson’s rather colorful take on the car, elsewhere in this issue.) The better-known Grand Sports also had an instantly recognizable paint scheme encompassing a fat, body-length center stripe and dual hash marks on the front left fender. This signature look was applied in virtually unmodified form to the limited-production ’96 Grand Sport coupes and convertibles, while a similar, but subtler, treatment distinguished the popular C6 edition, which sold from ’10-’13. 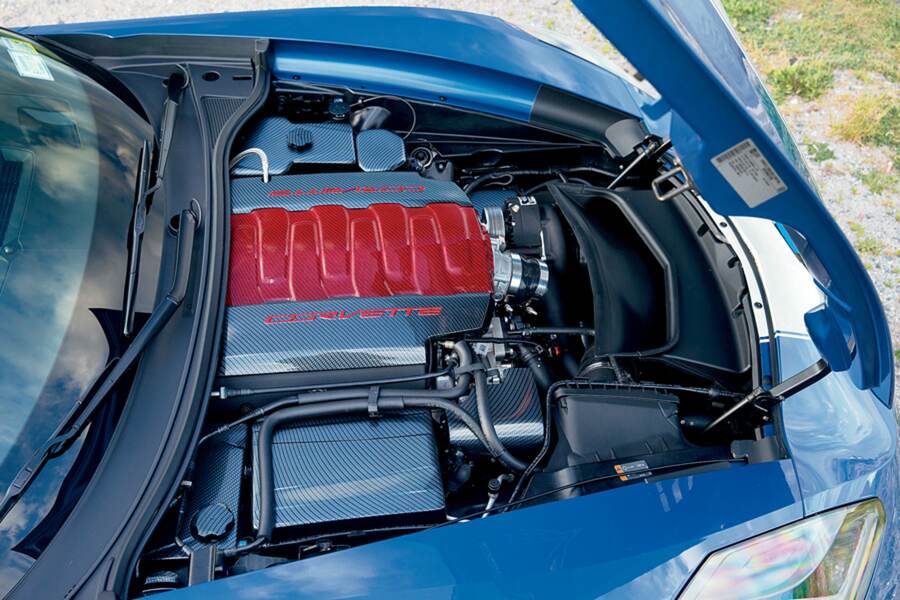 Having been available for less than two full model years, the hot-selling seventh-generation Corvette is clearly in no need of aesthetic rejuvenation. But that didn’t stop Long Islander Bill Mehrkens from treating his Laguna Blue 2014 Stingray to a comprehensive Grand Sport makeover. Whatever you think of the results, it’s clear that, even 52 years on, this race-inspired look hasn’t lost its ability to turn heads.

After owning a series of stock Corvettes throughout the ’90s, Mehrkens found himself fully in the grip of “mod fever,” as he describes it, after purchasing an Electron Blue ’02 coupe. This car would form the basis of Mehrkens’ first Grand Sport project, receiving a white center stripe, red fender hashes, black wheels and even a red interior (replacing the factory black job), just like the ’96 version. A suite of high-performance engine modifications—including an aftermarket heads-and-cam package installed by Amityville’s Vette Doctors—nudged output beyond the 500-hp mark, giving the car plenty of speed to back up its splashy livery. So convincing was the transformation that Mehrkens was invited by the Grand Sport Registry to display his C5 version alongside the factory-built C4 GSs at the Corvettes at Carlisle show.

Although he took a different customizing route with his next Corvette, a Machine Silver ’05, the project hewed to the same theme of creative metamorphosis that had characterized his ’02 build. This time, the target was not the Grand Sport but the recently introduced C6 Z06. A set of Z06-spec fenders, a full-on interior redo—“ Every piece of cheap-looking GM plastic…was replaced with chrome, carbon fiber or custom leather,” Mehrkens explains—and one of the first production examples of ProCharger’s new C6 blower kit gave this standard coupe the looks of (and, at 660 rwhp, considerably more power than) its pricier stable mate. 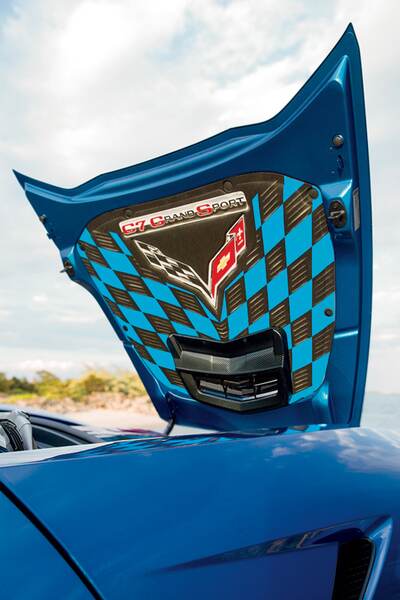 For obvious reasons the ’05 didn’t make it into the GS Registry display at Carlisle, but it did attract the attention of one Corvette personage known to have a taste for performance-modded hardware. “Wil Cooksey, the Bowling Green Assembly Plant Manager, noticed the supercharger,” recalls Mehrkens. “At the time the ZR1 was only a rumor, code named ‘Blue Devil.’ After Wil asked me to rev the car for him, he said, ‘Forget the Blue Devil, you’ve got the Silver Devil!’” A new moniker was born, and naturally more customization followed in the Silver Devil motif.

Although he’d racked up a mantel’s worth of show trophies and other accolades with his C5 and C6 customs, Mehrkens eventually decided to embrace a different aspect of the hobby. “I missed my first Corvette, a 1973, so I sold [my] C5 Grand Sport to purchase an all-original big-block,” he says. “Eventually, the Silver Devil [also] left my garage to become the classic I had always dreamed of, a 1963 split-window coupe. Both received Bloomington Gold and NCRS Chapter, Regional and National Top Flight Awards.”

It wasn’t long, however, before this self-described “Corvette addict” found himself constrained by the hard realities of classic-car ownership. “The problem was, I now had two classic Corvettes that I barely drove,” Mehrkens explains. “I missed having a new one to drive and tinker with. So when word came out about the C7, guess who had to have one?” 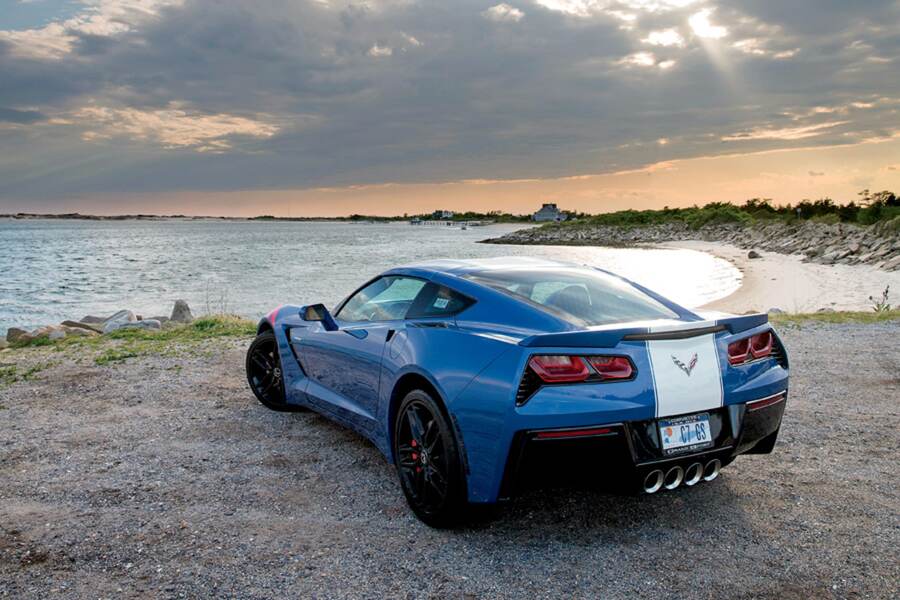 But a quick assessment of his finances (and a tête-à-tête with his theretofore accommodating wife) led Mehrkens to conclude that such a purchase was beyond reach financially, even if he took the drastic step of selling off one of his beloved classic Vettes. It was at this point, in late October 2012, that salvation blew in from the Atlantic at more than 100 mph. Mehrkens is a Mercedes-Benz salesman, you see, and in Hurricane Sandy’s aftermath came a veritable flood of new and repeat customers flush with insurance cash.

“It seemed every Mercedes on the south shore of Long Island was under salt water,” Mehrkens explains. “This resulted in the best seller’s market I’d experienced in 20 years of automobile sales. In the month of November alone, I delivered 63 cars, outselling almost one third of the Mercedes dealerships across the United States.”

With plenty of C7 lucre now in hand, Mehrkens naturally began visualizing a customization plan. And although he initially decided on a continuation of the Silver Devil theme established on his C6, a chance encounter during his annual Bloomington trip set him on another familiar path. 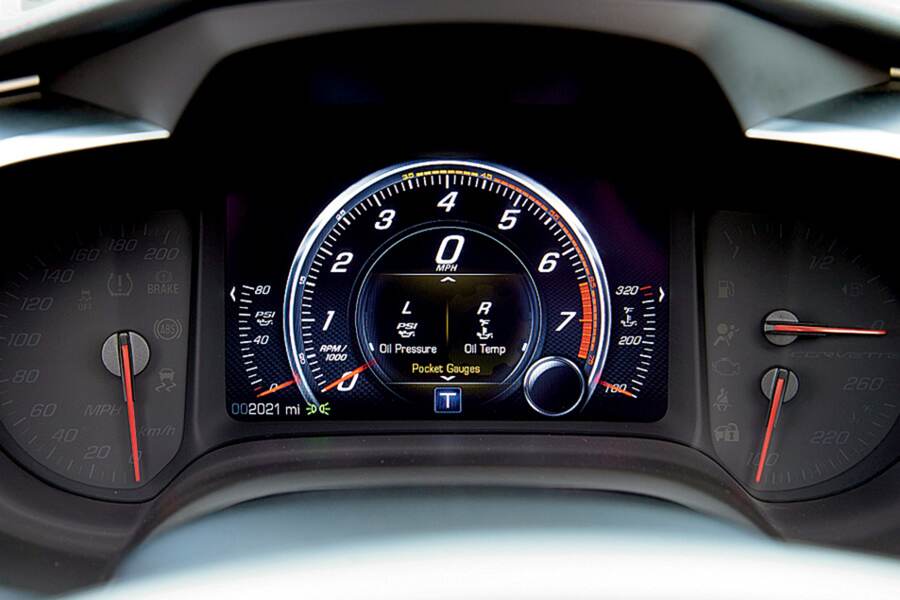 “[I]n June, while attending Bloomington Gold to have my 1963 judged, Chevrolet displayed a Laguna Blue car, and I knew that was the color I had to have,” he says. “Thoughts immediately turned toward a C7 Grand Sport. I wanted the red interior, which meant I had to pay a $590 ‘color override,’ otherwise known as the ‘Chevy Shakedown.’”

After placing his order and enduring a wait he describes as “unbearable,” Mehrkens finally took delivery of his C7 GS-to-be on September 30, 2013. Having taken off the day from work, he was even on site to personally squire the car through the final dealer-prep process. “The dealership was very understanding, as they were on notice not to touch the car except for the minimum mechanical PDI [pre-delivery inspection],” recalls Mehrkens. “There was no way I was going to risk Bubba trying to clean it with a 100-grit rag, or Joey Bag o’ Donuts doing a burnout while on the way to the gas station.”

Mehrkens handled the fueling and cleaning chores himself, then promptly returned to work and parked his new Z51 automatic Stingray right in front of the M-B store, where it stuck out like a Bud Light at a biergarten. And while he admits that the American sports car’s prominent placement—and the considerable attention it garnered—likely did little to abet the sale of frumpy German luxury vehicles, he further concedes that “…it was kind of fun being a rock star.” 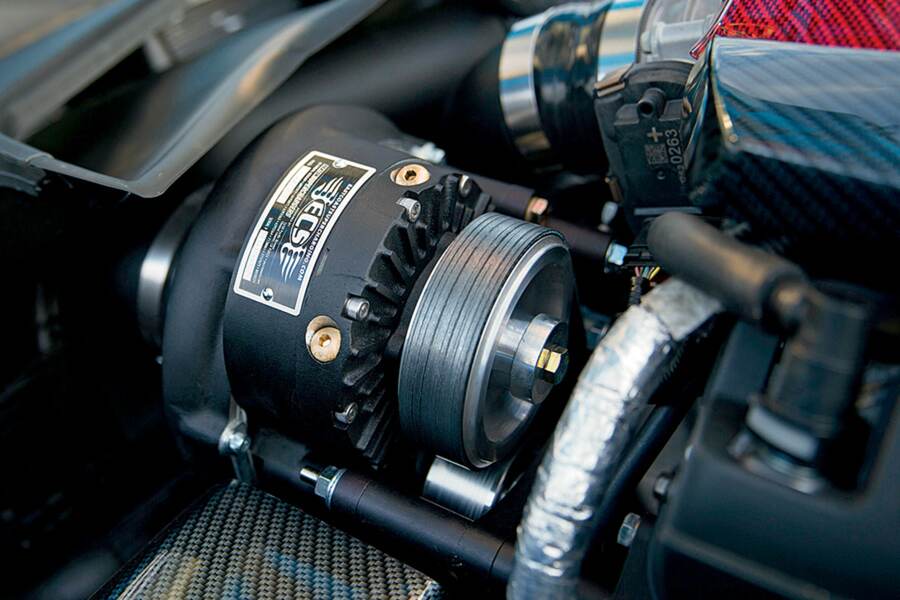 But as dazzling as the C7 was in stock form, Mehrkens had much bigger plans for it—plans he put in motion after just two weeks of ownership. The car was delivered to Michael Schroeck of East End Corvettes and Customs in Cutchogue, New York, who had handled the custom work on Mehrkens’ C5 and C6 projects. Schroeck disassembled the 500-mile Stingray and applied the requisite GS stripes and hash marks, clear-coating over the finished product to ensure it was, in Mehrkens’ words, “…smooth as glass. People who don’t know better think [the paint] was a factory option,” he adds.

Interestingly, that portion of the makeover proved less of a challenge than locating an appropriate set of fender badges, as the originals been discontinued by GM years earlier. Mehrkens was eventually able to hunt down a pair of NOS emblems, which, along with a brace of custom “Grand Sport” headrest logos from interior customizer Arthur O’Neill, completed the visual transformation. The C7 GS predictably proved an instant hit, earning another invite to appear with the Grand Sport Registry at Carlisle ’14 and picking up a Celebrity Choice Award from GM Program Engineering Manager Phil Minch in the process. “Phil said, ‘That’s the way we’d do it [at the factory],’” notes Mehrkens proudly.

Given the healthy performance of his previous GS tribute Vette, it should come as no surprise that Mehrkens eventually tapped his former coconspirators at The Vette Doctors to significantly up the output of the C7 version. A 1500SL centrifugal supercharger system from East Coast Supercharging in Cream Ridge, New Jersey, joined a pair of previously installed American Racing mid-length exhaust headers to summon 570 hp and 585 lb-ft of torque at the rear wheels on a chassis dynamometer. That translates to nearly 700 horses at the flywheel, which should endow this patriotic missile with more accelerative firepower than a seventh-gen Z06. 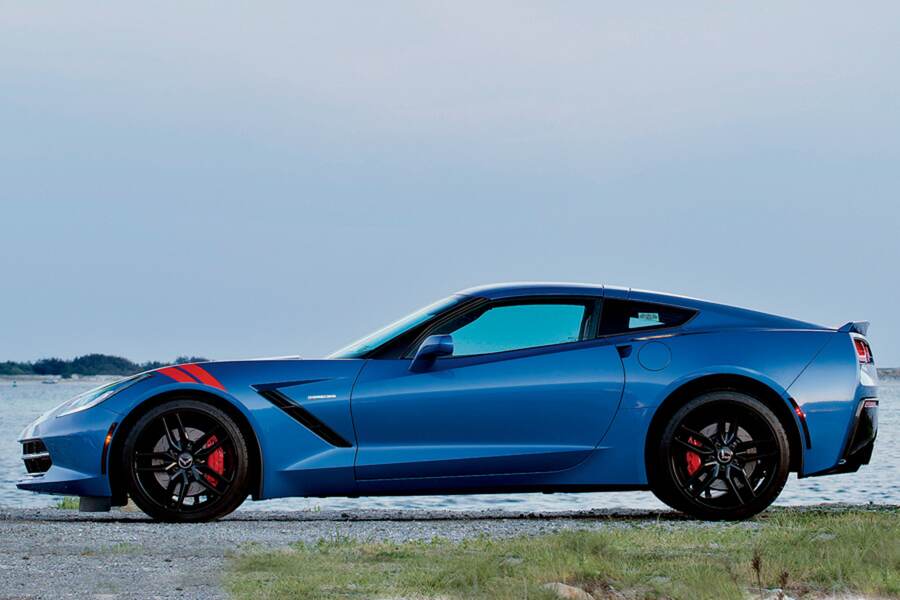 Regarding the likelihood of his commissioning additional engine tweaks in the future, Mehrkens notes that the car “…is scary enough at this level. You get to the point where you accept that no matter what you do, there will always be someone who’s faster.” Cranking up the boost, or delving into the engine’s internals, could also impair the car’s drivability, which is a paramount concern for this seven-time Carlisle attendee. He’s planning to make the trip yet again in ’16, this time to help the GS Registry celebrate its 20th anniversary.

In the meantime, Mehrkens will continue to enjoy this eye-catching tribute Vette as he has for the past two years, driving it as weather permits, admiring it in his garage when it doesn’t and generally upholding the proud legacy of its storied namesake, born more than a half-century ago. Duntov would no doubt approve. 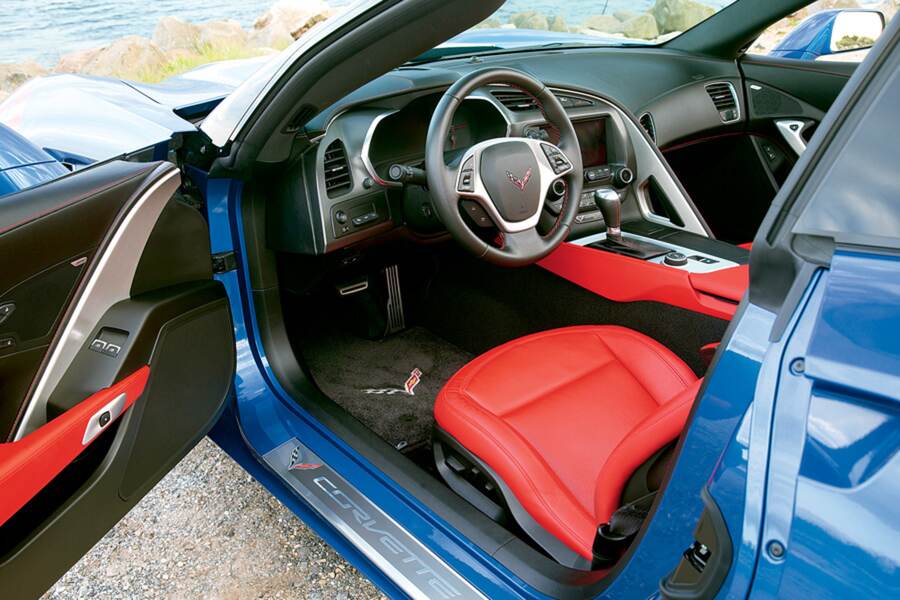 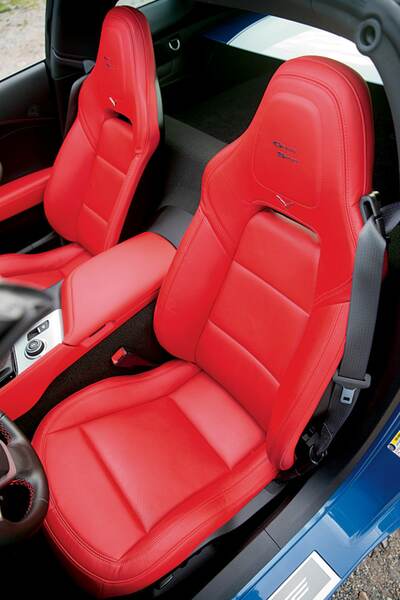 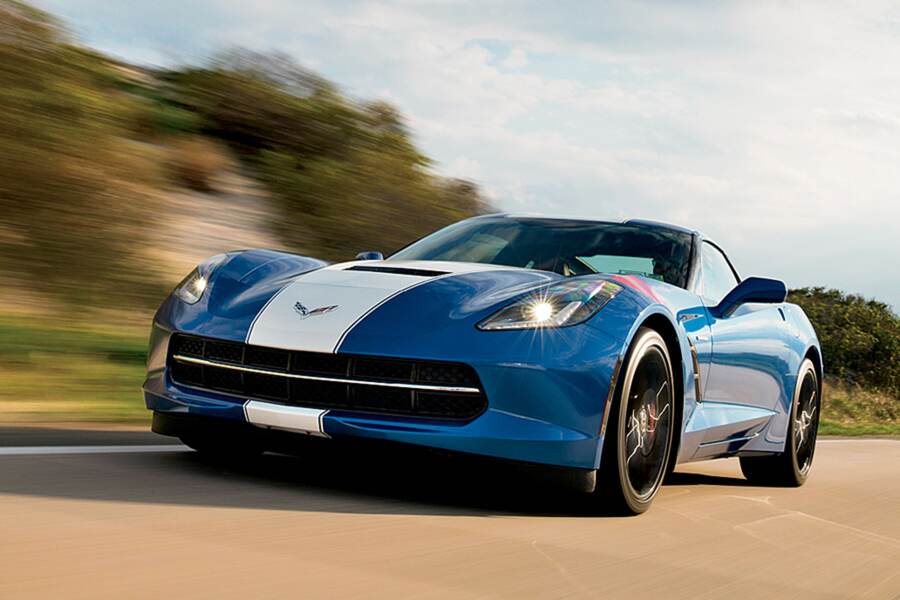 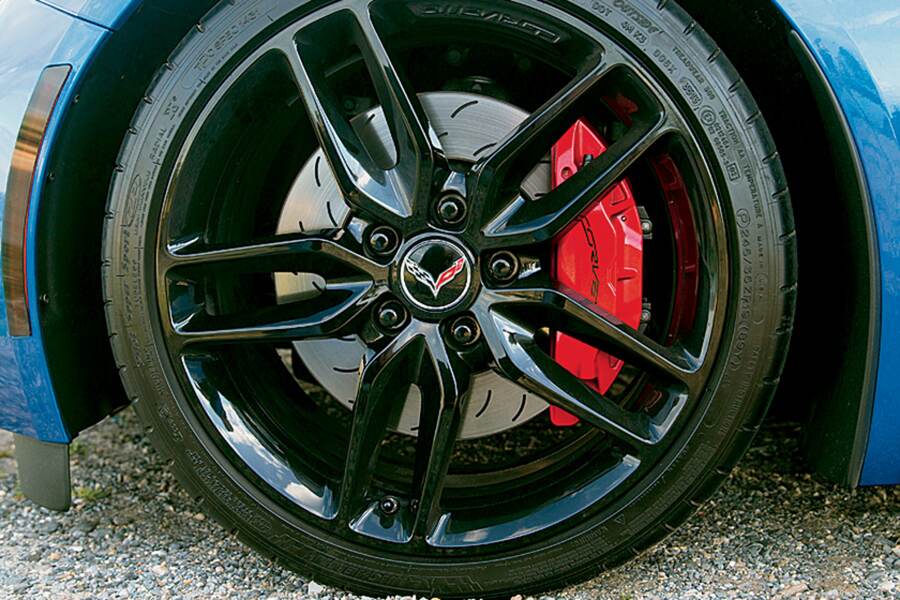 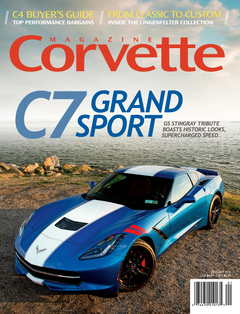