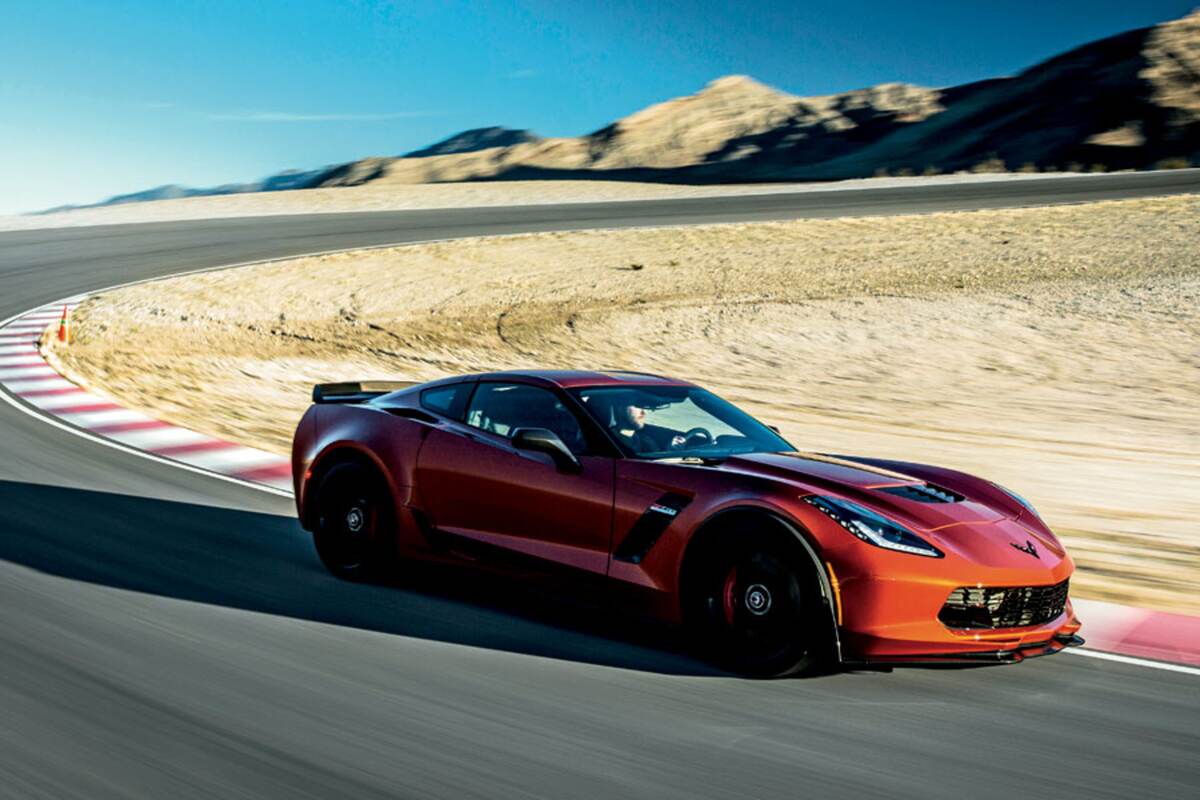 The Z06 is trying to kill me. In a moment of Icarian hubris, I’ve twisted the Driver Mode Selector from Sport to Track mode, sending the car’s electronic babysitters on lunch break and investing myself with virtually unfettered access to every one of the supercharged LT4 engine’s 650 horses. The folly of this decision soon becomes apparent while accelerating hard out of Spring Mountain’s opening right-hander, a challenge I had previously surmounted with minimal drama thanks to the Sport setting’s less permissive traction-control programming. The car’s rectilinear rump swings left, then right, then left again as I frantically attempt to counter-steer my way back onto something resembling a racing line. Though I ultimately succeed, this is one instance in which I’m grateful to have forgotten to activate the Performance Data Recorder and its telltale camera.

“Comin’ outta that corner a little hot, eh?” asks one of the instructors when I exit the car a few minutes later.

Maybe it’s a good thing the Spring Mountain guys have a penchant for understatement, as the Z06’s formidable specs and towering capabilities constitute an invitation to hyperbolize. Thankfully, as I’ll discover over the course of my day in the desert, this is one car that more than lives up to its often breathless advance billing. 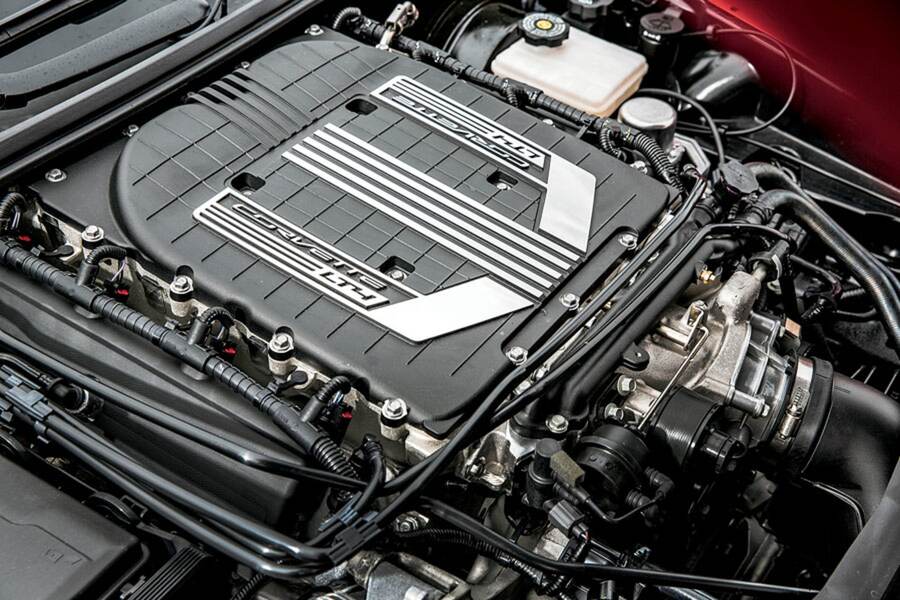 It’s not surprising that Chevy would select Spring Mountain to host this particular press event. The facilities are top notch, the instructors are thoroughly familiar with the C7 platform, and there’s plenty of sandy runoff area separating overconfident writer-types from a fiscally disastrous interface with the tire wall. In fact, you’ll recall that our own Aaron Jenkins put the 2014 Stingray through its paces here last summer (“Accelerated Learning,” March ’15), an exercise that revealed the standard-issue Corvette to be a deeply capable and forgiving road-course accomplice.

The morning begins with a lead-and-follow session intended to familiarize Spring Mountain neophytes (this author included) with the track layout, while also providing a basic introduction to the Z06’s fearsome performance envelope. Though the pace gradually quickens from bracing to exhilarating 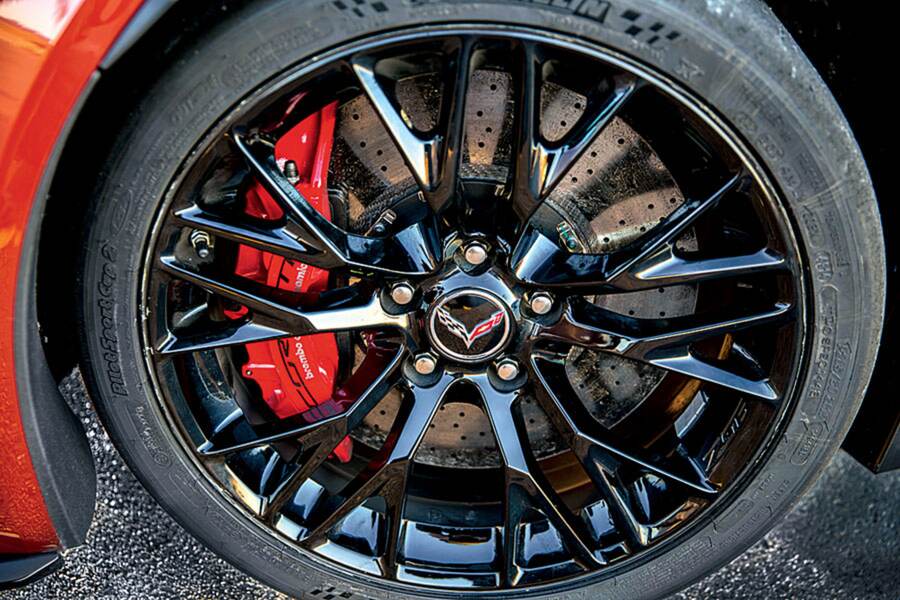 to something just short of a 9/10ths banzai run, our manual, Z07 Performance Package–equipped test car is utterly unfazed by the exercise. The 6.2-liter LT4 summons preposterous velocities, the carbon-ceramic brakes just as ably dispel them, and the Michelin Pilot Sport Cup 2 tires work in conjunction with the Z06-standard electronic limited-slip differential (eLSD) to translate every last pound-foot of torque into forward motion. And while Spring Mountain’s relatively short straights mean we’re unlikely to reap the full benefits of the Z07’s finely tuned aerodynamic enhancements, they’re sure to pay dividends on more-expansive courses such as Sebring, VIR and the like.

Aside from that, the Z06 cleaves to the same driver-focused formula that makes the base C7 such a fine instrument with which to conduct the business of serious motoring. The steering conveys precisely what’s going on under the front contact patch, the seven speed’s shifter unfailingly finds the desired detent, and the Active Rev Match feature continues to catalyze our wildest Tudor United SportsCar Championship fantasies. Even the whine from the 1.7-liter TVS supercharger remains muted under hard acceleration, which is especially impressive considering that its rotors spin at up to 20,000 rpm (as compared with a max of 15,000 rpm for the LS9’s 2.3-liter unit).

Don’t be fooled by the new blower’s comparatively diminutive displacement, however. Its smaller size enables quicker spooling, which, along with the enhanced low-speed torque of the direct-injected LT4, makes for positively crushing acceleration at any engine speed. 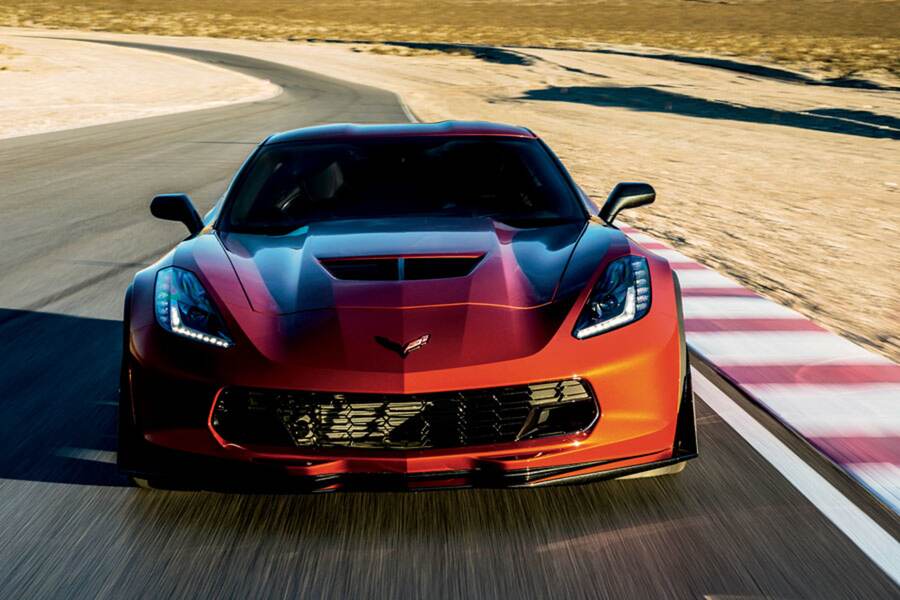 This trait becomes eye-openingly apparent during a follow-up track session in an automatic Z07. Having attained what I believe to be a comfortable familiarity with the Z06’s power-delivery characteristics, I decide to try a few laps in Track mode. I’ve done this many times in the 8L90E Stingray, after all, a car that seems almost tailor made for throttle-controlled drifting. But in this regard, at least, the new Z06 has more in common with its C6 namesake than it does with the base C7. Resolute grip from the fat Michelins enable the car to hold on well past the point of prudence, but when the rear does break loose, it does so with a vengeance. Having discovered this for myself and lived to tell the tale, I resume a more measured pace for the remainder of the session, and it passes without further incident.

To prove that the Z06 is more than a single-minded track assassin, Chevy next dispatches us on a 90-mile highway loop. The route runs north up 160, jinks west on 95, then dives down into the eastern California badlands, skirting the ominously named Funeral Mountains Wilderness Area before leading back to the relative safety of the Spring Mountain campus in Pahrump, Nevada. 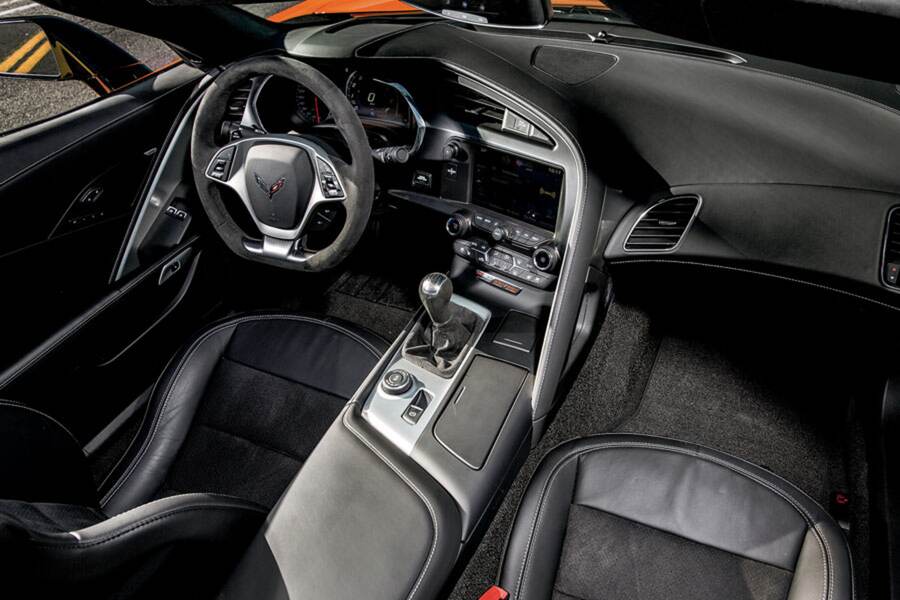 Just outside town, the vestiges of civilization fall away and I find myself aiming down the barrel of a miles-long straightaway that seems to run right off the edge of the world. Although we’ve been warned of the dangers posed by this unforgiving environment—bilious staties, jackrabbits the size of poodles, foil-hatted nutters in pickup trucks—the temptation to sample the full fury of the LT4 on the open road proves irresistible. Rolling along at just above the posted speed limit, I stand on the throttle.

In what became a widely circulated quote, Corvette engineering supremo Tadge Juechter claimed at the Z06’s 2014 NAIAS debut that the new car’s acceleration made the 638-hp C6 ZR1 seem “sluggish” by comparison. He was not exaggerating. For while the hard numbers are duly impressive—2.95 or 3.2 seconds to 60 for the automatic and manual cars, respectively, along 10.95- and 11.2-second quarter-miles, both at 127 mph—no amount of stat-sheet scrutiny can prepare one for the accelerative wallop this car packs at WOT.

Imagine flooring the gas pedal of a merely fast automatic vehicle while traveling at, say, 20 mph. The trans downshifts, the engine drops into the sweet spot of its powerband and you’re thrust back in the seat as the car lurches forward, nose up, like a tasered Brahman. Thanks to its 650 lb-ft of torque and fast-acting 8L90E eight-speed, the Z06 I’m piloting is capable of duplicating this experience at 90 mph. More impressive, acceleration does not dim discernibly above that speed; the car simply continues surging ahead as if it’s trying to devour the far horizon. Z06 owners could charge money for this, so addictive is the rush it brings. 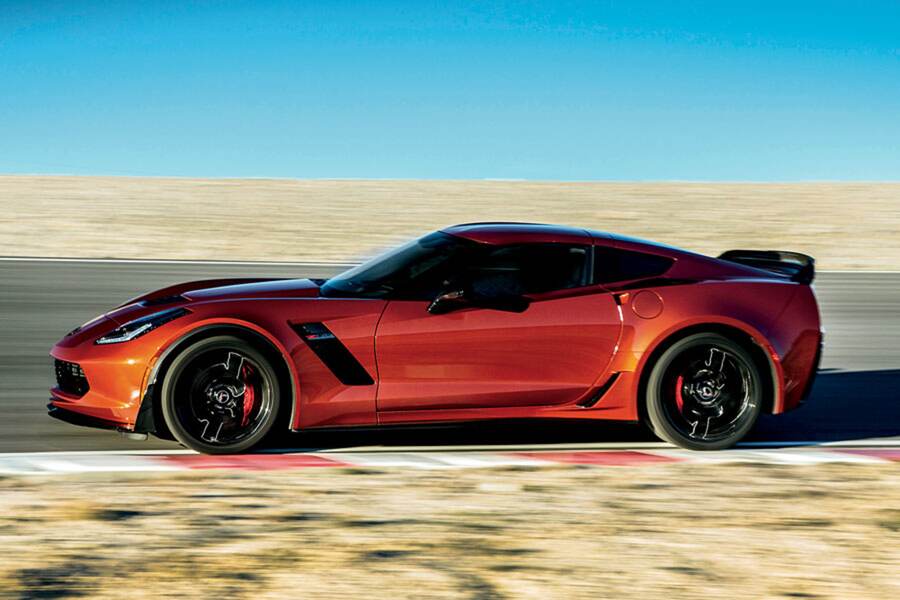 Addictive, but foolhardy on a public road, even out here in nowhereland. I ultimately lose my nerve when the car touches 145, around which time the quality of the road surface deteriorates markedly. There’s no cell reception out here, after all, and wadding up GM’s $90,000 (with options) tester before decamping on foot for Mexico might look bad on my résumé.

Dropping from Sport into Touring mode slackens the suspension, injects a hint of Novocain into the steering and further mutes the gurgle from the Z06’s dual-mode exhaust. The Competition Sport seats continue to impress as an ideal compromise between supple and supportive, and squeezing the optional suede-wrapped wheel remains one of Corvette-dom’s guiltiest pleasures (though we still harbor doubts regarding this unconventional material’s ability to endure the horrors of protracted Cheeto-Finger exposure). All in all, the Z06 fully retains the base Corvette’s predilection for grand touring, which makes perfect sense given that the great majority of customer cars—even Z07s—are sure to be used in this fashion.

I’d write something about the Z06’s behavior in traffic, if only there were traffic in the southern Nevada-fornia desert, which there isn’t. Even the poodle-size jackrabbits have decided to give the Z06 a wide berth, perhaps not surprising given the car’s fiery Daytona Sunrise Orange finish and come-at-me-bro visage. After pottering through several real-life ghost towns and past more buttes than I care to count, I hand over the keys and reluctantly resume the life of a non-Z06-driving schlub. 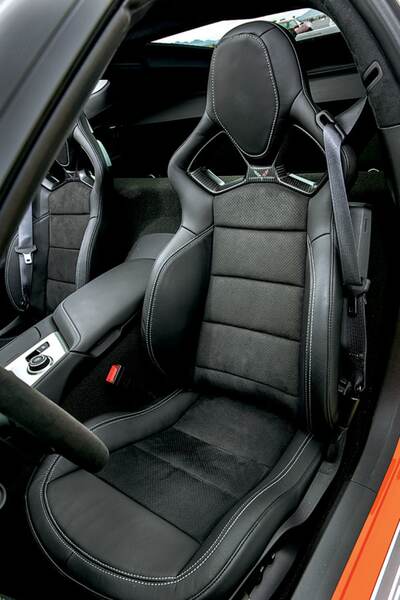 Looking back, it’s clear to me that the central tension embodied by the 2015 Z06 is one of dynamics vs. electronics. Like the F-117 Stealth fighter, an airplane whose design is so radical that it literally will not fly without the aid of powerful fly-by-wire computers, the Z06 is a car whose vast performance envelope must occasionally be circumscribed by stability and traction aids, lest it exceed the capabilities of the average operator. And while this approach works just fine for the most part, it does the prompt the question of whether it might be time to consider a more permanent solution, one capable of serving this flagship performance car well into the future.

In the past, I’ve expressed skepticism as to whether GM has the corporate will and financial wherewithal to finally make good on Duntov’s dream of building a mid-engine Corvette. Now, having driven the C7 Z06 at its limits and beyond, it’s clear to me that the company no longer has a choice. 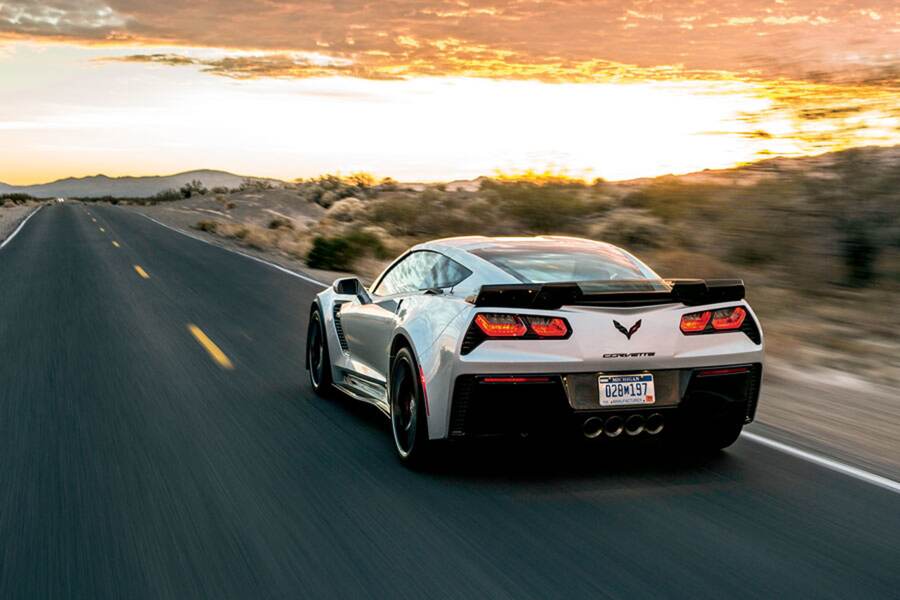 Bring on the Zora. 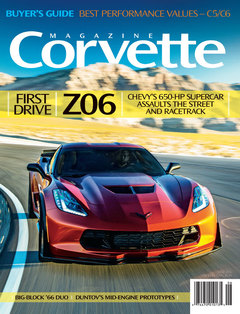 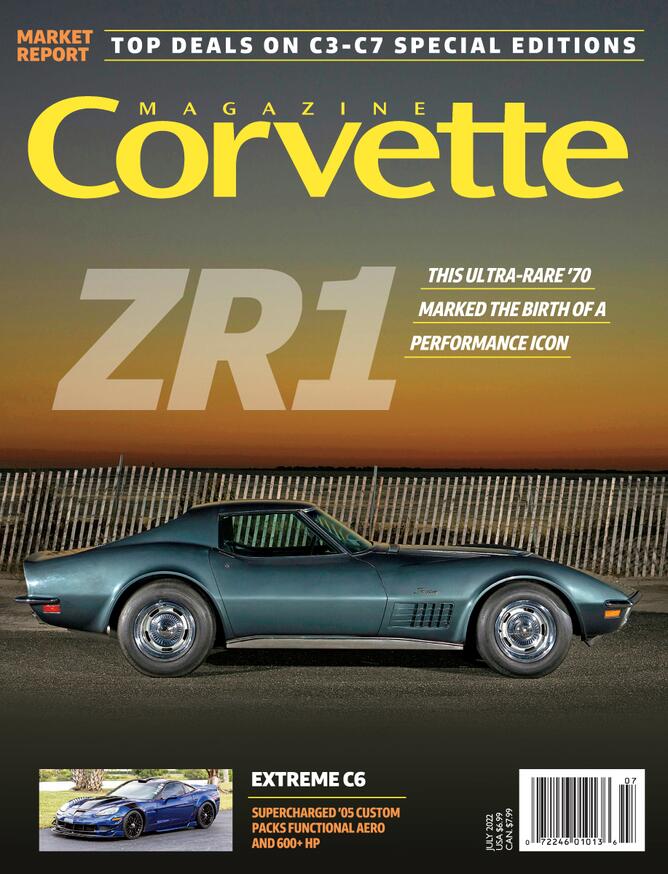