In which we learn that, when it comes to the ultimate in Stingray performance, the choice may now be automatic 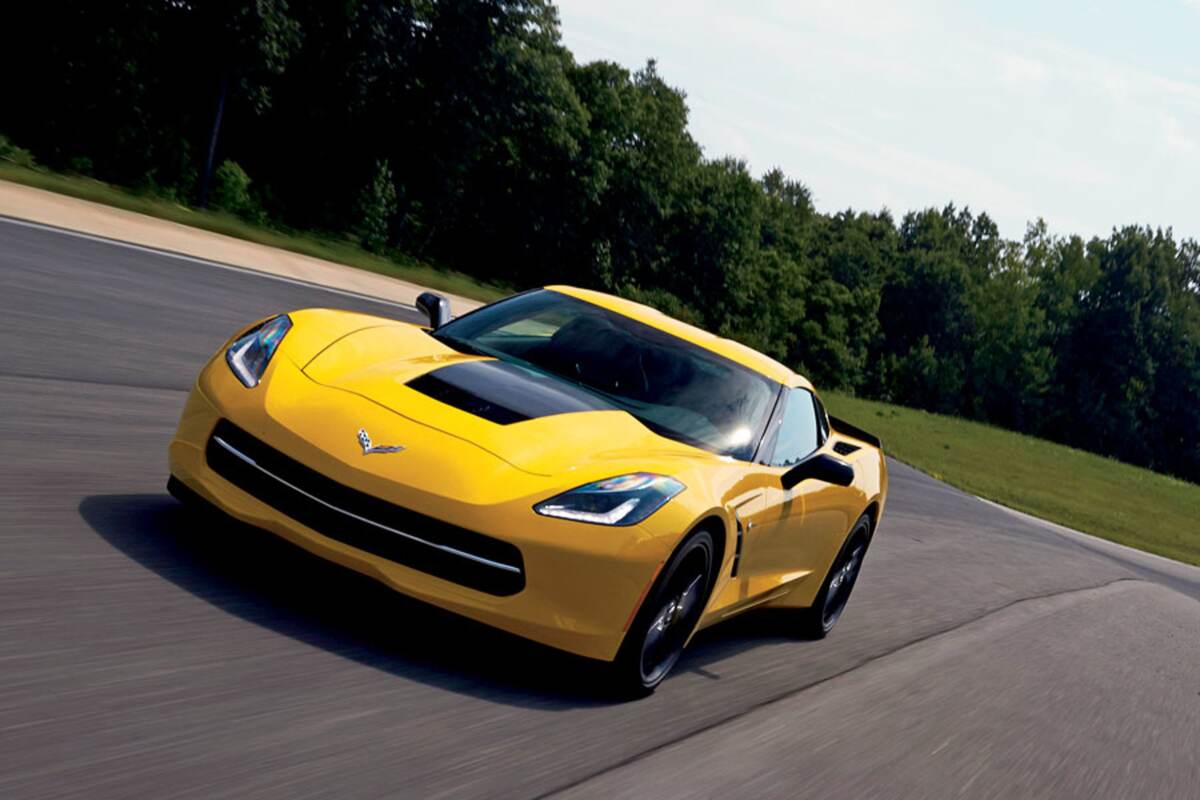 I’m not this good.

The thought materializes approximately halfway into my first lap around GM’s Milford (Michigan) Road Course, a hellish gallimaufry of blind hairpins, decreasing-radius sweepers and breakfast-disgorging hillocks, all designed to push the General’s most capable performance vehicles to their limits and beyond in pursuit of short-term speed and long-term durability. For the engineers who run flat-out here every day, MRC likely packs the pulse-quickening quotient of a Mel Tormé concert. But for a neophyte like me, visions of shattered fiberglass and enduring mortification loom at every chicane.

Happily the focus of today’s evaluation, a Z51 Stingray equipped with the new-for-2015 eight-speed automatic transmission, quickly reveals itself to be a capable and forgiving coconspirator, responding faithfully to my inputs when it’s prudent to do so and tempering them to the extent necessary when it isn’t. That’s not too surprising, considering that a penchant for working in concert with the driver to optimize dynamic performance is the seventh-generation Corvette’s signature trait. 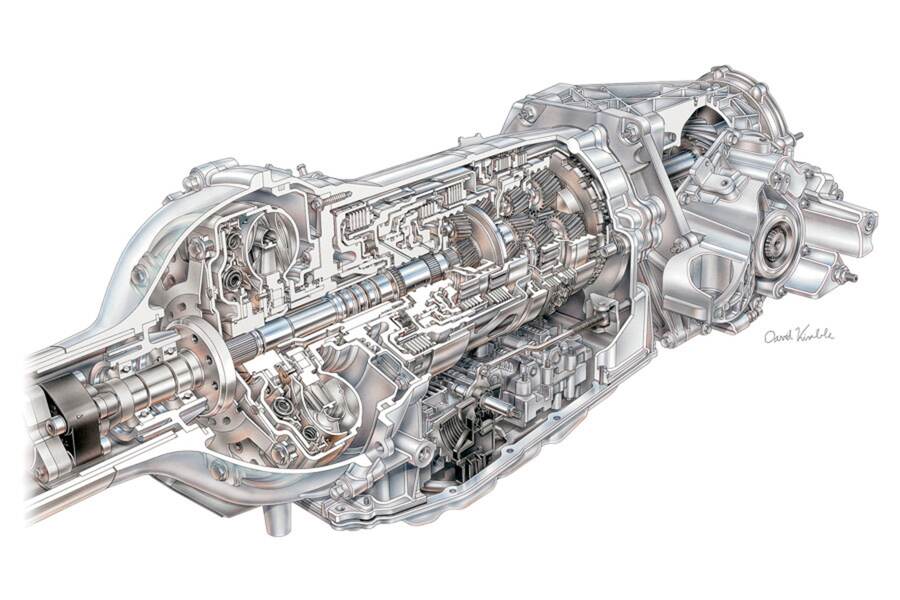 What is surprising is the degree to which the new 8L90E trans alters the character of the two-pedal ‘ray, transforming what was already a capable all-rounder into an uncompromised implement of road-course dominance. Indeed, in the laps that follow, and on a subsequent highway cruise outside Detroit, this latest self-shifter will make a compelling case for being not just a viable alternative to the seven-speed manual, but perhaps a superior one.

What’s in the box?

Given the freshness of the Stingray platform, one could be forgiven for assuming that GM’s powertrain division created the new eight-speed by simply stuffing two extra cogs into the existing 6L80E auto, expanding the case to accommodate them, and calling it good. This approach was not an option, however, due to the lack of available space in the C7’s trans tunnel as well as Team Corvette’s desire not to upset the car’s near-ideal weight balance. These design requirements forced a more comprehensive rethink of the transmission’s internal components, with impressive results. 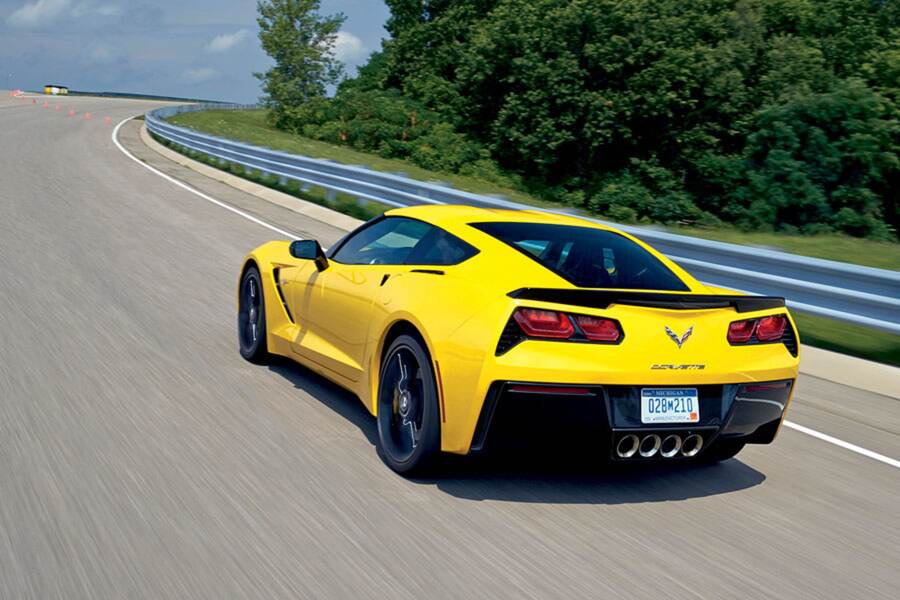 Project engineers are justifiably proud that the 8L90E has been awarded more than two dozen patents for its innovative innards, which include four simple gearsets, a pair of open clutches and the industry’s first binary-vane pump. The latter item features two output levels, high and low, to provide an abundance of fluid flow when it’s needed, and more-economical operation when it isn’t. These efficiency improvements yield an impressive 30-percent spin-loss reduction as compared with the outgoing six-speed, meaning more of the LT1’s (or LT4’s) total output makes it to the rear wheels when you mat the go pedal.

Incredibly, the 8L90E houses it all inside a case with the same exterior dimensions as that of its predecessor, meaning that no modifications to the Stingray structure were required. And thanks to the liberal use of magnesium—for the piston housing and channel plate—and aluminum—for the input carrier, clutch housings, certain clutch pistons and case—the 8L90E is eight pounds lighter than the 6L80E as well.

While conventional wisdom holds that the more gears an automatic transmission has, the less durable it tends to be, the new eight-speed again proves an exception. Indeed, we’re told it was developed from the outset for use behind the Z06’s supercharged LT4, which makes perfect sense given its maximum-torque rating of 650 lb-ft. 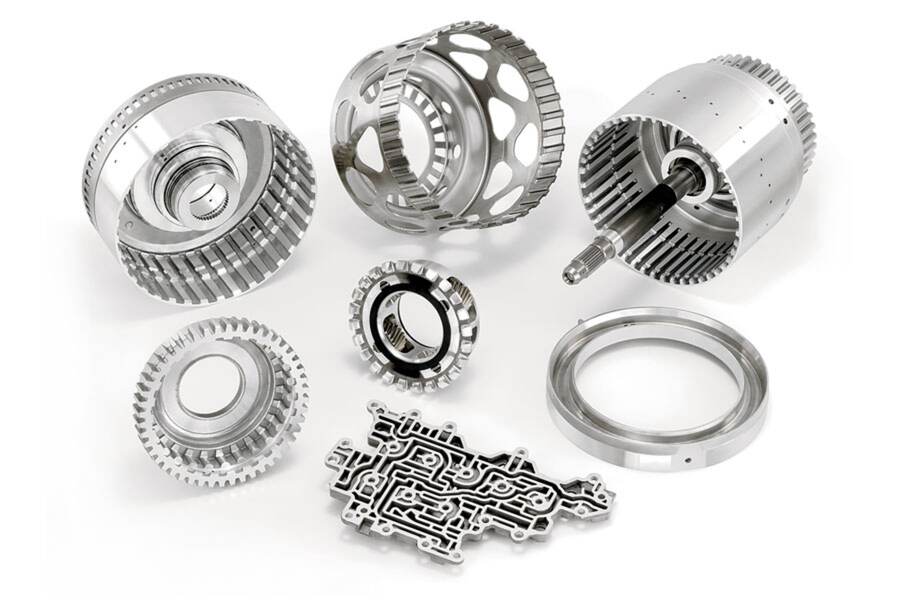 Clearly the 8L90E is a stout, thoroughly modern piece of hardware, but does its cutting-edge design pay dividends in the area of performance as well? Yes, and in a big way, according to GM. By employing smaller ratio steps between gears, the eight-speed keeps the engine at or near its torque peak more consistently during acceleration. Factor in a shorter, 4.56 First-gear ratio (vs. the 4.03 cog used in the six-speed), and the ’15 Stingray automatic is capable of 3.7-second dashes from 0-60, along with 11.9-second quarter-miles. That’s a tenth quicker than last year’s auto and the seven-speed manual car in both categories.

So the new clutchless Vette is fast in a straight line. Surely the row-your-own ‘ray is still quicker around a track, right? Sorry, but unless your weekend diversions include driving a Corvette whose name ends in “.R,” probably not. The 8L90E’s computerized brain, which bears the Terminator-approved appellation T87, operates at four times the speed of last year’s control module. Allied with no fewer than three speed sensors, this electronic Einstein is capable of dialing up single- or multi-step shifts with breathtaking rapidity. GM claims WOT shift times up to .08 second quicker than Porsche’s PDK dual-clutch trans, a stunning achievement for a conventional torque-converter-equipped automatic. 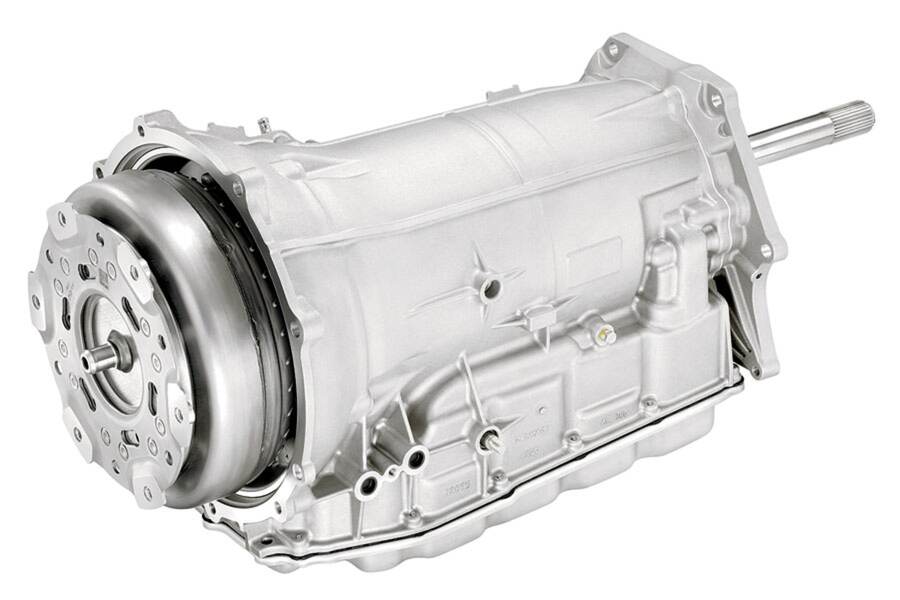 Slipping two extra speeds into the trans also allowed engineers to raise (numerically lower) the Stingray’s axle ratio from an already-tallish 2.56 to a positively Manute Bol–like 2.41, a change that, along with the 8L90E’s more efficient design, helps boost the car’s EPA highway rating from 28 to 29 mpg. If ever there existed a case in which it was appropriate to employ the hackneyed expression “win-win,” this is it.

Over the years we’ve encountered numerous instances (though typically not involving Corvettes) in which an spiced-up spec sheet failed to translate into a meaningfully improved driving experience, especially in a high-performance context. The Corvette crew are no doubt aware of this, which helps explain their keenness to have us flog the eight-speed Stingray on the normally off-limits Milford course. 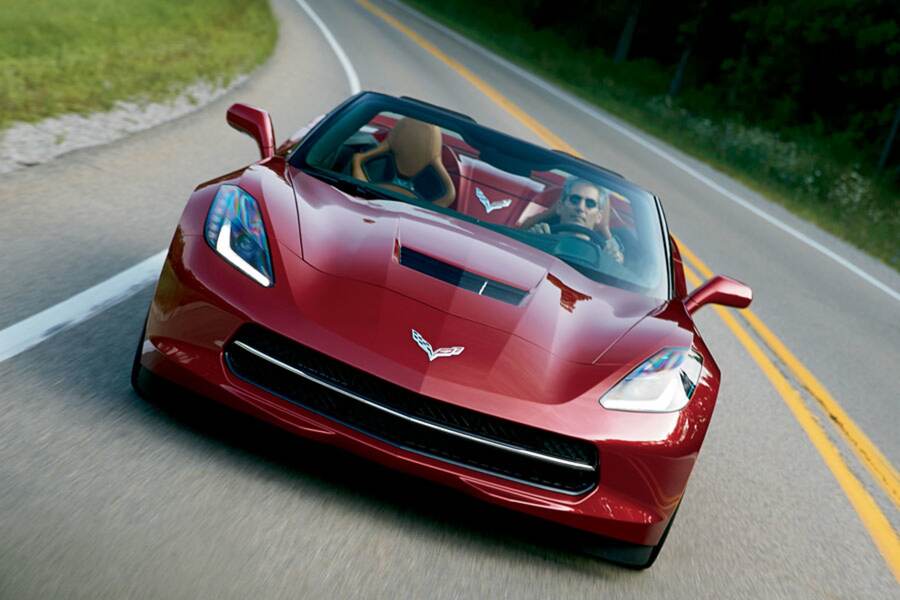 The morning begins with a ride-along lap with one the Corvette-team engineers, who makes a point of not using the car’s column-mounted paddle shifters. “It’s actually faster this way,” he notes casually, while negotiating the wicked right-hander at the end of MRC’s opening straightaway. “Even [GM test-driver extraordinaire Jim] Mero was faster letting the car shift itself.”

If the 8L90E’s gear-selection algorithms are good enough for Mero, they’re more than good enough for me. After our familiarization lap, I select the Performance Traction Management (PTM) system’s Sport 2 mode, drop the gear selector into “D” and, once cleared by track personnel, accelerate hard onto the straight. The LT1-powered Stingray builds speed with a familiar effortlessness, but there’s nothing familiar about the operation of the new eight-speed. Upshifts are closely spaced and incredibly quick—“almost like a motorcycle,” in the words of another driver—and the trans sheds gears just as aggressively during hard deceleration.

Pushing deeper into the course, it strikes me that the 8L90E always seems to be in precisely the right gear for the situation at hand, even if that means hanging the tach needle in the top third of its travel for a several seconds at a time. This proves a tremendous help in MRC’s tight esses, where an unwanted upshift could upset the car’s balance and kill forward momentum. Not even a downright diabolical traffic-cone chicane, set up by GM personnel to reduce speeds entering the straightaway, proves capable of tripping up the eight-speed’s computerized brain. It’s a feat no other conventional automatic could manage, and the confidence it instills is exhilarating.

Given the inevitability of the auto-vs.-manual comparisons, it’s interesting to note that no one from GM can—or, perhaps more accurately, will—provide hard numbers on how the two versions match up around MRC. But based on my experience, it’s pretty clear that unless you’re very, very, very good, an eight-speed Stingray will get you around most road courses faster than will a seven-speed one, and with far less effort required. Whether that makes it the better choice depends entirely on your perspective, but either way, there’s no denying that the 8L90E represents a major watershed in the evolution of the Corvette transmission.

After lunch, I’m paired up with another eight-speed Stingray for a 44-mile highway cruise on Michigan’s pocked and frost-heaved Interstate 96. Having already wrung the car out in a proper venue, I’m content to take it easy here and focus on the C7’s sybaritic side, whose cosseting qualities are diminished not at all by the new eight-speed. Indeed, with the cruise control set to 70 mph and the LT1 quietly loping along at just over 1,000 rpm in Eco mode, it’s almost possible to forget that I’m in command of the most capable base Corvette in marque history. But depress the throttle to pass, or to merge with traffic, or just, well, because, and the C7’s true character quickly asserts itself with an ursine bellow and a fusillade of jackhammer downshifts.

Despite hitting a few clots of traffic along the way, the car returns a creditable 22.3 mpg over the course of the drive. Given a lightly trafficked road and a longer stretch during which to establish a proper average speed, the automatic Stingray’s EPA-certified highway figure of 29 mpg—the same as the manual, incidentally—seems well within reach. (Cool 8L90E fact: Corvette Chief Engineer Tadge Juechter notes that the car actually returned 29.49 mpg during certification testing, just shy of rounding distance to the magic 3-0 mark.)

Looking back at my Milford trip, one instance stands out as being particularly illustrative of the modern Corvette ethos. On my last lap of the day at MRC, I decide to put the Stingray’s reputation for imperturbability to the test by intentionally romping the throttle on corner egress with the wheel partly cocked, a maneuver that would send most powerful rear-drive vehicles slewing hopelessly sideways in a cloud of atomized rubber. But thanks to the C7’s coordinated suite of electronic driver aids—PTM, Magnetic Selective Ride Control and that quick-thinking T87 trans module—the car does what would previously have been unimaginable: it unhesitatingly selects the proper gear, allows the rear to settle, then gradually doles out the torque as traction and vehicle attitude permit. The result is an easily managed power slide that, although not the fastest method of reaching the next turn, is definitely the most fun. I may not be that good, but thanks to the eight-speed Stingray, I don’t have to be. 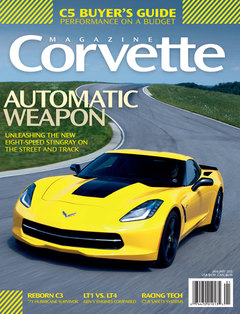