The GS90 was Dick Guldstrand’s way of giving the C4 ZR-1 the extroverted looks its supercar-grade engine deserved. 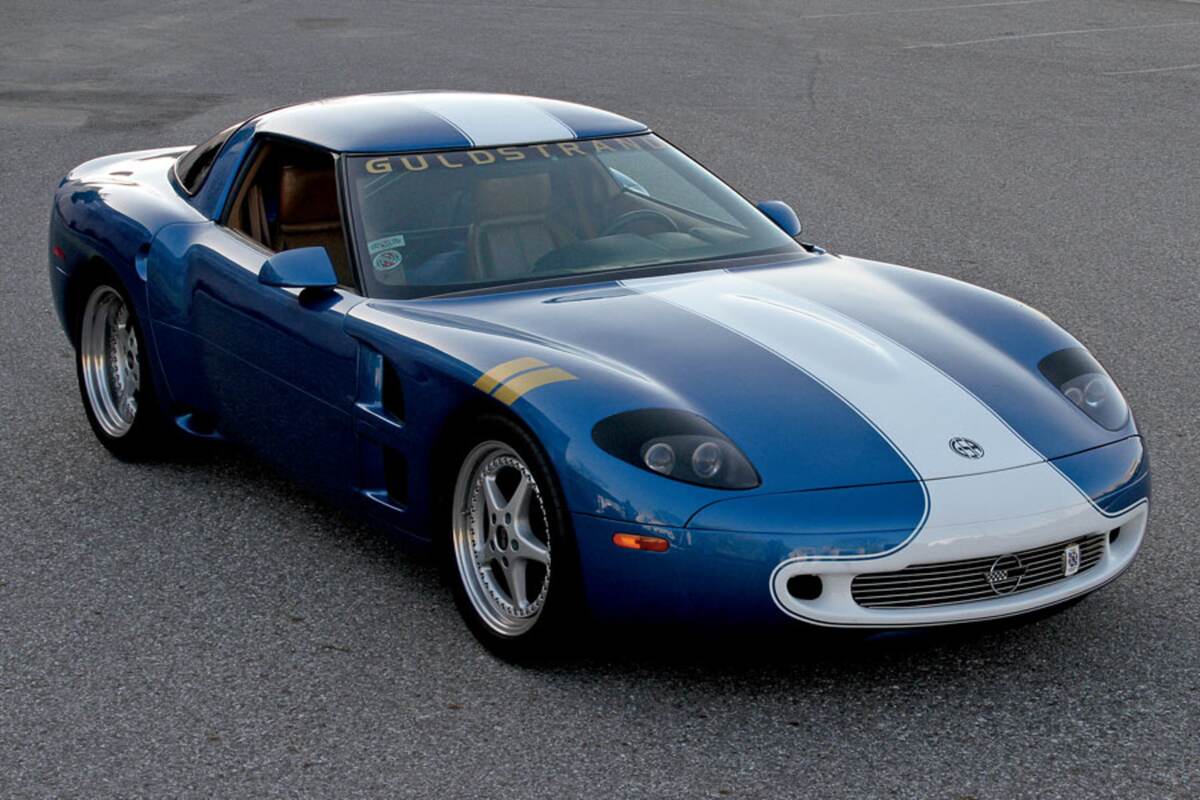 It is a quiet afternoon in the desert. We arrive a little early at the meeting point, a private automotive museum near Riverside, California. We are standing in the parking lot enjoying cups of coffee after the drive out from the hectic, noisy Los Angeles basin. And then we hear it: that unmistakable low, rumble of a powerful V8 engine

A second later a sleek, blue-and-white sports car hoves into view. I sense it is a late-model Corvette, but it’s rounder and more sensuous-looking. It looks European, with the long hood and short tail of a ’60s-era Italian berlinetta. The styling is clean and beautiful, and the car appears ageless. Only the shape and tilt of the windshield suggest that it started out life as a C4 ZR-1. What we’re looking at is a rare Guldstrand GS90.

Dick Guldstrand is known to to car buffs as Mr. Corvette. Originally this was because of his success road racing Chevy’s sports car. He won three consecutive Pacific Coast Championships (1963-65) in Corvettes. He also won the GT-class at the 1966 24 Hours of Daytona, set a GT-class track record at Le Mans in 1967 and drove Corvette Grand Sports for Roger Penske. 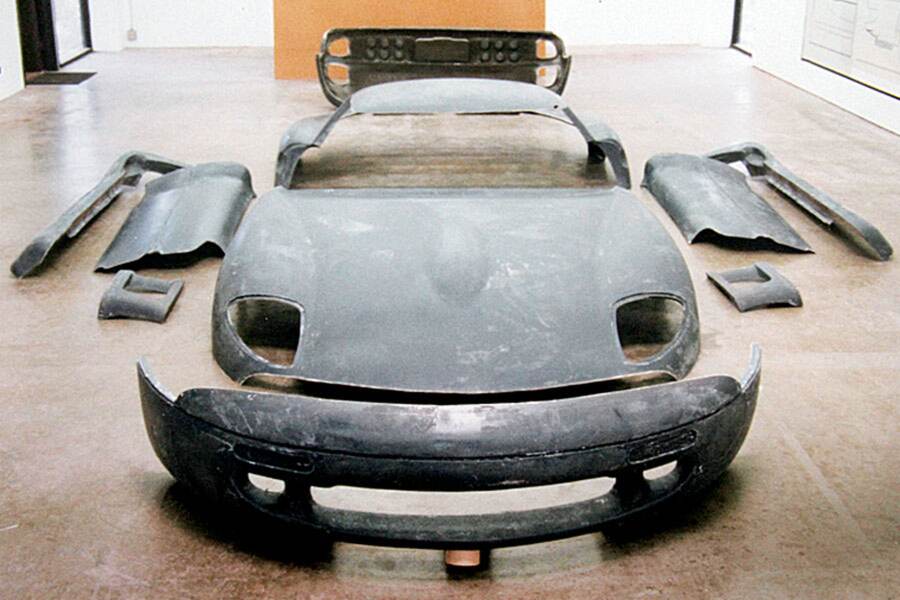 After hanging up his helmet, Guldstrand founded Dick Guldstrand Engineering, which built high-end, custom-tuned Corvettes for discerning customers. But Guldstrand kept close ties with the Corvette team at GM, often consulting for it in various areas, especially suspension setup. Guldstrand is now in his eighties and recently semi-retired, but his shop, now under new ownership, endures in Burbank, California; he still comes in regularly to help out.

Though most of Dick Guldstrand Engineering’s Corvettes were built on an individual basis according to the whims of each owner, the company did develop distinct models, which it sold in small batches. The first was the Grand Sport 80, of which roughly 20 were built. Introduced in 1986, the GS80 was a $15,500 package for the C4. The standard 350-cubic-inch L98 engine was swapped for a Traco-built big-bore 372-cid V8 cranking out 375 horsepower—a 145-hp increase. The car was then fitted with a comprehensive suspension upgrade. Other than the fitment of aftermarket wheels and small “Grand Sport 80” stickers, the exterior remained unchanged. This would not be the case with Guldstrand’s next limited-edition Corvette model.

The idea for the GS90 began with the debut of the ZR-1 in 1989. Guldstrand was impressed with this Corvette’s 375-hp engine but not its appearance. “The four-cam engine in the ZR-1 really grabbed my attention,” he says. “It was just an incredible thing to drop in a Corvette. Trouble was, the body looked just like all other Corvettes. So, here’s this $30,000 engine option in a $25,000 car. It just didn’t work.” 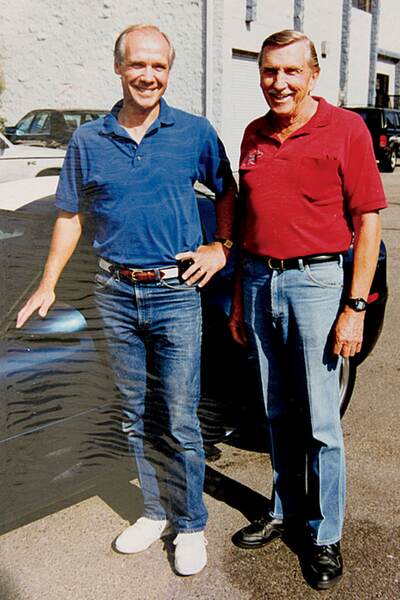 The GS90 was Guldstrand’s remedy for this situation—a ZR-1 with knockout looks, as well as even more performance.

The GS90’s styling was the work of Steve Winter. Educated in England with degrees in automotive engineering and design, Winter’s first job out of school was with Porsche, where he helped create the 924. After that he worked for BMW and then Volvo, Mazda and Ford in Australia before immigrating to the United States. He was head of automotive design at Design Works USA in California, as well as instructor at Art Center College of Design, when he presented Guldstrand with renderings of a classically styled modern Corvette. Guldstrand liked what he saw.

Having received the green light to proceed, Winter went to work on clay mock-ups, eventually arriving at the GS90’s final design. What he created was a dramatically reimagined C4 ZR-1, with swoops and curves replacing the sharp creases and flat panels of the production car. The hood and front fenders were rounded, almost like a Jaguar E-Type’s or those of a Ferrari 250 Testa Rossa. The GS90’s wraparound tail was a complete departure from the ZR-1’s angular rear end. 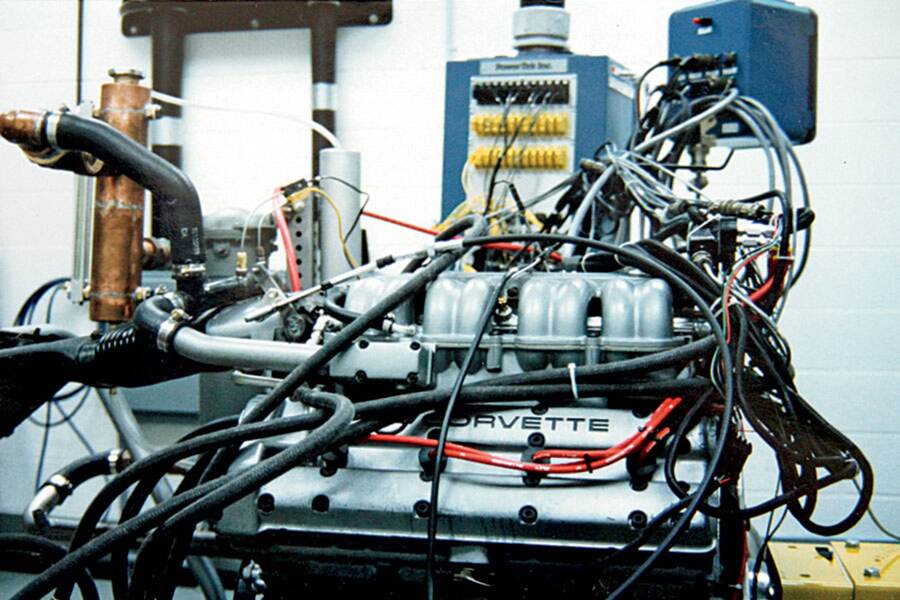 The multiple round taillights were inspired by those found on the Corvette Grand Sports Guldstrand once raced for Penske. In another cue from racing, all of the scoops and vents were functional. The rear window was plastic rather than glass in order to conform to the new teardrop shape and to save weight; the fact that it was fixed in place also sheds pounds. (Any cargo had to be placed behind the seats.) The body panels were constructed of a combination of fiberglass and carbon fiber, with most of them being hand-built in Signal Hill, California by Ray Petre.

In terms of stepping up the ZR-1’s output, Guldstrand was well aware of the pressure society was putting on car companies to make their vehicles more environmentally friendly in the early ’90s. “I was terrified of becoming politically unacceptable,” says Guldstrand. At the same time, he wanted to offer his customers increased performance, so he needed a novel approach to engine tuning. Fortunately, a friend and future partner in the GS90 enterprise, Jerry Williamson, had been working with alternative fuels up in Canada. He suggested the use of natural gas.

At the time, natural gas was the most promising alternative fuel. “It is 98-percent cleaner than gasoline, doesn’t need to be refined and greatly enhances the life of the engine and its motor oil,” says Guldstrand “And it’s 130 octane! You can start being a hot-rodder again.” 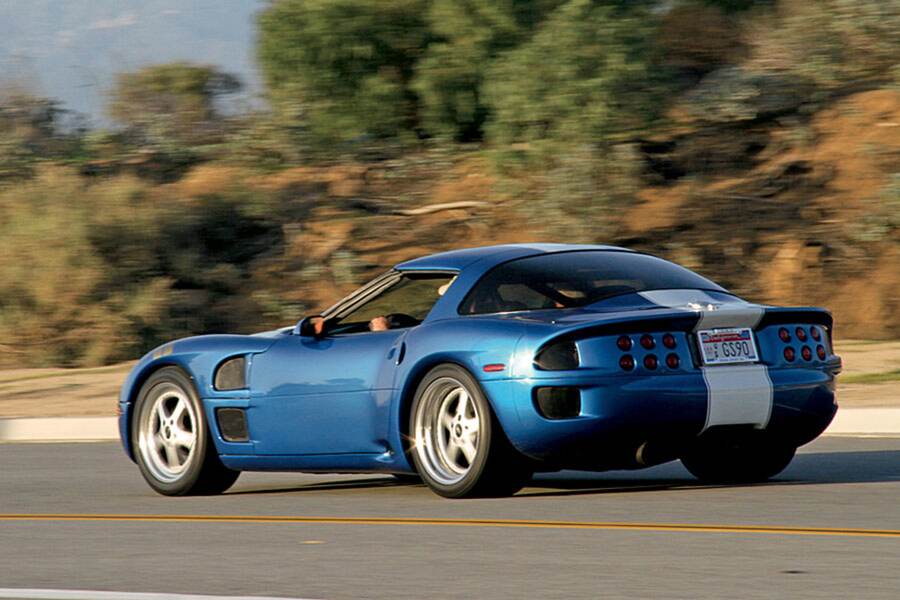 While Guldstrand was lining up investors to fund the GS90 project, his concept of a lean, mean, green, performance machine caught on with the automotive press. That’s how Detlef Stevenson, then the head of the Southern California Gas Company, got wind of the project. Stevenson had been promoting the idea of replacing gasoline with natural gas for some time, and saw Guldstrand’s project as an entré into the automotive field. Stevenson already had his own multi-million-dollar project started with the idea of developing natural gas as an automotive fuel, so he contacted Guldstrand; after a rather lengthy meeting, they determined that they could work together to produce the GS90 prototype. Stevenson became so enamored of the project that he quit the gas company and became a partner in the new enterprise: Guldstrand Specialty Automobiles. Winter became a partner, too.

An LT5 engine was obtained from Chevrolet and Guldstrand got to work on converting it to natural gas and increasing its output. “We did a minor increase in compression, but most of the work was done on the heads and enlarging the dual injectors,” he says. What Guldstrand and his associates created was a clean-burning quad-cam V8 with 429 horsepower.

To contain enough compressed natural gas (CNG), a large, heavy fuel tank was needed. Preliminary design work was done to deploy multiple sausage-shaped tanks in the frame, but it would have taken a lot of volume to provide enough fuel for such a powerful engine. However, the biggest problem was that there was very little infrastructure in the country to conveniently provide fuel for such car. 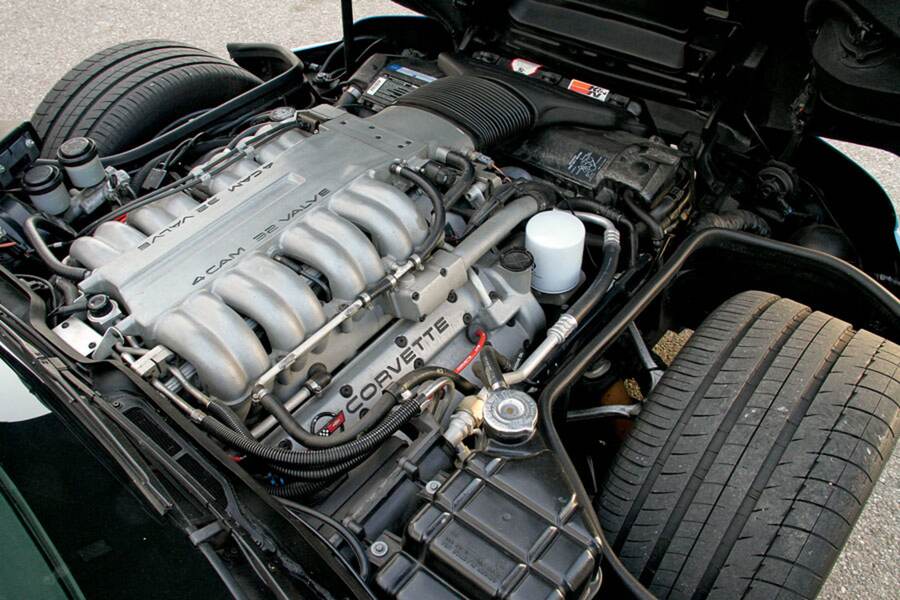 While everybody loved the idea of a CNG-fueled custom Corvette, nobody really wanted the car, so Guldstrand Specialty Automobiles was forced to abandon the alternative path and go down a more time-honored one. It turned to Doug Rippie to develop a high-output gasoline-fueled version of the LT5. He came up with a package of mods that resulted in 475 hp—a figure Guldstrand thought potential customers would find enticing, as it was 70 hp higher than a stock ’93 LT5’s.

The last piece of the puzzle was for Guldstrand to work his magic on the ZR-1’s suspension. He ditched the transverse-leaf springs and placed coil-overs at each corner, then replaced all the suspension bushings with needle bearings.

A GS90 buyer could supply his own 1993-95 ZR-1 and have it converted for $75,000 or buy a turnkey car for $135,000. The finished product was gorgeous, had fabulous performance and was built with the best components available, but this price tag was simply more than most buyers wanted to pay. As a result, only a handful of the cars were built. Some say the final tally was nine, including three roadsters dubbed Nassaus; other sources say more. Had demand been greater, increased production of the body panels could have brought the price down, but, as it was, the project was operating on minimal funding, and the cash stream ran dry before more cars could be built. 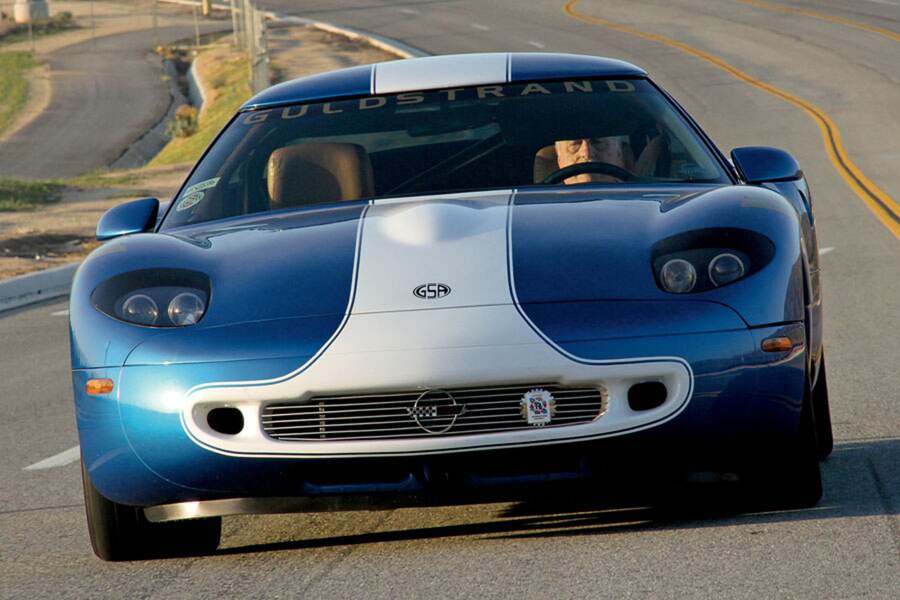 Charles Budenz had been tracking GS90s for years, and finally found our featured Electric Blue and Glacier White one in a warehouse in Southern California. Its owner had passed away, and the family finally agreed to let go of it. A price was negotiated, and Budenz drove it away. He then spent a year refreshing it and taking care of deferred maintenance.

Budenz tosses me the keys and we climb in. I am in familiar territory because the interior is stock ’95 ZR-1. It was left that way to keep the people at the National Highway Traffic Safety Administration happy. The bodywork attachment points were also unchanged for the same reason.

With a twist of the key, the LT5 booms to life and settles into an ominous idle. I push the ZF six-speed gearbox into first and get on the gas. The response is instantaneous and the acceleration is astonishing; there’s no waiting around for this V8’s 405 lb-ft of torque. The last time I remember experiencing such seat-slamming propulsion was when my crazy uncle Jan took me for a ride in his Chevy small block-powered Bugeye Sprite in the late 1960s. The quad-cam 32-valve V8 spins up to its 7,000-rpm redline without any drop off in power. The transmission is tight, precise and shifts smoothly. We are well beyond the legal limit with two more gears to explore, but I back off before getting anywhere near the car’s top end. Shortly after it debuted, Guldstrand took a GS90 up to a hair-raising 202 mph on a public road. However, I don’t relish the thought of being handcuffed, sitting on the curb and calling my wife to come get me…again. But that’s another story. 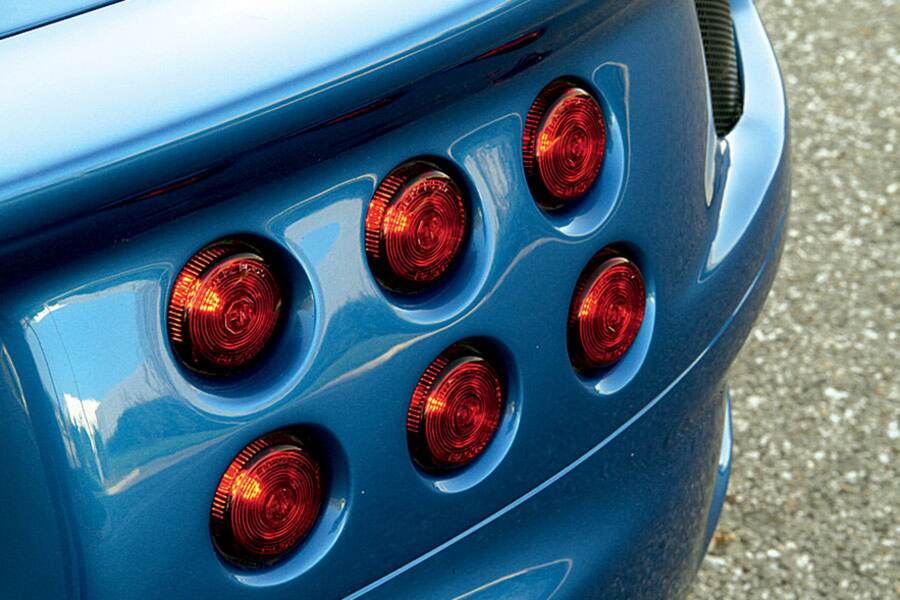 We head into the hills. The GS90 feels sure-footed. There is no body roll at all, and the back end seems a long way from breaking loose even during hard cornering, its big Michelin 325/30ZR18 rear tires providing tons of grip. The steering is light and quick, with just two and a half turns lock-to-lock.

I play around for a while longer, and then Budenz takes over the wheel and gives the GS90 a proper workout. The way the car blasts out of the corners is amazing; we’re back up to speed in a blink. I am on a crackling adrenaline high and loving every moment of it as we streak across the desert highway.

Eventually, we make it back to the museum. Budenz drops me off and waves good-bye. My last glimpse of his magnificent machine looks like a speeded-up film as he accelerates into the distance. I am a little wistful, because this work of automotive art is also one of the best Corvettes I’ve ever driven. It’s sad that so few of them were built. 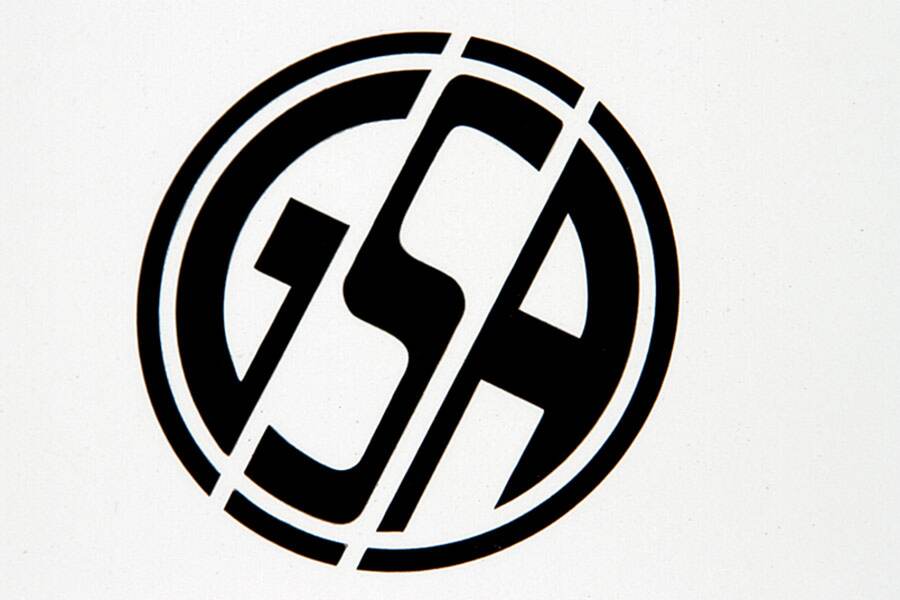 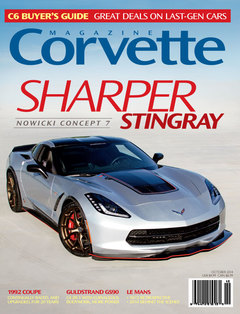