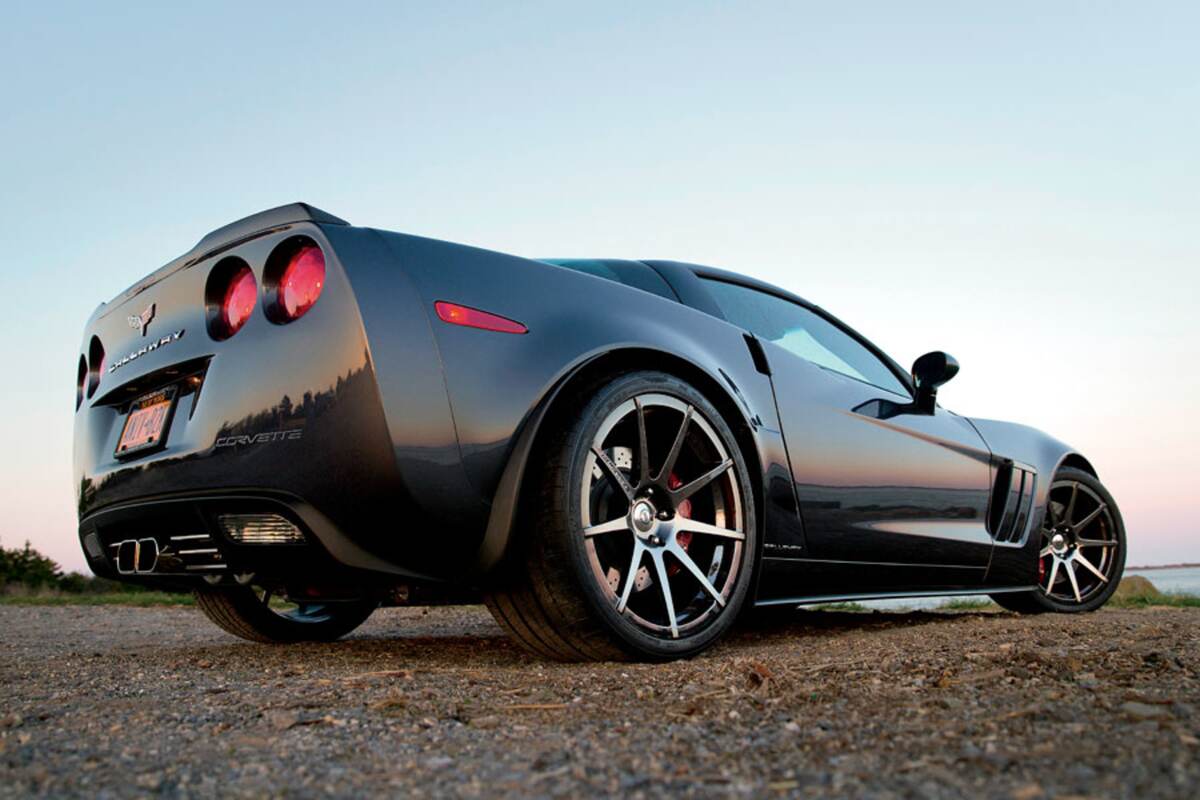 Callaway Cars’ unique relationship with Chevrolet began in 1987. It was then, and remains to this day, the only company whose Corvette performance modifications were codified into a regular production option package. By choosing option B2K, buyers got an extensively reworked, twin-turbo Corvette that delivered true supercar performance on par with the fastest cars from Ferrari, Porsche and Lamborghini. Between 1987 and 1991 a total of 510 of the legendary B2K Callaway Twin Turbo Corvettes were produced.

As the 25th anniversary of the B2K approached, Reeves Callaway began thinking of ways to celebrate the occasion. The company founder wisely concluded that the best way to mark this quarter-century milestone was to do it all over again, incorporating all that his company has learned in the intervening years into another B2K option package. The result was the building of 25 very special 25th Anniversary Limited Edition Callaway Corvettes.

Each 25th Anniversary Edition car began life as either a Grand Sport coupe or Grand Sport convertible, and the entire run of 25 cars was assembled in the Bowling Green Assembly Plant on April 5, 2012. Buyers could have any color they wanted as long as it was Cyber Gray Metallic. Convertibles were fitted with black cloth tops, while coupes got Carbon Flash-painted roof and halo panels. From Kentucky, these cars were shipped a thousand miles to Callaway’s facility in Old Lyme, Connecticut. 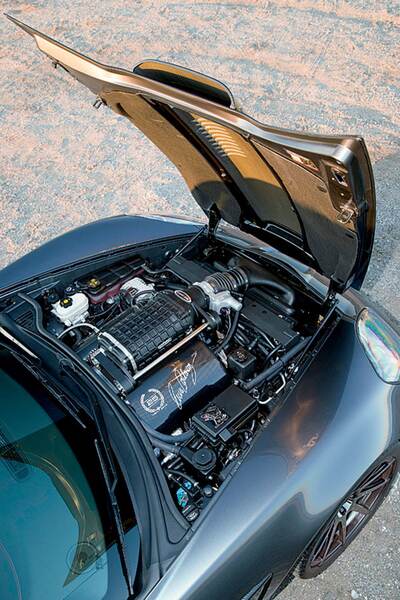 Once at Callaway, the bodies were modified with carbon-fiber parts manufactured using a proprietary epoxy resin infused/transfer-molded technique. A large, vented “power dome” bulge was incorporated into the hood to provide necessary clearance and cooling for the modified engine. High-speed handling and stability were enhanced courtesy of a carbon-fiber aero package, consisting of a front splitter, rocker-panel extensions and a rear spoiler. And just so there’s no mistaking exactly what the car is, all of the Corvettes were fitted with 25th Anniversary fender emblems and graphics etched on the windows, as well as an underhood build plaque with the car’s VIN and special B2K serial number.

Two of the 25 Callaway 25th Anniversary cars were ordered with a 3LT interior package while the remaining 23 got the full-boat 4LT kit. Callaway added floor mats embroidered with its logo, and leather, Alcantara and carbon-fiber trim to the steering wheel, airbag cover and center stack assembly. In addition, the shifter and emergency-brake handle were wrapped in Alcantara. The leather and Alcantara were stitched with red thread for 4LT interiors or black for 3LT interiors. Stock door-sill covers were replaced with new ones bearing the 25th Anniversary designation, and a plaque with the car’s B2K serial number was affixed to the bottom of the center stack. 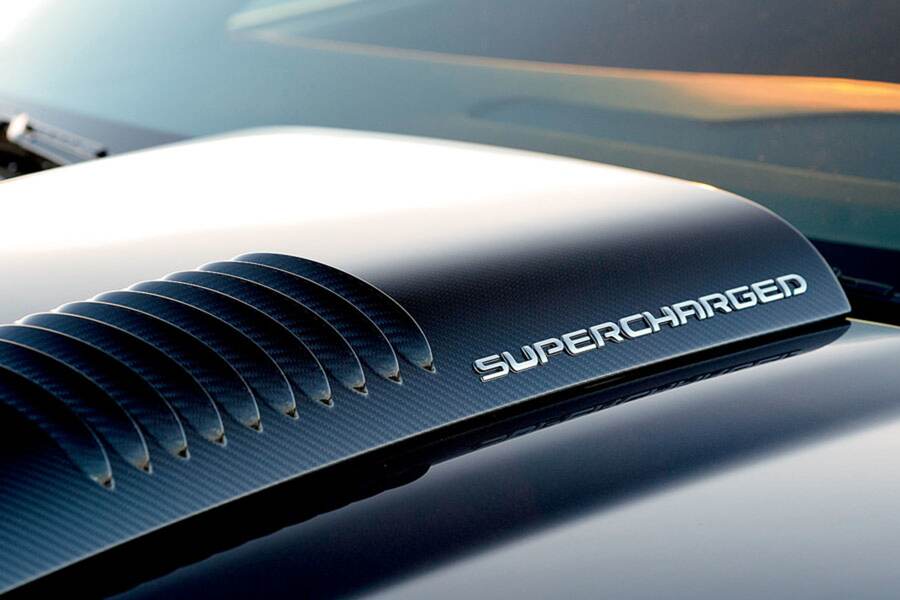 The stock C6 Corvette chassis leaves little room for improvement, at least with a street-going car, but that didn’t stop Reeve’s boys from sprinkling a little Callaway pixie dust on it. They drew upon their extensive experience testing and racing at the Nürburgring to develop very finely tuned damper assemblies in conjunction with Bilstein. Manufactured in Germany, the dampers were precisely matched in sets of four and assigned specific serial numbers for each car. Ride height was reduced by 20 mm and a 25 mm front-to-rear rake was established. Callaway’s stiffer front and rear anti-roll bars replaced the stock Chevy parts. Unique Callaway-designed rims were each carved from a single billet of forged aluminum. After plating with a liberal dose of black chrome, they were shod with either Michelin Pilot Sport PS2 ZP or Pilot Sport Cup tires, the latter being a no-extra-cost option. Either way, the fronts measure 285/30ZR19, the rears 335/25ZP20.

The 25th Anniversary Corvette was not for the weak of wallet: The B2K option package cost $52,980. (It was $19,995 in 1987.) Add in the price of a $56,900 Grand Sport coupe, and the car came in at $109,880, just about $3K shy of the C6 range-topping ZR1. Even so, within 20 minutes of Callaway opening up the order line for its authorized dealers, more than half of the cars were spoken for, and by day’s end all 25 were gone. At least some of the dealers who ordered an Anniversary B2K Corvette did so without a specific retail buyer in hand. We know this because six were still available in February 2013 when renowned Callaway collector Tony Cardiello decided to buy one.

I saw an Anniversary car on display at Carlisle in August 2012,” explains Cardiello, “and thought it would be a perfect complement to my 1987 B2K Corvette. It would complete the circle, so to speak.” After calling Callaway, Cardiello learned there was a coupe available at a nearby Connecticut dealership, but when he spoke with a salesman there he didn’t like what he heard. “He was rather condescending and that turned me off, so I called the next closest dealer with a coupe, which happened to be George Matick Chevrolet in Redford, Michigan. They were extremely knowledgeable about Callaway cars and could not have been more helpful. 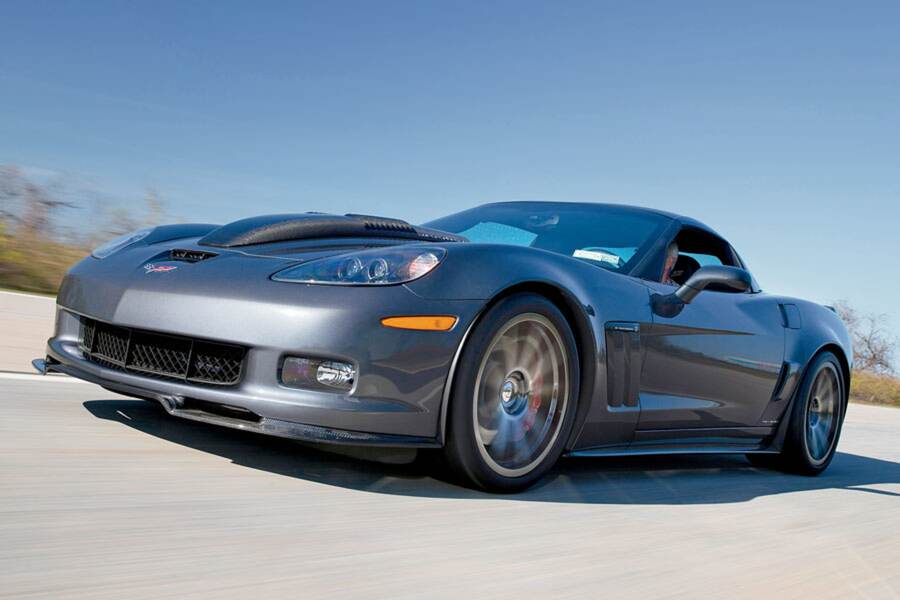 “Matick Chevrolet also happened to have a Cyber Gray ZR1 in stock when I called, and the salesman pointed out that it was about $10,000 less than the 25th Anniversary B2K, just so I would be sure that I did what was right for me. The ZR1 was tempting but I wanted to round out my Callaway collection, so in the end my decision was easy.”

The fact that the car was in Michigan, nearly 700 miles away, didn’t make a difference to Cardiello: “The car was new, and knowing the extremely high standard that Callaway builds cars to, in combination with the trust I had in the dealership, I didn’t need to go and see the car. We made the deal over the phone, they shipped it to me and I was 100-percent satisfied when it arrived.”

As with most of the Anniversary cars, Cardiello’s was built with the 4LT interior. It is one of 17 fitted with a manual transmission, and gear changes are executed via an optional, short-throw shifter. And surprisingly, it’s the only B2K ordered with the optional Michelin Pilot Sport Cup tires. 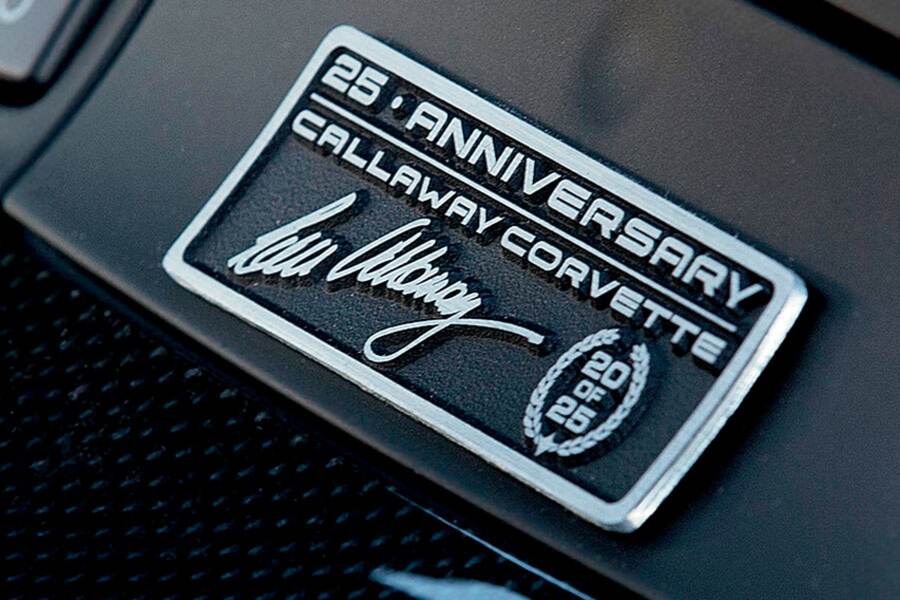 Cardiello hasn’t pushed his car to its limits but does acknowledge driving it well north of 100 mph “without any idea of how fast I was actually going because it was so stable and quiet.” Though Cardiello hasn’t put his car on a drag strip, its quarter mile prowess was measured by the maker. Using the pilot B2K, a coupe used to validate the option package that’s not included in the production tally of 25 cars, Callaway’s test driver clicked off a best run of 10.87 seconds at 128 mph at Atco Raceway. Though it did not publish a top-speed specification, Callaway tells us that the car will top 205 mph if given enough room to stretch its legs to the fullest.

Your author’s tryst behind the wheel did not shatter any records—by virtue of deep deception and dumb luck my driving record remains spotless, and I am determined to keep it that way—but did yield a good feel for what this car is all about. During hard cornering there’s perceptibly less body roll than a standard GS offers up, presumably due to the stiffer Callaway anti-roll bars. Despite the added stiffness, however, the tires never gave up any contact with the road, even on pavement ravaged by the most hideous winter in a generation. With fewer than 1,000 easy miles on the clock, the Pilot Sport Cups are reasonably quiet and deliver fantastic grip. As far as acceleration is concerned, there is supreme linearity between throttle input and the engine’s reaction, with great rushes of power thrusting the car forward with impressive force. In that regard, it feels essentially identical to a ZR1.

All in all, the 25th Anniversary B2K does both Chevrolet and Callaway proud. The unique exterior parts, interior trim and special badging establish this car’s credentials without being ostentatious. And in keeping with Callaway tradition, its performance is right at the pointy end of things, exactly where we’d expect it to be. 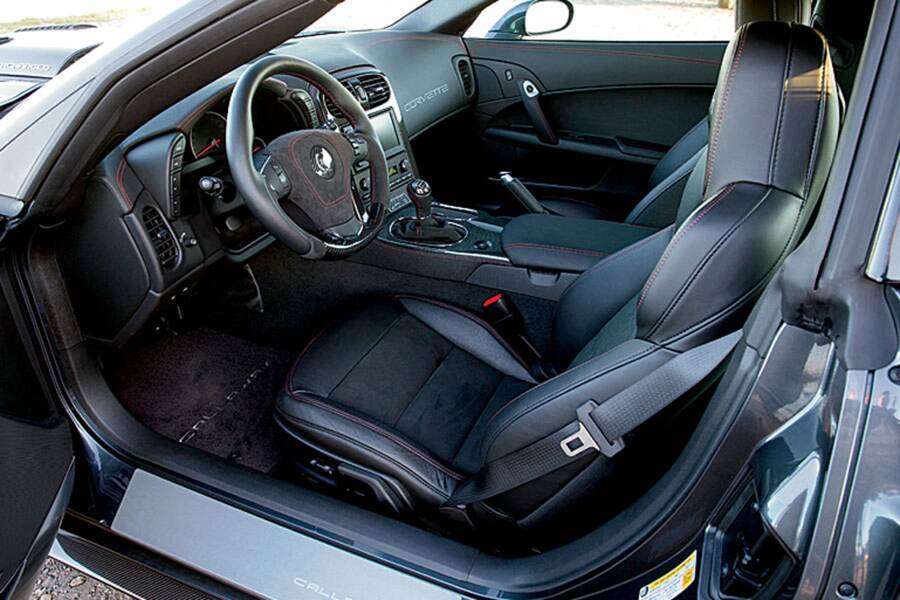 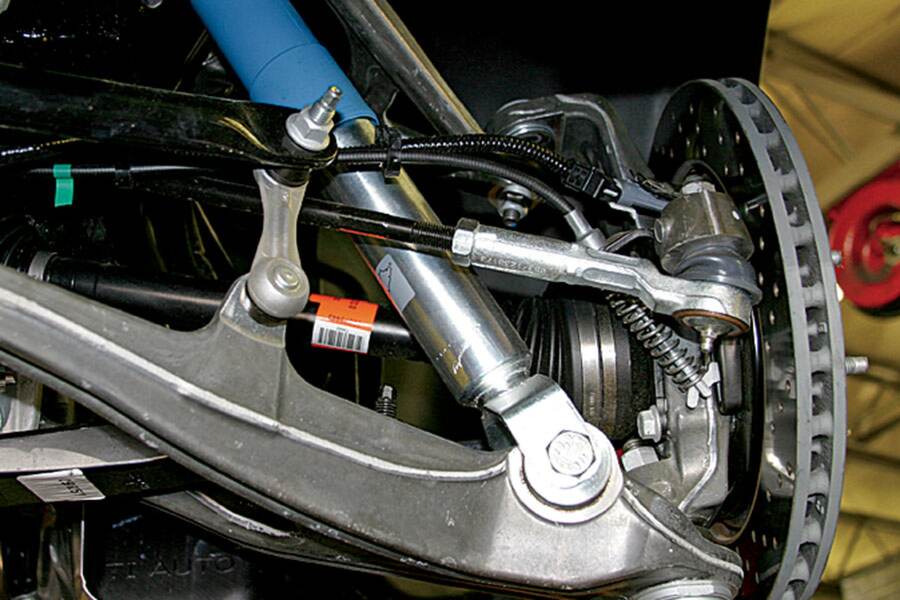 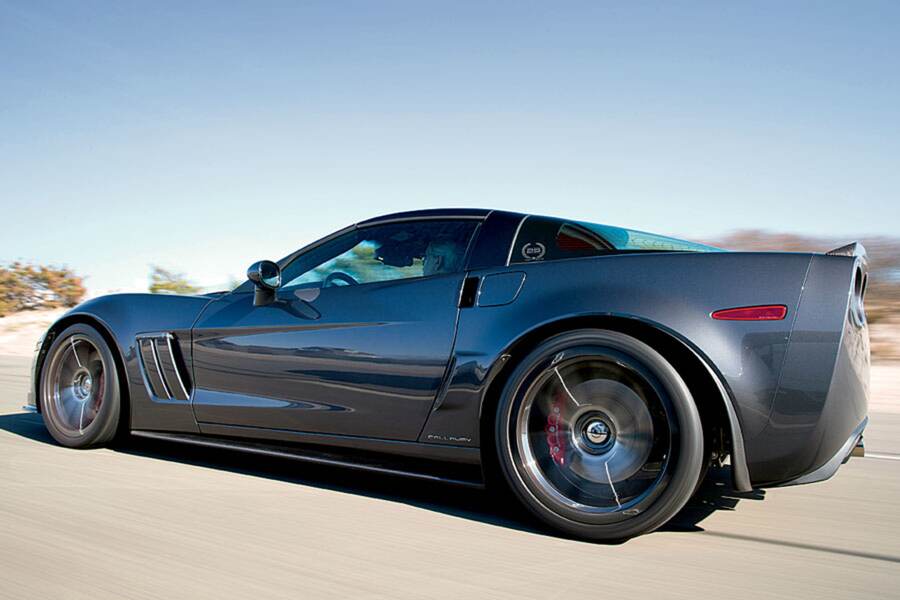 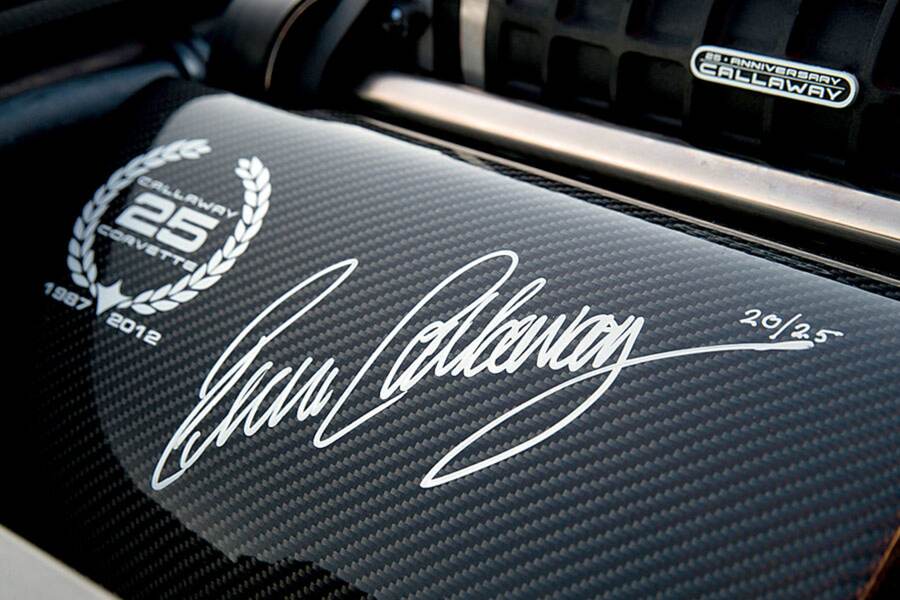 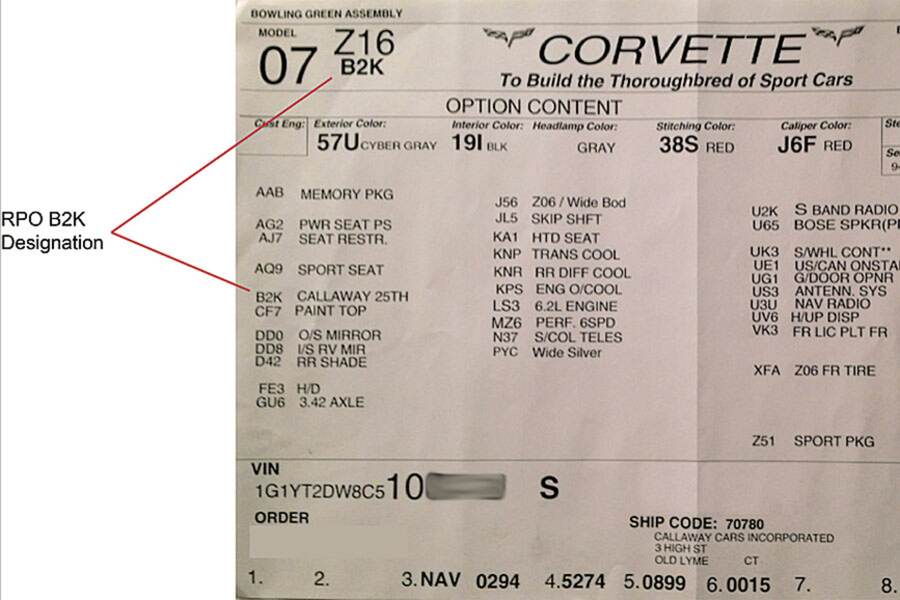 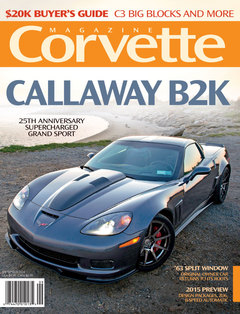