With 881 normally aspirated horsepower, this ’07 Z06 not only recalls the performance of mid-’70s Corvette race cars, it surpasses them. 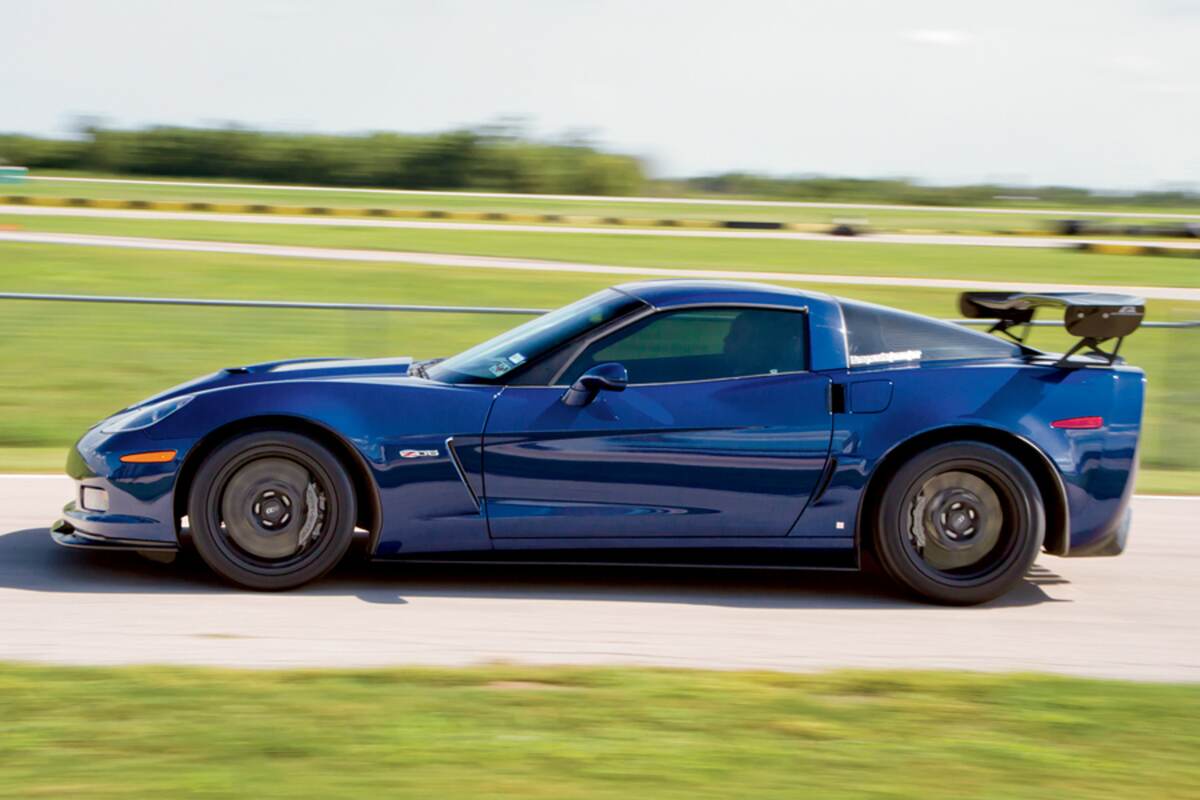 Back in the mid-1970s, the hottest Corvettes on the racetrack were built by John Greenwood. No one besides Porsche really understood turbos at that point, so Greenwood turned to displacement to increase engine output. He punched out the factory 454 big-block V8 to a monstrous 467 cubic inches and fabricated his own mechanical fuel-injection system. The combination resulted in a then-stratospheric 700 horsepower. Festooned with big spoilers and massive fender flares, these Greenwood machines were fast—as in 220 mph at Le Mans—but fragile, teetering on the bleeding edge of available technology. The modified 2007 Z06 on these pages also forgoes forced induction, but it not only produces more power than the Greenwood racers of yore, it does so while remaining street legal. Now that’s progress.

Interestingly, subsequent road-racing Corvettes have yet to reach the output peak achieved by Greenwood. When Chevrolet took the fourth-generation Corvette racing, it went down the “showroom stock” route. It wanted to prove who made the fastest street cars, which it did, chasing away the competition and forcing the creation of the one-make Corvette Challenge series. Still, the cars’ 350-cid engines only developed 245 horsepower, a huge drop from 700.

When Chevy decided to unleash the C5 on the racing 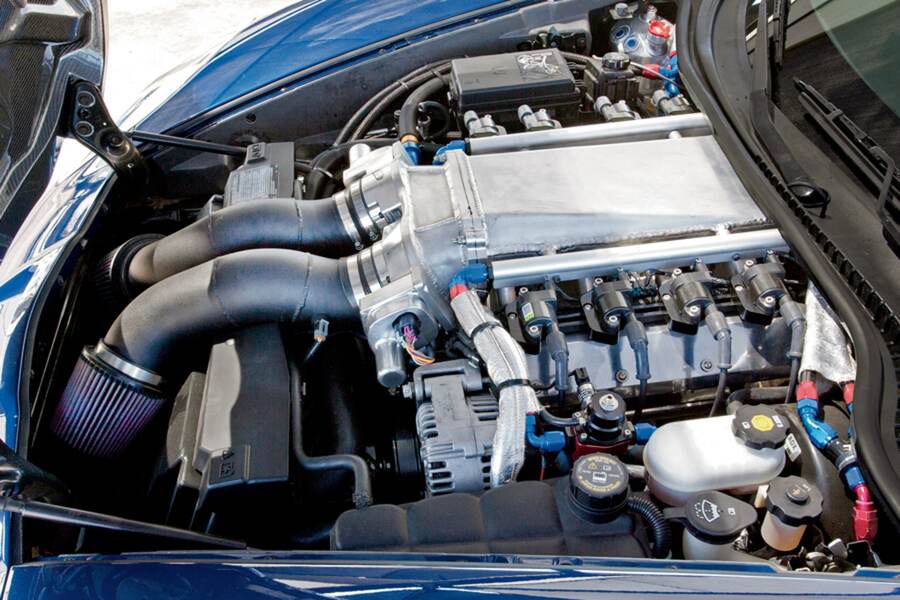 When Chevy decided to unleash the C5 on the racing world, its emphasis had changed from purely stock to purpose-built. But the road-racing sanctioning bodies had come up with engine regulations designed to equalize competition between a wide range of sports cars. As a result, the 427-cid V8s in the factory C5-Rs were limited to roughly 600 horsepower. When Corvette Racing switched classes in 2009, it was forced to throttle back to a 336-cid V8 with less than 500 ponies.

So what would it take for a Corvette race car to match or exceed those magic power levels of the ’70s? Well, it would take a form of track driving where there are no regulations to get in the way. During the late ’90s, as street cars got faster, many owners began looking for a place to enjoy all that performance in a safer environment, thus giving

rise to the “track day” phenomena. Organizations sprung up around the world to provide access to circuits. Though not racing per se—passing, for example, is often limited—the driving can nevertheless be competitive. Cars are inspected for safety compliance, but performance modifications are, for the most part, wide open. You can run what ya brung. 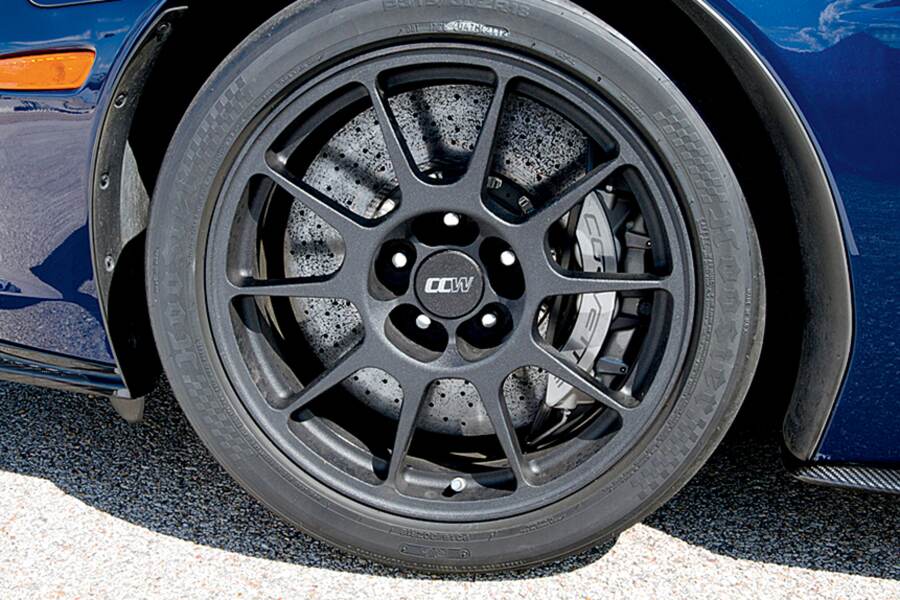 That’s exactly what Pierce Marshall does. He bought his ’07 Z06 new and it remains street legal, but over the years the car has been transformed into a dedicated track-day car with Greenwood-rivaling performance. Marshall started with the chassis, taking the car to ADM Performance to have Pfadt sway bars, bushings and coil-over shocks fitted. In addition, ADM swapped the stock Z06 brakes to ZR1-spec carbon-ceramic units. With 15.5- front and 15-inch rear rotors, these brakes haul the blue missile down from high speeds with no fuss. For maximum stick on twisty circuits, Marshall went with Hoosier A6 racing rubber (315/30-18 front, 345/35-18 rear) mounted on forged CCW C10 wheels (11 × 18-inch front, 13 × 18-in rear).

While it was at ADM, the Z06 was also treated to a ZR1 twin-disc clutch, flywheel and pressure plate. Its transmission was upgraded with ZR1 hardened gears from RPM and a Pfadt carbon-fiber driveshaft. ADM also addressed the car’s aero needs with a ZR1 carbon-fiber front splitter and side skirts, as well as an APR Performance GTC adjustable carbon-fiber rear wing.

When it came time to build his dream engine, Marshall turned to Late Model Racecraft in Houston. This was to be no mere LS7 tune, but a full-scale reimagining of the LS-series small block—an engine that would push the boundaries of what’s possible with normal aspiration. The V8 features a Racing Head Service 4.155-inch aluminum race block and a Callies DragonSlayer 4.125-inch nitrided crank, which results in a whopping 445 inches of displacement. Callies Ultra Billet H-Beam 6.125-inch rods spin Wiseco 22-cc dish 12:1 slugs with lateral gas ports and anti-friction coating on their skirts. To keep everything lubed in long, hard sweeping turns, an Armstrong Race Engines LS7-style dry-sump system with a 12-quart tank was added under the hood. 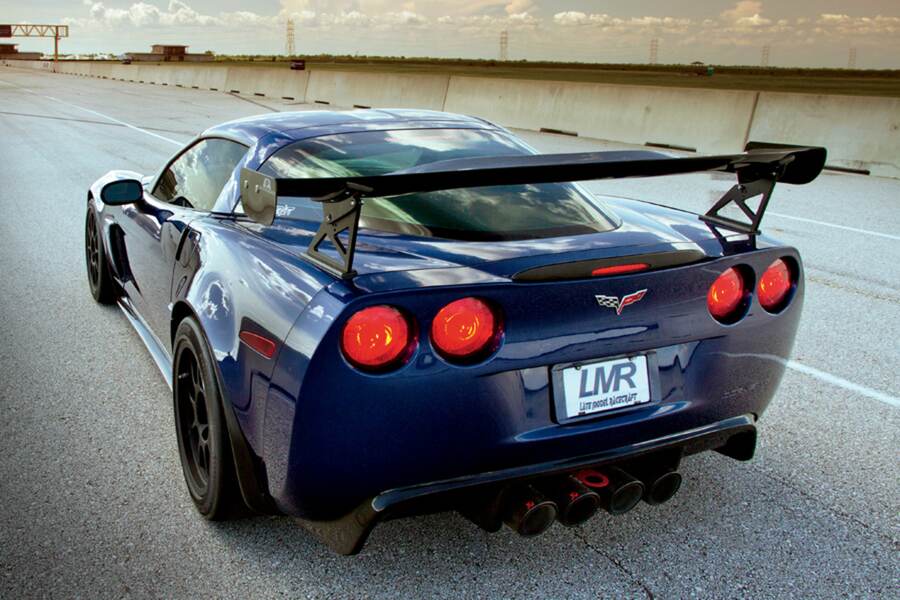 GM Performance Parts LSX-DR (for drag racing) aluminum racing heads were chosen to top this proven block combo. The DR heads are based on the potent C5-R heads developed for racing Corvettes, but are altered to allow better breathing on larger-displacement engines than were allowed with the Corvette program. The DR heads are optimized for normally aspirated engines and feature small 50-cc combustion chambers that are ideal for high compression ratios. They were treated to Ferrea 2.250/1.625-inch valves (stainless exhaust, titanium intake), Manley Nextek springs and T&D shaft-mount rockers. A custom Late Model Engines solid roller cam was designed to deliver a wide power band. American Racing Headers long-tube stainless-steel headers with 2-inch primaries and 3-inch collectors dump into an Akrapovic titanium exhaust system. These high-end Slovenia-built units are about 40-percent lighter than a stainless-steel version.

Topping everything off is a custom TRE Race Engines sheet-metal intake manifold, modified by LMR to mount twin 102-mm drive-by-wire Nick Williams throttle bodies controlled by a ProEFI Pro128 ECU engine-management system. At the end of the day, this monster motor cranks out 881 horsepower at the flywheel—nearly 200 ponies more than those Greenwood V8s.

Marshall loves his new toy and delights in the instant throttle response that normally aspirated cars have in spades. His Z06 is lightning quick, handles like a rat in tennis shoes and lets Marshall experience Corvette muscle at a level unknown in road-racing circles for nearly four decades. 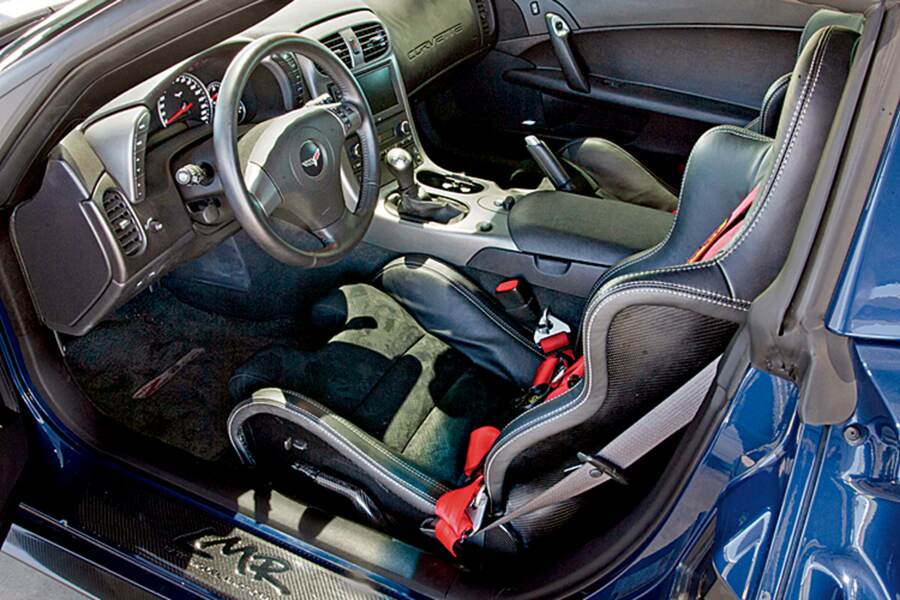 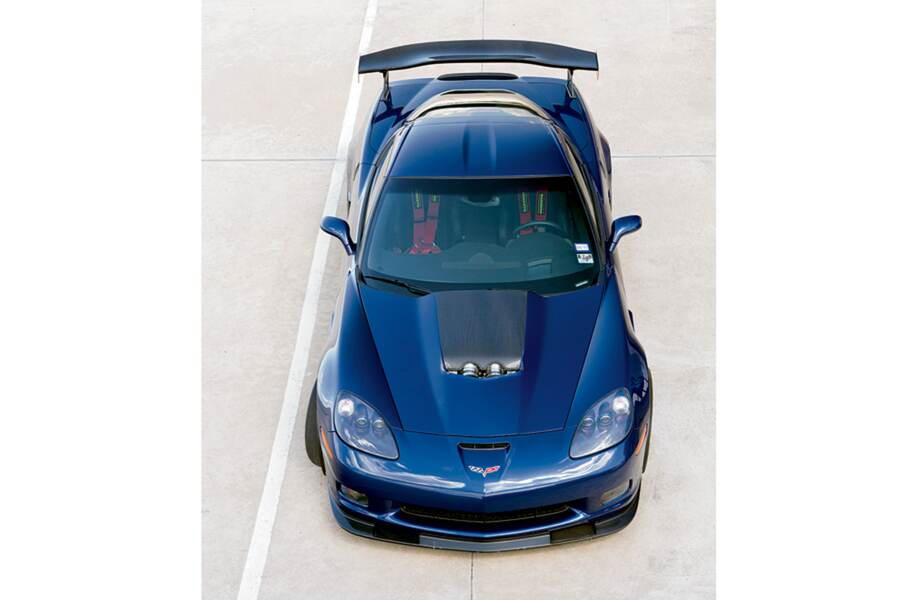 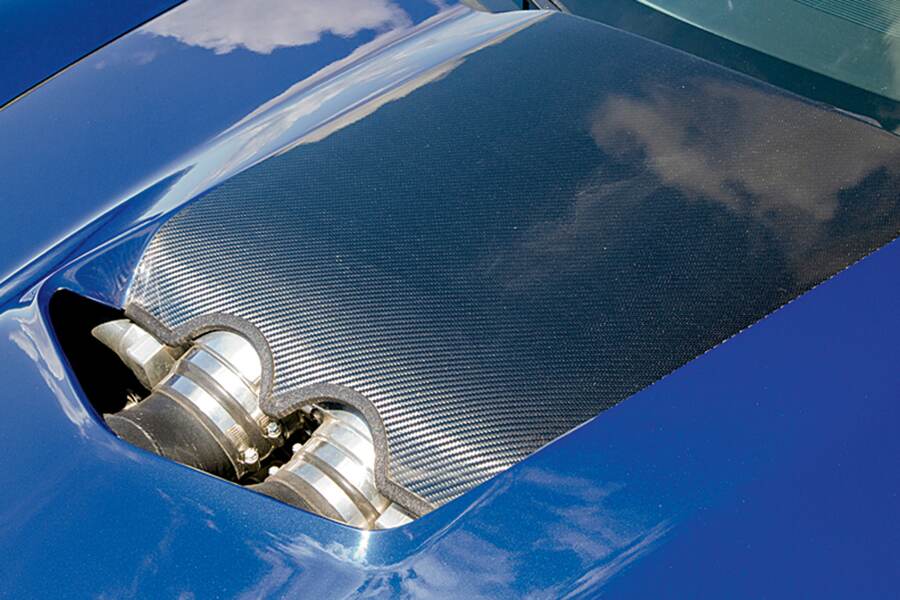 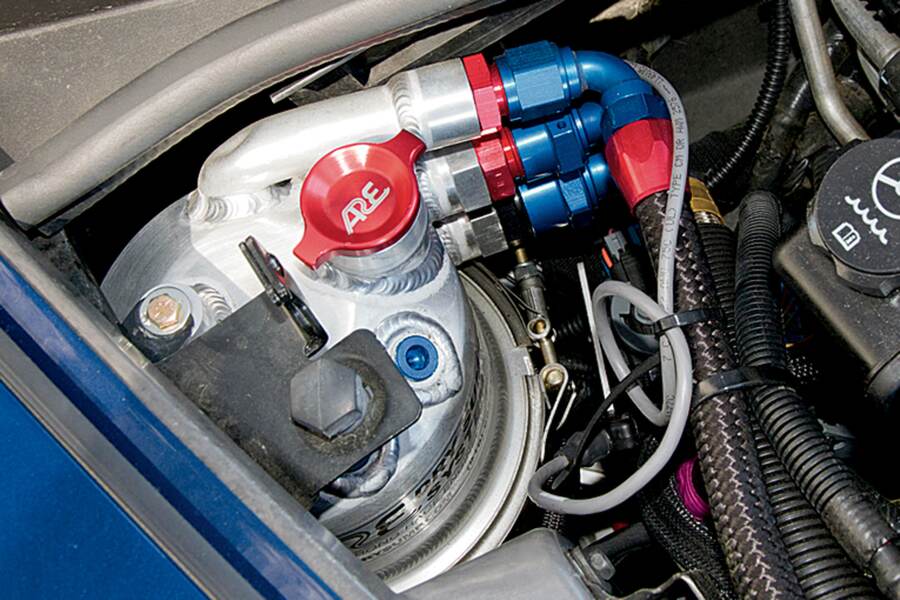 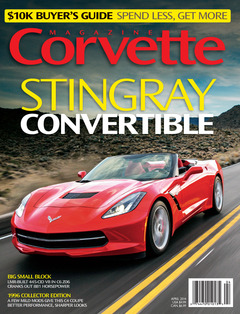