A 700-horsepower C2 restomod proves the perfect cure for a Viper affliction. 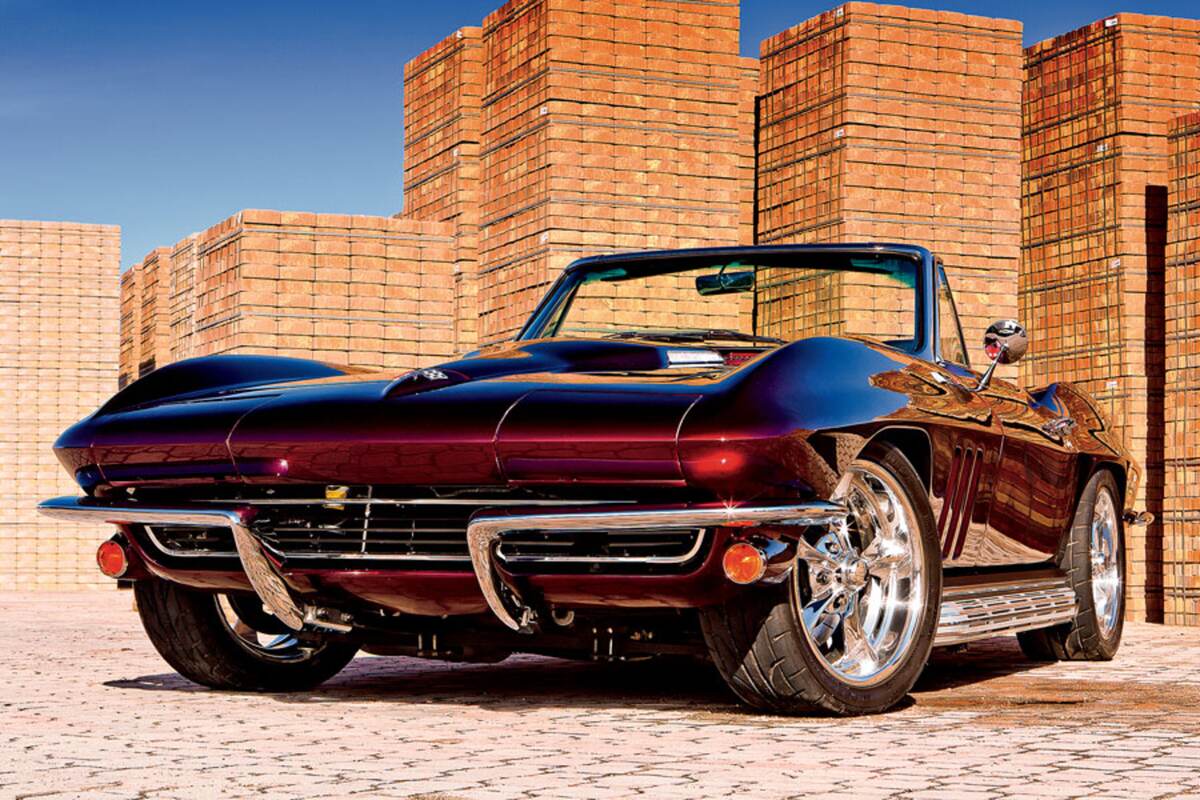 There is no denying that eBay has had a profound impact on the way individuals buy or sell collector cars and replacement parts. The ease with which you can find most items on the online auction site has simplified the entire hunting, purchasing and selling process for many enthusiasts. There are, however, instances when you have something very specific in mind that a simple eBay search will not immediately locate. This was certainly the case with Floridian Tony Gomez. When his quest for a mid-year started, he turned to eBay with a short and well-defined checklist. “For me, C2 Corvettes are the most classic-looking body style,” he explains. “I focused specifically on getting a ’65 as it’s the year I was born, and also the first year of the big-block engine.” Beyond wanting a ’65, he was also interested in a car that was “worn out.” He wasn’t looking to embark on a nut-and-bolt restoration; he wanted a complete car to rebuild to his own tastes. “I searched daily for about six months everywhere I could,” he says. “EBay had the best selection of cars in the worn-out condition I was looking for.”

Eventually, a very tired ’65 showed up on the auction site. It was a numbers-matching 327/350-horse, four-speed convertible with over 300,000 miles on the odometer. It was just the Corvette Gomez was looking for, and, as an added bonus, it was located in his backyard, so to speak—Key Largo, Florida. “It had a no-hit body, and the original engine and transmission,” Gomez happily recalls. “I was able to drive it home. It rattled, smoked and didn’t stop so well. Plus, the transmission couldn’t be downshifted, but the attraction of the car was that it was all there. Exactly the starting point I was looking for.”

For Gomez, this wasn’t his first experience with a Corvette. The bow-tie passion had ignited at an early age. “I purchased my first Corvette as a teenager,” he recounts. “It was a ’68 coupe I found in someone’s front yard. It was weathered and sitting on two flat tires. Working on a teenager’s budget, I got it running and driving in no time. In that car, I won the Florida Autocross Championship in 1988. I sold it when my son was born in order to fund a more family-oriented vehicle—in other words, a minivan.” 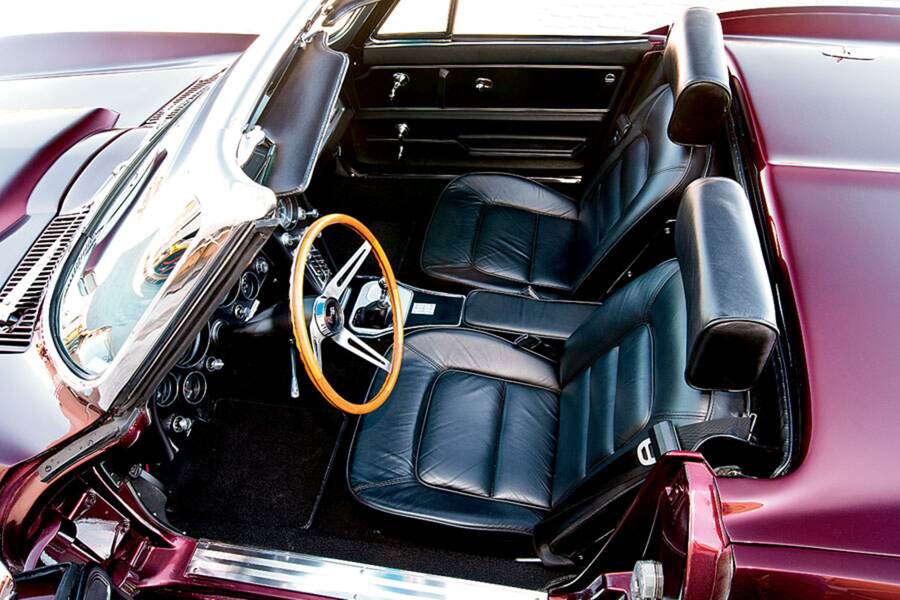 Eventually, the family hauler gave way to something with a few more ponies under the hood. While the Stingray was his first love, Gomez ended up being charmed by a snake. “I was an avid Dodge Viper enthusiast,” he admits. “I owned a 1995 Roadster, a 2000 ACR and a 2003 SRT10. They were my daily drivers spanning 15 years. With the ACR, I ran in the inaugural year of the Viper Challenge road-racing series and finished third in the nation.”

Although Gomez enjoyed the visceral experience of driving Vipers, the appeal of Corvettes still lingered. The Vipers were also off-the-showroom-floor purchases, and did not have his own personal stamp. “I started the project with a clean sheet of paper,” he outlines. “The end goal was having something even better-looking, more powerful and faster than the best car I’ve ever owned.” Having been spoiled with the fat power curve of the Viper’s V10, the C2’s engine would have to match or surpass it.

For Gomez, the most defining feature in a car is the engine, and the idea of a massive aluminum V8 with gobs of horsepower was appealing. “I remember being a young boy looking at a car magazine that featured a ’69 Corvette with the all-aluminum ZL1 V8,” he recalls. “To this day, I remember going, ‘Whoa, that’s a huge engine that weighs about as much as a small one.’ The concept was simple, but impressive, even to a kid.” He also wanted the engine to be “old school,” which for him meant that it would be naturally aspirated, fit under the stock hood, be relatively quiet, be built with parts manufactured in the U.S. and run on pump gas. 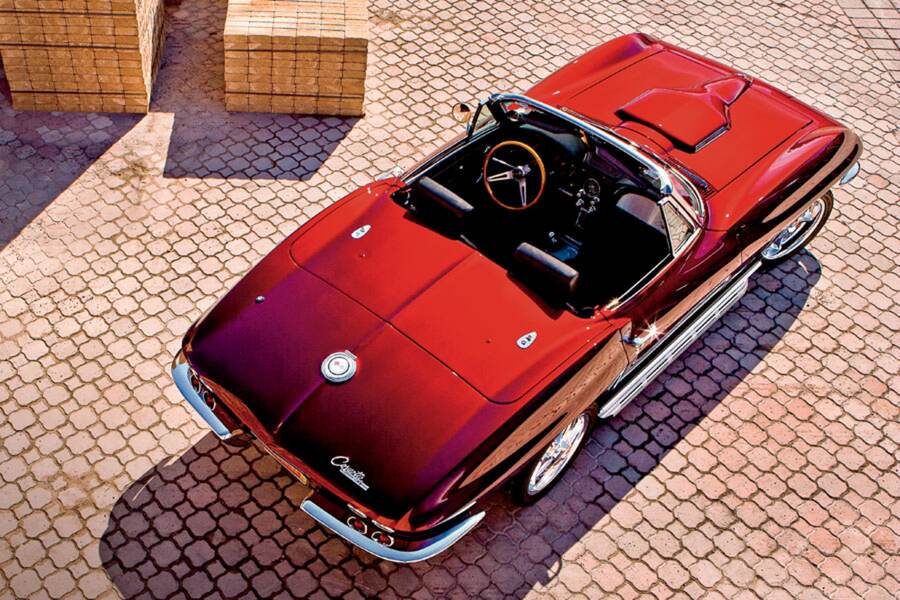 Another significant aspect of the project was that it wasn’t going to be a “cut a check” deal; Gomez wanted to do as much of the work as possible with his own two hands. Having worked at a garage during his high school and college years, turning a wrench was something that Gomez was intimately familiar with, and something he looked forward to. The Corvette was wheeled into his two-car garage, and there it would stay for most of the next two-plus years undergoing its transformation.

The first order of business was to disassemble the Corvette. Since this was a matching-numbers car, the original engine and gearbox were removed and placed in storage, just in case Gomez ever changed his mind about going down the restomod path. The next task, before anything else could realistically be done, was to remove the factory undercoating. That process took him a few weeks on his back using plastic scrapers, wire brushes and lots of expletives. Despite so many miles, the undercoating had done a remarkably good job of preserving the underside of the car. The next task was to strip the frame down to bare metal. Once this was completed, Gomez welded in additional structural elements to key points of the chassis—after all, it was going to be tasked with handling significantly more power than it was originally designed for. 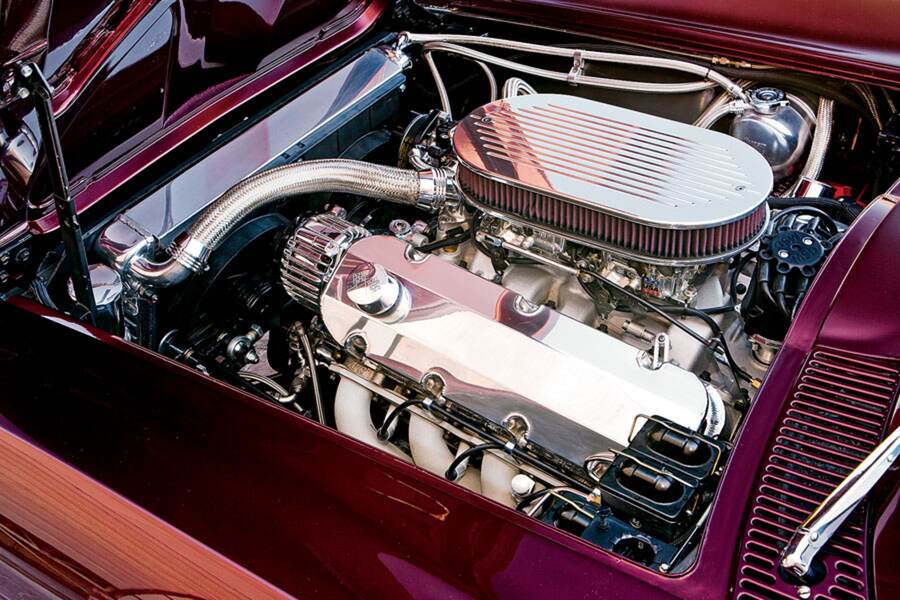 The original brakes joined the engine and transmission in storage. In their place, Gomez added a complete Wilwood racing system, which consists of 6-piston front and 4-piston rear calipers clamping down on slotted rotors. From the Wilwood catalog he also sourced fully adjustable dual master cylinders.

With big power output as the number-one goal from the outset, the need for a heavy-duty rear-end assembly was never in doubt. Gomez installed a Tom’s Differentials Stage 7 limited-slip carrier stuffed with Richmond 3.55:1 gears, as well as 1350-series 3.5-inch half-shafts and forged fine-spline steel axles.

As for the transmission, Gomez selected a Kiesler Engineering TKO 600 5-speed gearbox as a starting point. To increase torque capacity, he had the internal gear sets cryogenically treated. The addition of carbon-fiber syncro blockers and the installation of a dual ceramic clutch with a hydraulic-actuation system would help on that score, too. 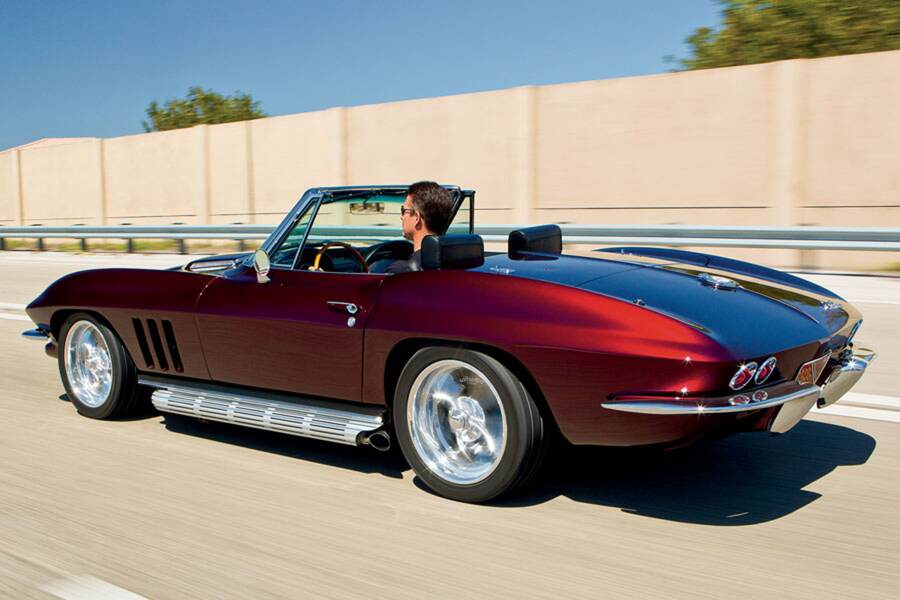 With the frame, suspension and drivetrain sorted out, propulsion was the next item on Gomez’s plate. He went big, as in 515 cubic inches big, selecting an aluminum block from Donovan Engineering, which earned its reputation building aluminum blocks for top-fuel dragsters in the ’60s. “Kathy Donovan still runs Donovan Engineering,” says Gomez. “She was kind enough to oversee the casting and delivery of this special project.” The block was designed around a 4.530-inch bore and a 4.0-inch stroke. Gomez began the V8 build by installing a Callies Dragonslayer forged crankshaft, Oliver Steel Billet connecting rods and JE ceramic-coated forged 10.4:1 pistons with Total Seal gapless rings.

While the beefy bottom end ensured the engine wouldn’t grenade itself, getting the V8 to generate lots of horsepower meant efficient fuel and air delivery. To that end, Gomez started with a set of Air Flow Research 315 CNC heads, Jesel Sportsman-series shaft-mounted aluminum rockers, nitrated beehive springs and hollow-stem valves. Actuating all of this is a hydraulic roller camshaft custom designed by Jones Engineering. Fuel delivery comes via a fully ported Edelbrock low-rise dual-quad intake crowned with a pair of Edelbrock 800-cfm AVS carbs. Gomez finished the assembly by installing a Billet Specialties Tru-Trac serpentine-belt system.

The last part of the horsepower equation was to efficiently and quietly discharge the spent gases. That task was accomplished with the installation of a set of ceramic-coated Stahl side-pipe headers. These flow into 4-inch Random Technology metal catalytic converters. From there, the decibels would be maintained at a respectable level with two 4-inch Magnaflow stainless-steel mufflers per side tucked behind a set of modified factory side-pipe covers. 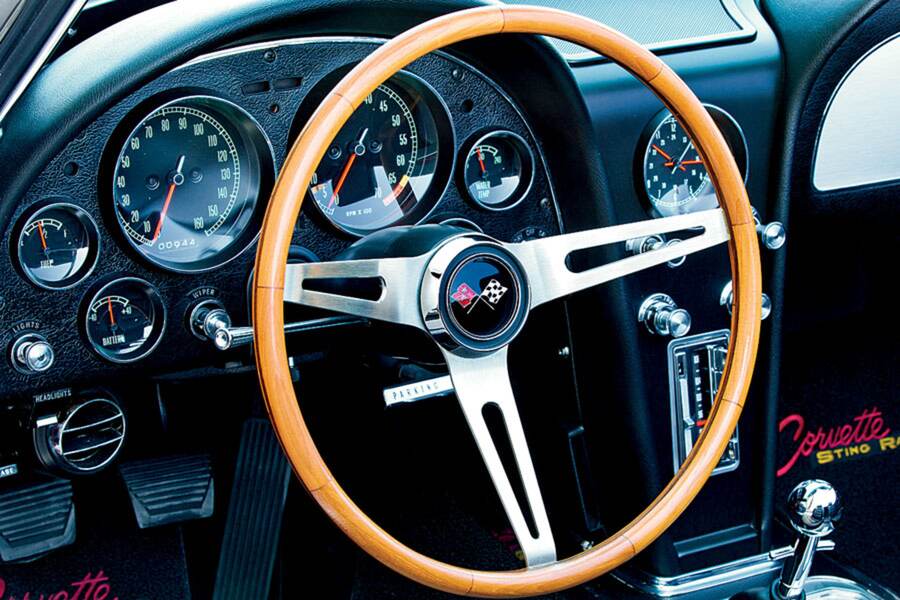 With the engine complete, Gomez shifted his focus to the tired fiberglass body. There was some apprehension on his part once he started peeling back the layers of paint. His fear was that something unpleasant would surface. Much to his relief, nothing did. After stripping all the paint off the body, he repaired any minor problems, including the usual stress cracks common in almost any vintage Corvette. Once that was complete, Gomez set out to massage the body to perfection. He applied multiple coats of high-build House of Kolor primer/surfacer that were then block-sanded by hand to eliminate surface imperfections. Once the body lines were aligned and the surfaces smooth and level, the next step was to apply the House of Kolor silver primer. This was the point where the project couldn’t progress any further at home.

For the final application of the top layers, Gomez was forced to rent a paint booth for one day. Continuing the use of House of Kolor products, and racing against the clock, he applied Galaxy Grey base coat, which was then followed by multiple coats of Brandywine Kandy Red Urethane, then Kosmic Urethane Show Klear.

With the freshly painted Corvette back in his garage, Gomez’s last major hurdle was dealing with the worn interior. His goal was to make it the best example of what was offered in ’65. Explains Gomez, “I embarked on a detailed factory restoration including leather seats, a fully restored instrument cluster, new replacement top, new carpet and a factory-correct teak reproduction steering wheel that is an inch smaller in diameter due to the addition of power steering.”

A few weeks after the completion of the project, Gomez wanted to see what kind of numbers he could get from the big V8. The dyno run yielded 559 horsepower at the rear wheels, which works out to 700 hp at the crank. While the dyno is a useful yardstick, there is nothing like a real-world flogging at a racetrack to determine a car’s true performance. This took place at Palm Beach International Raceway’s drag strip a few weeks after the dyno pulls. Gomez’s projection, or desire, was to run a mid-10-second quarter mile on street drag radials. After a few passes, he clocked a 10.864 run at 128.49 mph. “The launch and mid-range acceleration of this Corvette are like nothing I’ve ever felt,” Gomez explains. That run made two long years of work worthwhile and permanently cured him of his Viper problem.

Though Gomez built the car for his own personal fulfillment, he doesn’t mind that others, including show judges, appreciate the quality of his workmanship: The ’65 has received a number of “Best in Show” and “Best in Class” awards. As with any project that requires a huge investment of time, Gomez is most grateful for the understanding, encouragement and patience that his wife, Cheryl, gave to him during the many lost weekends in the garage. 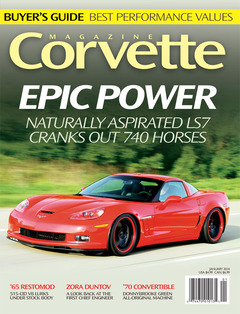