From 1987 to 1991, Chevrolet sold turbocharged Corvettes. It didn’t build the engines, however; that work was done by Callaway Cars. 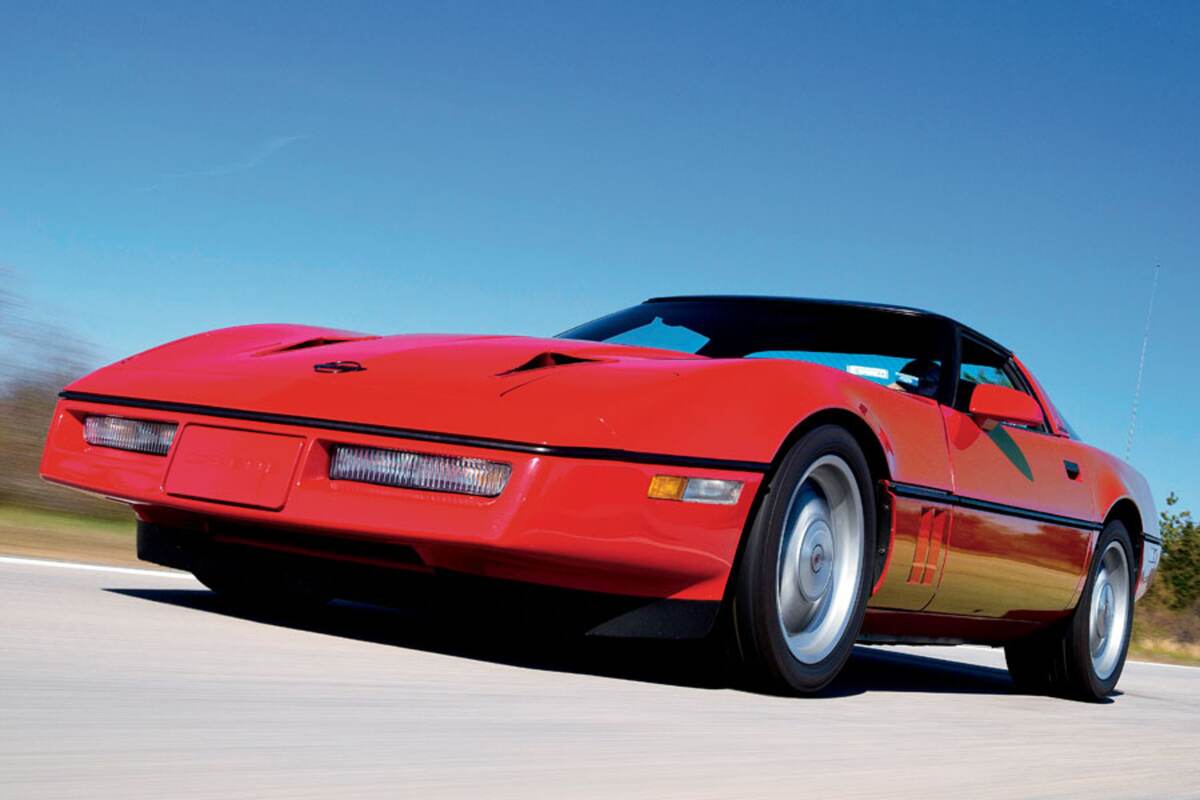 Up until 1970, powertrain engineers assigned to the Corvette could focus nearly all of their attention on finding ways to extract ever more power from Chevrolet’s engines—but with the passage of the Clean Air Act that year, those same engineers had to shift their focus to reducing emissions. Then the OPEC oil crisis of 1973 made gasoline consumption a national issue in the U.S. and the Energy Conservation Act of 1975 made reducing fuel consumption law. As a result, Corvette engine output dropped precipitously during this period.

Ever mindful of the decisive role that engine power plays in the Corvette’s appeal, and thus sales, Chevrolet pursued several technologies simultaneously in order to meet government-imposed emissions and economy requirements as well as customer expectations through the ’70s and ’80s. Those technologies included electronic fuel injection, turbocharging, multi-valve cylinder heads and multiple camshafts. When management eventually decided to bring a multi-valve head/multi-cam engine to production in the form of the C4 ZR-1’s LT5, it made a rather unusual decision concerning GM’s turbo research. Instead of simply putting it aside, as typically happens when a competing path wins out, GM instead struck a deal with Callaway Cars. The arrangement, orchestrated by Chevrolet Market Planning chief Don Runkle, entailed Chevrolet providing technological, logistical and financial support so that the Old Lyme, Connecticut specialty builder could keep moving the technology forward, with an eye on production viability.

Callaway was not the first outside company to help GM develop a turbocharged Corvette. In May 1983, Chevrolet contracted Troy, Michigan-based Specialized Vehicles Incorporated (SVI) to produce 16 Corvettes with prototype turbocharged engines. Because of packaging concerns, the plans initially called for SVI to produce a twin-turbo V6. Corvette Chief Engineer Dave McLellan and others with influence at Chevrolet, including the marketing department, were not particularly enthusiastic about installing a V6 into the Corvette, regardless of how much horsepower could be squeezed out of it. So, after Chevy learned that a twin-turbo V8 could fit in the C4’s engine compartment, SVI was asked to abandon the V6 and concentrate instead on a V8. It delivered a functional and reasonably well-sorted twin-turbo V8-powered Corvette to Chevrolet early in 1985. By August 1985, SVI fulfilled its contract with GM by delivering the last of 16 twin-turbo Corvettes for further testing. 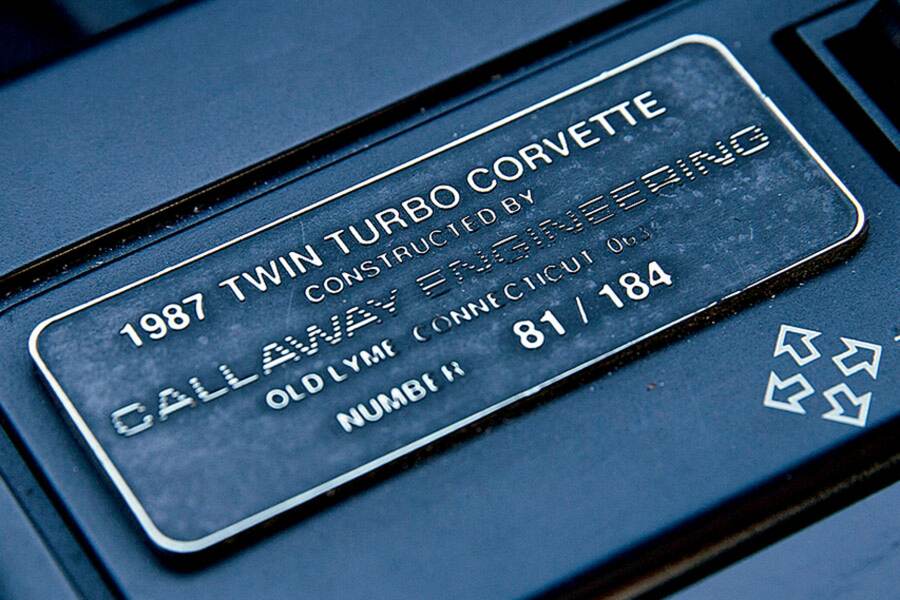 The twin-turbo Corvettes built by SVI were intended to eventually lead to production, but their primary purpose was to evaluate the feasibility of packaging a twin-turbo V8 in the existing Corvette and test its effects on the chassis. By contrast, Callaway’s expressly stated mandate was to develop a complete twin-turbo package that would pass all of GM’s validation tests while not impacting its existing emissions systems in any significant way.

The knowledge gained from Chevrolet’s collaboration with SVI, as well as one of the twin-turbo Corvettes the company created, was turned over to Callaway Cars in June 1985. Callaway was chosen to make the turbo package production-ready because the company had already demonstrated its ability to successfully design, fabricate and sell turbocharging systems—and, equally important, get through the onerous certification process required to bring low-volume production turbocharged cars to market. In 1983, Callaway had done so for Alfa Romeo, creating a twin-turbo V6 for the carmaker’s GTV coupe.

Even after all the work SVI and Chevrolet had done, Callaway still had to overcome several very difficult problems, including developing a viable fuel-injection system, packaging all of the extra hardware in the Corvette’s already cramped engine compartment and simultaneously meeting power targets and emissions requirements. Callaway quickly abandoned Chevrolet’s plans for a scaled fuel-injection system designed to deliver the extra fuel the turbochargers demanded while meeting the EPA’s stringent emission standards, and instead solved the riddle by leaving the regular production fuel-injection system untouched and adding a pair of additional Bosch fuel injectors ahead of the throttle. These two auxiliary injectors operated independently of the stock engine-management computer; they were directed by their own control system, using Callaway’s proprietary Microfueler II computer module. The Microfueler II delivered the necessary extra fuel when the turbo boost kicked in, but did not interfere with the stock fuel-injection system’s functions when the car was driven without boost. 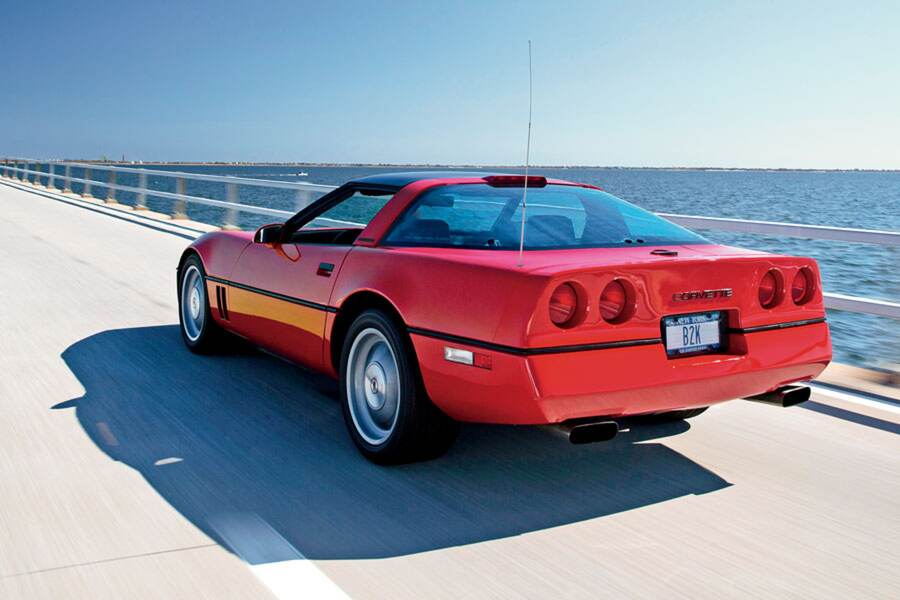 As far as packaging was concerned, Callaway took advantage of every bit of what little room there was under the Corvette’s hood. A compact IHI RHB52 turbo was mounted on either side of the engine toward the bottom, while twin air-to-air intercoolers were prominently located on top of the engine and fed cooling air by two large NACA ducts in the hood. It was an elegant solution to the packaging conundrum.

By not touching certain critical systems and components that directly impacted emissions, most notably the fuel-injection setup and camshaft design, the twin-turbo engine package was able to get through the EPA certification process under rules that did not require small specialty shops to completely recertify an engine that was already certified. This was another benefit realized by turning the turbo program over to a small manufacturer such as Callaway.

Callaway had a certified and production-ready twin-turbo Corvette up and running within a year. The turbocharged engine produced 345 horsepower and 465 lb-ft of torque. Careful sizing of the turbos helped deliver initial boost at just 1,100 rpm and full boost of 10 psi by 2,000 rpm. This created an incredibly broad torque curve that was at least 50-percent greater than the stock L98’s torque output across the entire rpm spectrum. This endowed the engine with incredible flexibility in addition to raw power. 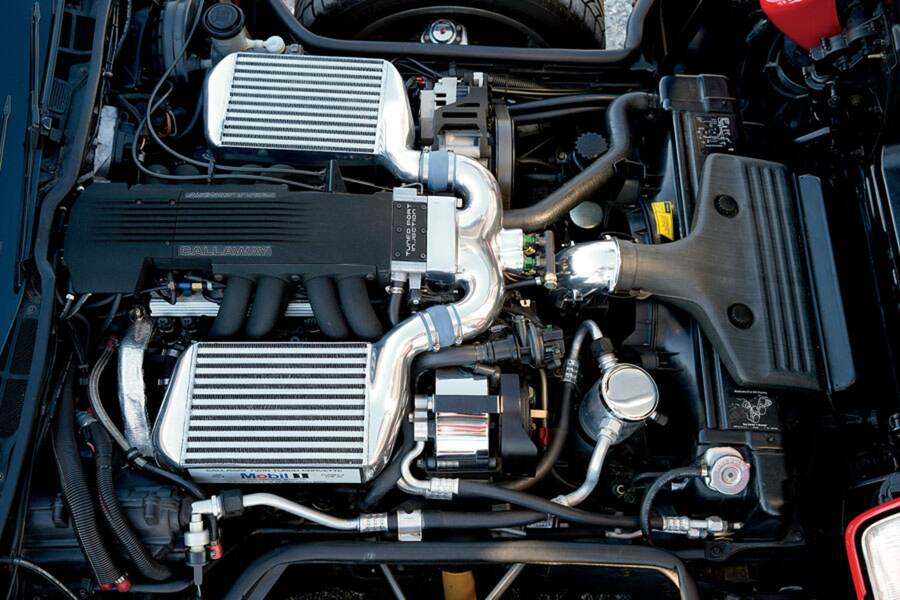 In a remarkable move on Chevrolet’s part, the twin-turbo package was given the Regular Production Option code B2K and could be ordered though a select group of authorized Chevrolet dealers. All B2K orders went down the regular assembly line in Bowling Green and were completely assembled with a normally aspirated engine. After completion, however, the cars were shipped to Old Lyme, Connecticut, where the twin-turbo engine installation, as well as the other Callaway-specific modifications, was carried out. Though it was obviously redundant to install engines into cars that would soon have those engines replaced, the procedure allowed the Callaways to be built side-by-side with standard Corvettes without any interruptions or modifications to the normal assembly process in Bowling Green.

The B2K Corvette was unveiled to the media at the Milford Proving Ground during Chevrolet’s 1987 model-year press preview in June 1986. Media members were predictably delighted with the car’s performance. It would sprint from 0 to 60 mph in a scant 4.6 seconds, click off the standing quarter mile in 13 seconds with a trap speed of 108 mph and propel the C4 to a top speed of 178 mph. 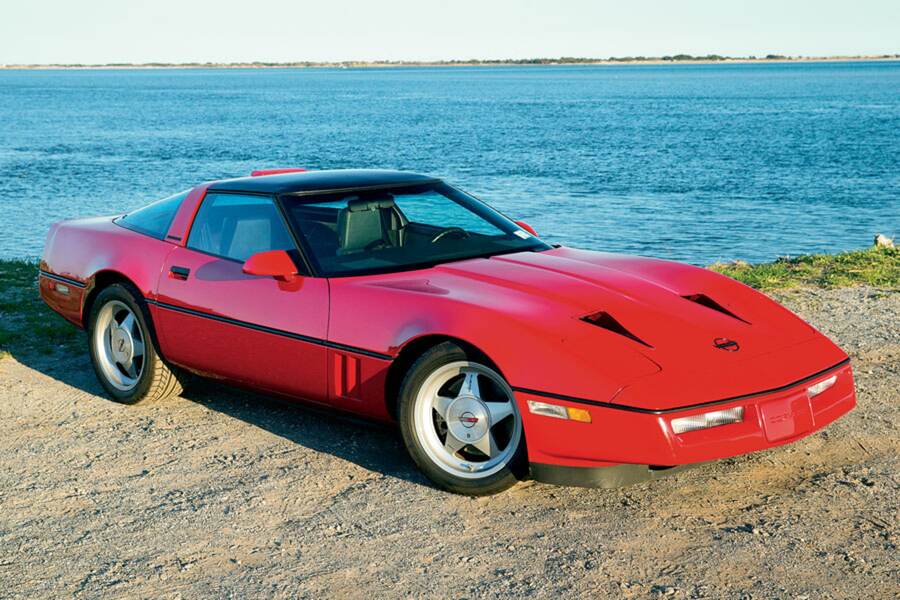 When the Callaway twin-turbo package was made available for purchase, potential buyers were equally impressed and reassured by the full factory warranty, but very few had enough disposable income to actually take one home. The option was priced at a whopping $19,995 on top of the cost of the car, which was $27,999 for a coupe and $33,172 for a convertible during the 1987 model year.

Our feature car is #81 of the 184 twin-turbos built in 1987. In addition to the turbo package, it features a number of other options, including RPO-code FG3 Delco-Bilstein shocks ($189) and aftermarket 17-inch Dymag magnesium wheels, which were extra cost in ’87 but standard on B2K Corvettes in subsequent years. It was sold

new in Colorado to a man from Detroit, and came into the possession of the second and present owner, noted Callaway collector Tony Cardiello, in 2005. 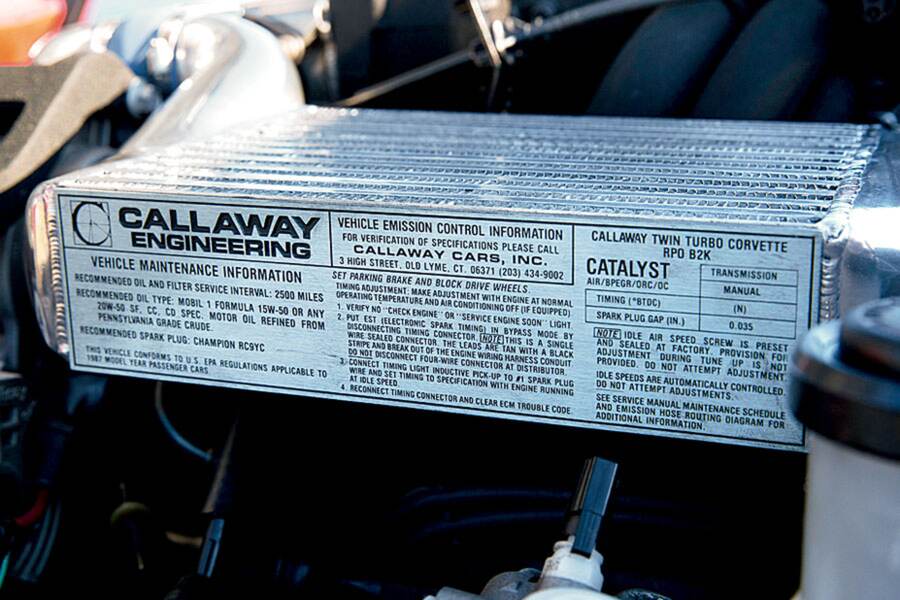 Cardiello first spotted a B2K at his local Chevrolet dealer in 1987. “I really liked what I saw, but the price tag didn’t seem to make much sense at the time,” says Cardiello. “The Callaway option almost doubled the price of the car!”

Though he couldn’t pull the trigger in 1987, Cardiello’s mind was set in motion. He began researching Reeves Callaway and the cars his company built; the more he read the more he wanted one of them. “When I understood what made Callaway’s cars so special, I was thoroughly impressed,” says Cardiello. In 1991, he bought one—a ’91 CR-1, which was based on the C4 ZR-1.

Cardiello subsequently added a 1995 Callaway Impala SS, a ’98 Callaway Commemorative Edition Camaro, the Bright Red ’87 B2K shown here and, most recently, a 2012 Cyber Gray 25th Anniversary B2K Corvette. Of them all, the ’87 holds a special place in Cardiello’s heart: “It’s the Corvette that started the Callaway legacy more than a quarter century ago, and it’s the car that initiated my interest in Callaway.”

Cardiello regularly participates in rallies and car shows staged by the Long Island Corvette Owners Association, and says he still gets a big thrill from driving his ’87 B2K: “The whoosh of the turbos when I nail it always brings a smile to my face.” 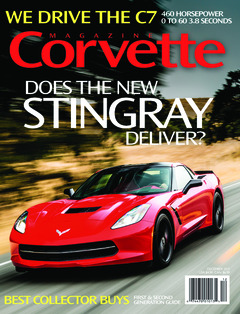